So much that they didn't let us up the mountain to train so we had to do our lessons indoors. Then on Saturday the 16th July Treble Cone opened the mountain and everyone turned up. Not only was it a weekend, it was the middle weekend of the school holidays, plus it was opening day with a promise of freshies for everyone. The queues were horrendous!

For those of us training with the Rookie Academy it was our final day of training before the Level One exam, and most of the trainees' first time to see the mountain covered in snow and ride a few trails. Everyone was pumped to be experiencing skiing the mountain at last, not to mention that glorious view... 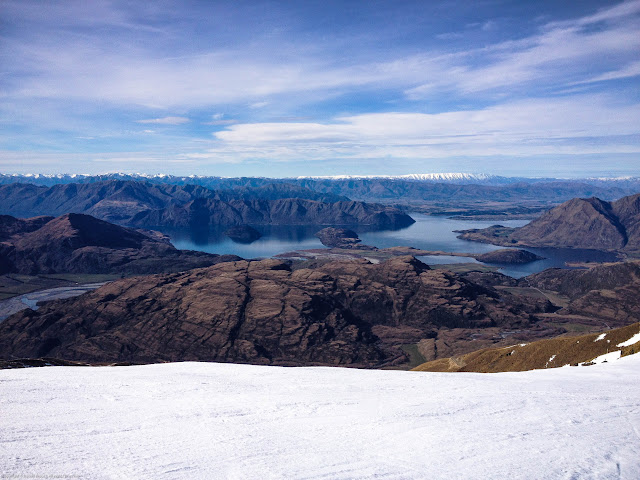 Sunday was an early start, as it was Day One of the exam. Our examiner, Sem, was a dynamic lady from Cardrona, who took us through our paces, teaching us about the teaching model we'll be using to teach skiers, and working on those wedge turns again. Not to mention our athletic stance. I am beginning to hate those two words....

Day Two was a chance for us to earn some marks, teaching a (non skiing) movement to the group using the teaching model we'd learnt the day before. I chose to teach my group how to uphaul a windsurfing sail, others taught fencing, golf swings, tennis serves, and even Bollywood dancing! It was a fun day and most of us got good positive feedback. One of our group, however, was struggling.

Our group of eight consisted of 7 Rookies and one 17 year old from Auckland. Although some of the Rookies are as young as 15 and struggle with remaining focused, this young man in our group showed no focus and very little application throughout the entire five days. All of our guys tried hard, despite nerves and wandering concentration, whereas this young chap just cruised along with little insight into the fact that his behaviour was so immature that his ability to be responsible for young children was highly questionable.

Sem was brilliant, always providing us with constructive feedback and really putting in 200% to help our struggling lad get over the line. As the teaching sessions involved us teaching each other, we all tried to be as helpful and attentive as possible when it was his turn to teach, but really, the lad had no idea what he was doing. When I asked him on the final day why he was doing the exam he scoffed that he was doing it to be an instructor, why else would one do it? Others in the group stifled their laughter as he'd actually shown no inclination throughout the week to actually learn the material required to pass the exam.

Day Three we taught a section of ski progression to each other. Level One instructors can only teach from first time to wedge turns, so we again spent time working on those, as well as improving our parallel skiing technique.

Day Four we pretended to teach a bunch of kids, using games and play to introduce the various movements of skiing. Back at the hostel I'd asked our resident 9 year old girl what kids her age were into, so Miranda and I based our lesson on teaching kids how to ski in a straight line with an athletic stance using the theme of zoo animals. Thanks Elsa!

Day Five we had to prove we had enough ski form to demonstrate the skills we were teaching. We had to demonstrate good form at rounded wedge turns - you should have seen the steam coming out of my helmet with all the concentration required to do this - and parallel turns with a pole touch. By lunch time we were done. A massive snow ball fight followed....

Only our young Auckland lad had to redo one of his teaching sessions, and Sem chose four of our group to be his students. Miranda, Kit and I weren't chosen, so we got to free ski for the first time this season. I took the gang down Cloud Nine and Superpipe, both nicely loaded with windblown dry snow, and the first time I'd skied them in piste skis rather than my fatter twin tips. Happily, that wasn't a problem. Then I took Kit over to the viewpoint over Matukituki Valley, then back down to the plaza where our marks and presentations were happening at 3pm.

We all passed, except for our Auckland lad, but that wasn't a surprise. He didn't deserve to pass and I only have praise for the way Sem, Stephanie and the NZSIA really tried to help him get through. But the lad needs to grow up a bit, and learn that without application, there's no reward.

So I'm now a Level One Ski Instructor. Who would have thunk I could have gone this far? But then again, I really had no choice. My usual ski coach and mentor for the last few years, Heidi, has become an instructor trainer and examiner herself, and is getting employment outside the normal ski school. I'd either have to find a new ski coach, or become an instructor....

So here I am with Sem and my certificate. 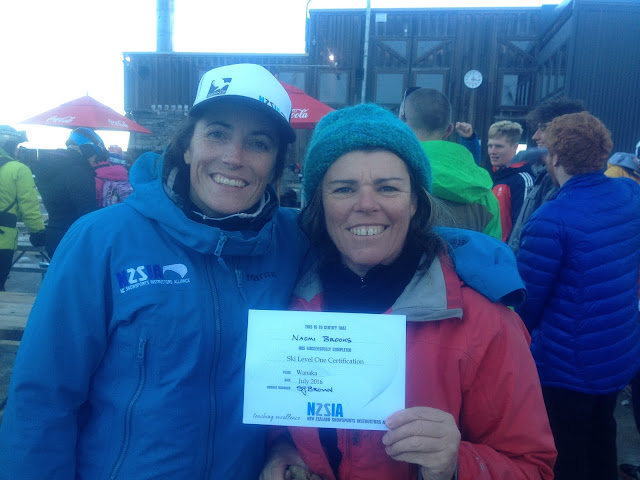 I arrived in Christchurch on 29th June to positively balmy weather. It's supposed to be winter, but New Zealand is experiencing warmer than usual temperatures, meaning all that snow that fell in May has melted. Oh dear! 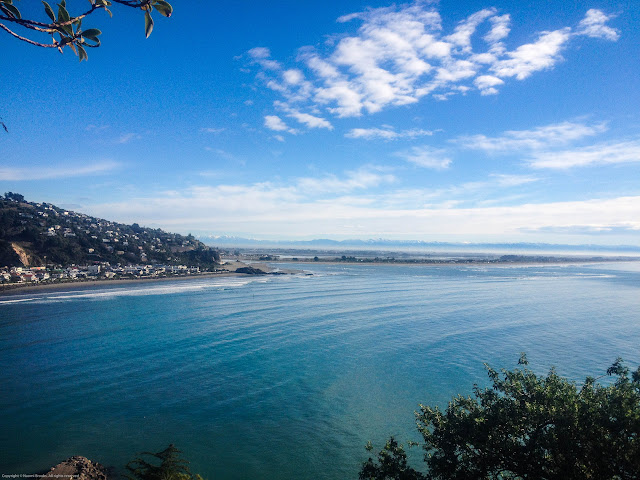 Never mind, it was great to catch up with friends in Christchurch, including ski buddy Sonja and husband Chris, who kindly stored my skis and a few bits and pieces for the last nine months in their garage loft. I stayed with Yuri and Ollie, went for some glorious walks along the coastline from Taylors Mistake, and visited a craft market where I bought the most elegant Oliver Twist wooden bowl. It's hand turned, from a piece of Rimu rescued from an earthquake demolition. Something beautiful out of all that destruction... 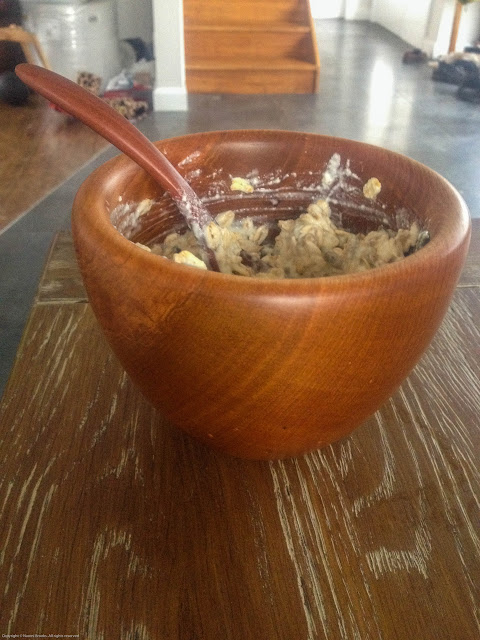 As there's no snow most of the ski fields are yet to open. The large commercial fields have opened, relying on artificial snow to keep their trails skiable. But off piste? That's a no go...

None of the smaller ski fields between Christchurch and Wanaka were open, so instead of driving down via Tekapo I decided to head down the east coast and visit Oamaru. Oamaru has an old Victorian era harbour precinct and some stunning sandstone buildings. It also has some interesting galleries, antique shops, and a couple of penguin colonies. 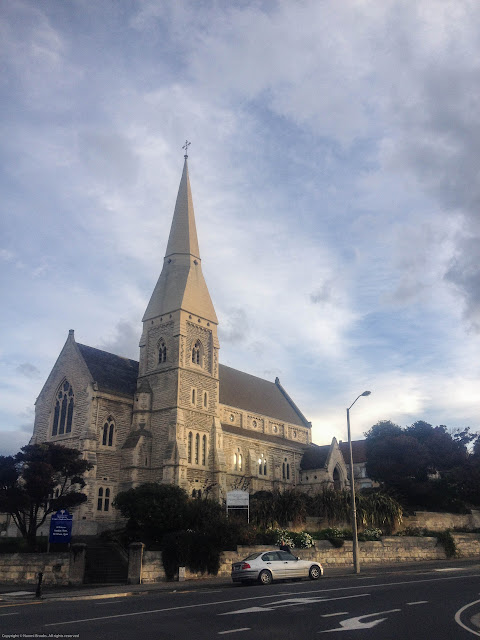 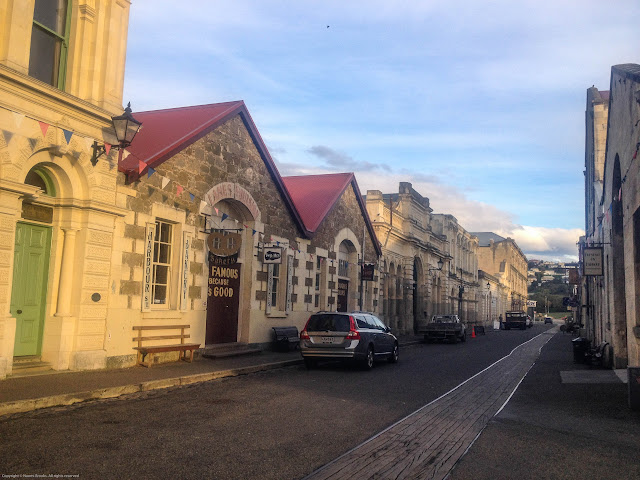 As I was driving along the coastline, the town reminded me of somewhere. There was a perfectly nice beach with a railway line alongside it, a road, and a whole lot of buildings facing the other way with a main business street and frontage facing away from the beach. Yep, here was Geraldton's doppelgänger. 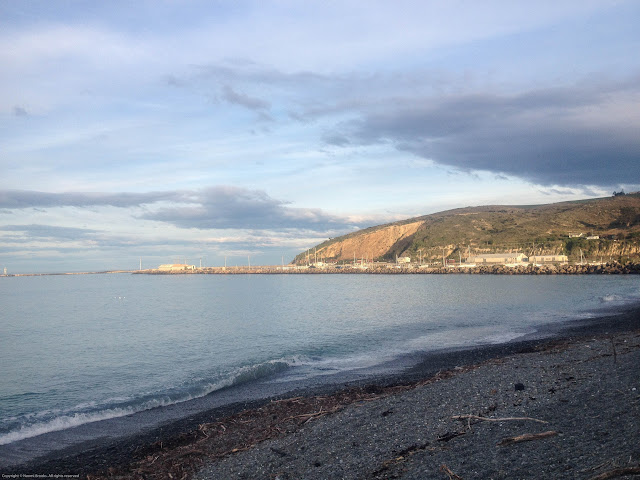 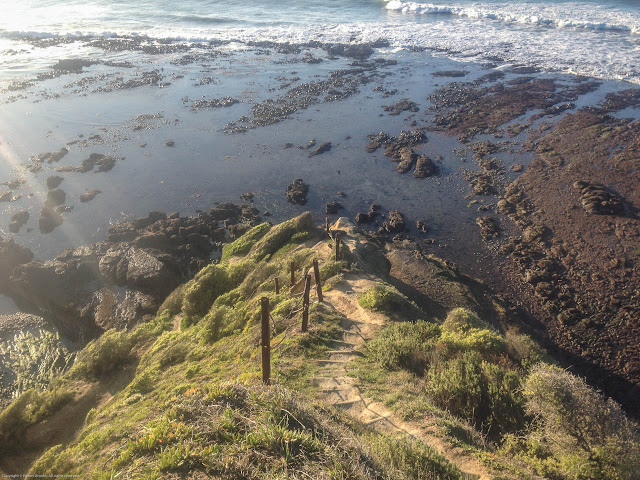 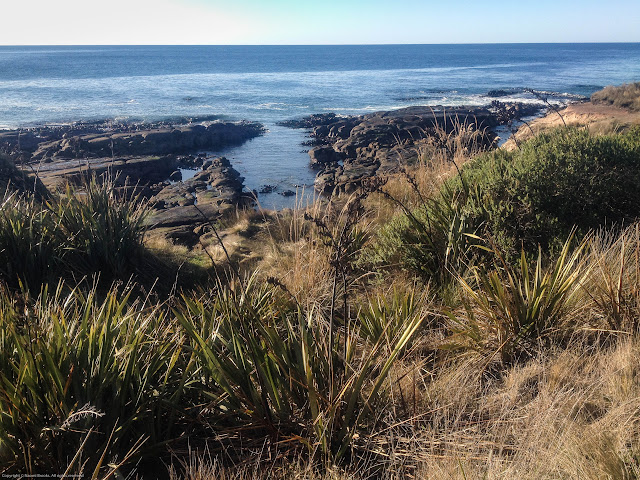 After a night in Oamaru I headed up the "pigroot" to Central Otago. This road was the original road taken to get to the Goldfields from the coast, until they built the railroad further west. It's a scenic road, and being a fair way north of Dunedin, doesn't get the traffic that the newer highway further south gets. And it was a glorious day. 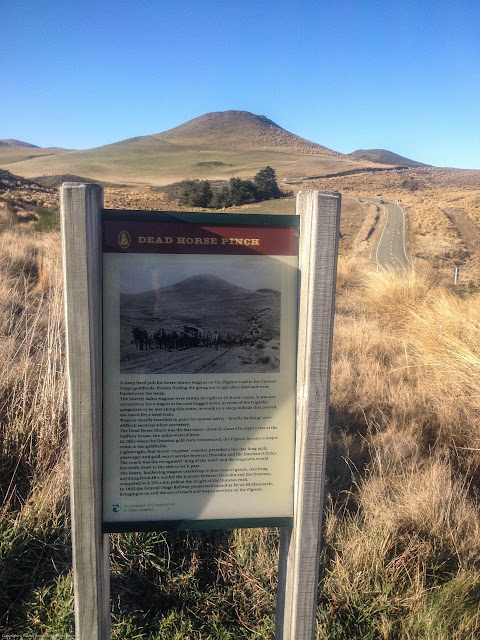 Up on the Central Otago Plateau I headed through Ranfurley and turned off to visit St Bathans. This is an old gold mining town, that has a flooded sinkhole in the middle of town called The Blue Lake, which makes for a pleasant tramp around on such a sunny day. 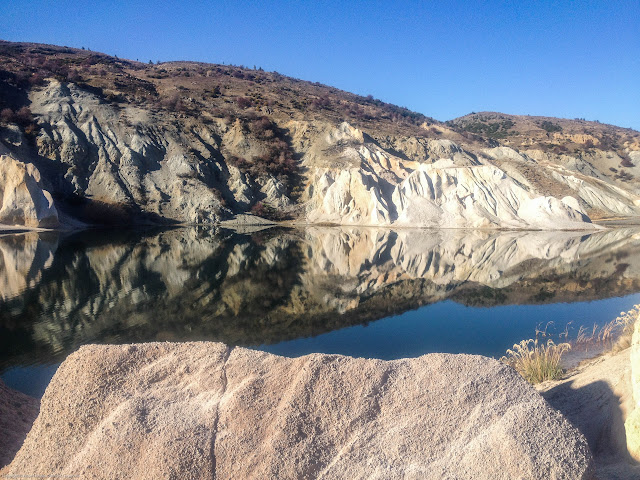 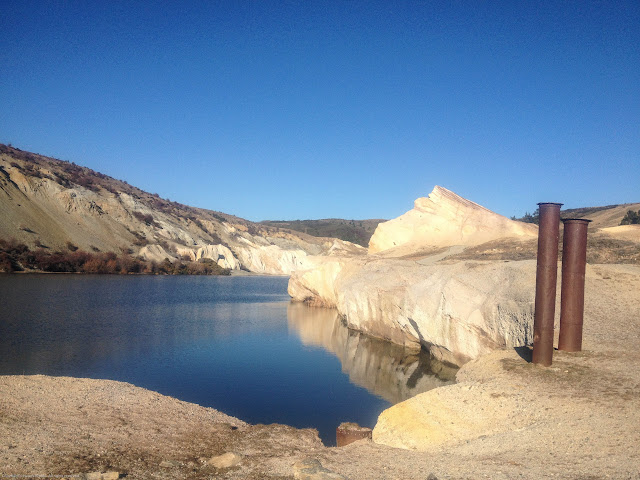 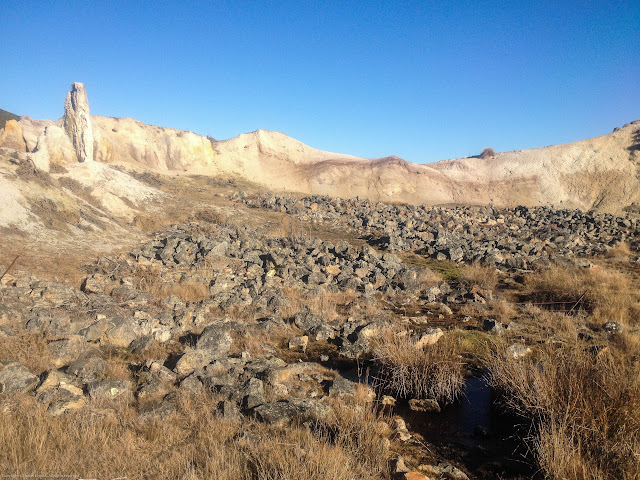 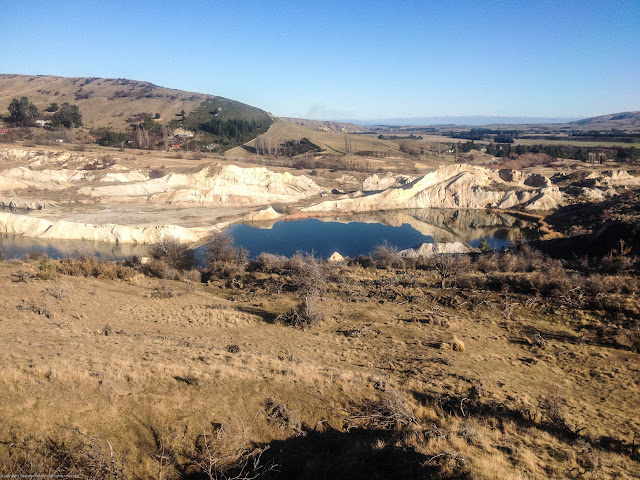 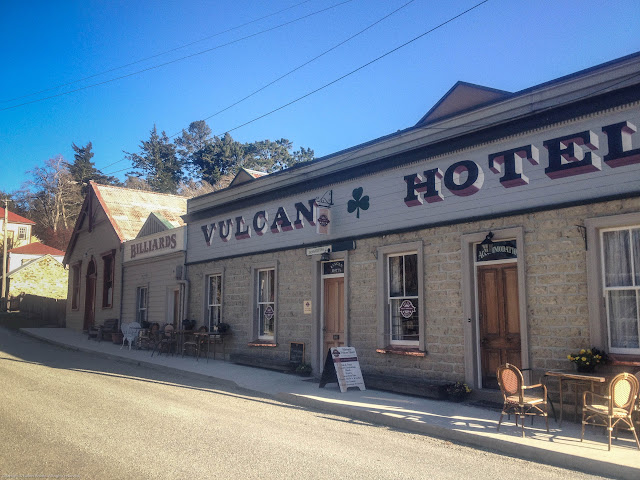 Then I headed to Wanaka, checked in to my hostel for the winter and worked out what I would do until the mountain opened. 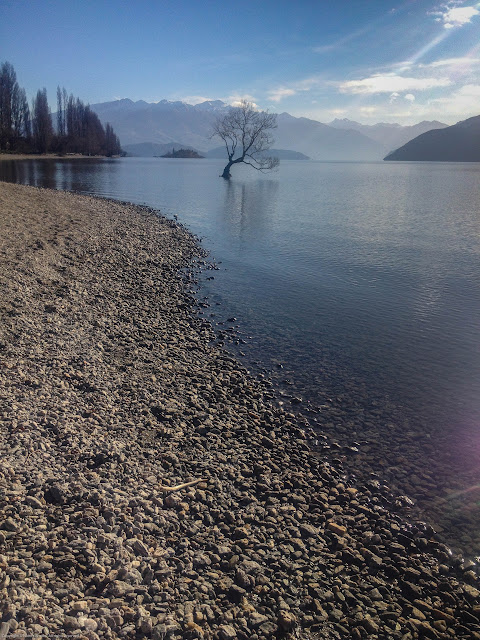 I'd come here to do a ski instructor course, so rather than wait a couple of weeks, I spoke with Dean (one of the Rookies managers) and got myself fast tracked on to a course that had already started, with the plan to do my Level One exam next week. The baby slope at Treble Cone was open, and this was where the training was going on. A perfect environment for learning how to do wedge turns.

For the first time in my life I learnt to do wedge turns. I'd not had lessons when I first started to ski, and learning to do wedge turns slowly and accurately, with precision, takes a considerable amount of effort and concentration. Everyone was amazed at how hard it was to get these right, mainly because we've all developed bad habits that need to be broken. And nobody but instructors spend more than a few weeks of their entire time skiing wedge turning before progressing to learning parallel turns. Learning to be a ski instructor is like learning to ski all over again. Which is one of the main reasons I'm doing the course, so I can ski better.

We're expecting some decent snowfall in the next 24 hours, and more on the weekend, so just hopefully the rest of the mountain will open soon. Meanwhile I'll be on the baby slope practising those wedge turns and doing my exam. After that, I'll get a chance to do some free skiing before starting training for my Level Two exam.
No comments: