The time I almost died

It was the day after my 25th birthday. I was in Thailand, on a scuba diving trip out of Koh Samui. A raggle taggle group of Europeans on a converted wooden fishing boat made the 2 hour crossing to Koh Tao.

Koh Tao is a small island northwest of Koh Phangan, Samui's northern cousin where people went to smoke weed and drop out for a few weeks. Full-moon parties had yet to be invented. Koh Tao wasn't on the tourist radar, although it had a handful of small family run bungalow operations scattered around the island. The afternoon ferry from Samui would dock and the bungalow owners would vie for the trickle of customers, load them in their runabouts and motor off to hidden bays.

We were staying in town, which was really just a dusty track with the ferry jetty, a cafe, a restaurant overlooking the water and a few houses. We stayed in a large wooden shed, made up of multiple bunk beds surrounding a central area of tables and benches. An outhouse had a squat toilet and a large water container for showering. Huge rats roamed the rafters and the calls of a thousand geckos lining the walls were deafening.

The shed was our home for 2 nights, our days being spent diving the reefs around Koh Tao. The whole dive operation was run by an older Austrian man and his much younger English girlfriend. The shed was under the care of a rather handsome young Englishman, who was painting it in exchange for free accommodation and dive master qualifications.

Over the 3 days we enjoyed some wonderful diving on pristine reefs, with lots of fish. There was no other dive operation in business on the island, although some of the bungalow owners would take their guests snorkelling on the more shallow reefs. With our boat we were able to take advantage of some of the deeper terrain, and also to do some night dives - one aspect of scuba diving I really enjoy.

Said Englishman would sit on the roof of the boat between dives, and I too would climb up the side of the boat to talk with him and adoringly appraise his good looks. I'm pretty bad at picking up guys, but it's not from want of trying! This wish to spend time in his company was my undoing.....

Returning from the night dive on the second evening, the ocean was quite choppy and it was a dark night. After storing my gear I went to join my friend on the roof. Instead of clambering up the side of the boat as usual, I decided to use the ladder. I mean it was there, why not use it?

Unbeknownst to me the ladder was simply hanging on the side wall, it wasn't secured to anything, and as I climbed it in the rolling seas it simply dislodged itself from the roof and fell. The deck was only a couple of feet wide, so in a quick thinking feat of survival instinct I twisted around as I fell, somehow landing on the deck rather than in the water. I hit my head and was momentarily knocked out.

I didn't lose consciousness for long, probably only a few seconds, but it would have been enough had my fall been into the watery abyss. Having survived that I looked to see what injuries I had sustained. At first I thought I'd broken my leg, but the gash down my thigh and the huge swelling underlying turned out only to be bruising. My face, however was another story. Something solid had smashed up under my chin, causing a large laceration and a few broken teeth, but luckily again, my jaw was intact.

I was taken, limping and bleeding, to the local hospital on the island. It wasn't really a hospital, just a one room clinic, and since it was night and there was no generator running, I was stitched up by torchlight, using a needle and thread dipped in alcohol. There was no anaesthetic. I returned to my rat infested bunk feeling very sore and sorry for myself. But thankfully alive.

It brings a shiver to my spine even now, to think how close I was to not living past 25. But it didn't stop me travelling. The injury caused me to extend my stay in Thailand and return to Koh Tao for a week of recuperation. That week I spent back on the island hanging out with the cute Englishman and a Scottish lass, eating with the locals, strolling along the beaches, and smoking a lot of weed, was probably one of the most enjoyable weeks of my life.

It's a reason I will never go back to Koh Tao, now that it's a crazy dive mecca full of backpackers and noisy long tail boats, because it holds such a special place in my heart. And although it was one of the worst experiences of my life, it also ended up being one of the best. I don't want to ruin that.

One blog I like is Chicky Bus, written by an American lass named Lisa, who teaches ESL and travels in her holiday breaks, mostly in Central America but also she's been to the Middle East and a few other destinations. She hasn't made it to Asia yet, but she plans to soon.

Lisa wrote a great article about returning from a trip, missing a particular food you'd enjoyed so much and trying to replicate the taste once back home. For her it was the papaya milkshakes she had in the Dominican Republic. Here's her article on the subject.

I really identified with this, given my total addiction to Asian cuisine. On my last couple of trips I've even returned home with a few recipe books. I don't have a favourite dish, there's just too many to choose from, starting with Nonya cuisine, Vietnamese Bo Pho, Beef Rendang, Chicken laarb and green papaya salad just to name a few.

I regularly make a wonderful Assam Fish, a nonya dish where the curry is made from scratch, and I once spent an entire day making Beef Pho, which was unbelievably delicious but far too much effort to make on a regular basis. Trust me, the taste is all in the stock, a whole day spent boiling the bones to make it! Green Papaya Salad is pretty easy, but I'm yet to make a good Rendang.

But seeing as I haven't been to Central America, and I've currently got a papaya that's just ripened up to a gorgeous orange hue, I popped into the IGA for a can of evaporated milk (note Carnation) and slavishly followed the secret recipe on Lisa's blog.

Starting with the main ingredients... 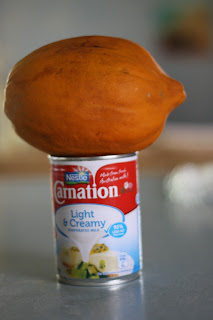 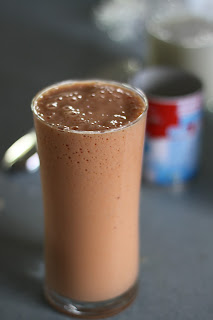 Thanks Lisa, it's awesome. Who needs to go to the D.R. after all??
2 comments:

A rose by any other name...

I am technologically challenged, no doubt about it. But I try, and somewhere in amongst the trying I sometimes succeed, although not always without parting with more money than I needed to.

When it comes to the internet, and any technology relating to the internet, I can reliably inform those people beyond our antipodean shores that us Aussies pay a premium for everything. We pay 50% more for iTunes songs, movies and videos, some of which aren't even available here for months after their northern hemisphere release dates. Similarly we are locked out of American online stores for purchasing software, like Photoshop or Lightroom. Little wonder that Australians (with a meagre 22 million population) are the second biggest pirates in the world. Apparently 5 million Australians are at it as I write this!

Unfortunately, I'm so dumb that I haven't worked out how to diddle the system, and my own pirating efforts have been limited to purchasing cheap DVDs in Bali. Yeah, I know it's wrong but if they made it fair for us Aussies to purchase at the same price as Americans for instance (especially as our dollar is so strong) then less of us would be tempted. I've completely given up buying books in Australia, even purchasing hard copies and getting them shipped using Amazon is cheaper than going down to the local bookstore. But since I got the Kindle, paper copies are now redundant. Amazon, unlike Apple and Adobe, doesn't restrict access, meaning I can purchase from both the American and UK online stores. Thankyou Amazon, who cares if you want world domination, it's OK by me.

Another area that I think I've been diddled is custom domain names. If you cast your eye up to the internet address line you may just notice that I have changed my name. No longer am I a blogspot address, I've graduated to a dot com. Pretty cool hey?

Now I didn't realise that I could get a dot com domain name for just a few dollars a year, and unfortunately went and purchased myself a domain name from an Australian internet domain name company at some ridiculously overinflated price. Stupid me. Of course I didn't purchase a dot com au address, that would be sheer financial lunacy, as it's twice as expensive. Owning a dot com au is such a liability, I mean I know us Aussies think we're pretty exclusive but Geeezus!!

I've learnt my lesson, and when it's time to renew I'll jump ship to somewhere cheaper. At present I'm staying on Blogger, because they're hosting me for free after all, and I have absolutely no intention to turn my blog into a money making venture (like I'd ever be successful at that anyway?). Though it's gratifying to see a lot more people visiting my blog than just my mum! Even people I don't even know!!! Hi, nice to meet you.

So nothing has changed on the blog, just the name, but even if you are still using the old address, blogger will redirect you here anyway. Just so you know. And can congratulate me and all that.
No comments: