Nobody warned me about the wind

Last time I went to Dieng in 2010 I did all the usual tourist things: visited the coloured lakes, the Hindu temples, the mud pool crater at Sikidang, and got up early to see the sunrise from Mt Sikunir. I wrote about it here. 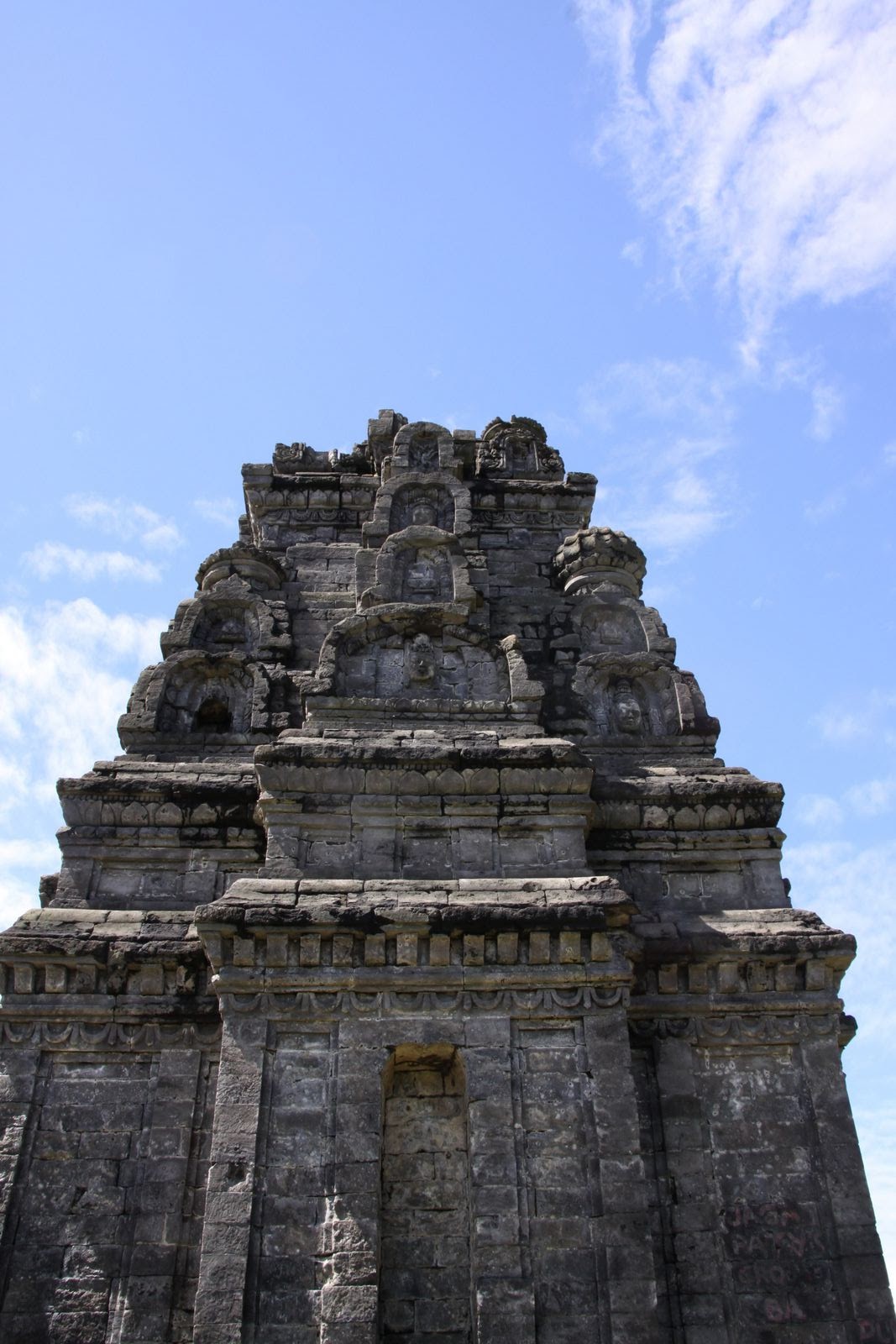 I really wanted to return to Dieng, because it was a sleepy little place, with entire mountainsides carved into terraces for growing vegetables, and there were more than just the few hot bubbling pools in the town area, there were others further afield. It's also got quite pleasant weather after the sweltering heat and humidity of the lower altitudes. At 2000 metres ASL it gets clear sunny mornings and then the clouds start rolling in from 9am, and you can usually expect rain by 3pm, sometimes earlier. In the late afternoon and evening it gets quite cold - you definitely need a jacket and a blanket on the bed at night... 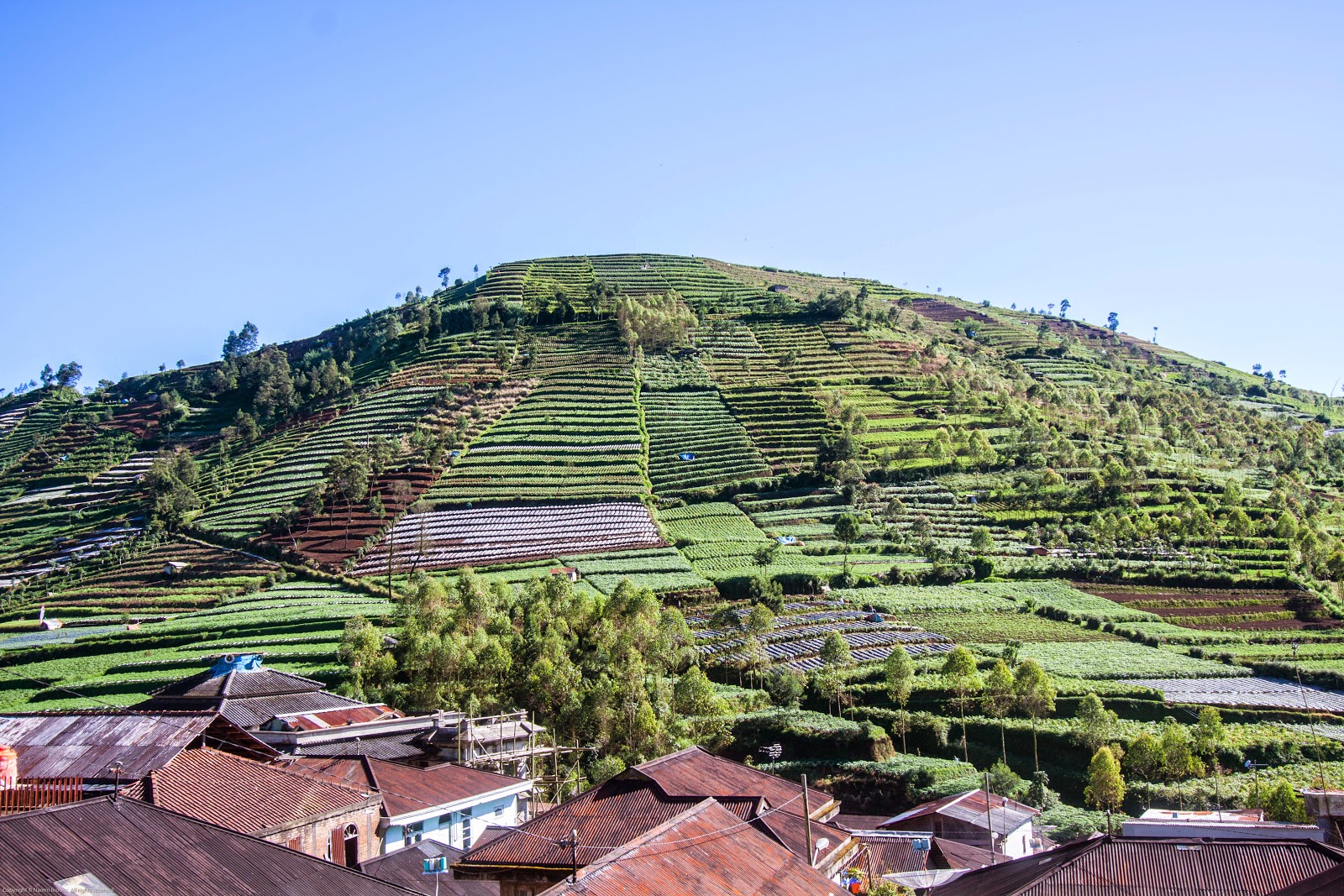 I arrived on 1st May, which is the start of a four day long weekend for Indonesians, so the place was hopping with people. No longer is Dieng the quiet backwater it was 4 years ago. There's more eating options, the homestays are cleaner and the hot water more reliable. But the Sikunir sunrise now needs to be shared with hundreds, rather than the six or seven I had back in 2010. Sounds like it's becoming the new Bromo!! 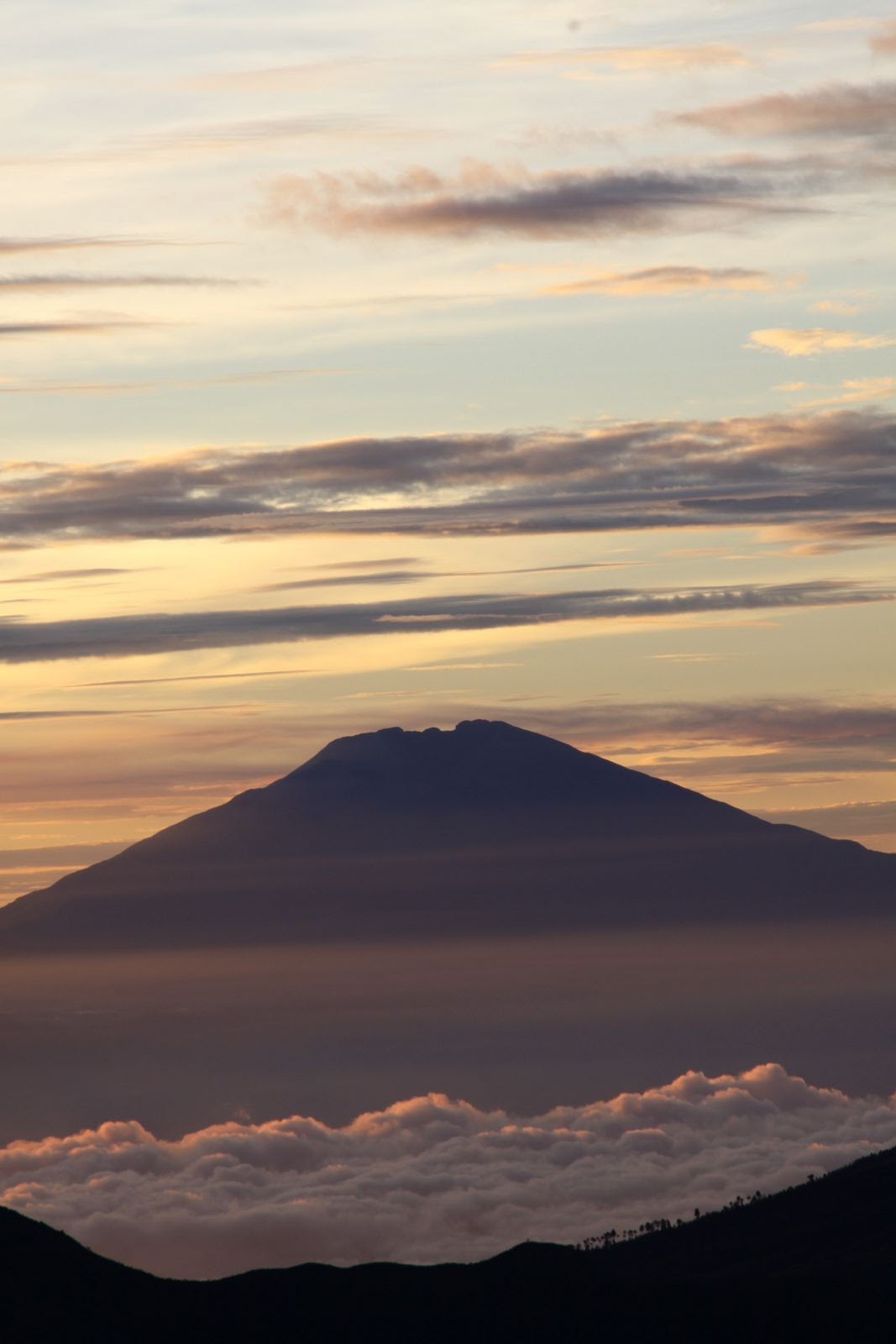 I had decided I was going to do a different sunrise option, to climb the highest peak in the area, Gunung Prau, and camp overnight for the sunrise. I'd stocked up on food in Wonosobo before I headed up the hill to Dieng, because there hadn't been many shops there last time. That too has changed. There's even an Indomaret!

My homestay only had a room available for one night, with Friday night fully booked, so my itinerary was set. Friday I would climb Prau. In the meantime I headed out of the village to visit Kawah Sileri, a steaming mudpool in a hollow about 5km out of town. It was a long walk up and down some steep hills, but the countryside with it's intensive cultivation, and the friendly smiling welcoming people, made up for any sore legs on my part. I'm really happy with my new walking boots, they haven't given me sore feet at all. 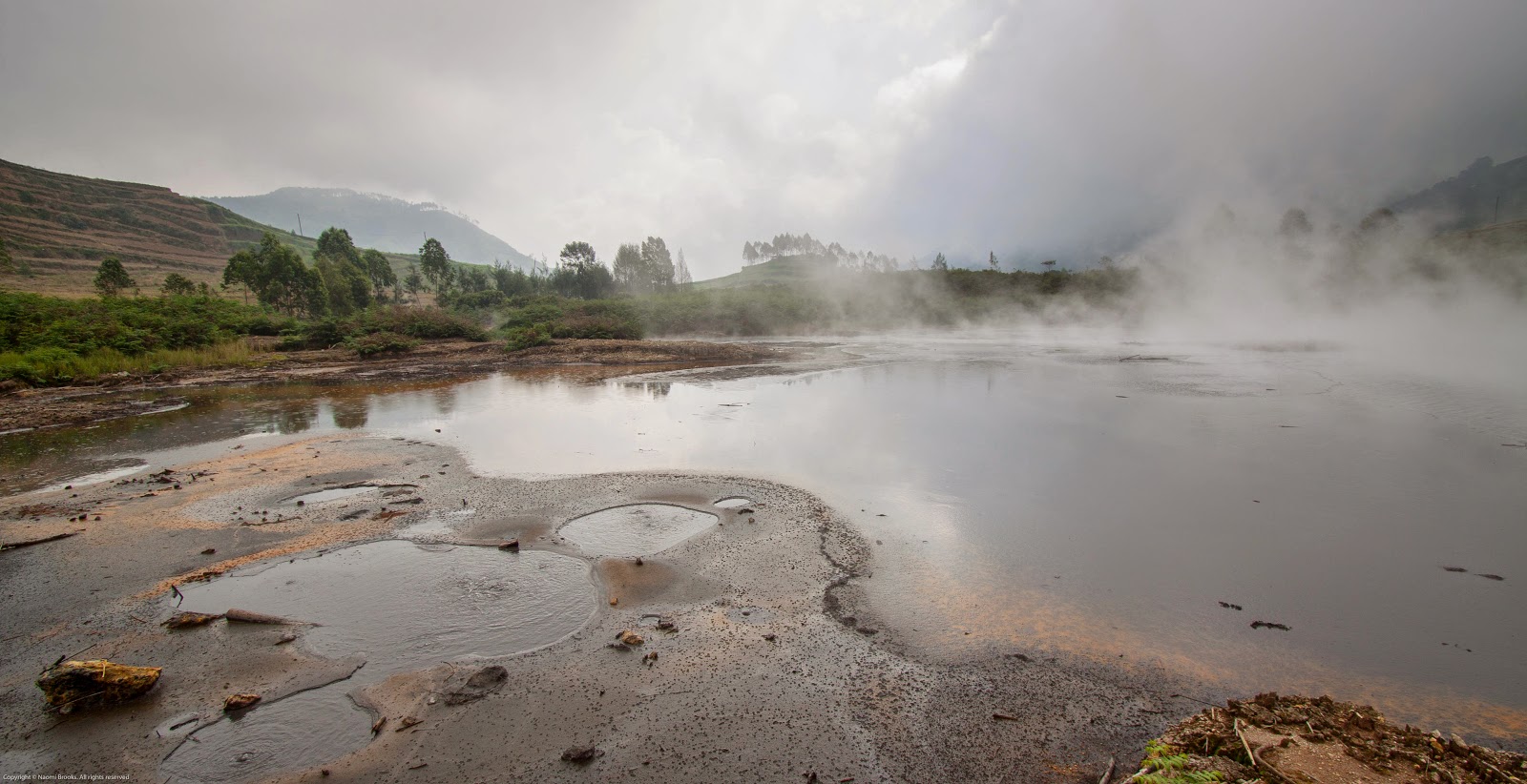 Back at the homestay were a motley bunch of backpackers, one French, one Belgian, one Israeli, whom I spent the evening chatting to and suggesting a few places they should visit, me being the old Indonesia hand. This is my sixth time in Indonesia and I still feel I've barely scratched the surface.

Friday morning I bought a little more food and topped up my water supplies before heading off up the hill. The walk actually starts in Dieng village and there's no need to have a guide. You simply just follow the path. I wasn't the only one doing the trek, I passed a few groups on their way back down, and another group on their way up. As it turned out this group joined me at the same campsite. 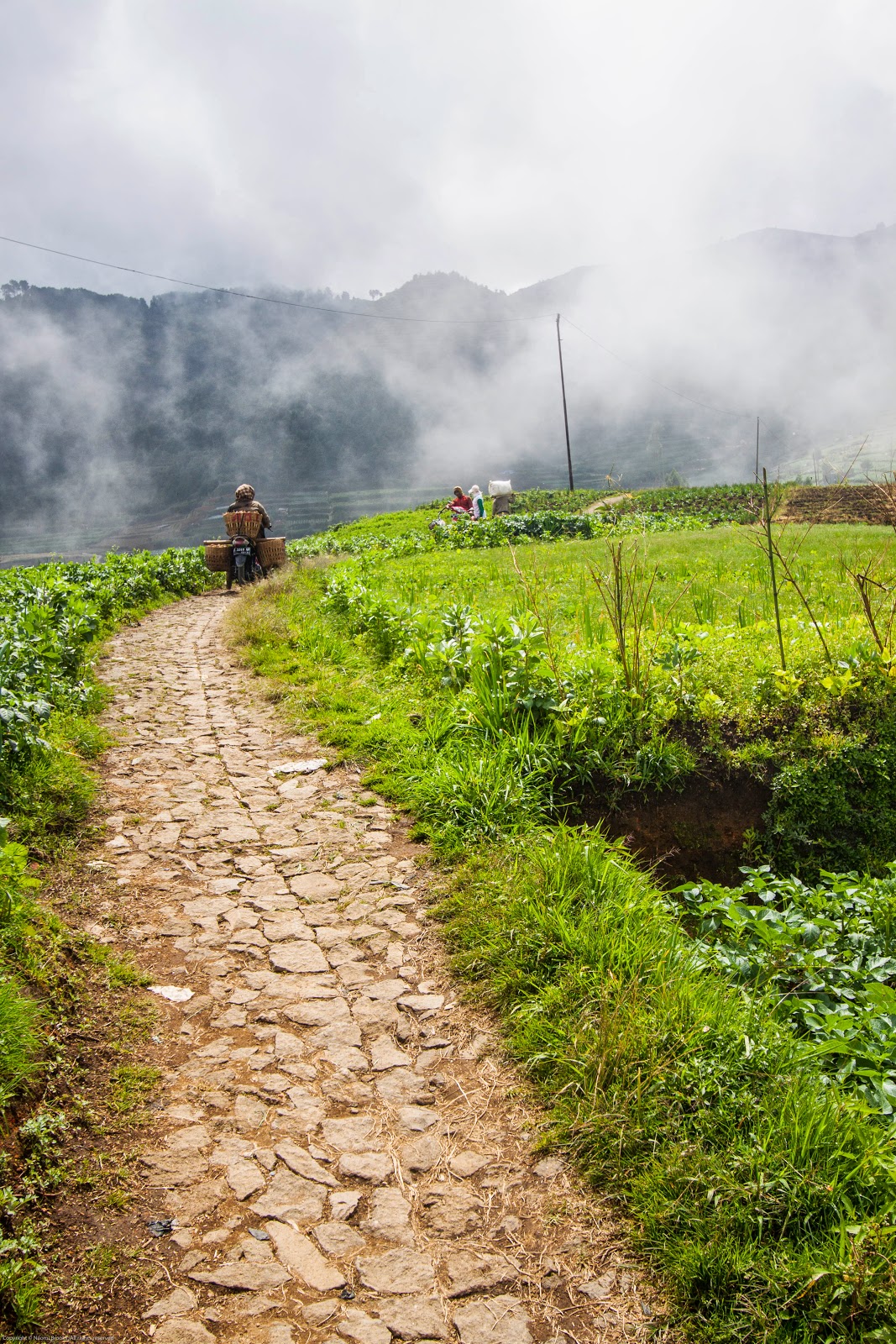 Once you reach the radio towers at the top of Prau, the hard part is done. The rest is a ridge walk, initially along a narrow bracken covered ridge which then opens up into a beautiful rolling landscape of green hills covered in wildflowers. It's known as Teletubbies Hill, seriously!! 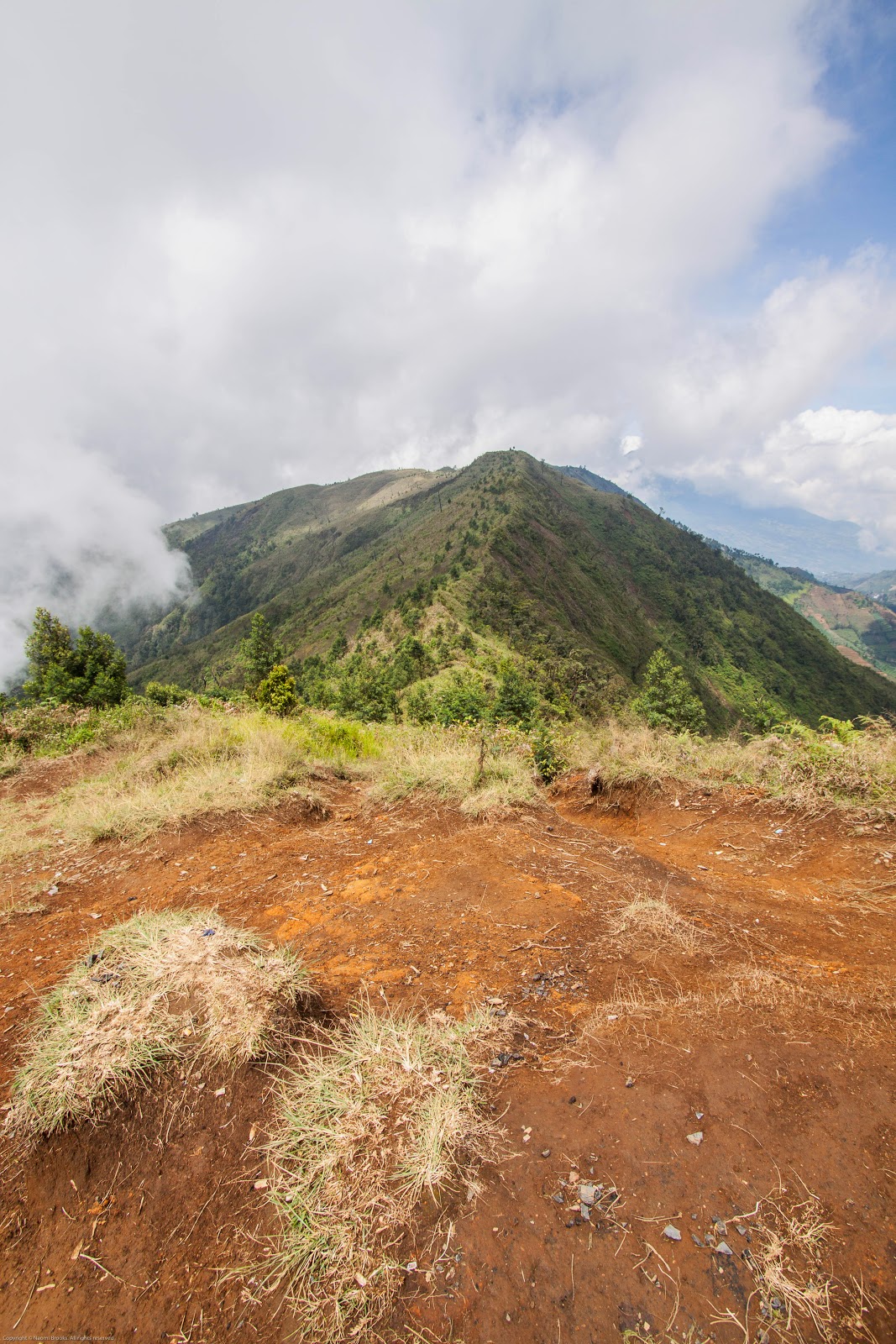 My immediate task was to find a campsite, which for me means two trees the right distance apart to hang the hammock. I spied a stand of trees and made my way there. The sun was shining, a gentle breeze was occasionally sending a whisp of cloud overhead, and the views down into the valley were beautiful. I pitched my hammock between the two trees best suited then cooked up noodles for lunch and boiled the billy for a cup of coffee. Ahh, camping is the best.. 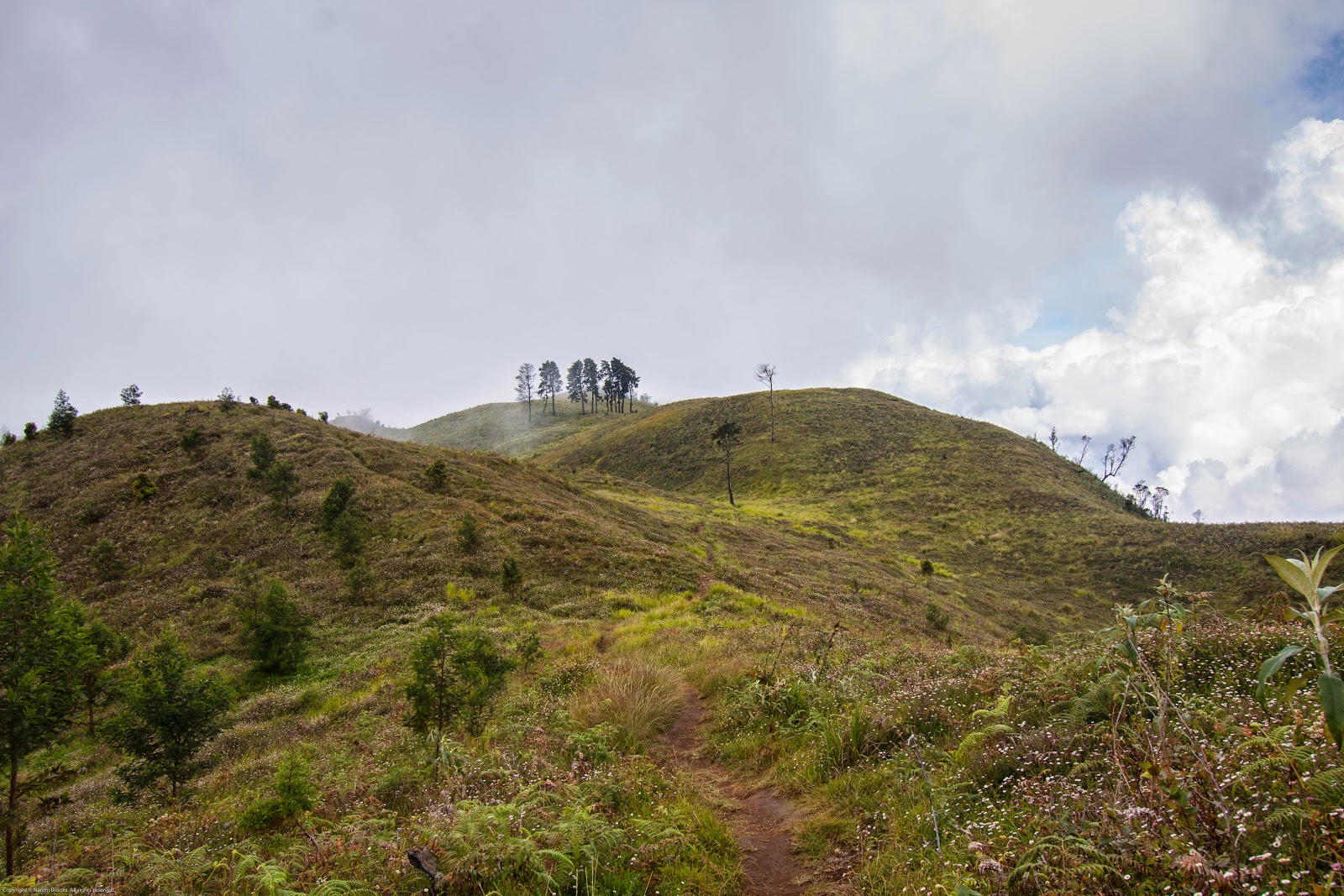 Not long after, the group I'd passed earlier arrived at my campsite and set up their tents. They asked me which way the wind had been blowing, a very pointed question it turned out, because wind is the big nasty up here on the hill. My hammock, sited where it was, was not exactly in the best position, but I had little choice: the trees were where they were... 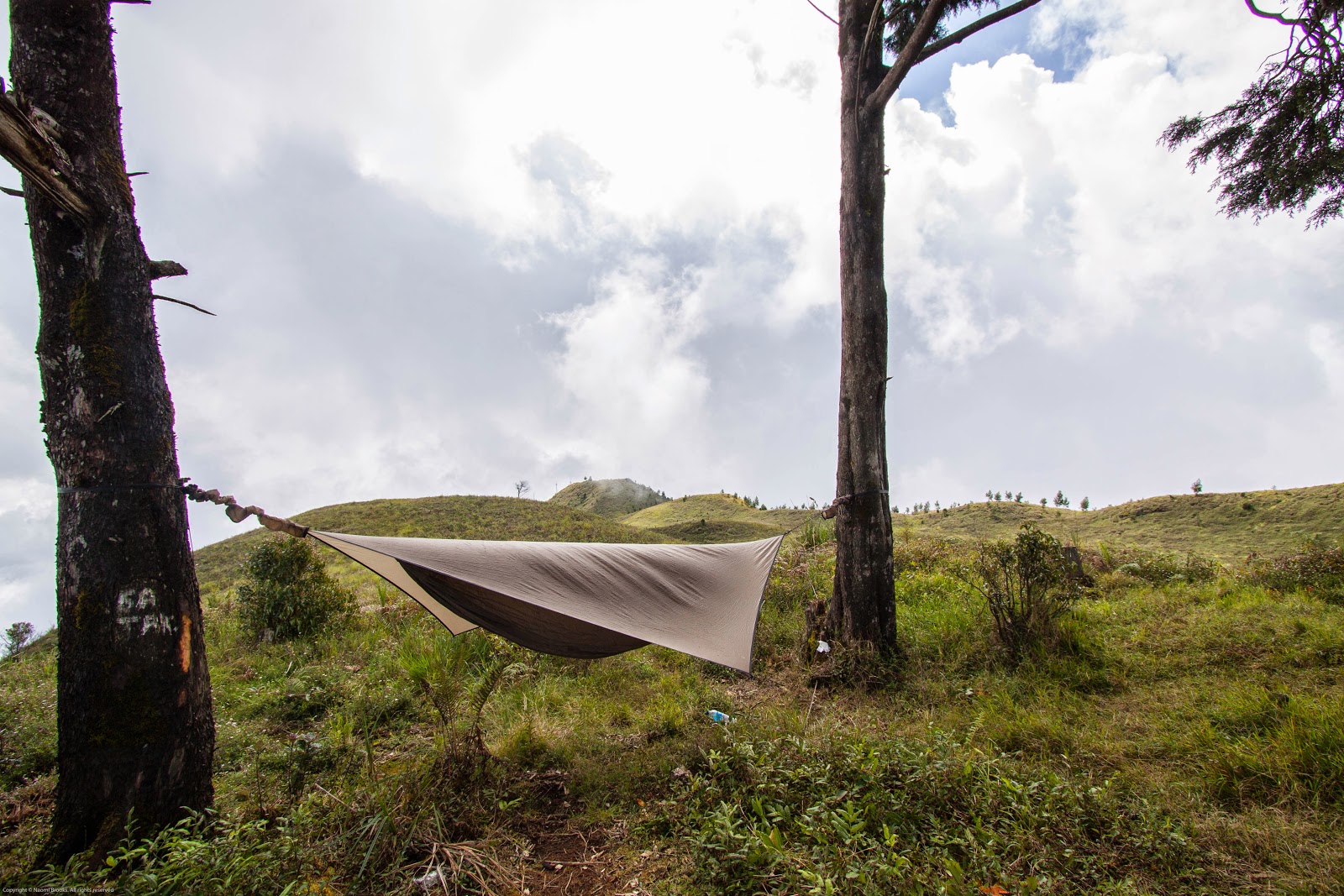 My new friends were from Jakarta, enjoying the four day holiday by camping before heading back home again. They'd spent the first night below the peak (where I'd passed them earlier) and planned to finish the ridge walk the next day. They offered me room in their tents, after looking with disbelief at my hammock. Mock me all you like chaps, I'm made of stubborner stuff than that. 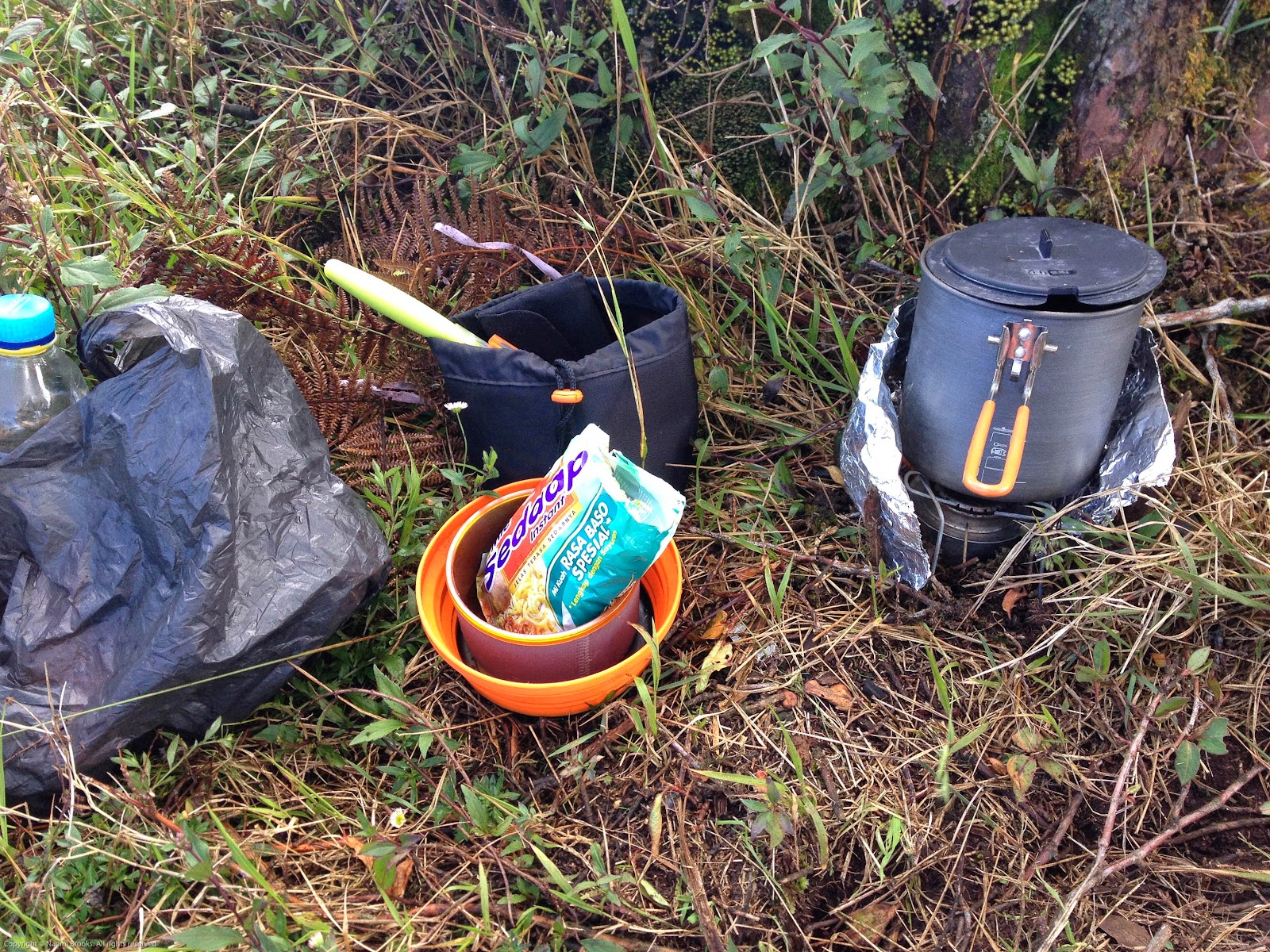 After learning from Gunung Papandayan, I was a little more prepared for the cold this time. I had the space blanket out underneath the sleeping bag, and wore more layers of clothes. I'd also purchased a fleece hat, in fact I looked like a teletubbie myself!! 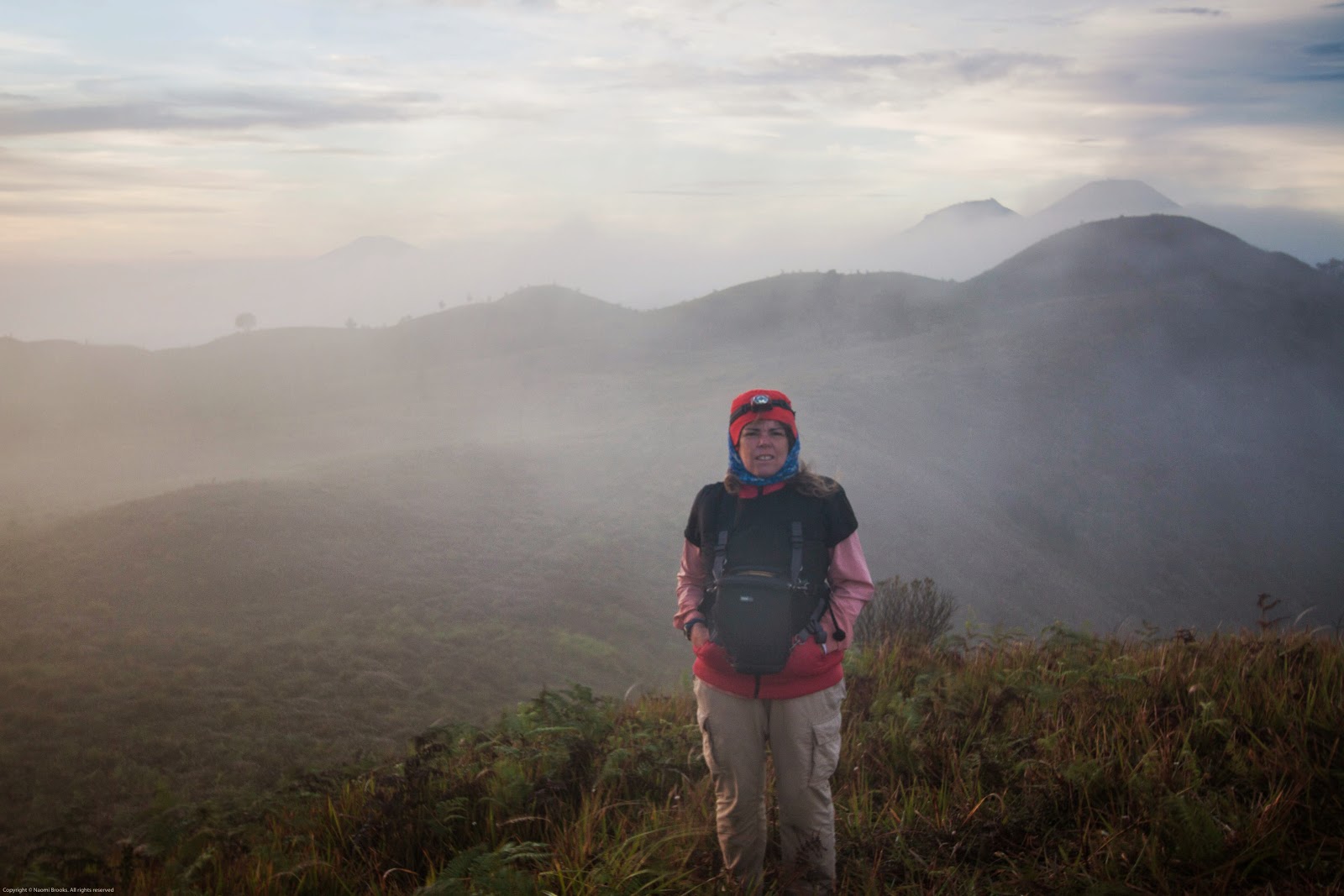 Late afternoon the wind started to kick in, bringing large banks of clouds flying over the ridge. The temperature dropped markedly and the layers started going on. I headed off to get some sunset shots then ate a hasty rice dinner and settled in to the hammock. Soon the thunder that I'd heard in the distance got closer, and overnight we were treated to a spectacular lightning show, complete with scattered rain showers, but the whole time this cold unrelenting wind persisted. My hammock fly rattled away, it was no match for the wind coming in underneath it, but it stopped most of the rain from getting me soaked. The water resistant covering on my sleeping bag helped too - in fact I was pretty warm all night despite the hammock getting wet. But the wind rattling the fly and the thunder and lightning made for a disturbed sleep. 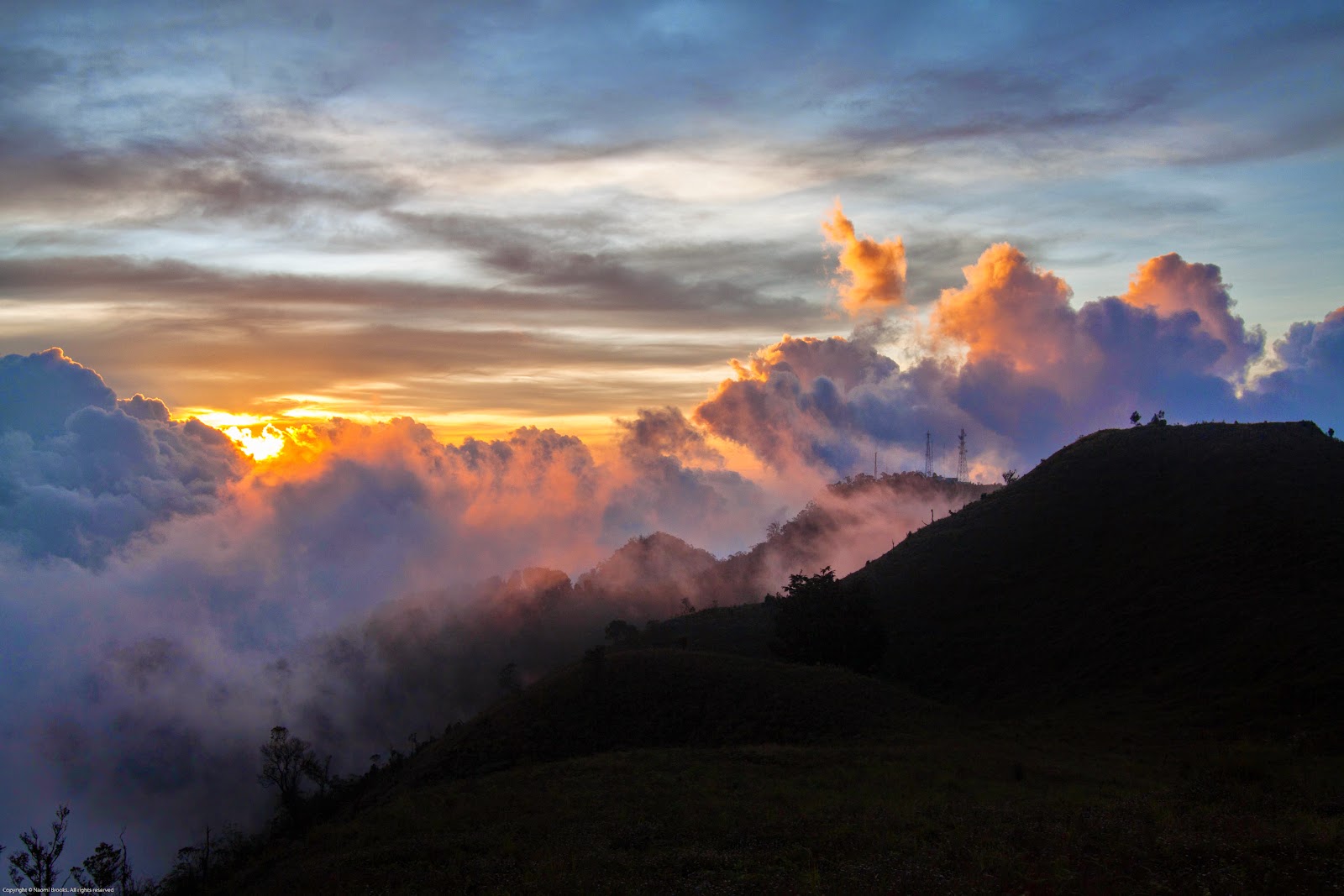 I set my alarm for 4 am, and was the only one to rise and head out to catch the sunrise. The rain had ceased but the wind was still driving through the campsite and my fingers were freezing when left out of my pockets too long. Next purchase: gloves!! It was pitch black as I made my way to a nearby hill I'd scoped yesterday afternoon, although the dark was occasionally illuminated by the now receding lightning. I set the camera up on the tripod and attached the cable release - which means I can press the shutter button from the warmth of my pocket! Then I started playing with the manual settings and different exposure times. Nice to have a smartphone with a stopwatch on it....

It wasn't a particularly spectacular sunrise - there was still too much cloud so the colours were muted - and the further peaks were mostly obscured from view. Later though, the sea of clouds cleared a little, and I was able to get a good panoramic shot showing Merbabu, Merapi, Sundoro, Sumbing and Slamet. Not bad!!

Then the clouds closed in again. My friends decided to pack up camp without breakfast and head back down the way they'd come. There seemed no point doing a ridge walk in whiteout conditions. I heartily agreed with them, but I'd been up earlier than them and cooked myself hot noodles and hot coffee before the inevitable packing up. The wind had dried my hammock completely once the sun had risen and the rain had ceased. I packed up leisurely and headed back, passing my friends numerous times on the descent as we each stopped to rest or say hi to other trekkers on their way up. Soon I was back at the homestay, a room acquired and a hot shower and an afternoon snooze enjoyed. I had quite a bit to catch up on. 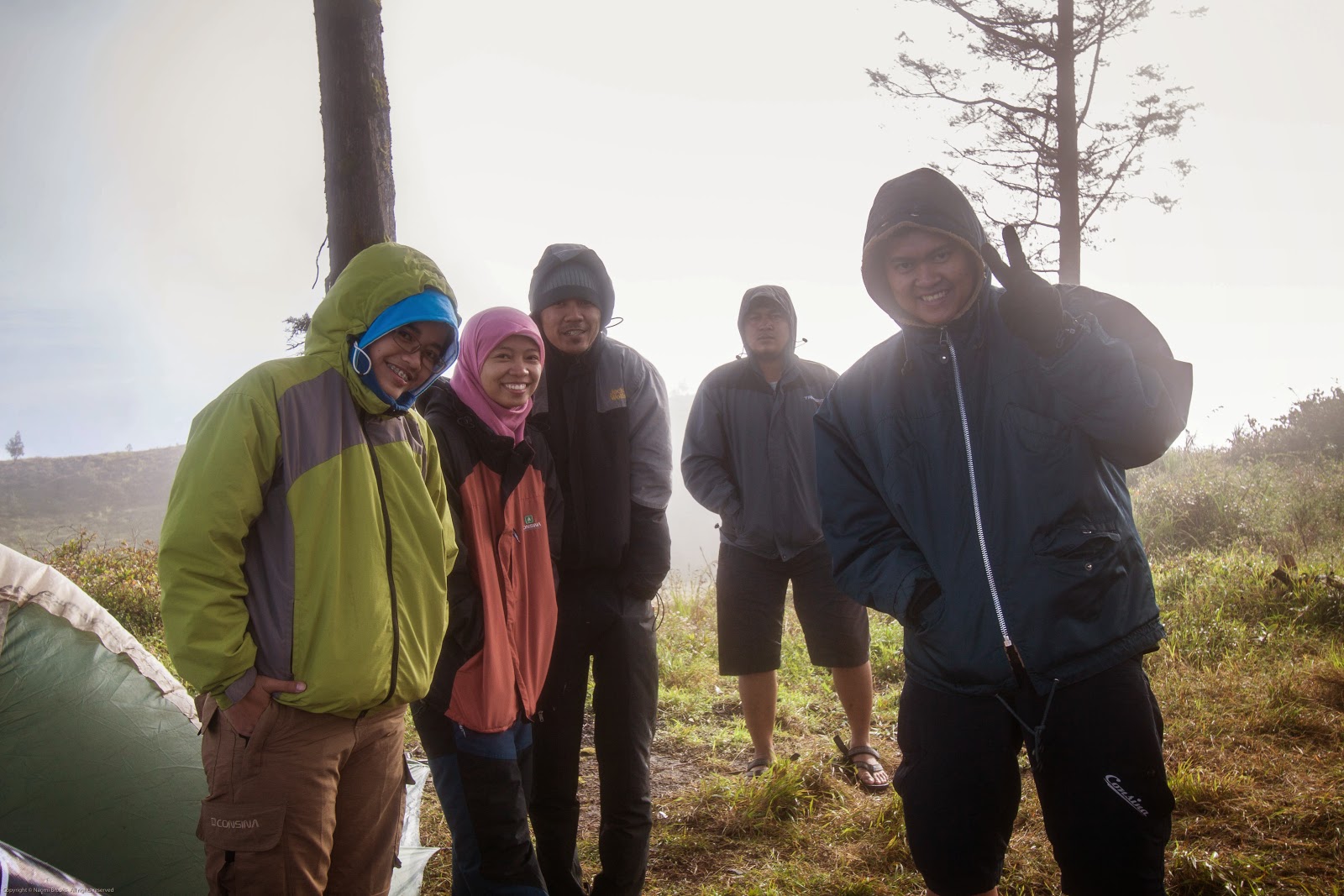 The next day I was up bright and early to head out to some further craters and lakes. These were 10km away so I figured I'd better head off as early as possible. I was pretty lucky, because I got a lift some of the way on Robbie from Wonosobo's bike, and the rest of the way in the back of a farm truck. What would have taken 3 hours to walk, only took me one! 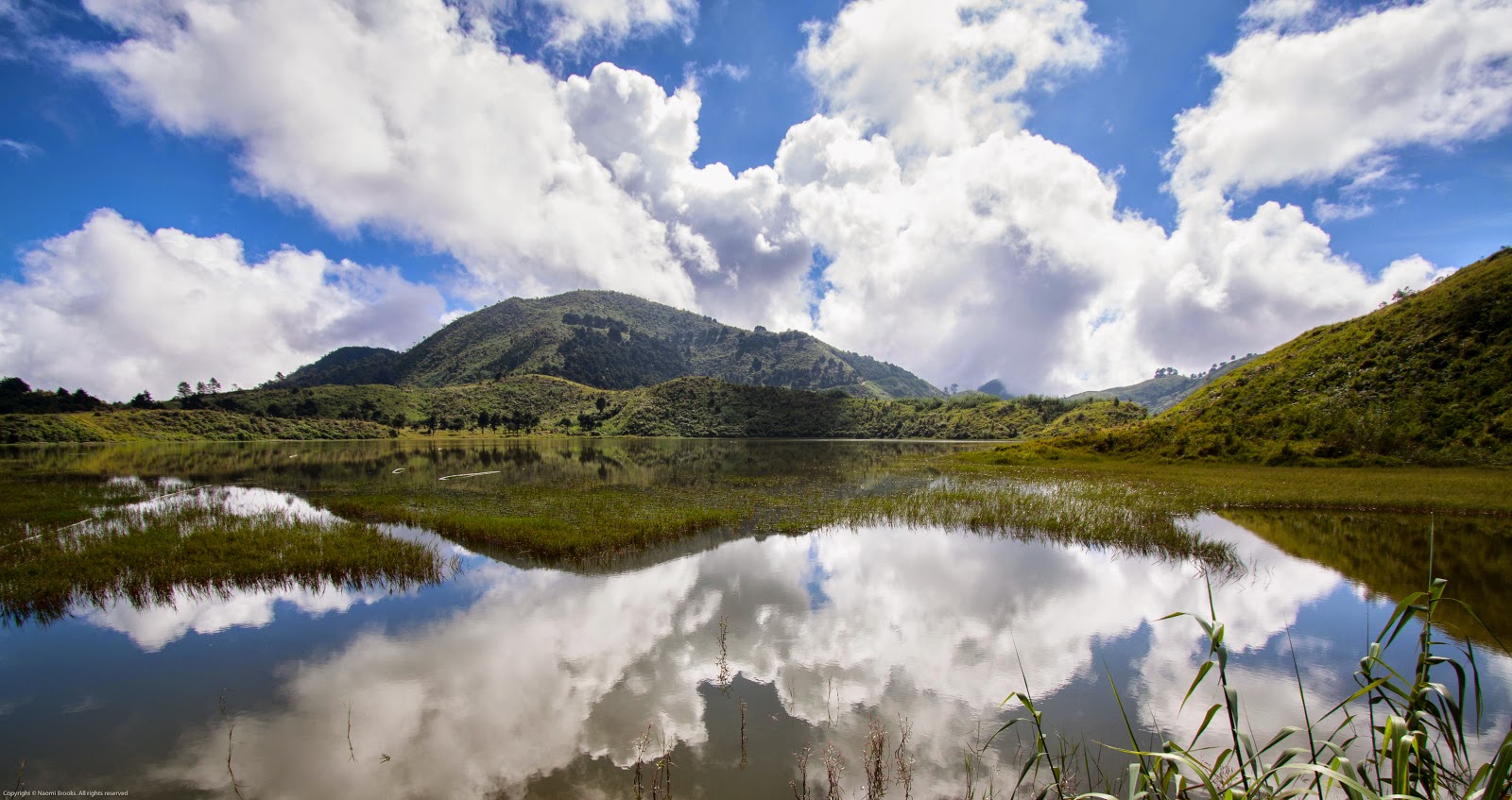 Lake Dringo is a pretty little lake perched on top of a hill. Well almost on top of the hill. I walked all the way around the lake and up a ridge on the other side, to discover it's the back of an entire hillside. So I jumped into the terraced vege patches and followed a pathway back down to the road near my next port of call, Kawah Candradimuka. 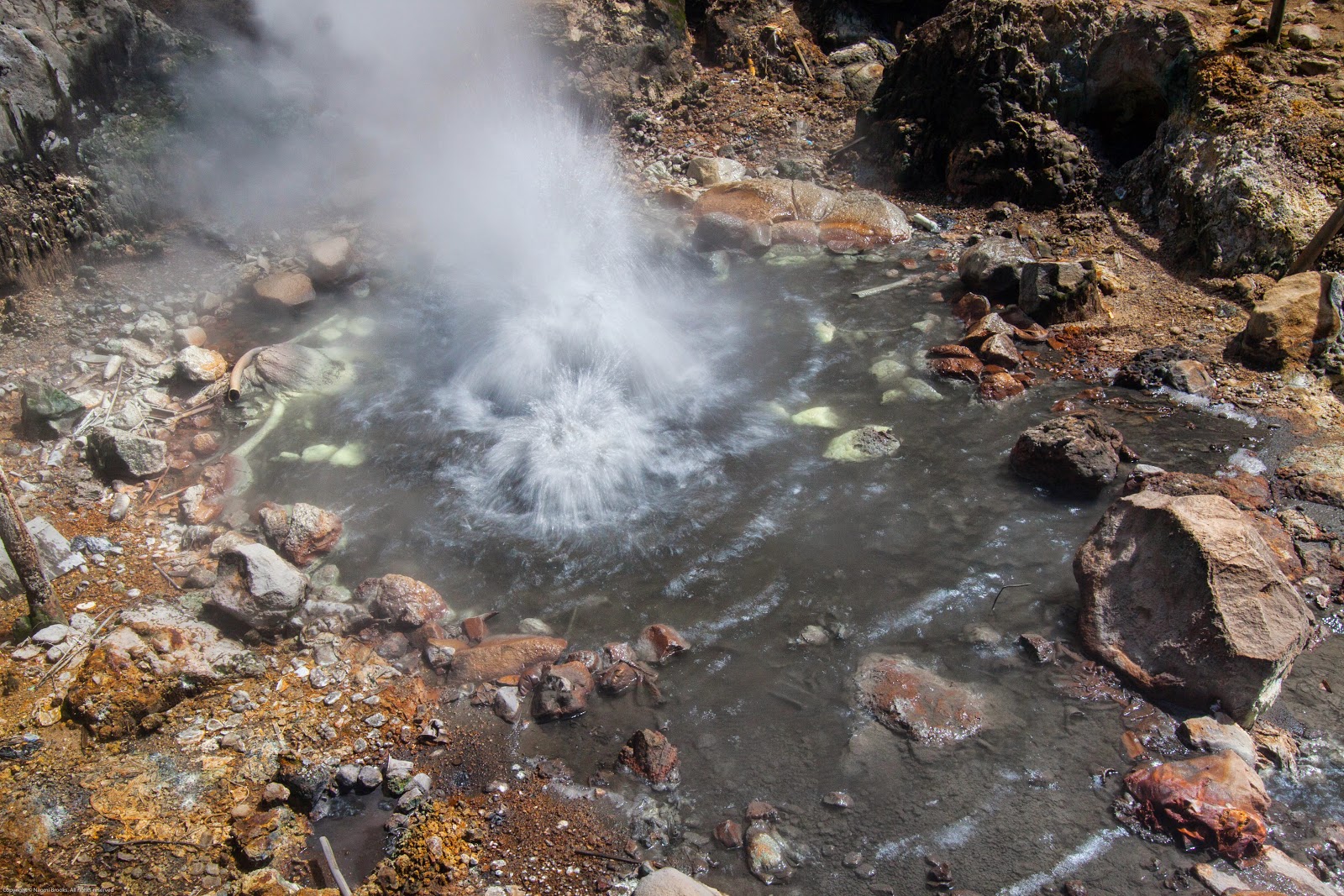 The Israeli chap had said Candradimuka was more interesting than Sikidang, and I think I'd agree. It's a bubbling hot pool, with noisy geysers as well. Unfortunately the video I took didn't record sound - from now on I'll use a different video app that does...


I had a few other technical hitches at Candradimuka. First I lost one of my tripod leg caps in the hot pool mud, and then my variable ND filter got stuck and won't unscrew from my lens. Which isn't a problem in harsh daylight, but is for interiors. I'm not quite sure how I'm going to get it off... 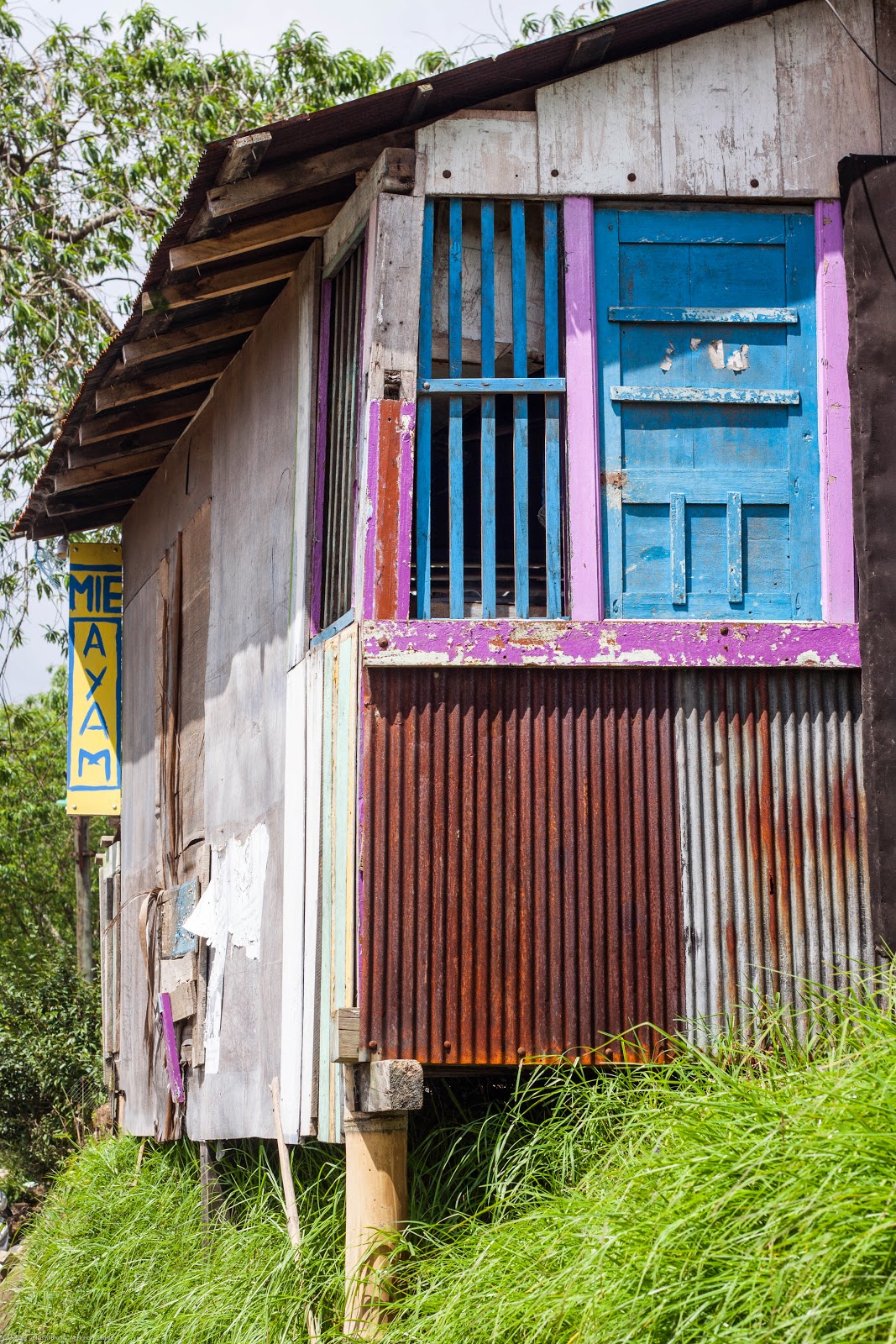 The walk back was really pretty, but towards the end I was covering old ground, and it was uphill, and I was tired. A lovely bowl of hot chicken noodle soup did the trick and I continued back to the homestay, where I rewarded myself with a cold beer.