2 weeks in the east

After my trip to NZ I planned to spend a couple of weeks over in the east of Australia catching up with family and friends. In the past, with the pressures of getting home to start work, or just the sheer annoyance of having to stopover and schlepp around all my ski gear, I usually just flew straight home. But now I'm retired I can take things a bit slower and easier.

I'd managed to find some good flights ( Christchurch to Sydney for $250, and Sydney to Perth for $185) by keeping an eye on the specials. Yes it can be cheaper to not fly straight through, but you've got to be flexible, and there's a good 18 days between those 2 flights. The domestic flight was originally much cheaper, but I needed to add 35 kg of baggage, plus I purchased the Qantas points for $20, as it was with Jetstar. They aren't my favourite airline, but at that price I was willing to suck it up.

I'd prebooked my car hire at a reasonable rate of $25 a day, and again took advantage of my corporate travel insurance which covers me for interstate domestic travel as well as for international trips up to six months duration. But first I had to get my luggage and self to the car hire pickup bay at the airport. I smilingly squeezed past the aggro stares of fellow passengers queuing for the park and pay buses and found my bay right up the end. I'd forgotten that smiling is a criminal offence in Sydney...

Just as my minibus drove up, a strapping young man, presumably an airport employee passing by, turned up out of nowhere and helped me load my heavy ski bag into the back of the van. I thanked him and went to load my other bag, by which time he'd promptly disappeared. My faith in humanity restored!!

At the car hire place I signed the forms and handed over my credit card, and then we had fun loading a 1.7m long ski bag into a Hyundai i20! Through the gap between the driver and passenger seat seemed the safest option, and then it was off through the night time streets of Sydney to Wollongong. Not much has changed, I've driven that road so many times over the years it came as second nature.

In Wollongong I stayed at my friend Mary's house. I met Mary in my first year as a doctor, and we became firm friends after she sold me her old windsurfer and threw in some lessons as well. We'd lost touch over the years as she'd moved away and had a very controlling (ex) husband who isolated her from her friends and family. Now she's a single mum with just one more child to finish school and getting on with her life. It was so good to catch up with her and it didn't feel like it had been 20 years since we'd last seen each other. 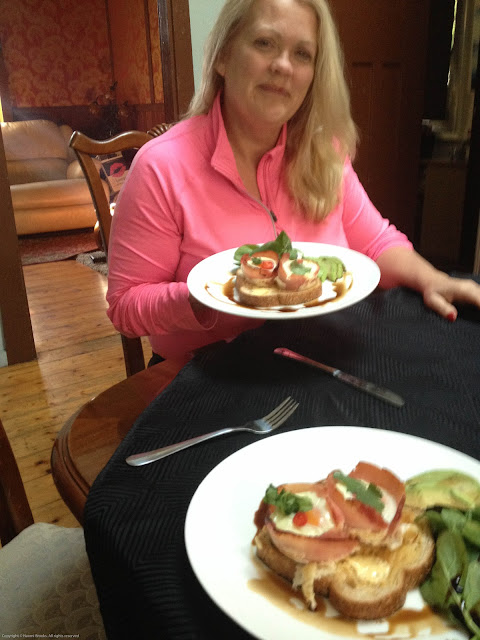 After a day in Wollongong I drove down to Canberra to visit family. Originally I had planned to spend a few days there catching up with mum and teaching her how to use the iPad I'd bought her for her birthday a year ago. But whilst I was in New Zealand she had become critically ill, and before I had a chance to jump on a plane she'd gone from almost dead to rapid recovery. So I'd put off returning immediately, and stuck to my original plan, allowing my brother to take a holiday with his young family and for my older sister and I to do shifts at the hospital with mum whilst she slowly recuperated.

Needless to say, I stayed a lot longer than originally planned, but I did manage to achieve my main objective, which was to teach mum how to use her iPad. There is nothing quite like being bed bound to wear down the resistance of an octogenarian to embracing new technology!! She got to read all the blog posts she'd missed out on whilst being seriously ill, and had a good chuckle at Lambie and Rammy's Grand Adventure. She even got to meet Lambie! 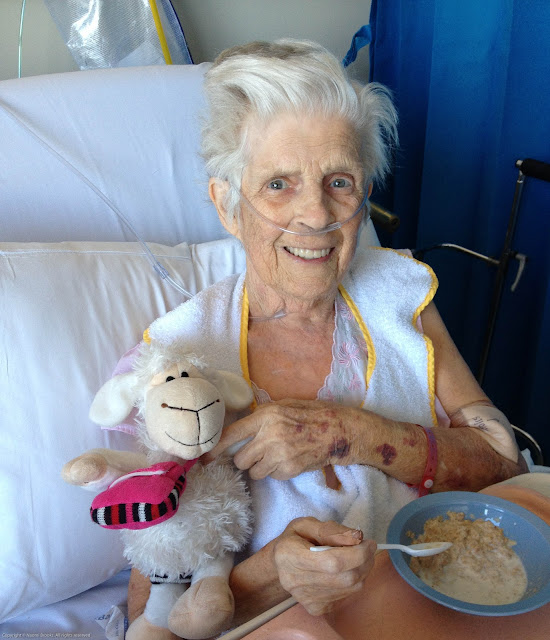 It was also awesome to attend a school reunion. Only a small group of us met up at the old "Boot and Flogger", now renamed and refurbished, our old drinking haunt back in the day. So nice to reconnect and reminisce. Some of the stories.... 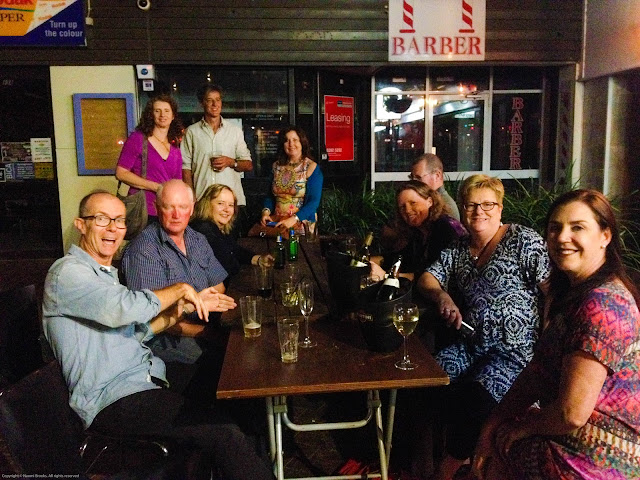 Having all the family around supporting mum was great. We rarely get to see each other as we are all geographically dispersed, so it was a real treat to spend time with siblings as well as mum. Inputting mum's address book onto the iPad became a grand discussion about all the people in there and who was still around. Lots of crossed out names as mum's friends fall off the perch...

After 10 days with mum it was time to head back to Wollongong, as I had an appointment with my accountant in Sydney. It's been over 10 years since I've visited Peter and Maureen in person as we usually do my tax over the internet. I got some good news and some slightly bad news, discovering I'd made a capital gain on the albatross sale (more tax to pay), but my capital gains tax bill on selling my Sydney property will be a lot less than I was expecting. So, overall, damn fine news indeed!

Then that evening back in the 'gong Mary arranged a surprise dinner for me with 2 other of my Wollongong friends. So good to catch up with Kath and Neen after all, as I'd thought my prolonged trip to Canberra had left me no time to see them. 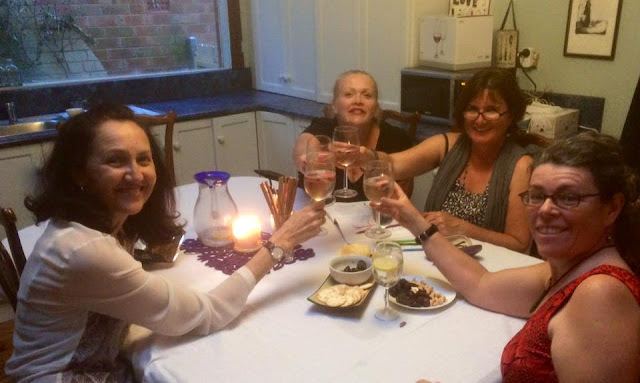 Then I flew back to Perth, had a couple of days with my awesome little friends in Scarborough then drove home to Geraldton.

It was a wonderful 18 days. Seeing family and reconnecting with old friends and schoolmates, spending some really quality time with mum, and a bonus good piece of news from my accountant.

The garden looks great, nurtured by my wonderful house sitters Jill and Perry, so it's back to eating organic food from the patch. 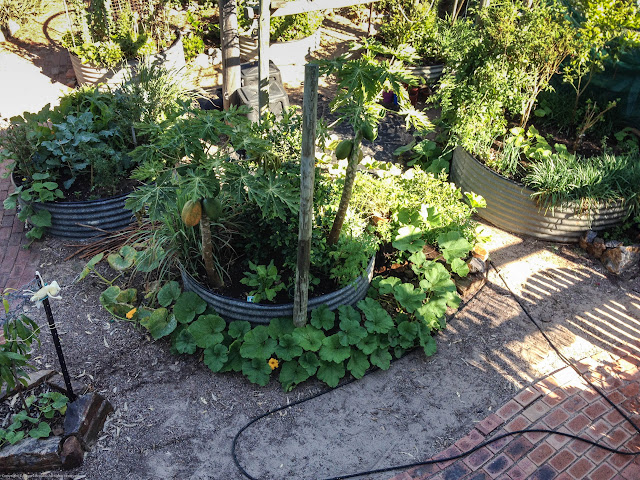 Lambie, who was introduced to you all some time ago, arrived in Canberra. There she met a handsome young sheep called Rammy. Rammy comes from New Zealand too, but lives with his friend Liddy in Canberra. 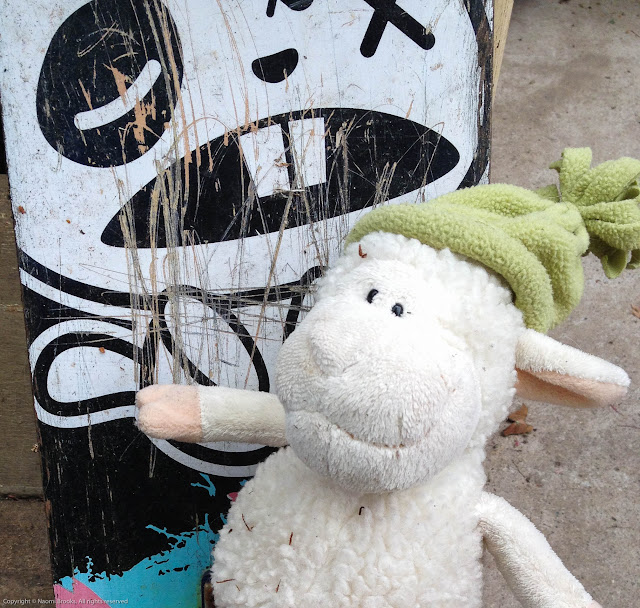 Lambie and Rammy hit it off straight away, and could be seen smooching on the couch while everyone else was jumping on the trampoline. 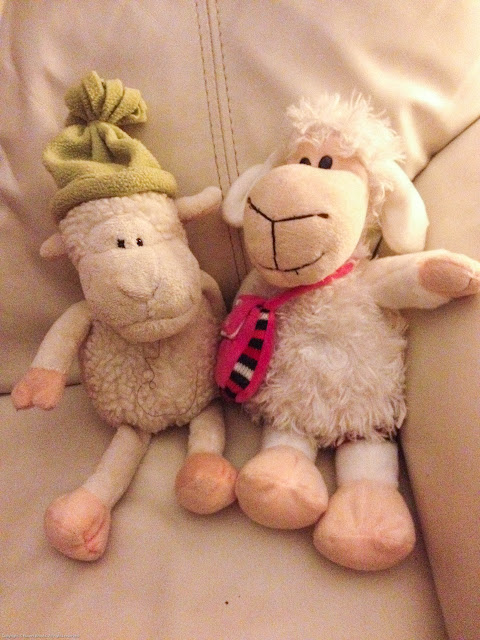 Then one day they went on a GRAND ADVENTURE!

They drove to a big forest and climbed an enormous tree together. 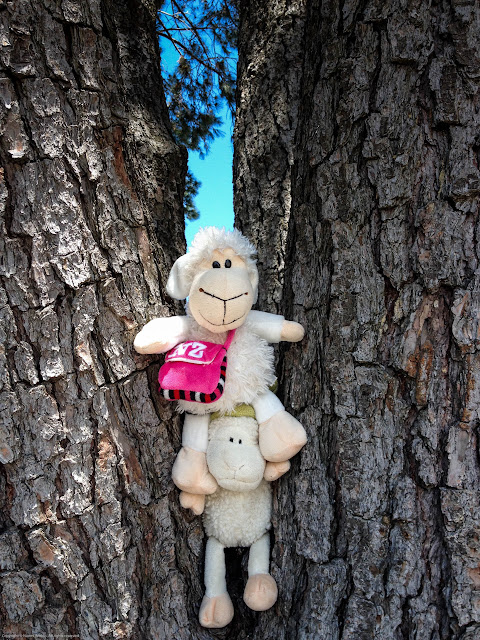 They watched Liddy and Bella's kites flying in the sky. 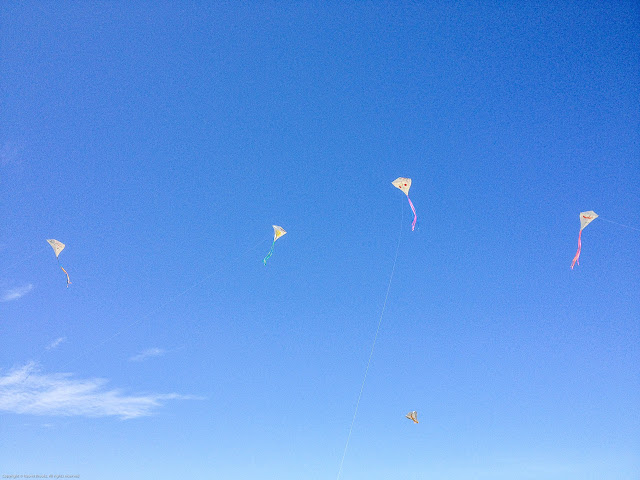 Suddenly, a big eagle stole them away and put them in her nest!! 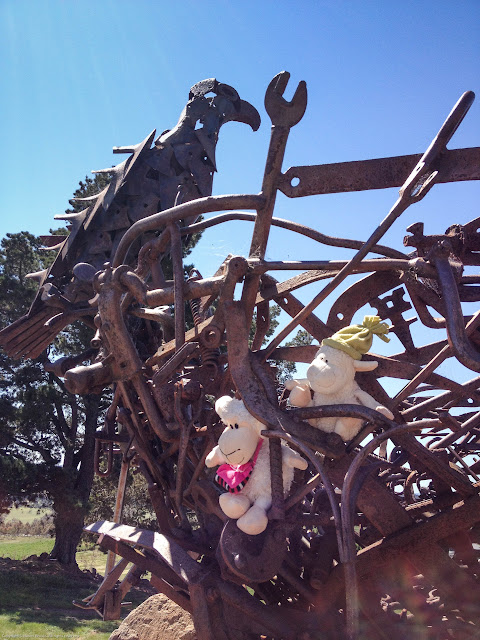 But Rammie climbed out and called to the girls, and they rescued them. Phew!! 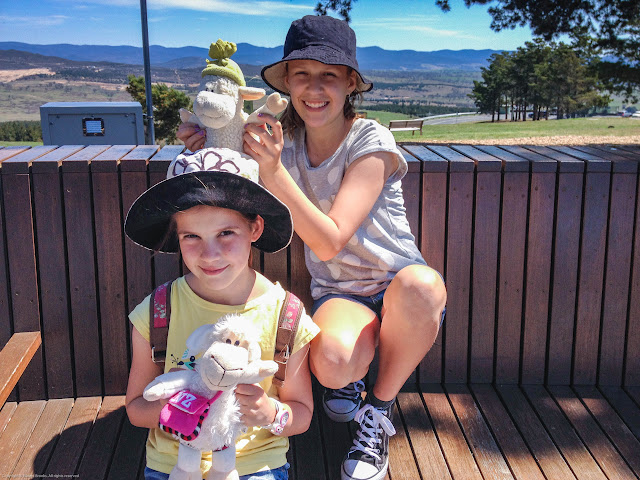 The eagle was really angry!! He stole the lambs again and put them in a cage so they wouldn't escape a second time. The girls had gone off to eat ice-cream, so the lambs had to find their own way out. 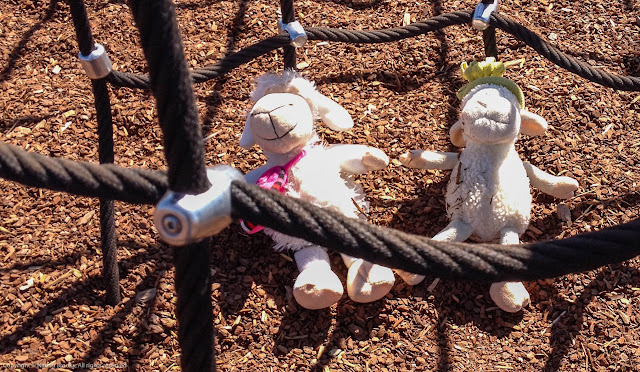 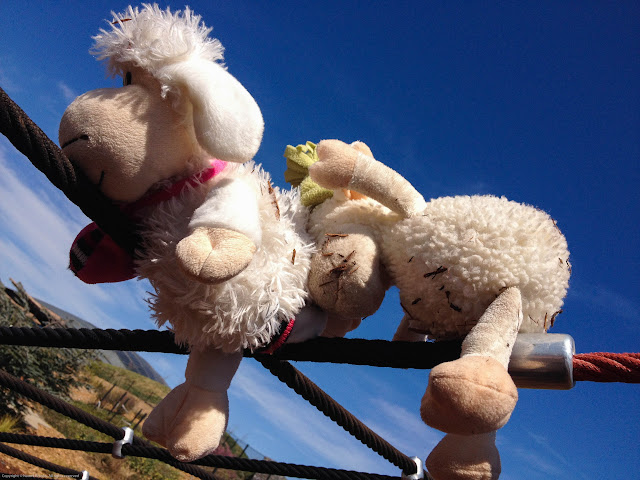 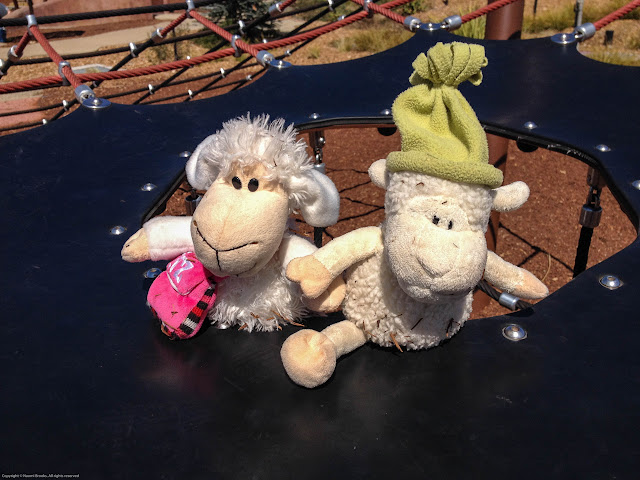 swing over some big wires.... 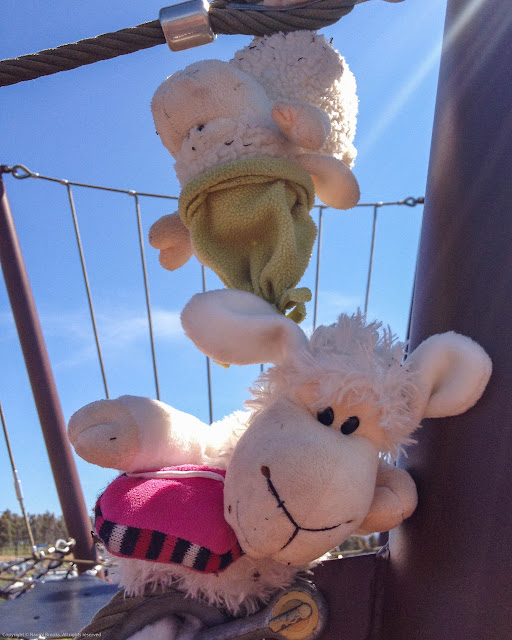 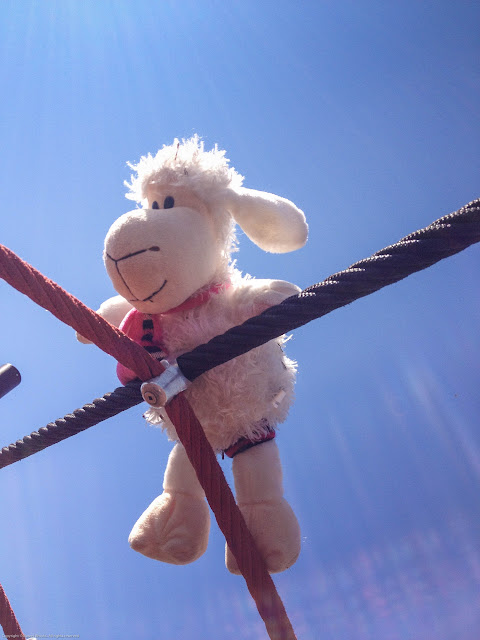 slide down a gangway.... 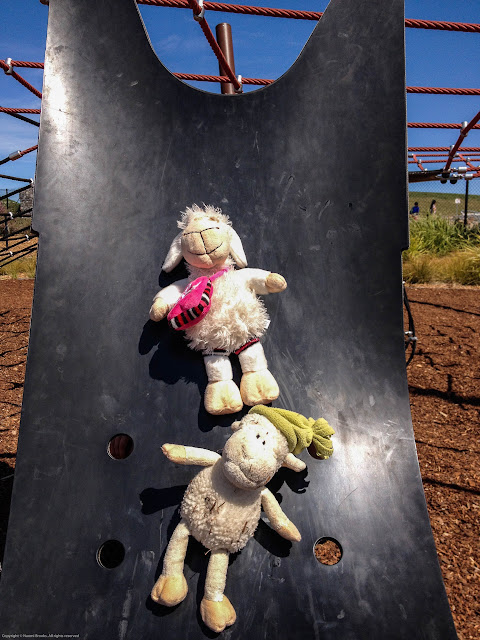 slip through some pipes.... 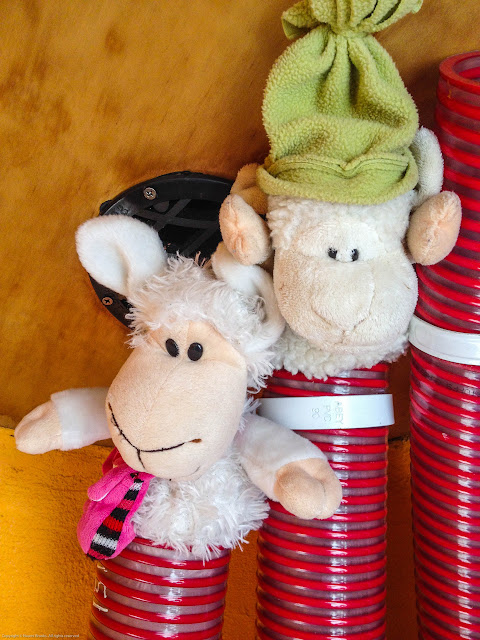 ooh those lambies are a little chubby, so it was quite a squeeze!! 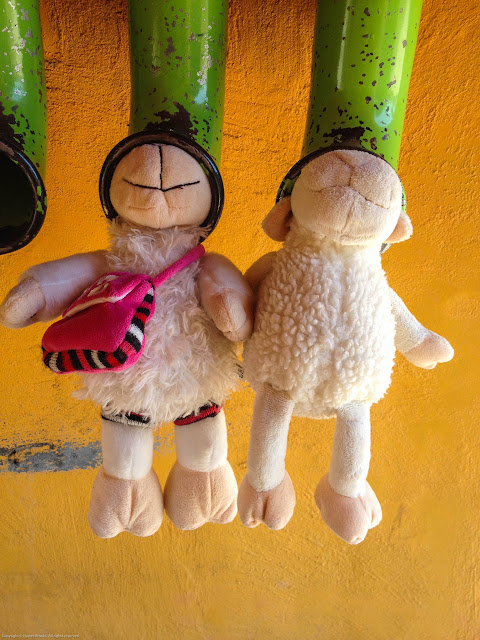 Finally, they rode on an elephant..... 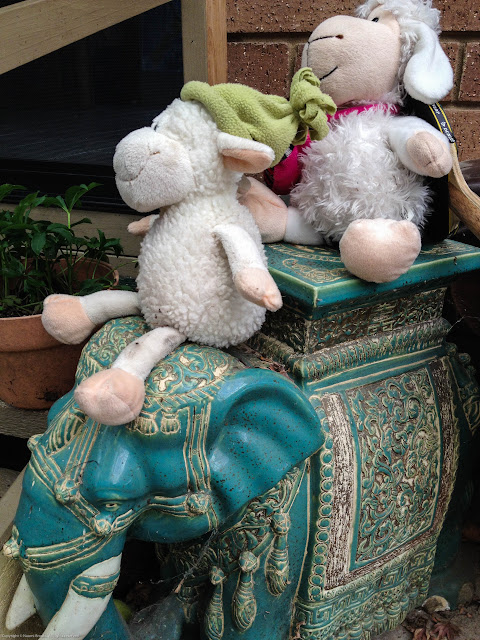 to a nice safe place where the eagle couldn't get them. 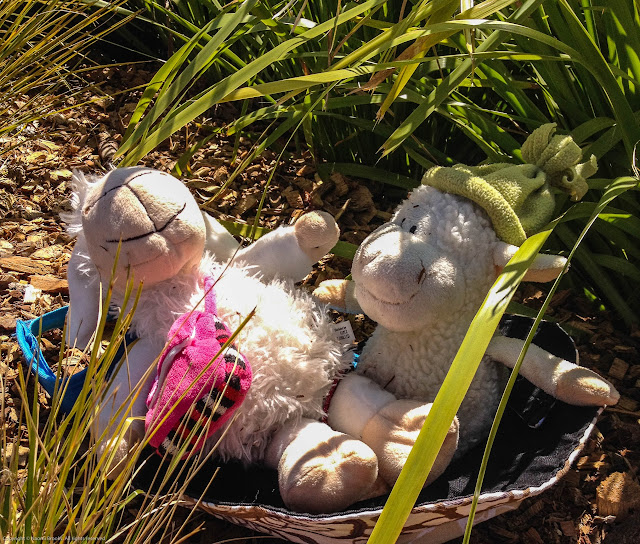 Lambie is so proud of Rammy for looking after her. He's one cool guy!! 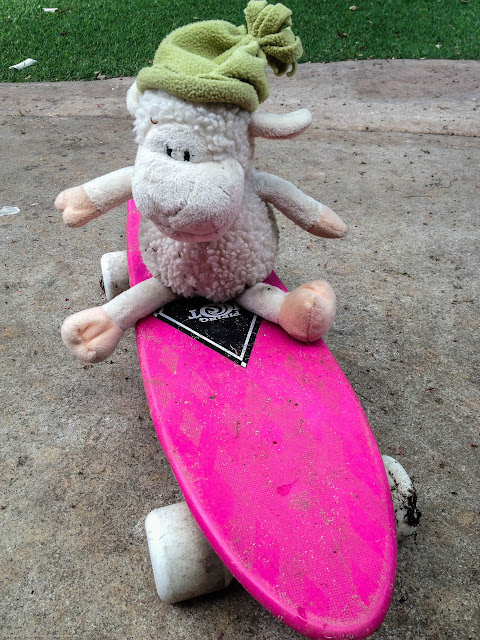 This tale is brought to you today with lots of help from Liddy Brooks, Rammy's mum
No comments: