I may have missed Xmas but I got three New Years instead!

Bus travel in Laos is an event in itself. The roads are appalling and the buses, packed solid with people and goods, are falling apart, literally. It's a great way to travel if you have time, patience and a great sense of humour. If not, I'd suggest flying! 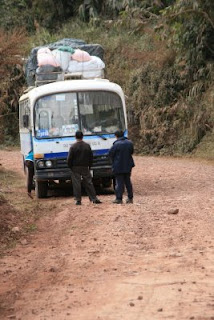 The bus trip from Udomxai to Phongsaly takes 10 hours with a few stops enroute, including a lovely market town with beautifully dressed Akha women everywhere. I was in my element! Frankie, a Melbourne lass with a fun loving attitude, joined the bus there, so we decided to join forces and find some trekking together. After an exhausting trip on dusty roads we had dinner and crashed. So much for celebrating Xmas. 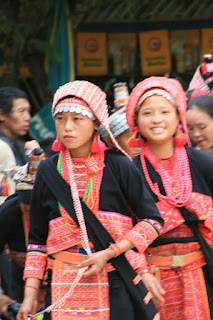 Phongsaly is a gorgeous town amongst mist covered peaks not all that far from the Chinese border. It has few tourists, a photogenic old town with cobbled streets, and yes the trekking prices were much more reasonable, with about 50% going to the villages. We opted for a 3 day trek that would take us close to the china border and would stay in 2 different ethnic group villages overnight. Well sometimes the best laid plans..... 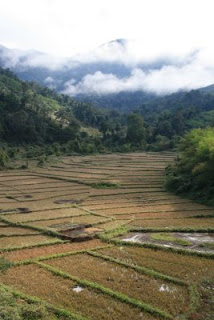 For photos of the trip to Phongsaly.

A three hour bus ride south to Boun Tai saw us meeting our guide at 11 am to be told we'd missed the truck out to the village where we were to start our trek. Aside from chartering a truck for a phenomenal price, we could alter our plans, take a later truck and go and visit a Hmong village instead who were celebrating New Year. This would add an extra day to our trek. What a no brainer! Off to visit the Hmong we went. 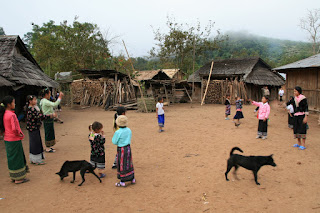 In Phongsaly Province Hmong New Year is celebrated some time in December and is held on different days in different villages. It involves much chanting and incantations to send away the bad spirits and illness within the village, accompanied by the blood of a chicken or two and the firing of guns. Then everyone cooks up the chickens and the feasting begins. But not before downing two glasses of Lao-Lao, the ubiquitous rice whisky! Locally made of course! Oh no, not again!!! 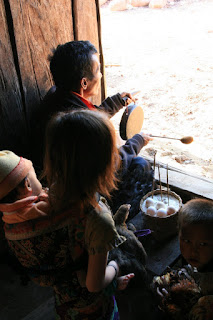 The feasting continues for hours, with invitations to visit many households, drink Lao-Lao and eat. By the fourth place there just wasn't any room left in our tummies, and after the fifth place we managed to retire to bed. But at 3 am the guns were let off again - just to make sure those pesky bad spirits really left town - and soon after the locals were up and about and getting ready for the new day. The children were all dressed in new clothes, many beautifully stitched, looking absolutely gorgeous. 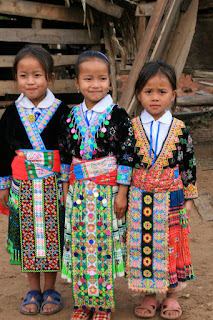 After at least 2 breakfasts and some more Lao-Lao, we left the village loaded with New Year rice cakes, generously given to us by five or six households. What a wonderful extra day we'd had, and now we were off to complete the original schedule. But first we detoured to a second Hmong village for our third breakfast and more Lao-Lao, and watched the young girls and boys throwing balls between them. It's apparently part of a courtship ritual, if they keep dropping the ball then there isn't the right chemistry between them, but if they are in harmony with the ball, then they will be in life! Can't imagine western teenagers doing something like that! 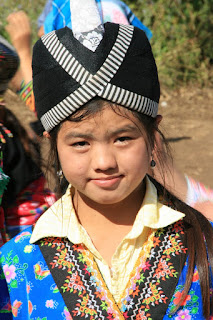 About one o'clock we arrived at an Akha village as they were slaughtering a buffalo. They were very eager for us to take photos as they too were celebrating New Year. Then over lunch we were invited to stay the night and join in the celebrations. How could we refuse? We were now up to a five day trek but what an opportunity not to be missed. 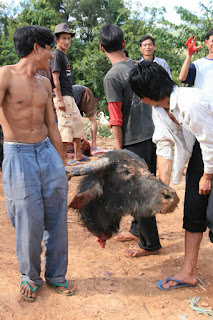 The Akha live on mountain ridges in houses with dirt floors. They have pigs and chickens but no gardens around their houses, growing all their produce at their farms. It's a stark landscape around the houses and it would be hell getting around in the wet season, but the people are unbelievably friendly and welcoming. My bubbles again came in handy for breaking the ice with the kids and soon Frankie's clown antics had the whole village following her like the pied piper! 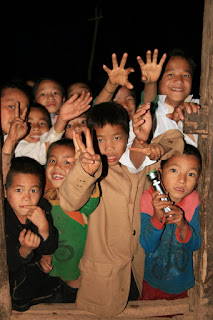 The evening celebrations began with more Lao-Lao, the Akha preferring 2-4 glasses before you can start on the sticky rice! The food for dinner was challenging, with raw buffalo meat and a blood jelly dish as mainstays. Thank goodness for sticky rice! 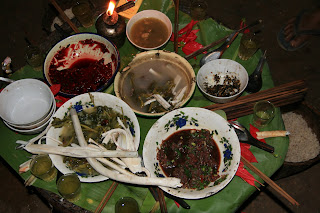 After our second dinner and obligatory Lao-Lao we joined the youngsters in the schoolyard for dancing. These teenagers also indulge in copious amounts of Lao-Lao and young boys can be seen smoking cigarettes. When the music starts its the girls who get up and go and choose a boy to dance with. Although the music was modern, the dance style was comically conservative. Us two foreigners showed 'em a move or two and soon everyone was dancing the new updated style. The commotion when we left was quite moving, they'd never had foreigners celebrate New Year with them and were keen for us to dance the night away with them. But a long day of trekking beckoned, and sleep ins in these villages just don't exist.

Up with the crowing roosters and snorting pigs, we joined the entire village outside the headman's house to usher in the New Year with offerings to the gods to ensure safety in the fields. This involved tying string around the tractor and the young man sitting on it. Then we were treated to an edible breakfast and headed off into the countryside. But not before I'd solved the riddle of just where all the human waste went. There are no latrines in the village so it's a case of sliding down the hill into the forest for a quiet squat. But there's no evidence of where all the villagers go, and the pigs following me to my private retreat explained it all. It helps to take a stick with you, just to keep them at bay until you've done your business, and then it's hoovered up!! Hmmm, not sure I'm eating Akha pork again! 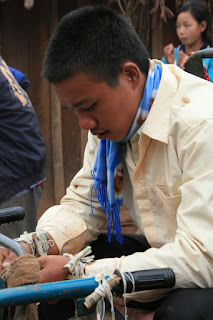 Our third day saw us walking along a road and then through paddy fields to a rather disappointing hot springs. But the forest was pretty and it was nice to have a wash in a less public place than the middle of an Akha village. Our stop that night was in a Yang village, in a lovely stilt house overlooking the river and even had the use of a latrine. Luxury! The villagers weren't nearly as friendly as our Akha guests, however we did get a good nights' sleep. 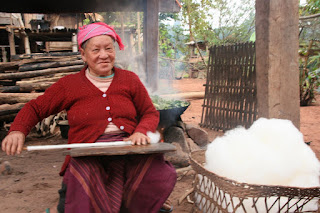 Day four saw us walking through a protected area which still had primary forest. At our lunch spot beside the river, which we crossed somewhere between 20 and 30 times in one day, we encountered an Akha wedding party returning to the husband's village. We joined the procession with this very shy young girl and watched her dress ready for her arrival in the village. All the women were there to check her out and welcome her, quite the spectacle. Then we passed another bridal party going the other way!

Later we were accompanied to the Laobith village, our homestay for the night, by the year 5 schoolkids who have to walk an hour and a half each way each day as their village doesn't have a teacher to teach them. The Laobith are one of the smallest minority groups in Laos, and this village was completely isolated, without road access to allow people to reach markets and sell goods. But they too were wonderfully friendly, and soon yours truly had the whole village in stitches teaching the young kids how to dance the "Hokey-Pokey"!

Our final day saw us walking through newly planted rubber plantations and oceans of sugarcane, past a couple of Akha villages, to the border with China. Here, scores of trucks carrying sugarcane were crossing into China for processing. Without factories, Laos misses out on value added income from processing their cane; more money for China!

A sawngtheuw and bus ride back to Phongsaly saw us arrive back in time to celebrate the actual New Year with a few other foreigners. Not that we made it to midnight!

Rest of the photos here.