After over 20 years of windsurfing, the last 15 almost exclusively in waves I had my first ever full on collision. It was, of course an accident. Continuously on wave breaks you cross paths going in and out, but generally wave rules prevail and the person coming in gives way to the person going out through the break.

Unfortunately I struck a newbie, a very nice chap from New Zealand, visiting for a few days on hire gear, who was having his first experience of wave sailing and was pretty terrified of the whitewater coming at him when he had to contend with me coming in as well. A game of "chicken" ensued where I turned to get out of his way, he turned the same way, down wind, up wind about 3 times before I made a big down wind turn at exactly the same time as he did and WALLOP!! I got hit at velocity by his board and kit. I had about half a second to realise I was about to be history and then something very hard and painful whammed into my right side and I was in the water, trapped under the gear trying to find my way back to the surface.

Luckily I've been in enough sucked down situations before so I didn't panic, made it to the surface and was immediately grabbed and held up by my very upset attacker. I was in alot of pain, from my right arm, and am eternally grateful that Mike only thought of me and completely abandoned his kit to keep me afloat and get me back to my board and kit where we could assess the damage. My arm had swollen up immediately, with a huge golf ball like swelling just below the elbow, and although I was in alot of pain it appeared I could move and grip things. But I couldn't sail back in, so Kate came to the rescue and sailed my kit in with me holding on at the back and being body dragged. Others rescued Kate and Mike's kit, and when I got to shore others again helped with ice, Panadol and derigging my kit. It's a great community of windsurfers and kiters we have here, I am really grateful to them all.

After lying down in Kate's camper for an hour or so, the Panadol and ice seemed to have worked their magic and I drove slowly home to Drummonds (yeah I know I probably shouldn't have done that) and then got Rhonda next door to drive me in to the hospital for an Xray. And somehow, I managed not to break anything. 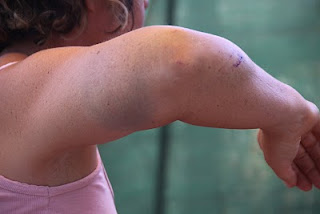 I've also a huge bruise and swelling on my right thigh, but aside from being unable to straighten my arm or lift anything, I'm fine. Poor Mike, who was absolutely horrified about hitting me, has a bingled board and a broken boom. I lent him my old spare boom and insisted he keep sailing, and they popped in later to return it and see how I was. That was when I learnt that he and his mate were complete newbies, but hopefully now they know the wave rules they'll know that the person coming in gives way, so they don't have to as well. That way collisions can be avoided!!