It started about three weeks ago when I decided to have another go at making sourdough. For those who don't know, sourdough is made by creating a starter from flour and water that ferments from natural yeasts in the flour and you feed it every day, a bit like a tomaguchi (remember them?). After a week or so, the starter is fermenting nicely, and doubles in size within 24 hours of feeding, smells like overripe fruit and is full of bubbles. Then it's ready.

Next step is to combine your starter with more flour and water, and a little salt, then allow it to prove through some gentle stretching, folding, shaping and resting, over the next 5-6 hours. Then in what is turning out to be the hardest part, you transfer the gluggy mess onto a pre heated ceramic tile in your oven, having quickly slashed the top to allow the bread to "spring" and sprayed the oven to get steam happening. And then you wait for the magic to happen. 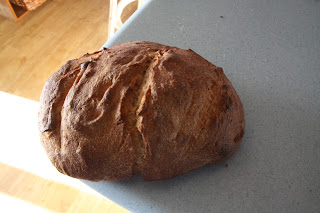 So far, I've made one loaf that I'm proud of. It looked both good on the outside, and the crumb was light and edible. The rest? Well flat and dense might be the most apt description, but some were still edible, usually after toasting first. Ho hum, practise makes perfect.

In the middle of my sourdough epiphany, I also signed up for the Oxfam Gather to Grow Campaign. This involved hosting a meal for friends, who were asked to donate what they would normally pay for a nice meal out. The money will go to the East Africa Food Crisis, which the federal government has agreed to match, dollar for dollar, any donations to registered charities like Oxfam. I had sixteen takers, of which 3 were kids and 3 were coeliacs. So the meal needed to be gluten free.

I decided that I wasn't yet ready to tackle gluten free sourdough, but the main course was easy. After my success with roast lamb for a crowd in NZ, I ordered up a couple of large baby baa legs from the local butcher, and proceeded to slow cook them over 4 hours in oven bags, using a combination of my oven, the kettle barbie, and the gas barbie. This provided me with more temperature options and more space, as I also had alot of veges to roast as well. And the whole meal was ready by the time the final straggling guest arrived at 7:30.

I'd set up tables on the verandah, having some friends do a mad dash, musical cars type escapade to get a large tabletop delivered and tables set, whilst kind of watching the semifinal between the Wallabies and All Blacks. I've been in NZ when the ABs lose a big game, and with the recent oil spill disaster, the Christchurch earthquake, and a really shaky economy, I was actually pretty happy that New Zealand won. That country really could not cope with another catastrophe. Seriously, losing the World Cup for NZ will be like 5 Christchurch earthquakes all at once. Then again, I may be underexaggerating...

The lamb, if I say so myself, was delicious. It fell off the bone, and melted in your mouth. And the veg were just right. Yep, the compliments were flying. And then came dessert....

I make a really good tira misu. Seriously. I've never had tira misu in a restaurant anywhere that's as good as mine. I use genuine ingredients: mascarpone, sponge finger biscuits, strong espresso coffee, Kahlua, and not too much sugar. And people loved it - the non coeliacs that is! But TM wasn't enough, and I still had to please the gluten free crowd, so I made a mulberry tart, using gluten free pastry mix and home grown mulberries, topped with double cream, which apparently was yummy too.

Inspired by a bad dessert experience in NZ, and a cooking show on Friday night, I'd just found a wicked recipe for sticky date pudding. So I decided to cook it, double the recipe quantity, which involved getting the ingredients all ready pre dinner and baking it on the fly whilst we were all hoeing into the lamb. Sticky date pudding is OK warm, but it's awesome hot, straight out of the oven. Somehow I got the timing spot on, and well, the silence was deafening. In between the oohs, the aahs and the scraping back of chairs in the mad dash for second helpings that is. With all that butter, cream and sugar, you bet it was awesome! 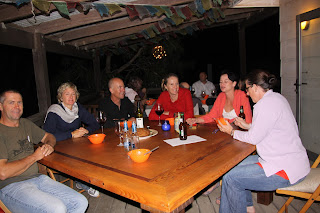 By the end of the night my wonderful friends had helped me raise a grand total of $750. Kate apologised profusely for all those snide putdowns she's been making for at least 3 years regarding the infamous post windsurfing session roast dinner disaster, and others were overheard using nice words that included lots of superlatives. If my Fiji friends had been there I'm sure there would have been some "best evah!"s.

I have to do this again. A great dinner with friends, and we raise money for a cause. Everybody wins. And I get to eat leftover stickydate pudding all week....