Finishing the renovation at last


I returned home from my trip east to find that the floors had been laid, the blinds had been installed, the plumbing all connected up, and the electrics almost finished. And the splash backs were in. 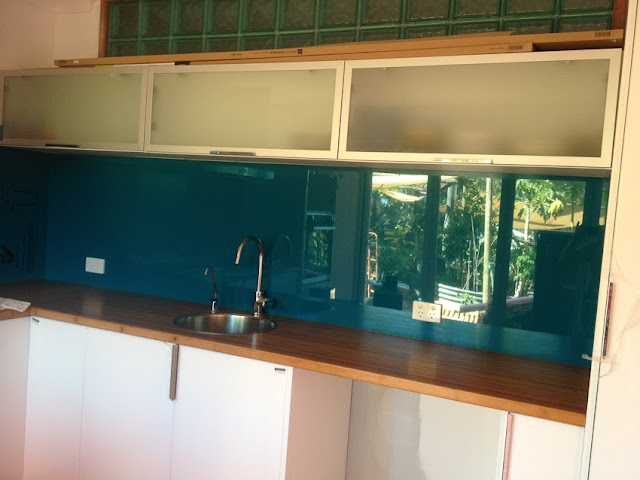 The splash backs are awesome. This product is called Laminex Metalline, and is a resin coated sheet of aluminium, so can be used behind cooktops. Costs half the price of glass, and looks a million bucks! 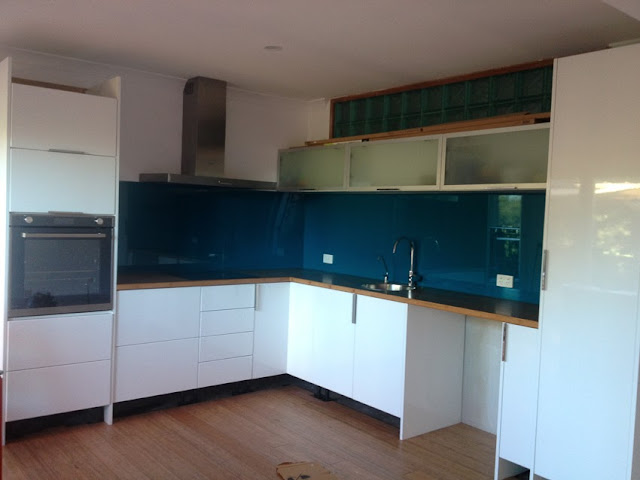 Being away for two weeks meant a few things happened that might have been avoided if I'd been there. Like the plumbers smashing tiles to get the toilet in, creating a huge hole in the gyprock sheeting that we needed to patch and retile. My tiler had no trouble sliding a new tile in behind the toilet bowl, so we still don't know why the plumber had a problem. 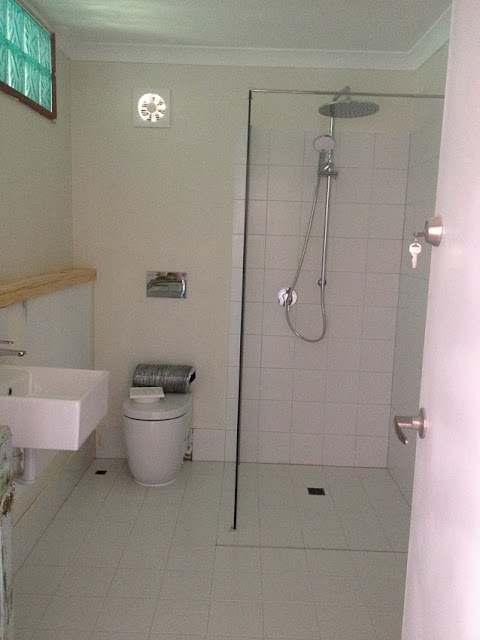 The flooring looked great, aside from the appallingly bad job done in cladding the trapdoor. The level was wrong, the cuts weren't square, and they hadn't left a loose board for the trapdoor to be opened. I wasn't happy, particularly when I discovered that the flooring contractor had a cut hand so he had brought his wife along to do the job for him! And then finally, the door trims were so high none of the doors could close without having their bottoms shimmed. I was one very unhappy camper! 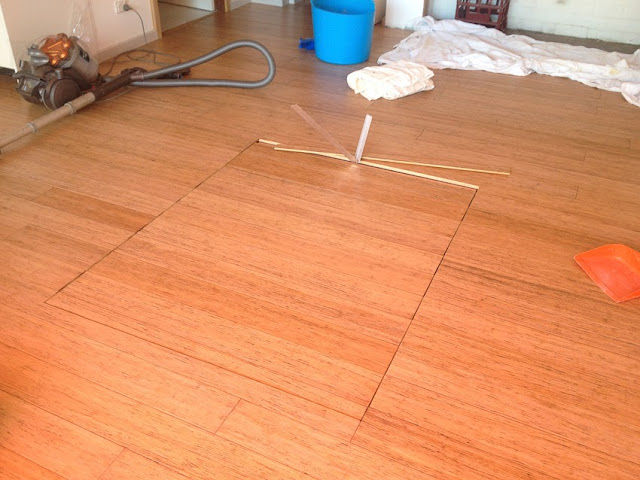 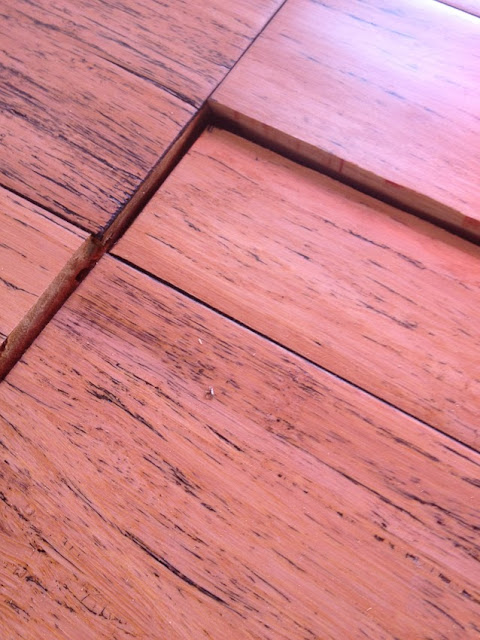 Thankfully, they rectified the problems. The trims were replaced, and someone else came out to recut and replace the flooring for the trapdoor. The final result looks considerably better. 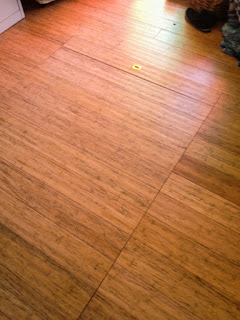 Meanwhile the rest of the electrical appliances were fitted, and I began adding final touches like rails for utensils, knife racks, towel rails and hooks, and a hanging rail for my clothes. With limited space the bathroom doubles as a walk in wardrobe, something I'm happy to do as the extraction fan is a heavy duty one which gets rid of the steam very quickly. 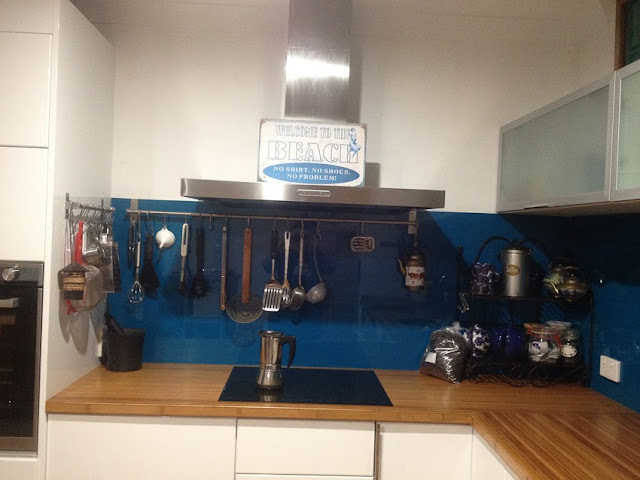 The final big job was making and assembling the Murphy wall bed. These beds are common in North America and Europe, but not that well known here. My options were to purchase a beautifully engineered Italian bed costing something north of $8K or buying a DIY kit from the US for around $500 and making it myself from construction ply. Admittedly, outsourcing it to the chippy!

Scott had handed this job over to another chippy, a Tassie chap called Mick, as he had too much work on himself. Mick got into a panic at first that the job was too hard, but once he read through the instructions, took the plywood back to the cabinet makers to get it cut to the correct sizes and began following the easy to understand instructions, he had the thing made pretty quickly. I lucked out because Scott's building supplier had received marine ply instead of construction ply sent up from Perth, so I got the much nicer, much more expensive wood for the price of the lesser. But getting the bed into the alcove created for it, well that was a nightmare! Mick and I spent a while working out how to do it, in the end extending the flooring and then shortening the bed cabinet sides to fit. And wrestling the struts on was a real mission. 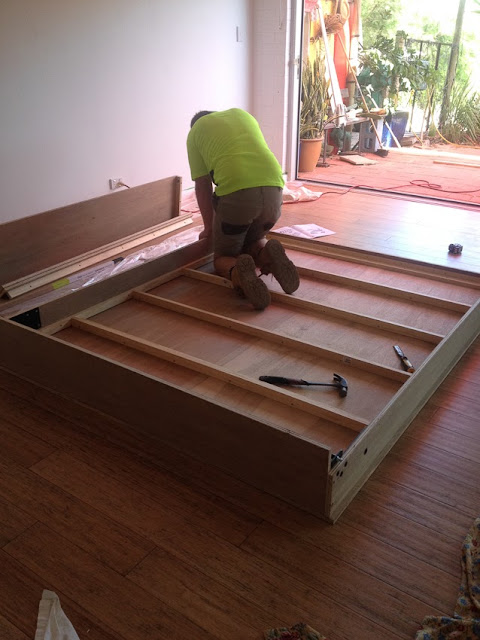 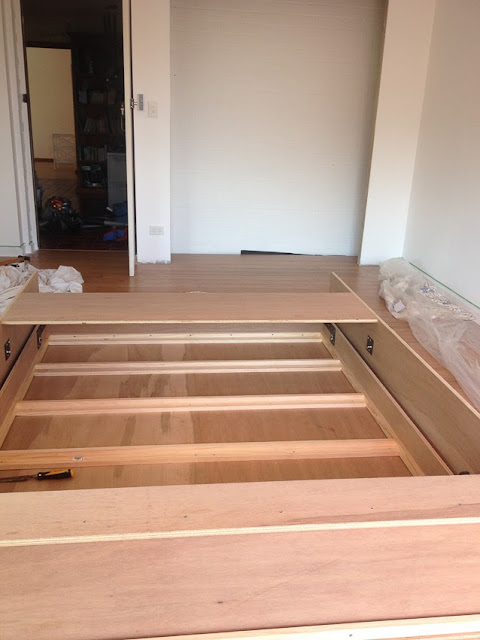 But it doesn't half look nice! 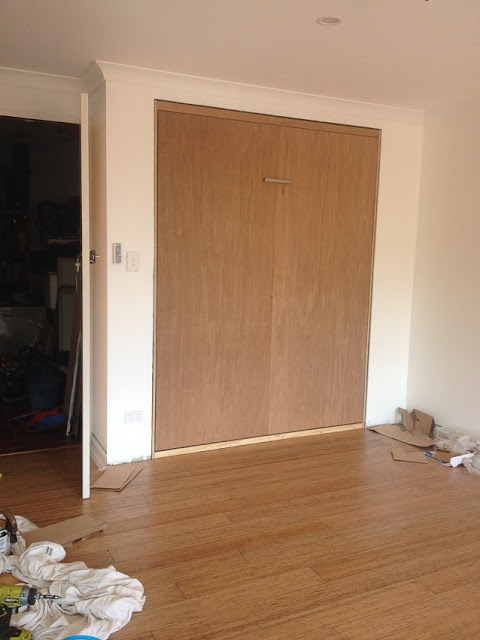 Scott then finished off the plaster sides, I repainted, the floor kick board was attached and I spent a couple of days sanding and varnishing the bed. I went for a water based varnish because it didn't have a whole lot of poisonous hydrocarbons in it. Not too keen on inhaling those fumes each night... 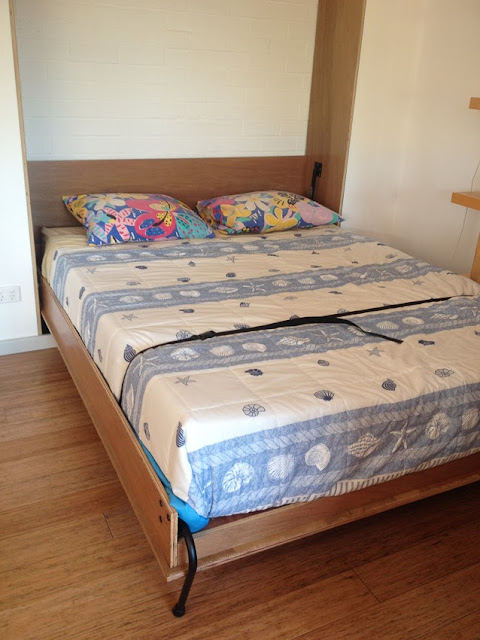