Exploring Fiordland by foot and packraft

After my epic four day adventure I headed back to Wanaka for a few days to catch up with friends and plan some more trips. But first I popped in to see Andy (Arno's business partner) and purchased myself a drysuit. That's another 1.2kg to add to the weight, worth it if a trip involves a lot of paddling.

I took the packraft out onto Lake Wanaka and practised self rescue (pulling myself back in to the raft after deliberately self capsizing) a few times. It gave me a chance to test the integrity of the drysuit, and I stayed happily warm despite dunking myself numerous times in an alpine lake on an overcast, slightly windy day....

Then I saw a notice on a Facebook page that I follow looking for volunteers to do some track cutting and trap setting at Doubtful Sound over Easter, so I put my hand up for that adventure and headed back down to Te Anau to do some further exploring in Fiordland.

First I went on a paddle down the Eglinton River. This is the river valley that tourists drive along on their way from Te Anau to Milford Sound. There are a few lakes and pools by the road to stop at, but the river itself isn't on the tourist radar, yet there's a nice little gorge to paddle through.

I drove my car to the put in spot: a nondescript DOC campsite just off the road. There I inflated the raft, donned my drysuit and walked down to the river. Then it was an easy float through some braided river sections until the gorge itself. 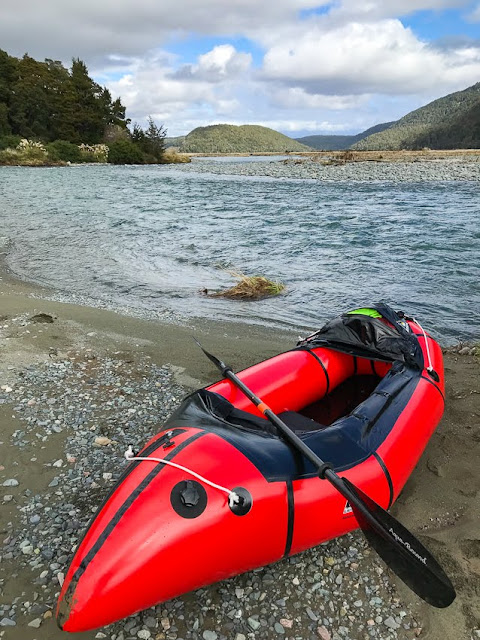 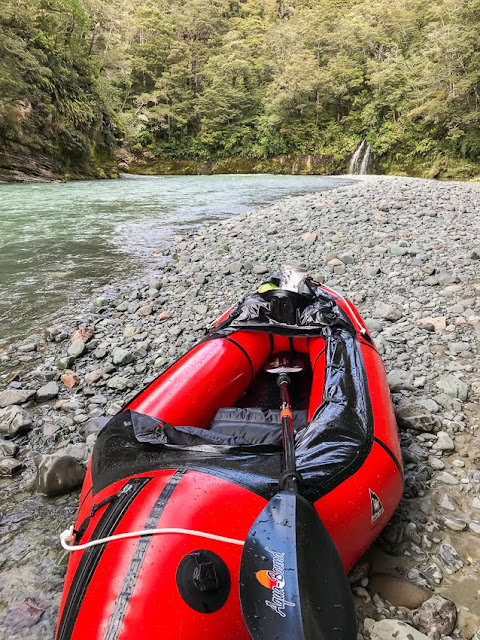 The gorge is less than a kilometre long, and aside from one cheeky class 2 rapid right at the start of the gorge, it's a lovely glide between fern encrusted walls before emerging back into cattle country. I only took a few photos, and one video. I'm yet to get a waterproofed camera....

After a few more kilometres of braided river I arrived at the pullout point, packed up the gear and walked the short distance back to the road to hitch back to my car. Job done! 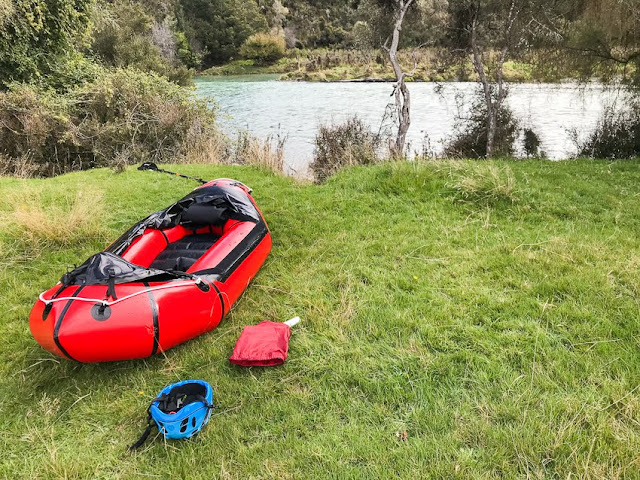 Another day I headed further up the Milford road, to hike Key Summit and Lake Marion. Key Summit is at the end of the Routeburn Track, one of The Great Walks, so very popular indeed. As it's only an hour from the roadend it's a very pleasant morning hike to take in some very spectacular views down the Hollyford Valley and also across to my afternoon's destination. 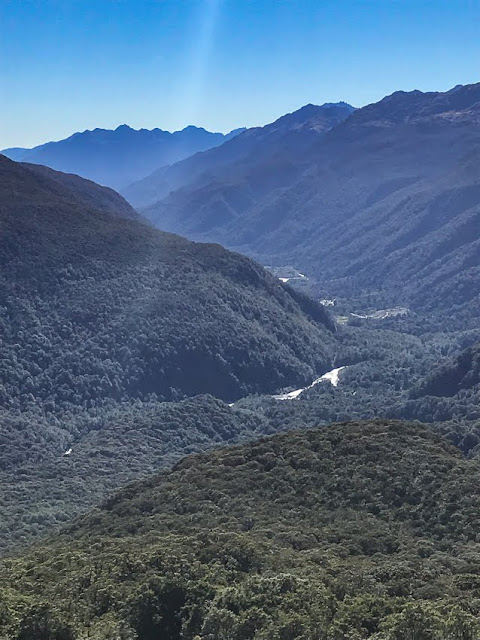 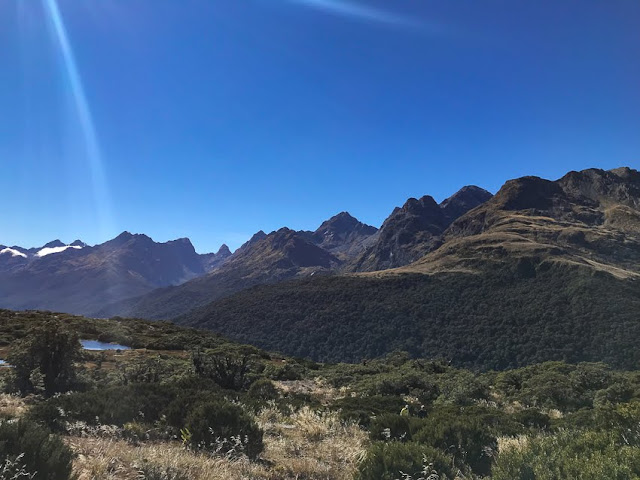 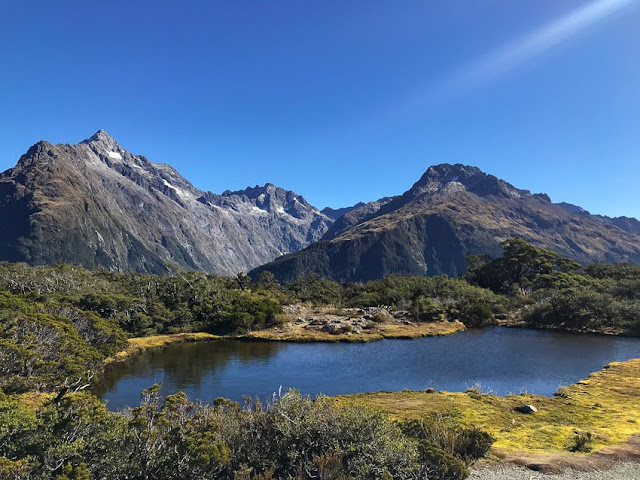 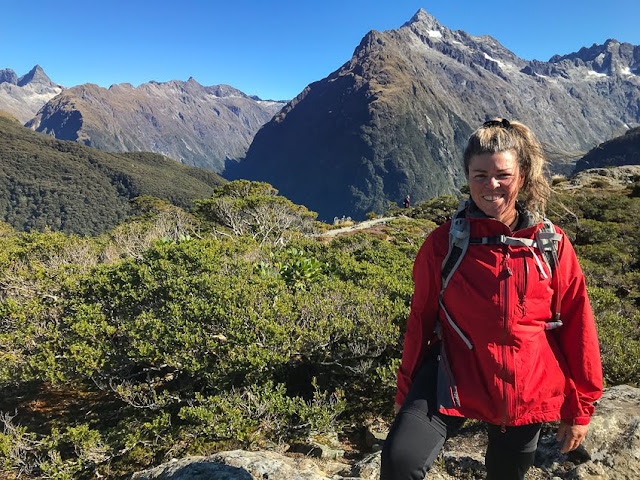 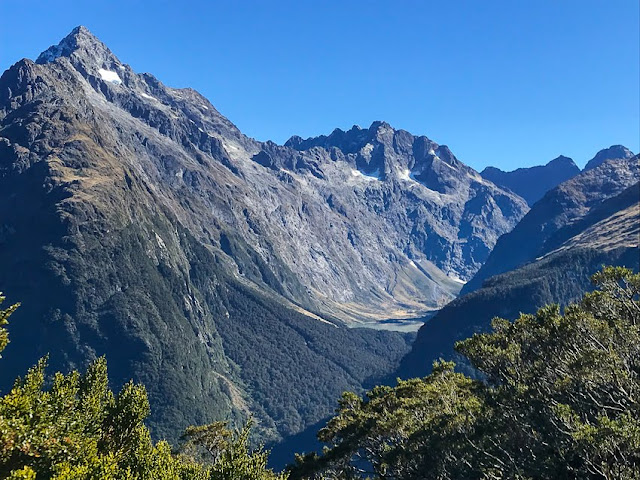 Lake Marion has been instagrammed to death. It's a beautiful glacial cirque lake that is easily accessible, although the track up to it does require appropriate footwear. There's a spectacular torrent of whitewater to visit via wooden walkways, but after there the quality of the track surface deteriorates exponentially. It's not a difficult walk by backcountry standards, but it's definitely a change from the well graded path on the other side of the valley! 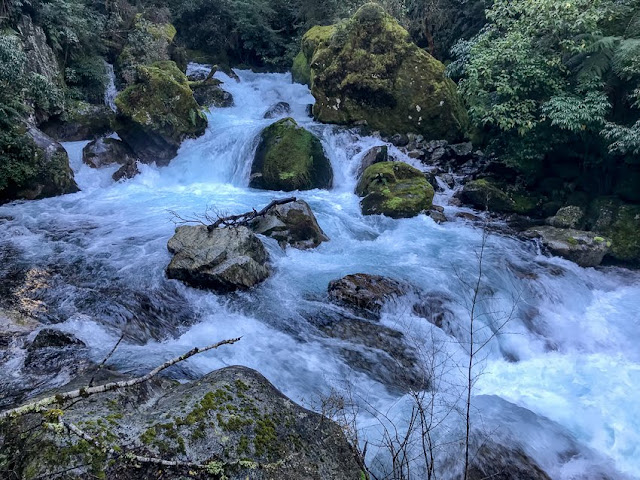 The lake is gorgeous, of course.... 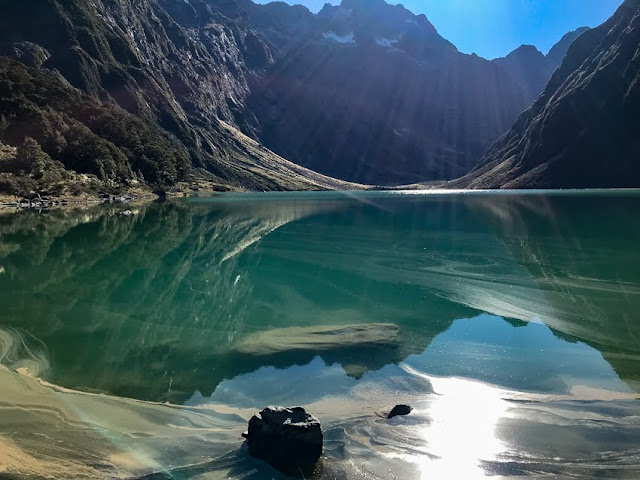 I got back to the carpark, by which time the sun had well and truly dipped below the peaks. But I didn't have far to drive, just down the Hollyford Valley Road to Gunns Camp. I stayed two nights in my little tent, as I had a plan to be up bright and early the next day to go paddle Milford Sound. In my packraft!

I was on the water by 8am. It was a lovely sunny day, the water was glassy, and I had the entire place to myself before the tourist boats started up for the day. 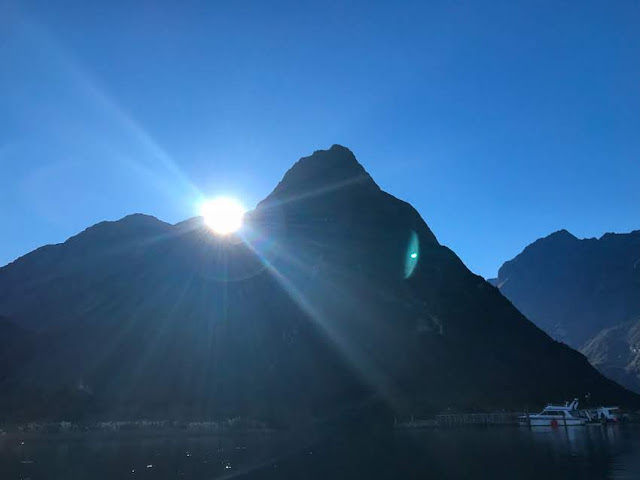 There hadn't been rain for quite a few days (this is extremely unusual in west Fiordland, where annual rainfall tops 8 metres!) so many of the waterfalls weren't pumping quite as much as usual. I paddled along the southern side of the sound, increasingly being overtaken by the numerous cruise boats, who all gave me lots of room and didn't cause too much wash. All the same, it did get somewhat annoying having to keep altering direction to avoid any risk of capsizing. 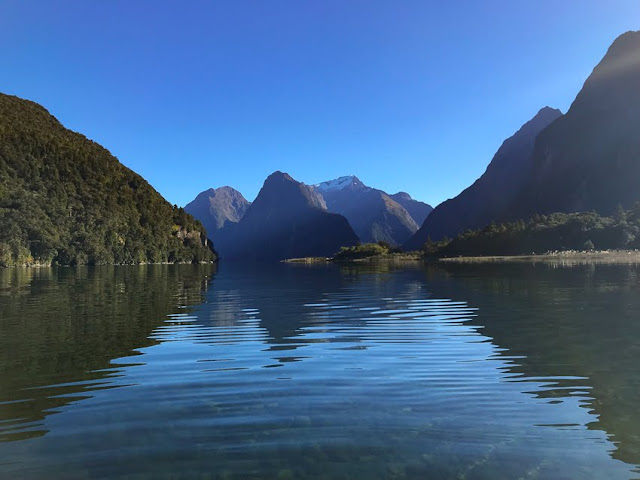 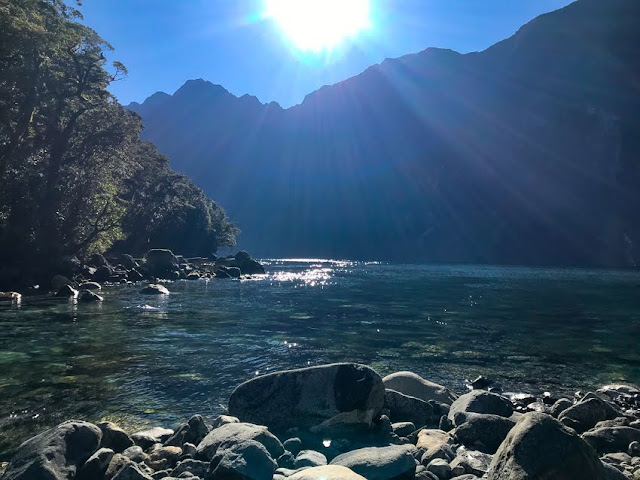 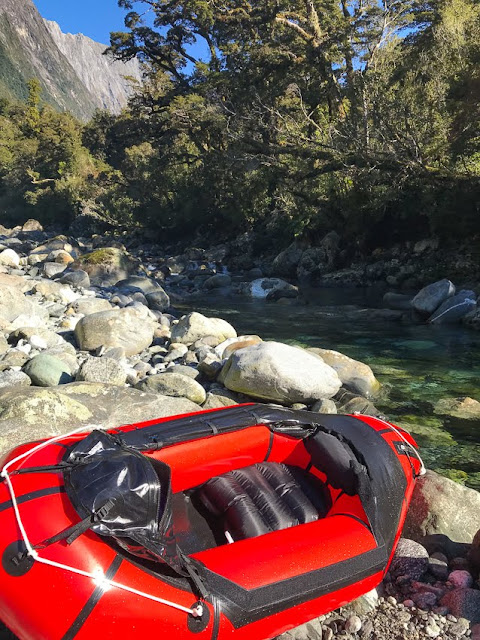 I stopped in a small bay not all that far from the heads and had lunch. A bunch of scuba divers turned up on a dive break and visited the waterfall behind the beach, so I did too. The sandflies weren't too bad, although most of me was protected by my drysuit.... 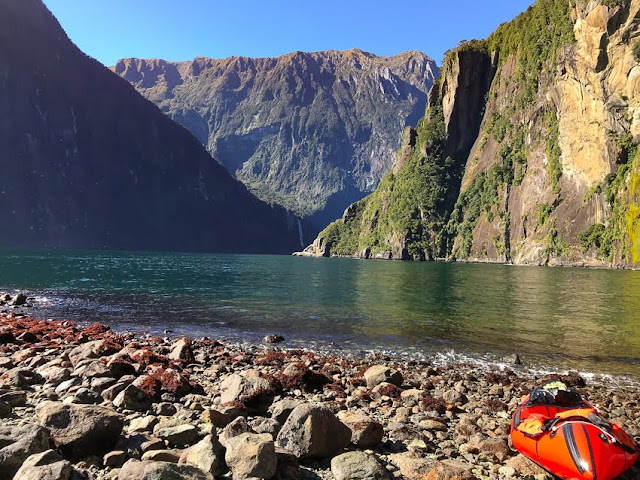 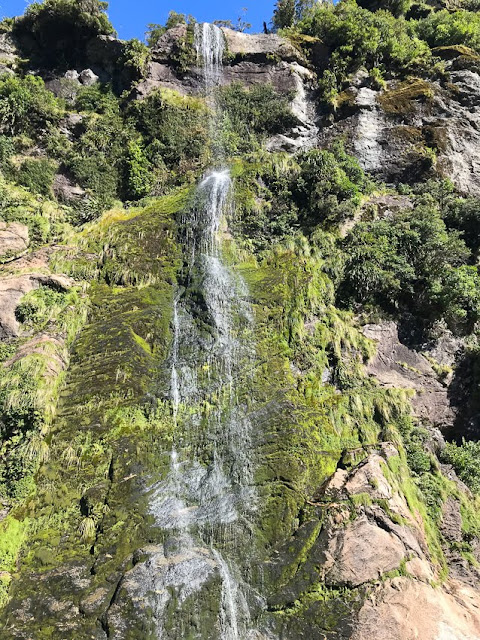 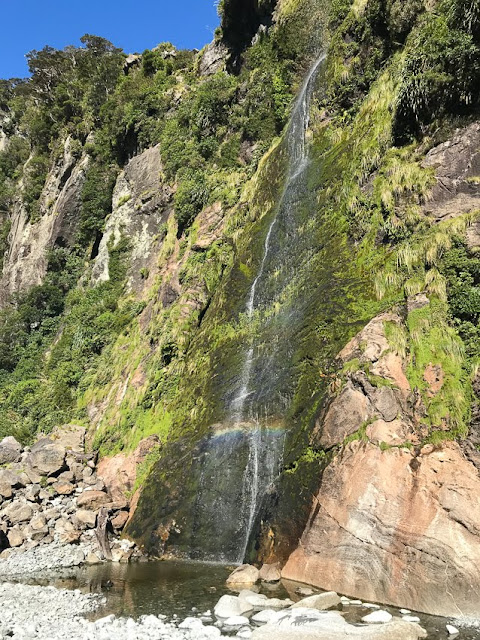 On the paddle back I crossed the sound to the northern side, in order to pass the big waterfalls on that side. Luckily there was only a light wind, and it was a westerly, so it wasn't too difficult a crossing, and again the tour boats gave me enough room. I wonder what all those tourists thought of that sole paddler in her inflatable craft.... 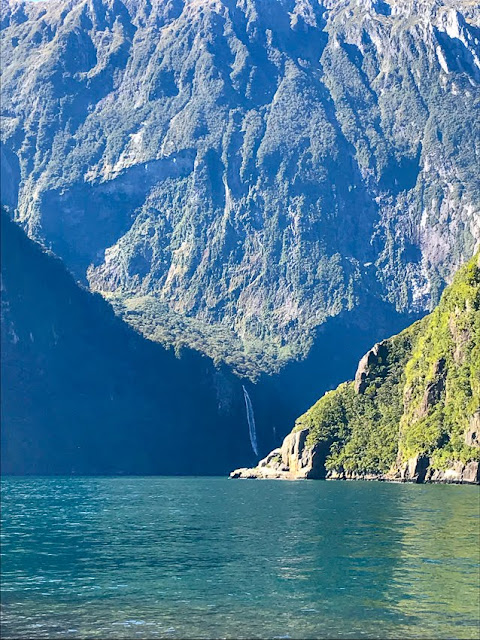 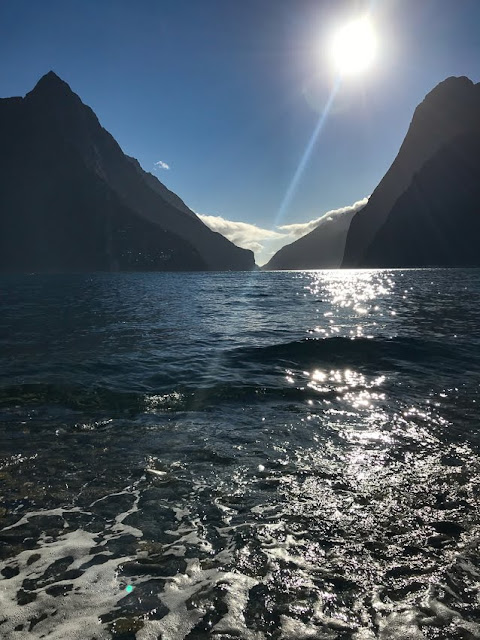 Later in the afternoon the wind picked up, but since it was a westerly it simply helped blow me back down the sound to the boat ramp. I got back just before the sun went down, which it does early when surrounded by high peaks. I was glad to only be driving a few kilometres back to the Hollyford Valley after such a long day on the water.

The next morning it was nice to have a lie in and take my time drying all my gear and tent before packing up and driving back to Te Anau.  But first my packraft needed a name! 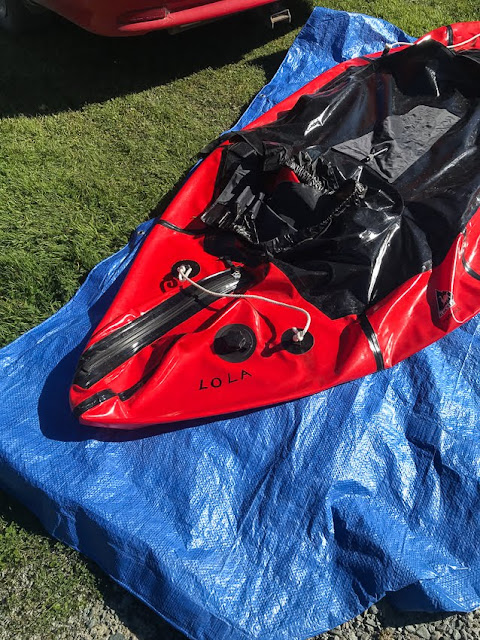 The following day I was heading down to Manapouri to take the boat across the lake to West Arm and down to Deep Cove to do some volunteer work with Permolat Southland. This is a small group of Southland based volunteers who help maintain backcountry huts and tracks that DOC no longer has the budget or inclination to continue doing. It's a spinoff of the very successful longer running west coast based Permolat group. Permolat, by the way, is the brand name of the aluminium blinds common back in the 70s. They make great track markers when cut into squares and nailed to a tree! 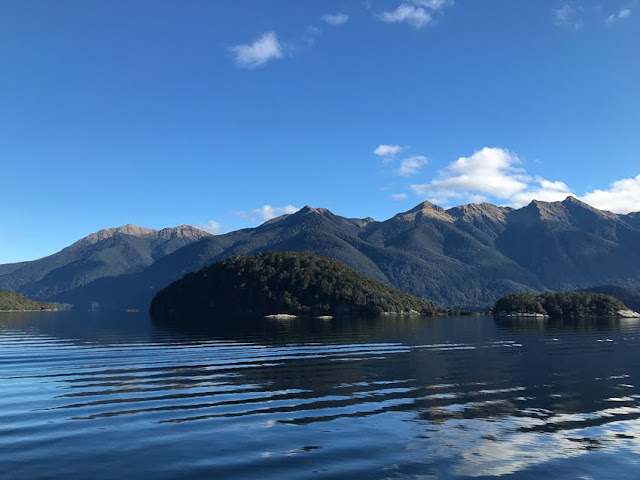 We were there on the invitation of the Deep Cove Outdoor Education Trust, which has a hostel there for school groups, as well as providing accommodation for the regular public. It's pretty busy over Easter with lots of boats being driven over Wilmott Pass to spend a few days fishing in Doubtful Sound. We, however are there to do work! 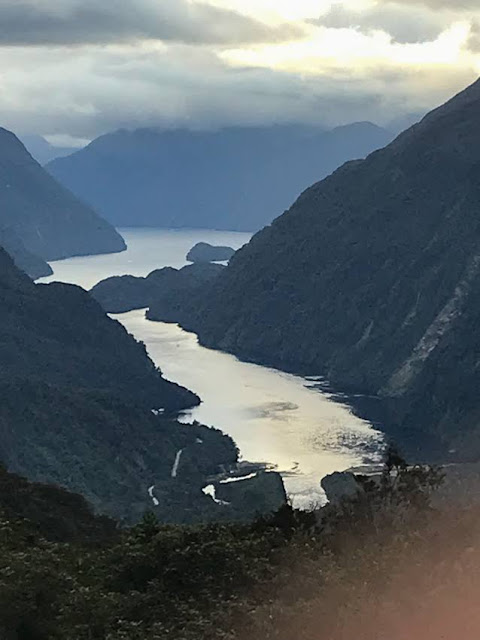 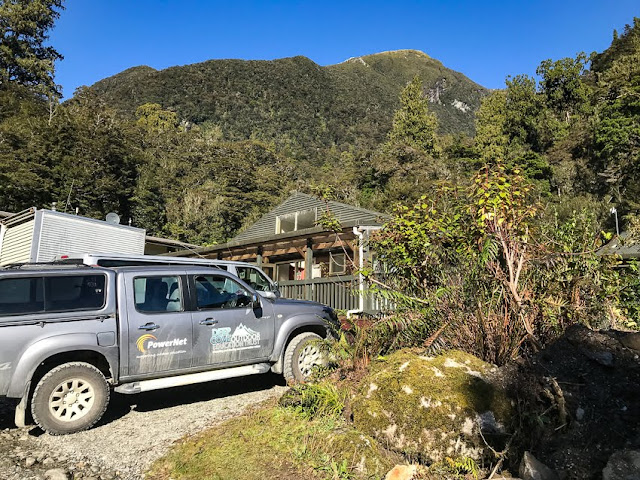 On our first day we split into two groups of 3. Wally, Stan and I cut a trapping track and installed 50 rat and stoat traps. These traps are loaded with a gas canister and should a critter be attracted by the chocolate smelling bait and stick its head into the trap, a gas powered needle goes through its brain and it is humanely dispatched for the local Wekas to feed on. 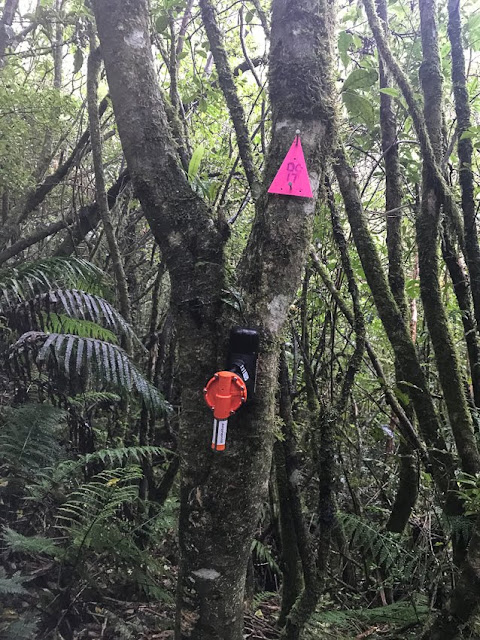 NZ had no land based mammals aside from bats before man arrived. Rats came with the Maori, deer and rabbits were introduced by European settlers for hunting, and possums for a fur trade. Stoats were introduced to try and control the rabbits, which failed dismally. All these mammals have impacted disastrously on habitat, as well as devastating native bird populations through both competition and predation. Because NZ birds evolved without any predators, even the ones that can fly frequently nest in ground crevices, where their young are vulnerable to attack. It is common to go tramping in NZ and not hear or see much birdlife. You really celebrate when the birds are there!

All over New Zealand traps are being set to catch these out of control predators. All levels of community are involved, from large government organisations like DOC, to hunters, trampers and even school children who manage local traplines. The job is so huge that anyone can get involved, with the full backing of government conservation groups.

In recent years there has been an increasing use of a nasty poison called 1080, which can be dropped by air in pellet form over inaccessible country, and is extremely effective at reducing predator numbers. It has caused a huge polarising debate in NZ, with anti 1080 protestors using the same illogic and tactics as antivaxers. Despite the science, the anti 1080 brigade spout the usual conspiracy theories, and recently have started threatening and attacking DOC workers. 1080 is also used extensively in Australia, to control feral foxes and cats, and although it is not a pleasant way to die, there is no alternative in NZ if there is any chance of preventing extinction of a huge amount of native birds.

Whilst we were setting our high tech traps, Alastair, Gavin and Ross headed off to cut an unused track behind the hostel up to a lake. They had a much harder job as the path was almost vertical and overgrown after not being used for many years. They didn't make it to the lake, as the rain began to set in mid afternoon making work with power tools somewhat difficult.

The next day the rain was really heavy so we decided to postpone track work until it eased. Whilst the others read books or helped with the new classroom being built, I inflated my packraft and went for a paddle! 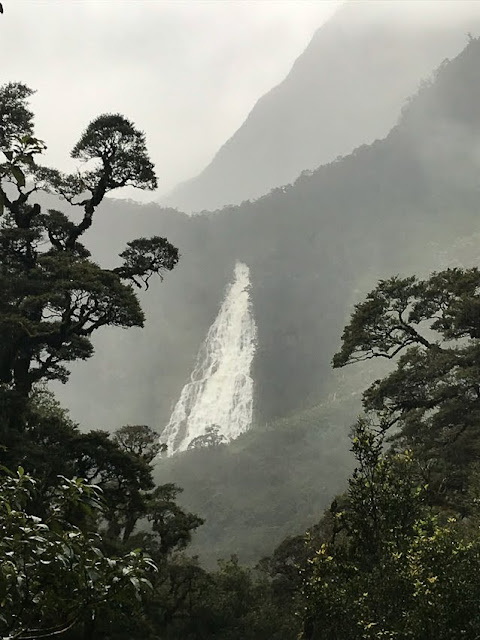 Both Stan and Gavin are also packrafters, and their adventures crossing numerous alpine passes and waterways makes my meagre adventure up Titiroa seem like a walk in the park. I mine them for all sorts of information, and even manage to borrow Gavin's Moir's South (which is out of print and the best resource for backcountry tramping in Fiordland) and scan as many pages as possible. Neither of them had thought to bring their packrafts, so it is just me, out in the rain, paddling past some spectacular waterfalls. I need to go back and spend more time there.... 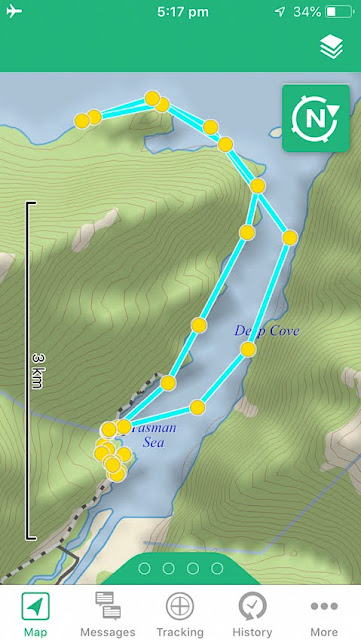 The rain begins to settle late afternoon, too late to do any work, but the next morning we head off up the road to cut another track to a view point. The old track markers are almost impossible to find, so it takes us all day to cut less than a kilometre!

On the way back we visit another waterfall. 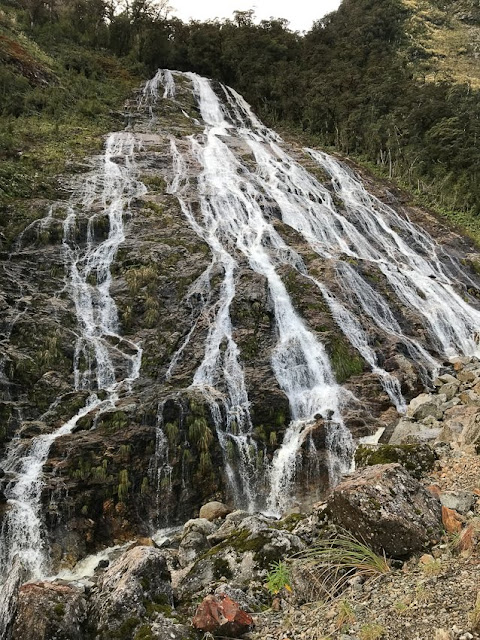 And as it's my birthday, the boys have made me a cake! 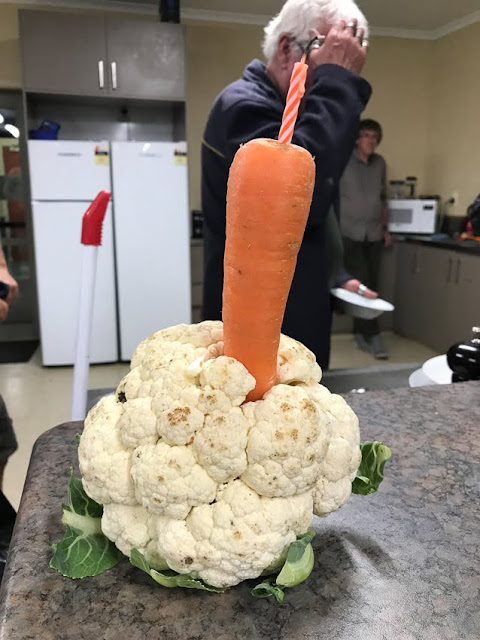 Finally it's time to drive back up Wilmott Pass to West Arm for the ferry back to Manapouri. Wally is keen to visit West Arm Hut, the first hut on the Dusky Track, mainly so he can tick it off on Hutbaggers! I will too! 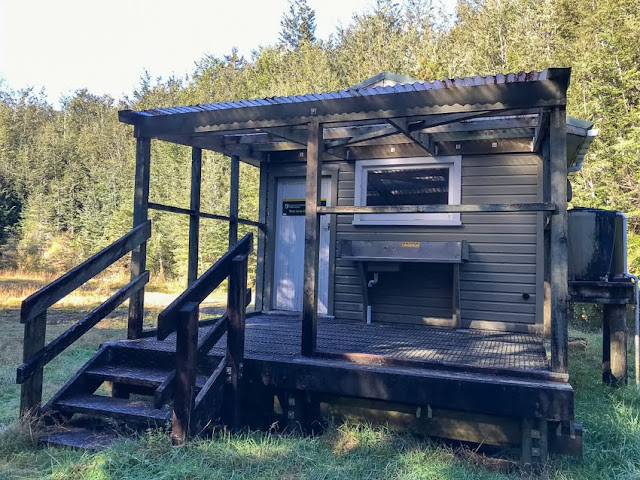 We load all the gear back on the Real Journeys boat and head back to civilisation. I say farewell to my new friends and head off for further adventures...