Last year I successfully passed my Level 2 Ski Instructor qualification. I already had my Level 1 qualification but a Level 2 gives you the sort of skills that make you internationally employable. Although it won't necessarily get you a work visa! 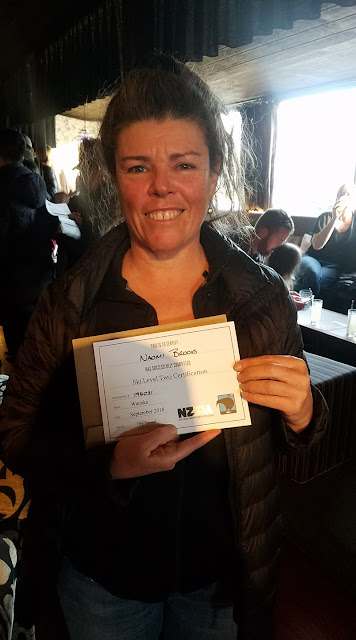 The biggest issue for me getting an overseas work visa is my age. Being a few decades over the magical cut off age of 30 (35 in some countries, but yeah I missed that one too) I can't go swanning off on a working holiday visa and jag myself a job on a skifield. I need to get an employer to sponsor me, which they aren't going to do on a whim. Particularly without any experience!!

Many reasons, the main one being that the mountain is mostly advanced terrain. Which means most skiers coming to Treble Cone can already ski. Ski schools make most of their money in two areas: beginner lessons, and private lessons. Private lessons will go to those instructors with most seniority through a priority system that rewards qualifications and loyalty. My standing is so low that I would just be left with beginner lessons, and there aren't many of those at Treble Cone. So I wouldn't get any work.

Contrast that with Cardrona, which is so busy with lessons that I had all day work every shift I was rostered, and during the very busy school holidays and August I often had a couple of one hour private lessons as well as four to five hours of group lessons. Admittedly towards the end of the season it dropped off, but I only once had the situation of turning up for work and being told I wasn't needed.

A huge advantage of Cardrona, as compared to TC, is it is an awesome mountain to teach beginners on. This is because the terrain is so perfect (ok it's very flat!) for progressing even the most timid and anxious new skier. Since an instructor is in the business of creating an enjoyable experience so the punter comes back for more, there's a considerable advantage in not scaring the shit out of a complete beginner. TC, with it's steep terrain, can do a damn good job of being terrifying!

Cardrona gave me a job, which is quite an achievement as jobs there are hard to come by due to low attrition rates. I can only claim my success to be due to their need for a stable of part timers who are flexible: instructors who can work more when it is busy, and don't need the hours when it's quiet. And they also don't need to sponsor me with the requirement of providing a minimum number of hours per week. 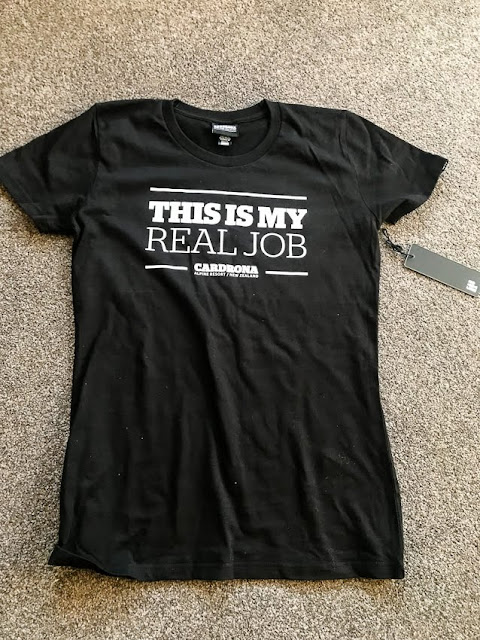 I initially said I'd just do one day a week, but come June there was still not enough snow for TC to open and I was getting hopelessly bored. So I ended up doing 3 days a week. 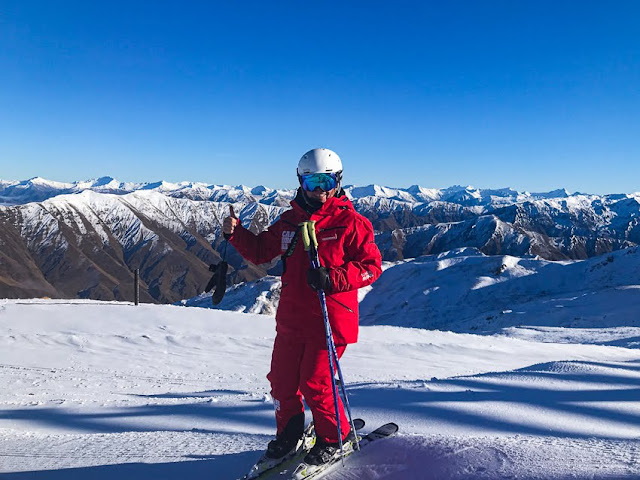 I enjoyed every minute of it. The crew I was working with were all really friendly and supportive. I'd ended up getting a locker in the locker room next to some of the oldest and most experienced instructors at Cardrona, and they were great to learn from as well as unburden with when things didn't quite go to plan. Which happens more often than any of us would like to admit. 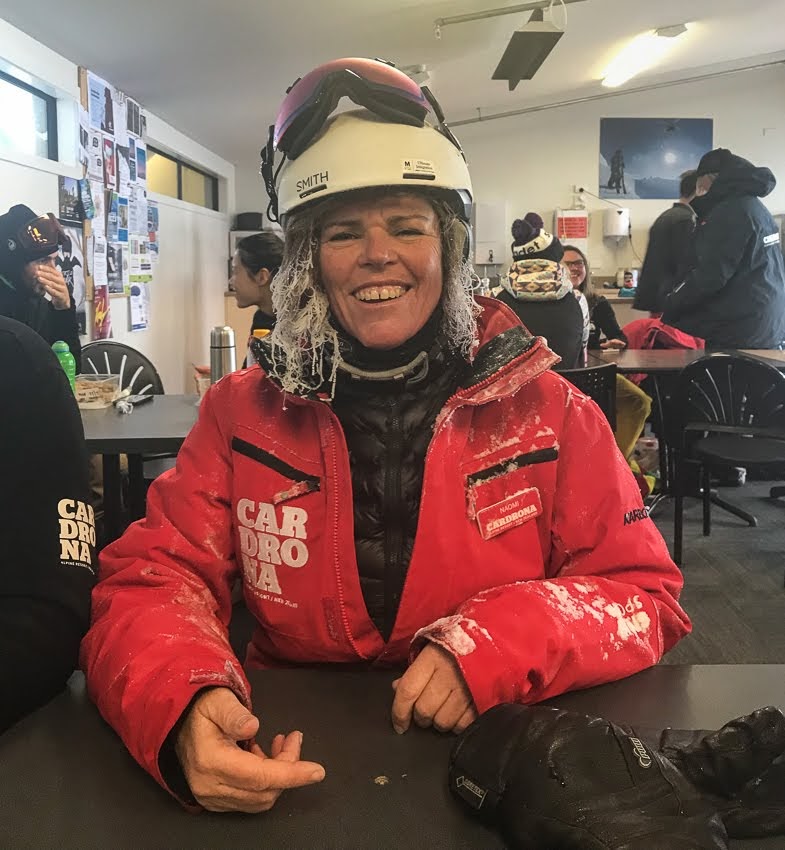 Sometimes I had adult first timer lessons where the group size was well over 10. This is quite a baptism of fire because fitness levels in a group that big can vary hugely, and some people acquire the basic skills much quicker than others. Learning how to manage both group dynamics and coaching people at different stages in their progressions was a great learning experience for me. And then there are the kids… 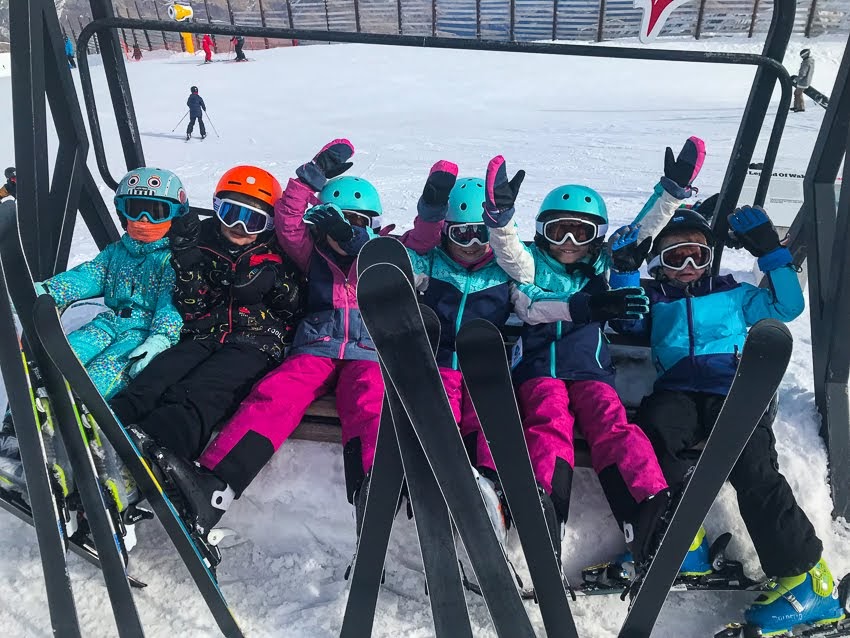 Children are easier, in that they learn through experiential learning rather than instruction as to how to do something. Plus, though there are exceptions, they are fearless. You just show them what you want them to do and get them to mimic you. And you make as much as possible into a game. Of course you have to customise it to their developmental level, but I seem to have a natural ability to assume the age of my students, whatever it is. Yes, I can even chuck a good tantrum given the opportunity!

Jokes aside, being older with more life experience gives me a whole load of other advantages when it comes to teaching kids. Firstly, their parents trust me. I'm not some 18 year old taking charge of their precious kids for the day and they make assumptions as to my experience based on how old I look. I don't tell them it's my first year teaching of course. And secondly, I'm well attuned to picking up when the kids are starting to show signs of fatigue and I'll interrupt the teaching for some play time. 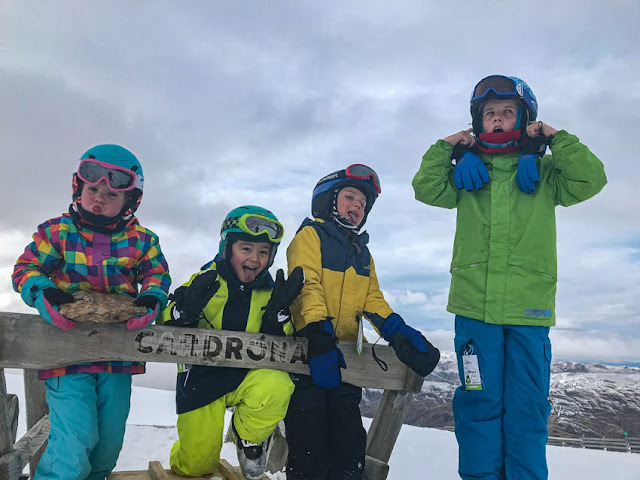 The shit side of teaching kids is the shit kids. Usually they have arsehole parents so it isn't really their fault, but from time to time you get kids that just won't even make an effort to join in with the group. Mostly I try to create a sense of group solidarity, where the kids themselves will help and support each other, but sometimes you get a kid that just doesn't fit. And worst case scenario, skis off on you!! Luckily for me, I managed to catch my one potential runaway before he got too far, and we negotiated an agreement where he got one choice of where to ski, and then he had to agree to ski with the rest of the kids' choices. The other option, of course, is to suggest the parents book their child for a private one on one lesson. Arsehole parents don't often do this however….

I still managed to do some adaptive volunteering, although not as much as last year. I skied again with Finn and Sean, and managed to take a video of Sean's expert sit ski bucketting.


Finn and Sean from Naomi Brooks on Vimeo.

I've become good friends with Finn and his family, who live in Dunedin and come up a few times each winter. They are an awesome family that just do what they need to do given they have one child with a severe disability. Whilst Finn still wants to come skiing, Sean will take him, even though their younger son has now decided skiing isn't really his cup of tea. Sean's true passion is ski touring, so I asked Sean if I could join him on some upcoming day trips. 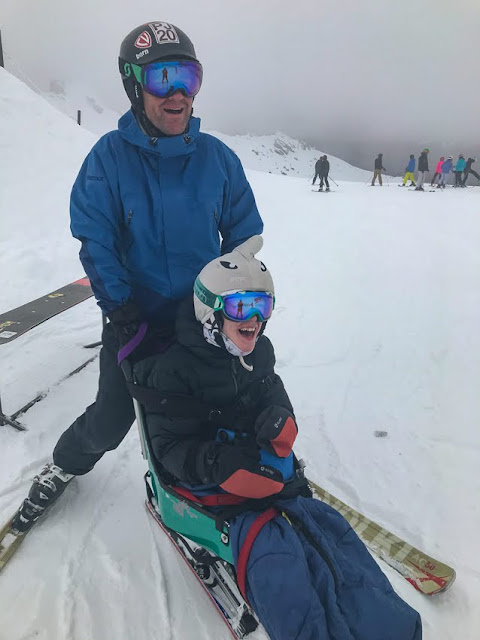 Unfortunately I didn't get as many days as usual skiing at Treble Cone. Mostly because of the late opening at TC, but also because I was working 3 days and then also volunteering a few days at Cardrona. I'm not totally sure I got my money's worth out of my TC season pass this year....

I also only managed one day over at Ohau this year, with Janey and a few of my Cardrona colleagues. This time I hiked right up to the very top of the big bowl and got a nice long run down. The conditions weren't awesome, but the view certainly was! Unfortunately I also got a speeding ticket on the drive back to Wanaka. Thankfully the fine wasn't too onerous.... 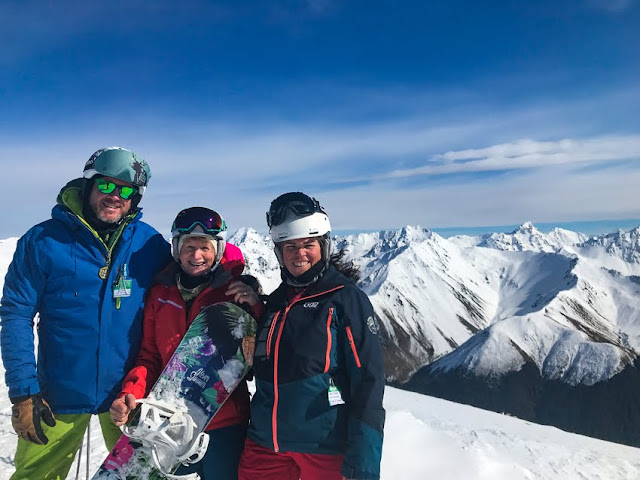 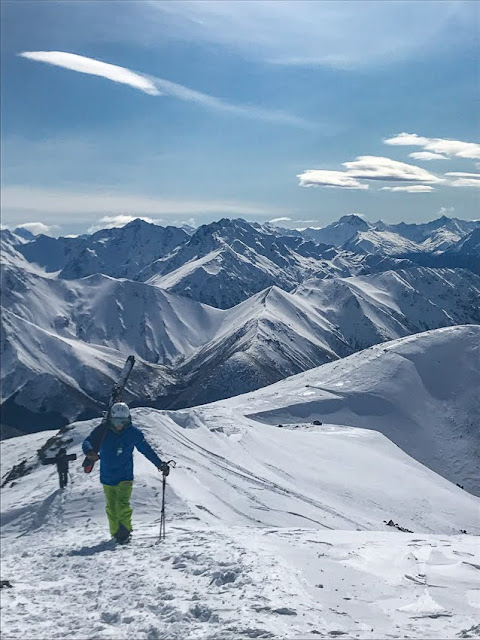 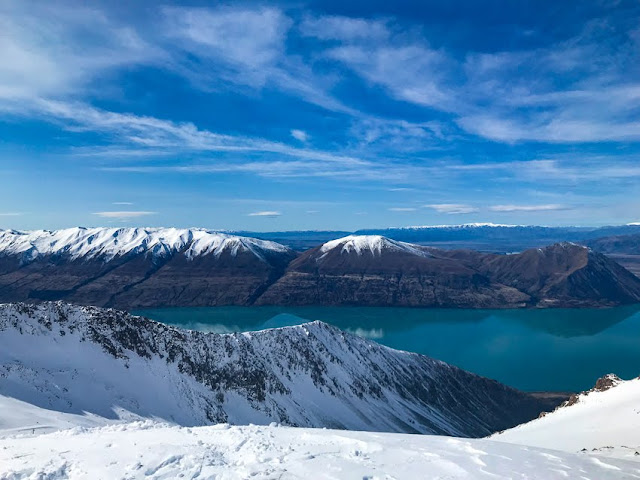 In the second week of September Sean, I and my Alaskan ski touring friend Jennifer (remember her from The Invincibles trip?), as well as a friend of Sean's, headed out the back of Cardrona for a bluebird day shredding fresh snow, and then just the three of us did it again the next day out the back of Treble Cone. This year I had bought new touring boots and bindings for my skis, which made walking up hill considerably lighter and easier. It's exhausting work, but exhilarating! And I'm now understanding the joy of the rhythm of skinning up a slope. (For the uninitiated, you apply synthetic "skins" to the bottom of your skis which prevent them sliding backwards, you release the heel of your ski binding, and you walk in a sliding motion with your skis up a slope, because there isn't a chairlift to the spot you wish to ski down from). 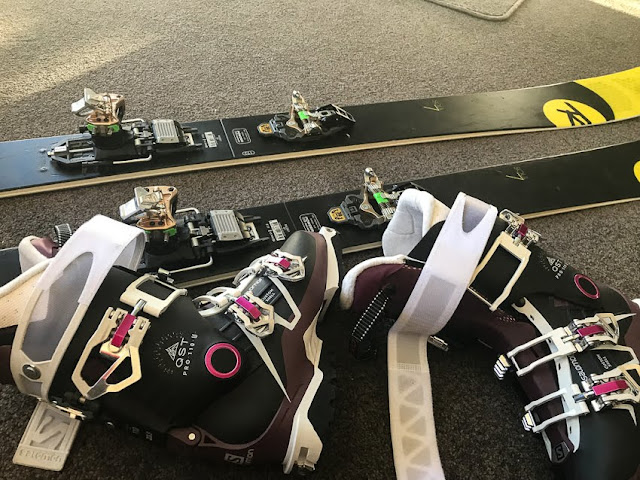 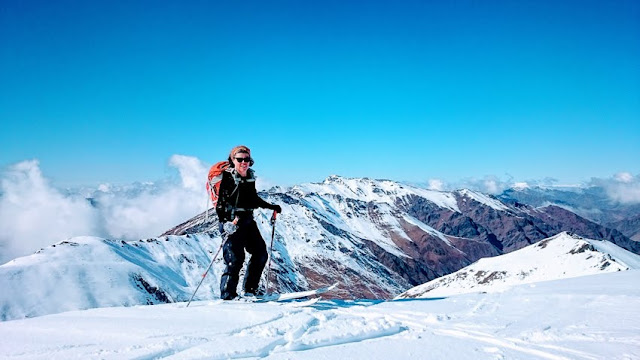 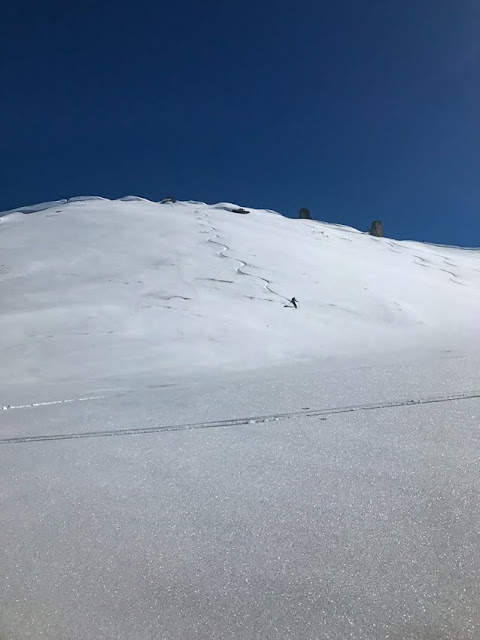 At the end of the season I sat my adaptive ski exam. Just the Level 1, but it required us to have competence bucketting and tethering sit skis, actually skiing in a monoski, ok a J turn but it's easier said than done, teaching skiing for 3 track, 4 track, and a bunch of physical, cognitive and visual impairments. It was a great 3 days with an awesome group of participants, with my current hero Christine being our instructor. She can bucket and tether a sit ski whilst snowboarding! And yes I passed.


Adaptive skiing: bucketing and tethering a sit-ski whilst snowboarding from Naomi Brooks on Vimeo.

By the end of September things were quietening down considerably on the work front. Because I was part time, and frankly, didn't need the work, I was happy to reduce my hours. But then mum started having more health problems so I decided to leave Wanaka and head back over the ditch to spend some time with her to give my brother the chance to go on a family holiday to Tasmania.