Because I am usually somewhere else in the world but New Zealand each January, COVID-19 travel restrictions gave me the opportunity to at last attend a Packrafting NZ meetup. It's still a fledgeling community so opportunities for me to meet other paddlers have been scarce.

I've been lurking on the various packrafting facebook pages and it's pretty clear to me that the focus seems to be on high adrenaline runs in Grade 2+ rivers rather than what I'm interested in. Yes I would like to feel confident and skilled running Grade 2 rivers, but the purpose for me of having a packraft is to combine it with tramping. My focus isn't on running the river, but using the river as a viable route on a tramping trip. 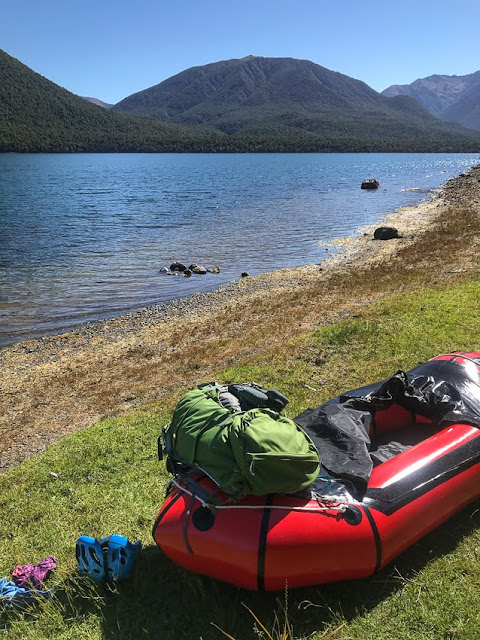 Because I usually paddle alone I restrict myself to really easy rivers and flatwater. The Packrafting meetup is about running up to Grade 2 rivers so I booked in to a skills course beforehand. In my initial course with Arno 2 years ago I had learnt the basic skills of self rescue, swimming a rapid safely, catching eddies, ferry gliding and assisted rescue with a throw bag. Since then I have to admit to mostly floating down those easy rivers rather than spending time practising those skills. 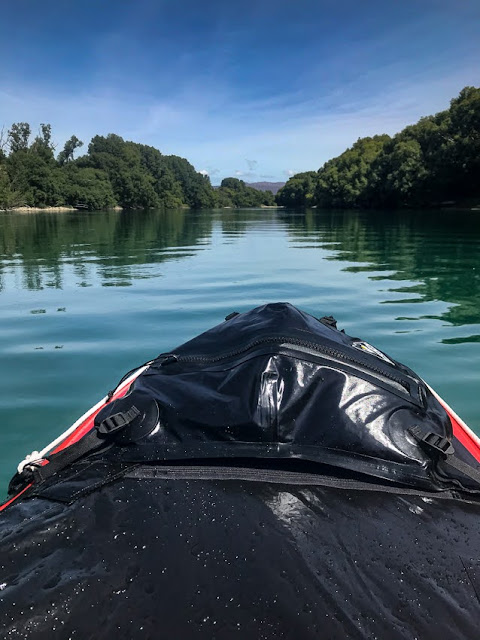 Huw's course, usually based out of Queenstown but this time in Murchison and joined by Daan from the NZ Kayak School, was a step up from Arno's course, with more gnarly rapids to run, and swim across!, as well as more emphasis on team work and assisted rescues. My eddying skills had definitely improved over the 2 years, but this was the first time I had been exposed to the use of thigh straps in packrafts.

My boat is very basic, with a blow up seat and backrest, which means I have no back support, and because my legs are short and I have nothing to brace against I continuously slide forwards meaning maintaining an upright posture whilst paddling is hard. Thigh straps hold one's legs against the side tubes, making edging the craft much easier. I don't have them either. 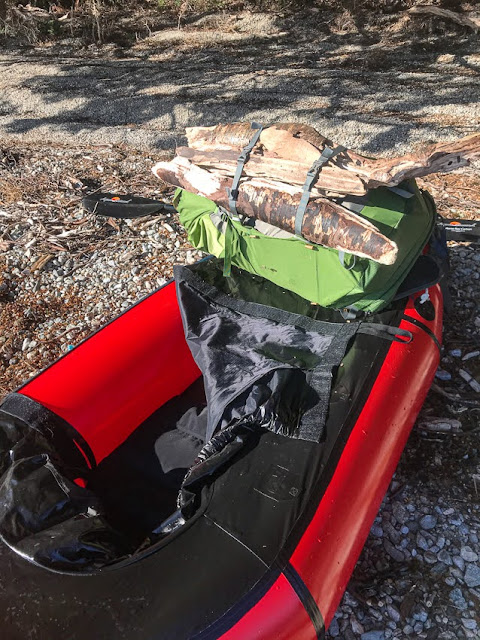 I don't have any of these modifications because they all mean a heavier boat to carry around. That's the trade off....

So I made do, managing to edge my boat enough to catch the eddies, just as effectively as the others with their thigh straps. But it's hard work, continuously having to slide oneself upright again. Getting some sort of inflatable bag to brace against for my feet and/or changing my backrest to something more supportive may be a modification I need to make. But I'm still wary of pimping my boat too much.

After two days running rapids on the Buller and Mangles I had a couple of days off before the Packraft Meetup began. Mostly because it rained, a lot! There was another group doing an intermediate course with Huw also staying in Murchison and going to the meetup, so I met up with them and gained some new friends, some of whom also like tramping.

The rivers kept rising, the temperatures dropped and snow fell to 1000m ASL. It wasn't summer any more, and the rivers were now super pushy. It wasn't going to be an ease into paddling Grade 2 rivers for us newbies, it would be Grade 2+ from the get go!!

Our first afternoon we had a lake session where we practised self rescue and assisted rescue. I used to be able to pull myself into my boat, but I can't anymore. Strength, technique, energy? Something is missing. I definitely need to spend some time practising this crucial skill before I can be anything but a liability in a group. I already felt on the backfoot, and then things got worse....

The first full day we headed up the Rainbow road to run the Waiau between St Ronans Well (requiring a 5km tramp in to the put in) and Slip Flat, supposedly an easy Grade 2 run. But with river levels at least twice as high as they had been when the organisers had scoped the runs a few weeks previously, it was much more pushy. I managed to paddle down, only tipping over once, but I didn't enjoy myself. Mostly I was scared, bad adrenaline vs good adrenaline. Only on the last rapid did I actually let out a whoop of joy as I paddled through the wave train to eddy out at the take out. I wasn't alone, many people had found that run challenging and somewhat out of their comfort zone. The organisers had only opted for this run because it was the least challenging of all the rivers available!! God help us!!! 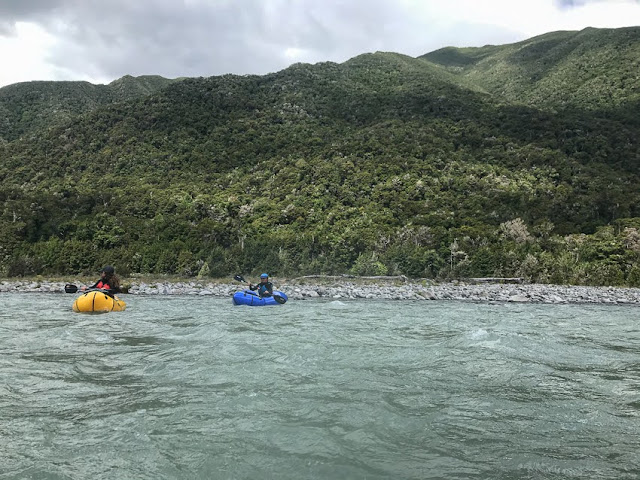 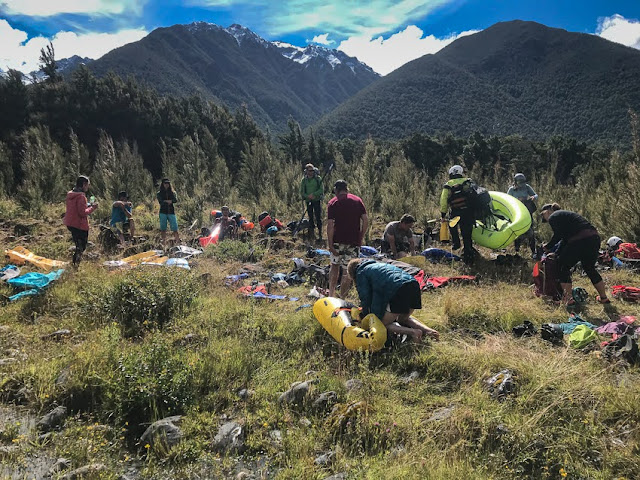 Day 2 we ran the Buller, with some getting in higher whilst the rest of us dropped in below Granity Rapid, and paddled to Owens River takeout. Cars were used to shuttle between the put ins and takeouts, like we had done on our course, and some paddled further down the river whilst a small selection of better paddlers ran the Source of the Buller, a gnarly boulder garden where it exits Lake Rotoiti at St Arnaud. I opted to only do the middle section, my confidence shot to pieces. 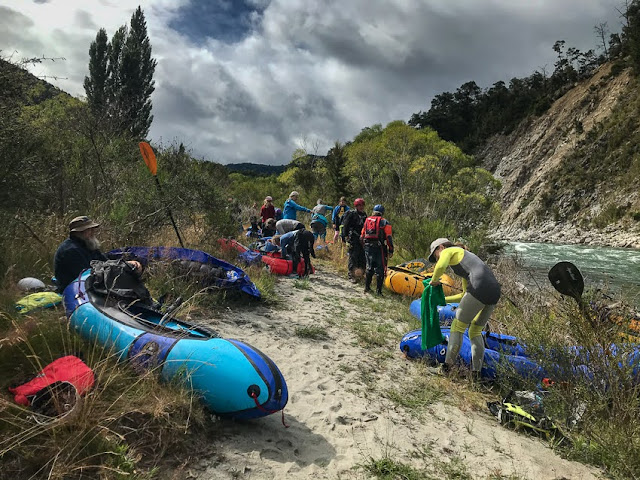 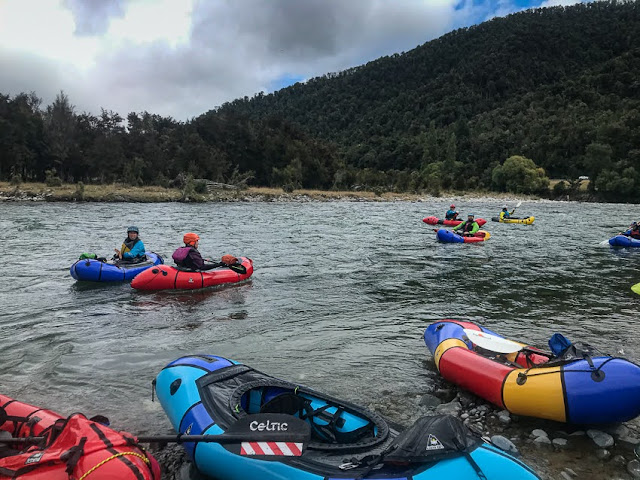 The final day saw the North Island bound paddlers leave for their ferries whilst the rest of us headed back to Murchison and a run on the Matakitaki. The rivers were now dropping and this was a much cruisier run, with scenic gorges to float through, as well as some adrenaline rapids. Those who wanted more action went to run the earthquake rapid instead, a Grade 3-4 rapid I doubt ever to have the inclination to attempt!!

A few of us stayed the night in Murchison, hatching plans for trips. I got invited to join a couple planning to tramp up to a hut in the upper Matakitaki and float back down. They were super experienced packrafters from Australia and the trip sounded within my comfort level. So I agreed.

We headed off in my car the next morning, up the Mangles valley and then over to rejoin the Matakitaki much higher up than where we had paddled the day before. The track basically follows the river the entire way to Downies Hut, one of the oldest DOC huts in Nelson Lakes National Park. 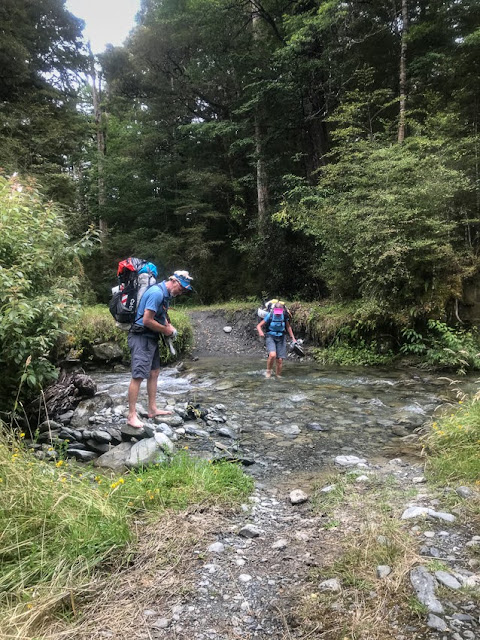 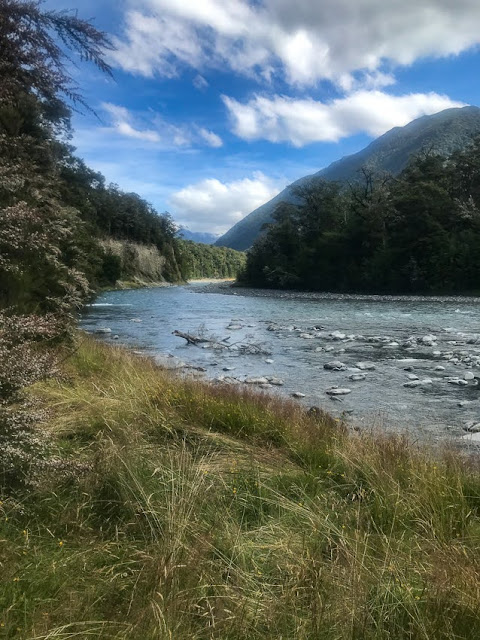 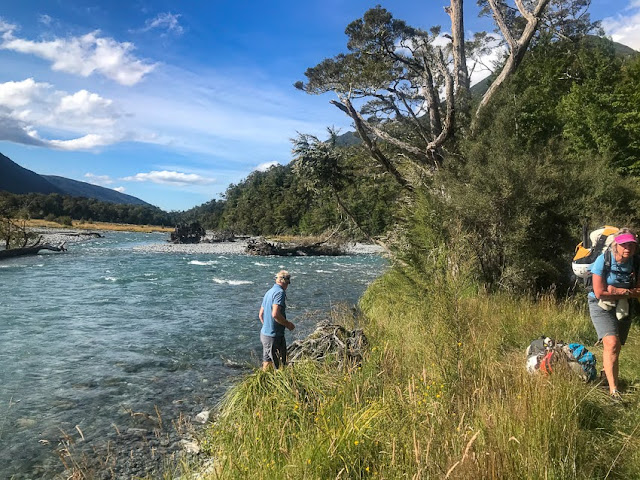 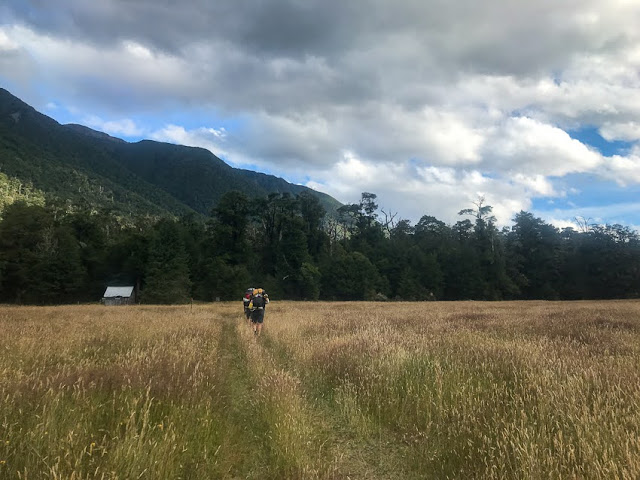 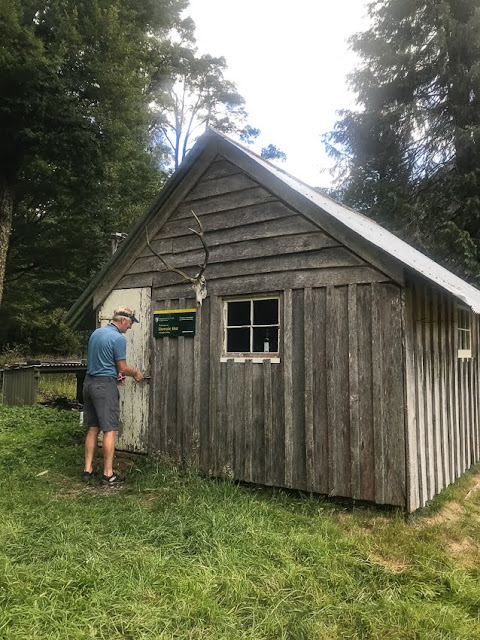 The next morning we walked up river a bit more as Kelvin was keen to find some features to play in. He's a really skilled paddler and a joy to watch. He and his wife Liz have been packrafting for at least 10 years! 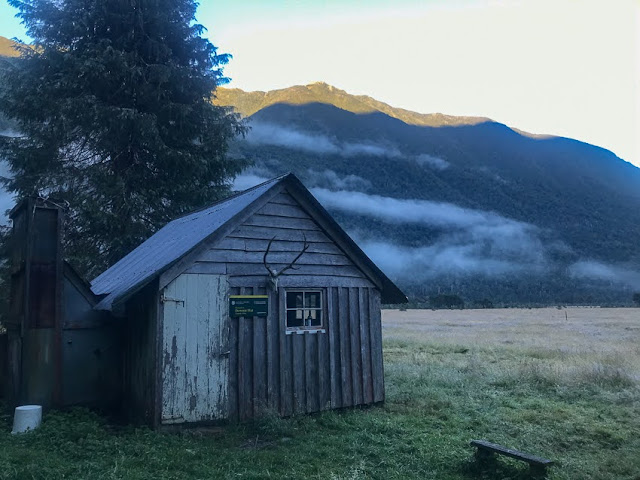 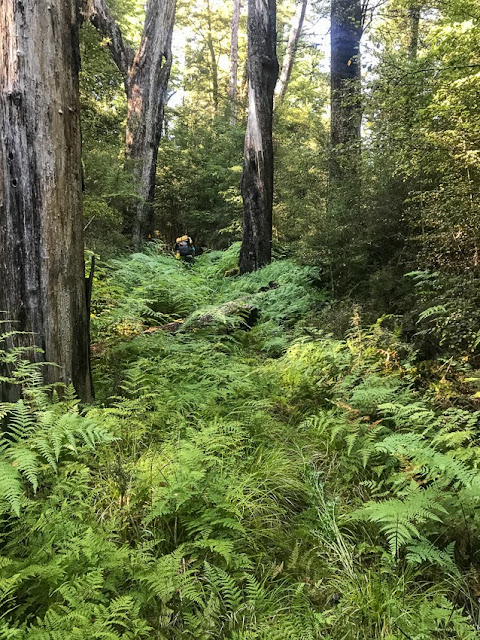 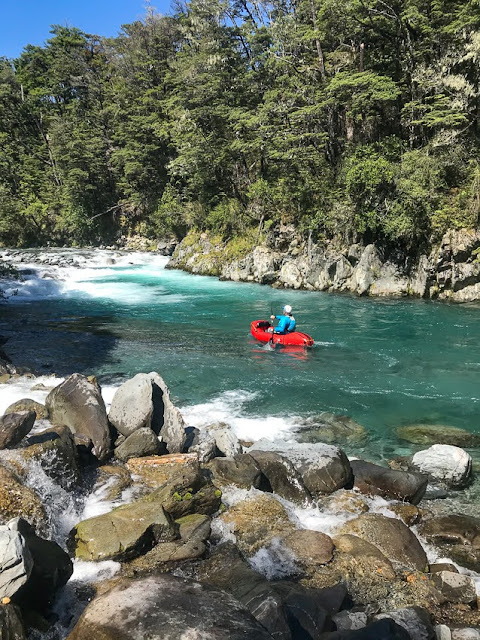 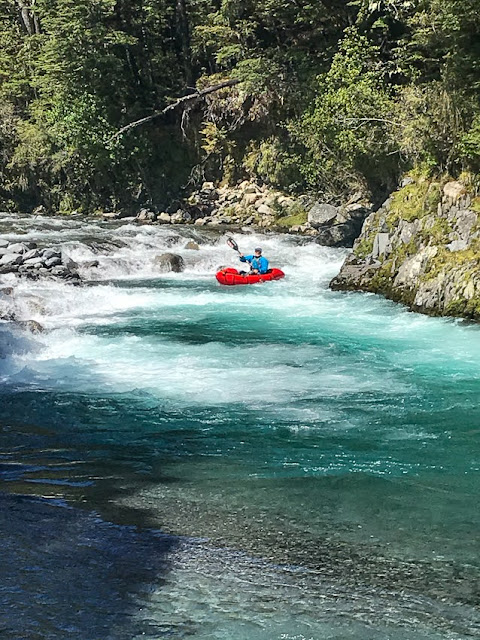 Each of us put in at a spot we felt comfortable running, with me putting in the lowest. Then we headed down river. The rapids were all pretty easy, except for one with an overhanging tree, which Kelvin only spotted halfway through running it and skilfully avoided. Liz managed just to miss it with an effective ferry glide, whereas my skills weren't up to the task and the current took me onto it. Luckily it was just an overhanging tree and not a strainer, so me and my boat got easily washed under it and I surfaced on the other side and jumped back in my boat. 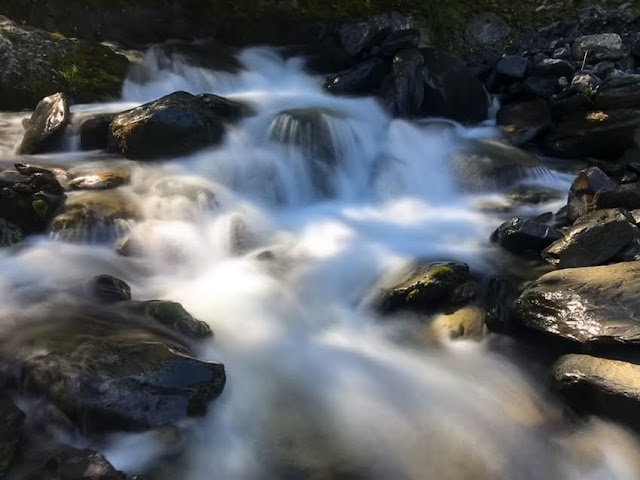 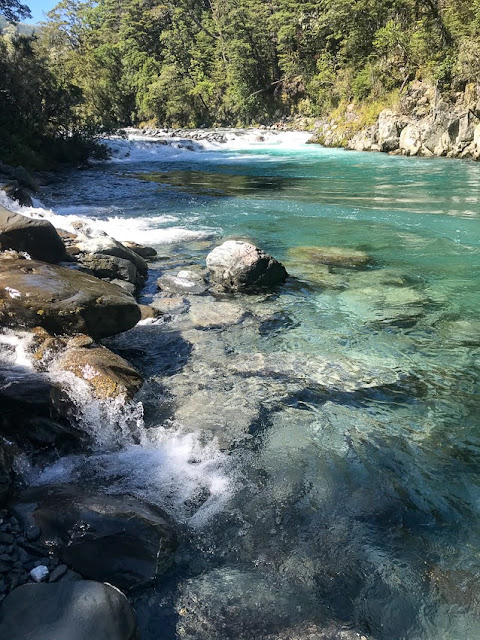 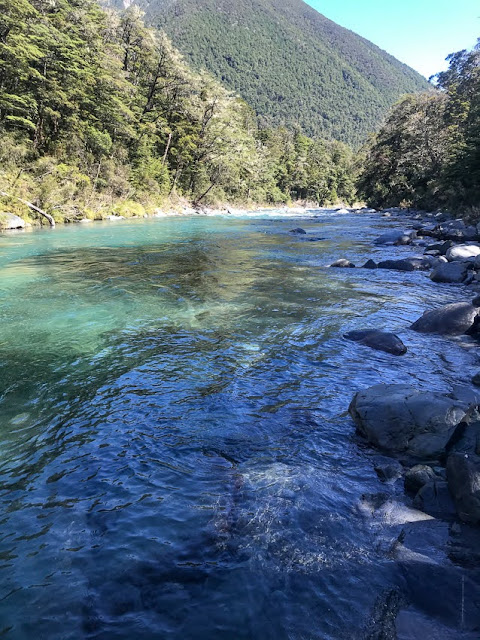 This little incident got Kelvin rather worked up so he suggested I practice my ferry glides when we got to a nice easy shale rapid. We pretended that there was a tree on one side and I had to ferry glide across to the other side. So I headed down there, angled my boat at the appropriate angle upstream and paddled myself across the river, avoiding what I thought was the spot I was supposed to avoid.

Then the others came down to me, effortlessly gliding across the current from one side to the other. Kelvin paddled up to me and began somewhat rudely telling me off. Apparently I was supposed to wait for him to lead and that wasn't a ferry glide, that was paddling across the river!! My problem was I didn't listen he said, and I needed to start listening. How to ruin a perfectly lovely trip in one verbal exchange! 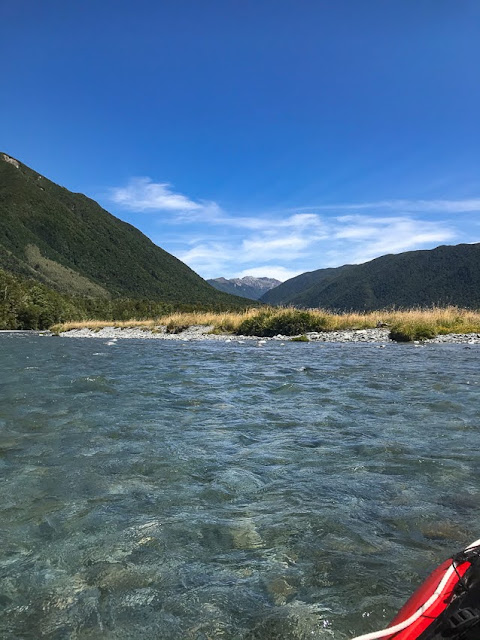 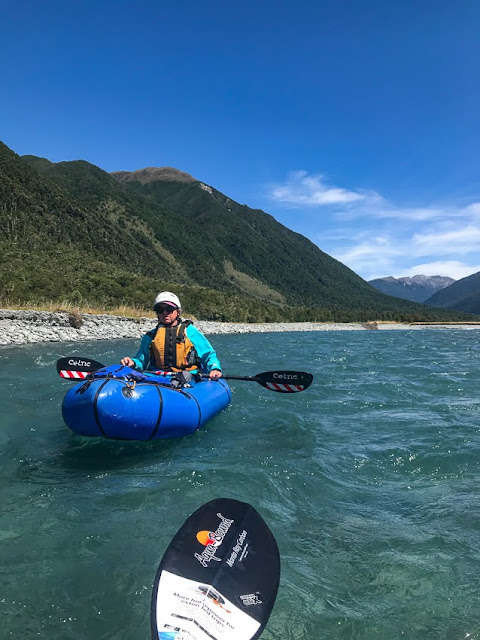 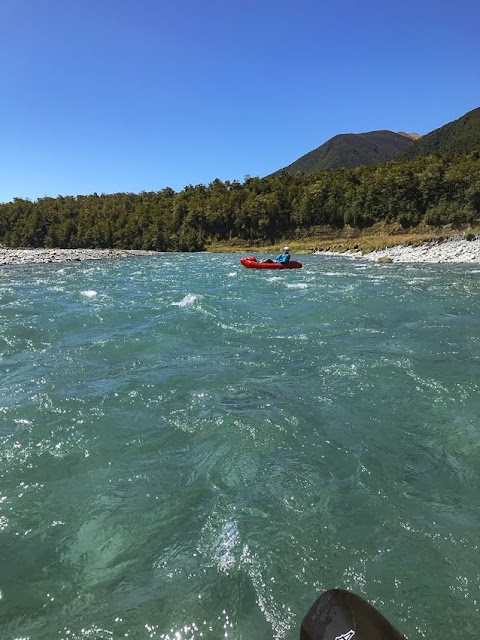 Once I got back to civilisation I looked up ferry gliding again, because I think Kelvin was expecting me to have a skill level I am yet to achieve. Effortless ferry gliding with minimal paddle strokes is something I can't yet do, but I do know that I need to keep my boat at the appropriate angle to allow the current to push me across the river. At this point I'm still struggling with that so there's lots of paddling on my part involved. I still get across the river, just with more effort. Yes I need to learn to do it effortlessly, but it sure wasn't going to happen with one practice run!

We pulled up at a spot where the river met the track, packed up our boats and tramped the final 30 minutes back to the car. Yet another night in Murchison and another hearty meal at the pub. I'm almost a local!

I met some lovely people at the meetup, and made some new contacts. But I feel even more of a liability as a team member than I did before I attended although thank goodness there are still people I met who will happily come paddling with me. My confidence is pretty well shot, but that's not such a bad thing as it's not going to make me think I can tackle rapids by myself.

There's only one way to remedy this, and that's skills practice. I'm going to start on flatwater, nailing my self rescue and working on paddle strokes and edging, then work on my eddying and ferry gliding skills on easy rapids. Then I should be ready to paddle with others.

I'm off to the Marlborough Sounds for a few days next, a perfect spot for piddling around in a boat.....