We had a rest day in Whanganui, which was not without a bit of drama. I'd experienced some visual disturbances in my good eye whilst paddling down the river, which had completely freaked me out! I went to a local optometrist for a check up and eye scan and the good news is my retina and macula are fine, just early signs of cataract. That's fixable. So time to move on...
We got up at 5am to catch the outgoing tide for the 12km paddle from the Top 10, where we had stayed in a nice cabin for two nights, to the Whanganui River mouth. It was misty and atmospheric, as we passed rowers and downriver kayakers doing early morning training. We passed a big yellow duck (an annual fundraiser) and the old paddle steamer that used to service the settlements up the Whanganui back in the early days. 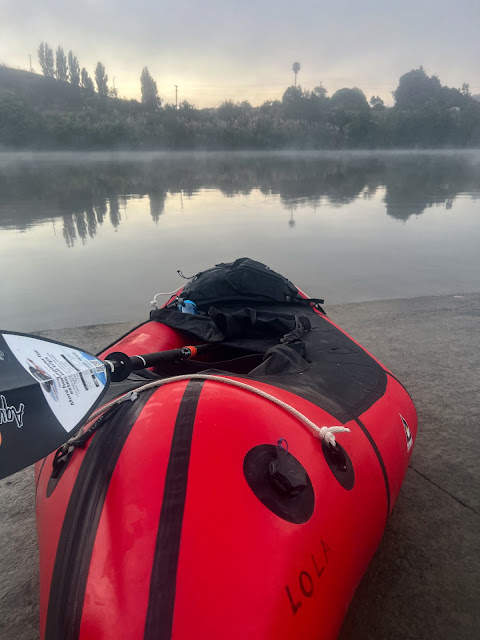 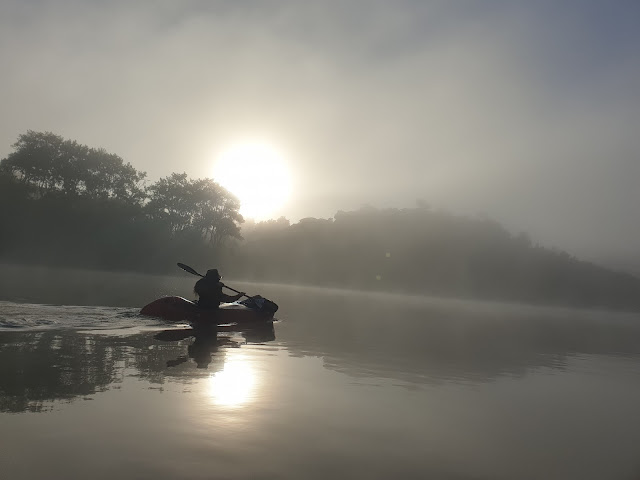 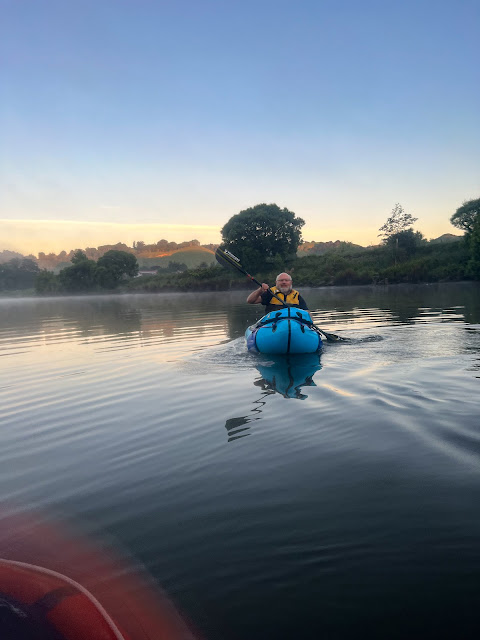 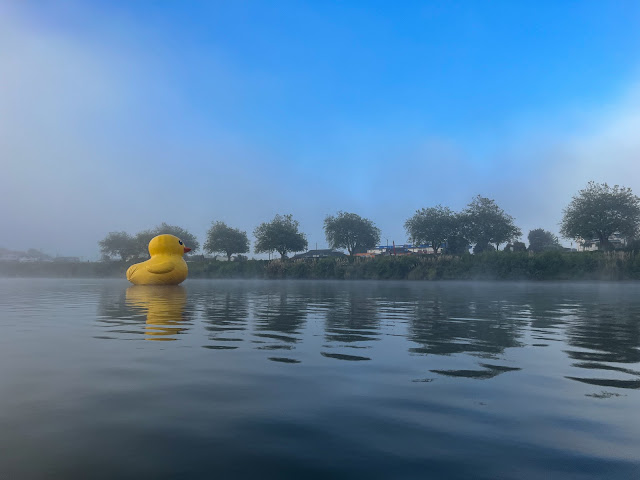 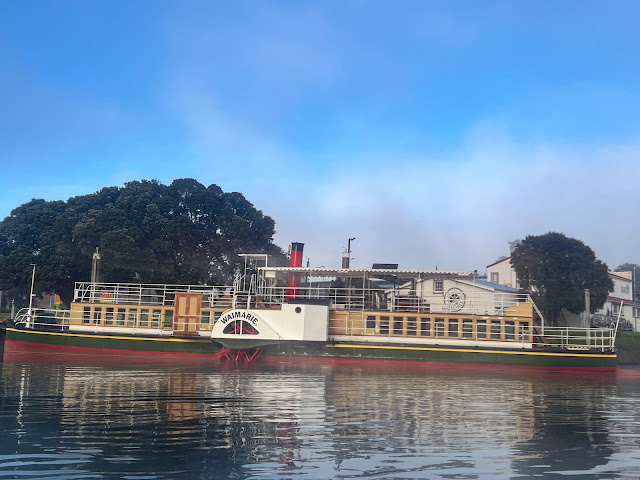 It took us 2 hours to get to a spot where we could cross to south beach and begin the tramp south. The sand was quite hard, which made for easy walking, but our packs were heavy. Packrafting gear is light, compared to a kayak, but it's still an extra 5-6 kg on your back. 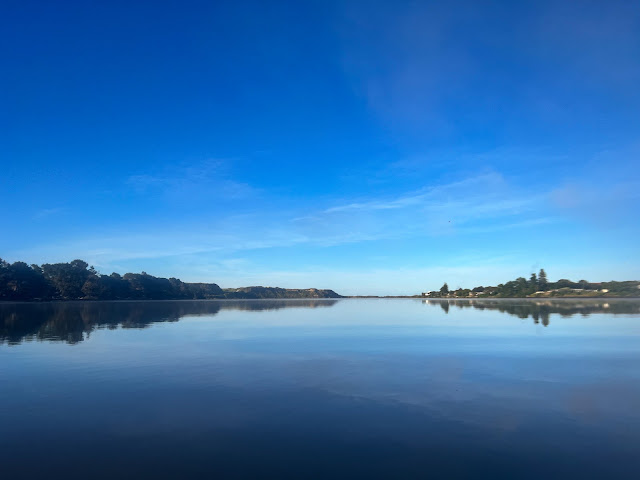 It's my first tramp for the spring and it wasn't long before I was feeling it in my hips and butt. We stopped for a few breaks, there being lots of driftwood logs to perch on. I had decided not to bring my tramping poles, something I was now regretting. 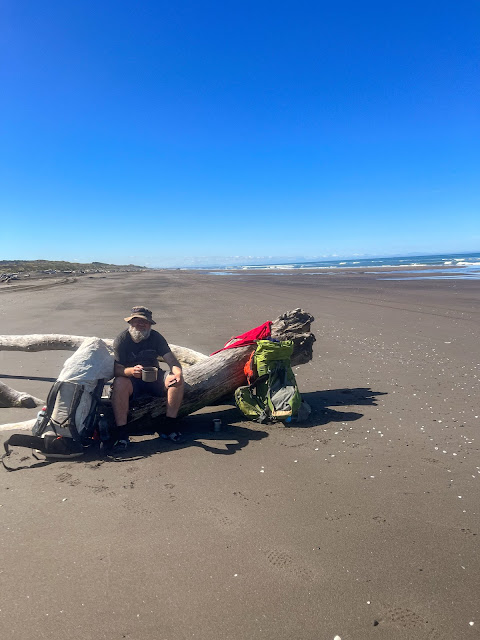 At our first river crossing we stopped for lunch, before blowing up the boats and paddling across the Whangaehu estuary to the other side. The tide was too low to get up the lagoon very far so we had to pack up the boats and continue walking. I think my pack was even heavier with all the extra sand and water that got rolled up in the raft! 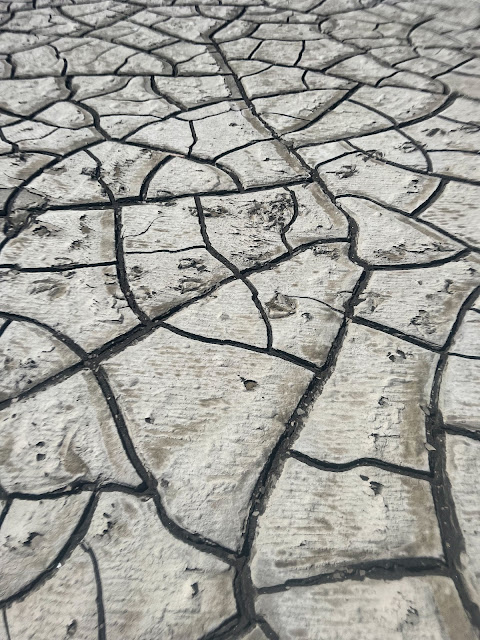 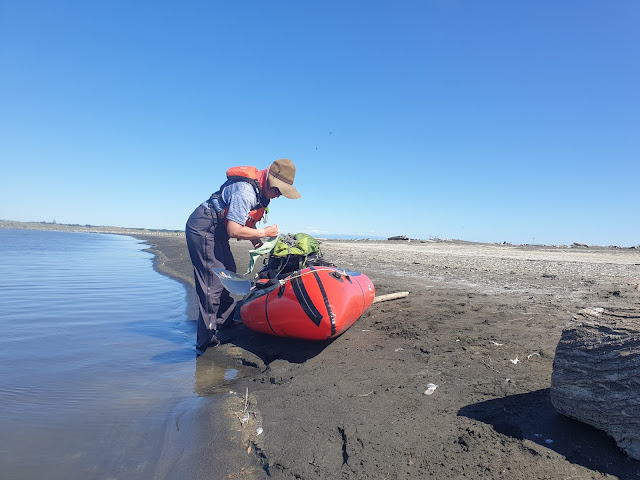 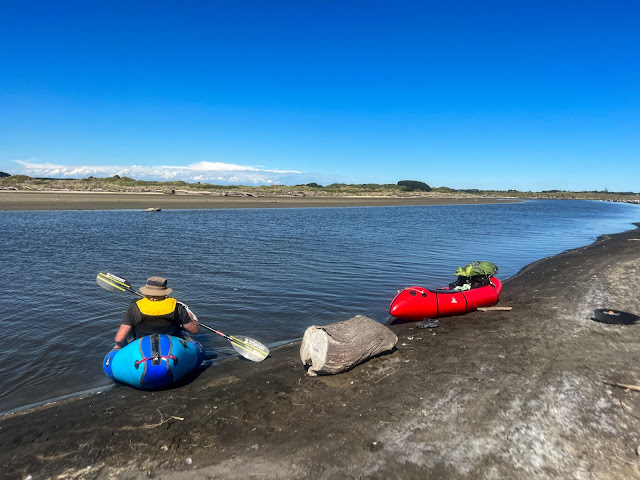 The walk to the Turikino was only another 3 or 4 kms, but it seemed interminable, as the tide had come in and we had to walk on softer sand. But we got to paddle the last km or so, as the river followed parallel with the beach and brought us pretty close to Koitata, where we were camping the night. 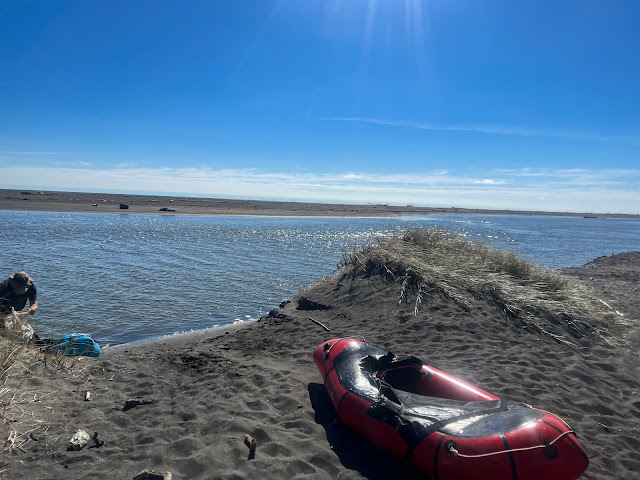 The motor camp is superb, a grassy tree lined reserve with ample picnic tables for the unpowered sites and a different area for powered. There's a kitchen with hot water and coin operated hot showers. Neither of us was carrying heavy coins so we made do without. The sunset was pretty special. 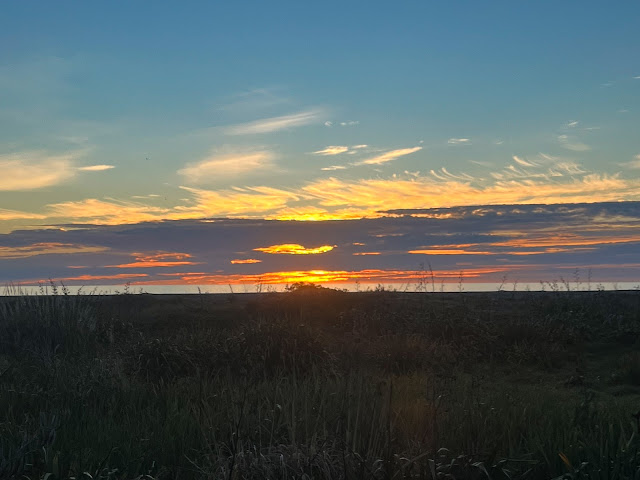 I was feeling quite sore and seriously doubting my ability to get over the Tararuas.....
Day two of beach walking started off with a wet muddy wallow along a track out of Koitata towards the beach. Very pretty with lots of flowers in bloom. 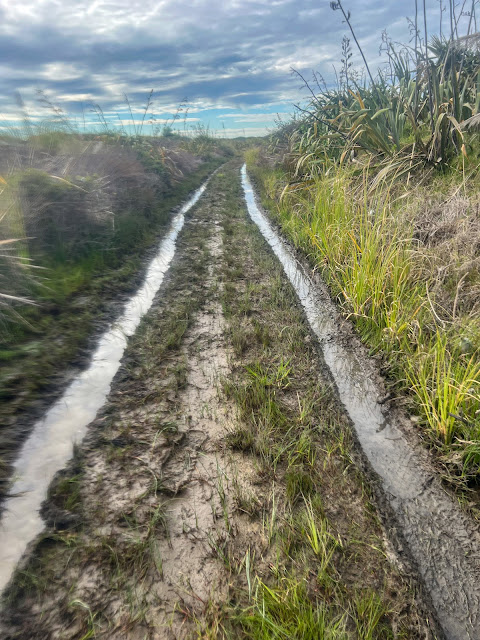 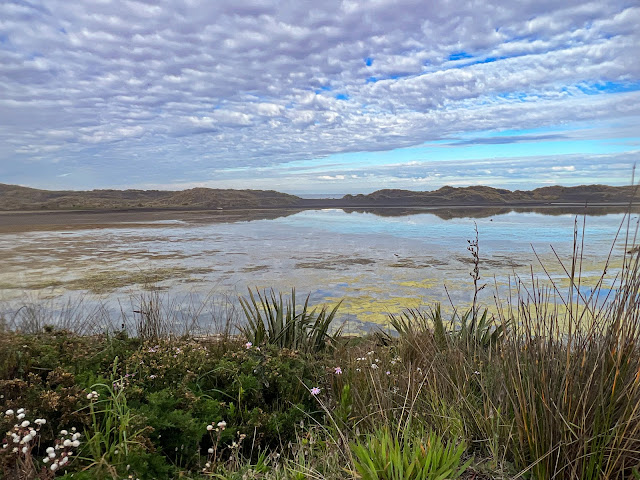 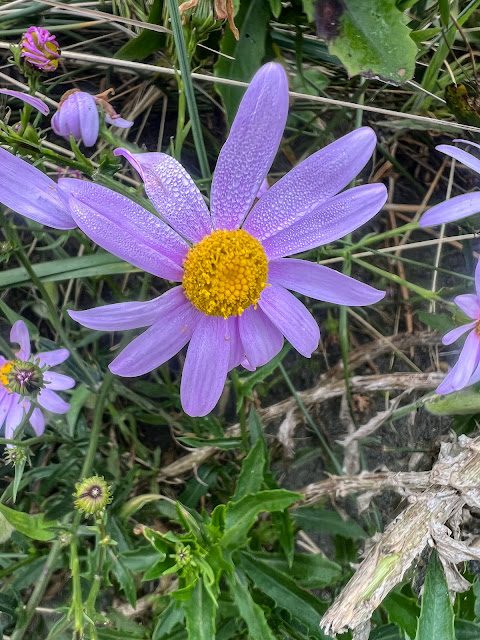 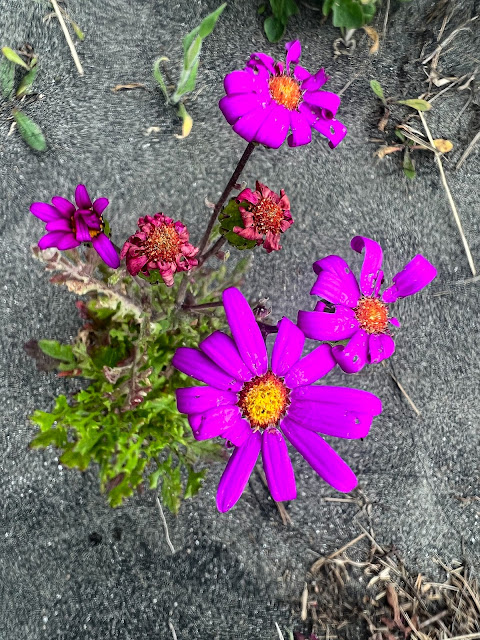 Once on the beach the real walking began, and it wasn't long before I realised I was developing blisters under my toes. I'd already got one blister on the inside of my right sole, but now, with wet feet and a heavy pack, my poor little feet were protesting. After three months in ski boots they just weren't ready for that sort of punishment.
The day dragged on. Mostly we found hard sand to walk on, we took numerous stops, lounging on the myriad logs washed up along the beach. The sun was shining and there was a gentle breeze to keep us cool, which helped, as it was dark volcanic sand. 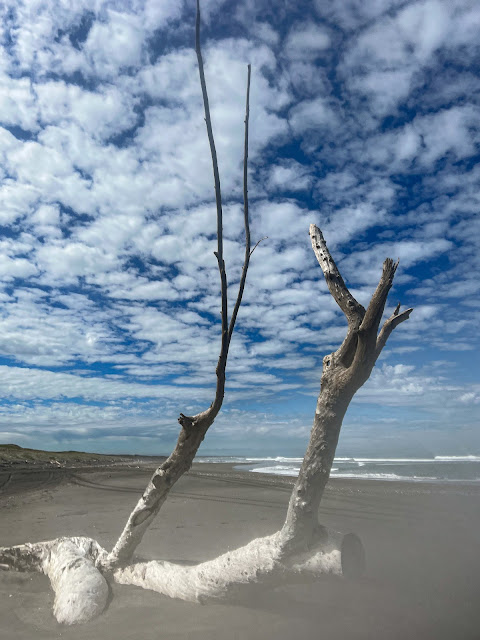 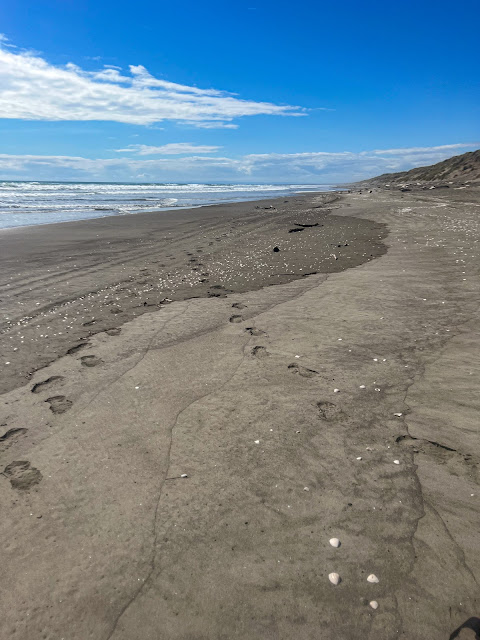 We passed numerous people long line fishing and I was sorely tempted to ask for a lift. But I didn't, plodding on with a heavy uncomfortable pack digging in to my hip bones. 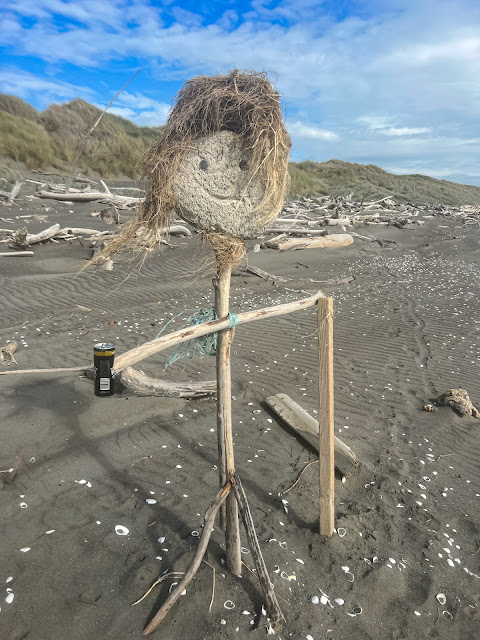 There are always parts of a tramp that are a bit dreary, and trudging down a beach for 25 km fits squarely in that category. After lunch I exhausted my song catalogue (which is fairly limited anyway) and I began to regret not bringing my earphones to listen to some podcasts. 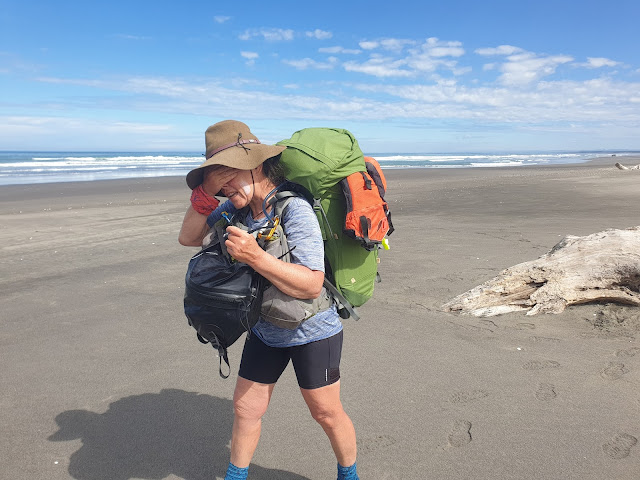 The trudge continued. In the last couple of kms I did get offered a lift, but by then I figured I might as well suffer out the day, so declined.
As we walked up off the beach to the road into Scott's Ferry, I got offered a toke on a joint by a couple walking to the beach. I also declined that!!
The walk through to the campsite was entertaining, as all the beach houses along the road have Inn themed names. Hev Inn, Dew Drop Inn, Back Inn, Brew Inn, Just Moved Inn, and my favourite Mansh Inn, probably the most delapidated bach of the lot!
The motor park was quite small but chokka with big rigs, retirees there for the fishing. Everyone was super friendly and we found a wee grassy spot to pitch our tents. But first a good lie down and a stretch. Off came the shoes and socks to reveal even more blisters on the remaining toes. Thank goodness I had bought more blister pads in Rotorua!!
We had our dinners and hit the sack. The forecast for the next day was good, but my feet and hips couldn't handle another punishing 17km along the beach to Foxton, which would also involve paddling across the Rangitikei and a couple more rivers, packing up a wet sandy raft in between. I knew it wouldn't be fun, just an exercise in endurance, based on a wish (Stu's) to get to Cape Palliser human powered. It wasn't my adventure, so I made the decision to call it quits and let Stu continue solo.
He took my defection well. He'd seen my toes, and my duck walk, and knew I was suffering. I lent him my inflation bag, because he'd forgotten his yet again (he'd forgotten it on the Hollyford Pyke trip too) and I helped carry his inflated raft up the bank to the river.
Then I waved him off as he paddled down the Rangitikei and I went back to the campsite, packed up, got a lift in to town and caught a bus back to Taumarunui.
Reunited with my car I drove to Rotorua to retrieve my possessions from Stu's place, and pick up his inflation sack. Then I needed time to heal.
Why not be a car based tourist for a while? That's next….