Tuesdays on the river 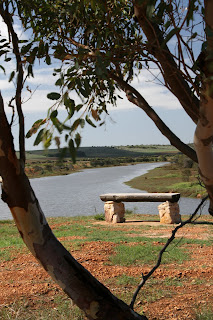 It began on a Tuesday, the 17km walk around the Greenough River which is now a much loved part of my week. Sally and Sheridan accompanied me from the start, but have now gone off to explore the Flinders Ranges in SA. Then Kate and Curls turned up after their trip around Australia, having decided to move to Geraldton like the rest of us crazy windsurfers. So Kate joined me last week and brought along Molly, one of her dogs, Mutley being out of sorts with a torn claw. This week, however, Hazel and I had the place to ourselves. 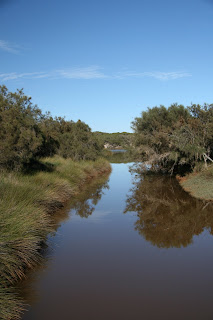 Sometimes the going has been rough, particularly early on when I was coping with both being unfit and those blisters, but now it's a pleasant walk that takes between 3-4 hours depending on how often I stop for photos. There is lots of birdlife on the river, from the largest pelicans I've seen to ducks, cormorants, ospreys and sea eagles. And lots of jumping fish. 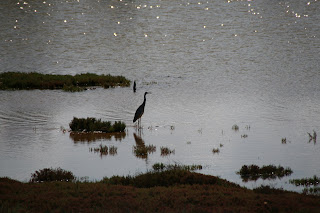 There's been a bit of rain, so sometimes the track has been very heavy with mud and the river ford has been flowing strongly and the river mouth has been breached. Once we swam across the rivermouth, other times we've decided just to walk for 2 hours then return the same way.
The rain has encouraged the plants to begin flowering, such that every week there is something new to see. 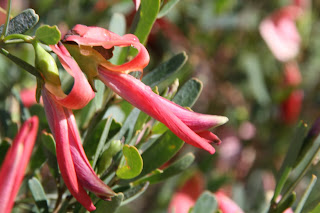 There's sometimes a cyclist, some fishermen or a local resident to be met along the track, and there's evidence of campers, campfires and excessive drinking and dumped cars. But that must happen on the weekends because it's just me and nature on Tuesdays. 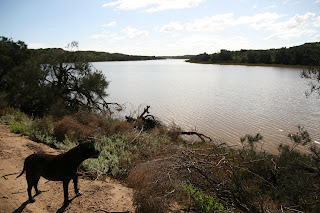 It's a little treasure down there, and every Tuesday it's mine.
More photos