Welcome to my garden.

As mentioned in my little bio on the side, I like gardening. In particular I like the concepts around permaculture and organic gardening with a little smattering of kinda weird stuff like nurturing positive attitudes towards all visitors, including those that other people call weeds and pests. Kind of a live and let live idea, where I view the "weeds" as potential compost and chook food and allow the "pests" to chomp on some plants, as long as they leave others for me. And no chemicals mean lots of other visitors which predate on others. It's amazing what you can find in a garden when you start looking. Lots of birds, a selection of lizards, probably some snakes, and thousands of ladybugs and spiders.

Last week I had the annual pest inspection done, a necessity here as we have a huge termite problem in WA. They can get into your house and destroy the structural wood in months! But my property is consistently termite free and the inspector can't quite believe it because basically most of my property is overgrown bush, and there's wood and timber everywhere, perfect food for swarming termites to find new homes amongst. Not on my piece of real estate though and it's because of some of my gardening practices. Firstly, I harvest the dead acacia for firewood, which means that there isn't actually alot of fodder for the little beasties afterall, but most importantly, I use seaweed as mulch. Almost the entire of my perimeter plantings of natives have been mulched with seaweed and seagrass which I collect from the beach. And apparently the wee termites hate the stuff. Makes all that back breaking work worth it hey? 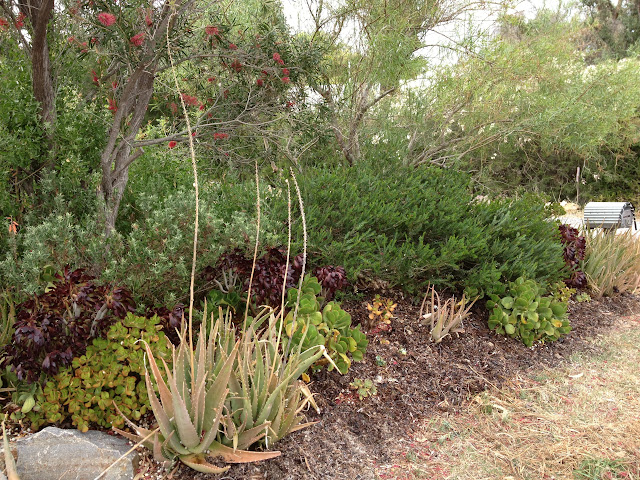 The street frontage has evolved over the decade I have been here. A mounding of soil houses numerous natives in an attempt to create a visual and sound barrier from the road, though the traffic is never more than occasional. It also acts as windbreak for the microclimate I hope to create for the vege patch. The natives have been underplanted with succulents because they are the only small plants that can cope with the searing heat and strong salt laden winds we get. Flowering exotics require too much watering and nurturing. The entrance through the mound has also changed over time. I'm happy with the current entrance, through an informal archway.

I'm not fond of grass so I have none. Too much maintenance required IMHO. Instead I have some paths made from reclaimed bricks and other paths that are just seaweed. The driveway is blue metal gravel. So there's no mowing and no watering required. The nature strip is the only area that has something resembling lawn - it's really just a conglomeration of "weeds" - and is kept in line by my wonderful neighbour Alan who throws his lawnmower down the strip when he's mowing his place. It gets no TLC from me! 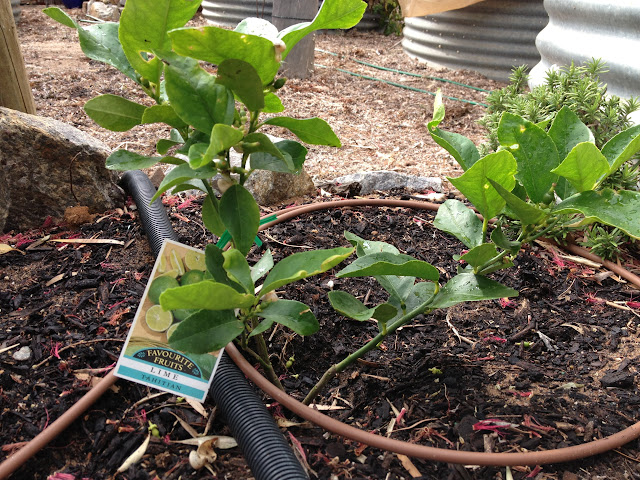 Inside my perimeter planting is another set of trees. These are mostly fruit trees: citrus, fig, mango, which I hope to grow into small trees to produce enough yummy fruit for my needs but also provide some much needed shade for the vegetables. I also have some frangipani, which I love for their fragrant flowers and all round gorgeousness! The fruit trees require quite alot of nurturing for the few years it takes till their roots hit the water table and then I'll be able to leave them be.

The inner sanctum is the vege patch, a series of tubs made from cut down rainwater tanks then filled with soil, compost and manure. In these I can pretty well grow anything, as long as I can keep the water up to them, and stop the searing heat from cooking them. This requires a little ingenuity and has caused me no end of headaches over the years, but each summer I try something different as I learn from the wins and losses of the previous year. This year I have erected the shade sails already, and with an extra rainwater tank on site I am watering more frequently. I have also just built a new shadehouse structure which over time will be covered in grapevines and will become a nice spot for relaxation and contemplation. That's the front yard. Let's now move through the gate and into the north garden, which is shaded by a pergola covered in bougainvillea. I've decided to dispose of the bougainvillea, it's just too much maintenance to keep given I plan to let out the house and go travelling. Instead I'll cover the pergola with shadecloth and possibly passionfruit vines, but for now my Mondays are spent chopping down enough of the thorny bush to fill the garbage bin. The shaded garden is full of exotics in my attempt to create a semi tropical feel. It also houses a few sculptures made by myself and friends. I'm particularly attached to my spiderweb! 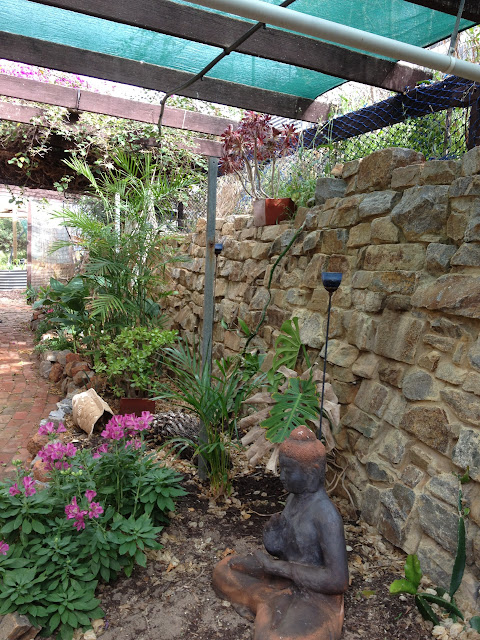 On the southern side are more natives. The spinifex remind me I am in a beachside suburb, and I hope that the eucalypts will grow tall enough to both provide a visual screen and windbreak from the southerlies. I am a little mindful about fire risk however, as these trees are very close to my house, but I intend to manage them by harvesting branches for firewood. Sort of two bob each way! 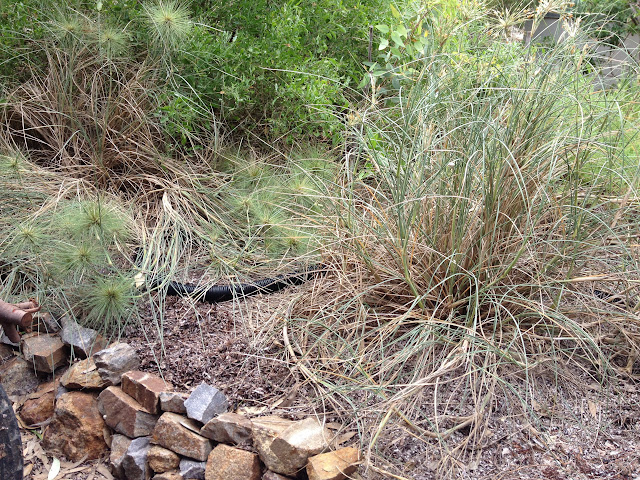 Which leaves us with the backyard. This is the overgrown patch of mostly native bushland on a dune. It's the area that I hope to landscape by building some terraces using old tyres, resurrect the chook run, and plant a few more fruit trees. Oh, and build a pizza oven and a lily pond with waterfall. I mean a girl's gotta have dreams doesn't she?? 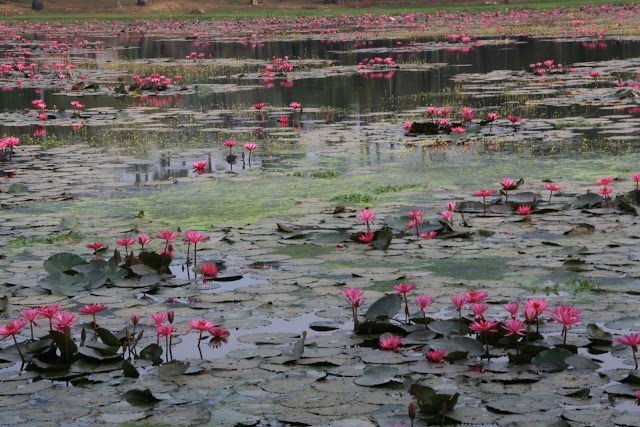