The great joy of all this time off is being able to indulge my creative side. I may be a boring old scientific type in my day job, but I'm also quite an artistic soul as well. I love arranging objects and stuff into pleasing arrangements, and finding new uses for discarded junk. I used to subscribe to quite a few house and garden magazines for inspiration, but for a long time I haven't really found the time to even look at these things online.

Many years ago I was heavily into videography, particularly underwater video, and got pretty good at it. But I never upgraded to HD, and also never finished editing all that footage into something watchable. It's something I intend to revisit, especially those clips that I can now recompress to a larger file size for better quality online viewing. And then there's the small matter of the five hours of African Safari footage......

Before video, I was into photography, back in the day before digital. I still have a film SLR camera and have recently unearthed it, ordered a new battery and some film, and intend to muck around a little with it. Why bother, you ask, when I also have 2 digital SLR cameras and a slew of lenses (most fit the film SLR also!) would I bother with film? And why did I just buy a Holga camera for Xmas??

The answer is inspiration, mainly gained through following a podcast and online masterclasses run by an American chap, Ted Forbes, called Art of Photography. He's not about gear and equipment, but getting you to be inspired, to think about what sort of photos you want to take, and to step back from the shotgun approach that digital photography inevitably leads to. I like his honesty, his knowledge, and the fact that the site is not just a front for sponsored advertisements. Check it out.

Anyway, I've been going through the archived Masterclasses and have found the exercises really inspiring, so in this post I'm going to show you what I went through in trying to get a shot I wanted. None of the shots I'll show you have had any post production editing, and yes, they are all taken on a digital SLR.

So the exercise was to pick an object, and spend at least an hour trying to find a way to make a really good shot, something unique or unexpected. Think about mood, lighting, setting, motion, what to add, what to take away, and both write down ideas in a journal as well as actually take shots with the camera.

I chose my Canon EOS 50D SLR with my 60mm EFS macro lens, to take a picture of a toy car. I mounted the camera on a tripod, and I used lighting from a LED desk lamp. The photos were taken at night.

The toy car is a Trabant 601, which was a classic car in East Germany back in the 1980s. It ran with a two stroke engine, sounded like a souped up lawnmower, and spewed dirty pollution everywhere. It was an archetypical symbol of Cold War communist Europe. I'd picked up my toy car in Berlin when I visited in summer 1990, and had strong, if not totally fond, memories of these little cars chugging up behind me as I cycled through the recently liberated East German countryside. My toy came mounted in a box commemorating the fall of the Berlin Wall in Nov 1989, but I threw away the box years ago.

The idea was to photograph the car juxtaposed with a symbol of the commercial capitalist society of today, and what else could symbolise this better than the Apple logo? Great concept, just got to realise it. 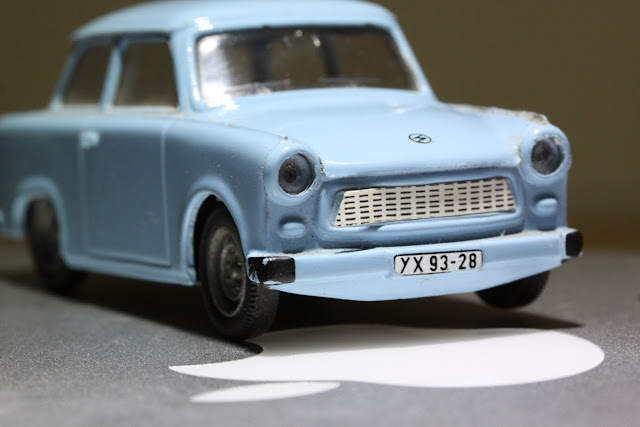 I started by taking photos of the Trabi sitting on the surface of my Apple MacBook Air. I tried lots of different angles, lighting directions, and aperture settings and although I was happy with some of the shots of the car, I couldn't get the Apple logo to stand out the way I wanted. And without that, well it just looked like a picture of a car right?

It took me a while to realise that one big problem was that the silver top of the MacBook was reflecting far too much light back onto the composition and adversely affecting the exposures and hence the contrast. Even with exposure compensation I was blowing too many highlights. What could I use instead? 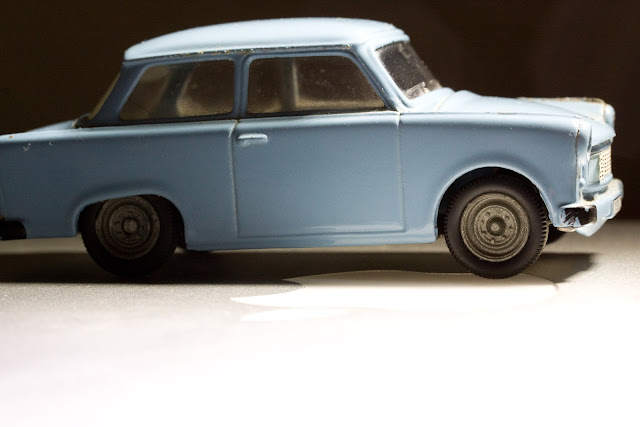 My iPhone of course! With its black shiny back it was the perfect foil, and so I took a few more shots but still felt I wasn't really getting much more than a picture of a car, plus I hadn't quite managed to get the logo into shot. 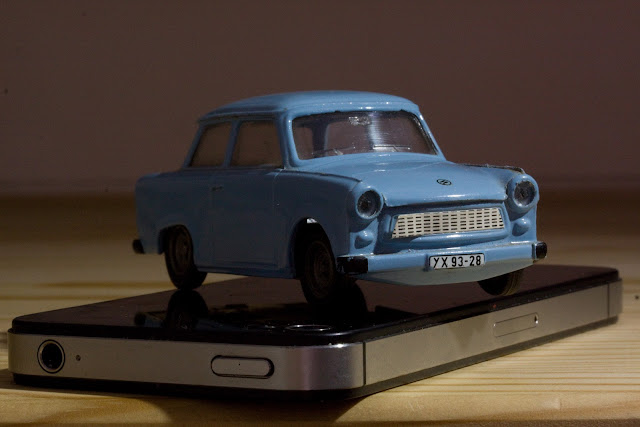 So I decided to turn the iPhone on its side and use it as a backdrop. Then I noticed the reflection of the car in the black screen, so I took a few shots of car plus reflection, and then the Eureka moment happened. 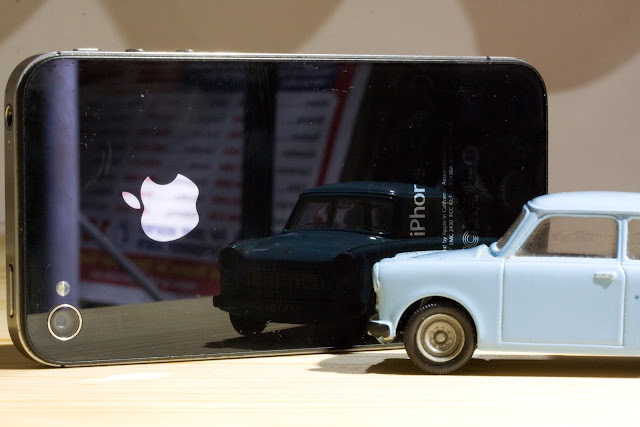 I didn't need to photograph the car at all. 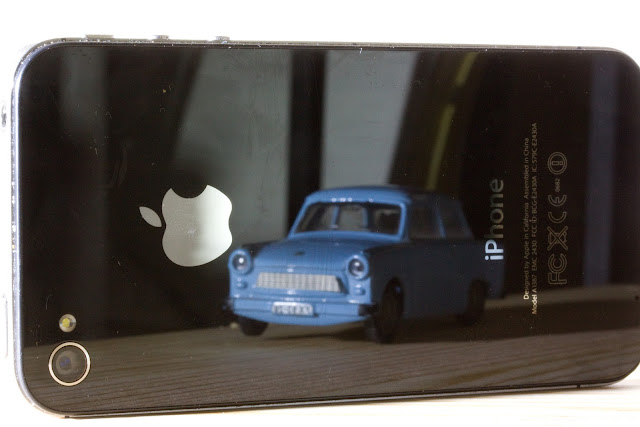 So here it is. Shot at f22 for a 30 second exposure. The only lighting is from a LED desk lamp coming from about 11 o'clock, i.e. upper left side. The phone is angled back diagonally, in order not to get the reflection of the camera in shot, but also to achieve the desired focal depth of field. You'll also notice, if you compare it with the photo just above, I masked the reflection of writing (a telephone book) by popping a piece of white paper in front of the book.

What I love about this photo is it actually looks like a modern cover for an iPhone, but it's not! I love that the car isn't quite in focus although the Apple logo and writing are perfectly clear and the car fits well between them. I like how the right hand side of the phone is out of shot and the shadow of the car also extends off shot, as if the car really might be just driving through. I also love the lighting, very moody and film noir, it creates for me the imagery of cold war Europe, clandestine spies and all that! The background has worked out really well, with the shadowy lines looking like they just might be buildings or something - in fact it's the bars from the top of the staircase where my desk resides in a little nook.

I've really enjoyed this little exercise and I have Ted and his podcast to thank for it. It's inspired me to take my time thinking about taking good shots, by spending the time composing and experimenting rather than just shooting and seeing. And I've dusted off the film camera as well!

I hope this inspires others to have a go doing this exercise, it's alot of fun. And I'd love people to leave comments about what they think about this photo.