February was a mess. Only 4 days when the mercury didn't hit 30 degrees, but that's hardly saying much when it got to 28 and 29 instead. The average was over 35 degrees and the coldest night was 13! That must have been the night I had to find the doona.

Because of my tender ministrations, the garden survived, but not without considerable carnage. The last of the eggplants got caterpillar infested and mouldy, but there's more flowers coming on so I expect more fruit in a couple of months.

All the lettuce died. Well, 99% did, there's a couple of hardy stragglers left. All the cucumber plants also expired, including the new seedlings. February sure is cruel..
Quite a few tomato plants curled up and went to the great garden in the sky, assuming that the sky garden hasn't been affected by climate change or else there's gonna be nowhere to go. But a few made it through.
Bizarrely, I've had a second rush of asparagus, and the stalks are thicker too. Perhaps the result of the feeding and TLC that I've lavished on them in the last 6-12 months, but the heat didn't hurt them at all. Nice to have a happy story amongst the general despair.

The citrus trees, having survived curling leaf miner through my regular leaf pulling, have put on big growth spurts this month, but they have dropped their fruit buds. My one lonely lime is still growing though, am so looking forward to that Mojito!

The rhubarb and fennel seedlings have had mixed success. I always thought rhubarb was a pretty easy plant to grow when I lived over east. It was always the perennial down the back that seemed to thrive on neglect. But over here, you can't take anything for granted, and regular feeding and watering is the only way to get them through big heat waves. The fennel, on the other hand, has thrived, but I'm thinking that they aren't exactly producing big juicy bulbs. Perhaps this will happen as the weather cools down, whenever that will be...

The okra plants that I raised from seed are currently at 30% survival, with the most successful ones being well shaded by other nearby plants. My companion planting strategy is to dump in a whole lot of different plants in the same bed, and to spread them around amongst all the beds. This spreads the soil and pest issues around - they may do better in one spot than another. And hey, I'm just a bit erratic when it comes to gardening OK?
The mango tree is happy, and has a resident greenie that I have been trying to take macro shots of. He's a little shy though - or she, I'm pretty sure praying mantis are hermaphodites.
The pumpkin plants have also been victims of the heat. All those lovely little new fruiting buds just shrivelled up and died. Even the chaps at the Farmers Market were commiserating with me last weekend - they struggle too to keep up the water.
A wonderful thing happened though, which was that my dragonfruit plant that is planted in the front patch put out its first (and only) flower. It only lasts a night and half a morning, but it's a wonder to behold. I totally get why it's named after a dragon now.
So it's not all doom and gloom. A new fig tree I planted a month ago is going great guns and is even fruiting. The watermelon, which are all shaded, are coping and fruiting, though whether I can give them enough water is a moot point. I've exhausted the water in one tank and am starting on the water in the top tank. And praying for rain. Which may still be 2 months away. If I have to use scheme water I will, but I'll darn well grumble about it..
The side tropical garden looks happy, and the papaya plants are thriving in the current conditions. The bougainvillea stump has been shooting out a few green shoots, and I've been throwing my organic sensibilities out the window and throwing poison on it. Take that you monster, I am determined to win this one not you and your wicked thorns. Look at me, talking to a plant! This heat sure makes a girl go a bit bananas. 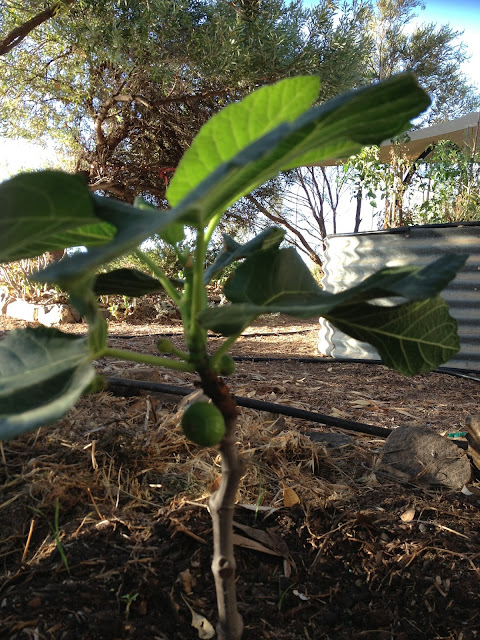