The last 12 months seems to have been a turning point in my garden, where I am more often successful at growing things than not. So that's been 15 years of trial and error to get to this stage.

Personally, I think the secret to a successful garden really is time. I mean look at those gardens they feature on gardening shows, almost always at least 10 years of work has gone into them. You need time to learn about the climate zone you live in, the seasonal variations and the soil type, and to modify your little personal ecosystem to suit what you grow. Perhaps more organised people than me get there a bit sooner, by documenting the process for future reference, but for me it's so haphazard it seems more by chance than design.

I decided early on that I wouldn't use chemicals, except where absolutely necessary, and chanced upon a great book called The Natural Gardener by Jeffrey Hodges, which talks about treating your garden with respect for all creatures great and small, allowing the garden to develop its own balance. This means not naming and blaming, but seeing those little visitors who eat your greens as being just as welcome as the next one. It's not about making a pesticide from natural ingredients, because that is an attitude that continues to promote imbalance. Instead, you allow nature to restore the balance, where you allow some things to get eaten as long as there's enough left for you. There's also the option to see those little green caterpillars or snails as kamikaze soldiers who sacrifice themselves to the chooks for extra protein, as well as to the myriad wild birds and lizards who help themselves. Excessive greenery aren't weeds, but chook food and compost fodder. 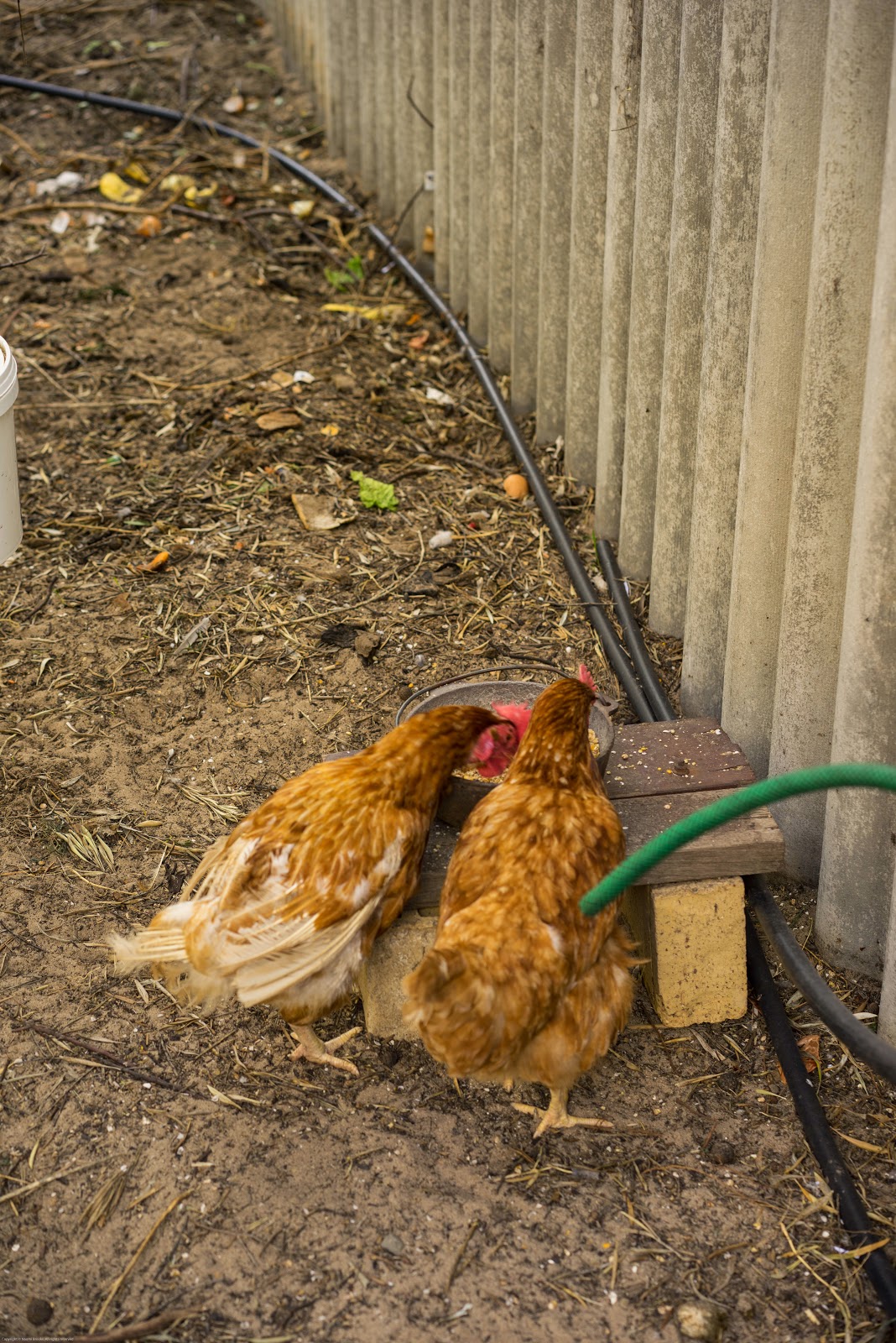 At first, the greedy visitors were winning, but over the years, as I built up the soil, learnt when to plant and how to keep those plants alive (daily hand watering and summer shade are my 2 main strategies), the plants developed resistance to being taken advantage of, and the birds and predatory insects come regularly, knowing the prey isn't poisonous. Sure things get eaten, but total devastation doesn't happen, and there is more than enough food for both me and the visitors.

But I do spray the citrus with white oil. The leaf removal method was only resulting in me losing all my new growth, and as this is where the flowers and fruit develop from, I was going nowhere. So no, I'm not perfect, even though the oil I use is botanical oil, not petroleum based. 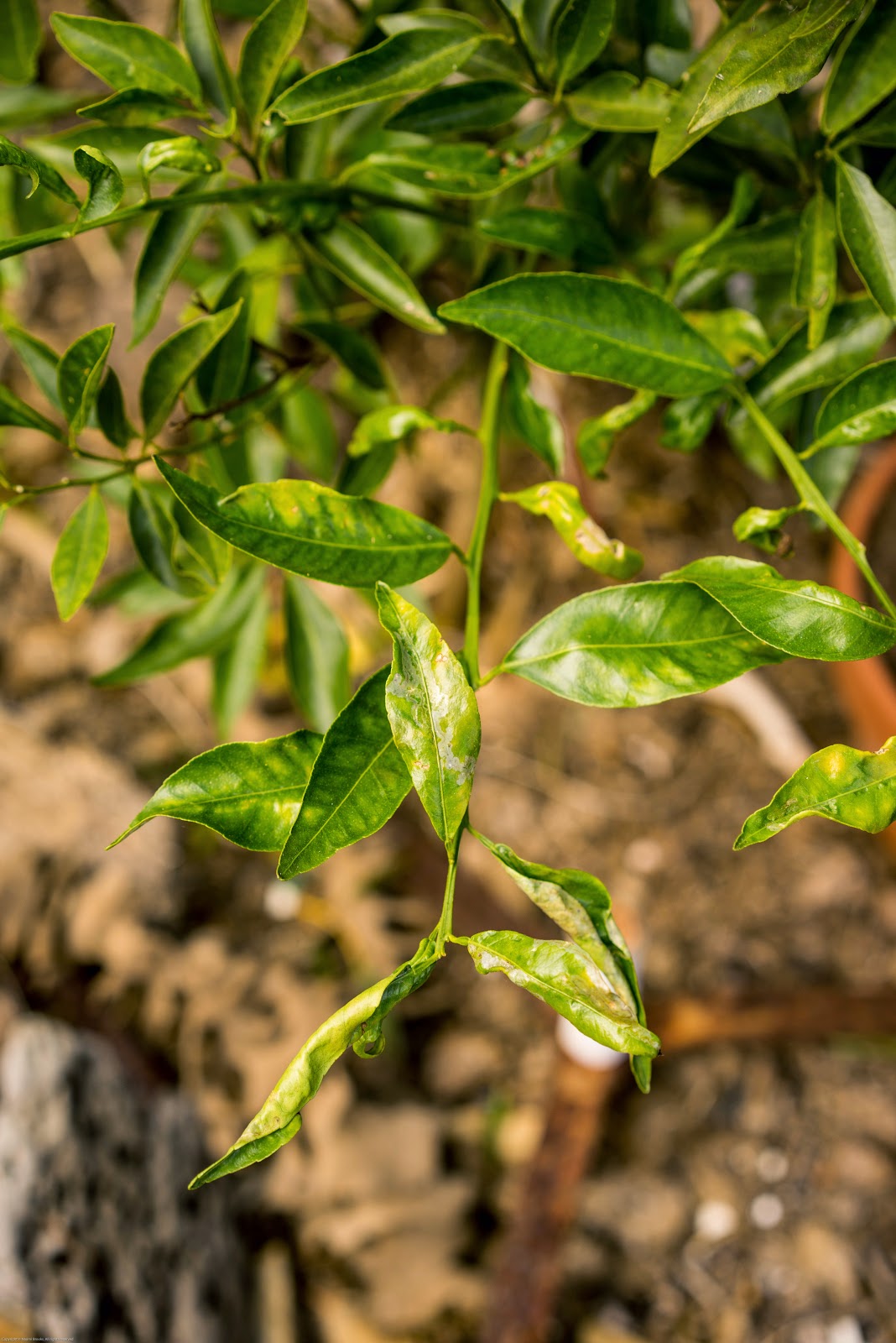 I have even got to the point where I am saving seed from the previous year's crop, which in my opinion is a real coming of age for a gardener, because you are storing and then propagating food that you know grows on your patch. It's also incredibly rewarding to give away seed to friends and to encourage them to grow their own food.

With all the rain we've had in the last couple of months, I've been waging war on the kikuyu growing in my driveway and along the verge. Kikuyu, being a running grass, is pretty tough and very invasive, so I remove it, wait for the next flush of green to reveal missed runners, then round two, three and four ensue. As my driveway is gravel and mowing isn't an option, grass just isn't welcome there. I am afraid that's just one visitor who not only isn't welcome but doesn't serve a purpose either. The chooks aren't even interested in it, but if it takes root in the chook enclosure (unlikely) I won't mind at all.


This weekend the red dragonfruit got a little prune job, and because a few of my friends are somewhat challenged in the gardening department, I have potted the succulents up and will pass them on to my friends once they develop roots (the plants, not the friends!!). If I just give them the cutting they'll not know what to do, or will forget to plant it, etc, whereas a succulent in a pot is almost impossible to kill. I believe my last donated plant is doing very nicely, according to a recent Facebook post! 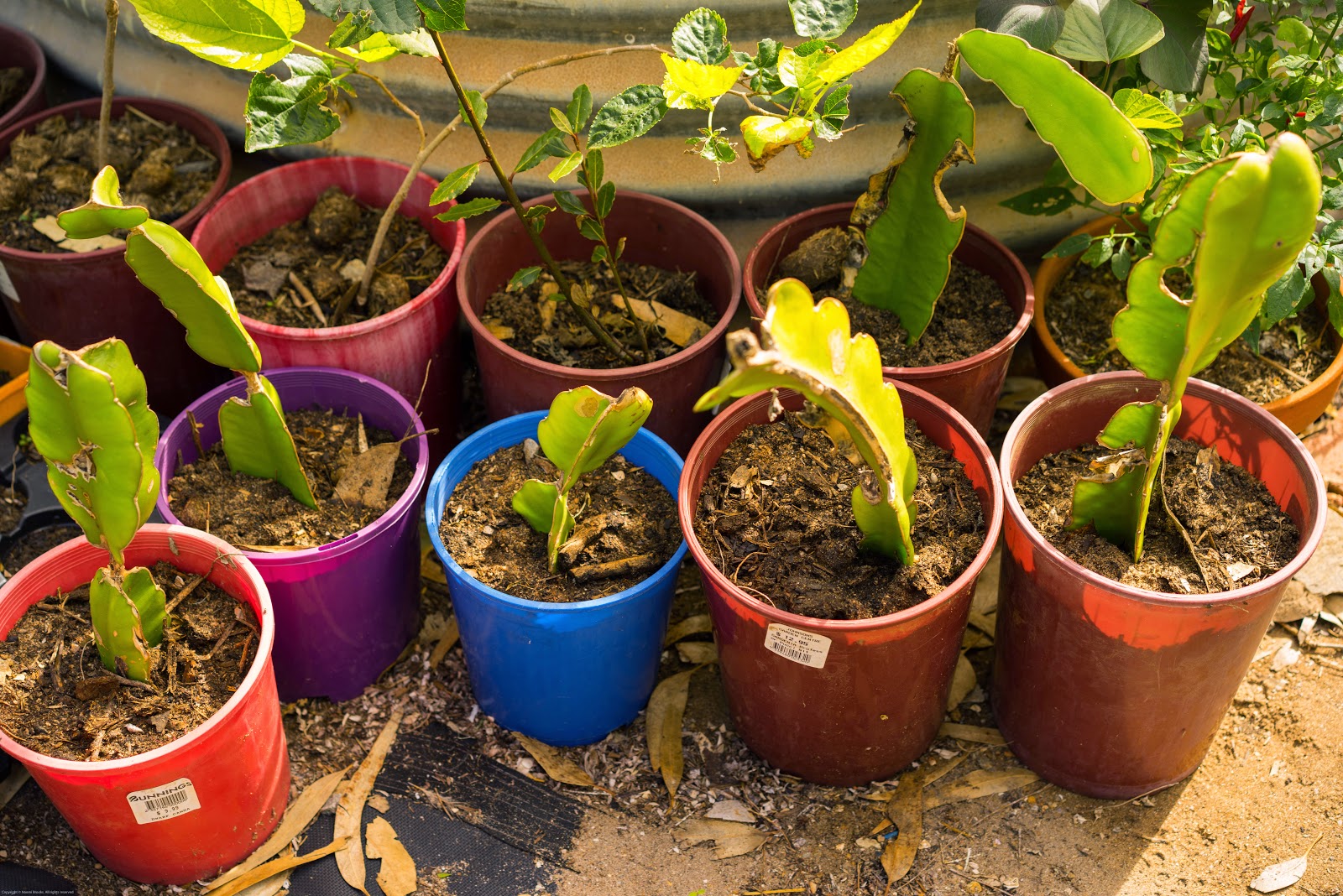 Last month I purchased a kumara seedling from Julie at the permaculture nursery. She's a Kiwi, so I have it on authority that this particular variety, sourced through a local growers network (there are quite a few Maori and Pacific Islanders in town), is the bees knees for roasting in your hangi. I think I'll probably stick to my oven. The seedling, however is taking over. That can only mean one thing, and it's sure to be both bountiful and delicious!! I shall have to ask my house sitters to keep some for me.... 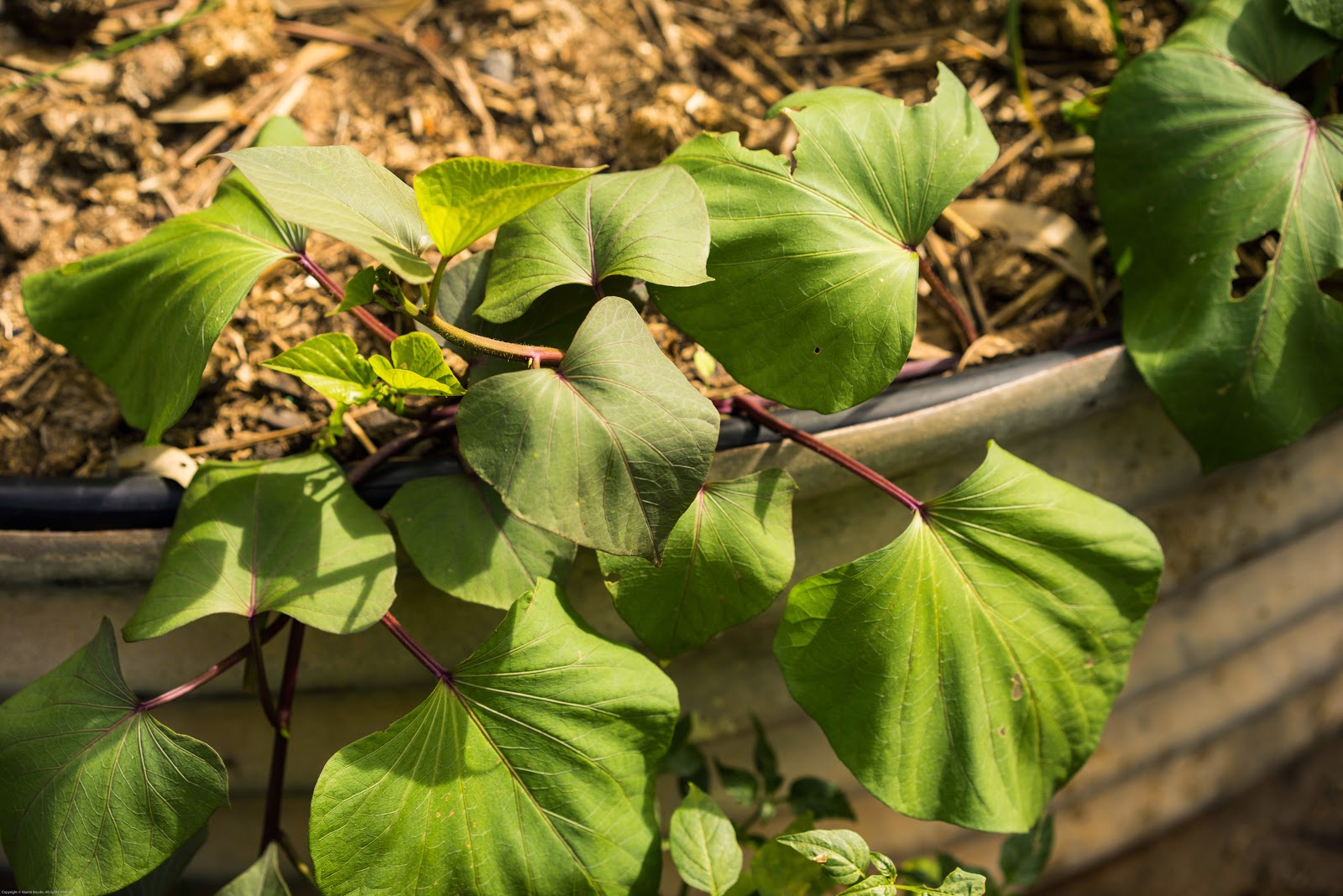 My mango tree is putting out heaps of new growth, which is awesome. Still probably 3-4 years before I can expect some fruit. Ah yes, gardening is all about patience. 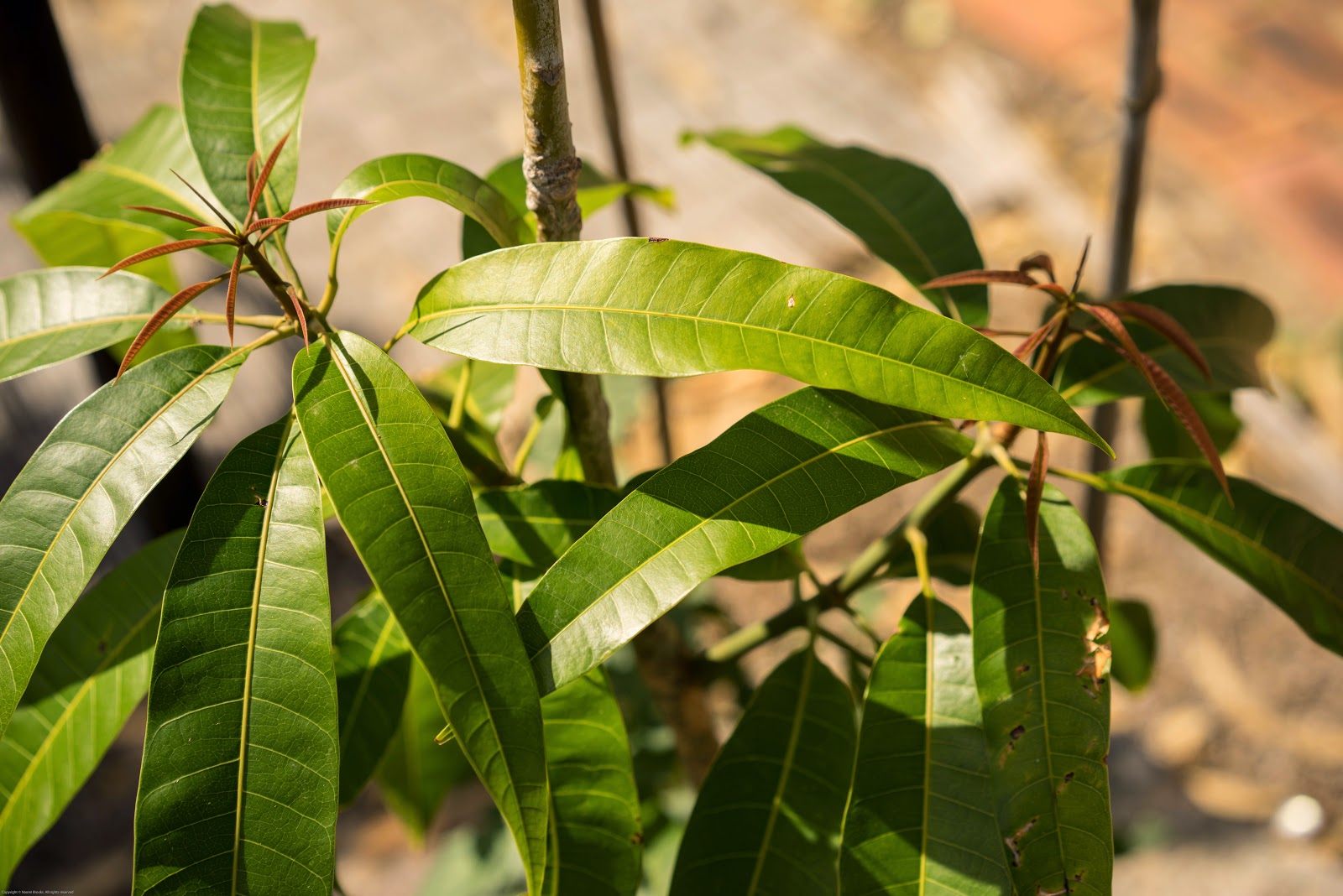 I had a glut of ripe dragonfruit and papaya a week or two ago, but I've managed to polish them all off and am waiting on the next batch of papaya to ripen. The dragonfruit are definitely done for the season, which is why I pruned it, but the papaya continues to flower, and I continue to do a little assisted fertilisation. Those big green fruit can be agonisingly slow to turn orange. You can still eat them green though. I make a pretty mean, very spicy, green papaya salad.


Let me take you along into the "tropical garden" along the northern side of the house. With all the rain the canna have been shooting like mad, and the princess lilies are beginning to green up, no doubt they'll be flowering in a month or so. I've a few more papaya along here, including one of my original plants, which supposedly started life as a bisexual but it looks all female to me!! 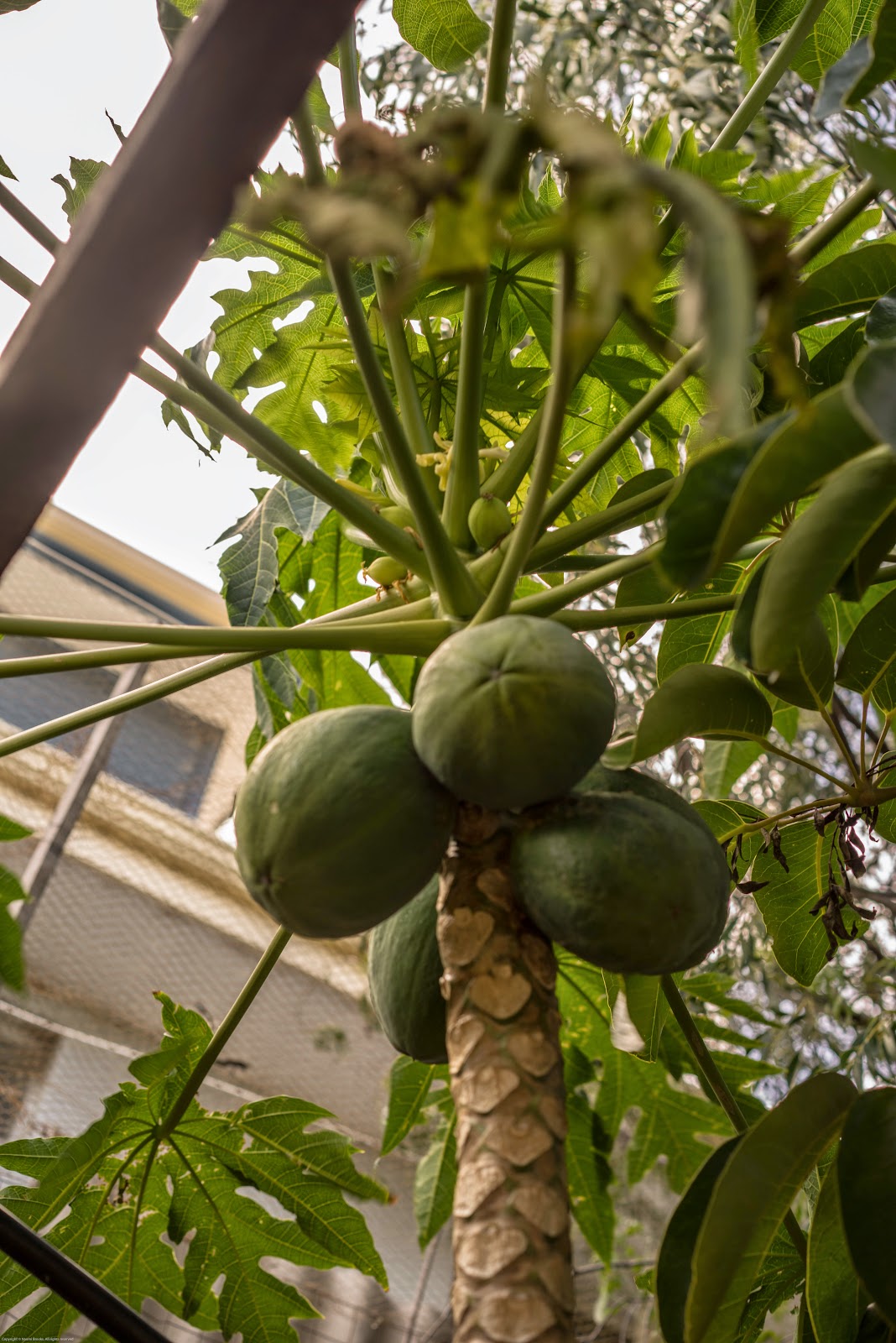 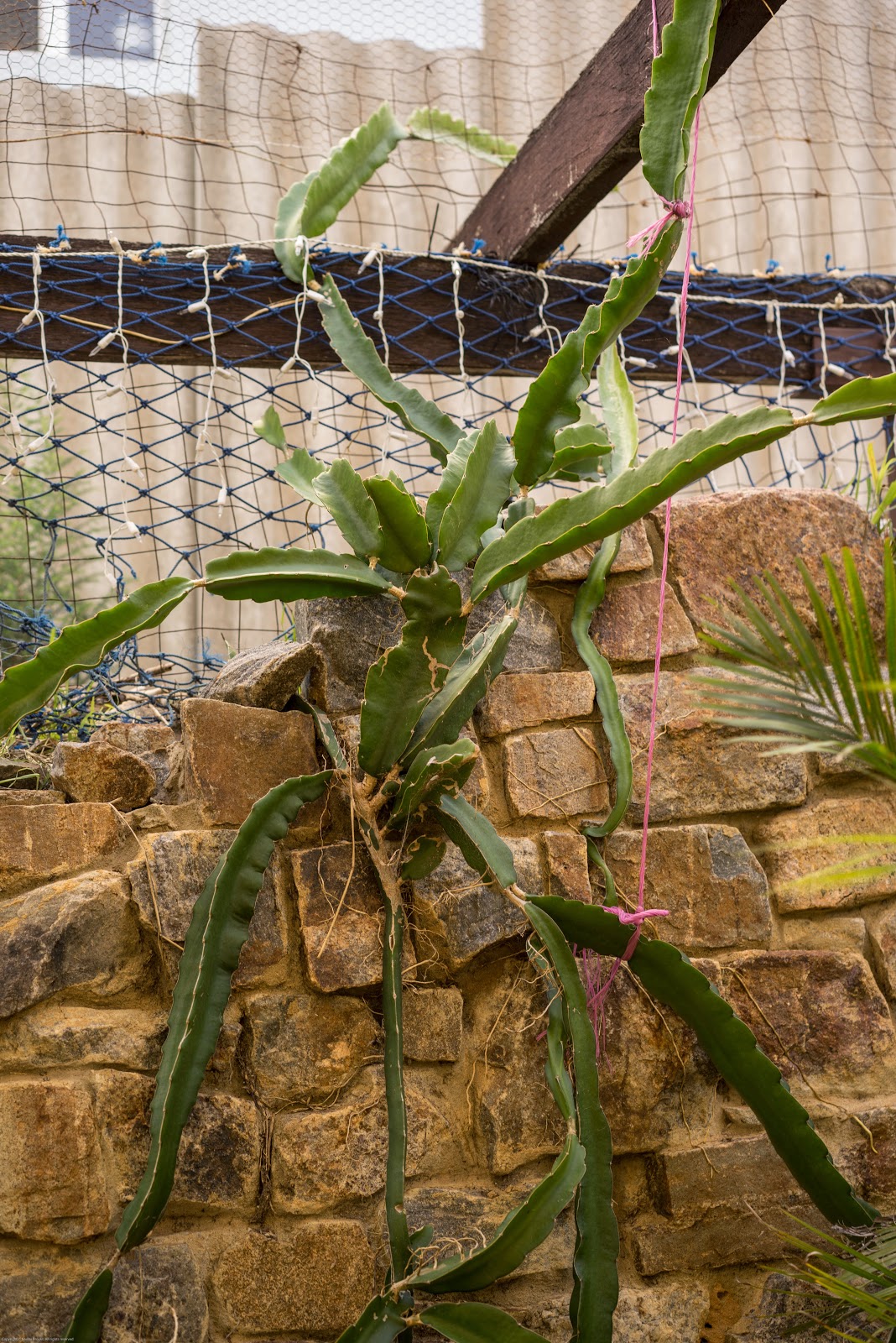 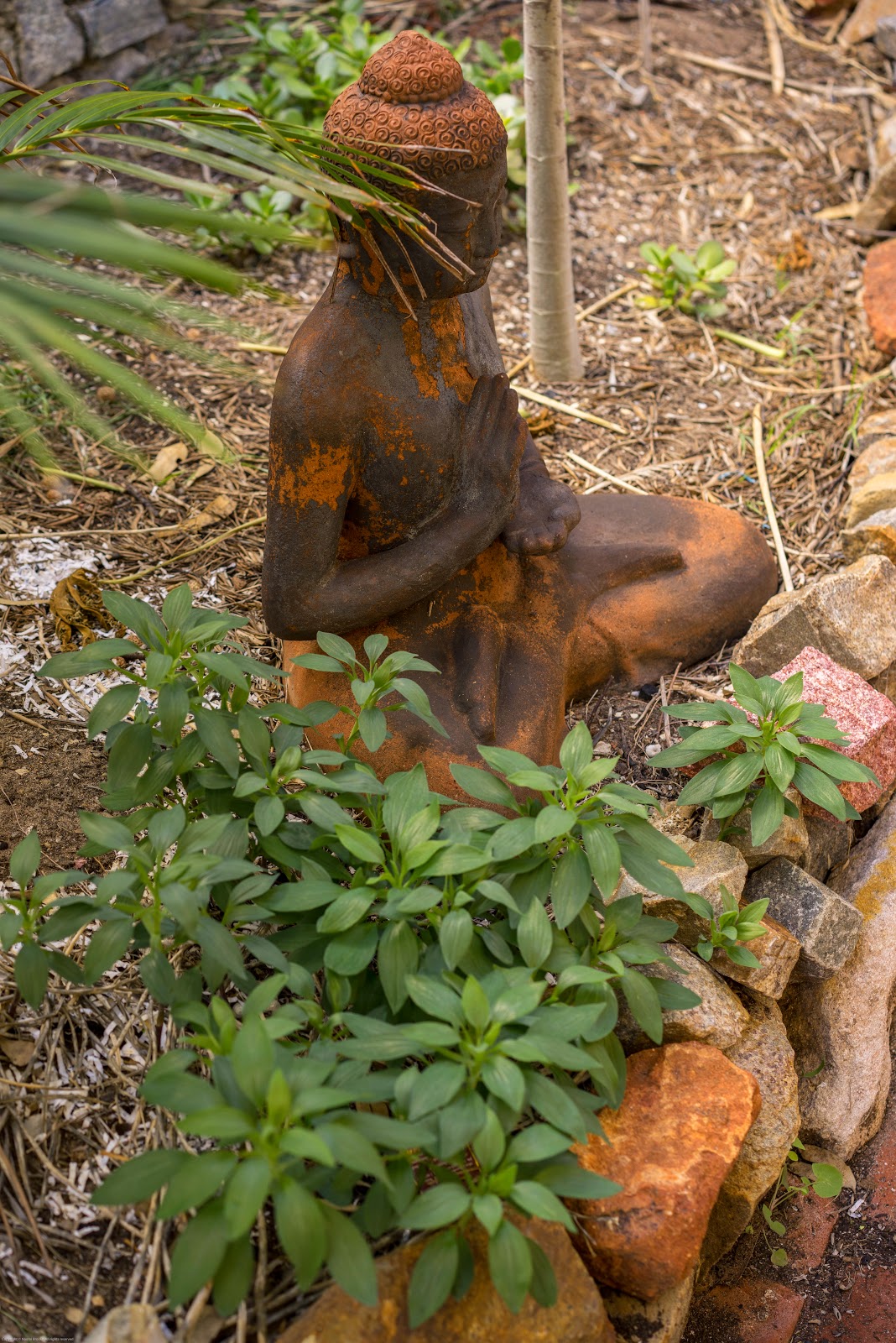 There's also other 4 or 5 dragonfruit plants powering along, once these all start fruiting I'll be giving them away! 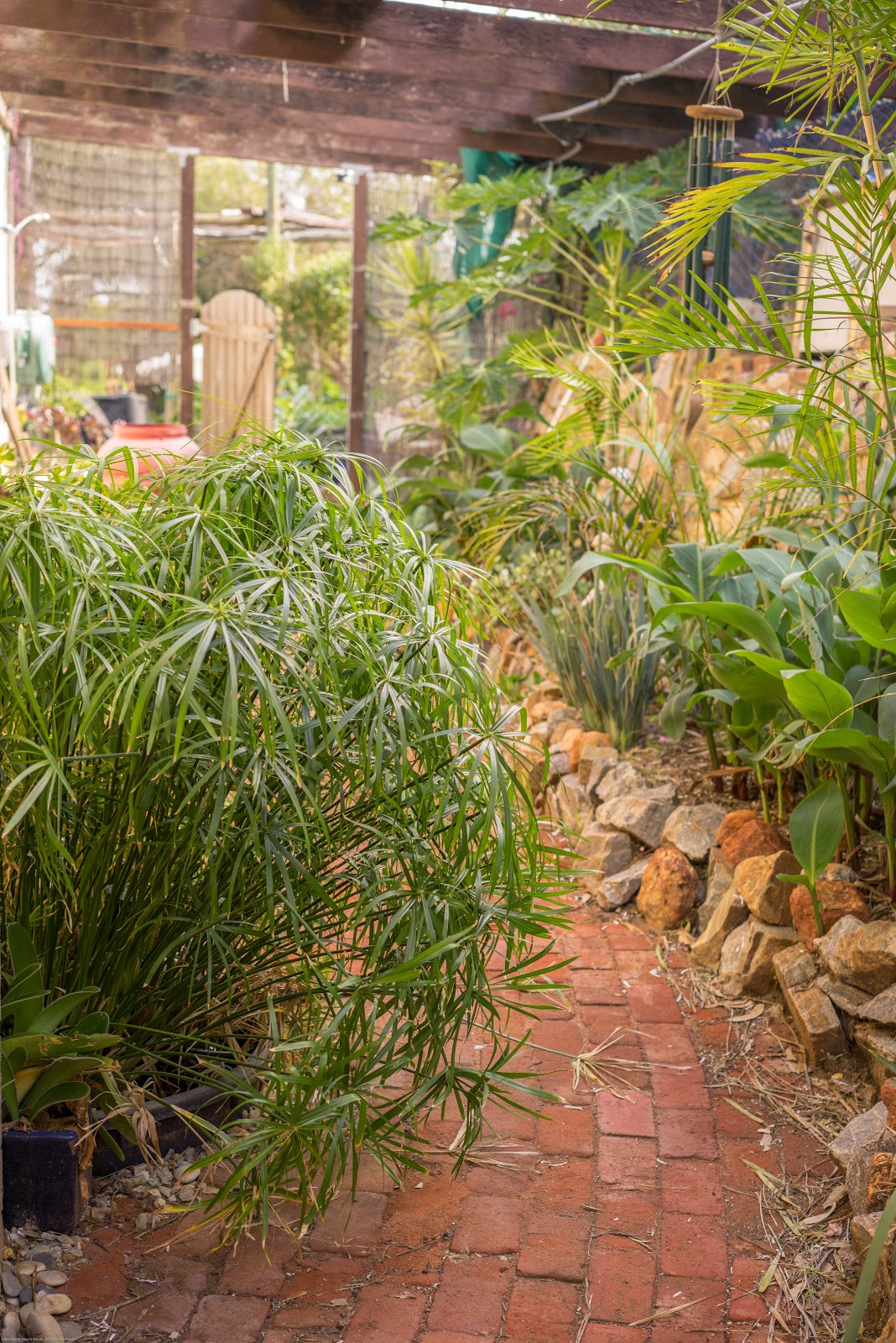 My pond has been overtaken by a dwarf papyrus (god knows how big the non dwarf variety is!), so I really need to get into action and finish landscaping the pond that is part of the tyre wall installation. My back injury has slowed down my ability to do heavy construction work, but with mindful digging techniques it's a project I hope to complete before heading off to NZ in July. 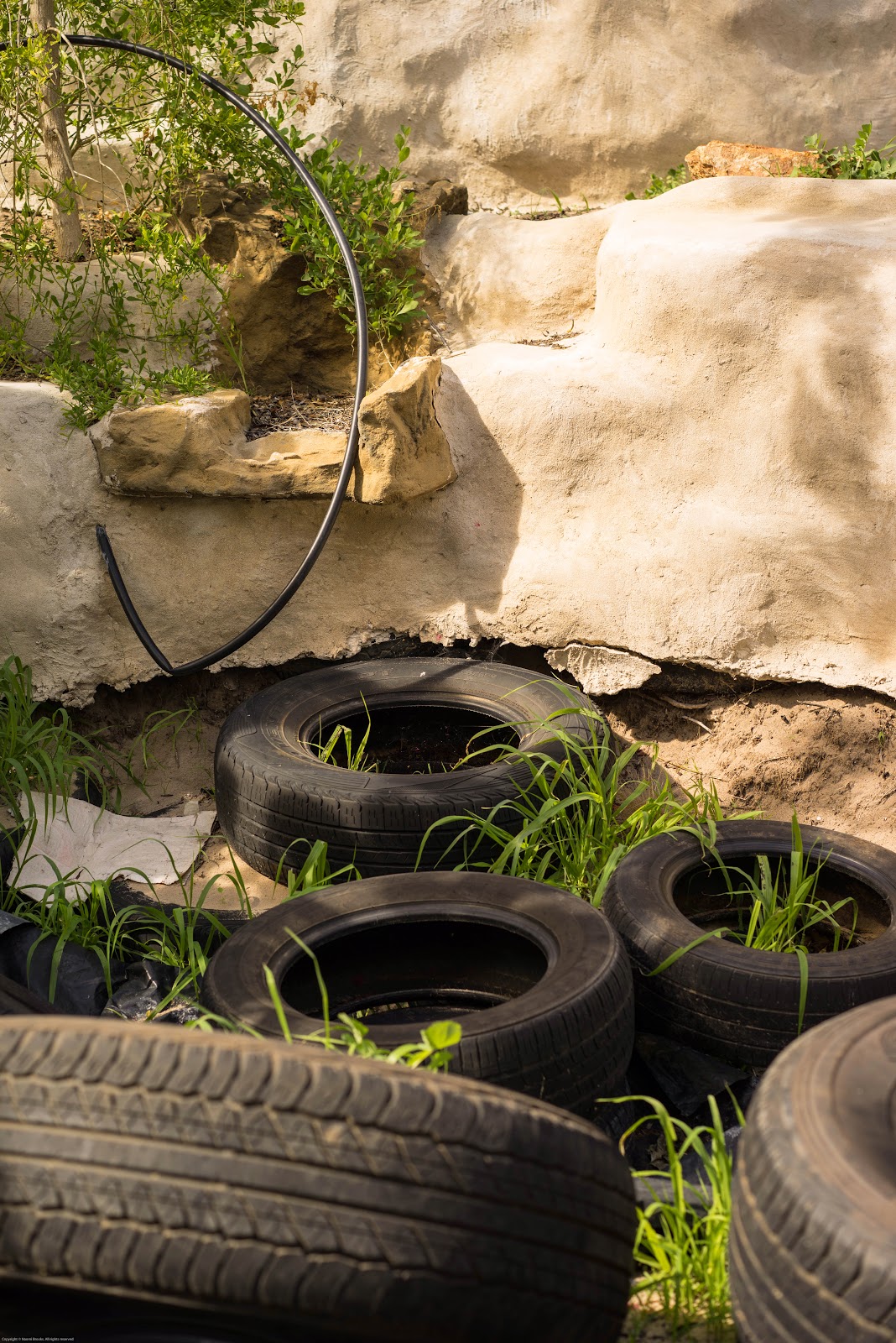 I'm particularly happy to discover that the rain has kickstarted a little patch of "Lippia" that I thought hadn't survived my various earthmoving activities in that area. Apparently it's a bit of a weed over on the east coast, but here it's a drought tolerant pretty little purple flowered ground cover that outcompetes most weeds. It should look nice around the pond and steps. 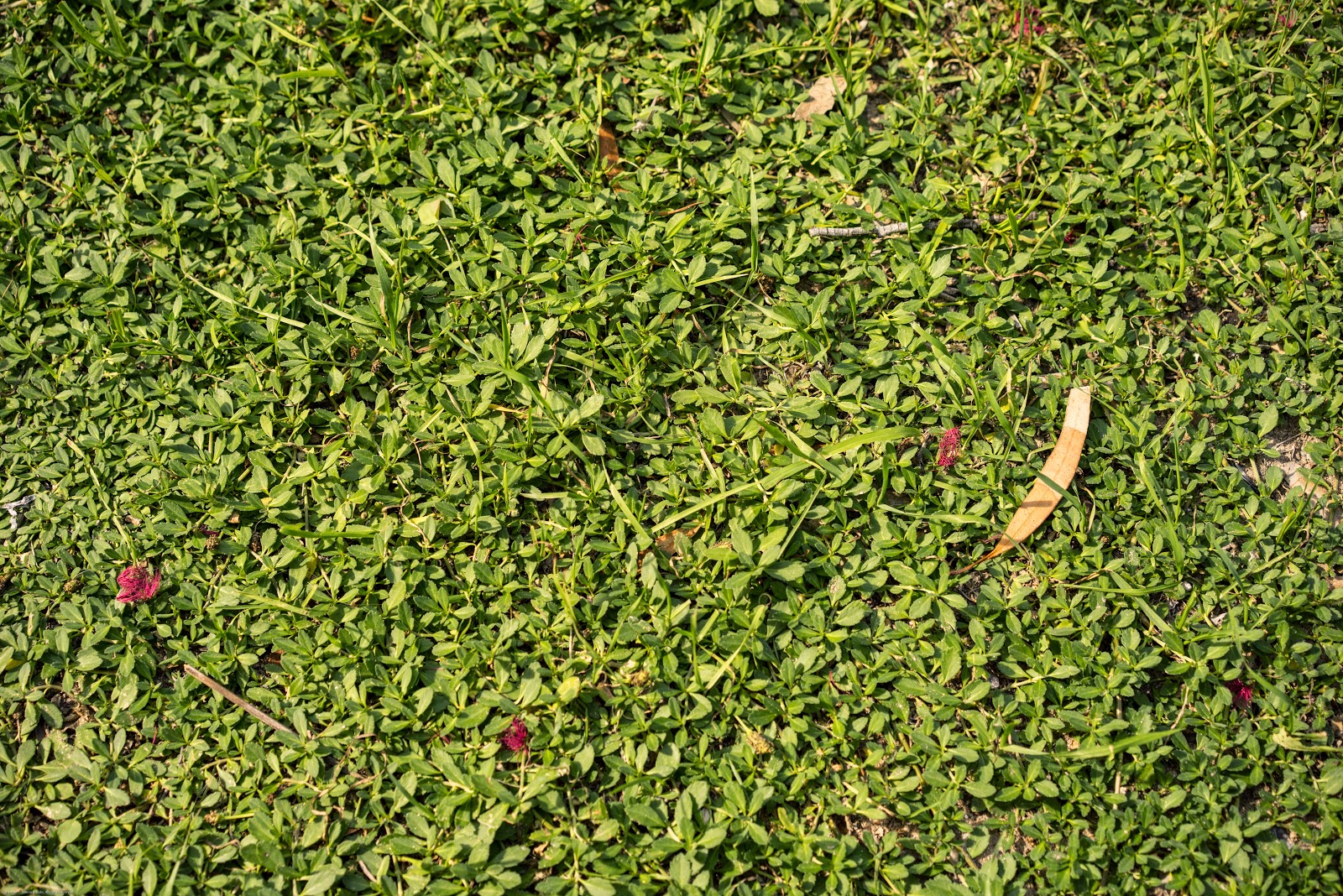 Now we are on the south side, which is currently a mess of a rock pile and a new wood pile. This area should be looking a little more business like before I head off this winter, still scratching my head as to where I'm going to put all them there rocks..... 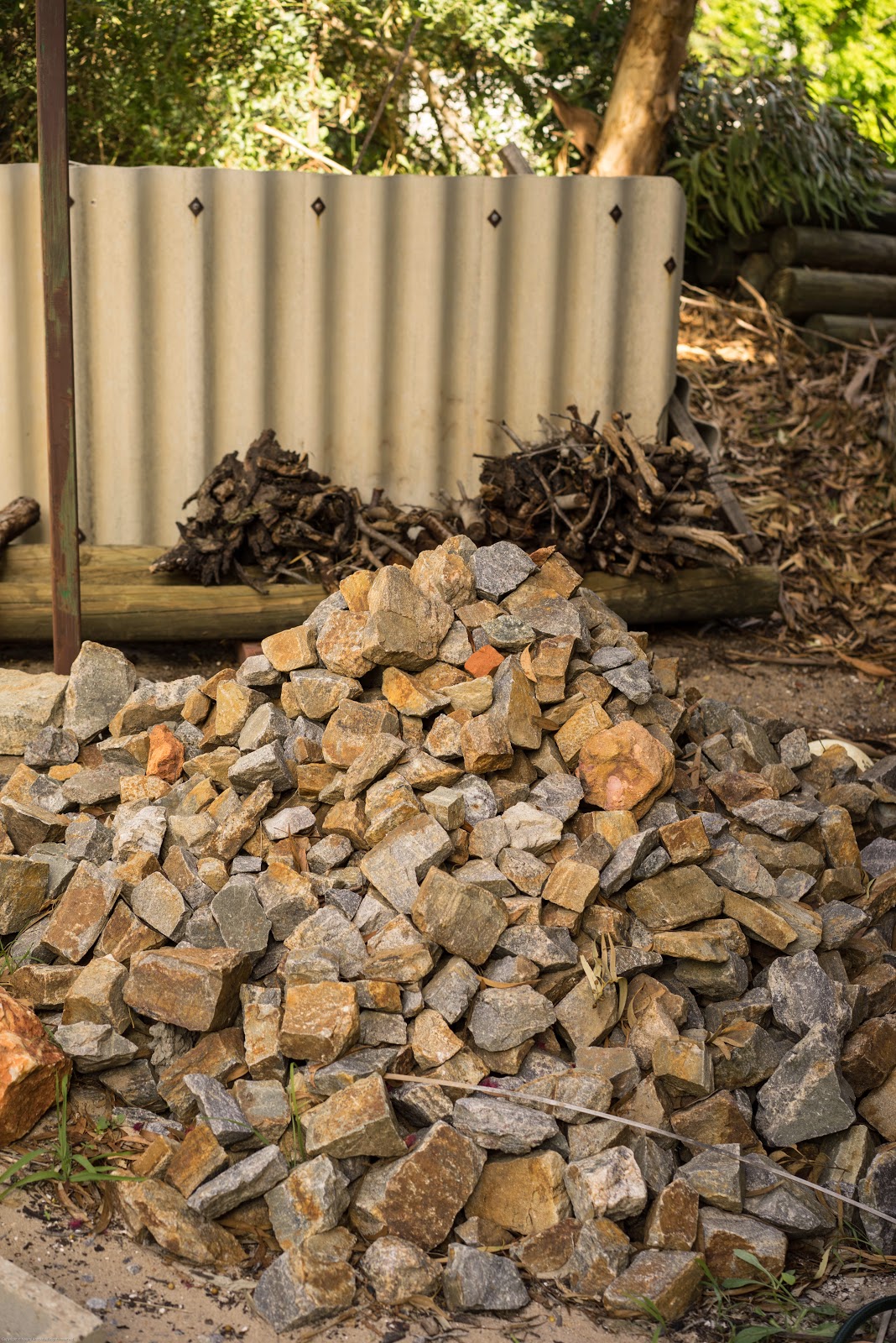 Recently I found a seedling in my vege patch, which I potted up and am nurturing until it gets just a few more roots going. I'm pretty sure it's a Tuart seedling. This is not the first time the Tuarts in the easement have self seeded, this is what happened last time.


Do I piss off my neighbours up the top of the hill by planting it back there? Or give it to my next door neighbours to replace the dying trees along their other fence? Their paranoid neighbour on the other side thinks they've been poisoning the trees, unaware that the previous owner pruned them heavily every time the greenery obstructed his ocean view. There is only so much abuse a plant can bear, before it succumbs...