After what can only be described as a pretty miserable skiing experience up in Central Hokkaido, and suffering a filthy hangover from too much sake and beer at our farewell dinner, I boarded a bus back to Sapporo airport. And yes, one of those ski patrollers was on the same bus and didn't even acknowledge me. Kind of reinforces what I thought of that particular man's character from the start....

At Sapporo Airport I transferred to another bus which took me to Niseko. Halfway we stopped for a toilet and snack break, and as I got up to leave the bus I heard through my hungover fog someone calling my name. Who else but a BFF's sister on the same bus! Small world... 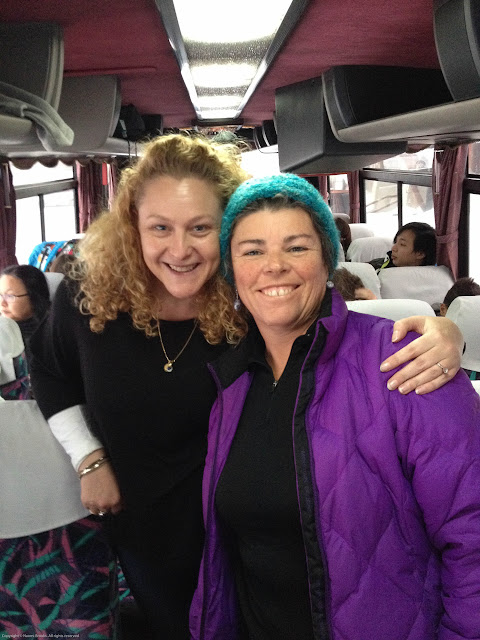 At Hirafu I got taken to the Full Note Pension where I am staying for 7 nights. I went straight to bed with a bottle of water, just emerging to greet my two new roomies, who are on a slightly different tour to me. They are both lovely women, and I'm a bit sad I won't be skiing with them as they are both very relaxed.

As it turns out my group consists of seven skiers and two boarders. Like on the Furano trip we have 2 guides: one a snowboarder, the other a skier, both also Thredbo patrollers. Brett and Keith, however, are older and a bit more experienced, and our group consists of 2 skier couples, two 66 year old snowboarders from Kuuai, and two other single skiers besides me. Both the girls in the couples are less strong skiers than their partners, so that's likely to stop too much aggression developing in the group.

Our first day we skied at Niseko. I started off in a really positive mood, went flying down a bumpy off piste run and ran straight in to a large ice ball and went ass over tit. Turns out ice cookies exist in Japan too, when they fall out of trees when the weather warms a bit. Oh well, up I got and kept skiing. Then Bruce, one of my fellow skiers collided with me. It can be a bit difficult skiing in a group when some skiers traverse rather than ski the fall line. If I know I'm going to take my time getting down I'll stay back and let the enthusiastic ones go first, but in this case I was happily skiing the fall line when Bruce came in from one side and put me off balance.

So after I got up from the Bruce collision we skied some more. I was still tired and hungover from my previous ski trip, and with quite a few long traverses and a few more falls I was exhausted. But a good day.

Day 2 we went to Rusutsu. Brett didn't want to guide all seven skiers, so Bruce and I were relegated to ski-ing with the snowboarders in the morning, and then Bruce headed off back with the skiers in the afternoon when I and the boarders decided to stop early.  Although I was skiing the off piste,  I was still falling a lot, and my ski confidence remained pretty shot, especially on the long traverses out to the piste which could be fast, bumpy and quite hairy. 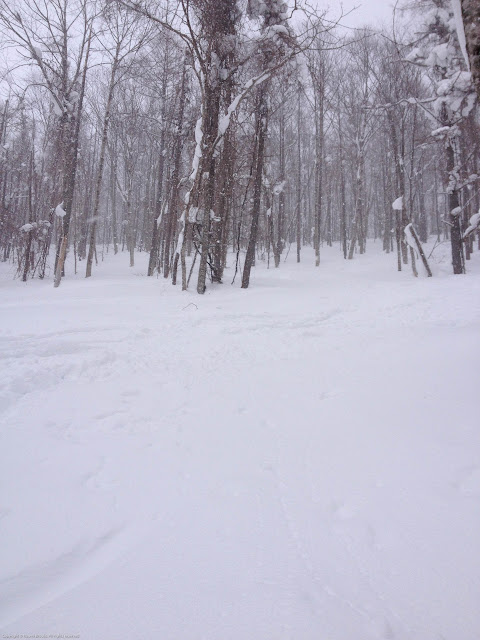 Day 3 we went to Kiroro. Bruce had defected back to the skier group, and Brett had been replaced by Wilko, as a guide at Furano had bunged his knee and Brett headed up there to fill in. I was still with Keith and the two elder snowboarders, and we headed off the gondola into thigh deep pow. I unfortunately ejected a ski after 3 turns, got back into it, ejected it again, got back in, then got caught in a deep snowdrift trying to traverse out into a glade and had to dig myself out. Meanwhile my group had abandoned me so I at last made it down to the valley floor (after one more double ejection) and skied out the traverse track myself and waited at the gondola for Keith and the boys to return. My confidence was shot! Then I skied one more run before lunch, had another run or two with them after lunch, then Wilko took me for some runs by myself to get my confidence back. 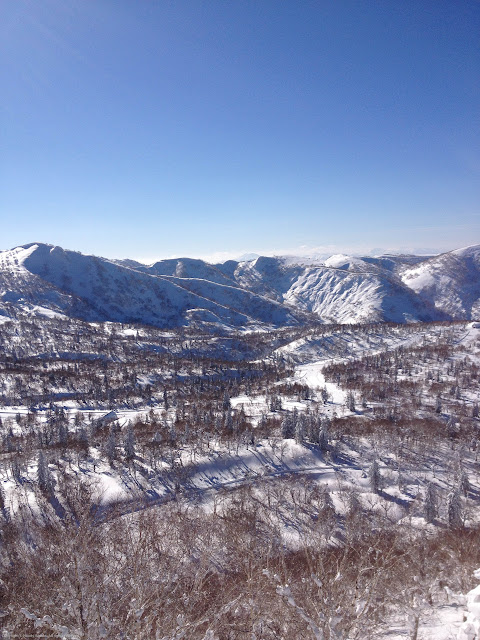 Wilko was great. First we skied on the piste getting me to ski with both my feet instead of transferring weight the way you do when carving, then he found some nice tree free glades with fresh pow to practice on. Skiing my boots rather than trying to turn my skis through the trees seemed to be the piece of advice that worked the best, but after a couple of runs fatigue from digging myself out of numerous falls and getting upright again in thick snow took its toll, so I gave up for the day.

It wasn't a great day, but Wilko's help and advice in the afternoon really made a huge difference. As did going for a massage with my old friend Mariko. 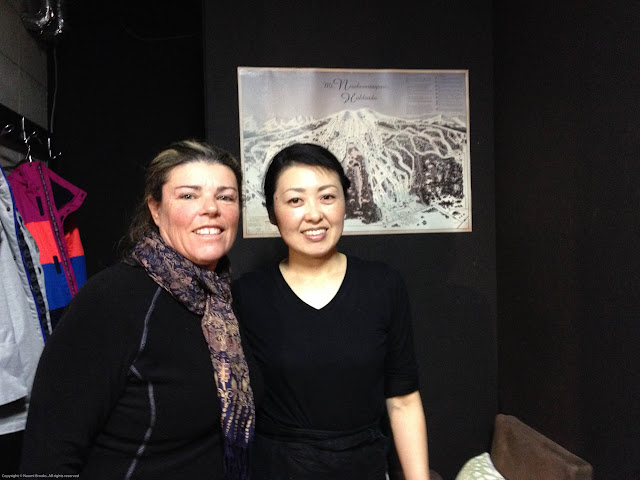 Day 4 was a miserable foggy day at Niseko with no fresh snowfall overnight. Visibility was dreadful. The snowboarders opted for a day off, so Keith took the skiers, whilst Wilko took me for a private session. We found some nice untracked terrain off in the Hanazono region, but the visibility was crap and the upper lifts were on wind hold, so I was happy to give up after lunch, though the rest of the skiers kept going despite the abysmal conditions. 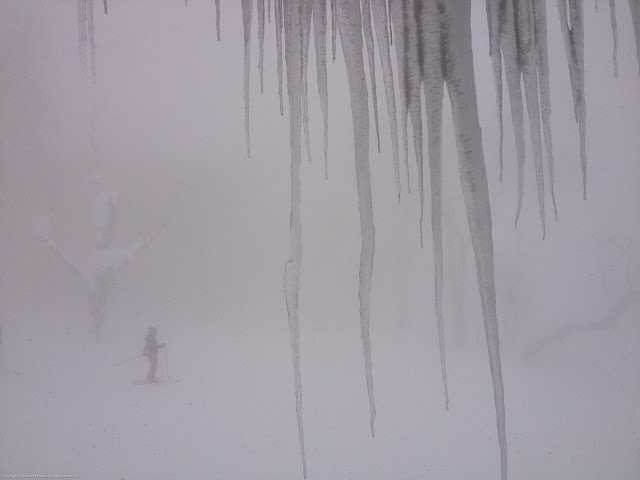 It's not just because I've got a month skiing in Japan, but because I no longer have ski fever, that I'm happy to just ski when the conditions are good and to give up when I'm tired. Doing entire ski seasons has changed my attitude away from needing to squeeze every hour out of my ski ticket. Just because I've paid for it all doesn't mean I need to use it all. I can enjoy my holiday any way I like, and truthfully, I'm happy for it not to just be about skiing.

Day 5 we headed back to Rusutsu. I asked to stay with the skiers, as I felt that Wilko's encouragement had helped me get over my confidence hump, whereas Keith is naturally a more dour personality. Plus, snowboarders pick slightly different terrain to go down, needing steeper fall lines to keep their speed up. While I'm getting used to tree skiing, I don't need massive speed at the same time.

And I absolutely caned it! Wilko couldn't believe it! I was often the second or third down to the bottom, skiing straight down the fall line, especially as the trees are quite widely spaced at Rusutsu, so it's not so trippy. I went from being the slowest to one of the fastest, just by getting my confidence back. I'd said to Wilko that my problem was primarily psychological, and today I proved it. It felt so good to have my mojo back. In the evening I met up with Akane. So good to see my friend again. 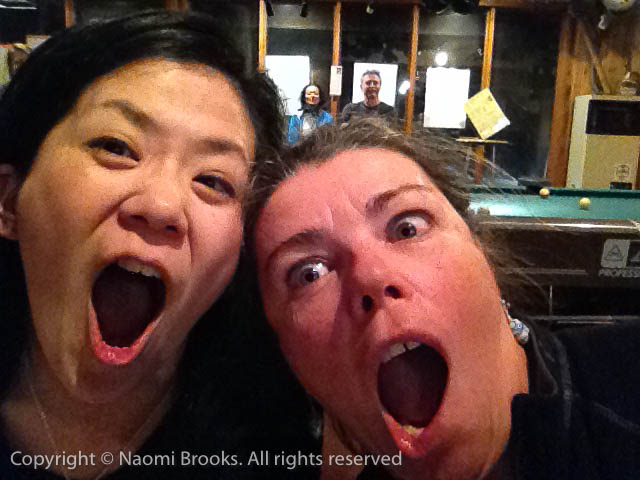 Day 6 we went to Moiwa, which is the next resort around the mountain from Annupuri, where I'd stayed last year. We found fresh lines all day, it was an absolutely cracker of a day, although I did have a nasty fall onto my shoulder when my skis got caught up getting off the chairlift. 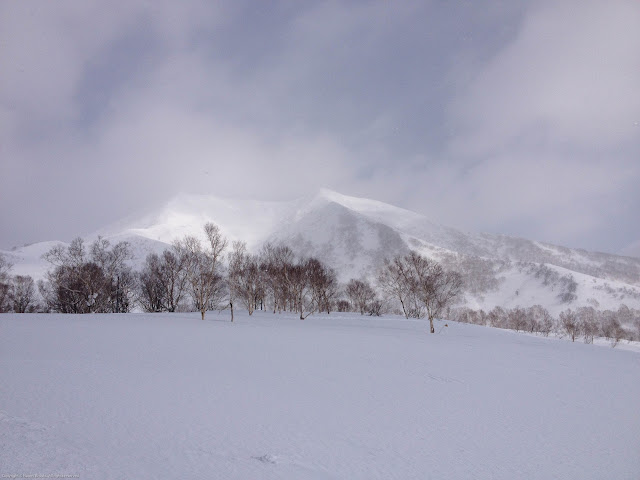 Day 7 we packed our bags and headed to Kiroro again. The forecast is for rain the next 2 days, so this is likely to be our last chance of decent skiing. And I had a demon to exorcise, as Kiroro earlier in the week had been my worst day. Well it hadn't snowed for a few days, and unlike last year when there were far fewer Westerners, the place was heaving with them, so finding fresh lines was a little more tricky. But Wilko delivered most of the day and that dragon was well and truly slain. Those traverses out are still freaking scary, but skiing through the trees in untracked, and even tracked up, snow is something I now feel more confident with. 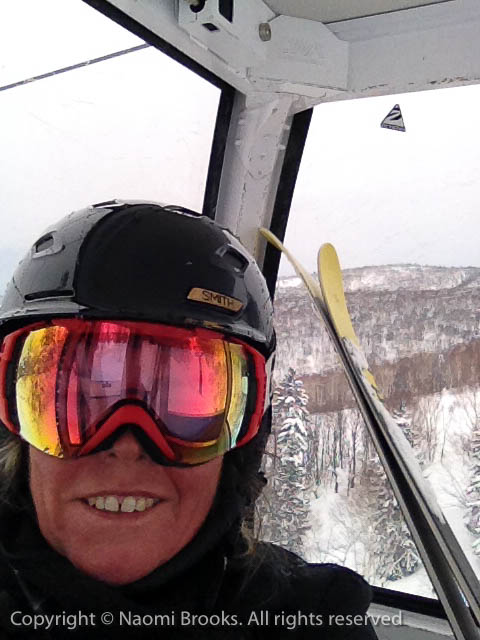 My group this trip is much more cruisy. Sure a few of the guys were adrenaline junkies, but they either had wives to think about, or weren't that skilled to be able to push the agenda to harder and faster, unlike on my Furano trip. So I was able to not only keep up, but often be one of the faster ones. I still had a few ejections, mostly when I got tired and didn't compress my knees enough to absorb a bump or soft patch of snow, but instead pitched forwards, releasing my bindings. I'm reluctant to tighten up the bindings, preferring to improve my technique instead. It is tiring getting up after a fall, but it's better than a major knee injury....

After Kiroro we headed to Otaru, which is a port on the Sea of Japan, where we are staying at the swanky Grand Park Hotel for 3 nights. As the only single girl I've lucked in on a room to myself! That evening we headed in to the old district for dinner, viewed the candle festival in the canals, and found a cute little cocktail bar. 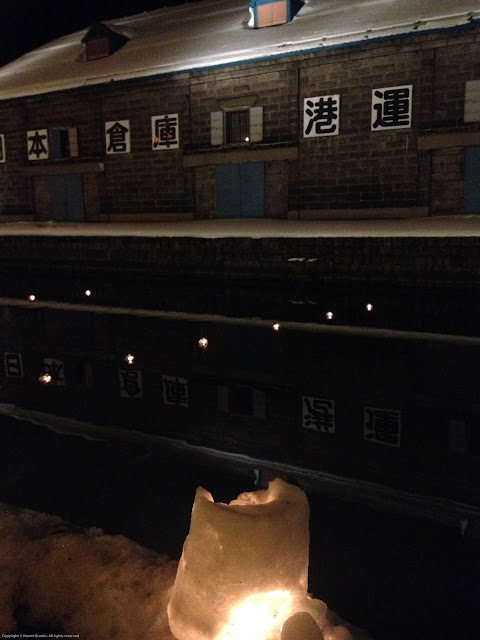 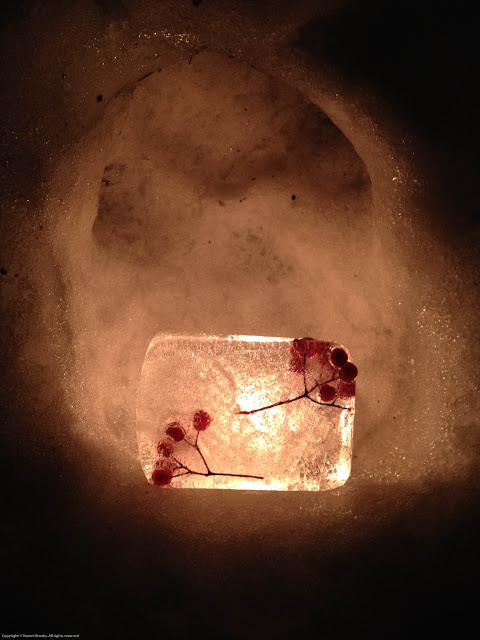 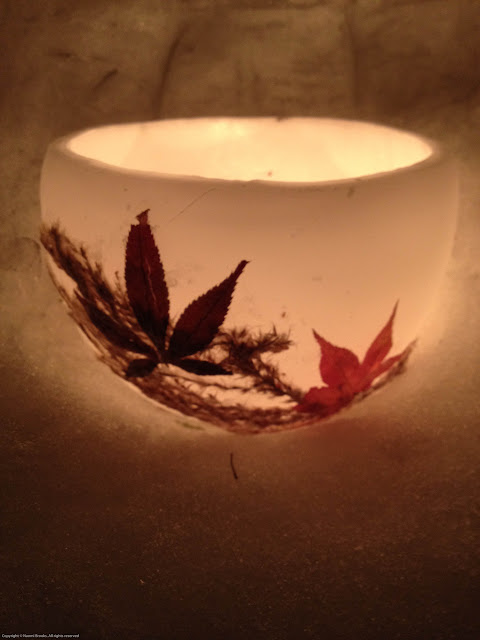 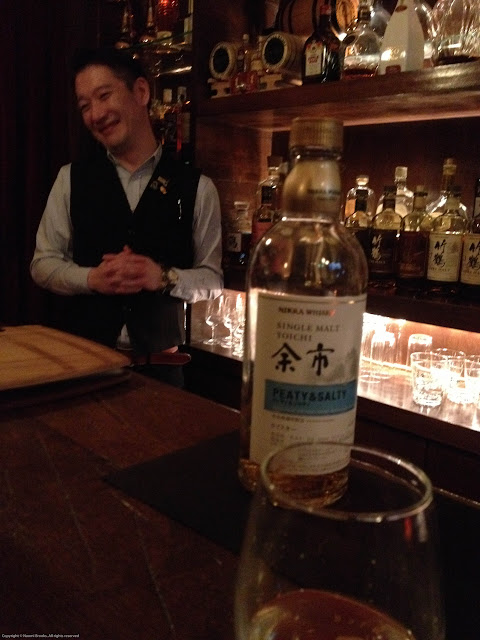 Day 8 it was raining as expected, so we did a little shopping and went to Yoichi to visit the Nikka Whisky Distillery for lunch and tastings. 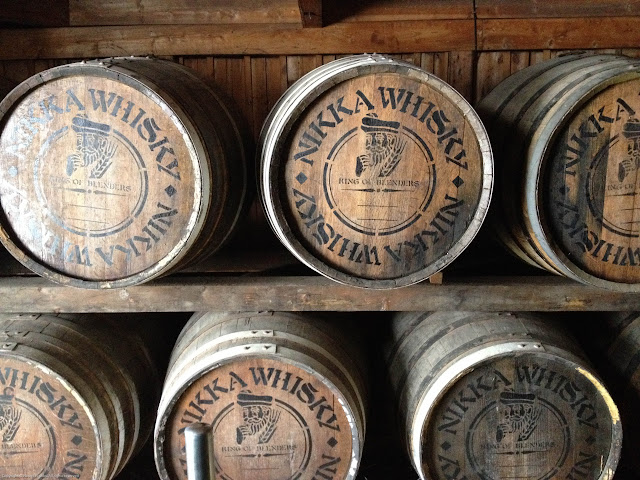 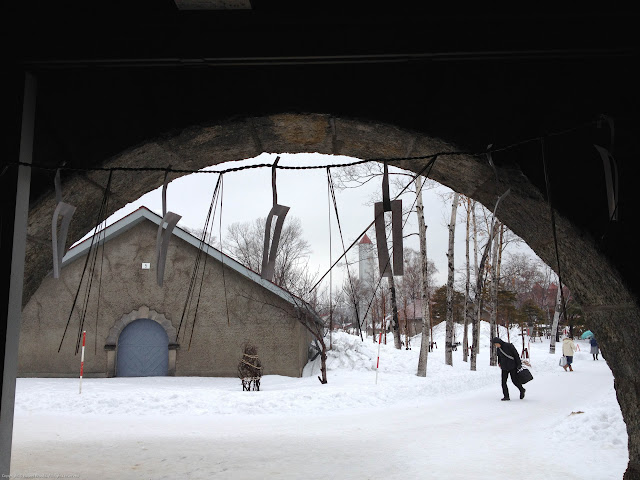 Day 9, our final day, it's still raining. A few of the crew headed off to Kokusai to ski the piste - not my preferred option with fat skis and with a knee that's still swollen. It only causes pain trying to straighten it or twist it, so I elected to rest again and ice it up. Watch a movie and update my blog.

Our final night we headed out for a farewell dinner at an all you can eat crab restaurant and then the following morning took a train from Otaru to Chitose Airport to fly to Tokyo for my next adventure. 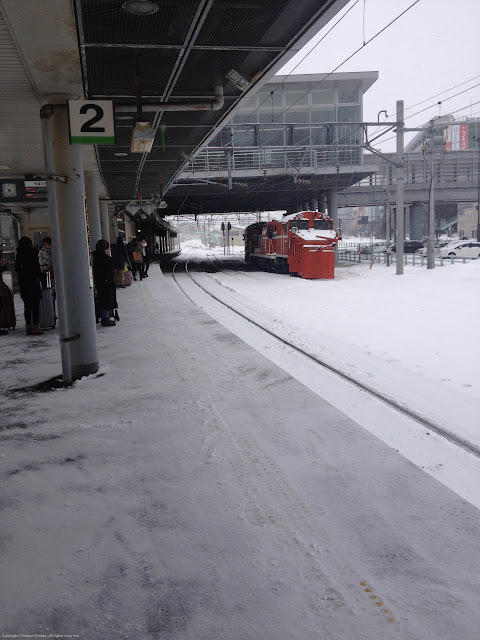 So, in summary, this trip has been a much better trip. Nicer crew, more experienced helpful guides, less gnarly terrain, and help to get over my loss of confidence in my skiing. I'm back to skiing easily in the fresh pow, not finding the heavier snow a problem, and am almost comfortable in the trees. I'm yet to feel less than scared on those narrow traverses out though....

Roll on the next adventure....