My first day in Japan was spent travelling to Furano, which is in Central Hokkaido. That was the last post.

Day one of our ski trip we went skiing at the nearby Furano ski field. We'd had fresh snow overnight, and it snowed on and off all day. Our groups split up into a ski group and a snowboarding group and headed up the ropeway. We did a couple of runs on the groomed slopes, nice and cruisy, quite steep but nothing gnarly, and then headed into the trees. 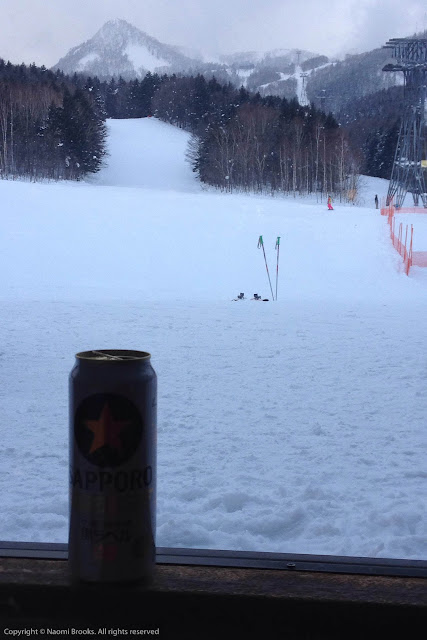 First it was OK. The snow was lovely and soft and I had a couple of good runs, and then the runs seemed to get narrower, steeper and bumpier, and I started getting tired. So off to the gypsies went my confidence and technique. I was hitting bumps, getting air, falling into ditches, ejecting out of my skis, struggling to get upright again in deep snow, yeah it was exhausting…

It didn't help that I was skiing in a group of men, 3 of whom were ski patrollers at Perisher, and keen to go hard and fast. Even at the top of my game I was never going to keep up. A fourth was a kiwi skier who was feeding off the adrenaline of the other three, which left me and Lyndsay, a 63 year old from the Central Coast of NSW, to bring up the rear. Lindsay may have been slower than me, but he had more confidence, and often helped me up after my numerous falls. The others just waited impatiently at the bottom for us to catch up.

Day two we headed off to Kamui Links. Here I had a good day, especially in the morning tree skiing off the back and then traversing back to the chairlift. By the afternoon I was shattered, so I left the boys to it and finished early. 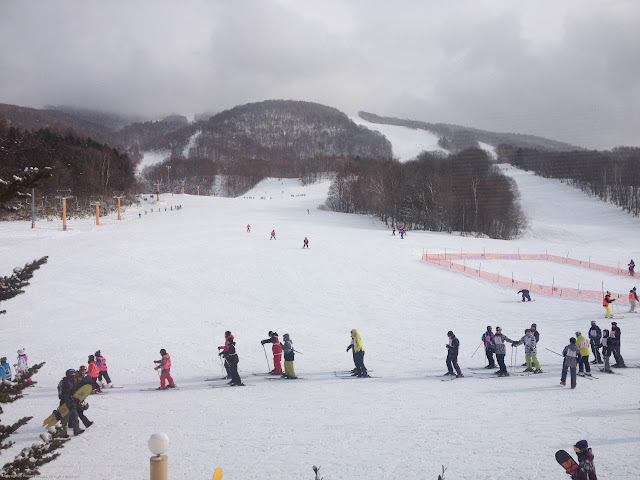 Day three was back at Furano, skiing some lovely lines in knee deep powder. I was starting to get the rhythm of it all when bang! I twisted my knee and down I went. With pain in the front and side of my knee I knew I hadn't done anything too serious and I could still traverse out and ski down to the base where I booked in to see a physio. Looks like I've got a mild medial ligament sprain, and exacerbation of my old meniscal injury from years ago, which should be fine to ski on with a little strapping, icing to keep the swelling down and the wearing of my knee brace (lucky I packed it!).

Day 4 was a rest day. Not much to report. Iced the knee and went to a Japanese barbecue restaurant for dinner.

Day 5 back at Furano. The rest of the crew headed to Asahidake, but I stayed in town for the day, doing some  piste skiing and taking it easy. Went back to the physio in the afternoon for another session and more strapping. Conclusion is the ligament sprain is very minor, it's mostly just a meniscal injury, so as long as I can keep the swelling down all will be well.

Day 6 again at  Furano. My confidence off piste has gone south so I ditched my guide for the day, letting him concentrate on the rest of the group whilst I concentrated on getting centred again on my skis and skiing the sides of the piste runs and a few bumps. I tried a tree run, but it wasn't pretty. I'm yet to get used to seeing the gaps. After lunch our guide tried to take me down a tree run with the rest of the crew but I politely refused, and instead ended up on a gnarly, bumpy, ungroomed black run that was probably harder to negotiate than the tree run I'd just refused to go on. The good news is that the knee feels good, despite swelling up at the end of the day.

Truth is the boys in the group have completely psyched me out. Being so much better skiers than me, with no fear and lots of aggression, I just feel a total loser. They feed off each other and the testosterone flying around is as intimidating as hell. I am now skiing worse than I was a year ago.

Even our tour guide Seb, a 24 year old ski patroller from Thredbo, isn't much help, mainly as any time he spends trying to help me is resented by the rest of the group. And let's face it, skiing hard with a bunch of fit, enthusiastic skiers beats dealing with a scared old lady with a bung knee.

Day 7 was a rest day. A few went skiing and a few of us headed in to Furano town, a kilometre or so away from the resort area,  to do a little shopping. We found a little shrine, some good souvenir stores, I found some hand made wooden spoons, and then we found an artisan coffee shop. Damn nice coffee can be found in the sticks of Central Hokkaido. 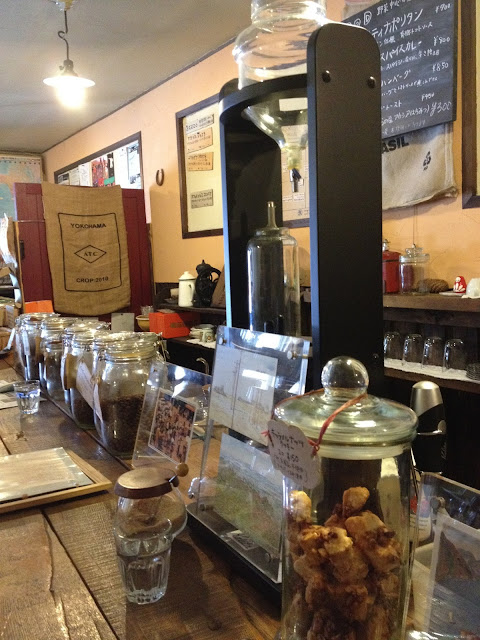 Day 8 saw us head to Tomamu. Despite protests from our guys that the snow was better at Furano so why go elsewhere. Well chaps, because the tour doesn't just include you selfish bastards, and some of the snowboard crew were having similar issues with being dumped by the better boarders and left to their own devices.

Tomamu is a huge resort where large parts of the infrastructure have been abandoned as the money has gone out of skiing and snowboarding. Huge accommodation complexes lie deserted, lifts and gondola towers are neglected beyond repair, but there's still huge amounts of terrain to explore. It's less steep and much more open, and we managed to find some great untouched terrain most of the day. I gave up just before 2pm due to exhaustion, and let the rest of the guys enjoy the rest of the day without me falling over continuously. Once I get tired, it's best I just stop. After all, I have a whole month here, not a mere 10 days like most of the people on my trip. 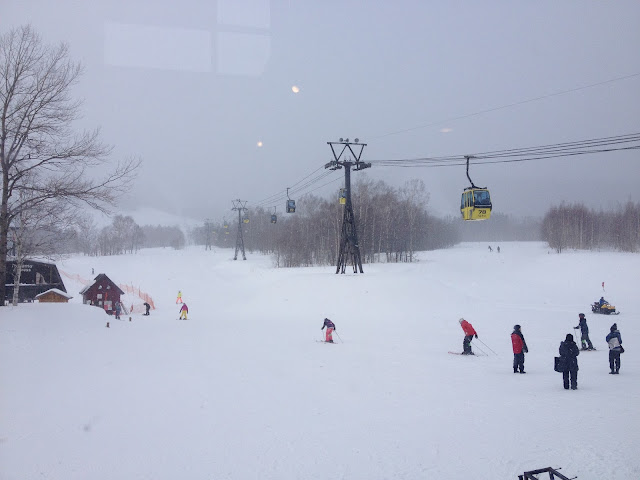 Needless to say, everyone had a great day skiing untouched pow all day, despite the morning protests. We stopped in at the swimming pool complex (complete with wave pool, SUPs, onsen and all sorts of beach oriented paraphernalia) to have a peek, before driving back to Furano.

Day 9 back at Furano, this time with sunshine, and after one begrudging run down one small tree run up the top of the hill we managed to lose Lyndsay. The boys were keen to go off and ski more gnarly terrain as they had "unfinished business" so I told them I'd just fuck off and do my own thing and let them enjoy the services of the ski guide that gee, I'd paid for too. Seb offered to take me for some runs by myself just before lunch and then very thoughtlessly told me that the others felt that people like Lyndsay and me shouldn't be allowed on trips like this because we couldn't keep up. Well that really helped my confidence didn't it, so I pretty well told Seb to fuck off back to his boys too. 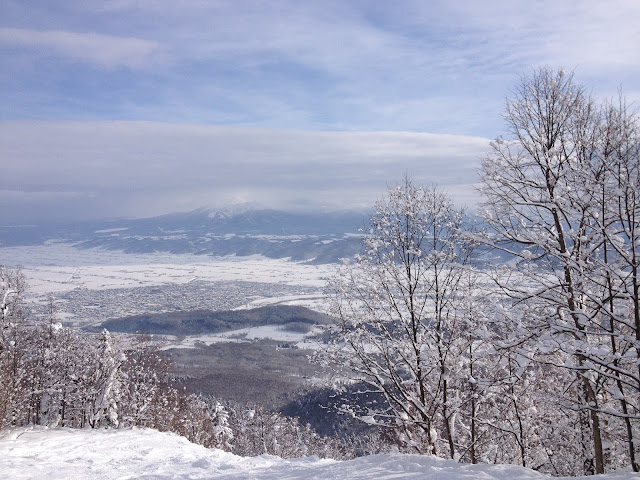 In the afternoon I ended up doing some runs with the snowboarders, mostly with Chris, a GP from Brisbane, and did a number of small tree runs, taking our time and really enjoying myself. No pressure, just cruising, no negativity. I just wish they'd done the groups a bit differently I might just have enjoyed my trip a lot more.

So in conclusion, my trip to Central Hokkaido was pretty crap. I injured myself trying to keep up with people who were far too aggressive skiers for me. Instead of splitting the groups on ability they split them between skiers and boarders, which didn't work well for either group. I lost my confidence early, and then that fickle little monster fear crept in, and continued to haunt me since.

Next trip, hopefully things will improve. Though I still have a swollen knee....