Invincibles, and Scaring Myself on The Dart.

A couple of weeks ago I ran into an old acquaintance in Te Anau. Gerard and his wife, who are from Melbourne, frequently visit NZ each winter to go ski touring, and I had met them a number of times over the years whilst staying at Wanaka Bakpaka. Also keen trampers, they were over for a few weeks, but Gerard was staying a bit longer so I had said I'd be happy to go on some walks with him. Which is why I ended up in Glenorchy one cold rainy day.

Gerard was staying at the extremely posh eco resort Camp Glenorchy, so I joined him in the bunk rooms, which were not too expensive at the out of season discounted rate. The place was really impressive, being a passion project of a couple of very rich Glenorchy landholders, who employed local craftspeople to custom build the resort using a lot of recycled and local building materials, as well as high tech solar and wind energy, water saving and reuse systems, including composting toilets. The communal kitchen is very special, not quite what one is used to at the average backpackers! After building the resort, it was given to a community trust to manage for the benefit of the local community. I had a few gripes with the place though, like not having paperless billing systems, and the use of paper hand towels in the bathroom, plus I would have liked to see more locals being employed there.... 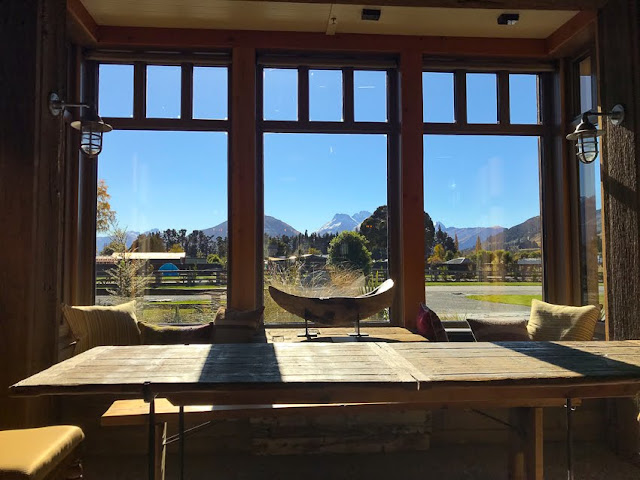 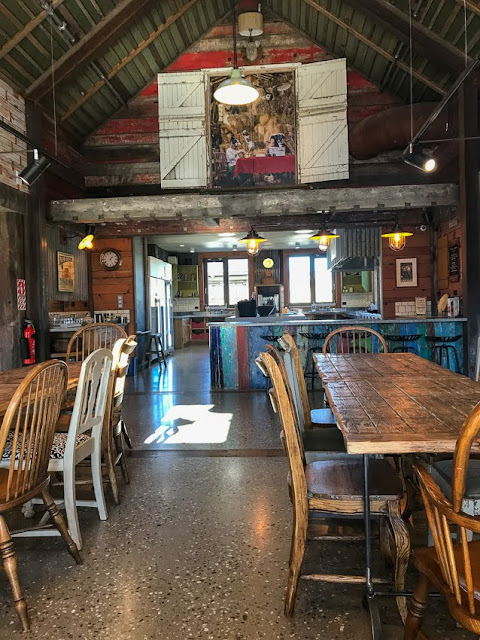 Anyway, Gerard and I headed off on a short day walk up to Invincible Mine site, named after the nearby stream. You may remember I'd been to the Invincible Skifield last year on a ski touring trip... 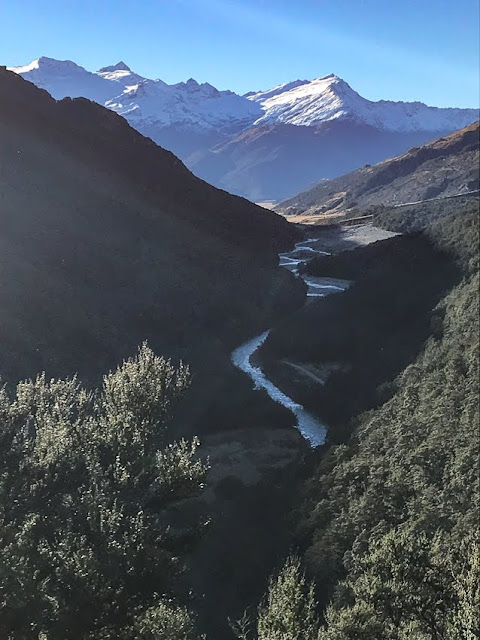 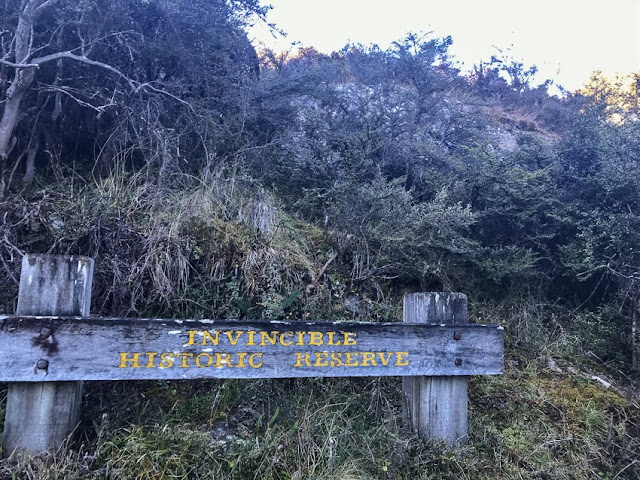 This was an abandoned gold mining site, and had been a fairly substantial place despite being in a very unforgiving environment. It's a good hour of walking uphill to the site, where a tailrace brought water from the nearby stream to the workings.


"The underground mine was operated by the Invincible Quartz Mining Company from 1882, until they lost the reef in 1887. The battery yielded 325 ounces from one crushing, and worked 24 hours per day, crushing 90 tonnes of ore per week. Around 7500 ounces of gold in total was recovered in the mine's history, at an average grade of 30 gr per tonne. Efforts to re-open the mine in 1902, 1912, and 1922, all came to nought. The underground workings have collapsed. "

We had a look around at the remains, and then headed back down the Rees Valley to our posh Glenorchy bunkhouse where I cooked up a delicious roast dinner. 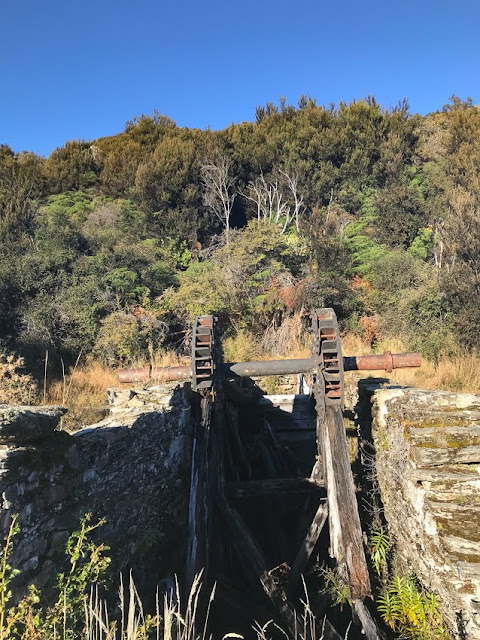 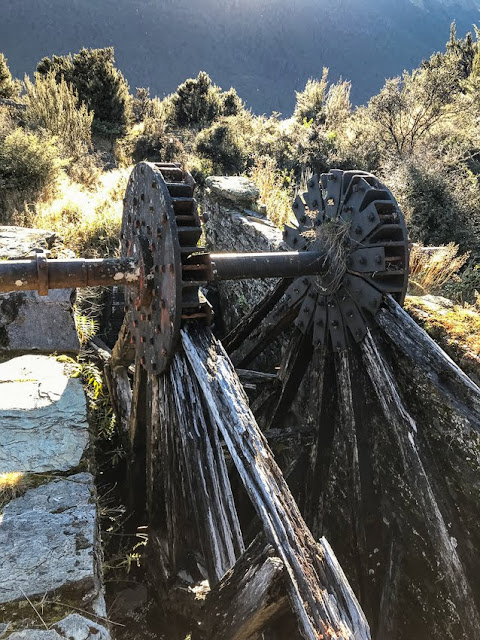 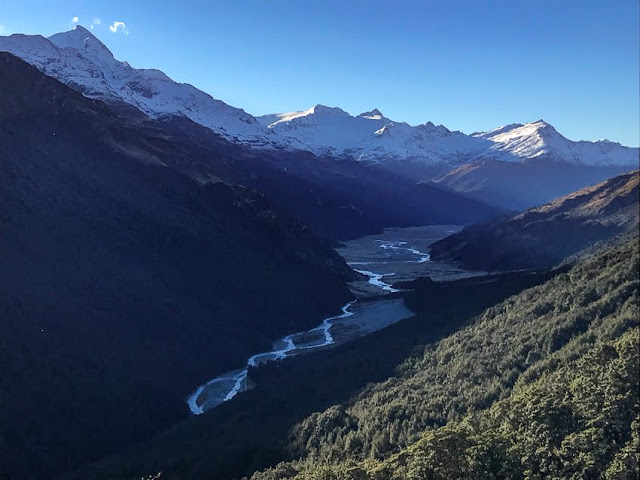 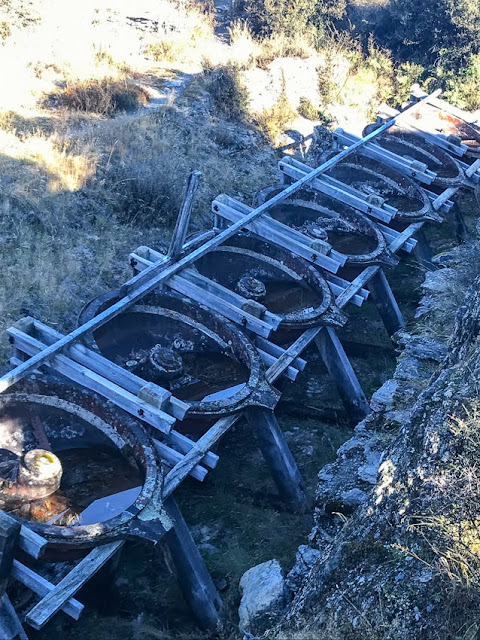 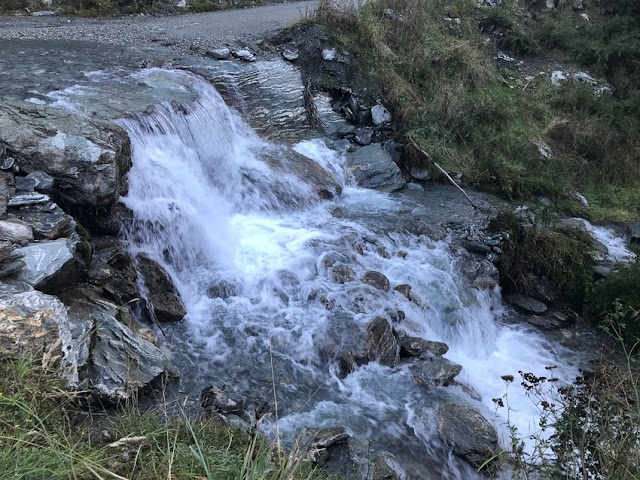 Unfortunately, after luring me all the way up here from Dunedin, Gerard had to suddenly head back to Australia due to family issues, so he donated me all his groceries and headed off to Queenstown for his flight to Melbourne. So I dreamt up a trip up the Dart.

I wanted to do an overnighter with the packraft, where I would have to carry it for a substantial amount of time. This would help me work out the logistics and weight issues before tackling a bigger project. The Titiroa trip had involved a negligible amount of carriage of the packraft, as I had left it at the hut for the summit climb.

I decided to walk up the Dart River to the first hut, stay the night and then paddle back to the car. The river was supposed to have some Grade 2 sections, and to be a little hairy below the lake, but otherwise mostly Grade 1 on a braided river. Gavin, one of the fellows I met on the Doubtful Sound trip, had paddled it and had advised me that all the rapids had accessible portages, which means you can choose whether to run them or not....

I left Glenorchy, driving up past Paradise to Chinaman's Flat carpark where I put the walking boots on and shouldered the backpack, complete with protruding paddles. The track stays fairly close to the true left of the river most of the way, allowing me to scope as I walk. But it's still a tramping track, and not a well maintained one. I soon discovered that having paddles sticking out of your backpack can be annoying when scrambling between rocks and vegetation. The weight wasn't too bad, as I only had food for an overnight trip, and no tent, but it was clear that my current 40L backpack was too small for the added bulk. 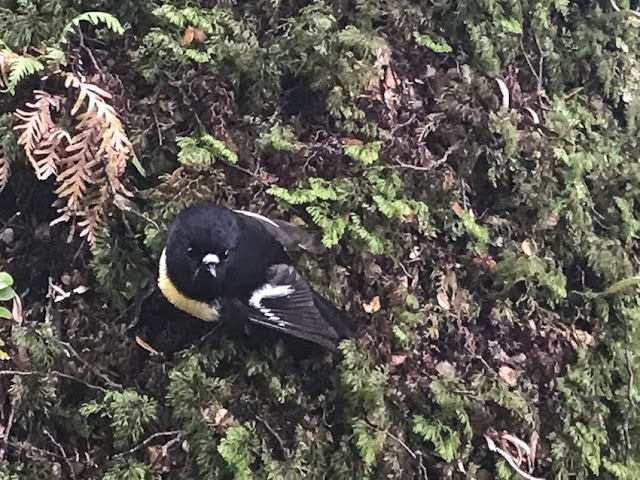 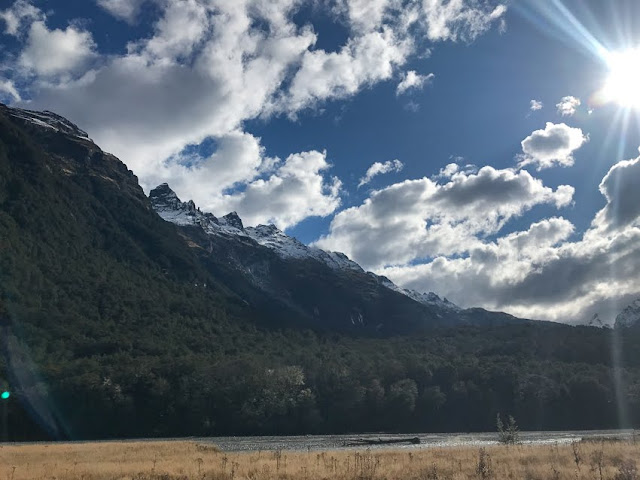 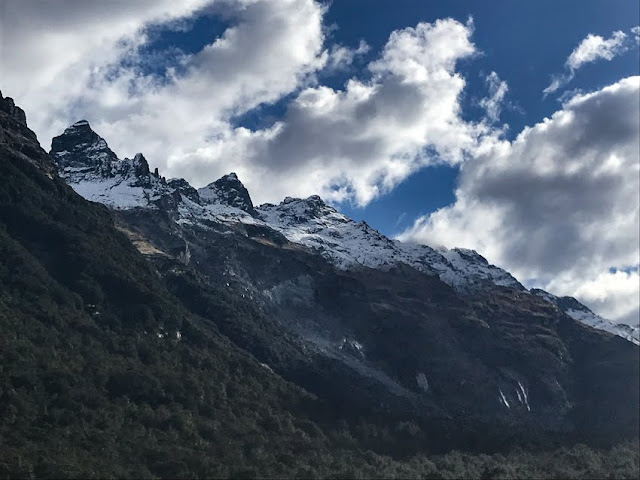 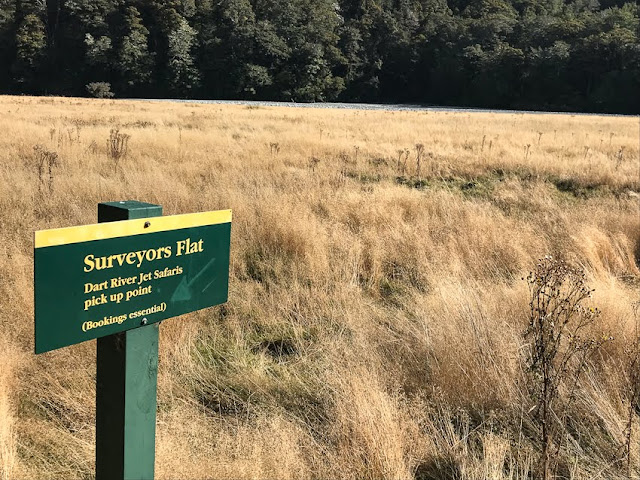 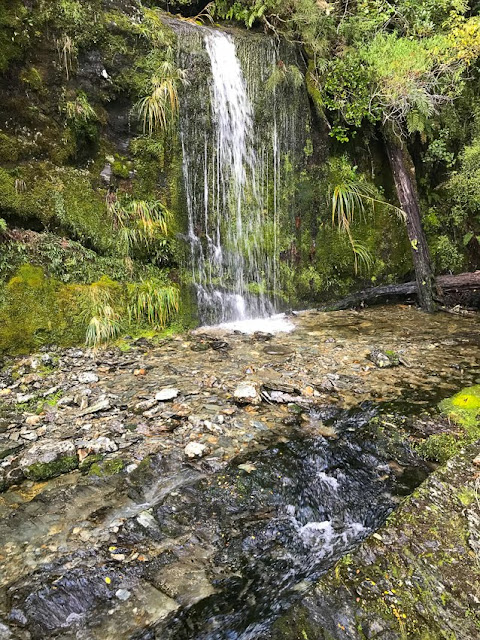 In 2014 a massive landslip dammed the river, creating a huge lake upstream of the slip and making the track impassable for a number of years. There is now a diversion up through some bluffs, requiring a bit of rock scrambling, yet allowing some great views out over the slip and the new lake, which is rapidly silting up from the melting glacier which feeds the Dart. 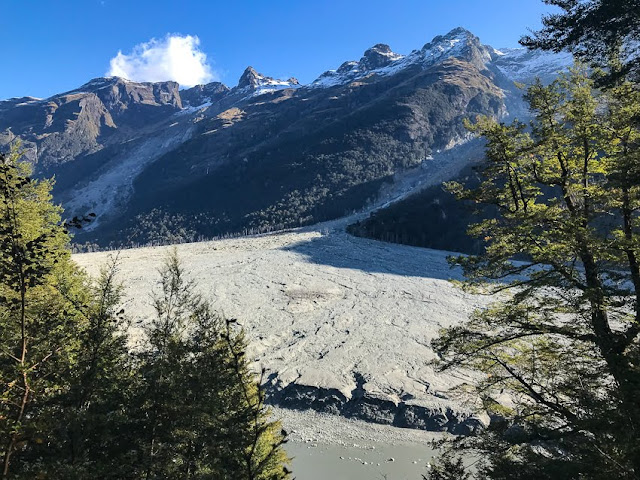 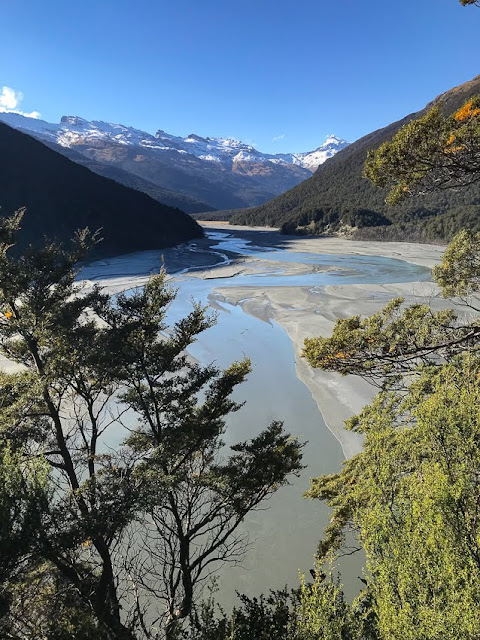 Above the lake the track returns to the river flats then cuts off a big river bend by heading straight through a beech forest on the flats. I can hear the river but can't see it, and at the end of the forest track I emerge back on the river at Daley's Flat. 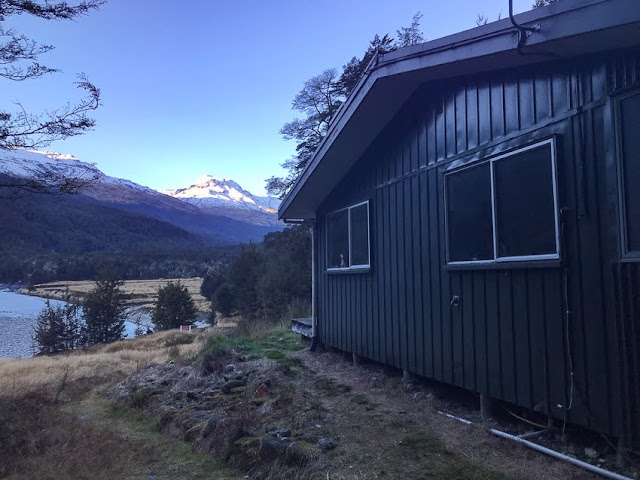 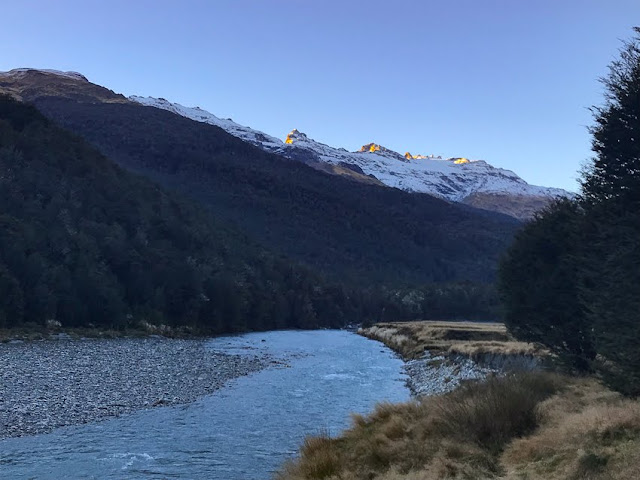 At Daley's Flat Hut I met a number of trampers coming down the Dart after walking up the Rees and over Rees Saddle, but I was the only crazy packrafter. The next morning they all left bright and early to catch their booked shuttles from the carpark whereas I had a leisurely start, waiting for the morning mist and chill to lift a little. 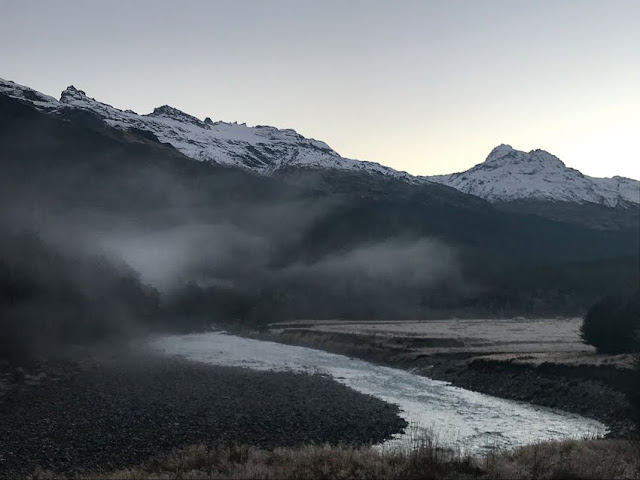 Since I wasn't quite sure what the river was like just below the hut as it went round a tight bend, and there seemed to be a bit of whitewater,  I took the safer option and walked back through the forest to Dredge Flat. There I inflated the raft and set out. 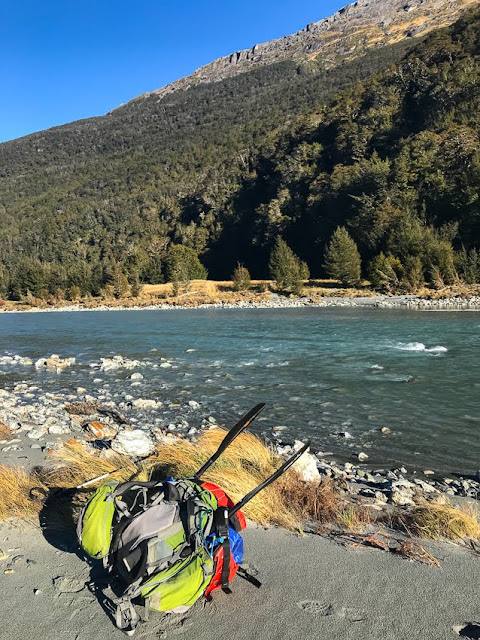 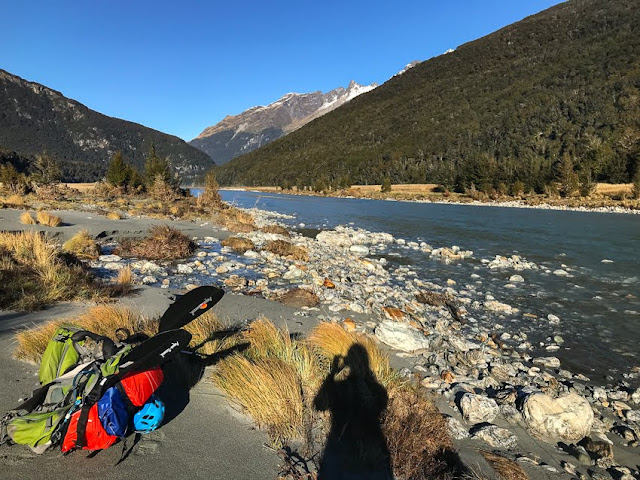 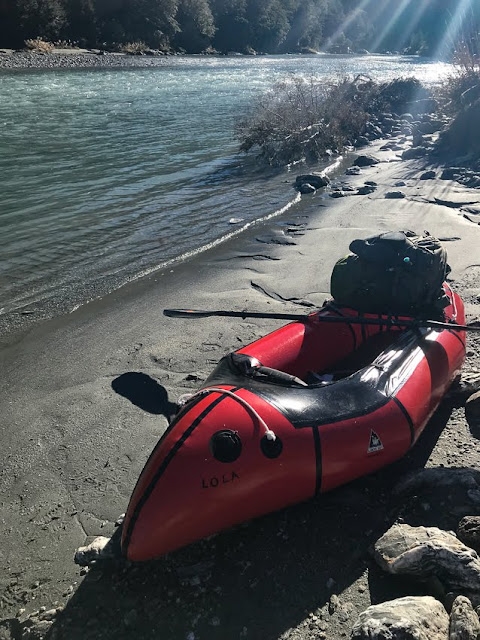 The first bit was through the flooded lake section, which was rapidly silting up from all the glacial melt coming downstream. It was more braided than lake now, so picking the right path through was important. I'd scoped a line the day before on my way upriver so I managed to float that section with only one small portage. Next was the outflow below the lake... 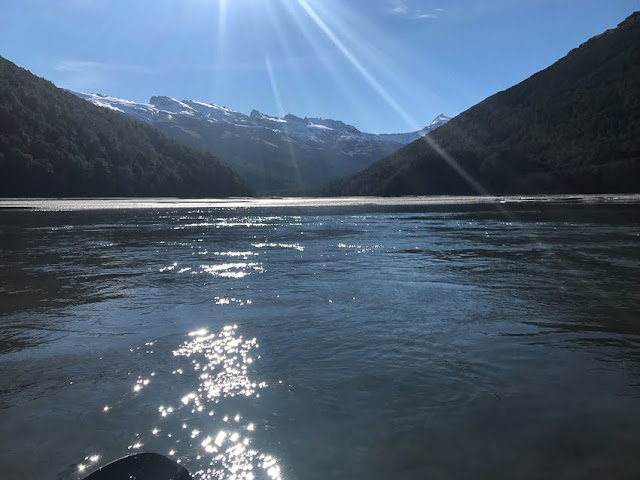 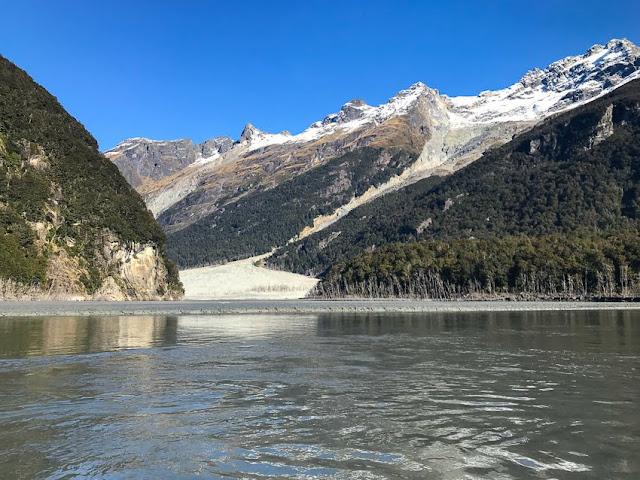 This was a straight run, with a pretty substantial wave train, and a clearly visible runout. I looked at it and figured I'd be able to float down it even if I fell out, so gave it a go. It scared the bejesus out of me, and by the time I got to the end of it my raft was full of water and I was floating in a bathtub! So I pulled in and upturned the raft to get rid of all the water. I made it, but it wasn't what I'd call fun.

There were a couple more Grade 2 rapids, but much shorter, and in one of them I hit a rock and flipped out of my raft. The water wasn't going all that fast so I grabbed my raft and paddle and swam in to the side to jump back in the raft. That's when I got caught in the quicksand!

The huge amount of silt that flows down this river means standing in the shallows isn't an option, so I lay back down in the water and pulled my feet out of the sticky mud, swam out into the sluggish flow and pulled myself back into my raft. Needless to say I was wearing a drysuit, with thermals underneath, so I wasn't the tiniest bit cold. 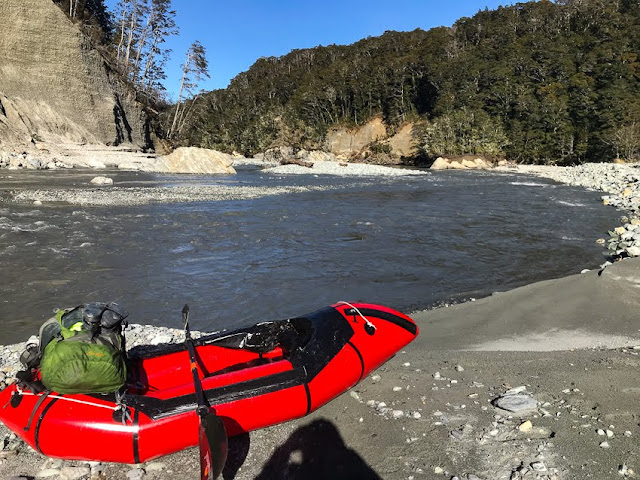 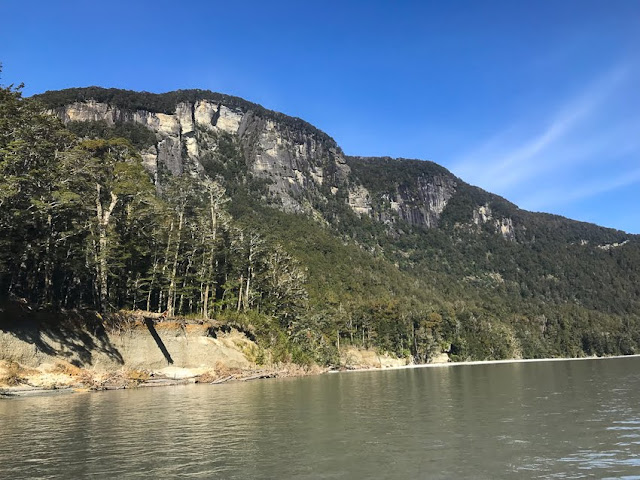 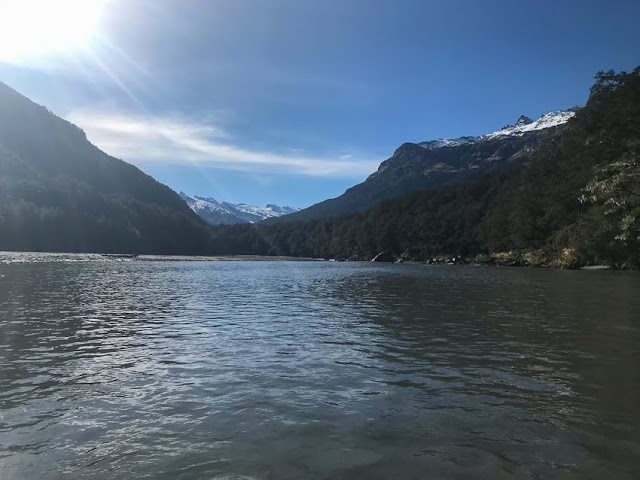 There were also a few sections that were either too shallow, or there were overhanging trees, called strainers, that I didn't want to go anywhere near, so I had to portage a few sections. But the final bit down to Chinaman's Bluff and the carpark was easy Grade 1. I even heard the commercial jet boats coming up the river and had time to pull in and watch them go by. 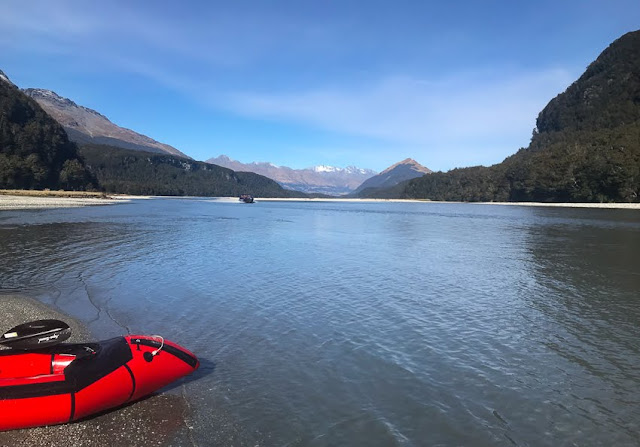 Back at the carpark I put everything out in the sun to dry and then headed down to Kinloch to stay at the lodge and have a soak in their hot tub. I decided that running high Grade 2 rivers by myself was pushing  my comfort levels just a bit too much. I carry my emergency beacon and a few survival essentials in dry bags in my PFD pockets, but I think I'd be happier running whitewater with another person. Time to start doing some networking on the packrafting websites... 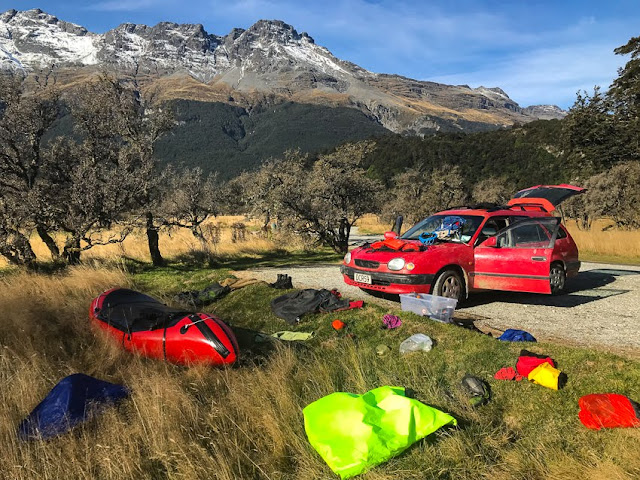 But in the meantime, off on another tramp.