Last year at Easter, I spent a few days volunteering with Permolat Southland at Deep Cove. We did some track cutting and installed some trap lines for the Deep Cove Outdoor Education Trust. Since then I've not been available for further volunteering, but recently I did find the time, this time to recut a track in Fiordland.

Lake Hauroko, in southern Fiordland, is known for the wicked winds that funnel down the lake. There's a tramping track down one side of it, that goes to a lakeside hut at Teal Bay, before crossing a 3 wire bridge at the lake outlet and heading west to another lake, Lake Poteriteri. This is a fairly remote part of Fiordland, and there are no further tracks once you reach the hut at Poteriteri, though there are certainly lots of off track routes to explore. As a result, these tracks don't get a lot of traffic, and with high rainfall the crown ferns soon take over, obliterating the route.

Permolat Southland were given the track between Teal Bay and Poteriteri to maintain, because DOC don't have the time, money, or inclination to clear it themselves. And since this is a route I plan to take with my packraft I was very glad to be able to help clear it. 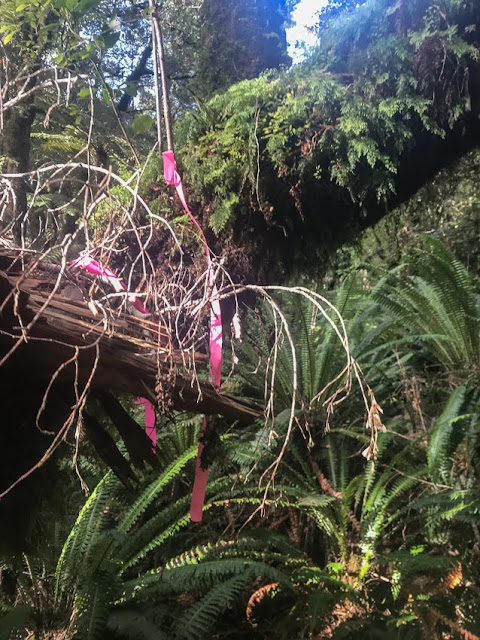 A week before we went in Les walked through over a couple of days and marked the route with pink tape. There are lots of orange triangles marking the track but the crown fern is so abundant and high that the markers are mostly obscured. 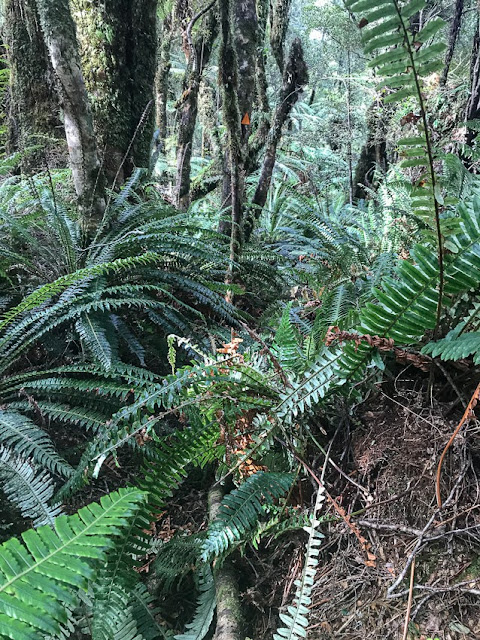 Day one for our team dawned overcast, but there was no wind on the lake and a very pretty rainbow. 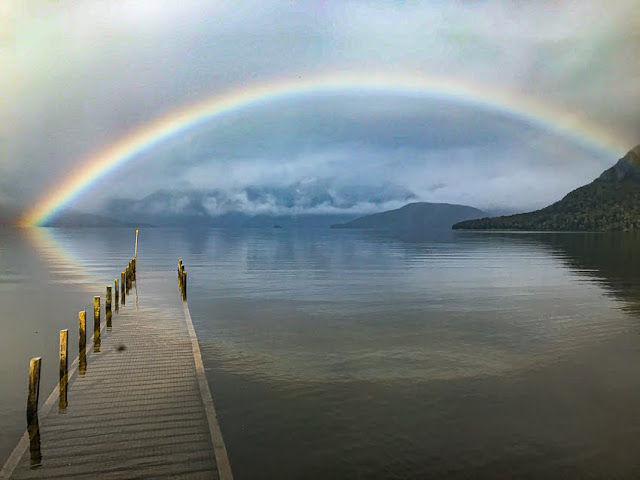 We met at the jetty at Lake Hauroko, loaded Joyce's boat, Namu, with gear and motored down to Teal Bay. There Alastair, John and I jumped out with our gear, and the boat continued down to the lake outlet to drop off two other members of the team, Les and Gavin, plus our full fuel cans so we didn't need to walk them in. Les and Gavin left the fuel at the bridge, and tramped in for a few hours, to camp beside one of the streams and begin cutting further west towards the hut. Our job was to cut from the Teal Bay end to their campsite. 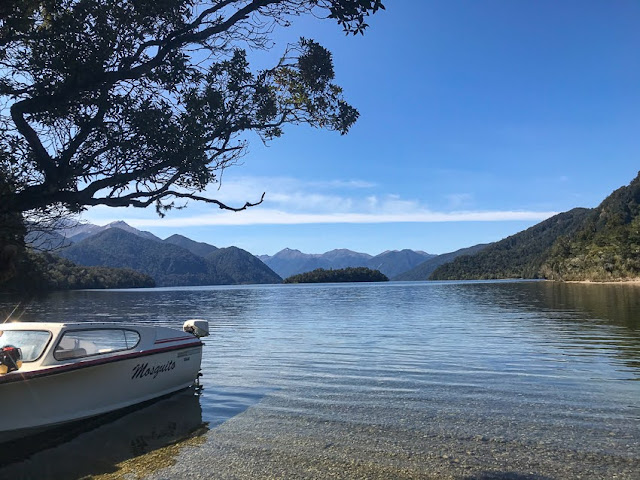 Each day we walked in, cutting and clearing the track until it was time to head back to Teal Bay Hut. We left our tools where we finished for the day, meaning the only thing we needed to walk in was more fuel. Each day the tramp in and out got longer, but luckily for us Ross turned up on Day 2 with his boat which meant we could dispense with the 40 minutes each way tramp to the outlet, and avoid crossing the three wire bridge over the Wairaurahiri as well. There was still the Rata Burn 3 wire to cross each day.... 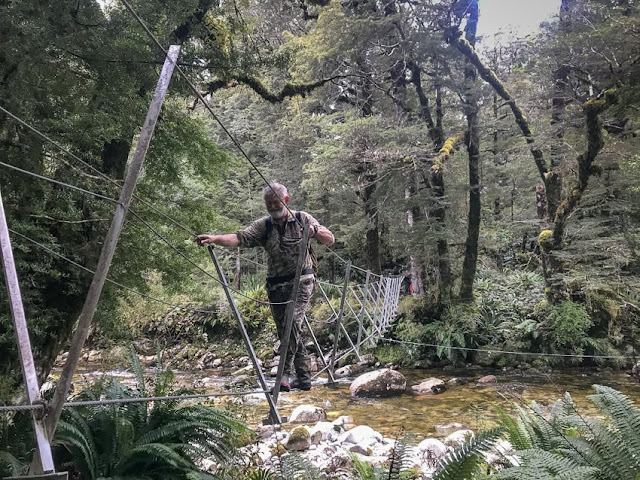 It was frigging hard work. Whilst the others wielded power tools, I cut and slashed and picked up all the cut ferns so you could actually see a track. My back was really feeling it after two days, but I spent some time stretching back at the hut and the next few days had no further issues.

By lunchtime on Day 4 we had cleared all the way to the next big creek after the Rata Burn. As we were eating lunch I noticed a newly marked track (I'd walked down to the stream the day before to get water and the track and pink ribbon markers hadn't been there then) so I followed the track to a different  crossing spot on the stream and could see the tents of Gavin and Les. We had done it! 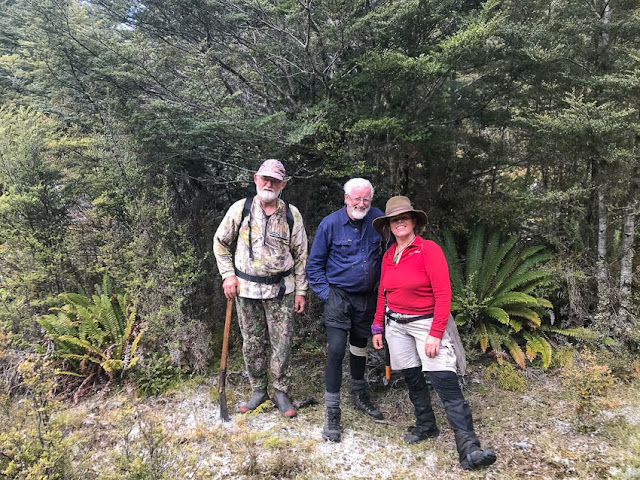 After lunch and tidying up the final piece of track to the stream crossing, we carried our tools back to the boat. That took a good 3 hours as we were pretty tired by then. But it was a great feeling of achievement to know we had done what we had set out to do, particularly as there had been less volunteers than Alastair had hoped. 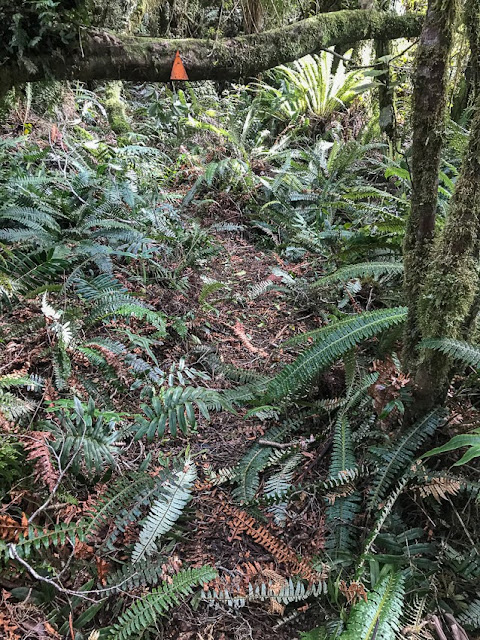 The final day we just lazed around waiting for our 4 o'clock boat pickup. Les and Gavin turned up around lunchtime, looking as exhausted as we felt. They too had finished cutting through to the flats before the hut, although with less people in their crew had not cleared the vegetation away as much as we had.

At last the boat arrived and we all clambered onboard, including a solo kayaker who had paddled down to Teal Bay the day before, knowing full well that the wind was picking up after a week of settled weather, making a paddle back impossible. I was awed by her nonchalant attitude, just expecting that someone would give her a ride back. Of course we did. No way do I have that sort of self assurance!

There was bad weather brewing, and I was exhausted. So I drove back to Wanaka to rest up for a few days and plan my next adventure.