Off to the Dog Box

Since I joined Hutbagger, I have been just a little obsessed with visiting backcountry huts. My flatmate belongs to the local tramping club, and I have attended a few meetings myself, including giving a talk to them about The Bibbulmun Track. So when I noticed they were planning a trip up the Eyre Creek to visit an old musterers hut I decided to join them.

The trip was led by Mike. A friend of his had passed last year, and the Eyre Creek valley was a favourite fishing ground. A keen angler himself, Mike planned to take some of his friend’s fishing tackle, and a specially made scarf memento, up to Dog Box Bivy in the upper reaches to leave as a lasting memorial to his friend. The rest of us just fancied an easy tramp up a river valley and back. 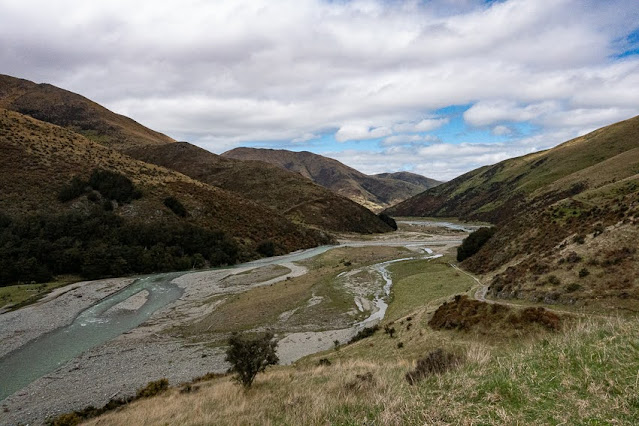 We drove down to Eyre Creek in the morning, stopping in at Athol for morning tea and to pick up a memorial scarf from Mike's departed friend's crib. Then off up a farm road with a stop at the farm house to pick up the code for the locked gate, then on up the track to a spot where we could park the cars. There is a 4WD track all the way to the first hut which crosses the river a few times but is pretty washed out in sections. Besides, we had come to tramp!

Packs on, we stayed on the true right the whole way up to Shepherds Creek Hut. The river was flowing fairly high and fast, and was still discoloured after recent heavy rain so we weren't keen to cross it unless we had to. We followed tracks most of the way, except where the river had cut in and washed the track away. Then we climbed higher and bush bashed our way over a few bluffs back to the track. 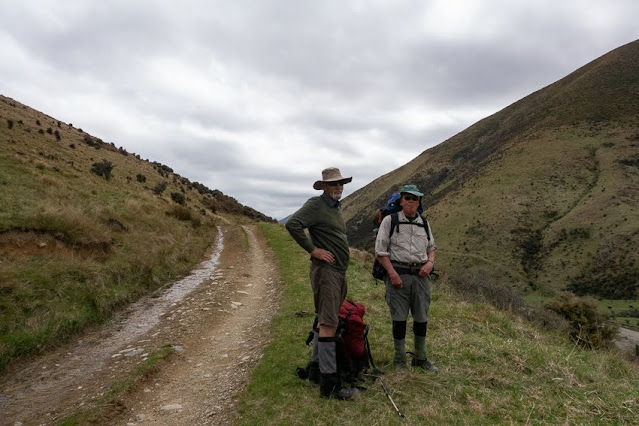 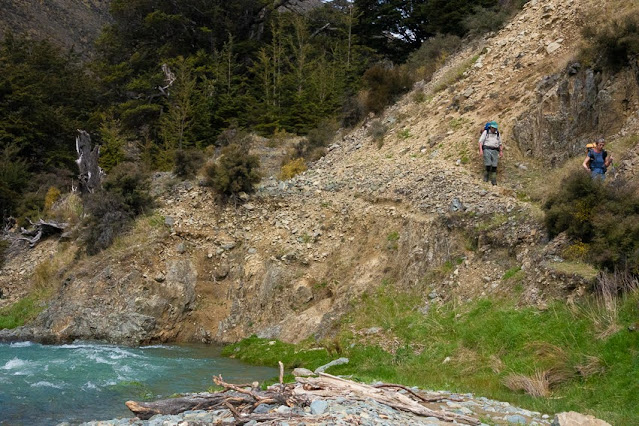 About halfway we encountered a large colony of black billed gulls nesting on the river shingle. Seeing these critically endangered birds was another reason for this trip. They weren't too happy about us approaching their nesting colony and sent out a warning party of screeching circling birds. It felt just a little Hitchcockian!

We kept our distance and stopped a little north of the colony for lunch, before finishing the rest of the 11km walk to Shepherd Creek Hut, a two roomed six bunker with an efficient firebox. There was lots of dry driftwood around from previous flood events, it even looked like the hut might have had some water through it from the dustiness of the floors. 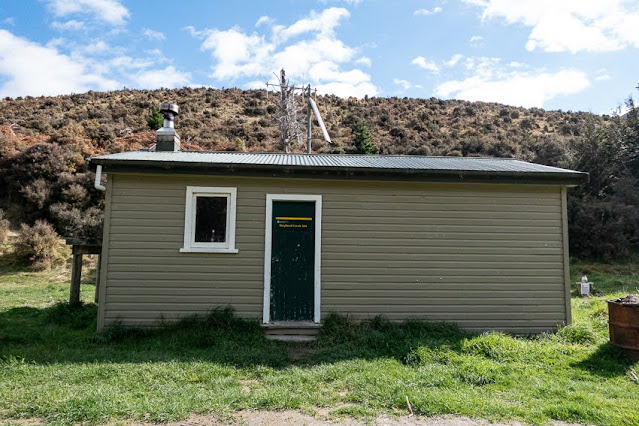 The hut doesn't get a lot of visitors, and most of them seem to be foul mouthed 4WD enthusiasts from the calibre of the hut book entries. The farmer told us he had only just begun locking the entry gate after finding people had been vandalising the hut, punching holes in the walls and ceiling. What is wrong with people?

We stayed two nights at Shepherd Creek Hut, which meant the next day was a leisurely amble further up the valley to Dog Box Bivy, an old musterers' hut on a high terrace above the creek. We had to cross the creek to get there so we used the ford just in front of the hut, although there were a few more crossings, some thigh deep, to get there. We coupled up for the crossings for added safety. Although the water had dropped further overnight it was still flowing quite quickly and care was required. 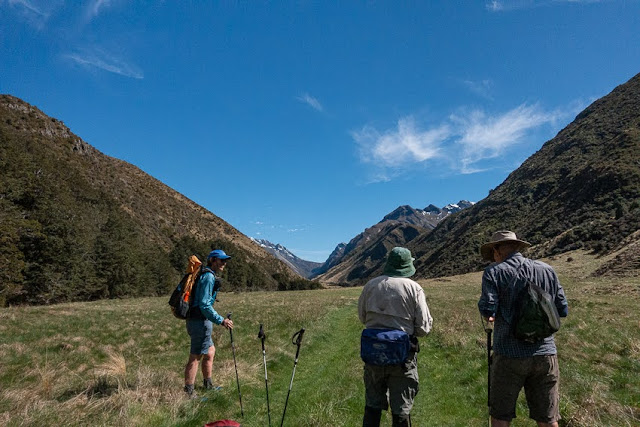 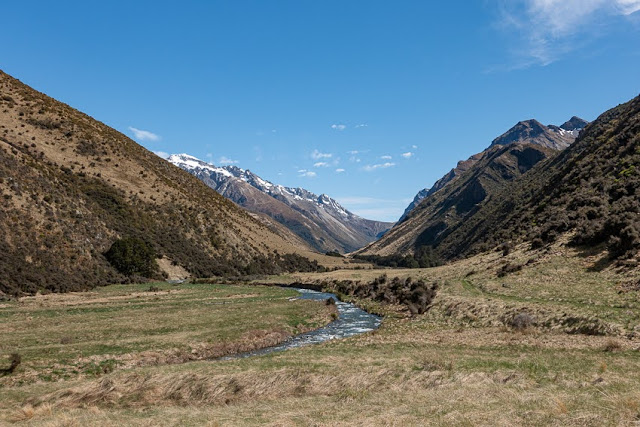 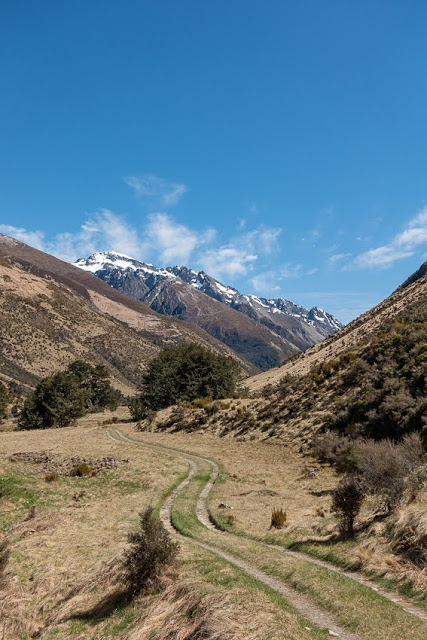 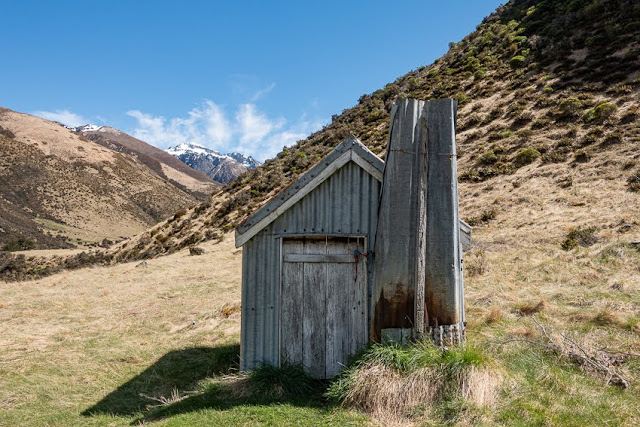 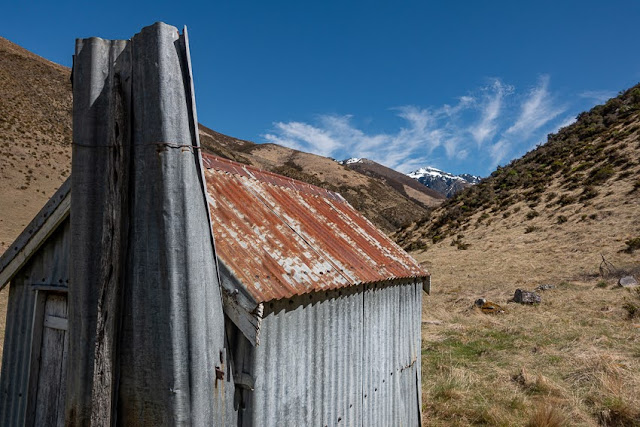 In days of old the cattle were mustered up the Mataura and then over into Eyre Creek. This tiny bivy was used for shelter for many years, and the mustering teams wrote their names on the chimney iron. Because they used graphite pencils, it reacted with the tin leaving a permanent memento. 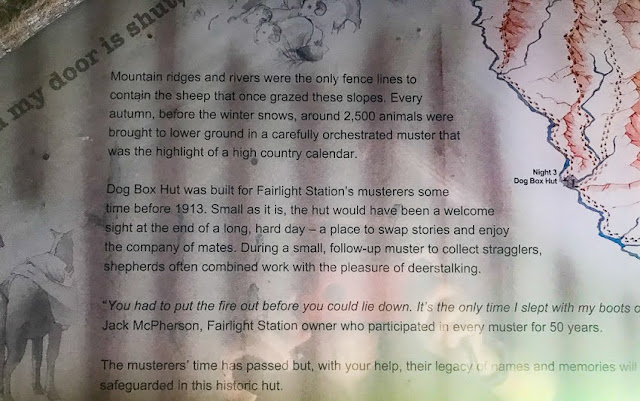 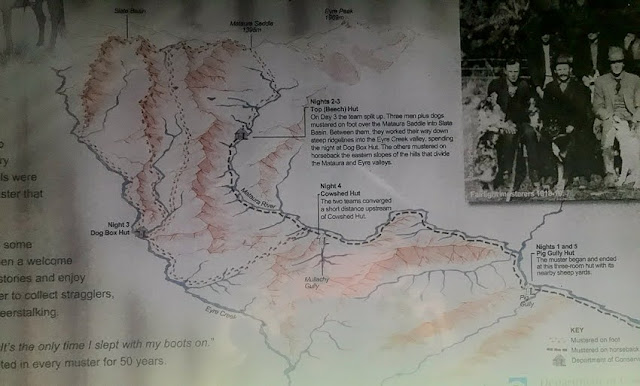 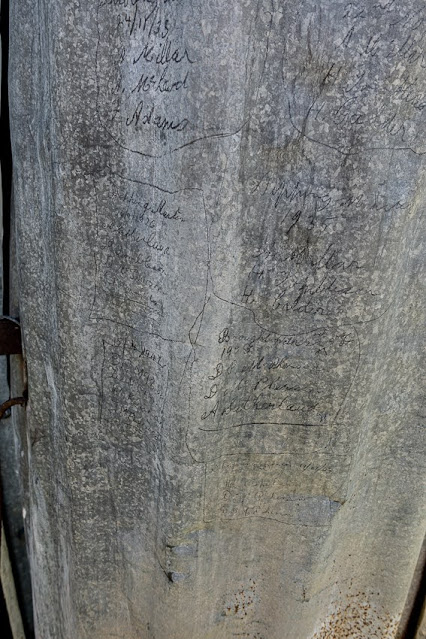 Mike found a place in the bivy to place the tackle box and scarf he had brought up to remember his friend Mauri by, and we had lunch before venturing a little further up the valley. Jane Peak, the tallest in the Eyre Mountains, graces the end of the valley, but the usual route to its summit is from the Oreti River on the northwestern side. 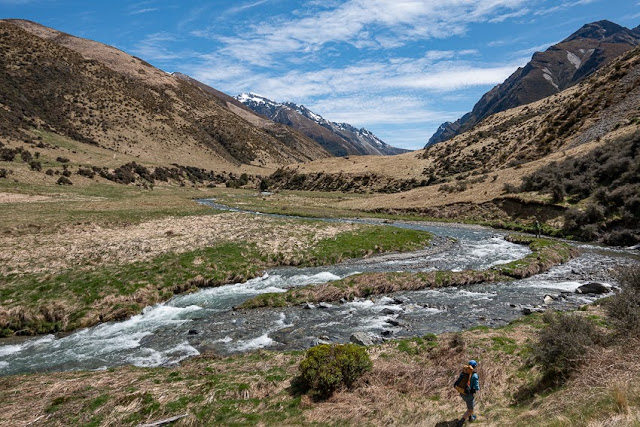 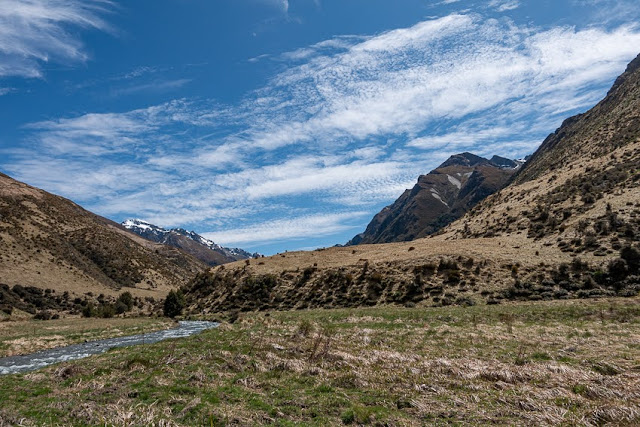 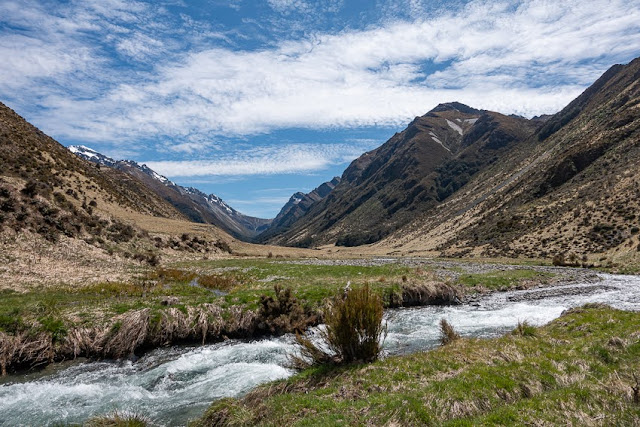 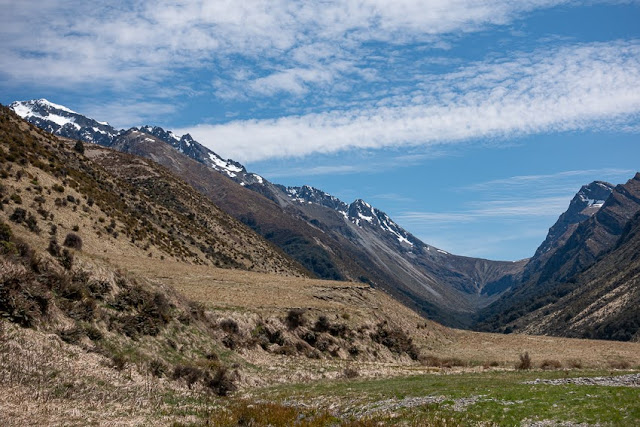 Back at the hut Rod and Mike collected firewood, and Jan swept out the hut a second time. Both days were quite short so there was lots of time to doze and read a book, or chat. Jan and I discussed lightweight tramping gear choices, trying to convince Mike to dispense with his heavy 3kg pack and buy something lighter that will keep him tramping longer. Rod and I discussed cameras, and the tradeoff between a smaller camera for tramping vs image quality. As technology improves, a cheap point and shoot camera no longer takes a better image than the camera on a smartphone. My iPhone is also in a waterproof case, so it's my go to for packrafting missions. My Sony RX100 takes superb photos with its 1 inch sensor, and is considered the best compact camera in its class, but it's also super expensive. Last year I spent quite a bit of money on repairs, but disappointingly, it's playing up again. Perhaps it's time to buy a new camera, maybe the latest iteration in the RX100 series, which has a much better zoom, but isn't as good in low light. Let's hope my current camera keeps working a little longer.... 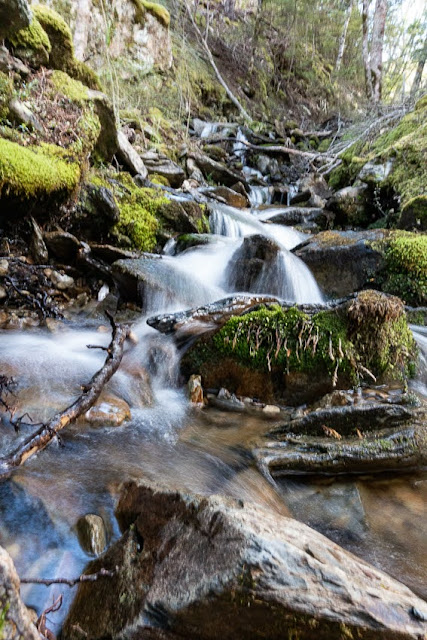 The final day we walked back to the cars, although with the water being lower we avoided the bush bashing and crossed the creek a few times instead. We popped in to have a look inside Mauri's crib at Athol with its collection of old Chinese ceramic pots and pictures of his family (very impressive handlebar moustaches) and enjoyed a coffee at The Bomb at Garston on the way back to Wanaka.

Two more huts bagged! Although I later discovered there's another small private hut hidden up the valley that we must have passed close to. Damn!!