Up in the clouds

After a wonderful few days up the Cobb Valley, and a yummy cooked breakfast in Motueka I continued driving south, not really sure where to go. I had thought about heading in to walk a circuit around and over Mt Arthur in the east of Kahurangi National Park, but with the crazy silly season traffic I knew that would be pretty popular with the holiday trampers too. Plus the nearby commercial campsites were all full, and after six nights out bush I was keen to have a shower, and wash my hair...

I ended up in Murchison, staying at the Riverside Holiday Park, a place I've stayed at a few times now, as it's cheap and has great facilities and the owners are awesome. It wasn't that busy, so I booked a cabin for a few nights, and waited out a rainy spell. A chance for some life admin, laundry, and catching up on a few blog posts.

There was some great weather forecast for the New Year, so I planned to walk in to the southern end of Kahurangi and explore the 1000 Acre plateau, a trip I had planned to do on a previous stay at Murchison, but that time the weather didn't play ball. This time it was looking perfect for some tops travel, so I packed all my gear, including tent, for a four day mission. It's a full day in to Larrikin Creek, and from there there are lots of options for exploration. I wanted to give myself time to explore, given the weather forecast was so favourable.

I headed out to the trailhead up the Matiri river. The road was good until the last couple of kilometres when it got a bit pothole ridden, but nothing a normal car couldn't deal with. The carpark is in a different spot to where it was when I went to Matiri Hut a few years ago, as in the interim there has been a hydro scheme installed on the river, so the track is apparently quite good all the way now. But I can't confirm that, because the carpark was full, with 10 cars already parked up. I did the math on potential numbers that might be camped up at Larrikin Creek and decided I wasn't feeling that social, so drove back down the gravel road to Murchison, and had a late breakfast in one of the cafes.

I had a plan B, another trip I'd had on my radar but again had been thwarted by fickle west coast weather. Again the weather forecast was grand, so back in the car for another hour or two down the Buller towards Westport.

The turnoff to the Buckland Peaks track is just before you merge with the main north-south west coast highway. It's about a kilometre off the highway with a nice grassy carpark, with only two cars parked there. Big sigh of relief. I dump the extra days' worth of food rations and set off.

The first hour of the walk is through private property, following roads between grazed meadows before dropping into swampy ground which only supports Manuka. There are quite a few beehives around to take advantage of the abundance of flowering shrubs. 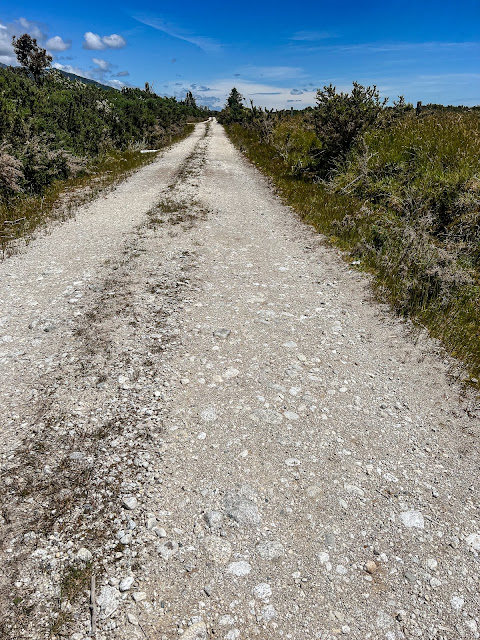 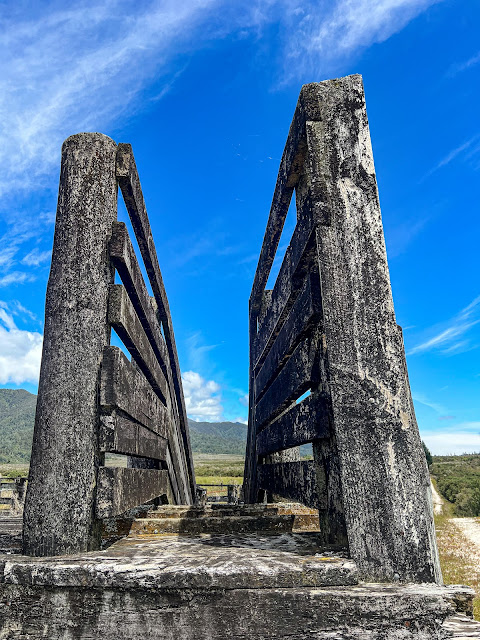 Once the farmland is done, the track enters conservation land and begins climbing. It's grand to at last be out of the sun and under a tree canopy, but it's a ridge climb the whole way, and fairly grunty.

Initially it's more Manuka and quite open, and I spy a few sun orchids alongside the track. This time they are open so I get some photos. 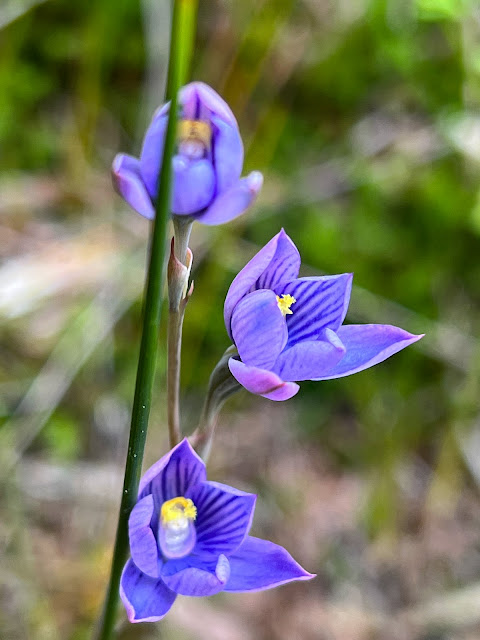 As I ascend further the humidity of the coastal swamps recedes and it's much more pleasant for tramping, but it's a ridge climb, and there are no water sources at all along the entire track. I had brought a bit over a litre with me, behaving like a Kiwi rather than an Ozzie! The latter would have filled her water bladder with a full 2.5 litres before setting off, the former knows there's always a stream or waterfall around the next corner!  I am getting slack, particularly as I knew from my research that there was no water, and I'd had a chance to fill up at the base of the climb. 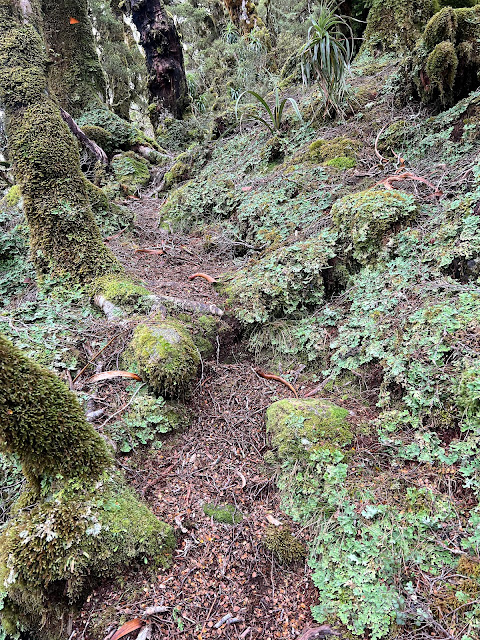 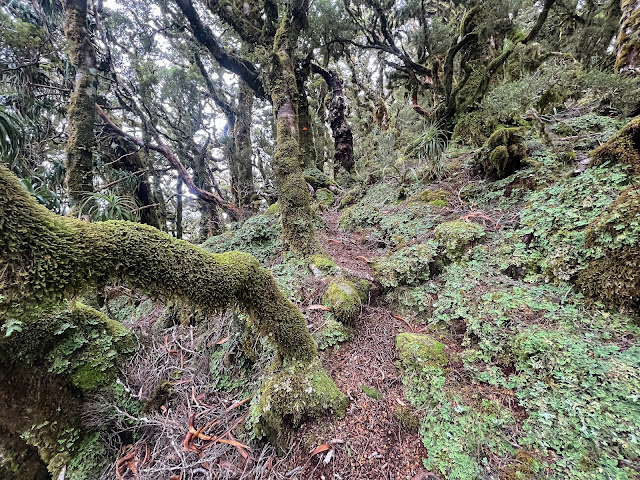 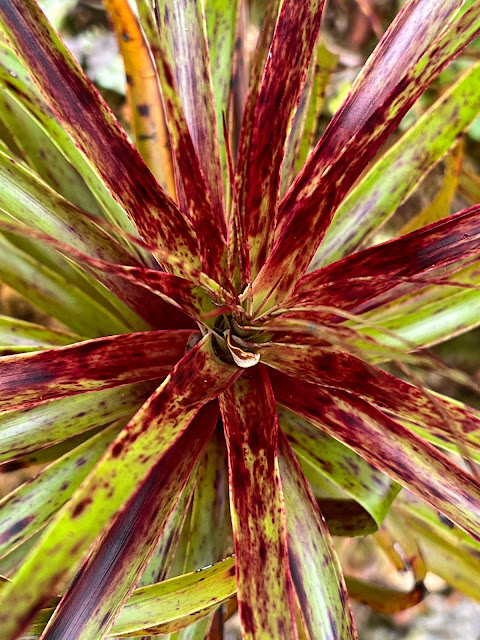 The forest was beautiful, though there are few views until you at last reach the treeline, which takes about 3 hours. 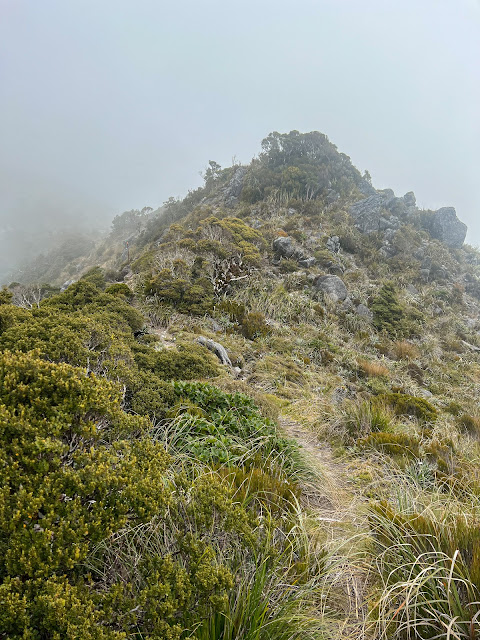 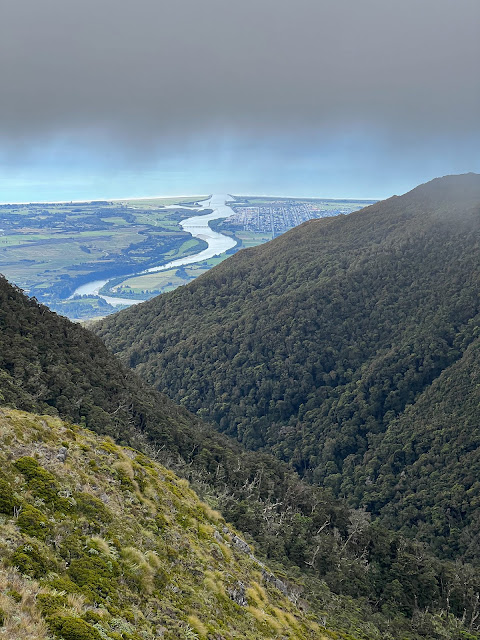 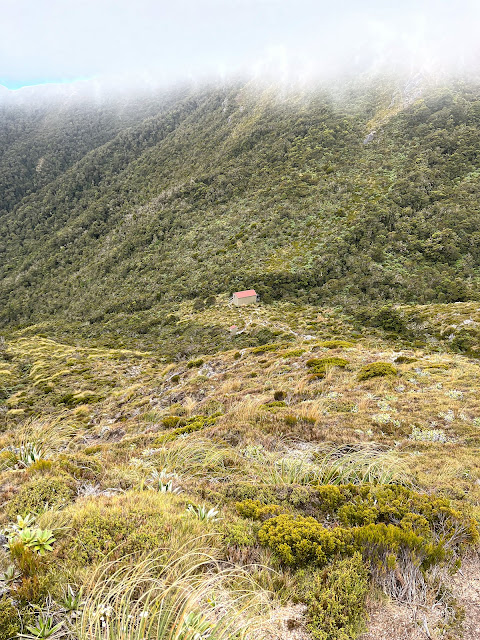 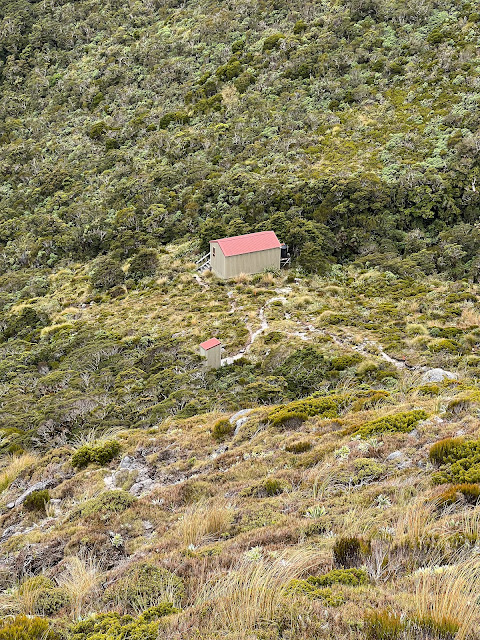 Up ahead the clouds were coming and going over the peaks, so when I got to the basin where the hut was nestled I decided to descend to it and stay the night there. Since I'd left at lunchtime I hadn't given myself enough time to get up higher to a campsite before the notorious west coast fog came in. I also wasn't sure how much water would be up there in the tarns, as I was out of water by the time I reached the hut.

Inside the hut were a couple from Hanmer Springs staying a second night, recovering from a full on family Christmas. I'd met two of their kids walking out after spending one night at the hut, they had New Year revelling to attend! Neither kids nor parents had been up onto the tops to explore.

It was a pleasant night in the hut but next morning I set off early back up to the ridge where I dropped my main pack and just took a small daypack with me to spend a couple of hours on the tops. There's a fairly narrow ridge that you need to get across to get up onto the peaks, which is well marked and cairned, but still I missed the track at one spot and did a little unnecessary rock scrambling. And that was in fine weather!! 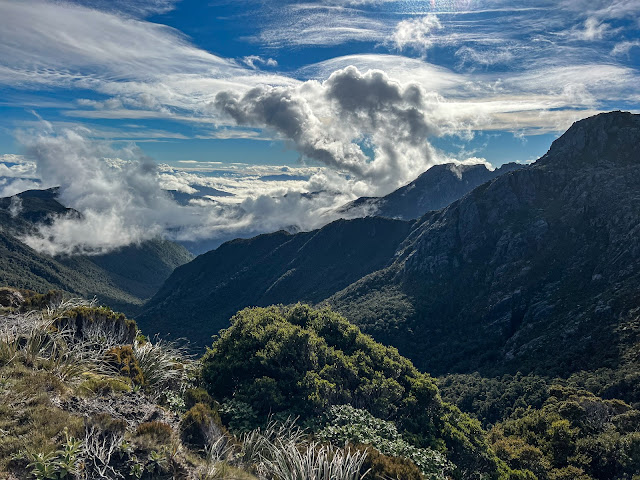 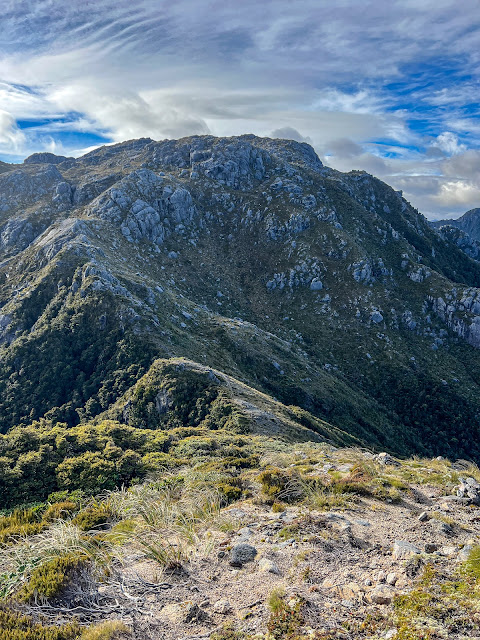 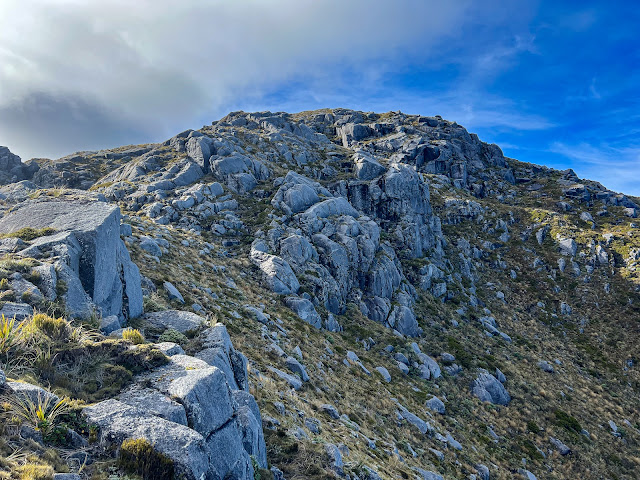 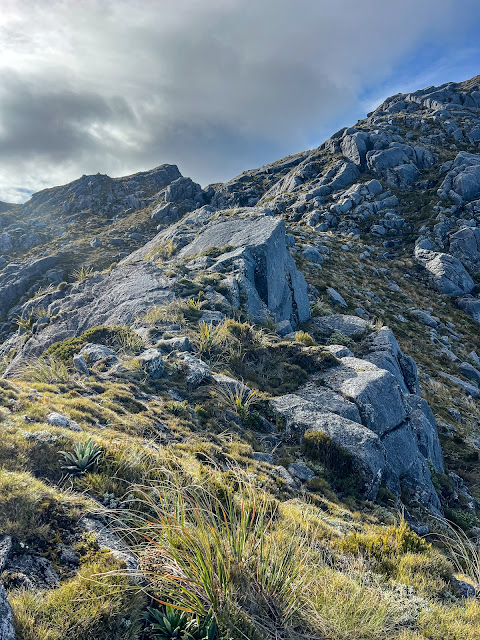 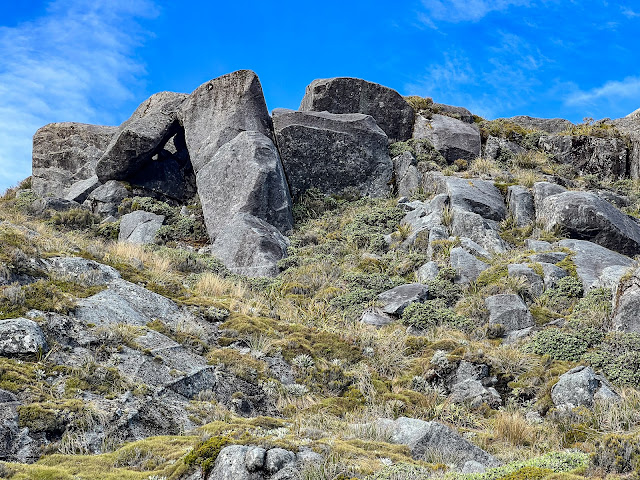 Once up on the tops I was surrounded by polished marble rocks and tors, with a few tarns between. Very surreal and barren, yet beautiful. Also extremely disorienting should the cloud come in. Which it didn't whilst I was up there, just an icy wind that made me rue leaving the overtrousers below and only taking my jacket. 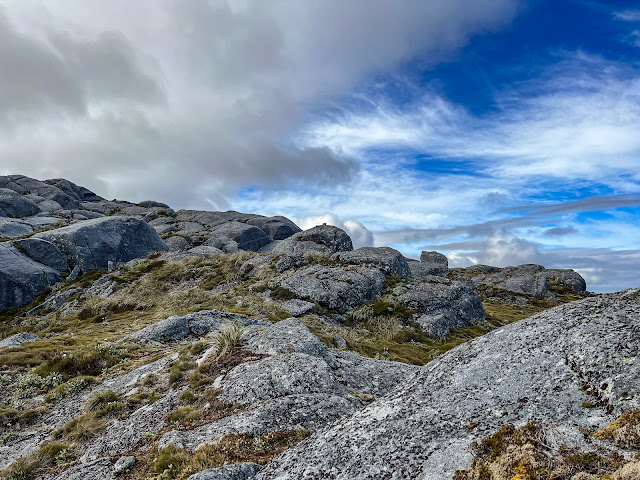 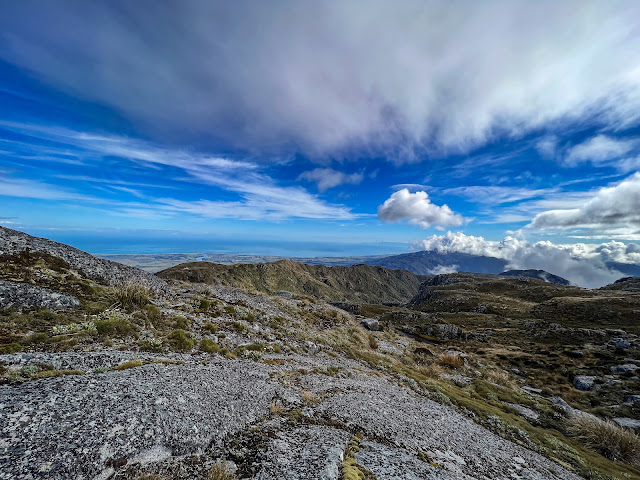 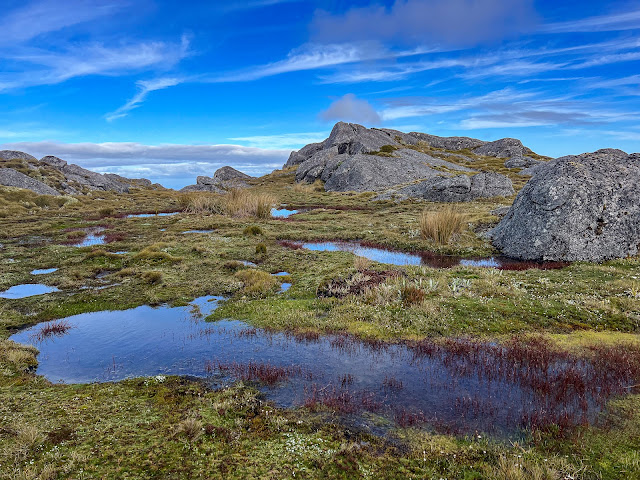 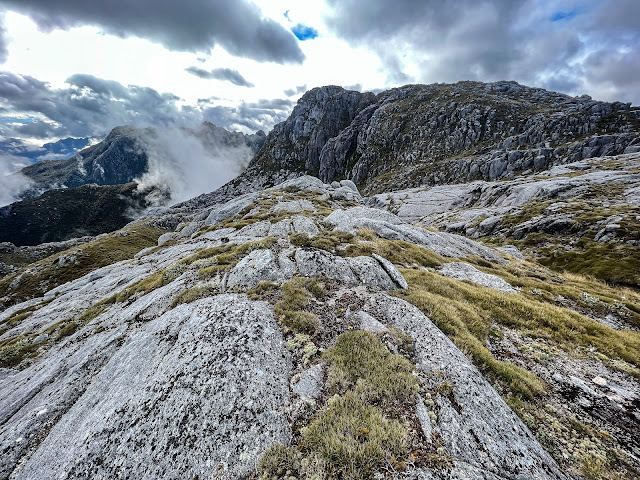 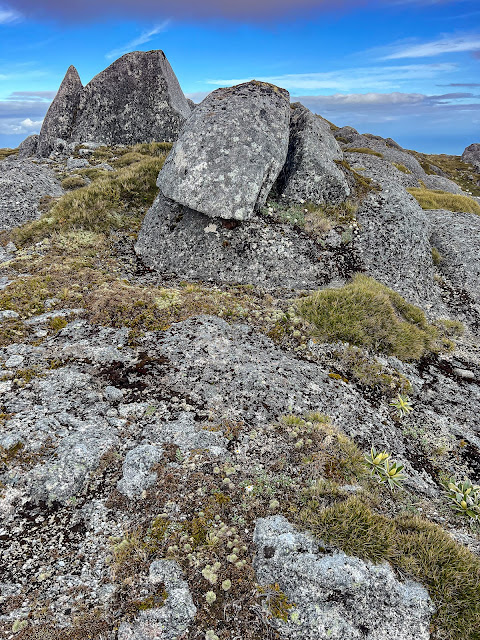 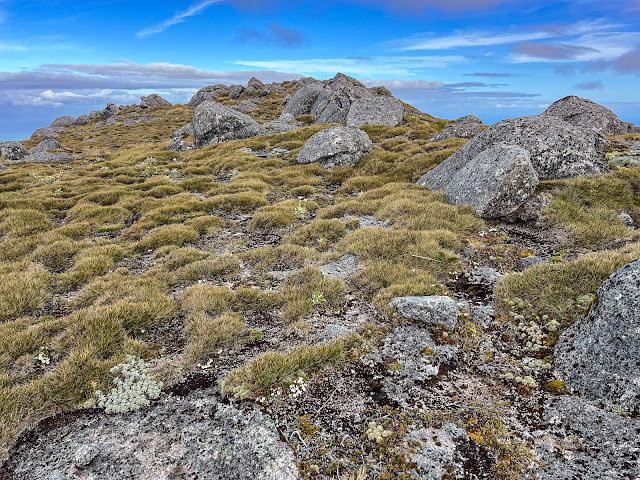 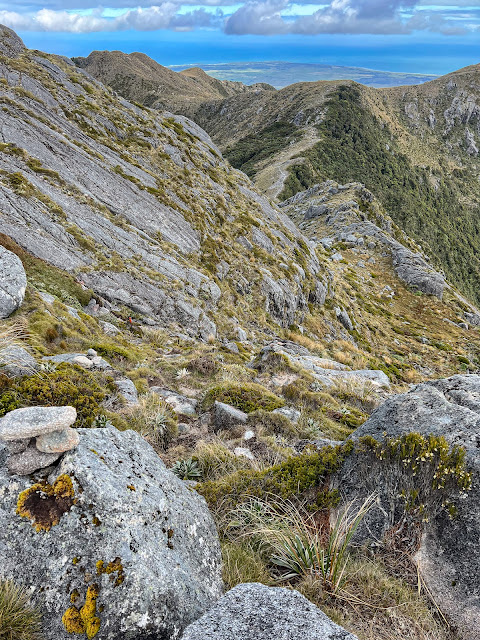 I wished I'd brought an extra day's food, as I would have happily found a camp site up there and explored further, but instead I returned to my bag and made the long descent back to the farm road.  I met a lovely Westport couple on their way up to spend a couple of days on the tops and I experienced a tinge of jealousy, but had a really good chat to them about routes in the area as they had lots of local knowledge to share. More food for thought... 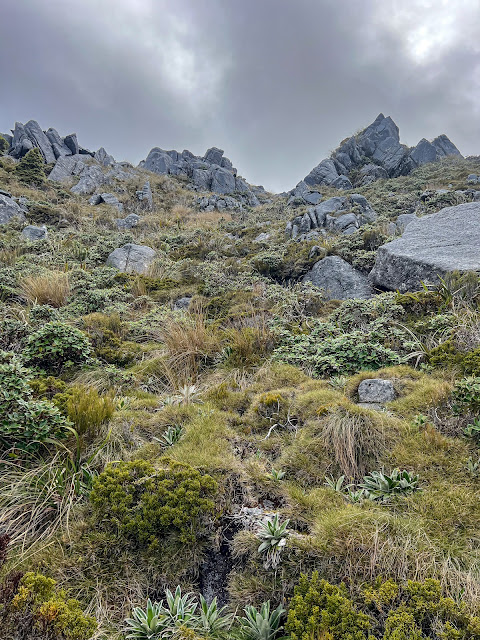 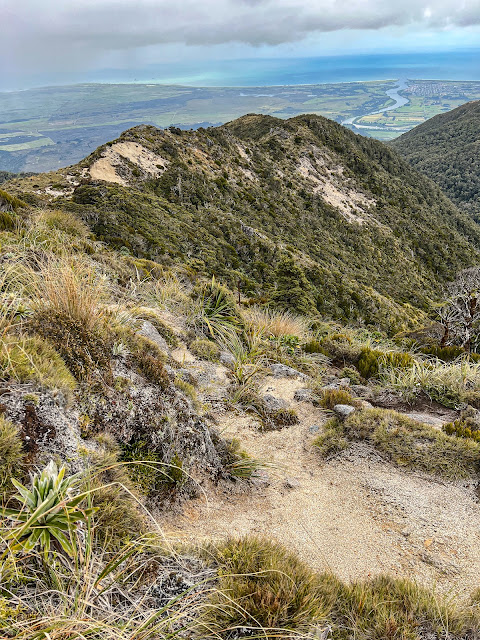 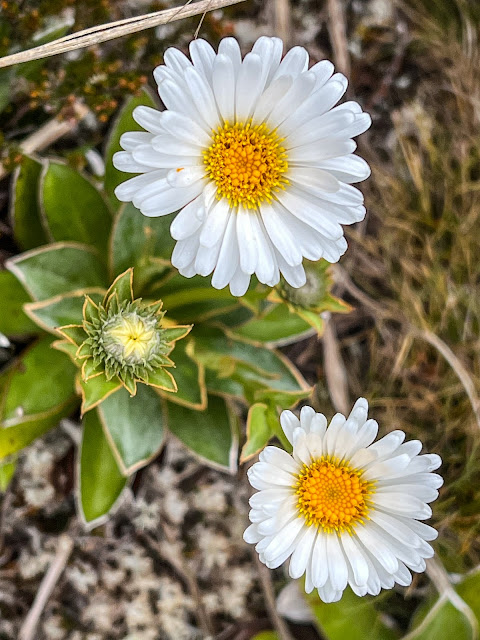 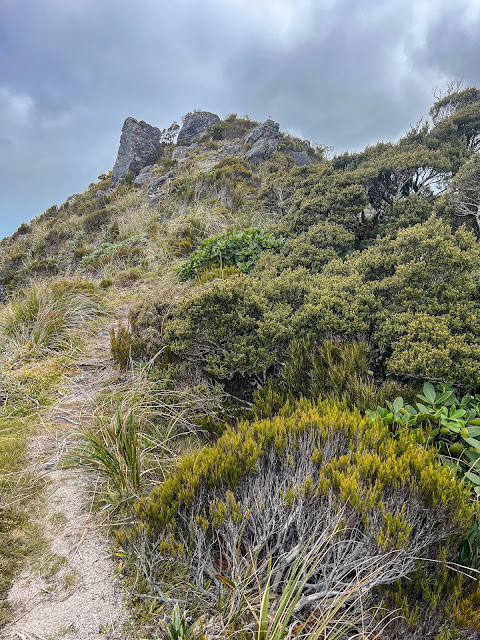 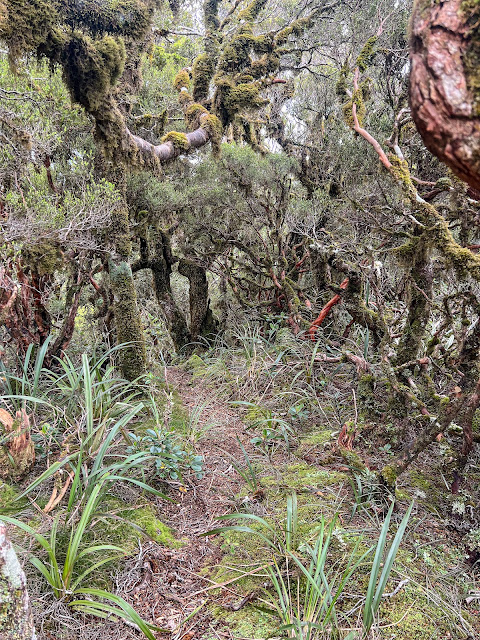 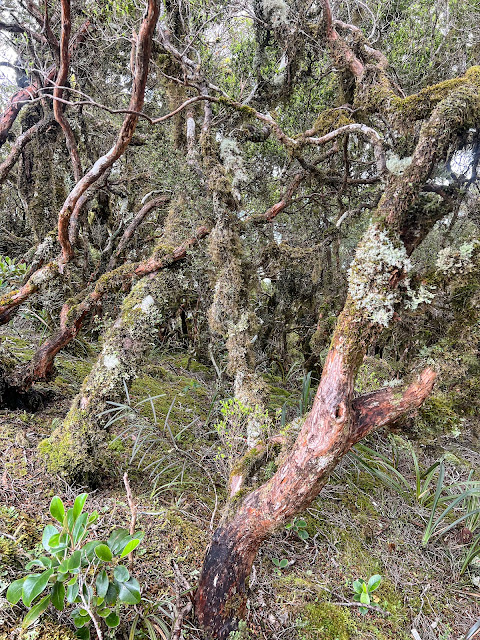 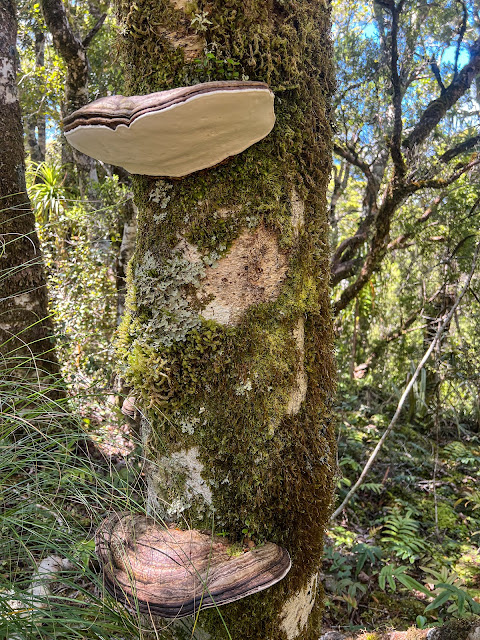 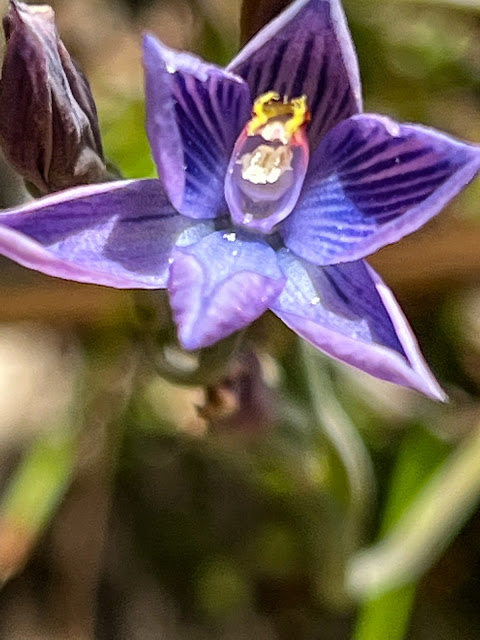 This time I had brought a bit more water, but the walk back through the swampy Manuka was hot and exhausting. I was glad to sit in the shade at the carpark for a while and shed my shoes and relax, before heading off south towards Punakaiki. I found a cheap campsite for the night, and was in bed by 7pm. No New Year's revelling for me!!