My constant companion, literally. She's travelled all over Australia with me, taken single engine plane rides out to remote Aboriginal communities with me, been canoeing in Kimberley gorges, out on the boat scuba diving, and to the beach windsurfing. She doesn't like the scuba diving, she starts howling the moment I disappear under water. I suspect she's not too keen on the windsurfing either, but she's learnt to live with it. She just curls up in a ball next to my shoes (which she buries for some reason I haven't yet worked out) and waits, or she finds someone else on the beach to sit with. Most visiting windsurfers from Europe know me as Hazel's mum, some of them have known Hazel for at least 2 seasons before they've actually met me. She's a real hit with the Euros, must be those eyes and the way she sits looking at them while they eat their sandwiches, they just can't help themselves giving her a tidbit. I know what's going through her head: "Another sucker, this is child's play". After windsurfing days her food bowl doesn't get filled quite as high. 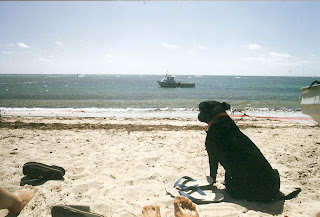 She has a camping trick too, of disappearing around breakfast time. Later I meet other campers who ask me if it was OK that they gave her some of their breakfast, she was sitting there so nice and gentle. Sometimes 5-6 people in a day tell me this. She is sneaky! Her sneakiest camping moment was when she was a wee pup. I was talking to friends over a beer when she put her paws up on their camp table and grabbed some pork chops which were thawing prior to cooking. Huge shout from Keith saw her drop them and run off. Yelling and bellowing from Keith along the lines of being sent off to the knackers meant she kept away for 2 hours, slinking back under the cover of darkness to lie quietly at my feet. The pork chops weren't harmed and were washed and cooked up as if nothing had happened. She has never attempted a move like that since. Thanks Keith for teaching her that lesson.
Hazel also comes out with me on my work trips. She's actually a good way to create a relationship with both the kids and the adults out on the communities. Many white people teach their dogs to be aggressive towards aboriginal people, and many dogs in aboriginal communites are barely domesticated, so especially the kids really enjoy that interaction with a friendly dog. If Hazel doesn't come out on a trip (often I don't take her in the summer when the temperatures are high 40s and the flies in their millions) many of my patients ask after her welfare. She's kind of one of the team.
Hazel loves the beach, running around, jumping in the water, rolling in the sand and seaweed, chasing the insects, digging for crabs. And sliding down sanddunes after she's raced up them. But Hazel's favourite thing to do is just hang out with me, or other humans if I'm not around. She loves having visitors, gets all excited, and will play for ages with kids. Especially if they are swimming, she'll go and join them. Doesn't understand swimming pools though, so no chance she'll jump in one of them and clog up the filter.

Hazel loves kids, in fact she thinks they are lollypops. Feet and faces are her favourite parts, particularly slipping the tongue in! I've tried to stop the tongue thing, but she's mighty quick - phlaaaw!! 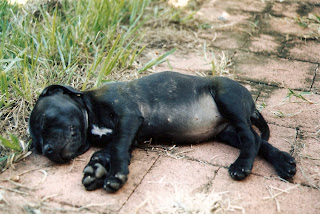 Hazel was born in Humptydoo, near Darwin in the Northern Territory. She threw up on the way home, and has enjoyed vomit-free car travel ever since. Preferred position is curled up on passenger seat with her head in my lap. Sometimes I wish she could share some of the driving. Tropical living meant she got used to thunder and lightning at a very young age so it's never bothered her. She also doesn't mind fireworks, in fact she once stood on an upturned tinny at Kalbarri looking over the shoulder of some complete stranger, completely entranced by the Oz day show. You can imagine his surprise to have old smelly breath's head resting on his shoulder!!

She's getting old now, going grey around the muzzle and feet, and getting grumpy with young dogs. She has a bit of arthritis which causes her problems now and then, but otherwise she's in great shape. She sure is enjoying those extra walks! 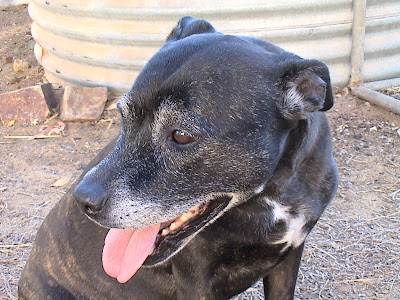 The only thing I'll be missing on my trip is Hazel's company, and I know I'll be getting a thorough talking to when I return. In fact she'll probably have a full on sulk. She'll get over it!