Think Bali and immediately you picture vistas of terraced rice paddies, achingly green, with a cloud shrouded volcanic peak in the background. Well I do anyway, having studiously avoided the whole tacky beach and party scene of Kuta/Legian altogether. My first trip in 2005 I'd spent a few days in Ubud, going for walks in the nearby countryside, but the extreme humidity - yes it was actually hotter up there than on the coast - had sapped my energy too much to really do some decent exploration. So this time I was determined to get out and about.

Day 2 in Candi Dasa I hired a car and driver and visited most of the nearby sites: Ujung Palace, Tirrta Gangga, Pura Besakir and also a fantastic lookout with views down to the coast and across to Lombok. I'd stopped many times for photo ops but it's never really the same as using the pegs and getting properly out into the countryside along paths used by the local farmers to get to their fields.

So there I was back in Candi Dasa a little after noon, looking for a restaurant for lunch, when I chanced upon Putra.

Putra had brought his kids down to the beach for a break after school. His wife had a shop on the main drag selling the usual sarongs and woven boxes, and he made ends meet running walking tours into the local rice fields. His English was pretty good and after the usual discussion, when I told him I was more interested in getting a feed than anything else at the moment, I jumped on the back of his motorbike and we headed south of town to a local warung. Over a delicious lunch of Ayam goreng we negotiated our itinerary for the following day.

Putra had good English, a motorbike and excellent business savvy. He offered his services as my guide on a half day trip to walk through rice paddy terraces, following which he would give me a lift back to Sanur on the back of his motorbike. He would also arrange with the owners of my accommodation for a late check-out so I could return and shower before the trip back down the coast. He was absolutely upfront about what was included in the price, and insisted that he would pay his share of our lunch. The price we negotiated was about what it had cost me to take a taxi then bemo up to Candi Dasa 2 days previously, and I was getting a guided tour thrown in as well! We sealed the deal by going back to his wife's shop and buying a sarong - I needed one anyway.

The following morning we met at 8 o'clock for a short bemo trip north of town to a crossroads where we hopped off to take another bemo into the fields. But in true business style, our driver decided to take us the whole way as he had no other passengers, so we hopped back in for the rest of the trip. Deposited in a nearby village we began our walk.

And there she was, Gunung Agung, the holy mountain, standing over the valley looking down at us. And green, so green it made my eyes water. 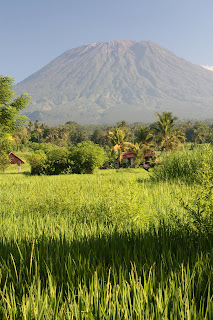 We wandered along the valley for a while, then detoured through a small village where women were drying rice, before beginning our climb out of the valley. The irrigation system is an engineering marvel in its complexity, with water channelled through bamboo pipes, trenches and tunnels from the very top of the hills down a meandering course to the rivers in the depth of the valley. Individual rice terraces can be flooded with water during the growing phase, or drained for harvest. In this region they plant 2 rice crops a year, and between times will plant with peanuts or other crops. And they have been practising this level of intense cultivation for hundreds of years!

Our path took us to the very top of the valley, clambering literally along the paths between the fields, jumping over the irrigation trenches and past locals engaged in various stages of agricultural labour. At the tree line we ducked in to have a refreshing drink of fresh coconut juice - the sort that comes straight out of a freshly cut coconut with the use of a machete and a plastic straw. The local family offering this hospitality tried to sell me some woven boxes, but were not too bothered by my indifference, in fact I think they were more bewildered by my presence than anything else. After our restful sojourn amongst the trees, we continued further along the valley rim and into the jungle. Well it wasn't really jungle, just scraggly rainforest, but very pleasant after the heat of the sun drenched terraces. Onwards and upwards, through another small village then over the crest and down through quite thick undergrowth to arrive outside the village of Tenganan. Since I'd already visited the village 2 days ago, Putra jumped on an ojek while I wandered down the road slowly, taking a few more photos. Putra returned with his motorbike and we headed back to Candi Dasa.

Refreshing shower later, I met Putra for the trip south. He had a proper helmet for me, and had warned me to wear long sleeves to protect myself from the sun and dust etc. But first was lunch, back at the warung south of town for another tasty meal with lots of the local, and very hot, sambal - delicious!! Then we were on our way.

Travelling by motorbike in Bali is such a great way to get around. The wind rushing by stops you feeling hot and sticky, and you feel closer to the locals and what's going on. It's such fun weaving in and out of the traffic with ease. I only had a small daypack, which Putra insisted on carrying up front so no-one would snatch it. In no time we were back to my friends' place in Sanur, doorstep to doorstep beats bemos and buses anyday.

And where did Putra go after dropping me off? Over to KFC to get the kids a western treat - I'll stick with the local version any day of the week thankyou very much!