Day one. Slept in! Woke at 8:10 and had to hightail it straight to the shop to pick up my newly tuned skis and jump on the 8:30 bus up the mountain. Almost forgot my lift pass so had to sprint back to the hostel for that. Exhausted, hungry and haven't even got onto the snow yet!
The day is clear blue skies, no wind, just glorious. Treble Cone has big long runs and a spectacular view down to Lake Wanaka and its many islands. You just have to stop a while and admire the view. 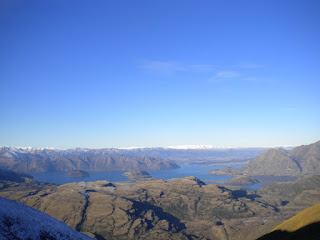 First run was a little wobbly after five years away, so I kept to the baby run. Some friendly Kiwi chap made some disparaging comments about my ancient skis - well at least they're parabolics - then proceeded to suggest that I snaffle a demo ski for the day, off the chaps by the chairlift. So yours truly spent the day skiing in the latest and greatest, and well, tomorrow I've got to go back to mediocre!! 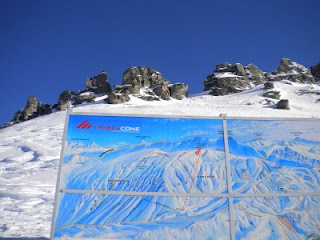 Since I'm here for a while I just stuck to the nicely groomed blue trails, most of which have a gradient close to 45 degrees or more so hardly baby slopes. Only had one spectacular, ski losing, crash, but mostly discovered that my ski legs are in fact still there.
I called it a day around 3pm, when the legs started feeling like jelly. I've done some yoga stretches and am all ready for tomorrow, hopefully with enough time to breakfast first!!
Photos so far