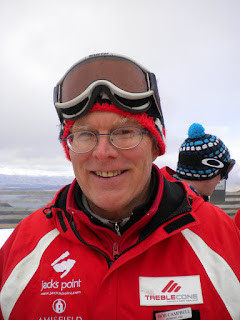 Rest days do all sorts of wonders to one's muscles, along with a genuinely good deep tissue massage, so Thursday saw me back on the slopes having an absolutely awesome day churning down "Bullet" which is one of the many natural halfpipes in The Saddle. With lovely soft snow, and nice smooth sides I was soon making it top to bottom without stacking and ending up with a bucket of snow up the insides of my jacket. Can't say it was stylish, but it was lots of fun!! 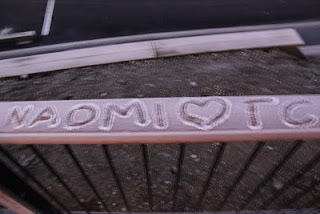 With my new-found confidence and bright red cast, I even headed off-piste, but that was a bit of a mistake, so I booked in for a lesson Friday as it was time to hone some skills. I appear to have reached a plateau in my skiing, somewhat similar to the windsurfing plateau one reaches at the gybing point (or my current impasse regarding forward loops!), where I am really struggling to finish off perfect carve turns, so I subjected myself to some good old advice from an expert.

Having received a recommendation to book a lesson with "Canadian Heidi" from a woman I met in the cafe, I fronted up at 10am to discover Heidi was off for the day. After an apology suggesting dire circumstances for whoever wrongly booked me, Mr Eye Candy introduced me to Bob Campbell, a fellow Vermont USA Instructor with the promise that Bob was "awesome".

Well Bob's a bloody legend I reckon. Knocking 70, Bob's blind in one eye with a hip replacement, and a veteran of over 40 years teaching. Not only has he been teaching skiing for all that time on weekends and school holidays, he's only recently retired from fulltime primary school teaching, including the last few years working with kids with behavioural problems. At a loose end after separating from his wife of 40 years, his colleague (Mr EC) suggested he come and do a season in TC.

Well lucky us! Bob's like the Pied Piper, taking the school kids on lessons every Friday (if you go to school in Wanaka, Friday is sport day, equals skiing in winter!) and has an incredible passion for kids and teaching. He has such a wealth of experience and for 2 and a half hours he was free to provide me with some help with my less than perfect carve turns. Not only did he have me working really hard on getting that pressure going through the terminal part of my turns, he had fantastic historical stories about the origins of the exercises, as well as great nuggets about boot fitting, ski tuning, orthotics and about making sure you " face the walley"! It was just the sort of advice I needed, although I can't say the legs were in quite the condition of yesterday!

But Bob's best nugget came late in the lesson, when he told me what caused the large mass of rock to form which is such a dominating part of the landscape when looking down from TC to the lake. Apparently it is the result of two glaciers, which merged at this point as they came down the valleys on both sides. The sediment of the glacial moraine was forced together then compressed by a few tonnes of ice, apparently forming the largest structure of its kind in the world. It amuses me hugely that it takes a curious American to discover this fact. God love him!! 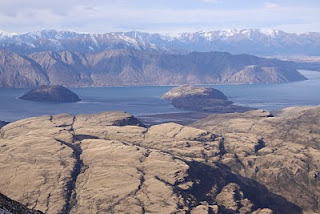 So I've one more day left, in which I shall try not to injure myself, then it's back to the sunny west coast. Next year I'm determined to come longer, because I've got to get more time on the mountain if I'm ever going to master those turns. My god this is sounding so similar to my windsurfing obsession isn't it?

Talking about which, one more month till the sea breezes should start kicking in and then: well if I can break an arm and still keep skiing, I can bloody well do a forward loop right????