After the freezing weather of late June and early July (we even had a frost in balmy Geraldton, shock horror!!) we at last got some rain and the water tanks are all filled.

Mishap number one: build a new water tank stand but don't cement the legs in. Load empty tank onto stand, fill with water and slowly watch the legs begin to sag. Accept the inevitable and clear the way for the big event. Some time in the night I am woken by a loud creak, and a heavy thump. Check out the damage in the morning: tank still upright though now on the ground, still full, at jaunty angle, but not damaged. Tank stand in pieces, neighbouring fence buckled. Noone injured. Lesson learnt: Cement the legs in next time!!

Mishap number two: last year I went skiing in New Zealand, where I rediscovered my inner ski goddess. So I booked myself another two weeks in the white stuff for this year, and even managed to convince a friend to join me for a week. Now the snow hasn't been that great so far, but Monday night it began to fall and we had a wonderful day at Cardrona in the soft stuff till the poor visibility forced us in to the cafe. Then yesterday we returned to my spiritual home at Treble Cone, with my brand new skis and a mountain covered in lovely snow. Neen went off for a lesson and I headed over to The Saddle to try out my new "Lotta Luv"s in the soft bumpy stuff on Cloud Nine. Almost at the bottom and I hit a small depression and well, stopped!! Thrown forwards my boots released and I face planted into some nice soft snow. Thank goodness for goggles and helmets.

But hang on a sec? My hand feels a bit sore, actually quite a bit sore. Must have sprained it. Shove a bit of snow on my wrist and get myself organised, clear the snow from my goggles, get back into my skis and get down the rest of the hill. Take chairlift up to the top of the Saddle, nursing what feels just a little worse than a sprain, OMG, could I have broken it? Decide to be sensible and ski back down to the base so I can visit the medical centre for an XRAY. No XRAY facilities, but on inspection there is some rather suspicious swelling happening around my distal radius. Me and the doc are pretty sure I've bingled it, so into a backslab I go, and an appointment is made for an XRAY down in Wanaka that evening.

And yep, I am now the proud owner of a nice POP cast due to a small distal radius fracture. More a buckle really, no displacement, though the doc has sent off the films to the orthopods as there's another line he's not sure about (I think it's just a blood vessel). But it has kind of cramped my style a bit. And made fitting into a ski glove an impossibility!

Neen also had a fall yesterday, and has a sore right shoulder, so between my left arm and her right shoulder we're a sad and sore pair!! But Wanaka is a delightfully pretty place so we aren't exactly bored, though I will be after a few days. Awesome sunset the other night too. 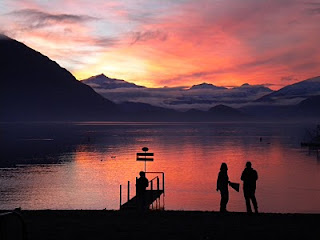 So I'm now off to buy myself a mitt. Something that'll fit over the plaster and get me back on the slopes. As I said, only a minor mishap!!