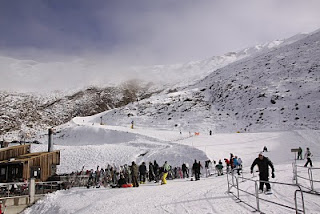 After breaking my arm on Day 3 I took one day off to allow the swelling to go down then returned to the slopes of Treble Cone with a massive XL mitt over the offending plaster to see if I could still have some fun. The thought of spending another day under an inversion (this is when a thick layer of cloud sits over the lake but it's blue skies and sunny up on the peaks) filled me with dread so despite some pain I headed up the mountain regardless. Now I fully admit that this is totally reckless behaviour, but I reckon my skiing is good enough now to at least keep me upright on the groomed runs. I also needed to see the guys at the ski school to cancel my lessons. 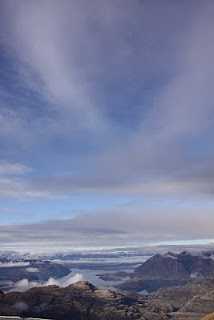 I've always wanted to do a week long ski school with a group of like minded skiiers, but rarely come to the slopes during the peak ski season when these classes are held. The groups are usually small, and in particular they run ones for women, seeing as women ski differently to men. Bit like windsurfing really, us gals do things with style whereas the lads just use brute force!!

Anyway, this year TC had a ladies ski improvement week for the final week of July, which fitted perfectly with my trip and didn't clash with Neen's week with me either. Neen's now returned home to hubby and gorgeous kids so I'm back to shared dorms and working out ingenious ways to cook dinner with only one serviceable hand!! But the best laid plans....
The boys in red at the ski school have been fabulous, organising a refund, and encouraging me to get back on the slopes. I've had to play the helpless female a few times to ask people to tighten my boots for me, though I'm not sure that "helpless female" and "crazy woman skiing with a newly broken arm" are totally compatible statements! Who cares, I'm having fun!!
I've conquered the green slope (there's only one) and today discovered that "Main Street" doesn't seem to be as steep as I remembered it, so it may be time to hit The Saddle. The boys were right, who needs arms??
*Thanks Russ for the kind words of encouragement, and to everyone else who has written fun things on my cast.