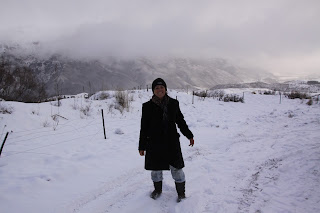 After a more than usually traumatic day of travel I arrived in Wanaka last Sunday evening. Here's a recap of the adventure to get here.


Alan and Demi kindly dropped me off at the airport for my 4pm flight, which arrived as planned and then didn't leave. A small matter of some sort of engine problem, so the plane was grounded and we had to wait for the happy news that a replacement plane and crew would take us down to Perth at 7:30pm instead. Enough time for my midnight connection, but no time to catch up with friends Jane and Sally in Perth, see Sally's new house and enjoy a home cooked dinner of beef bourguignon washed down with some nice red wine. Bummer!! But Rhonda came and picked me up and me and the kids took Hazel for a final walk before back in the car and back to the airport.

The Perth departure lounge was surprisingly quiet for a Saturday night, and at least one TV monitor was tuned to SBS for the penultimate stage and ultimate decider of Le Tour de France. Unfortunately with no sound. To the sound effects of some crap on a commercial station, a fair handful of stalwart bike fans cheered our Cadel to his awesome victory with a fantastic individual time trial that made little Andy Schleck look like a common cycle commuter. And then Cadel cried, as we all expected him to do, in true Aussie sports tradition. My prediction: Cadel for Australian of the Year next year, us Aussies just can't resist a tearful triumphant sportsman.

Onwards to Sydney on the redeye, where news of Cadel's victory hadn't reached the eastern shores as they had all been sleeping and it was too late for the morning broadsheets. A planned breakfast date with my sister Vanessa didn't eventuate after she unfortunately slept in after only getting to bed at 4:30am. How she can party that late at her age is beyond me! We had a good chat over the phone anyway, then into the next departure lounge, where I scouted around for a likely ride to Wanaka. I got lucky, finding a couple with a 4WD hire who were happy to give me a lift. All sorted.

It didn't end there. As we approached Queenstown the pilot informed us that there were snow showers and a fair likelihood that he might not be able to land so just not to panic if we suddenly revved and headed up again. But we were lucky, and with snow covered hills all around, we came down through the valley and landed first go. Then looked out the window to whiteout. Lots of snow, all over the ground, actively snowing, very pretty. What a nice entree to a ski trip.

Not quite. A snowstorm which is pelting snow down on Queenstown isn't exactly a regular event. We had arrived in the middle of a huge cold spell and storm front, which over the next 12 hours covered the entire South Island, including Christchurch and Dunedin, in up to 20cm of snow that ground whole cities to a standstill. Unbelievably, we were the only plane that managed to land in Queenstown, the earlier flight from Melbourne hadn't made it, and other airports were similarly closed. Somehow, we got in, then the heavens closed.

Whilst my new friends organised their car, I had a chat to a few locals and bus drivers, to discover that the long road through the gorge via Cromwell wasn't passable due to a "bus blockage" and that the only way we would get to Wanaka was over the Crown Range. With chains, in a 4WD, through a snowstorm!! The Crown Range is very exposed, and can be extremely treacherous with a nasty switchback which was totally covered in snow, but my friends knew no better and were up for it, so we schlepped our bags across the snow covered carpark to the 4WD, made sure we knew where the chains were, and headed slowly on our way. As guide and the only one who'd ever put chains on before, I well and truly earnt my seat, and 2 1/2 hours later, with frozen fingers and wet muddy knees, we were in Wanaka dropping the ski grear in for a tune up before saying our goodbyes. At last I had arrived.

I'm staying again at Wanaka Bakpaka, which has comfy warm rooms, a great kitchen and a fantastic common room looking out across the lake. And when I went into town to go shopping, who should the first person I bump into be? John Rendell, one of my Coronation Beach windsurfing friends, and apparently two other friends are staying up at Cardrona. Small world.

And then it was time to sleep, because the skiing begins on Monday!! Bad luck about the snorer in my dormitory....