Not quite out for the count

Now mum when you read this please do not get upset. Shed a tear or two but I don't want to hear any of that advice along the lines of maybe I should give up a sport where one minute you're having a lovely time and the next you are careering over the edge of a cliff and rolling down a hill into a rock. OUCH!!!

After my collision last week I took it easy for a couple of days, hit the swimming pool for some self managed hydrotherapy, and then got back on the slopes. Kel and Janet are here for 9 days, so I joined them at
Cardrona on Saturday for a cruisy day on much flatter terrain than Treble Cone. It was quite a revelation to realise that my skiing has improved massively and that I wasn't bothered heading off piste to find a few patches of untouched snow after a 10cm dump overnight. One of the troubles with Treble Cone is that the terrain is so steep, often narrow, and frequently full of bumps, so you work hard for your enjoyment, and I haven't had that feeling of being in control very often. The trip to Cardrona really improved my confidence in my skiing ability.

And then calamity struck!!

The cat tracks linking the different ski valleys at Cardrona are really flat, so flat that you can't get any speed up on them and often have to pole or skate to get across. As a result they seem to get a few parallel grooves in the snow, which can be nasty if you catch an edge on them. I'd been very careful when using the tracks, but on the last run of the day I must have been a bit too blase, caught an edge and just careered sideways straight off the edge. 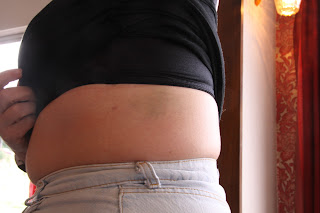 Unfortunately the lovely thick soft snow I fell into was peppered with rocks, and my chest bounced off one of them, causing me to be temporarily winded. Kel helped rescue me and my ejected skis, which were half buried in knee deep snow at jaunty angles. I climbed back to the track, we inspected the somewhat amusing skid marks, then popped back into the skis and skied back to base before the pain became so unbearable that I'd need professional help.

The trip back to town in the car was painful, as have been the last few days. Finding a comfortable sleeping position has been a challenge, given my left chest and right shoulder are both sore, but after a visit to the local medical centre I now have enough codeine and tramadol to start my own illegal laboratory!! Laughing is lethal, so joining friends for a comedy at the local cinema would be bordering on masochism. If I stay in one position I'm fine, but any sudden movements and a massive spasm down my left side leaves me in tears. Have you any idea how painful a burp or a hiccup can be? I was lying in bed last night thinking if I don't move soon I'll have pressure sores! Between a rock and a hard place (pun intended)!!

I am getting better every day, but whether I get in any more skiing before I leave is a moot point. I'm not that fussed, as the weather is quite warm here now, and I've made a few friends to while the time away with. I am hoping I'm better enough to survive the trip home, fingers crossed on that one.

And soon there'll be seabreezes!!!