Powder maketh the goddess......fall over!!

I arrived in a blizzard, then after 3 weeks of fairly benign weather a huge cold front hit NZ again and brought most of the country to a standstill. Roads and schools were closed, the garbage trucks failed to turn up and news reports said that up to 3/4 of the country was under snow. Even snow flurries in Auckland, pretty impressive stuff. And powder fell in the mountains, yippee!! 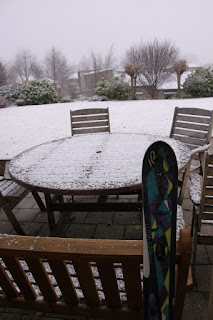 Back in sleepy Wanaka, I've moved into flash digs while Marko (a friend from home) joins me for a week of skiing. He's much better off piste than me so I have sent him off to enjoy himself whilst I torture myself trying to master the mountain. Unfortunately a persistent chest cold has worsened since he arrived and he is now under the weather and not able to take advantage of the awesome conditions. 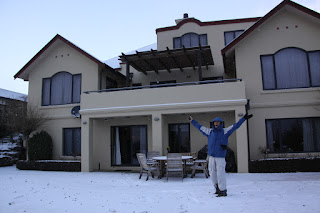 The last few days have been marginal on the mountain, with dreadful visibility which makes for exciting times when confronted by ice underfoot, then a soft pocket of pow, all in the space of a few metres. My ability to ski in whiteout conditions is non existent, due to debilitating attacks of nausea, dizziness and a quite distressing propensity to just fall over in a crumpled heap! Thankfully I have discovered that seasickness tablets work well, and that this ski goddess has presciently brought some with her. But today the sun came out and it was time to find those freshlines and join every person in the South Island who could get up to Treble Cone in tracking out the powder.

Now I am a total powder novice, so I cunningly recruited myself the services of young Heidi again for a morning of bouncy turns and queue jumping on the saddle quad. And what can I say? Powder is lots of fun! And wonderfully soft to fall into, and hilariously funny, albeit inconvenient, when boot ejections happen. And if I can just bloody well get my upper body to stop that bending like a banana thing, I might just nail it. So I've booked a few more lessons so Heidi can crack her whip and push me down the black runs and massage my psyche just a little. Ok, a lot!!

And yes, I got some freshlines today!!!!