Back in the garden at last

Last week I was in Melbourne. Although great to catch up with family and friends, experience cold weather again (not so nice really), and go to some groovy pubs and restaurants, I'm glad to be back home again. This weekend the temperatures have at last begun to dip consistently below 30 degrees making it nice weather at last for getting out into the garden. Yippee. 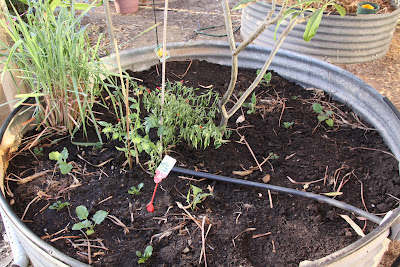 Despite the fact that I'm jetting off in less than 4 months for New Zealand, I'm still determined to grow my veges even if the house sitters end up with the bulk of the harvest. There really isn't anything like getting your hands dirty in the garden growing your own food.

My vege garden lies fallow over the summer months because it's just too hot for the plants to do much more than survive. Even with shade cloth, a summer that quite bizarrely had a real scarcity of hot blistering easterlies, and fairly regular watering, I managed to lose a few plants. Not everything carked it though, the Kaffir lime and Bay are thriving, the dragon fruit vines are climbing away, and I even got 3 papaya fruit this year. You'd think that figs would grow well in this mediterranean climate, but the poor soil here on the coast really makes it a battle. With considerable pampering, something you don't expect to have to do with a fig, mine's still alive. Not holding my breath on how many years till it fruits though….. 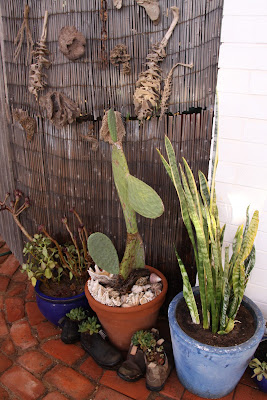 So now it's time to replenish and replace. Lots of organic matter - manure, compost, pea straw and shredded paper - and water can make my soil look half decent for a few months. Then the heat and desiccating winds of summer turn it into a wasteland. No it's not quite that bad, but gardening here is definitely only for the dedicated.

Today I've sown snow peas, spinach, eggplant, capsicum, tatsoi, oregano and tomatoes. I'm contemplating where to plant a new papaya tree, and have repotted some succulents into old work boots. I've half filled one of the large ceramic planters I bought on sale 2 years ago with old styrofoam packing chips so I don't need as much soil, and am thinking of putting a grape vine in it. Then I can train it on wires to get some much needed summer shade downstairs. And lastly, I've been doing some paving. 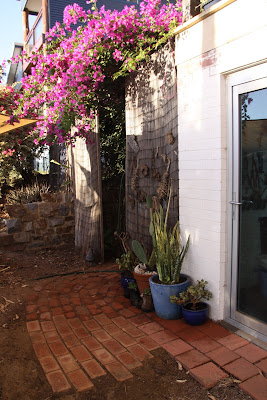 Aah the paving. What started along the north side of the house with some old bricks from a demolition site, has become an ongoing saga to build a winding garden path through the vege patch. It's a saga because I'm doing it entirely with reclaimed bricks and pavers, so am at the mercy of what I can get. I've asked on Freecycle a few times, and have been around the demo yards, but it's a tough gig. You'd think most people would have a few spare bricks lying around, but it just isn't that easy, perhaps I'm not trying hard enough. Time to put an ad on Facebook! 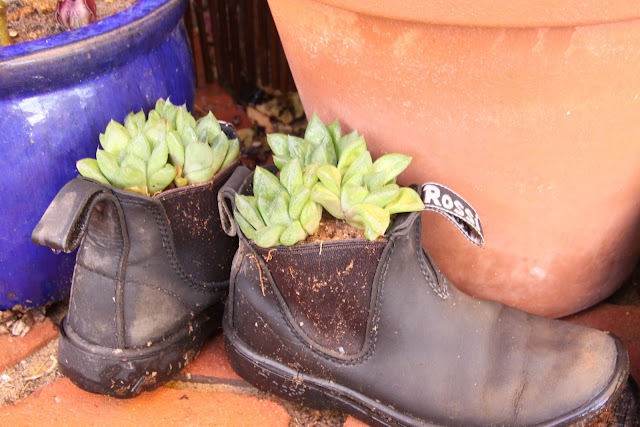 After a long day in the garden there's a real sense of achievement. Little green seedlings poking up through wet soil, a cluster of newly potted succulents, a new stretch of paving, and the trellis erected for the snow peas. All that's left is to sit down and watch Gardening Australia over a celebratory glass of wine. Cheers!!