After a weekend at Akaroa the ski goddess moves on down the South Island to Mackenzie Country. This is up on a high plateau, taking in wild mountain scenery and vast brown plains. It has beautiful glacial lakes and is home to NZ's highest mountain: Aoraki or Mt Cook. 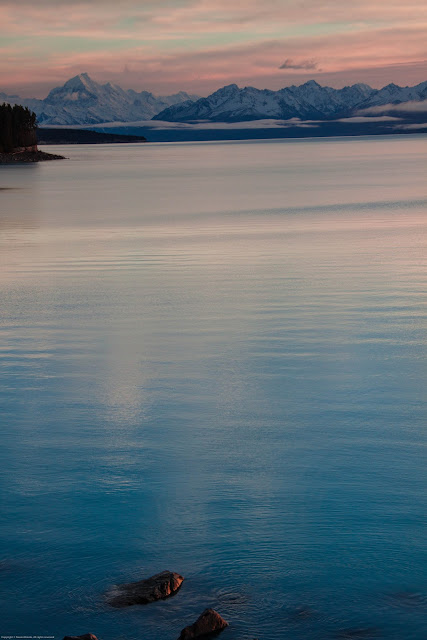 The ski goddess spent most time up on the ski fields of Round Hill and Mt Dobson, both family friendly fields with not too demanding terrain for beginners and intermediates. Round Hill, in particular, caters for all levels, because right next to the cruisy slopes of the main part of the resort is a kick arse huge mountain with a rope tow going vertically up it. Ski Goddess wimped out on trying the nutcracker on her first day there - a mixture of poor weather and visibility and just plain cowardice - hoping to get back again later in the week. That didn't eventuate....

Dobson was more to my liking, with some nice ungroomed slopes higher up the slopes where the beginners dared not venture. It was lacking full snow cover however, resulting in a few nasty rocky surprises to avoid.

After three days skiing it was time to take advantage of the beautiful scenery and do the trek up to Mt John, an observatory overlooking Lake Tekapo, where the night skies aren't polluted by too much light and the frequency of cloud free nights is high. Having timed my visit with some very cloudy nights and a full moon, I failed to take advantage of this aspect of Tekapo, but the daytime views were still worth the effort.

Thursday afternoon I received a phone call. The weather window looked good for a trip on the Tasman Glacier for Friday. Plans for braving the Round Hill nutcracker were shelved, and as I watched the rain coming down Thursday night I hoped Friday would be a bluebird day.

Will I get to knock one more experience off the bucket list?