Last month I at last did a renovation I've been meaning to do for years. Which is to remove my asbestos roof and replace with a tin roof, and get some insulation installed in the ceiling space.

Blue asbestos was mined in WA for many years, and we continue to see the health effects in the form of asbestosis, lung cancer and mesothelioma. Until the 1980s fibre cement products had asbestos in them and my roof, my fences and possible even my cladding, is not immune. It's fine until it breaks or shatters, and then the fibres can be inhaled, which is how lung damage occurs. So no tradie will drill into it, making it impossible for me to install solar panels or hot water, or replace my TV aerial when it broke 18 months ago.

Asbestos roofing is dull grey, and although in theory it has some insulating properties, it's not much good at reflecting heat. Instead it tends to absorb heat. So after a few hours the house gets quite hot, and after a few hot days and nights in a row it's impossible to live upstairs without the air conditioner on. As I like to live a green life, I'm averse to using the aircon if I can avoid it, but even downstairs gets stuffy after a few days without cool breezes.

We have two asbestos removal companies in the region, both very busy, but I managed to get a quote then worked with a builder to co-ordinate its replacement. I just wanted a simple tin roof, but deciding on a ceiling was more difficult.

The reason I have put the renovation off for so long is that I don't have a ceiling space. Instead I have exposed beams that I'm quite fond of. Working out what sort of ceiling treatment I could get that would look good, provide my roof with the insulation it needed to keep the house cool, and still keep the positive vibe/karma that my house exudes was a source of personal angst. But we came up with a solution that I'm very happy with. 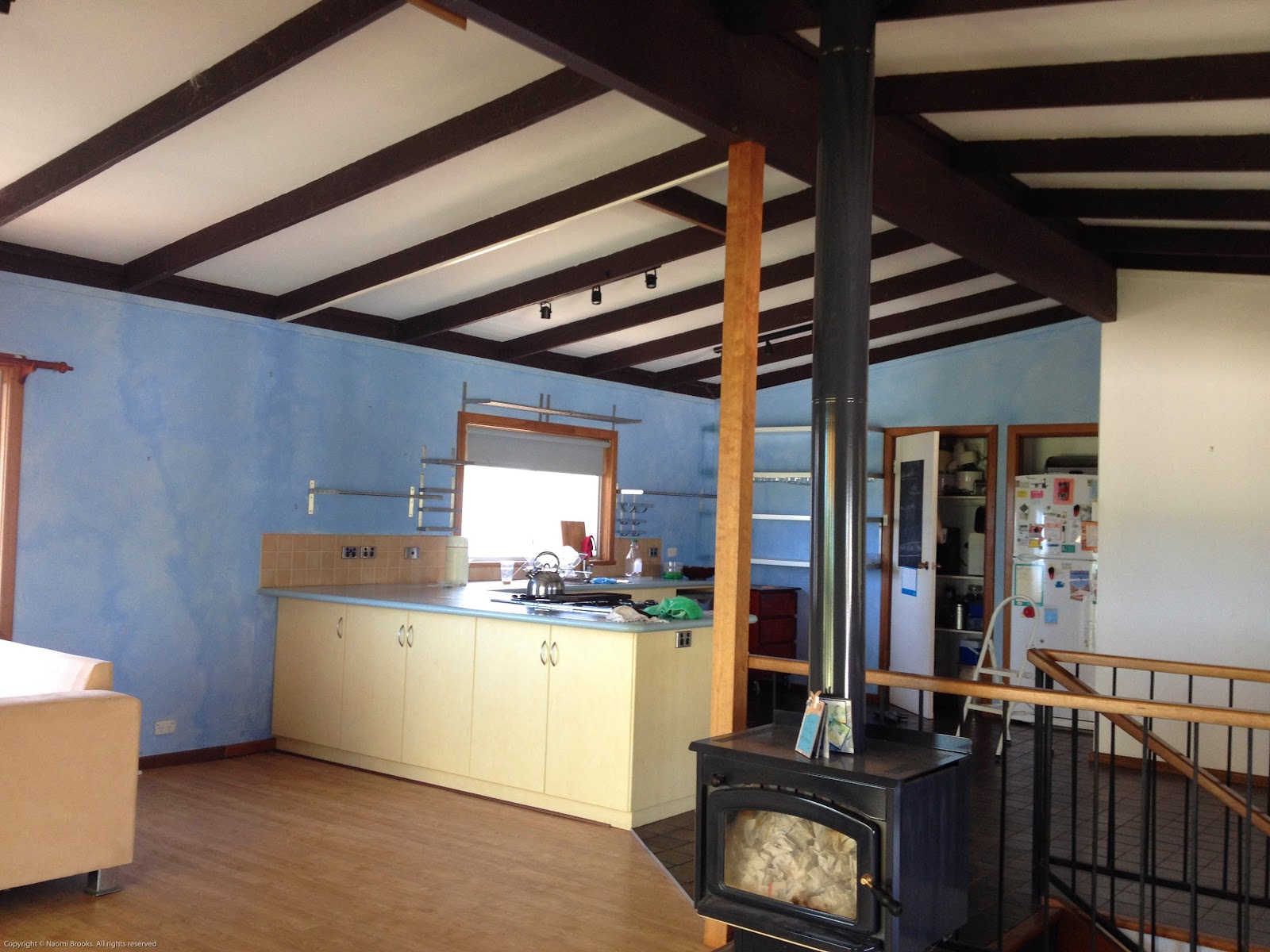 There's something very soothing about my house that everyone who visits notices and comments on. It's not just my personal bias when I talk about my home being my sanctuary, a relaxing place that makes me feel like I'm on holidays. It really does have some sort of positive energy that rubs off on visitors. Even the tradies working on the house were saying how much they loved working there. I'm pretty sure there's some powerful Feng Shui going on.

On Monday the scaffolding went up and on Tuesday Chad and his team removed the roof. The old foil lining/insulation flapped around in the wind overnight, scattering stuff far and wide, but no rain fell though it was forecast for Wednesday. Wednesday they put the tin roof down, whilst some dark storm clouds threatened to the north but only sprinkled a couple of drops. 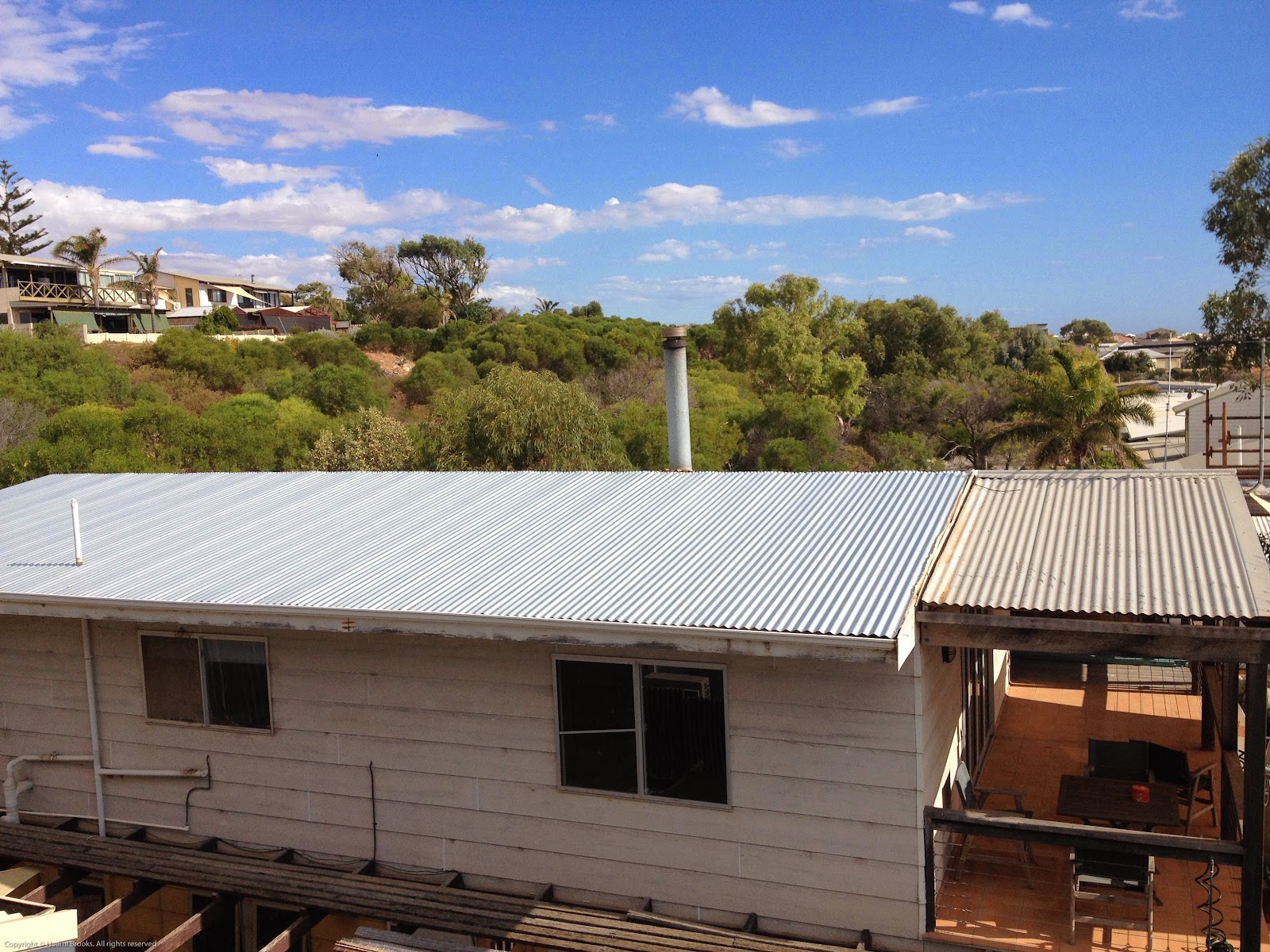 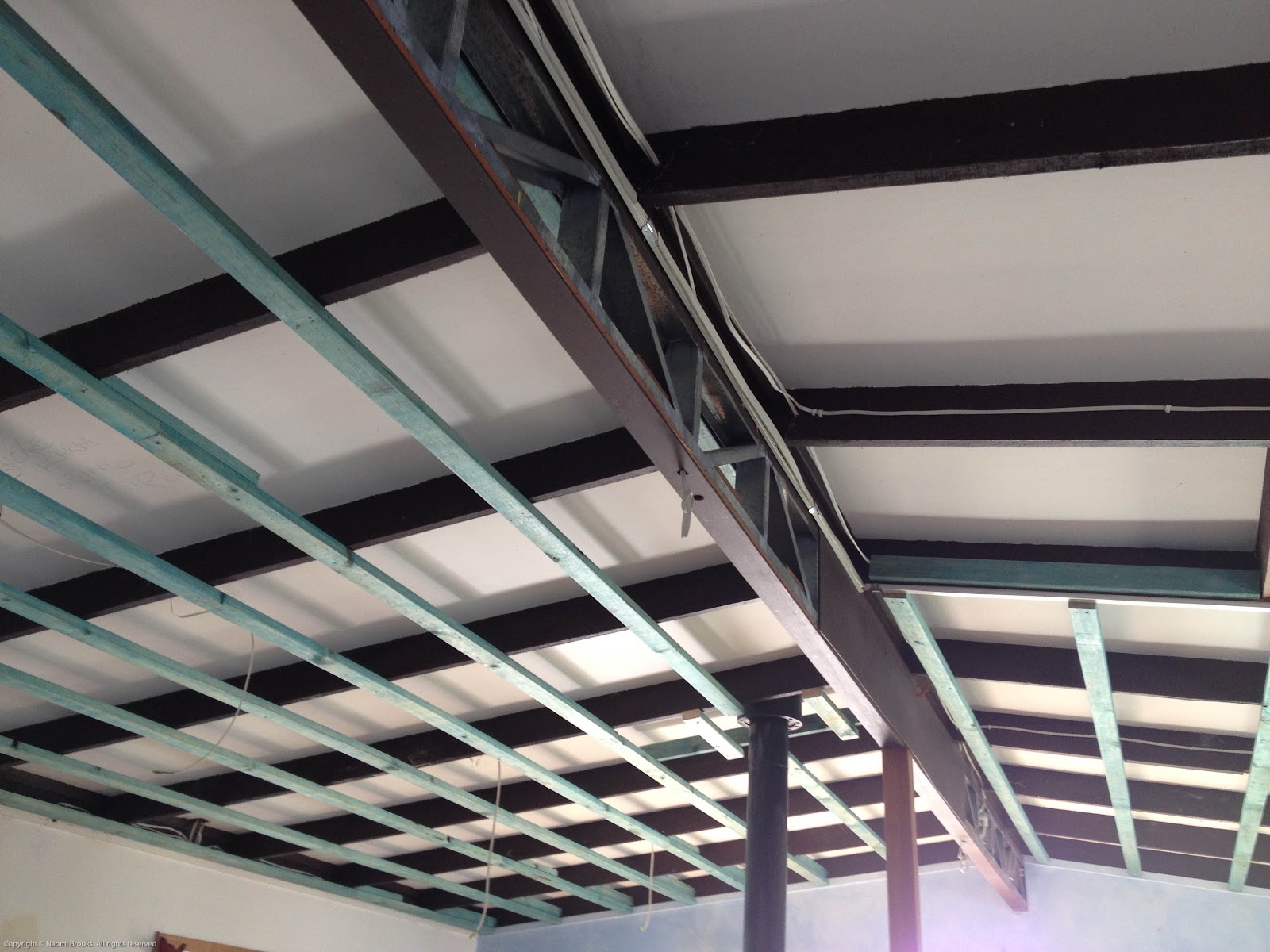 Thursday they put the roof cap on and made it watertight and began battening the ceiling space, then took a break till Monday, when they finished the battening and began insulating with wool batts. Then the ceiling boards and trim got put on, the electrician returned to fit lights and fans and then it was done. All finished in less than 2 weeks. 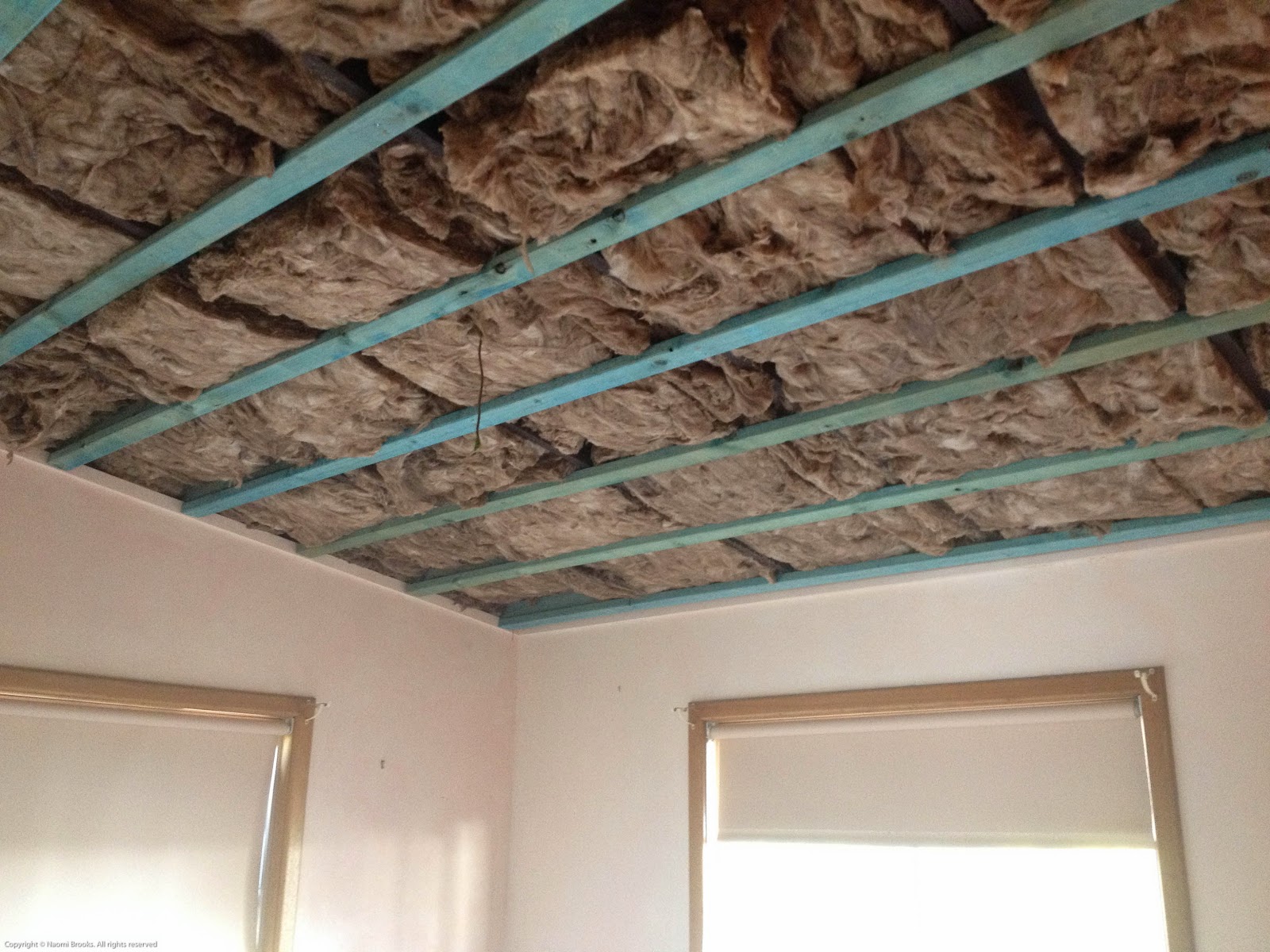 The new roof is transformative. When I get home in the afternoon I no longer walk into a hot stuffy space, but an airy comfortable temperature. I'm really pleased with the ceiling treatment and new LED down lights but the electrician needs to return to redo the fan controls because there seems to only be 2 speeds: very fast and "takeoff"! I like the idea of fans slowly moving air, not the noise of an impending tornado disturbing the tranquility! 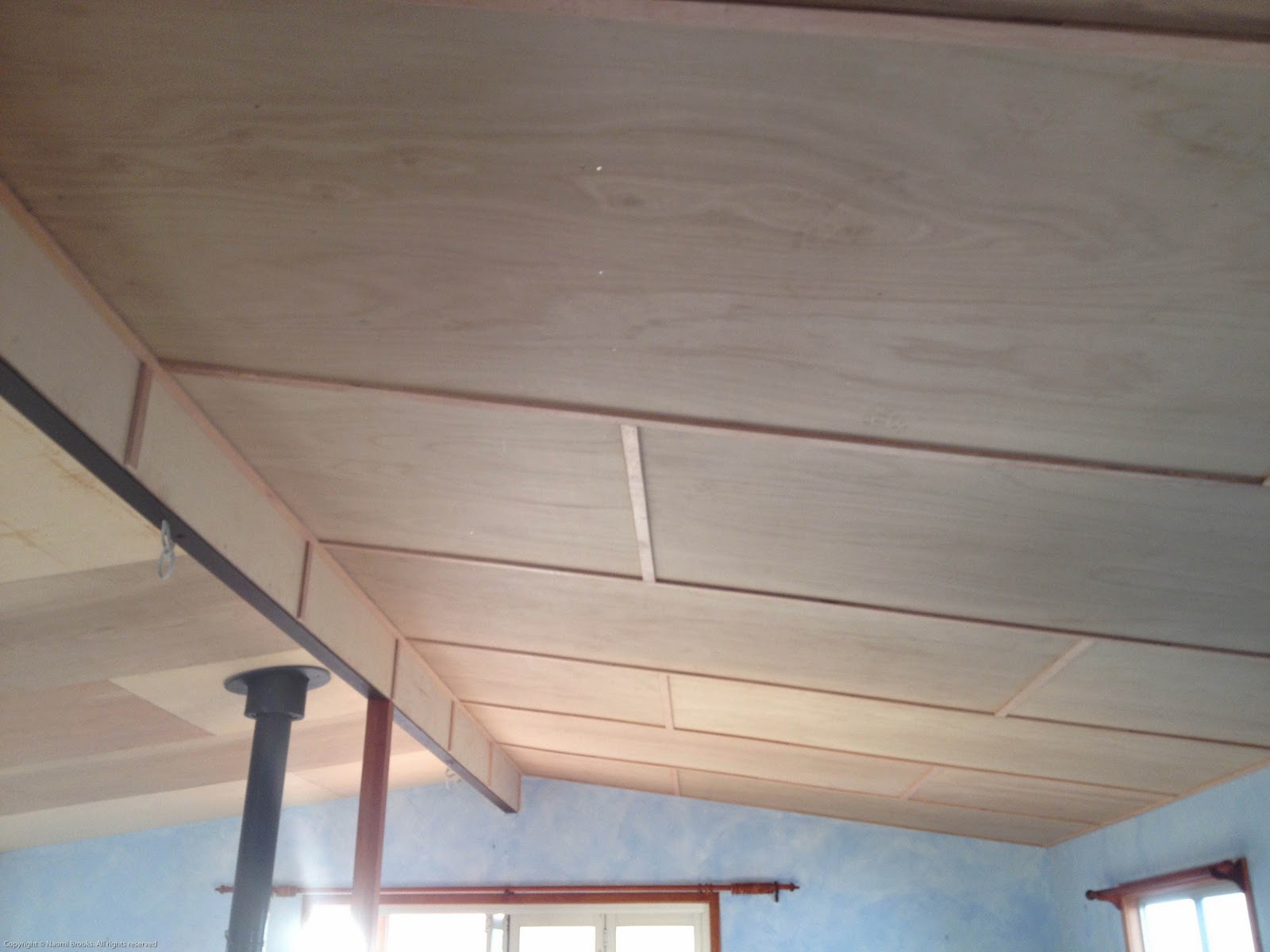 Next came painting. I'm a bit of a fan of textured matte finishes rather than uniform or shiny painted surfaces. I happen to have a weird aversion to the finish created by a paint roller. I just don't like the look. So I'm painting the ceiling with a good old paintbrush.

For the bedroom I wanted a really rustic look, so have gone for a really slapdash paint job which still exposes some of the wood grain underneath. It's not to everyone's taste I'm sure, but I really like it. I also took the opportunity to paint over my old futon base with a coat of matte white. 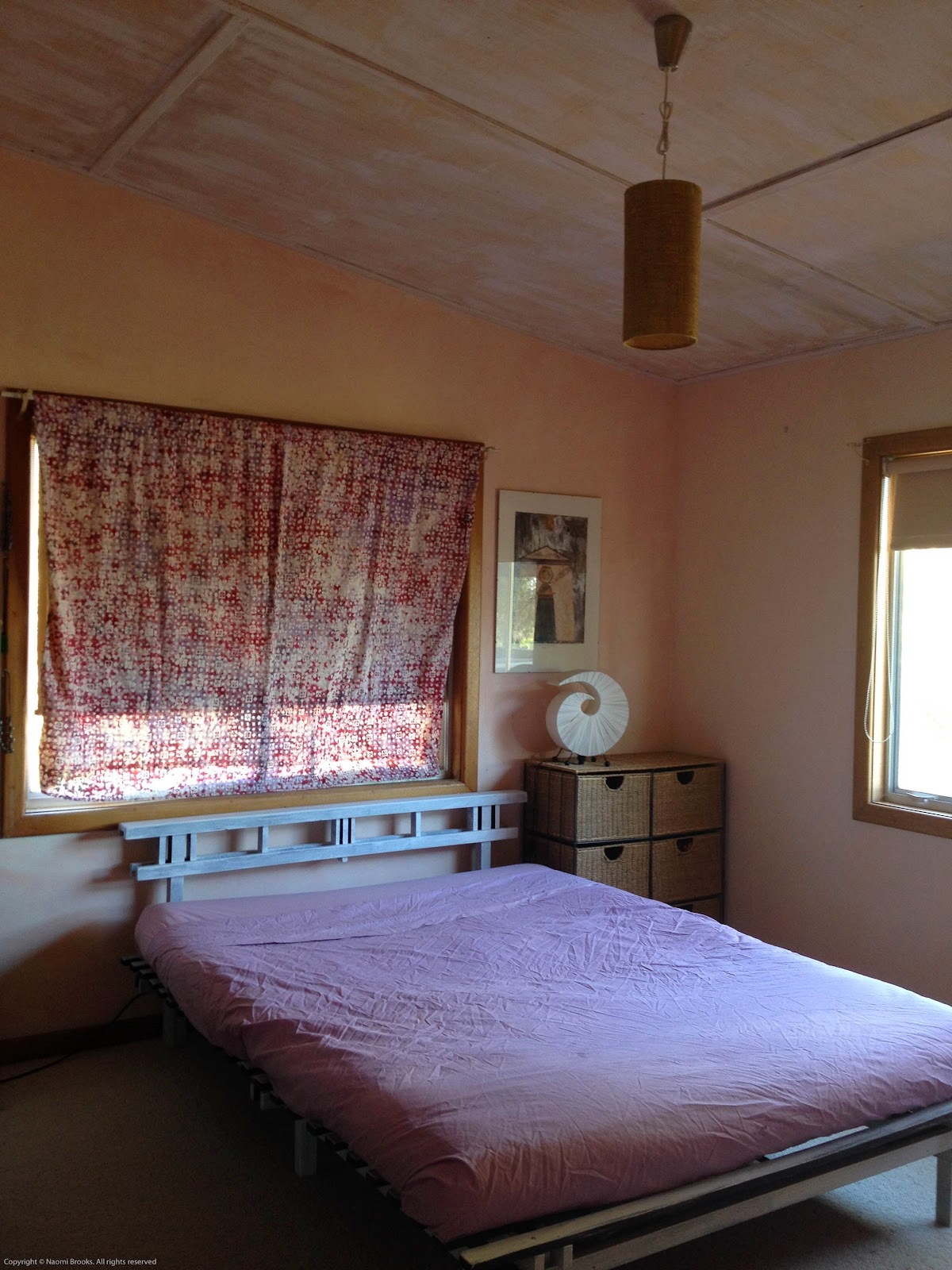 The main living area I've gone for a more uniform cover, but there's still a wood grain visible, as well as brush marks. Some friends suggested just sealing the ply but after a week living with that wood I just couldn't stand it. 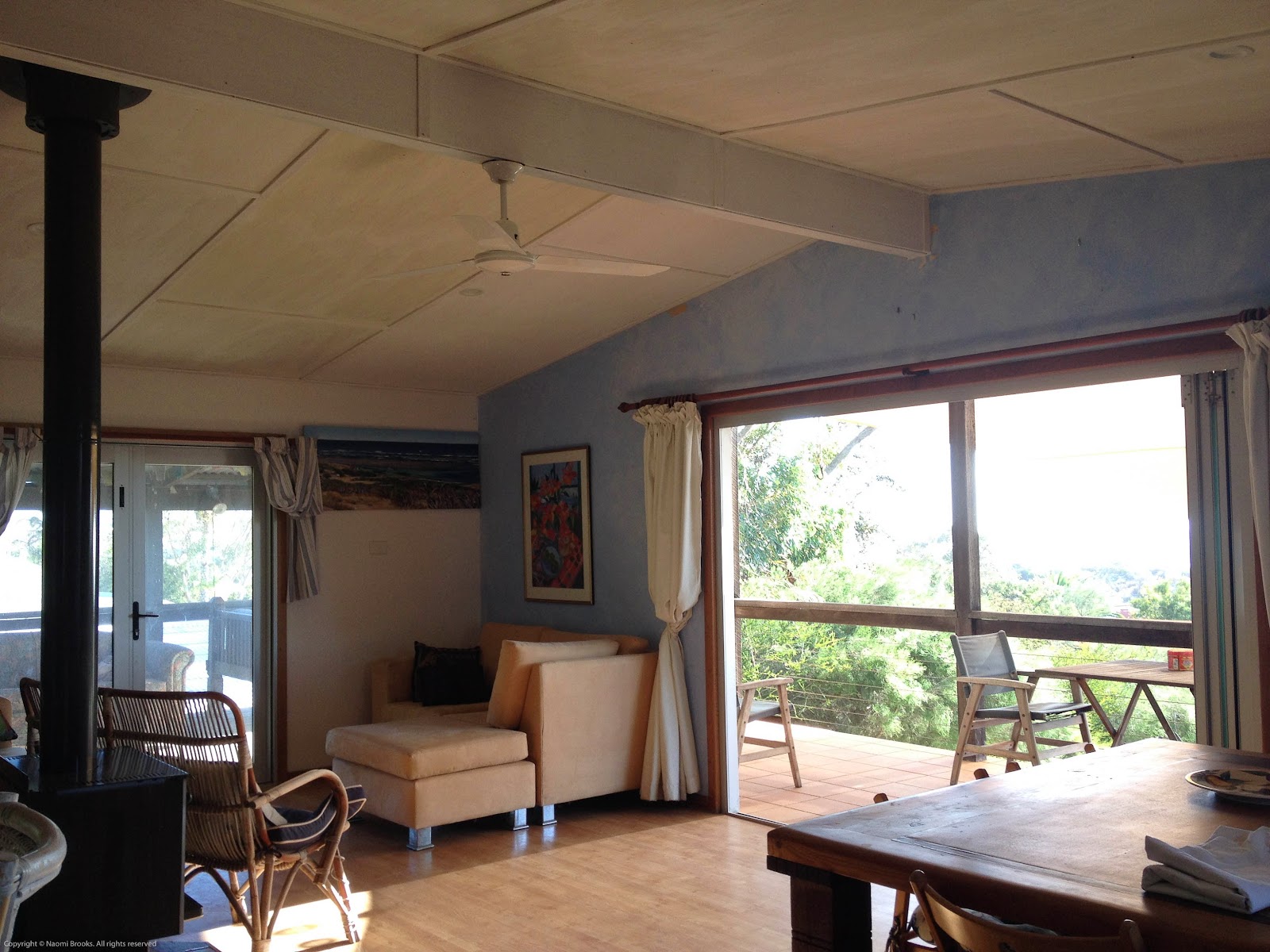 I've still got half the living area to paint, and it's going to be interesting doing the area above the stairs. Hopefully I'll survive that endeavour!!