The ferry left at 8:30 am from Jepara. Anna dropped me off at the port and I had to stand in a long line to get my ticket. I'm taking the slow boat (4 hours) which costs $4. The fast boat was full, so I had no other option.

By the time I boarded the ferry all the seats inside were full, as was any free floor space. What with everyone smoking it was a better option to climb a further flight of stairs to the top deck. A sunny blue sky, fresh air, available seats, and a four hour shadeless crossing ahead of me... 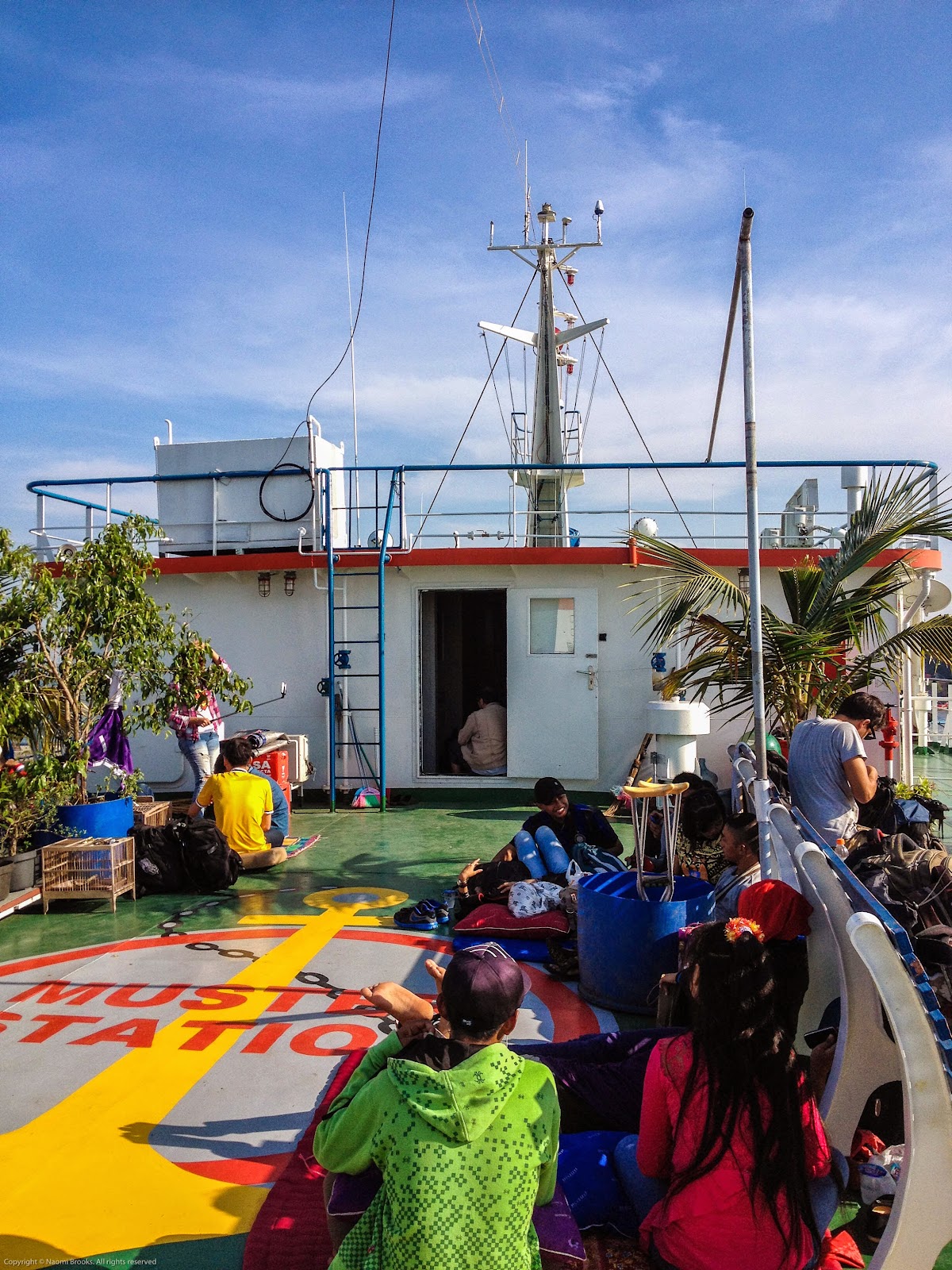 I found a place near some other foreigners and next to a bunch of students from Semerang. I chatted for a few minutes with the students until the ferry departed and they went off to find some shade. The foreigners ignored me. I sweltered, happy I had my hat, and then found a little shade by rigging up my sleep sheet between railings to give me a little respite. With a small breeze and being out of the sun I even managed to snooze for most of the crossing.

As we entered the harbour at Karimunjawa the clouds looked ominous and it began to rain. Not much, but enough to take shelter. Then as we docked and were about to disembark the students from Semerang kidnapped me!!

They just decided I was joining their holiday. I suppose I could have said no but hey, I was up for the adventure. 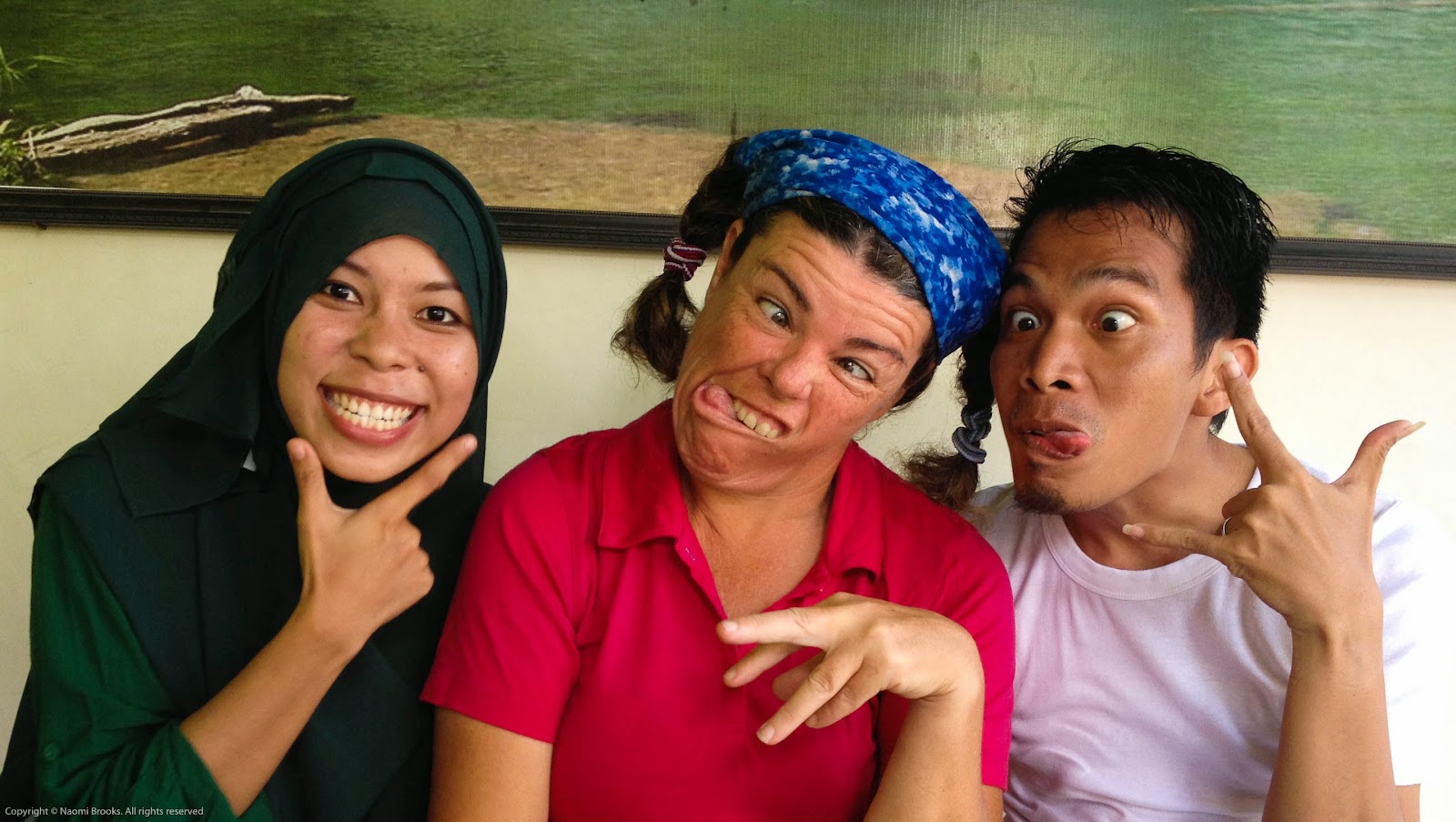 We waited for "Mas", which is a generic name for a young man, to turn up and drive us to our homestay. The six of them (four women, 2 men) shared 2 rooms and I took the third so we had the whole homestay to ourselves. There are heaps of homestays on Karimunjawa lining all the streets in the small village and scattered along the roads out of town towards the beaches. There's an alun alun near the boat harbour which comes alive at night with street stalls selling food and souvenirs, and a few scattered restaurants elsewhere. Because most people are out island hopping during the day there are slim pickings for lunch, but dinner is quite a different affair. We went for late lunch around 4pm and found a lady selling grilled fish, so we chose 3 fat fresh fish from her icebox and she prepared and cooked them on the spot. Mmmm... 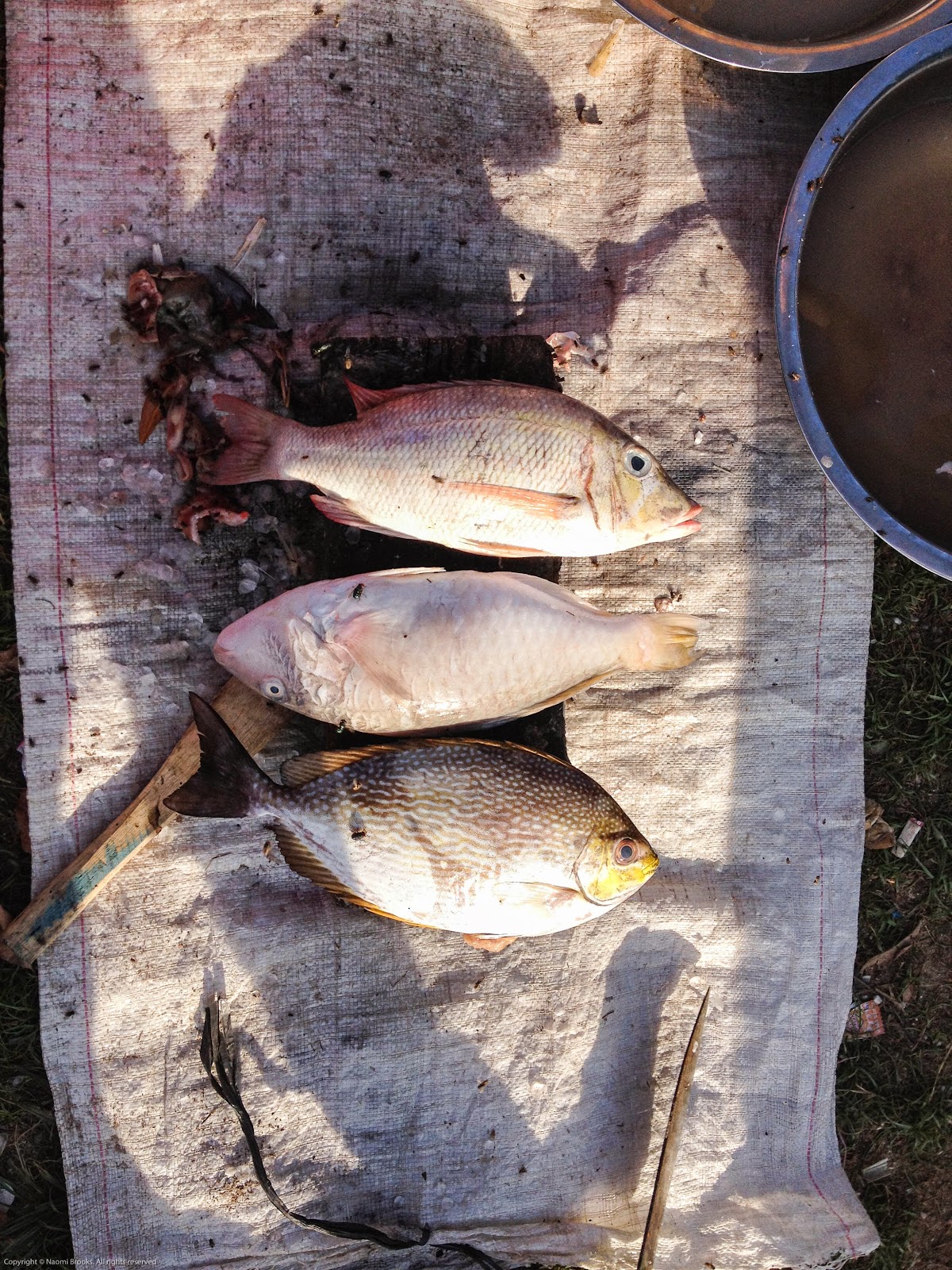 My kidnappers are all from Sulawesi, in fact South Sulawesi near Wakatobi, and I have an open invitation to come visit them should I wish to visit that part of the world. Ha ha, my diving friends, it pays to be kidnapped by the right people!! 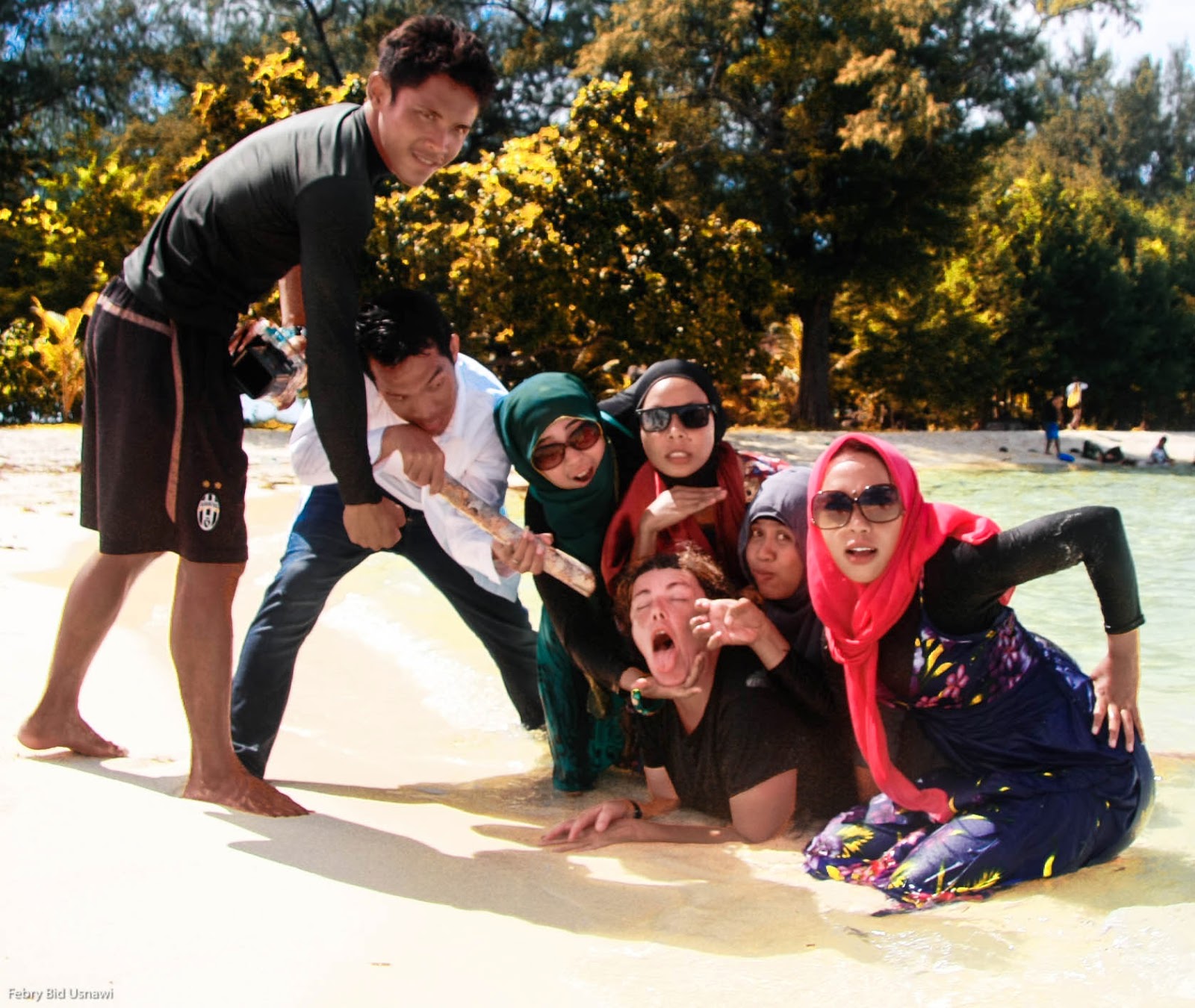 After our late lunch we wandered down to the boat harbour to watch the sunset then back to our homestay where we discussed plans for our holiday. My kidnappers wanted to go island hopping and snorkelling for two days, despite the fact that most of them can't swim. For the seven of us, the price came in at about 150,000 Rp per head per day. That's about $13 for boat hire, guide, lunch, snorkelling gear, and hire of underwater camera. And that's just for the seven of us, not on a big boat with 20 strangers. I immediately agreed to go in with their plans. Is this what they call the Stockholm Syndrome? 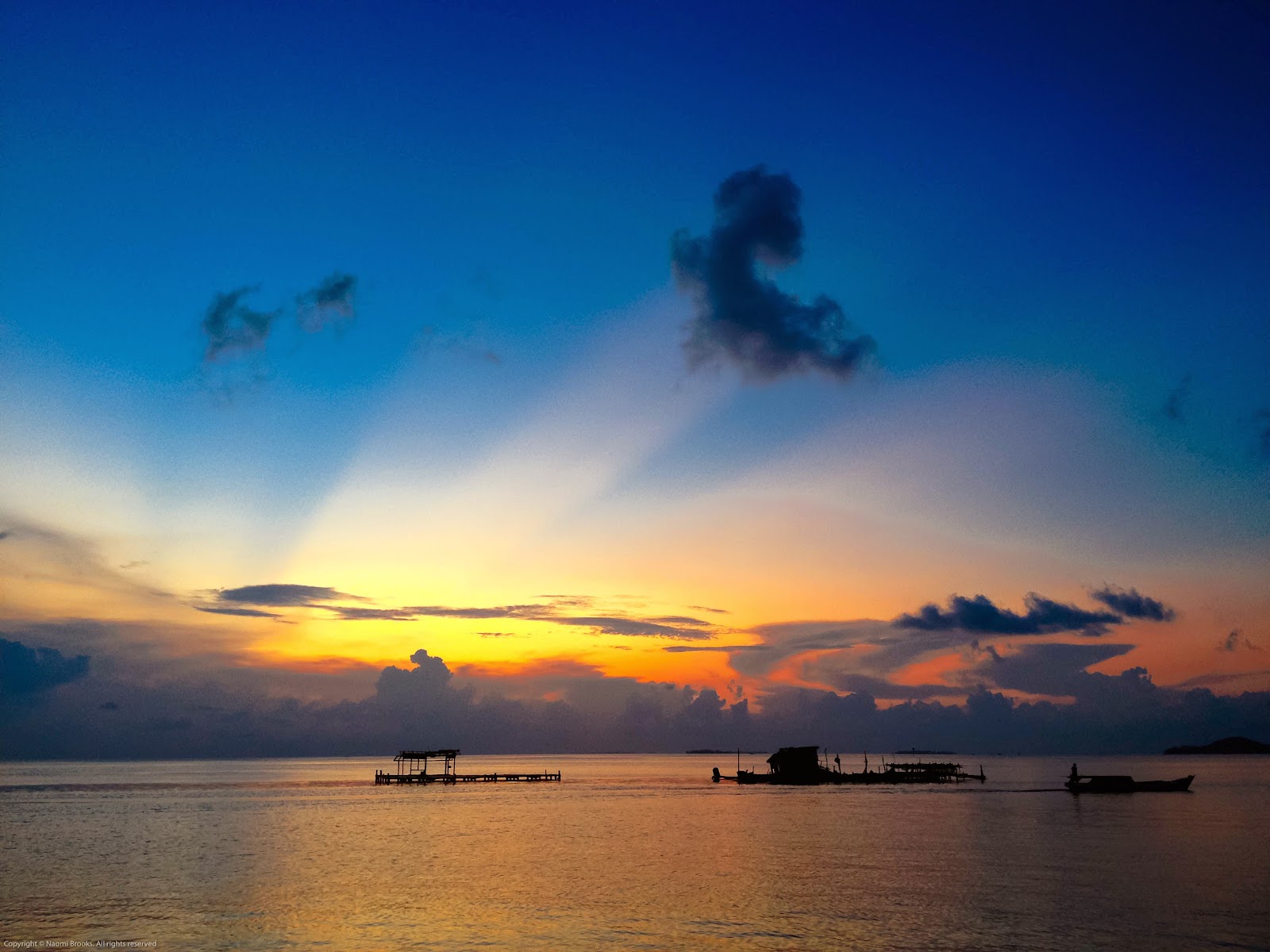 So let's give my kidnappers names shall we?

First, Endy. He's doing a masters in business and is a bit of a character. He's the one who I struck up the conversation with on the boat and who organised the kidnap. 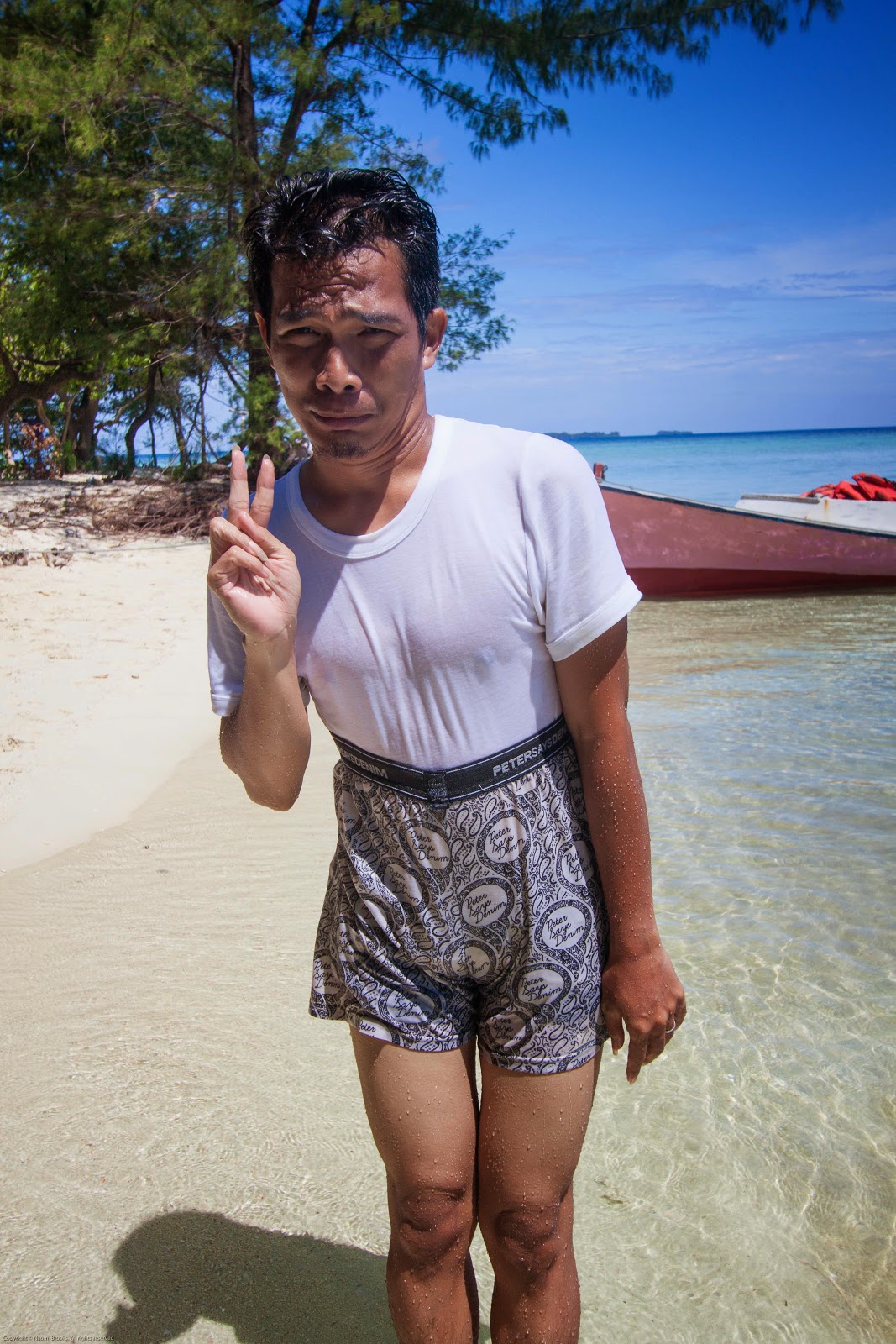 Then there's Febry. Febry is also doing a masters but is a trained journalist and photographer. He gave me a few tips on slow motion photos and reviewed some of my recent shots and gave me really helpful advice on how to improve them. 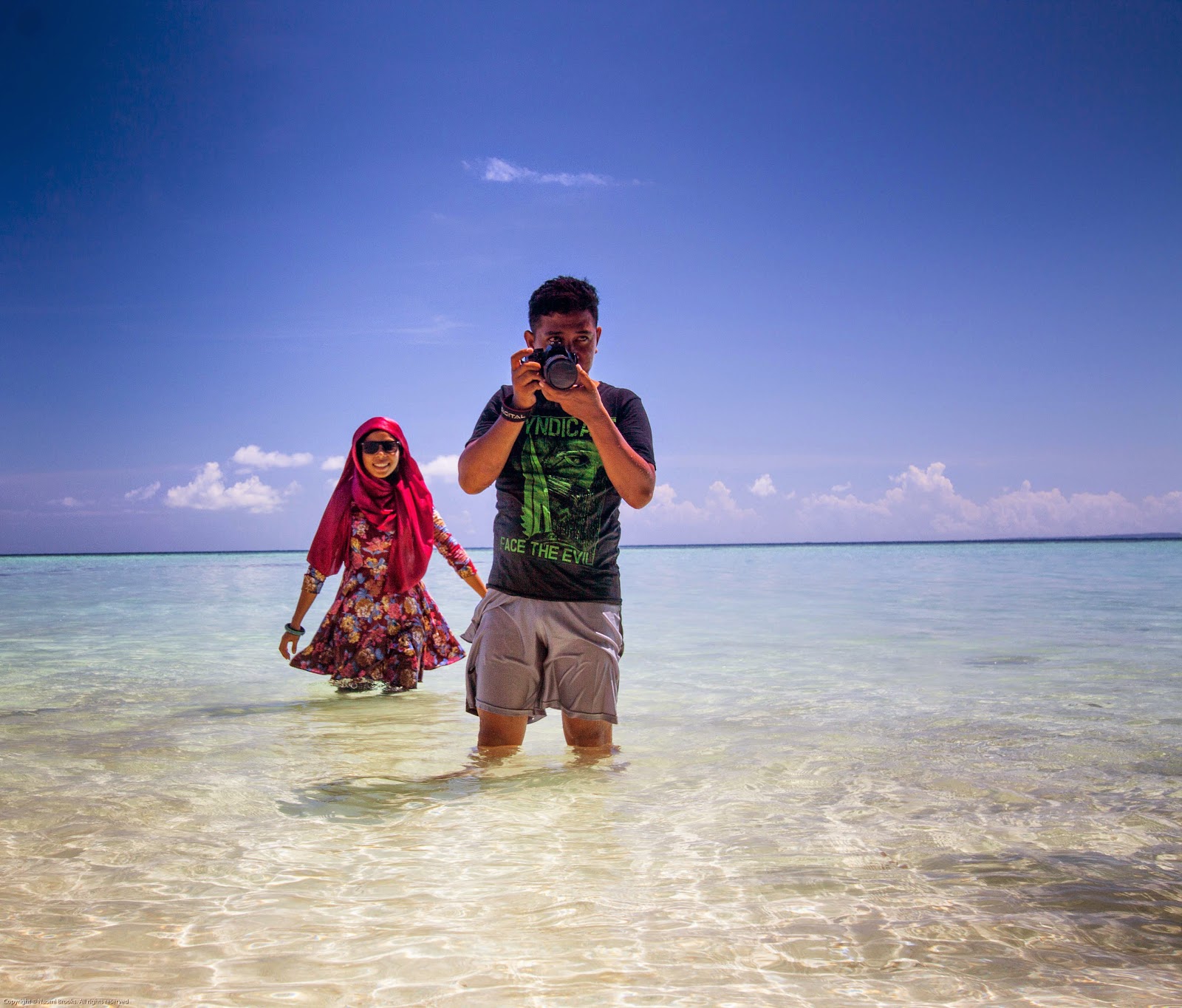 Next is Annink. I think she's Febry's partner (wife, girlfriend I didn't ask) and probably has the best English. But there was very little English being spoken by anyone, so this was a kidnapping in Indonesian language. Which is "diculit' by the way. I looked that up on google translate. 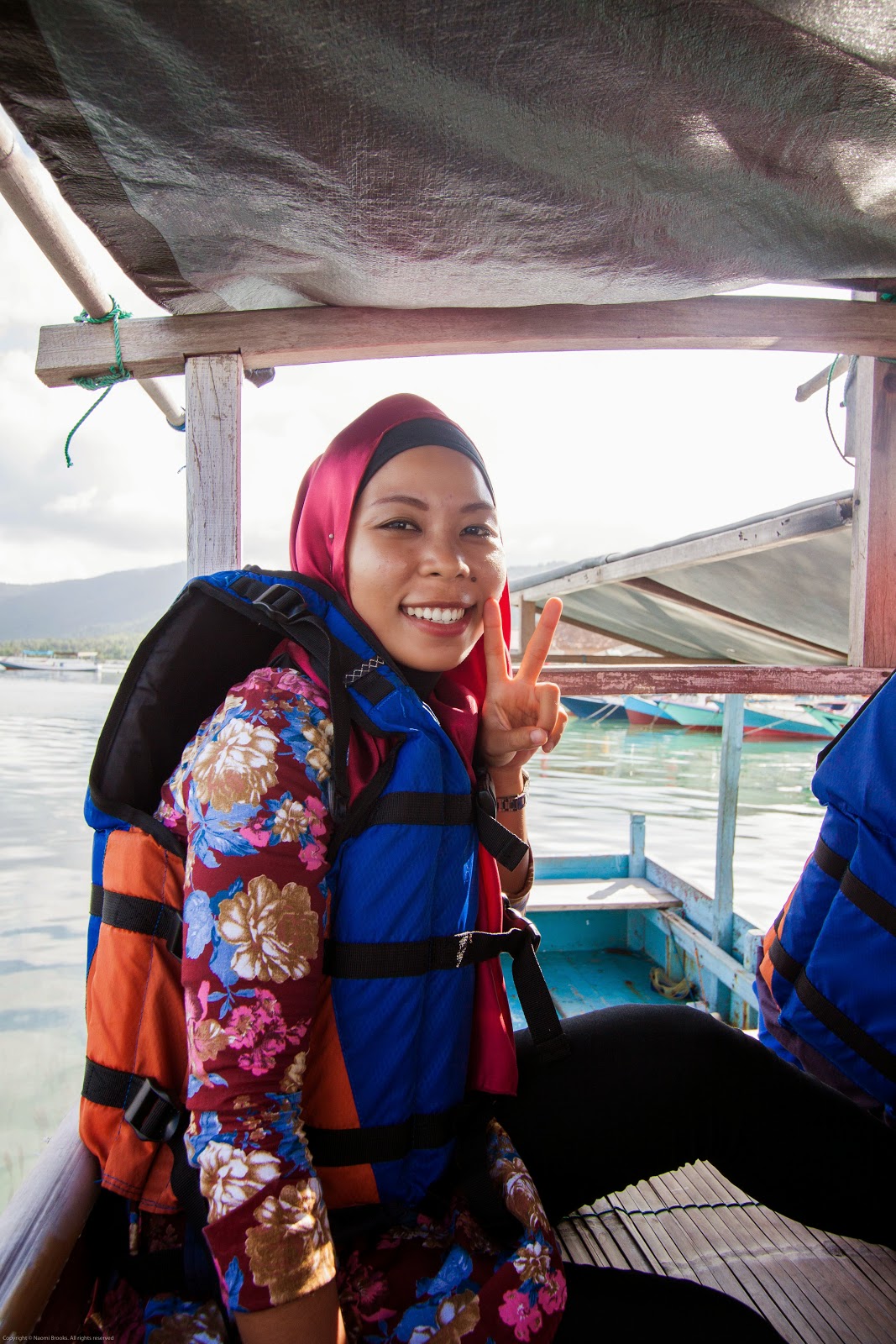 Now Diyan, who flirted outrageously with Mas, who was our guide and underwater camera operator. Seriously, these girls may dress up in their veils and what not, but they play the vixen just as effectively. 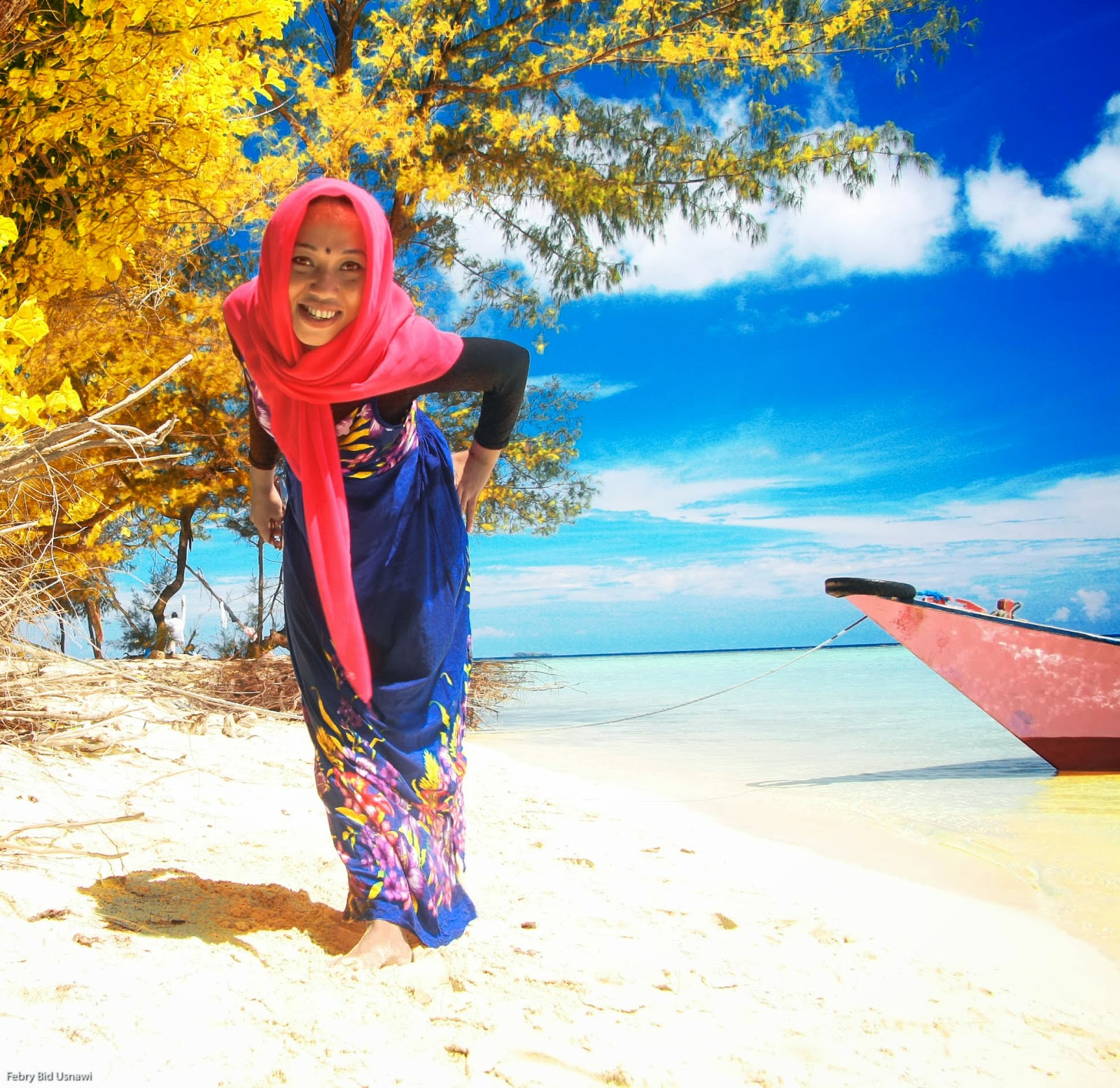 Then petite Fatma, who everyone teased about the size of her feet. She was terrified of snorkelling and kept a firm hold on Mas when in the water. Even though she was in a life jacket, as were all the others who couldn't swim. It's a wonder she didn't drown him. 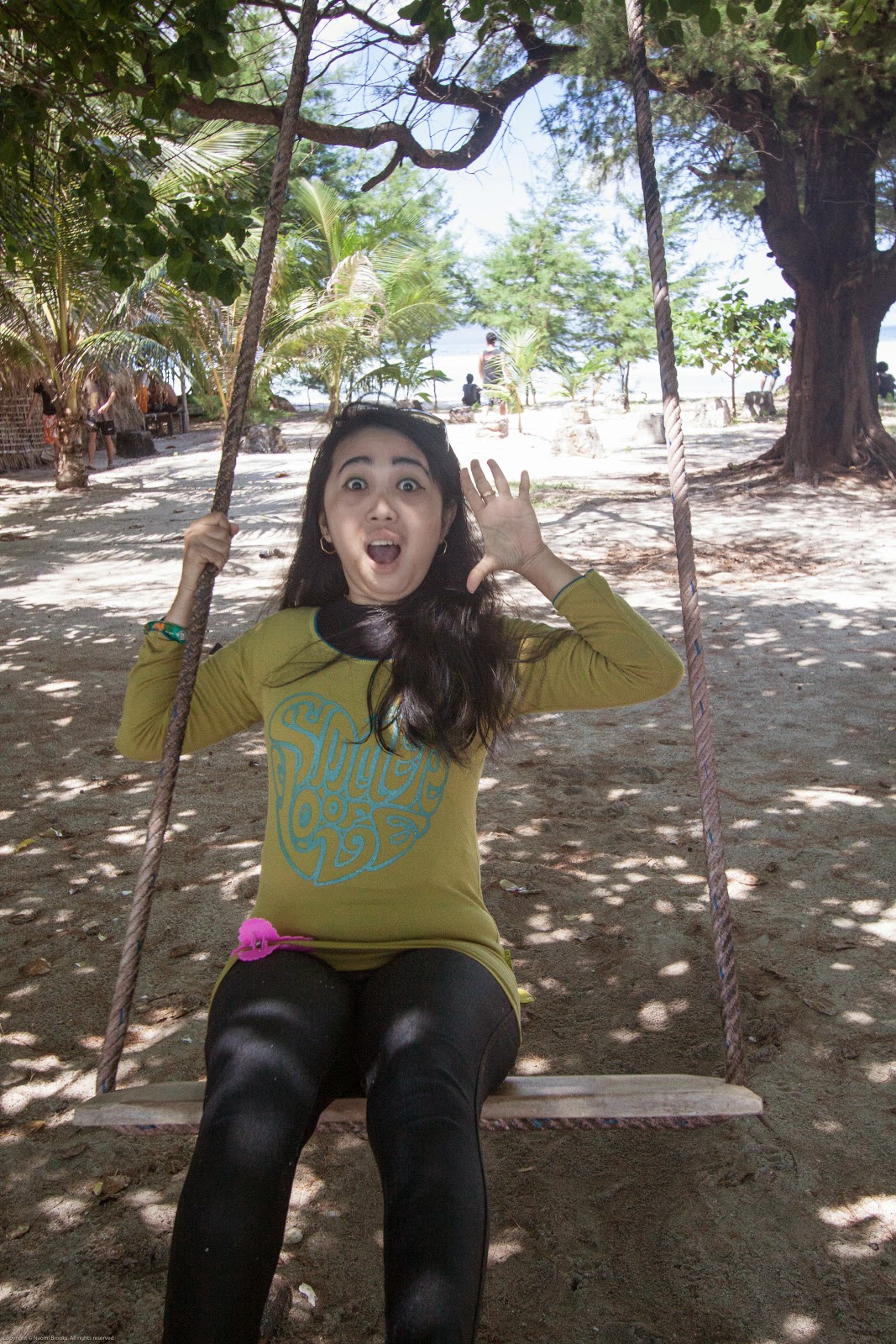 Finally Vina, who's a lecturer in economics, and has an even healthier appetite than the petite girls, who all ate at least twice as much as me. I love how attacking food with gusto is not a negative trait like it appears to be in the west amongst so many insecure women. Vina happily says she's chubby, finishes off all the leftovers, and is the first to get up and model for the camera. Go Vina!! 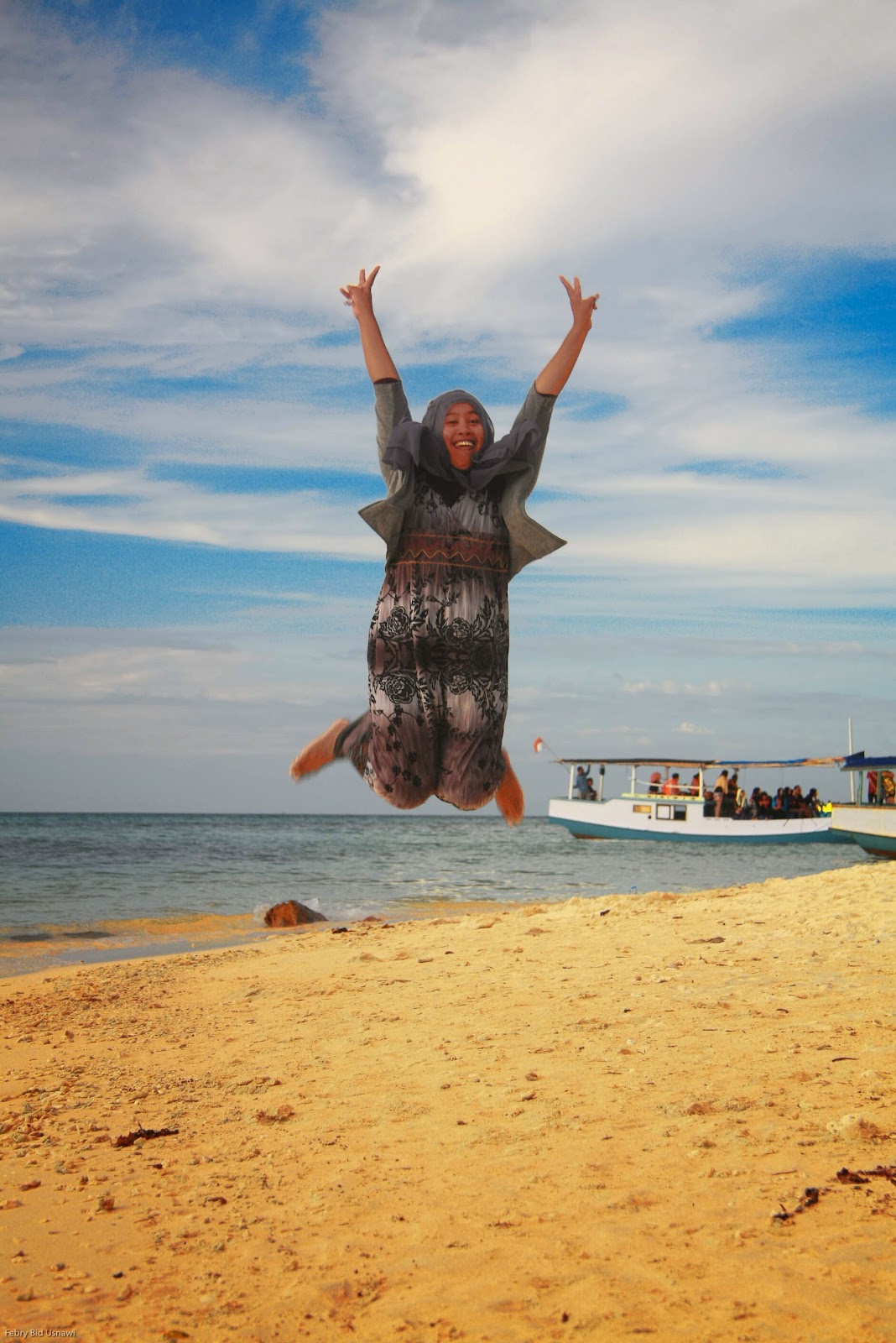 Which gets me to what we actually did on our holiday. We took three hundred million shots of ourselves: swimming with sharks, snorkelling, walking along a beach, climbing a tree, jumping in the air. Oh yeah, we also went on a boat trip.

The level of narcissism of the average Indonesian is pretty hard to articulate. You could almost call it a national trait. Febry loves doing portraiture, which meant we just hammed for the camera all day. Including when we went to see some white tipped reef sharks in an enclosure, went snorkelling, had a huge grilled fish pigout for lunch, went snorkelling on another reef, and went to another beach to watch the sunset. After a time I got a little bored with the continuous selfies, something they never tired of. It wasn't helped by me having a funny tummy for the last few days and suffering from a bellyache that even trips to the loo couldn't sort. There's only so many times you can jump up in the air after lunch when your tummy's feeling a little tender... 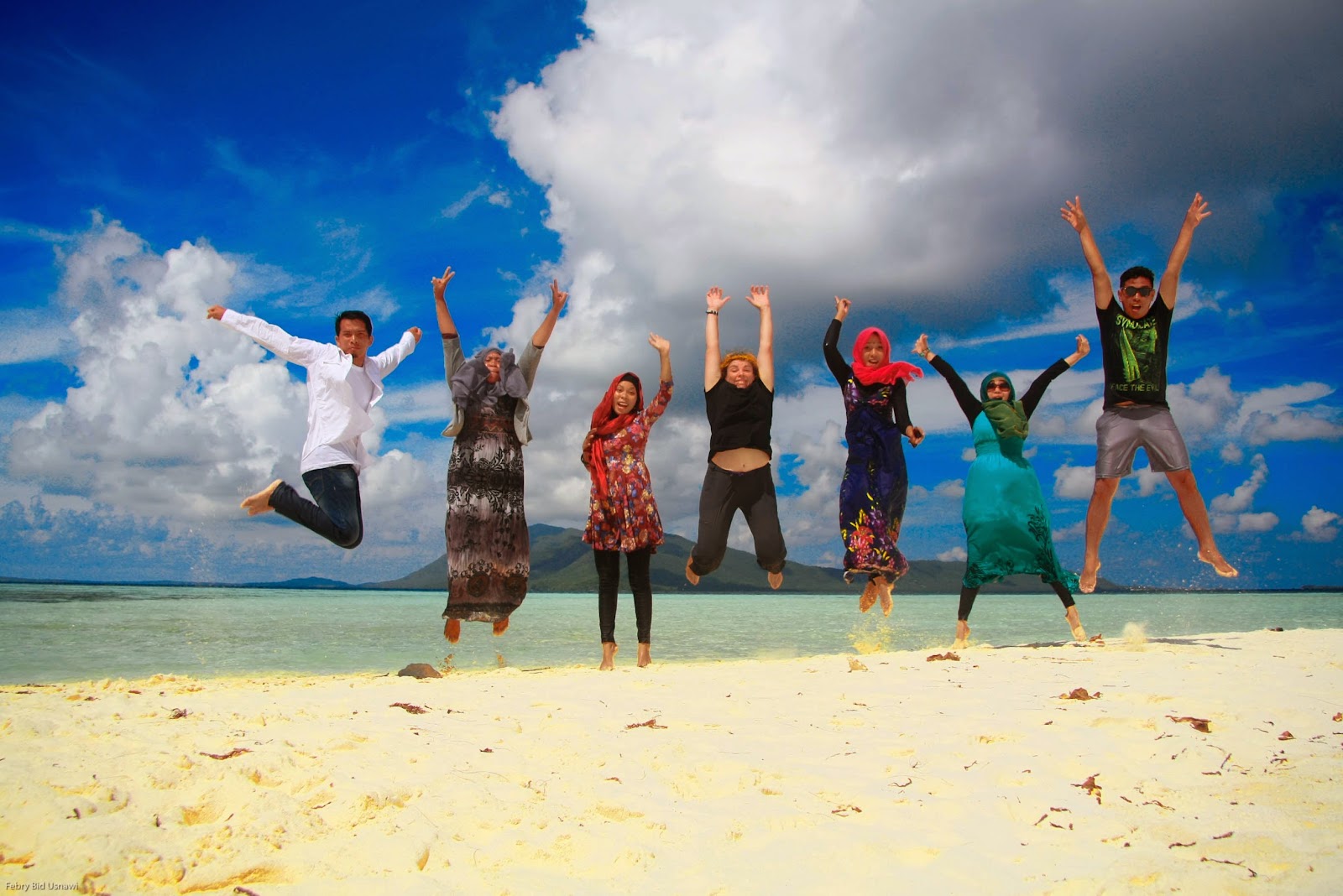 For those interested, the reefs we visited weren't exactly teaming with fish and there was alot of coral that had been bashed around by snorkellers and boats. There are lots of mooring buoys on the reefs, but there's more boats than buoys so that doesn't work. I'm sure there are much better reefs that get less visited by the hundreds each weekend, and given that the underwater camera was hardly used for fish shots, and my companions didn't really spend much time doing anything else but take selfies of themselves snorkelling, it's best that they wreck a couple of reefs and leave the rest alone. Endy, however, suffering from fear as he can't swim, ended up really enjoying just swimming around with me holding his hand and pointing out various fish and corals. And they have Wakatobi on their doorstep!! 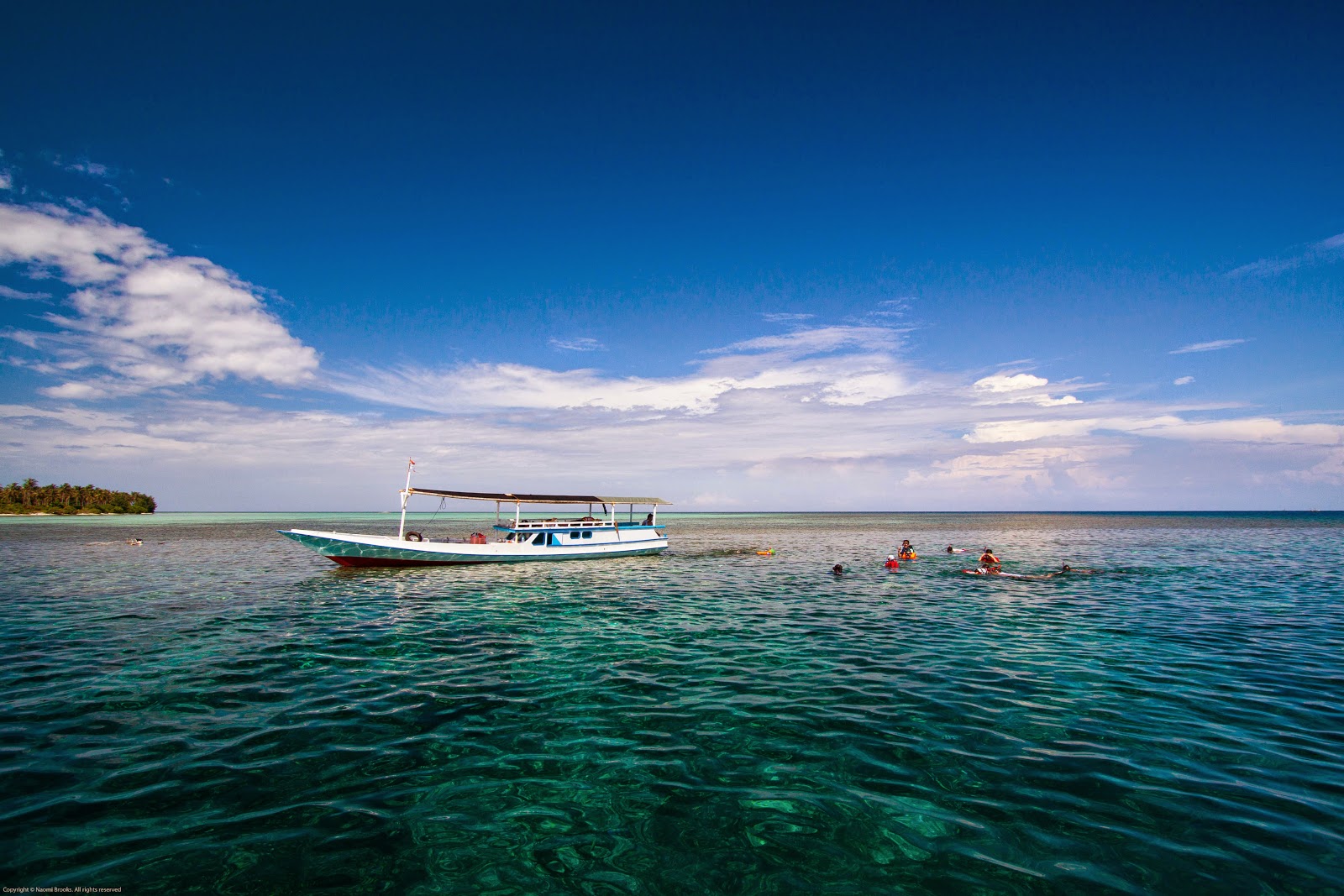 That evening we discover that my kidnappers have to return to Semarang early. All because a photo of Endy's is unacceptable and he must redo it. Presumably the only day it can be done is Tuesday, so instead of just Endy returning, they all cough up the price of the express ferry back to Jepara for Monday, and leave me!! But I have their phone numbers, we're all on Facebook, and I now have some very important contacts in a part of Sulawesi I was pretty keen on visiting anyway.

So now I'm on my own. It's Monday, which means the weekend madness is over and island life settles down until the fast boat arrives next Saturday. I'm looking forward to a few days cruising in paradise, maybe hire a bike for a day, or climb the nearby hill for sunrise or sunset. There's no hard sell here, no party atmosphere, prices are cheap and everyone is friendly. There's only electricity from 6pm to 6am, unless a generator is used, and you mandi a few times a day in cold water to keep cool. And there's as much fresh fish as you want to eat!! 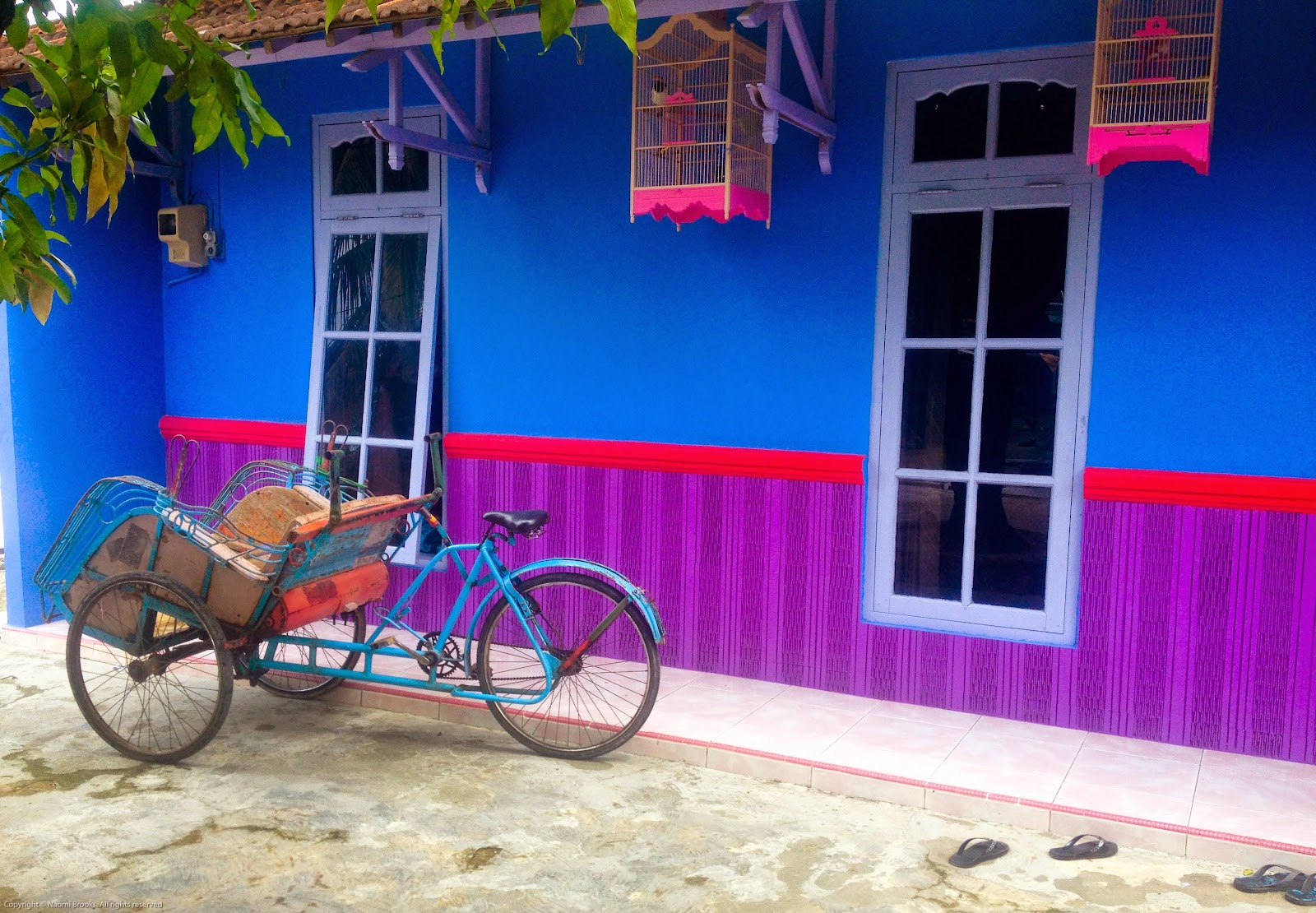 Yep, this is a holiday!