Visiting a friend who isn't there

After Dieng I jumped on a bus to Semerang. After the cold wet weather there, Semarang is a bit of a shock. It's hot and steamy, the sun shines from a blue sky all day, and there's no rain!! Let's just say I'm loving it!!

I'm staying at a friend's place. I met Mega 4 years ago in Pekalongan, and she gave me a ride back to Semarang on her motorbike. We've kept in touch over email and Facebook and I contacted her a few weeks ago to let her know I'd be visiting. She's also a couchsurfer and host. Since I met Mega a lot has happened to her, including the death of both her parents in a car accident. She's now working for international companies supplying Bali type furniture to the West. She has a store in Bali, and is over there at the moment running around for a client. I'm hoping to catch up with her at some stage.

Meantime, I've got a cute little dog called Snowy to play with. She's got a lovely temperament and she's smart and cheeky - we get on well!! She likes to sit in the drain outside at night and bark at passersby, which means she isn't so "Snowy" in the morning, more like "Muddy".... 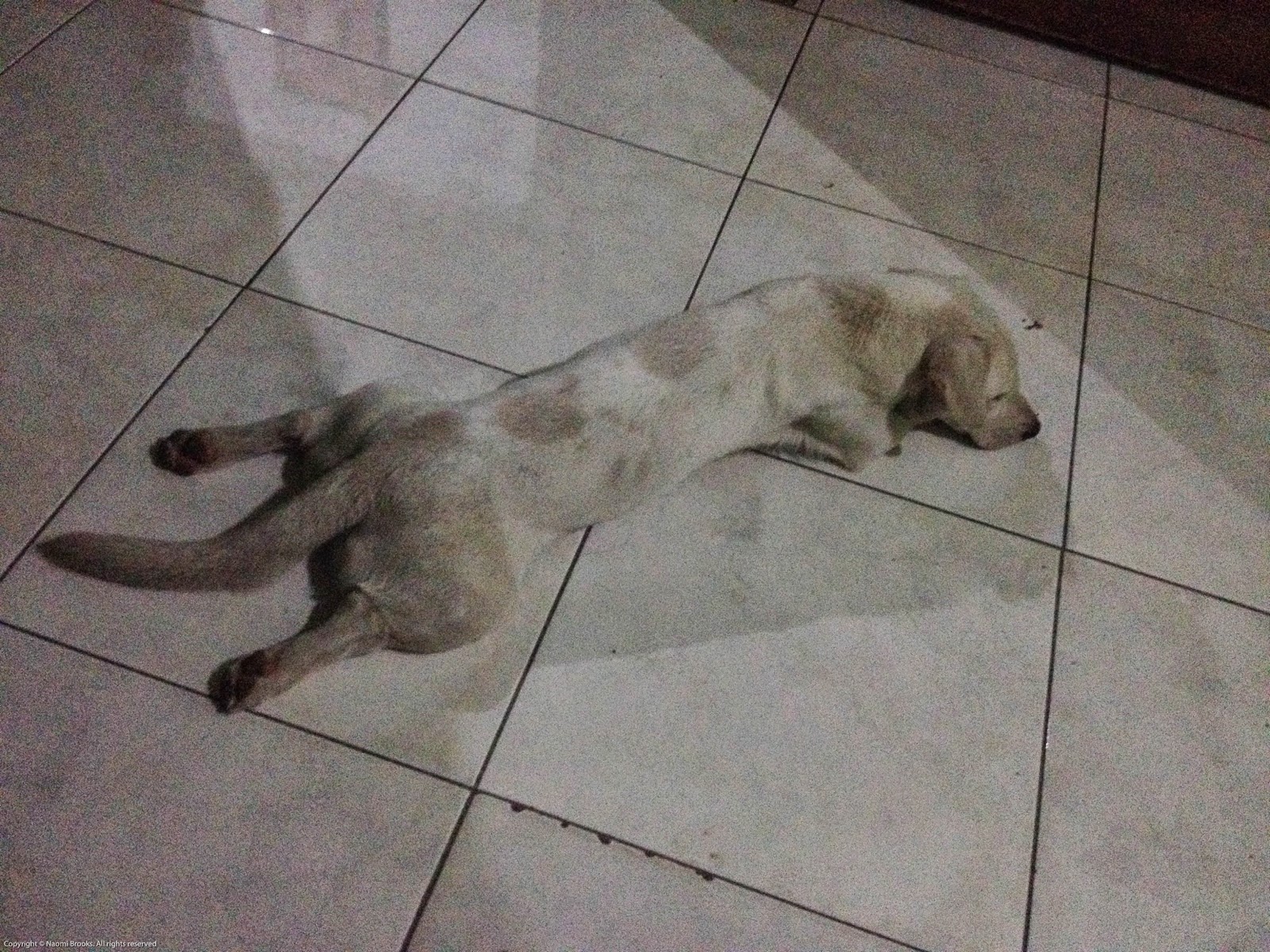 Mega's house isn't too hard to find, as it's about 500m down the road from the Genuk angkot terminal. It's just off a busy dusty road but you wouldn't know it. It amazes me how quiet the kampungs are, no heavy traffic just a few motorbikes going past and the kids calling out to each other, and to "Naomi" - didn't take them any time at all to learn my name...

I've got the house to myself so took the opportunity to do a whole lot of laundry and clean all my camping gear. There's also a surplus of paint shops up the road near the terminal should I need more fuel for my stove. Not that I've any more camping planned for the next week or so. Once the washing was done I headed into town. 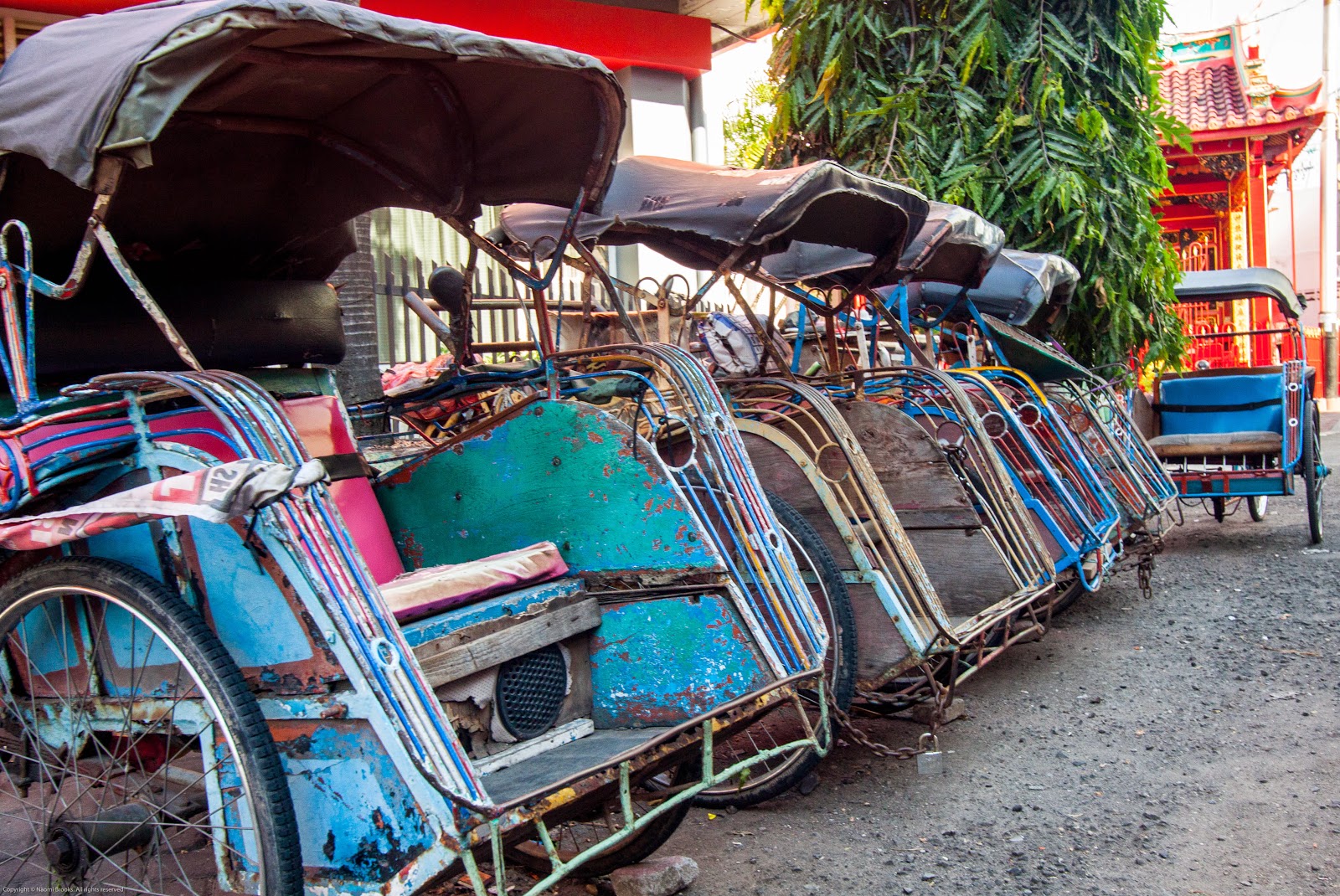 Last time I was in Semarang Ditya had shown me around the old town, known as Balai Kota, and the Chinese Temple. This time I got to do a whole lot more wandering. There's lots of old Dutch buildings here, including the old church, in fact there's quite a few Catholic churches and schools in the vicinity. 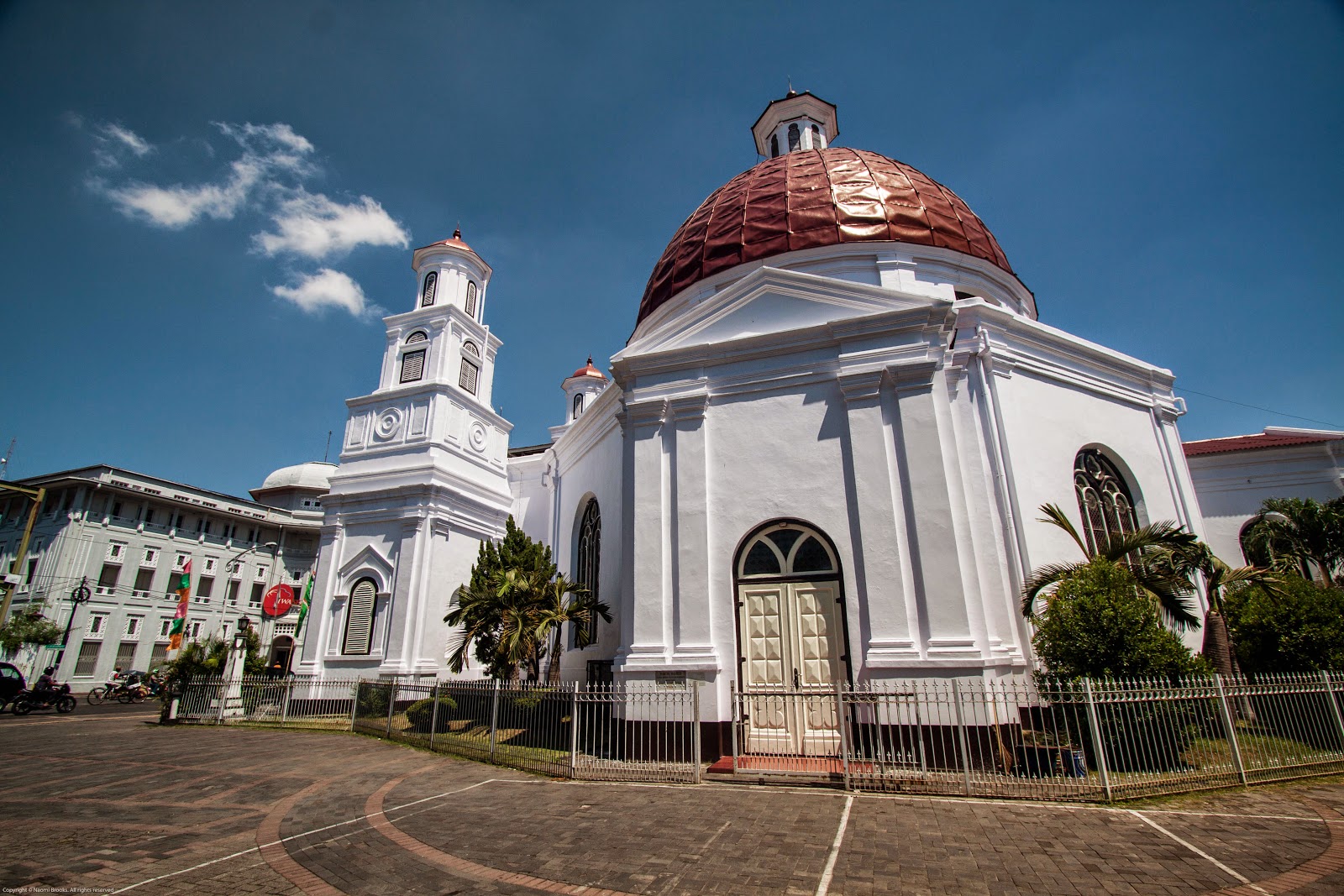 I'm liking Semarang a lot. I like that there are still lots of people cycling on bicycles, that there's less veiled women (maybe they aren't moslem, I'm not sure), and that there's places I can get Durian. The people are also very friendly and the place isn't frenetic. 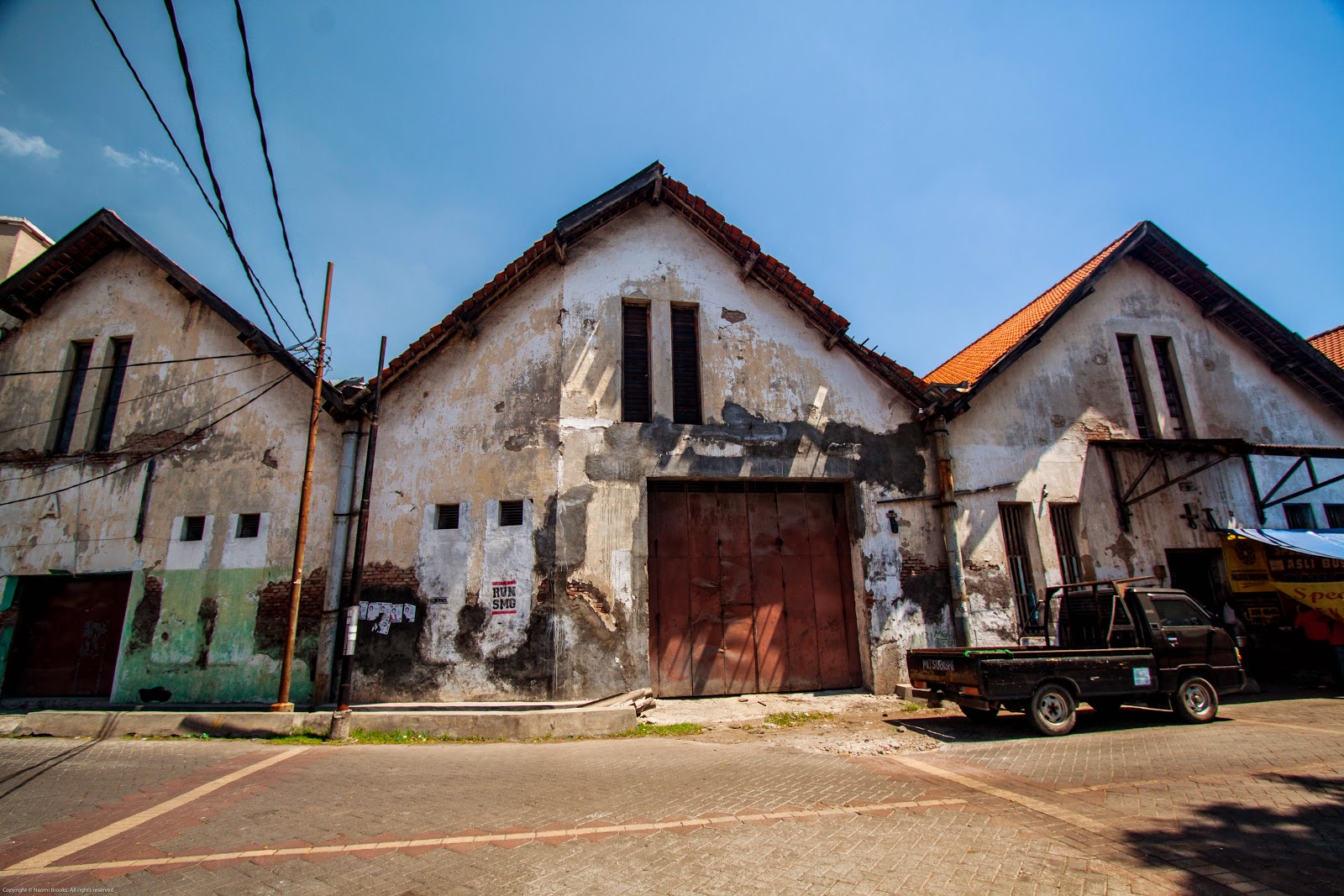 There's some pretty cool street art too, some that would give Banksy a run for his money. 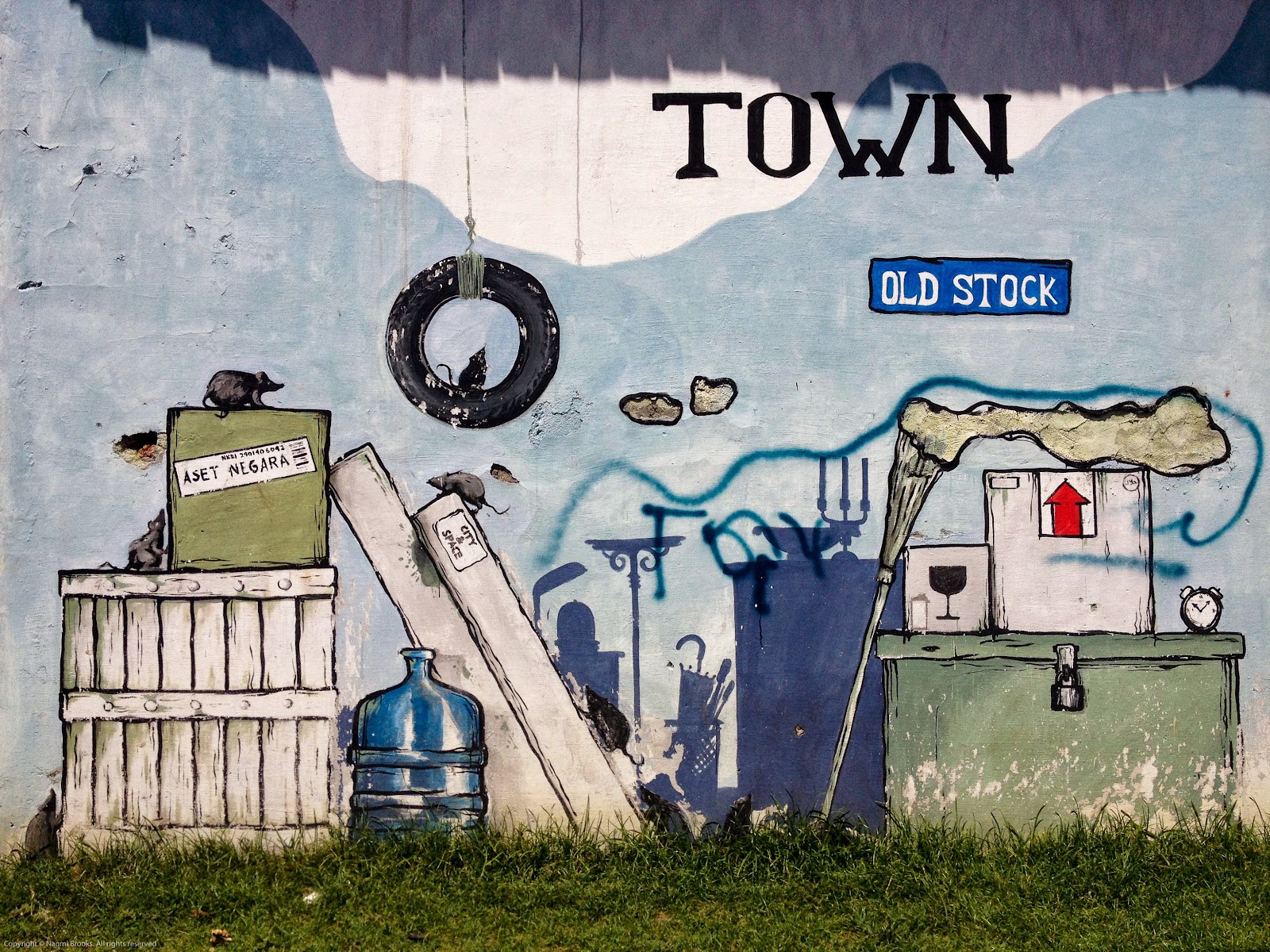 Just down from Balai Kota is Chinatown. Semarang has one of the largest Chinese communities of any city in Indonesia, but because Chinese have been persecuted and massacred in the past, the place doesn't look like your regular Chinatown with Chinese writing and lanterns and all that. Actually, there are quite a few lanterns, and there's lots of reflexology and Chinese medicine shops and there's a lovely working temple by a canal. I went here last time and had my fortune told. Didn't go for another reading this time though... 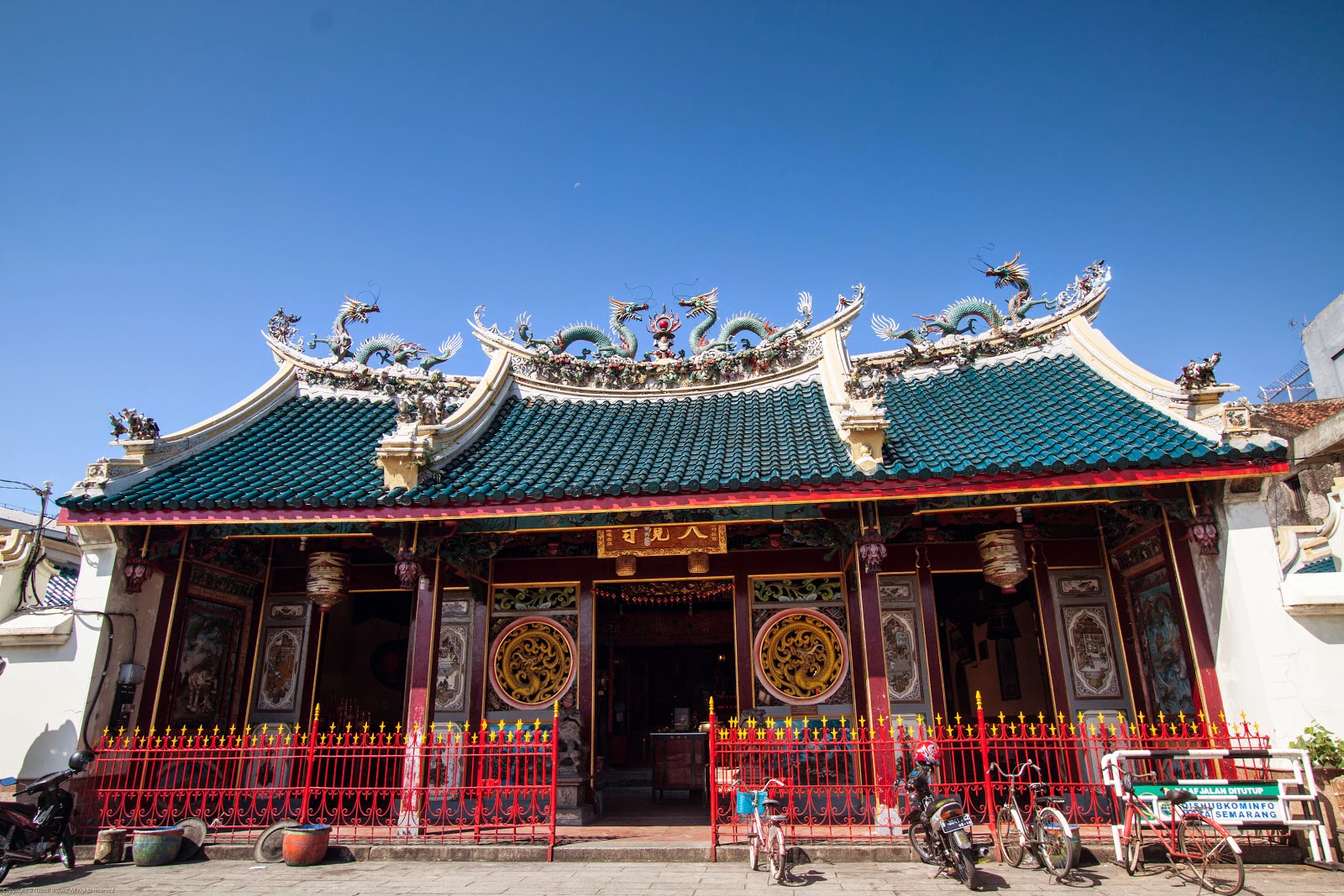 There's lots of really waif like people in Semarang, particularly amongst the Becak riders. Becak are bicycle taxis, and these people are some of the poorest people around. I also saw an old lady living in a small wooden box by the side of the canal, not much bigger than a dog kennel. I'm a little ashamed to ask to photograph them, but these people have such wizened faces that they interest me as portraits. Many of them are also begging for food. It feels exploitative to photograph them for money, gosh I wish I didn't have such strong morals... 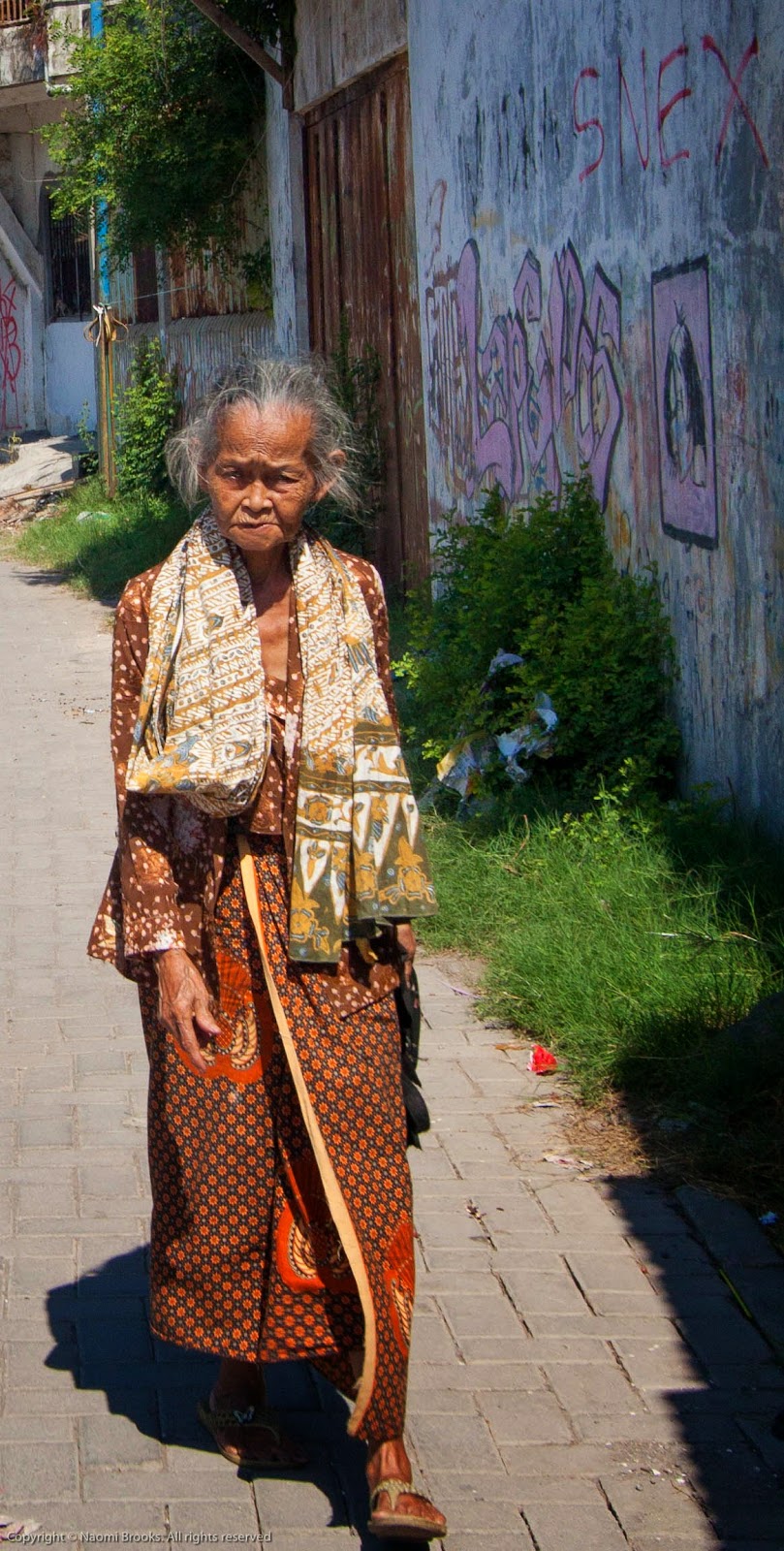 On my second day in Semarang I went to Lawang Sewu. This name is Javanese for "1000 doors", because there are a lot of them, maybe there are even a thousand! 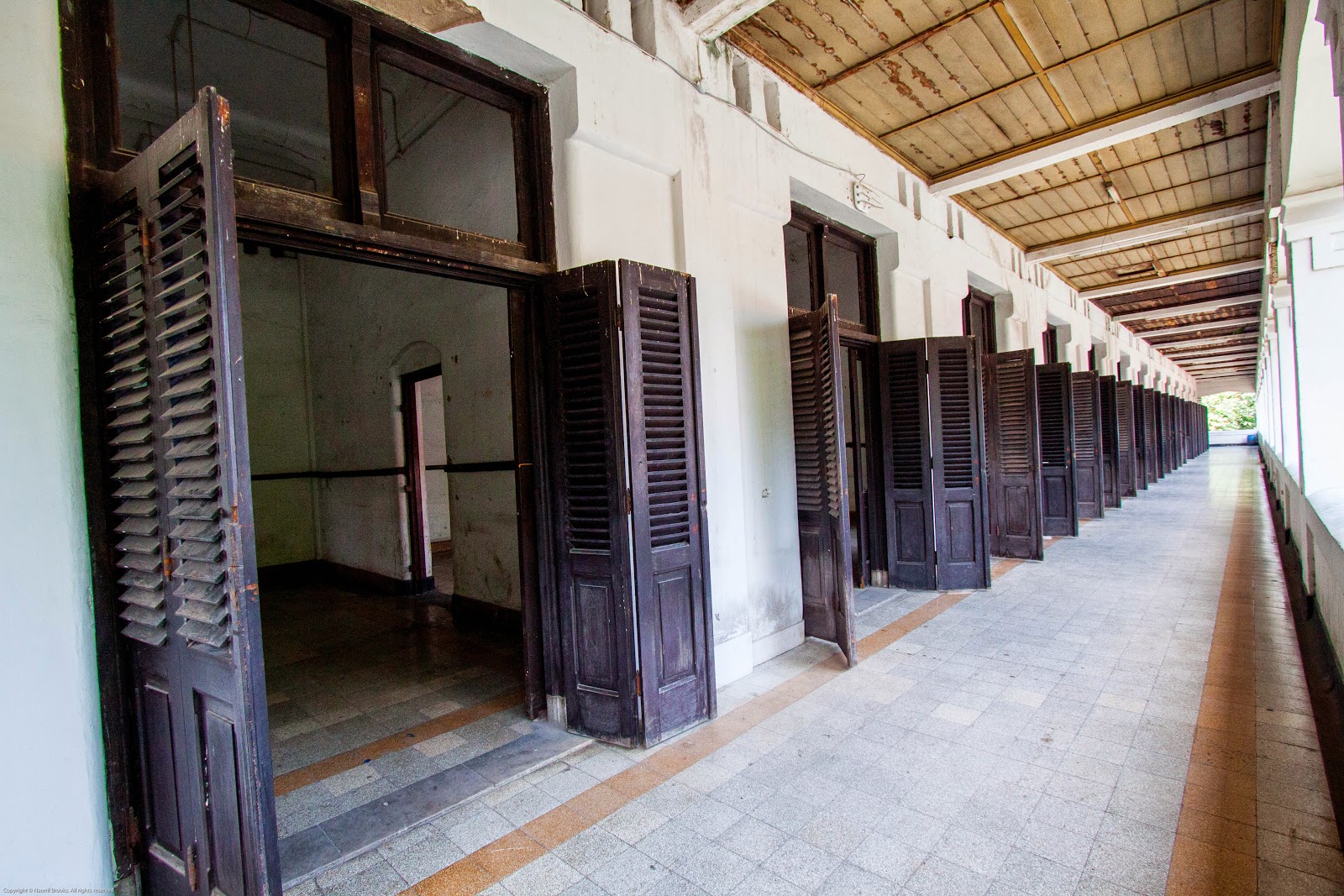 Lawang Sewu has a chequered history. It was built as the offices of the Dutch company NIS, which built the first railway in Indonesia. In fact Java owes its extensive rail network to the Dutch, who built lines to supply goods and produce to the ports for export. Aside from a couple of lines in Sumatra, Java is the only Indonesian island to have transport by train. There's a great old black and white Dutch silent film showing the trains running over bridges and through countryside, and featuring the stations, which shows you how uncrowded the country was 100 years ago. There are spaces between the houses!! There's also a bunch of beautiful watercolour paintings of many of the stations from throughout Java, and exhibits about the trains. 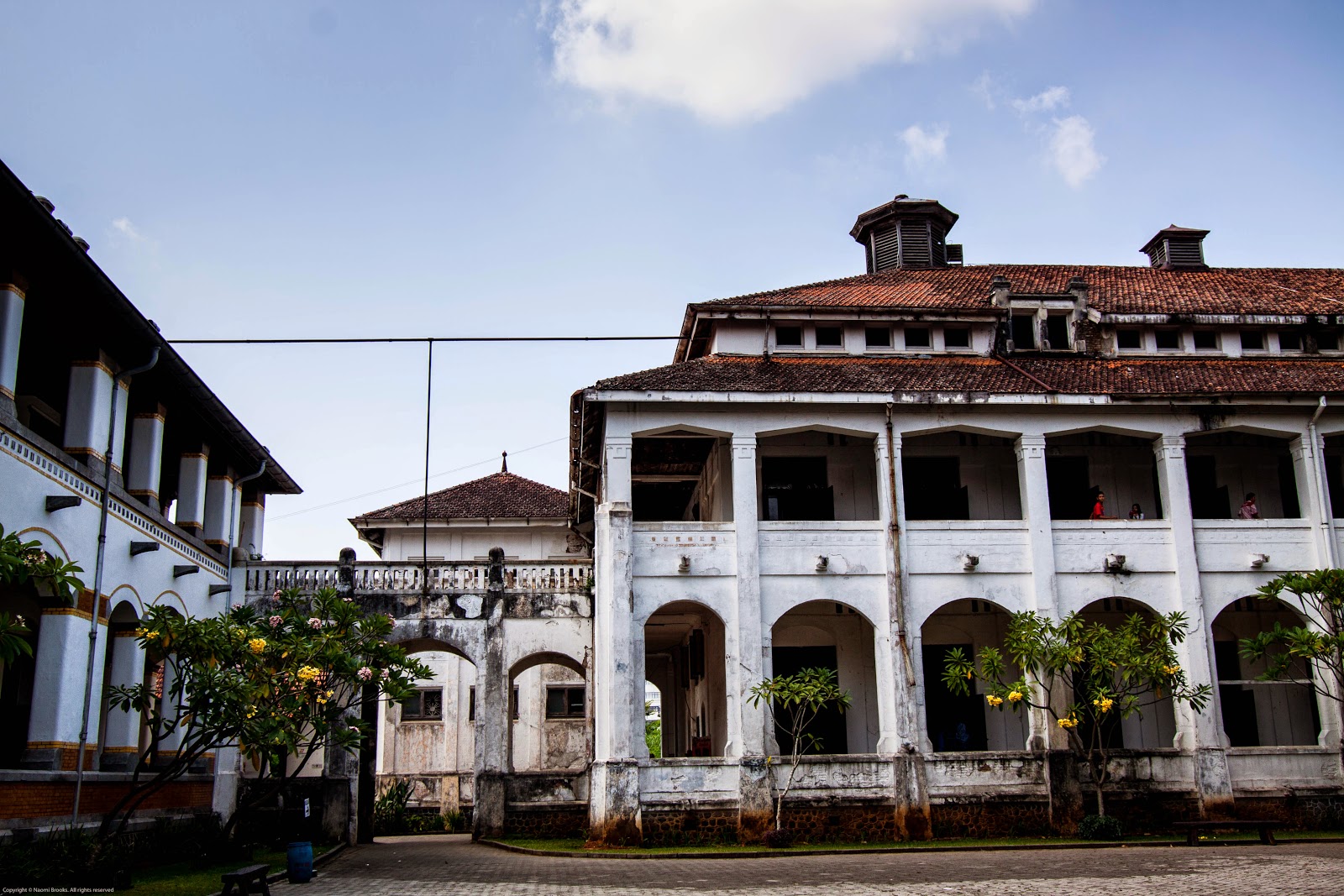 Lawang Sewu gained notoriety during the Japanese occupation of Indonesia, when it was used as a gaol and people were tortured there. Local legend says it's haunted. It certainly has a bit of an aura about it... 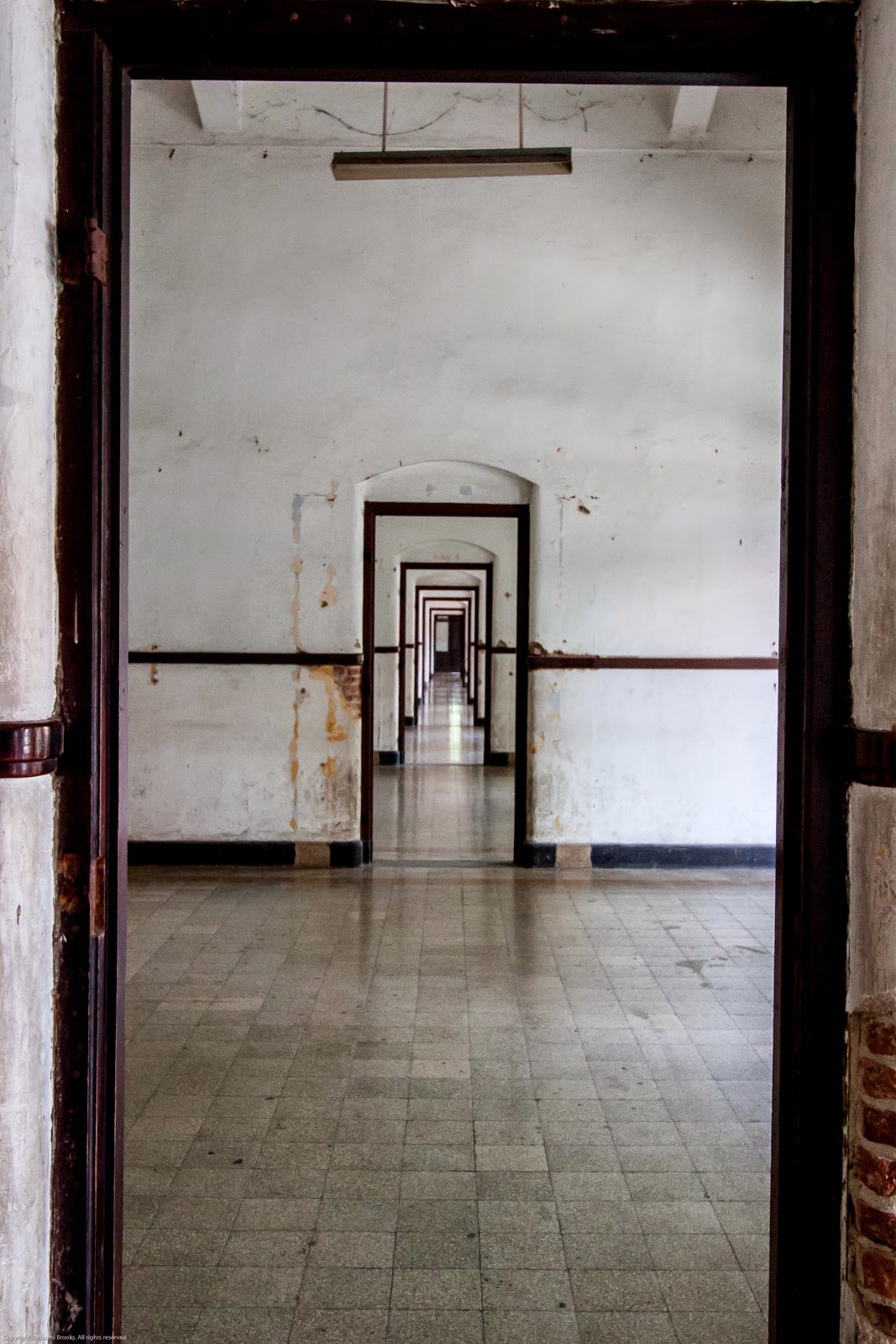 When I was here in 2010 it was a run down ruin with restoration just beginning. 4 years later, not all of the buildings are open for viewing, but the facade is essentially finished. You can wander around inside a couple of the buildings but the main office building is still under renovation. There's also a couple of train replicas outside. 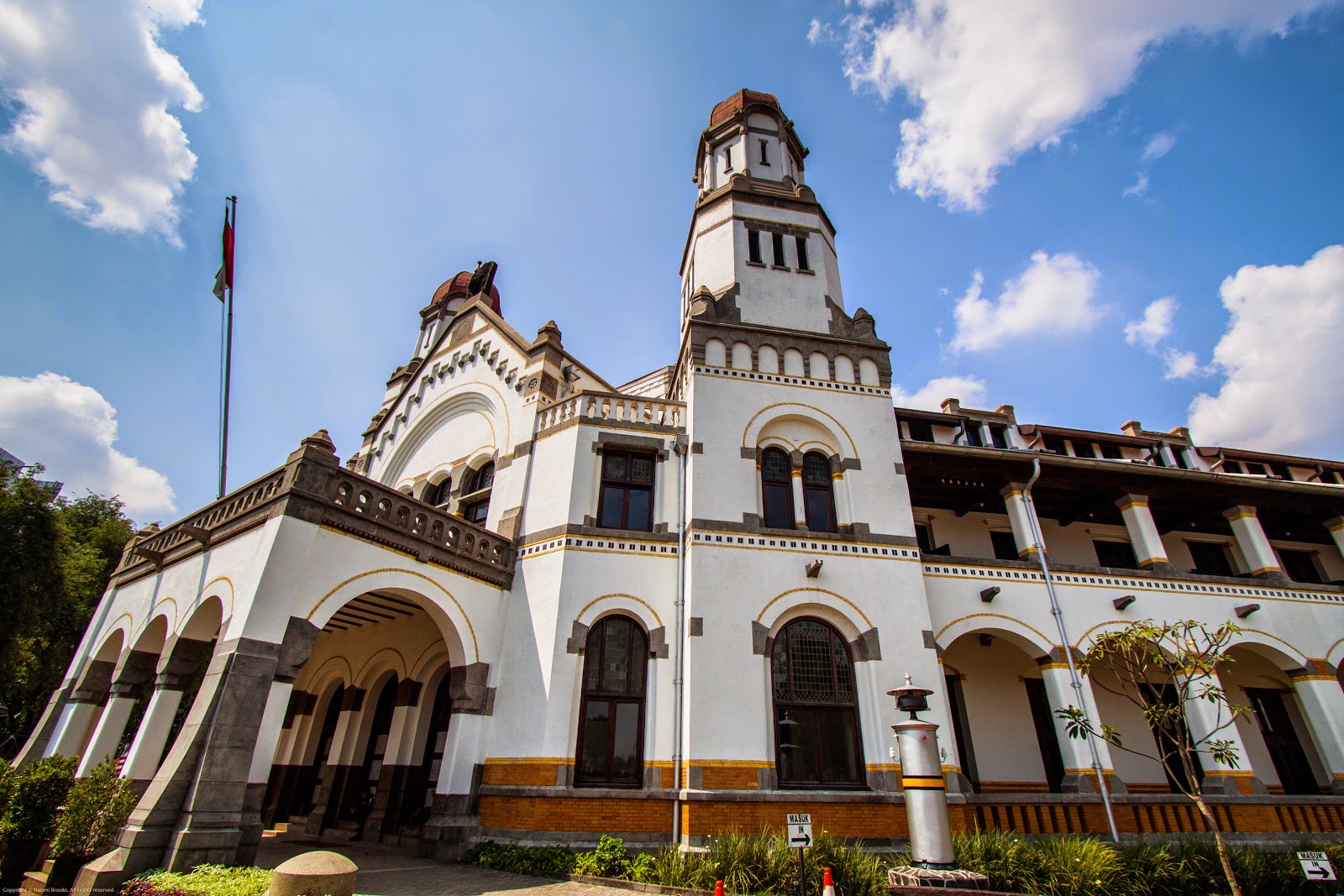 After Lawang Sewu I decided to take a wander back to the Pasar following one of the canals. Narrow lanes on both sides mean little traffic and you can wander from one local community to the next without all the noise and hustle of the main drag. I walked a long way, but nothing that an iced tea or coffee can't fix. I stopped in at Gang Lombok for lumpia for lunch for the second day in a row - they are essentially spring rolls, but very yummy ones! Judging by the long line of locals queuing for them, I'm not alone in my appreciation of them. 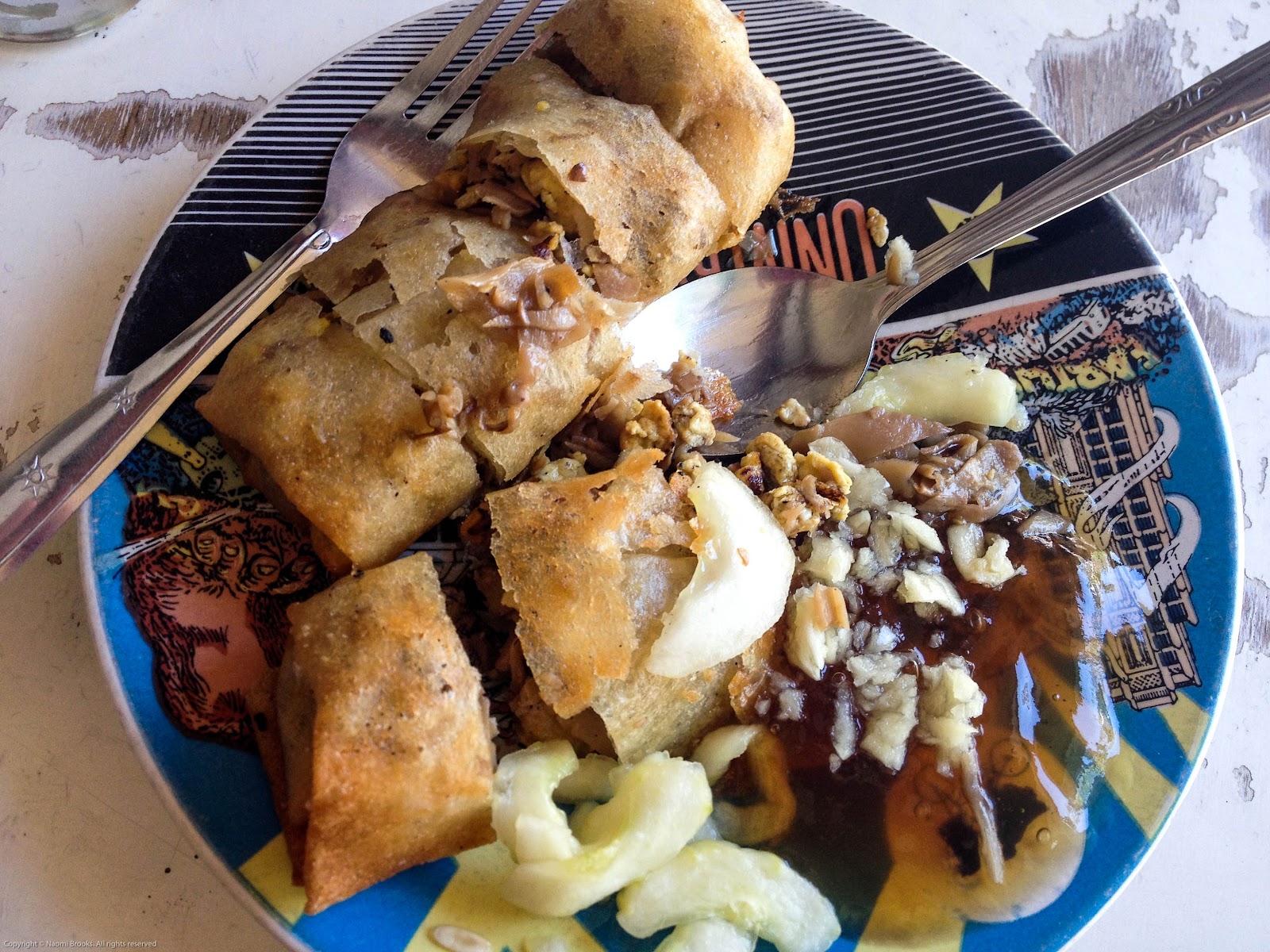 Back at the Pasar I indulged in another yummy sweet dessert called Es Dawet. It's an amalgam of various sweet things, including Durian, then topped with shaved ice. It's delicious, sweet and refreshing. 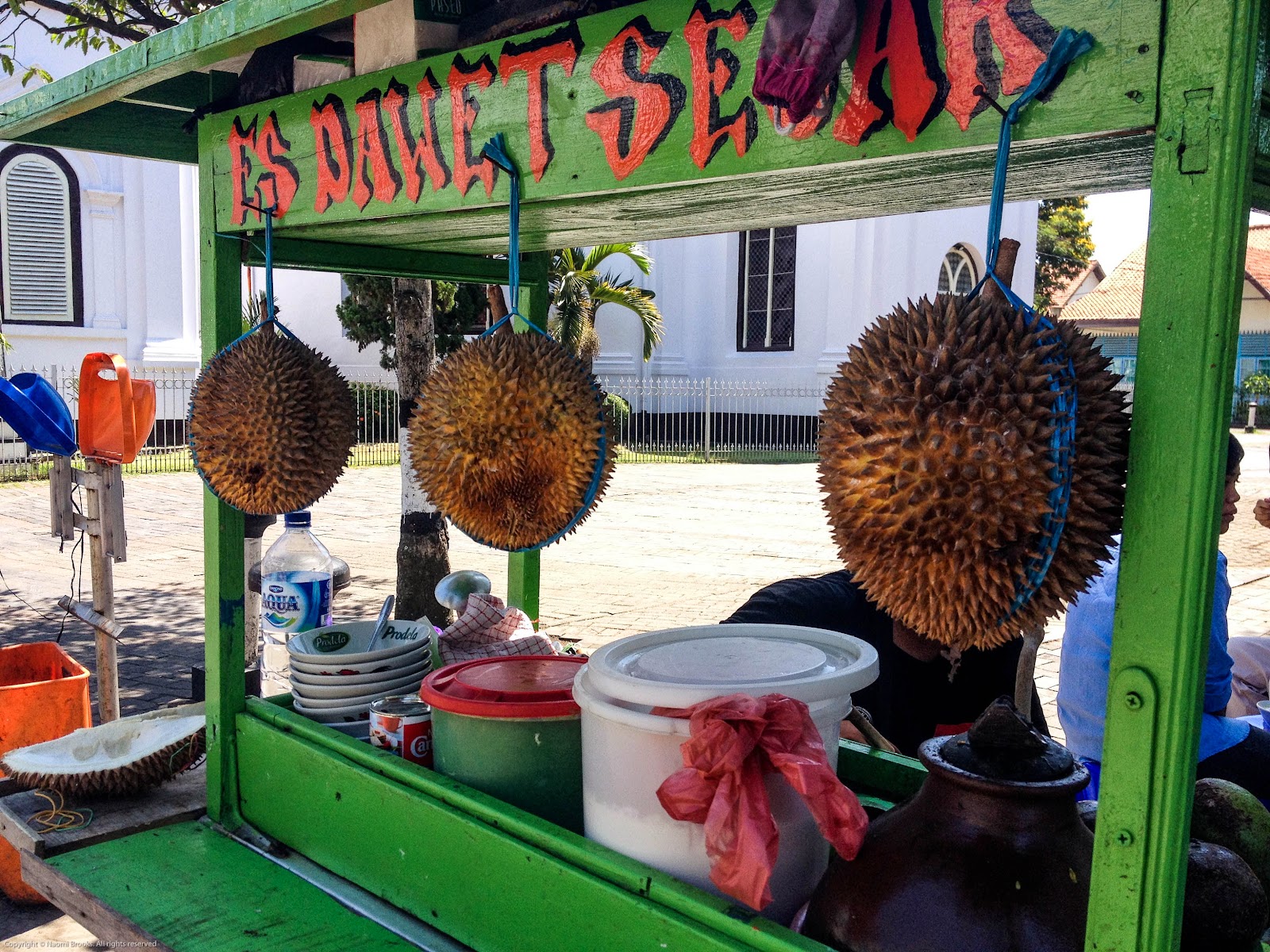 That evening Mega at last arrived back from Bali. As she spends her time sourcing products for international clients she sometimes needs to stay longer than planned fulfilling their demands. I was glad to see her though, as I'd kind of run out of things to do beyond aimless wandering through kampungs.... 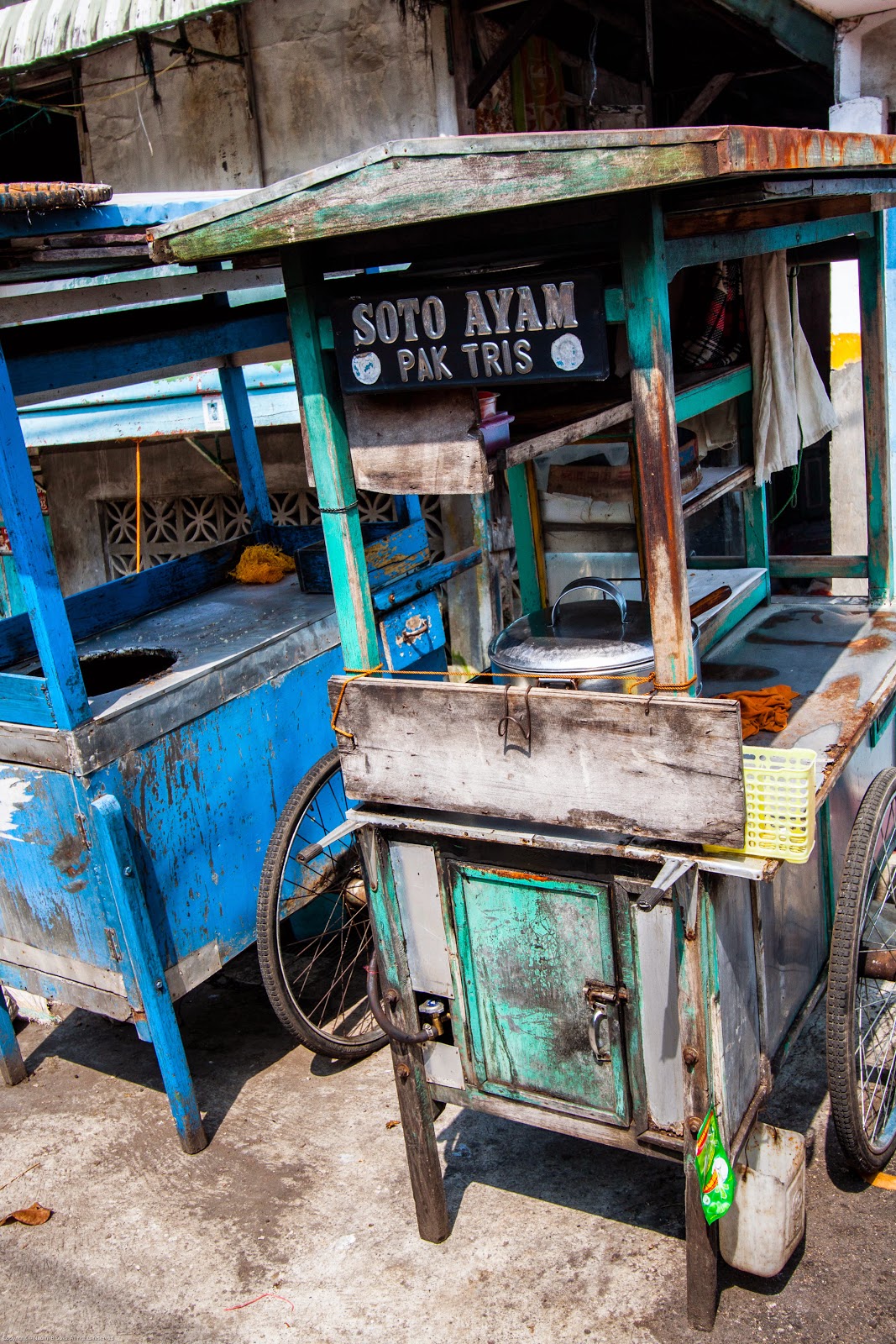 So the next day I did nothing, besides sleeping in, internet surfing, editing photos.... before we headed out to the posh Elizabeth Hospital in the hills above Semarang where an expat friend of Mega's was recovering from his first bout of Dengue fever. I have been bitten alive by mossies in the last day or so wandering along the canals, let's hope I don't end up with the same... 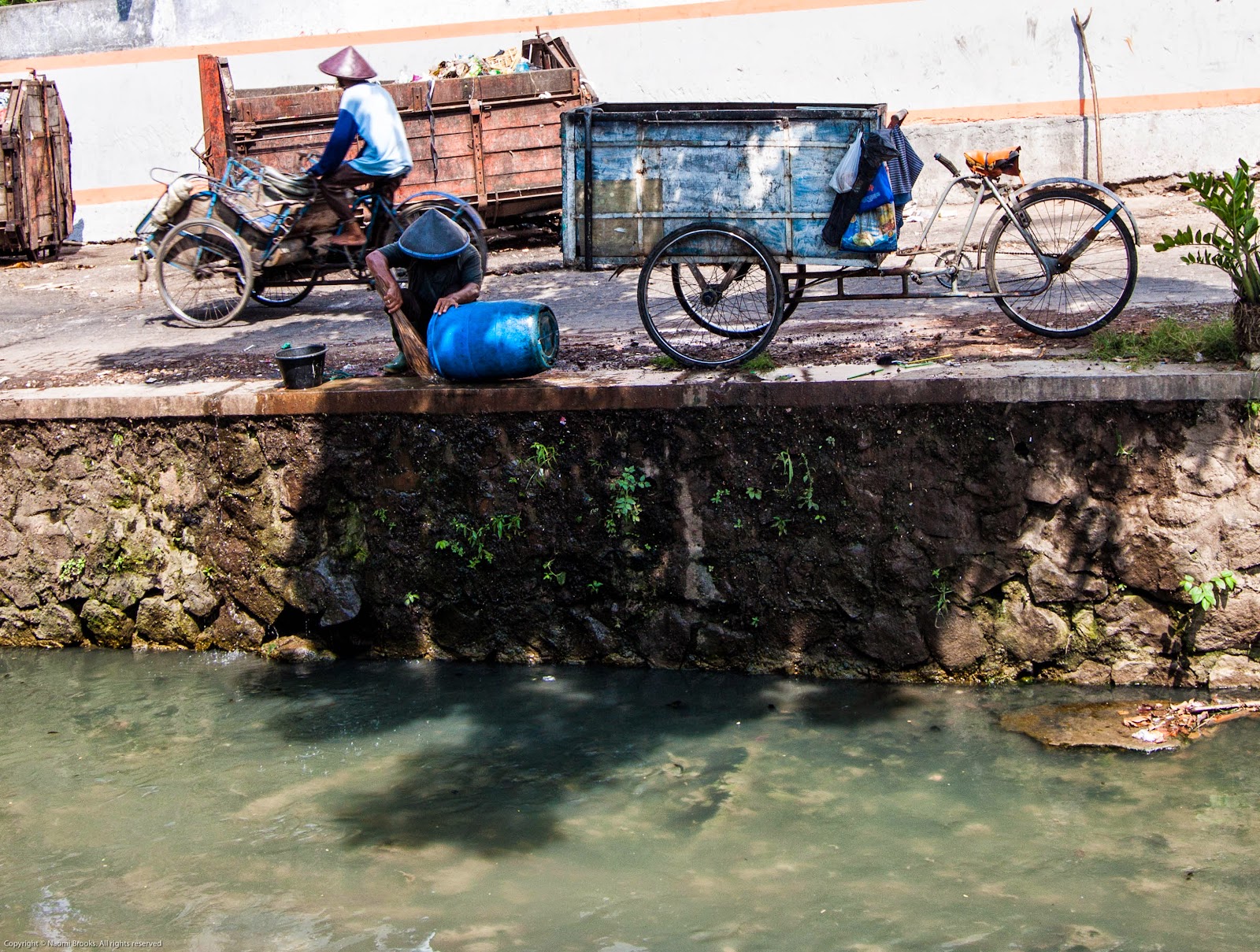 After enjoying the air conditioned comfort of a hospital room we emerged into the sweltering evening and headed back down to town. Mega took me to a great Bakso place where they serve all the different beef offal along with the meatballs. It was pretty scrumptious. Reminded me of a hot pot meal in Vietnam when poor Joe was recovering from Dengue! 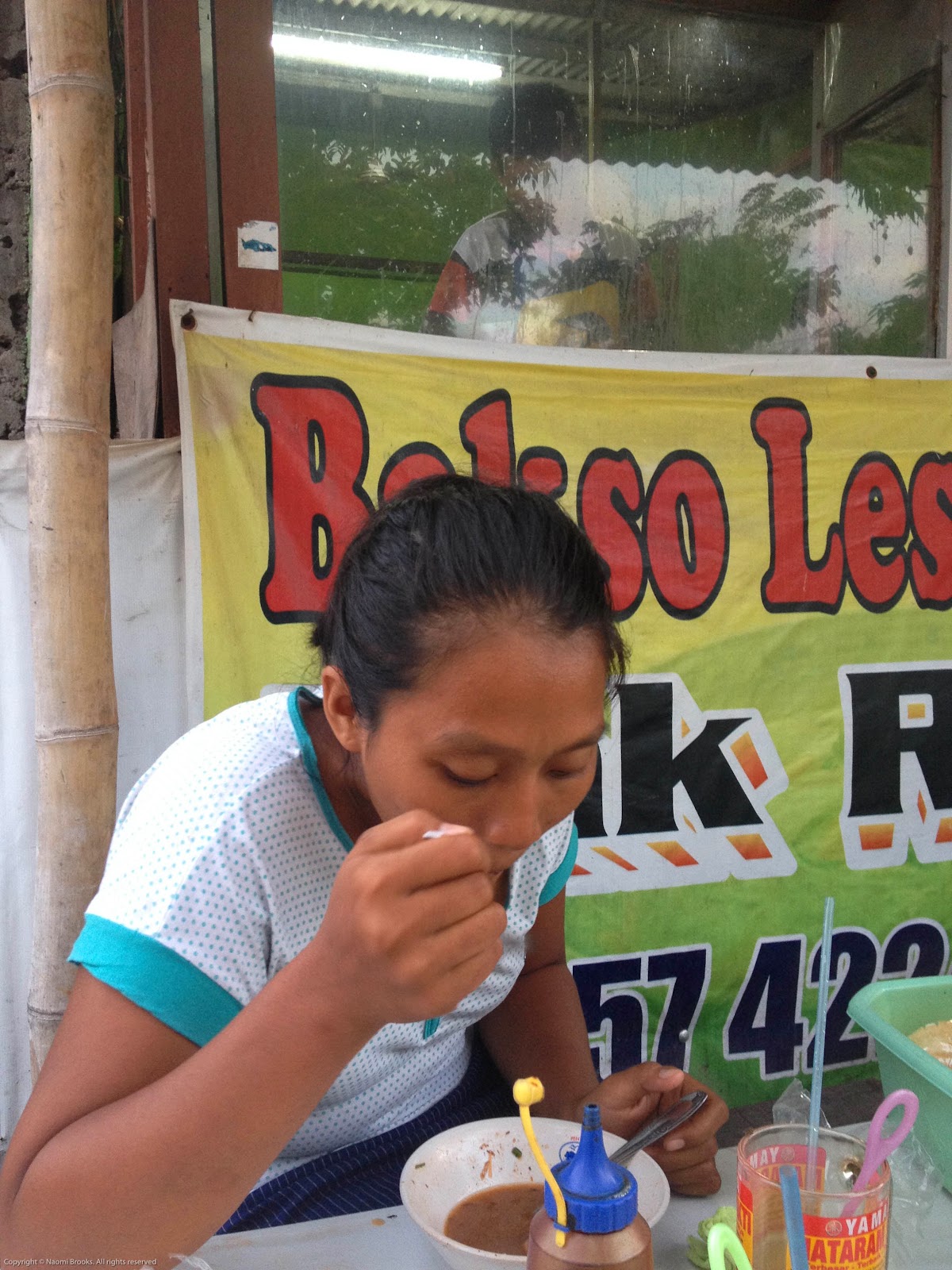 The next day Mega took me to Jepara on the back of her motorbike. I'm couch surfing at the house of a lovely lady named Anna, a local married to an Englishman. But tomorrow I'm off for a few days on a ferry to some tropical islands. Yep, little old me is beaching it for a few days...

See you when I get back!

The rest of the Semerang photos are here.