Reuse, recycle, and be creative

This weekend I decided to do something I've wanted to do for a long time, which is to create something from green branches. We've all seen those awesome sculptures made from willows, but I'm not really into buying in materials to make something. I'm much more into finding new uses for things I already have, or something someone else doesn't want any more. Not only is it me doing my bit for the environment, I actually get so much pleasure out of the process. Something you might have thought was junk I can find a new use for.

It's not just because acting responsibly when it comes to waste and the environment is a core value for me, it's kind of become a guiding principle. It started in the front yard, and it's pretty well taken over my life. If you're into stark architectural garden elements and everything looking beautifully manicured and "modern" then you might struggle in my garden. But if you like quirkiness and the junkyard feel, you'll be totally at home.

I'm not sure which came first, the cut down tanks or the arch made from an ex ute canopy, but it wasn't that long before there was a definite theme in the front patch: everything had to have a past life before finding a new home in my yard. Sure there's a few exceptions, like posts, shade sails and a few pots, but everything else started out somewhere else before ending up being incorporated into my garden. 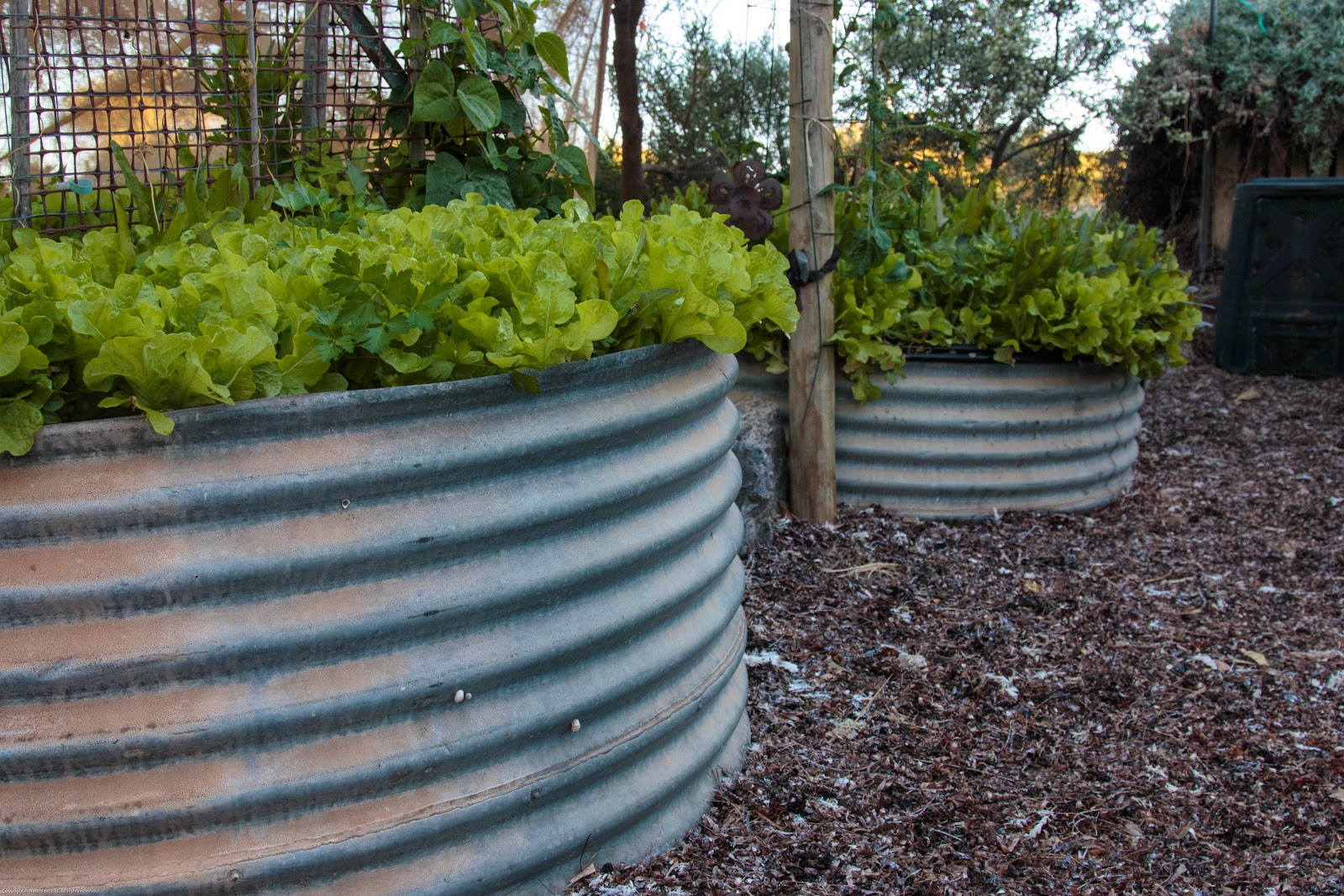 There's the entry sign, made by friends down the road who've now retired to Cocos (Keeling) Islands, who probably understood my nature well before I did! 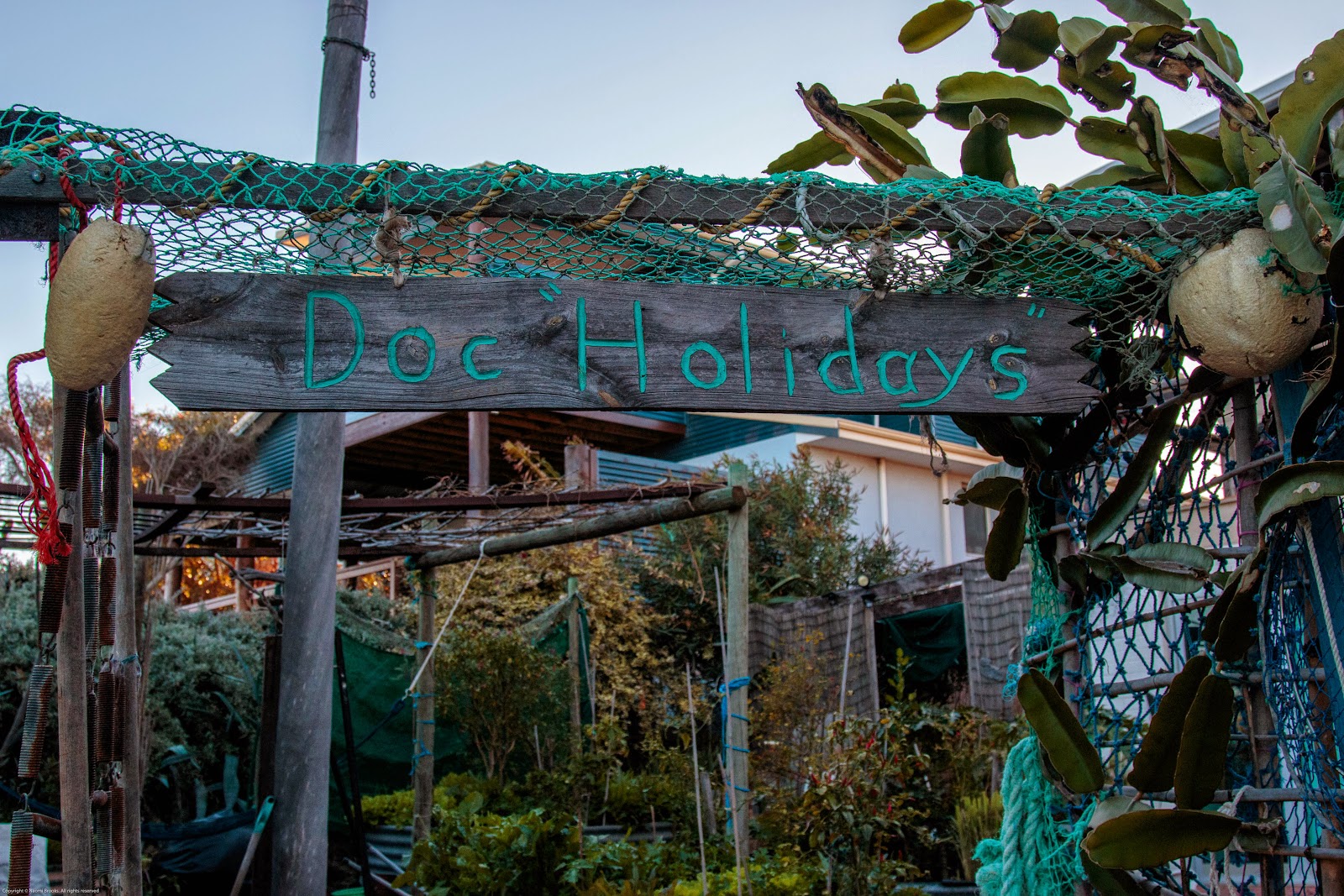 The pavers that are all donated, though there may have been a bottle of Bourbon purchased in gratitude. 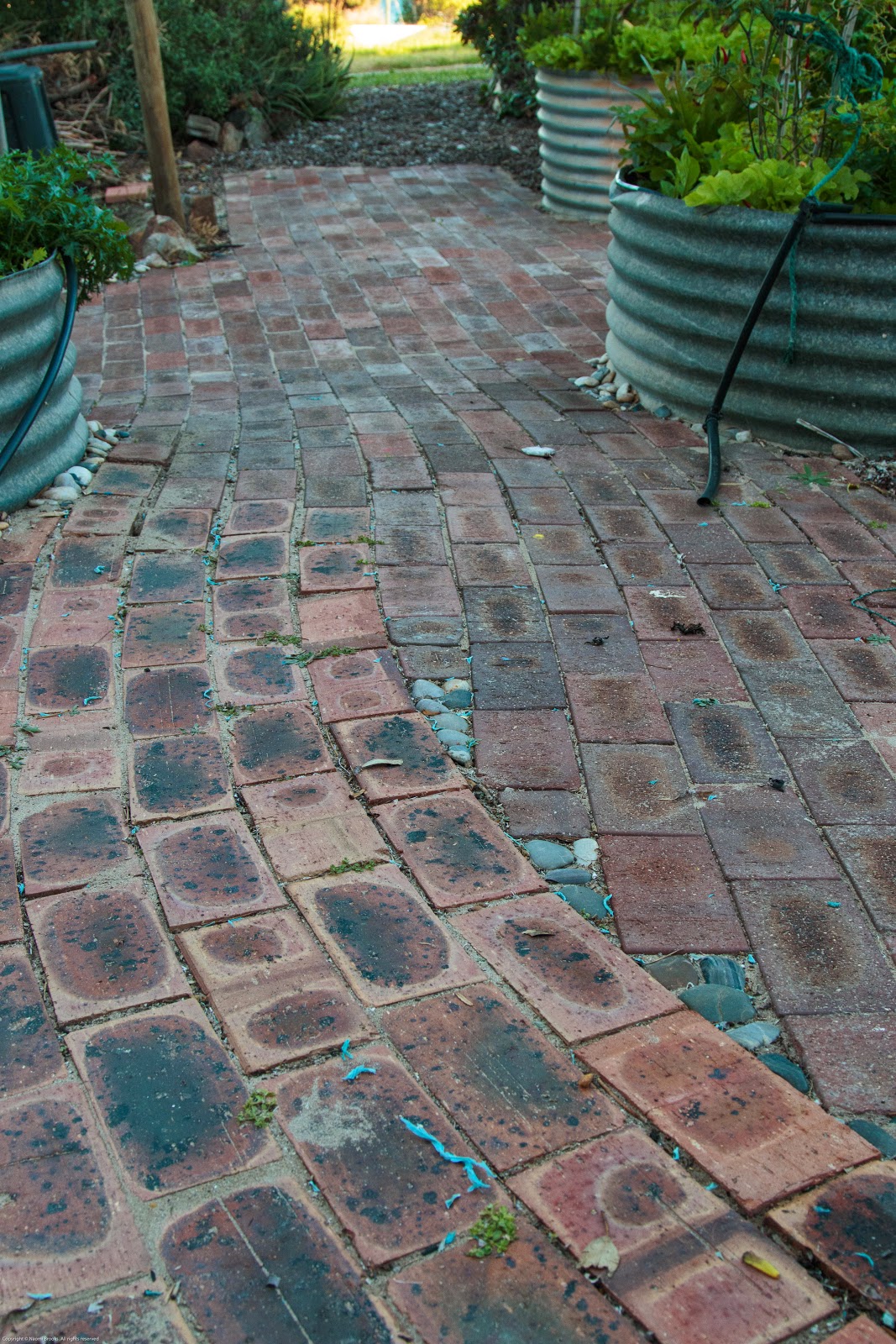 The new cucumber trellis is a combination of a frame that used to support a false floor in my car, some fishing net that washed up in a big pile on the beach, and some old skis. I'm not sure about the skis, I think I could find a better use for them, maybe as mini shelves somewhere. I'm not really very happy with this section of fencing yet, it looks a bit grungy but it serves a purpose. 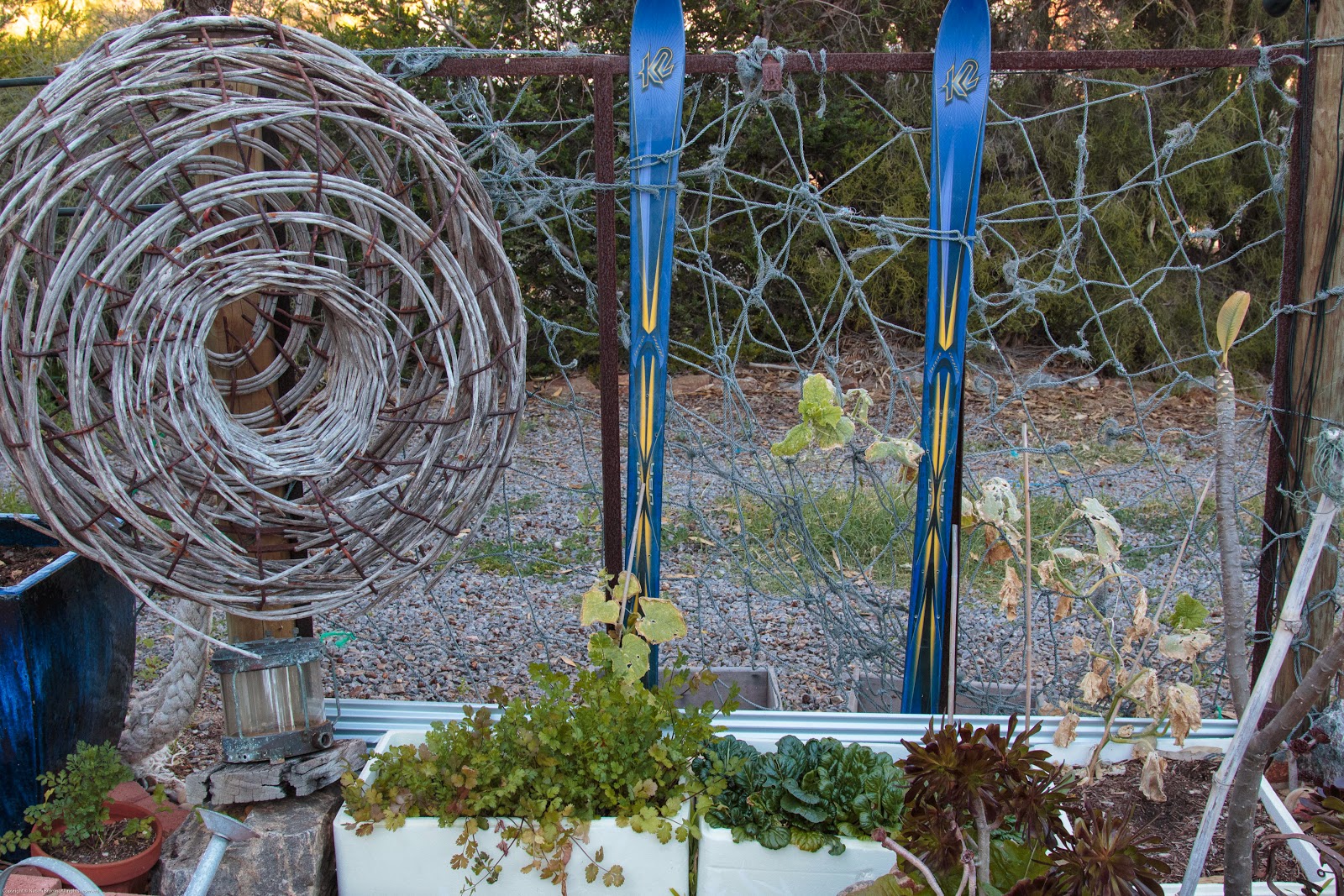 Of course there's the freaking awesome hall of fame windsurfing fence. That F2 Sputnik used to hold the world speed record!! Well not that particular one, but one the same as it... 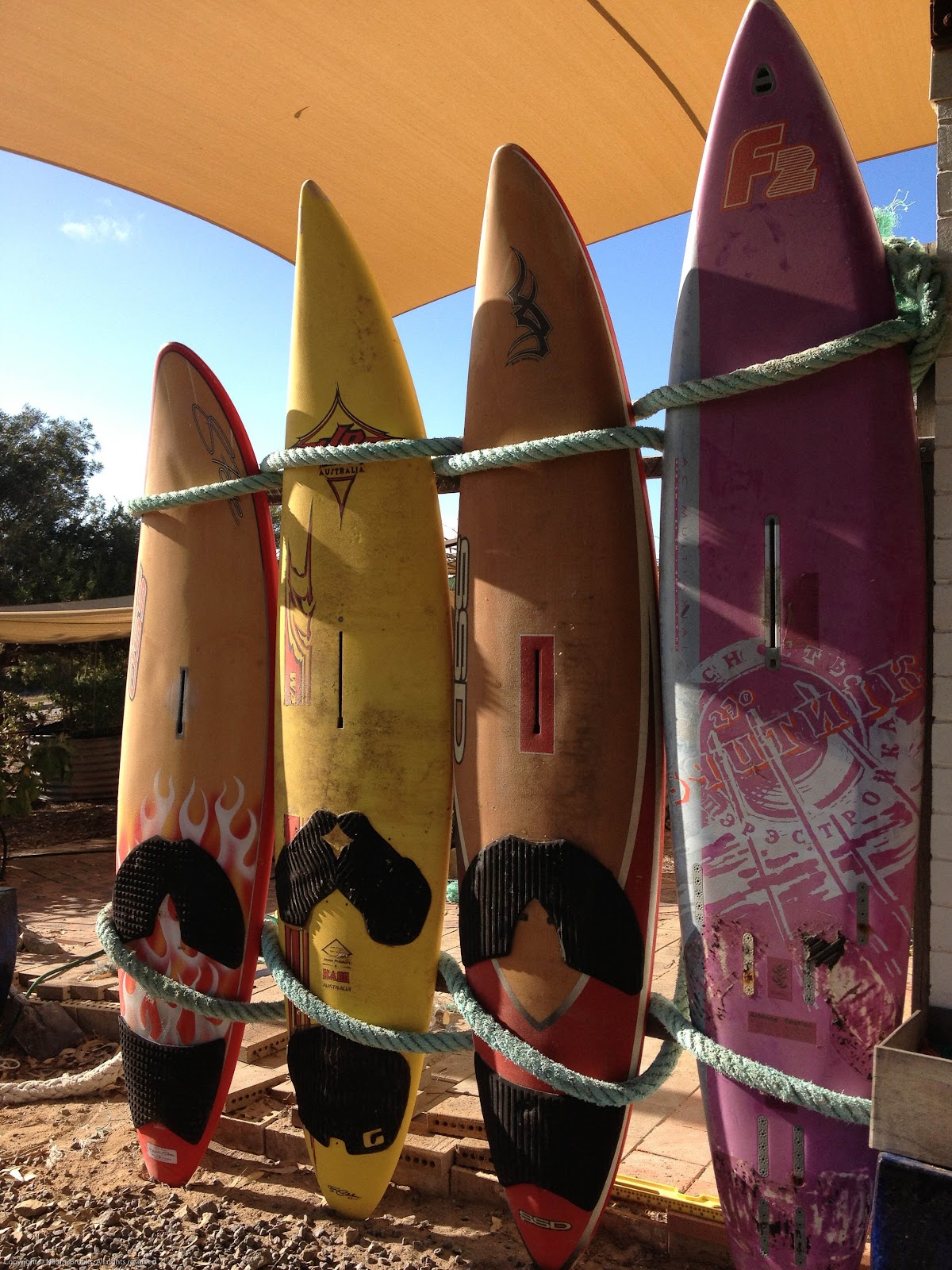 And there's the monumental Great Wall of Drummonds... 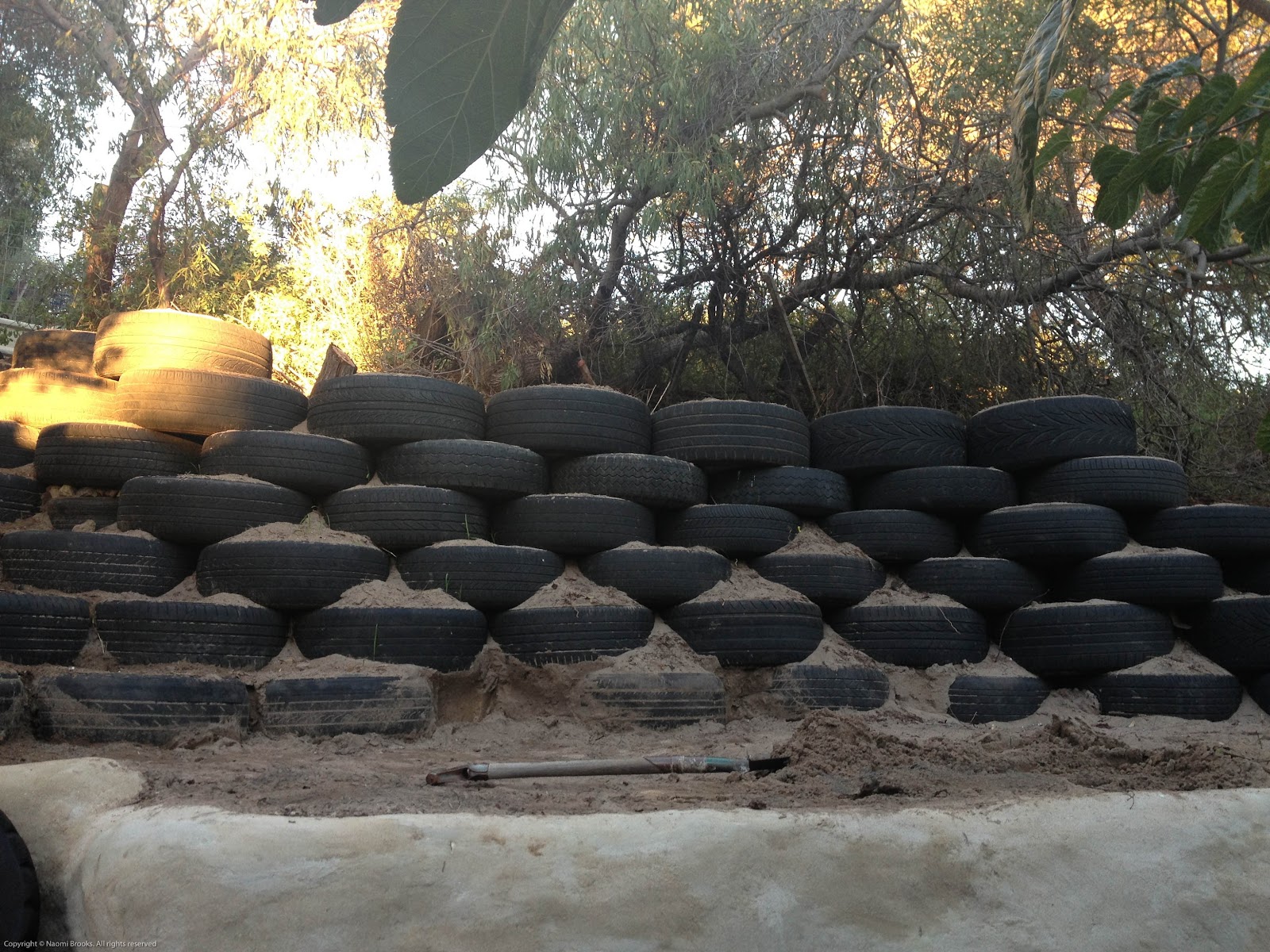 Which brings me full circle, because in constructing the great monument to halting the movement of sand from the top of the hill to the bottom I also decided to build a pizza oven. Yes it is likely I will actually buy proper bricks for this but since most of the backyard will be held back by rendered over waste products I reckon I'll end up ahead on the green credentials. Yeah even the sand for my render is sourced on the property!!

Currently growing on the future site of the pizza oven is a large mulberry tree. Which needs to be sacrificed to the marching chainsaws of progress. Oh no!! 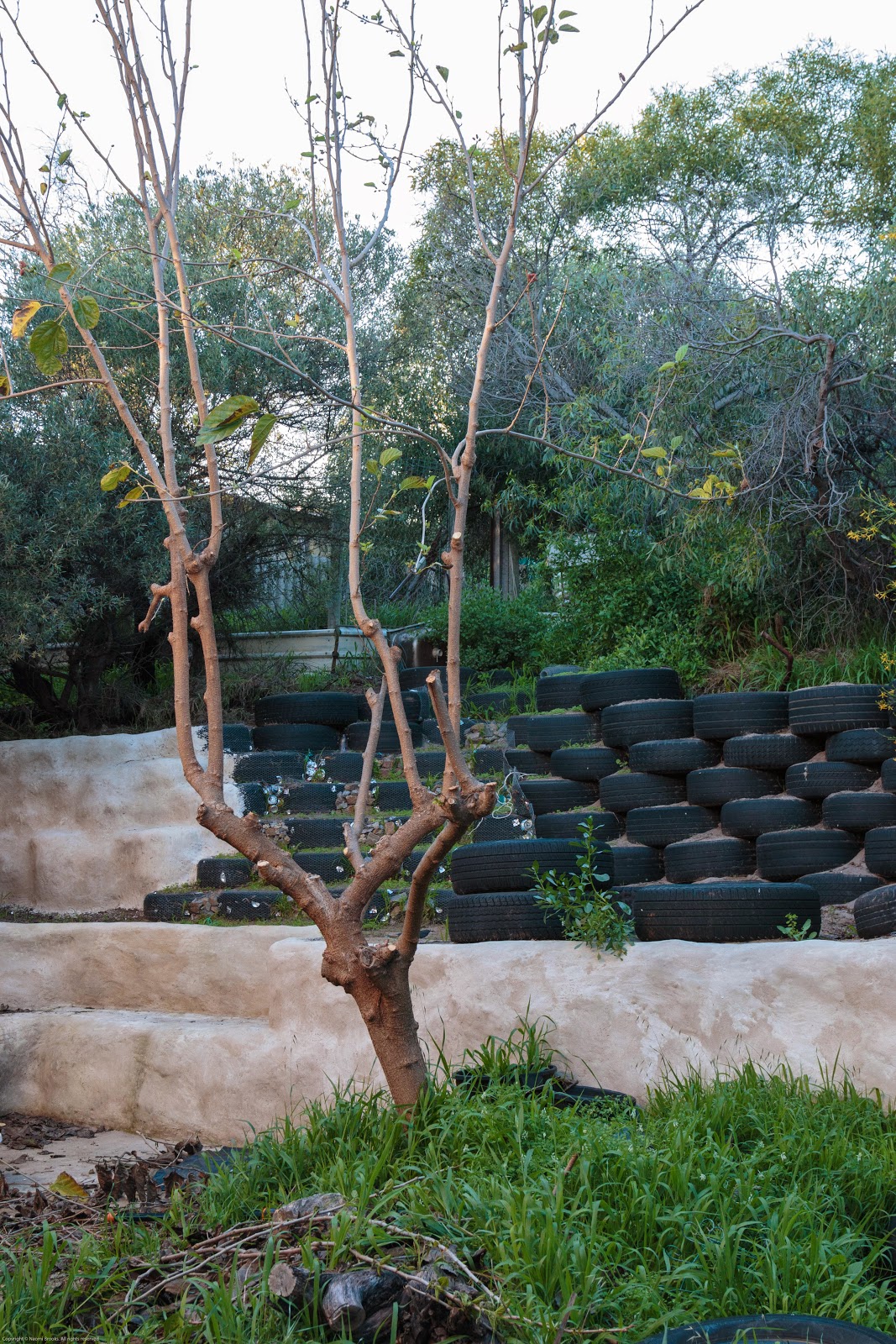 The mulberry is far too close to the house and my washing line for comfort. Most of the year it's just a nice shady tree, but for a few months it stains everything in sight with those purple berries. It needs to go somewhere a little less intrusive.

First I took cuttings, and they are going well, and hopefully I'll be able to plant a new tree in the next 6-12 months once the roots grow a little more. But now the mother ship has to be let go, massacred to make way for the next new thing in garden design. Yeah, what self respecting person doesn't want a wood fired pizza oven in their outdoor entertainment area?? 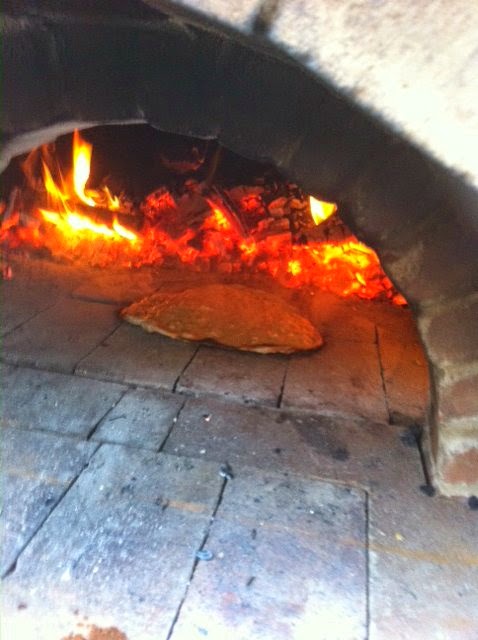 I began to heavily prune the branches, because I had a plan. Most of the canes are pretty straight, a few kinks and curves, but mostly they grow with offshoots coming off the central branch, which can be pruned back to give me my raw material. They're still green and springy, so they can be twisted and moulded a little without breaking. 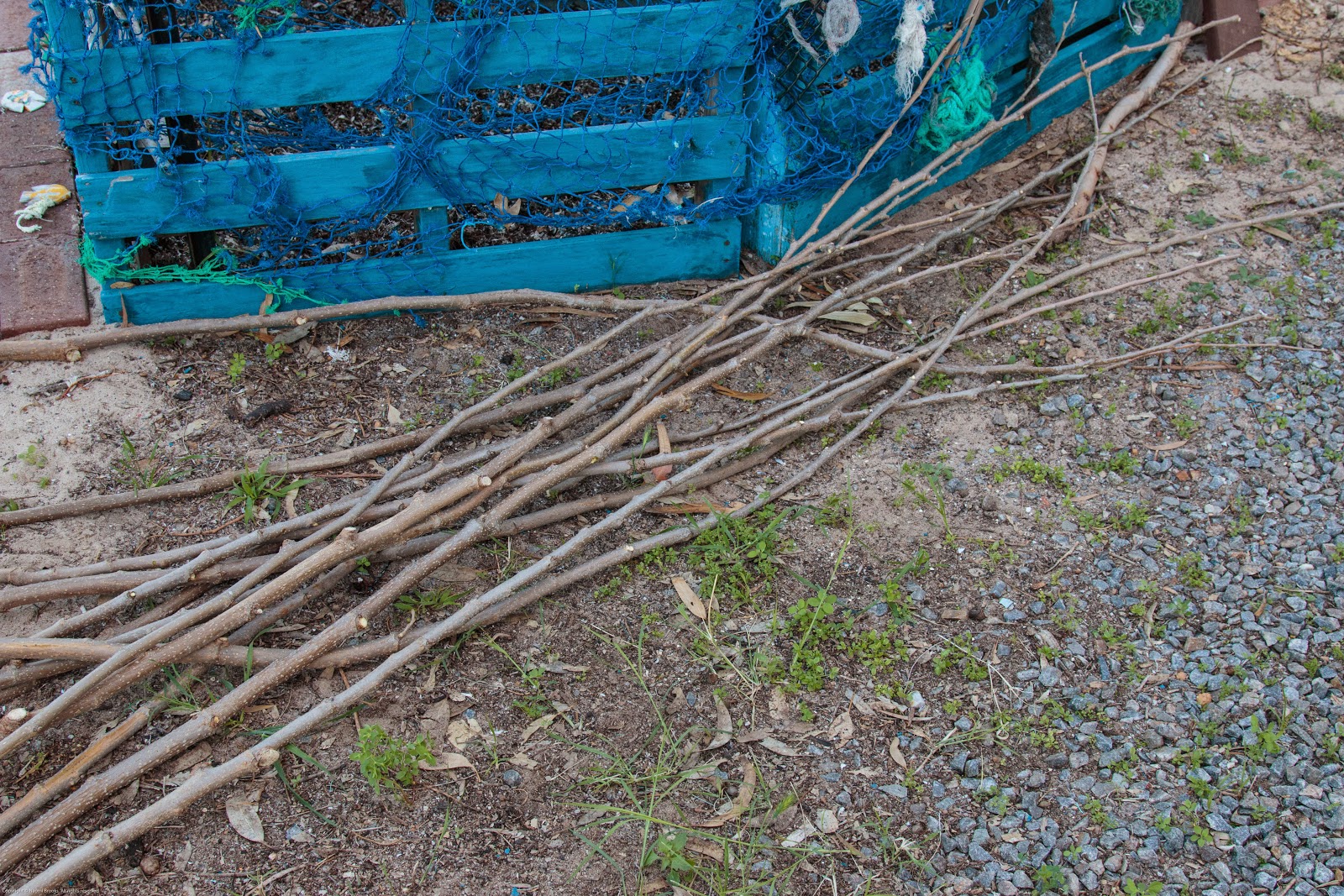 I decided to make a gate across one of the garden entries. I love walled gardens and have been slowly trying to create that type of ecosystem in the vege patch without resorting to solid walls - I want the wind to still circulate air, just not blow everything to bejesus! Plus solid walls create turbulence...

I collected the branches, laid them out and then began screwing together a basic layout for a gate. I then weaved smaller canes in and around and tried to create something a little whimsical. I'm creative, but I'm no artist, but I reckon this didn't turn out too bad. 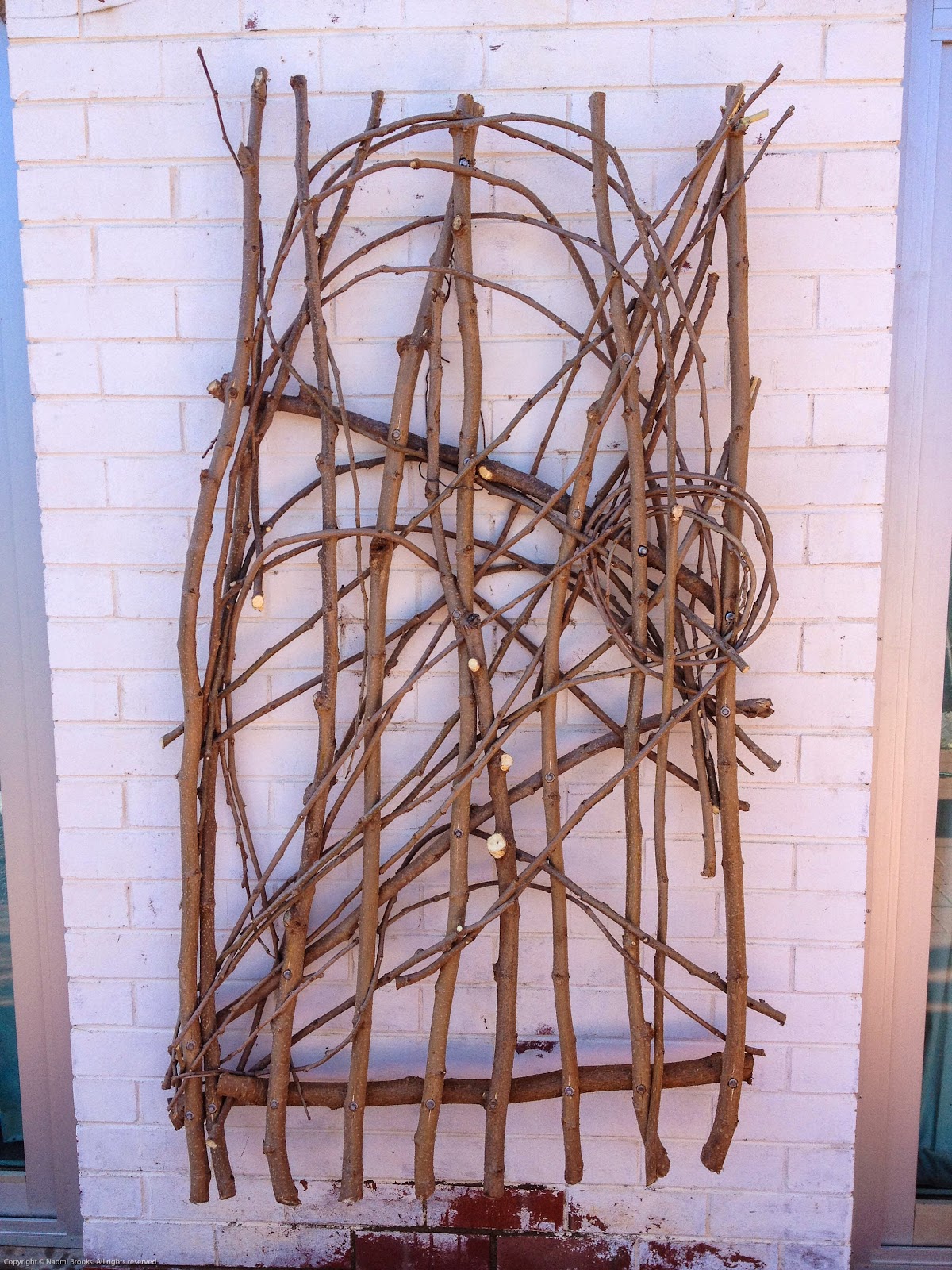 I then decided to find some hinges and hang it. This meant extending the gate a bit wider, and creating a catch so the gate wouldn't swing around wildly in our crazy weather. Then threading a few more canes around to complete the look. 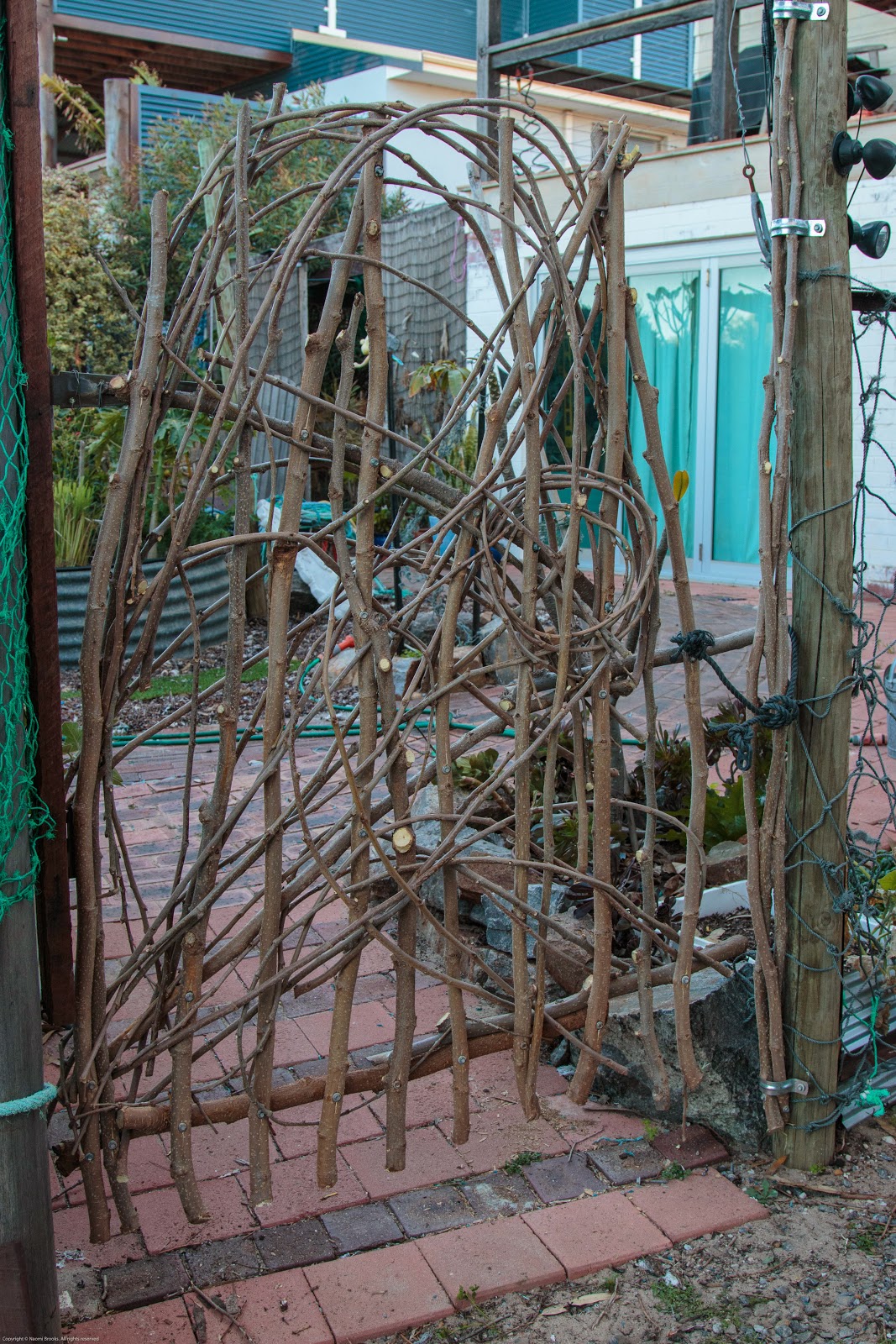 I'm pretty happy with it... 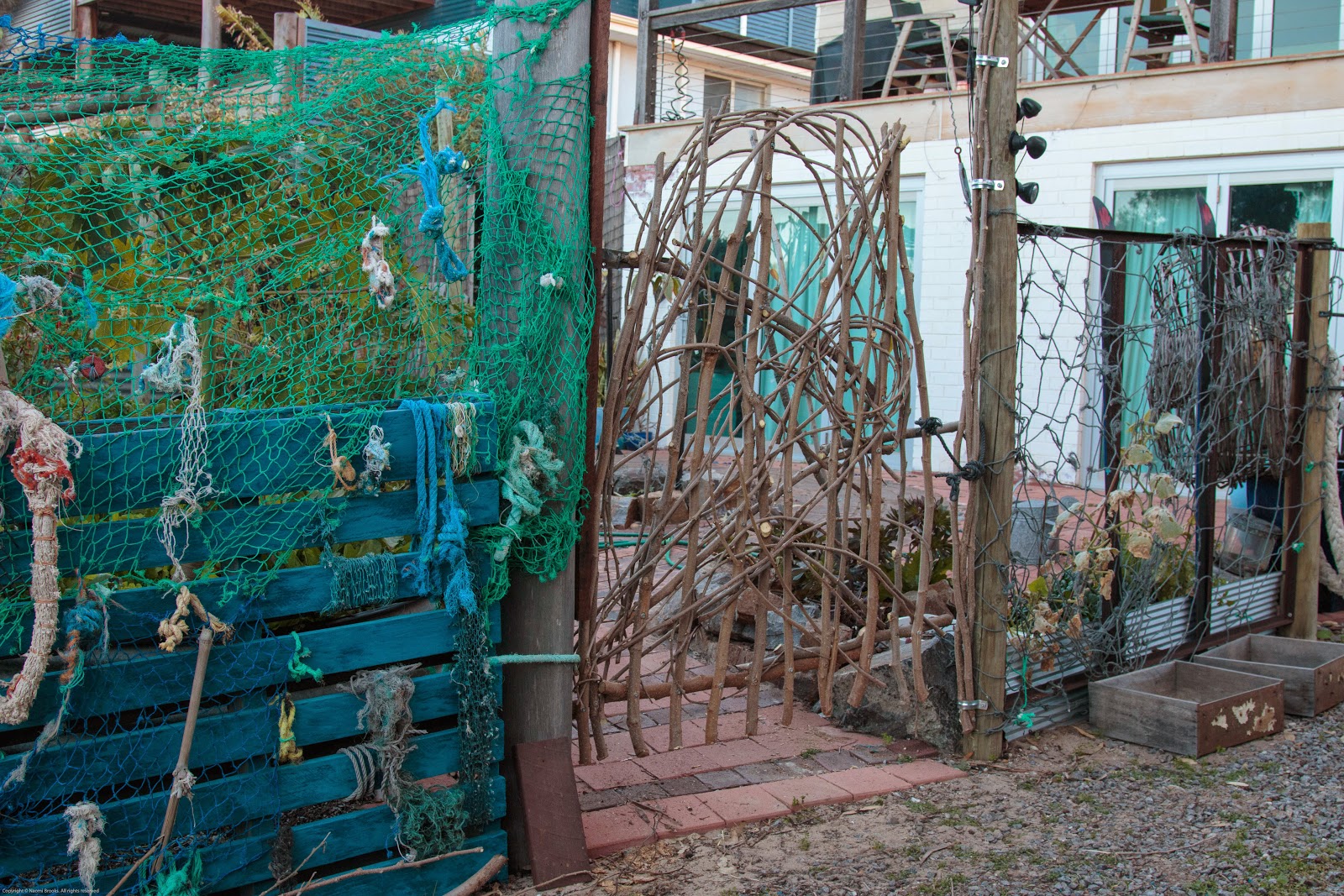