Reaping the fruits of an organic life

I've been plodding along in my veg patch for quite a few years now. I'm not sure when I first thought up the idea of cutting down old tin water tanks to use as raised beds, but I can tell you it was before Josh started touting the idea on Gardening Australia and then all the garden shops started selling ready made ones. I remember thinking "Ooh, you stole my idea!" that first time, though I'm sure I'm not the first to think of recycling water tanks in this way.

Even before the cut down tanks I'd decided to grow organic. My first vege patch did really well, probably because it was sited over the leach drain from the septic tank, but subsequent crops did poorly, as the water resistant sandy soil didn't hold nutrients. So going raised made more sense, and filling the tubs with organic matter hopefully would result in better water retention. In fact the initial tanks were like huge compost bins, rotting down all the waste greens from the garden with a heavy side serve of blood and bone and animal manure. And a little sand.

Only recently have I learned to add clay to my soil. This is the only way to retain the water, and hence the nutrients, and stop them draining away. My current strategy is to add clumping kitty litter (Coles Own Brand is the cheapest) in thin layers through the compost each time I turn and water it, which is approximately every 2 weeks. Thanks to Pauline, who began the process whilst house sitting whilst I was in Java, I've now made 3 full bins of beautiful moist humus to put on the garden.


Turning and watering the compost results in a pretty quick turn around of garden waste into crumbly humus I can use on the garden. I'd say it takes between 2- 3 months over the winter, let's see how long it takes now the weather is warming up.

The warm weather means the coriander has bolted to seed, along with the lettuce, rocket and bok choy. So far, I've only collected the cos seed heads, and am waiting for the rocket and coriander to brown off before collecting.


Warmth also brings aphids into the garden, and this is where an organic garden starts to work its magic. First, you have to be prepared to lose a little to the aphids, and perhaps to eat a few when you cook up your kale. But then, magically, the aphids seem to have disappeared, and in their place are the predatory insects, like pretty little ladybirds, that love to devour aphids, and the tiny wasp that lays its eggs in aphids and their carcase becomes food for its young. Finally, the birds, that flitter in and out catching insects on the wing.

Before the aphids, snails and caterpillars could really go to town, I harvested a huge quantity of silver beet and kale, then washed, blanched and froze them in ziplock bags to use later in the year. I've also got a massive supply of dried chillies!!


The recent rain caused an explosion of snails, which I just pick off the foliage and throw on the road for the birds and lizards to help themselves. No, no road kill so far, it's a quiet road...

The lizards and snakes have woken from their winter slumber, so daily encounters with stumpy tails aren't uncommon. Only one small snake encounter so far...


I've been busy planting tomato seedlings, and am somewhat disappointed that I only managed to germinate one eggplant and 2 okra seedlings, so have seeded another tray and replanted my 3 successes into individual tubes to grow them on before planting them. Soon I'll be erecting the shade cloth over the garden as the temperatures begin to climb over 30 degrees. And spending my afternoons windsurfing... 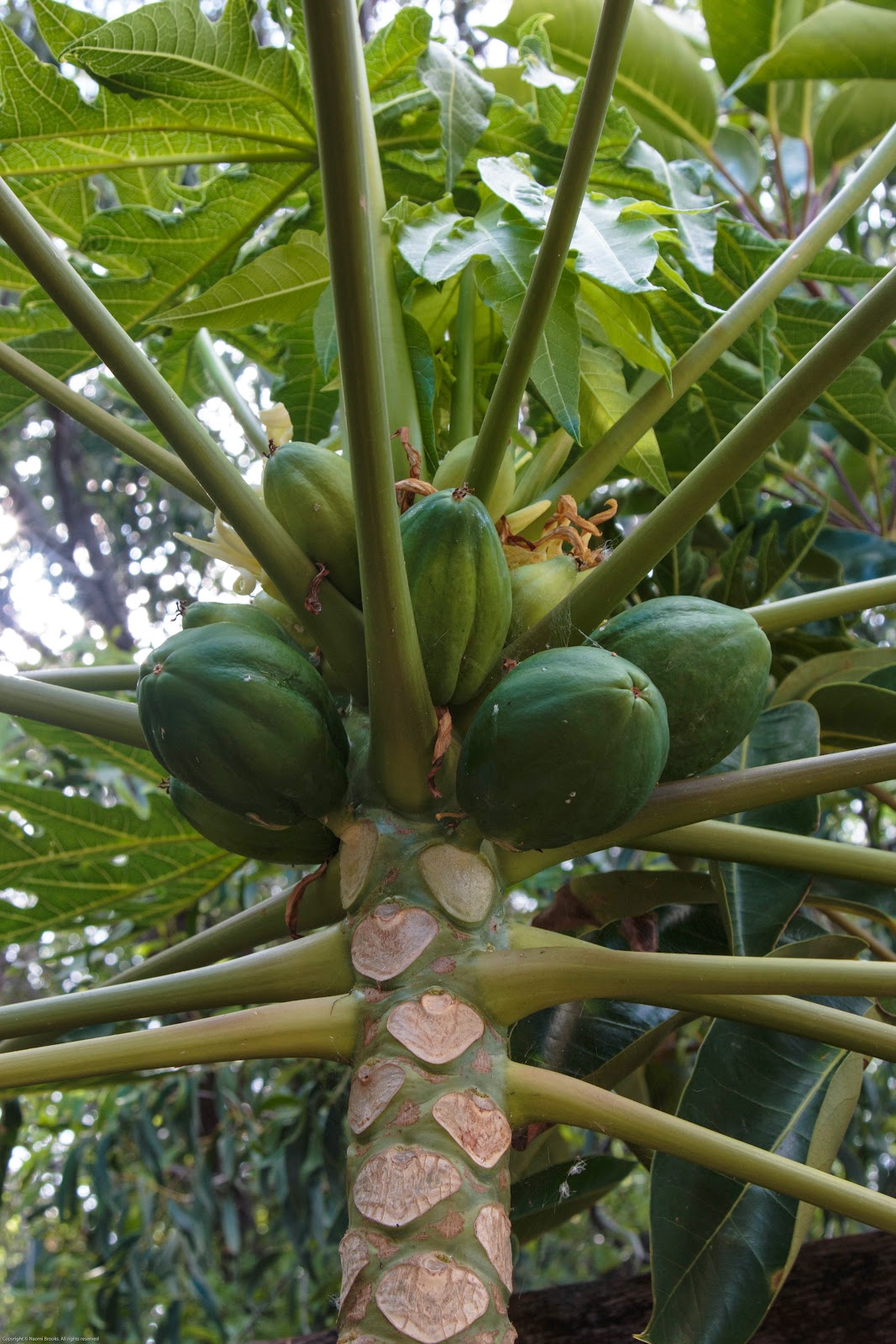 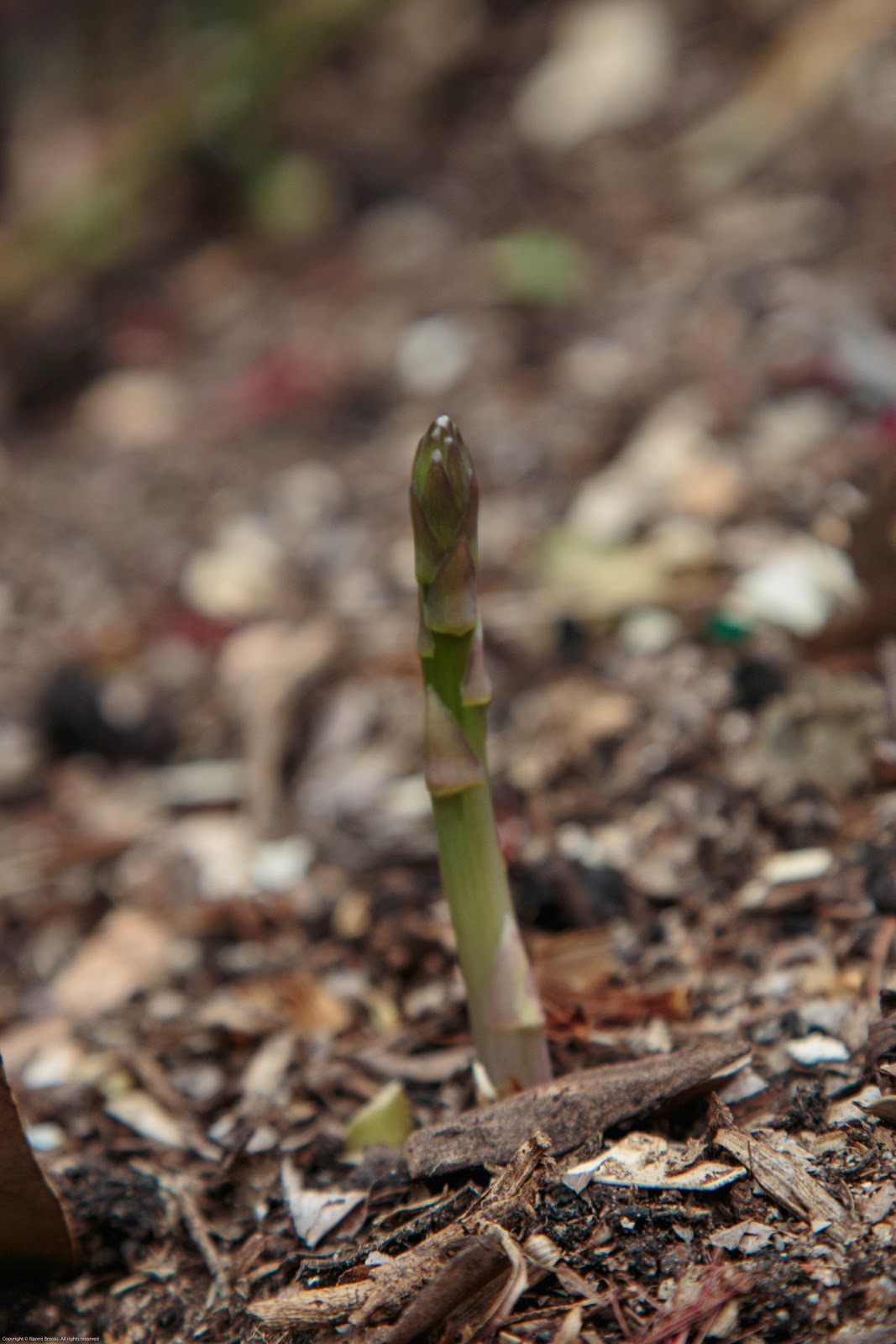 Papaya are growing fruit - the hand pollination seems to have worked - and the asparagus have started sprouting.


I've also just planted a new row of beans on the driveway side of the fence. And yes, those skis looked stupid so I removed them and will find some other use for them. The fence looks much better without them, and will look even better with greenery all over it...


Another little job I've been doing is to pave a small parking area off the driveway. I want to put my camper trailer here whilst I work on finishing the backyard. It can also be a parking area for overnight guests, or for when I convert the garage into a self contained apartment. Ah yes, many plans in the pipeline.. 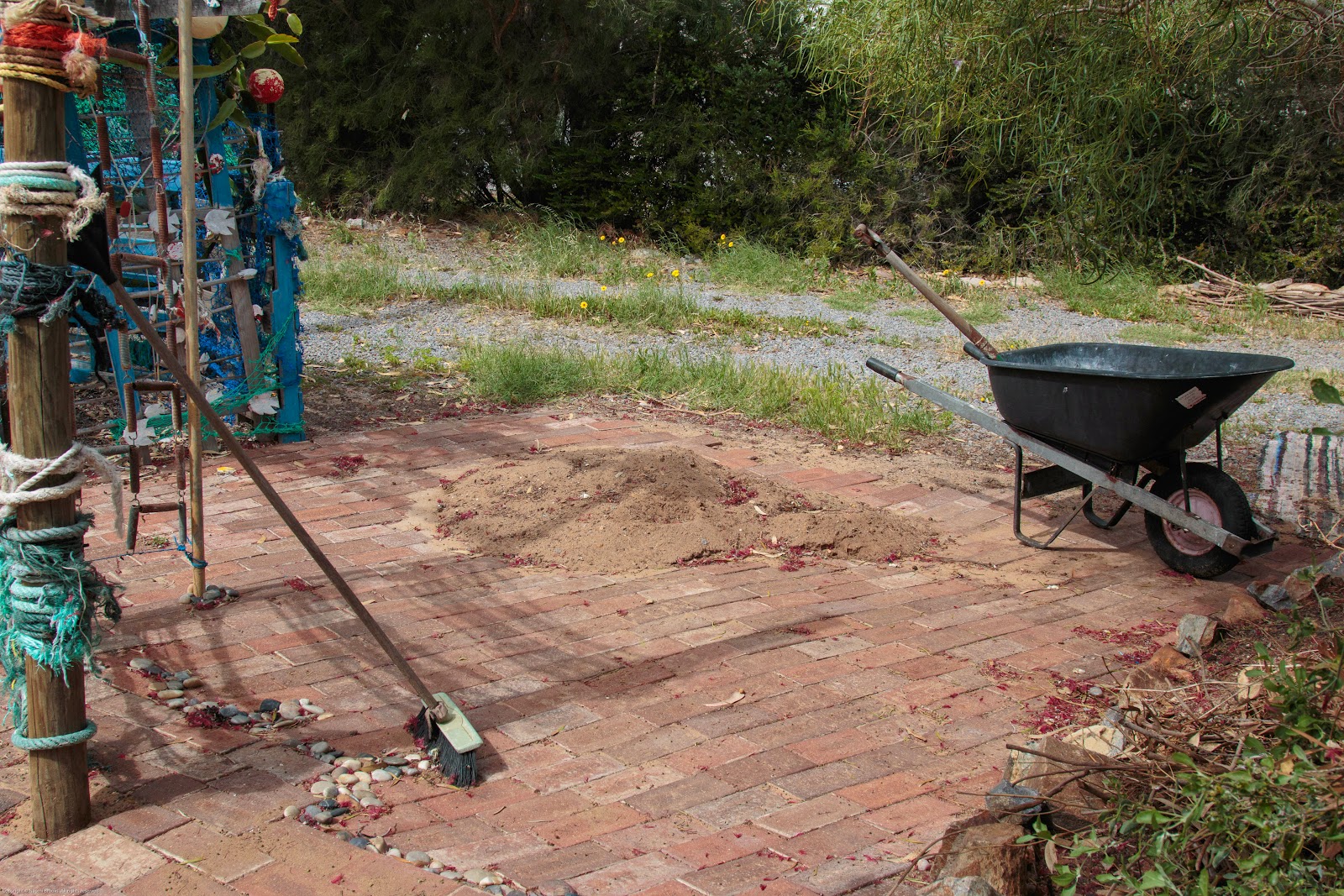 We've had some pretty impressive rainy storms in the last few weeks, which means my tanks are all full and overflowing, and the garden is really healthy. For some reason when it rains the veges grow twice as big in 2 days. My friend Julie at the Permaculture Nursery believes it's due to healthy bacteria in the rain, or maybe that treated scheme water doesn't have these anymore. I only water with rain water, but still, the stuff from the sky seems to come with steroids, so there must be something in what Julie says.

The self seeded pumpkins have begun to fruit, whereas Jack's pumpkin is still just stubbornly pushing out flowers. They are definitely quite different varieties from the size of the leaves, we shall just have to wait and see!


One cucumber plant has begun to put out lots of growth and begin flowering, the others are a bit slow. The warming weather should jivy them along, but powdery mildew is also present. My usual strategy is to remove the affected leaves and throw them in the bin, though I believe I should be throwing them in the garbage rather than the compost bin!! 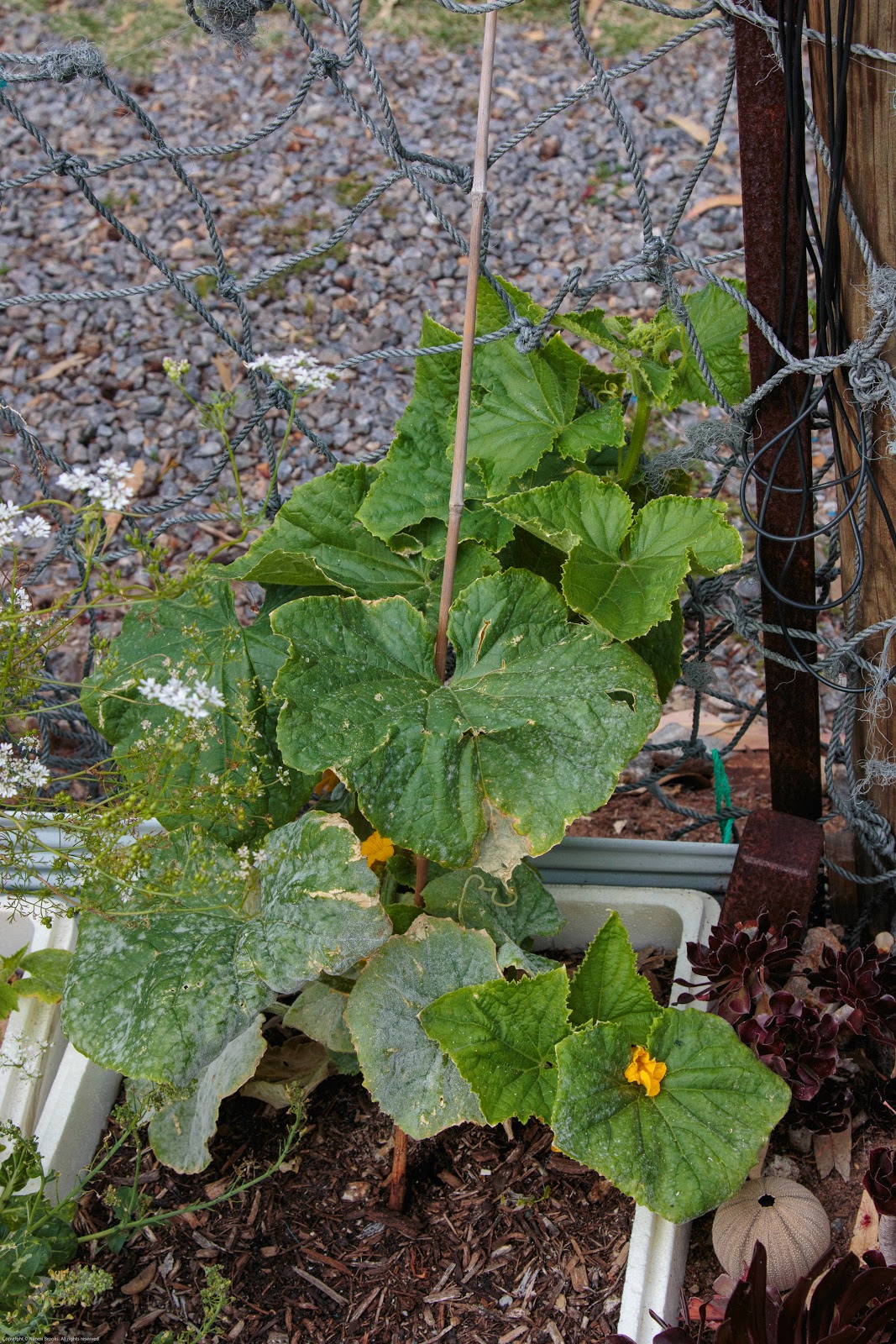 I'm planting more zucchini seeds, hoping to get a crop that manages to survive a powdery mildew infestation. I'm also going to hand pollinate them this year -  I will probably do that with Jack's recalcitrant pumpkin as well.


Remember the mulberry tree that I pruned heavily and made a gate from? Well what was left went spectacularly mad and I now have a bumper crop of huge purple succulent berries. The branches are so heavy with fruit they are drooping!! 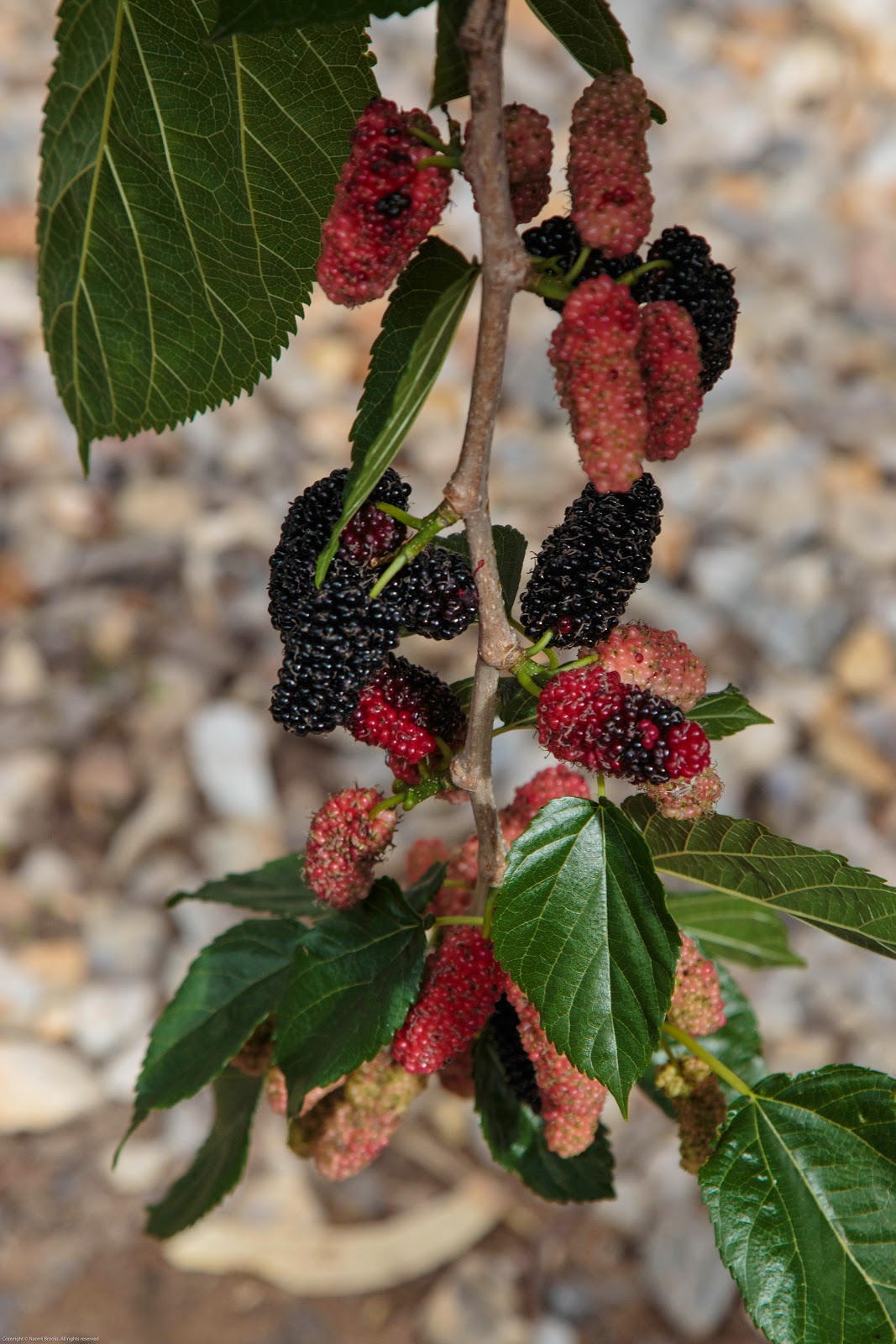 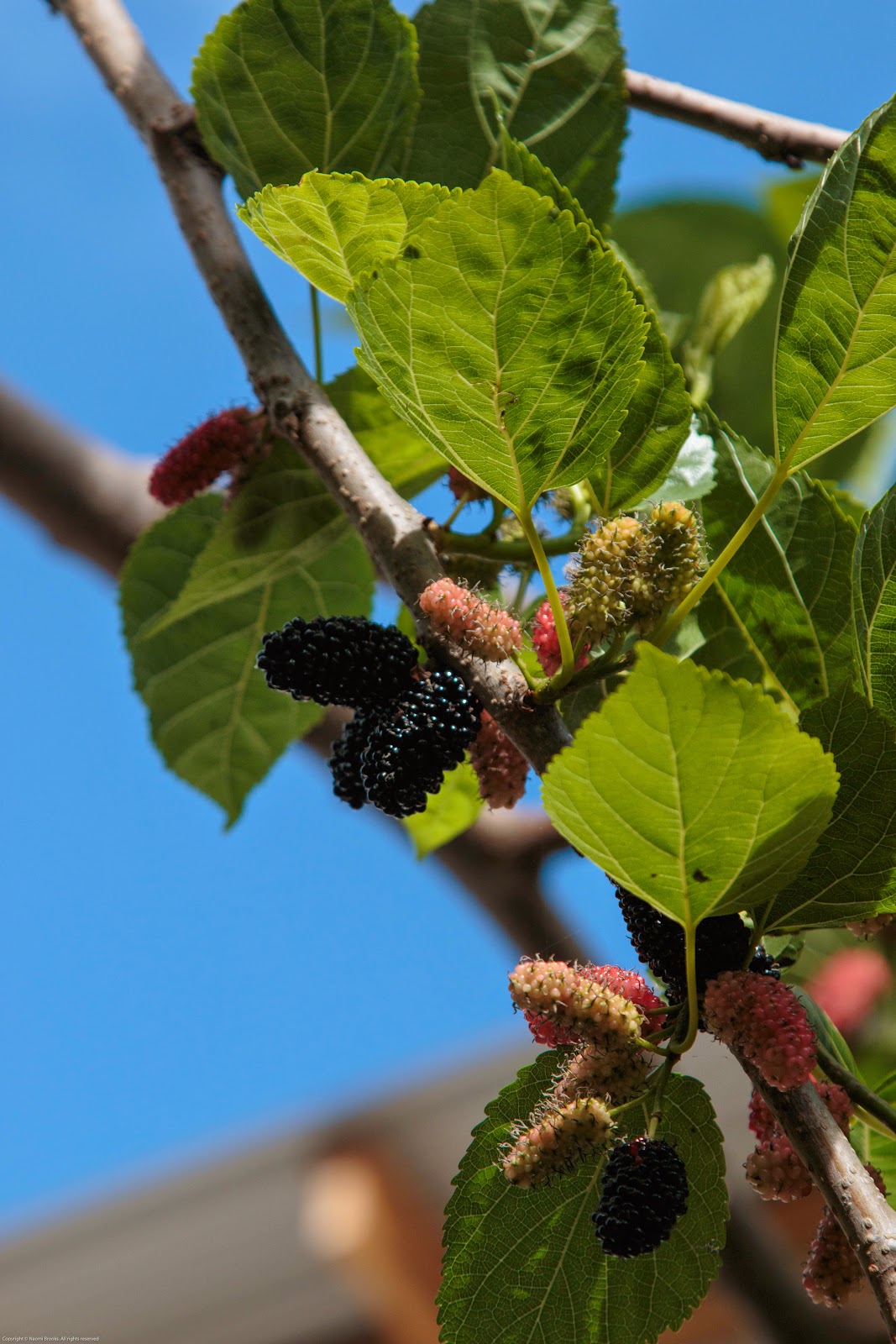 But watch where you tread, they make quite a mess! 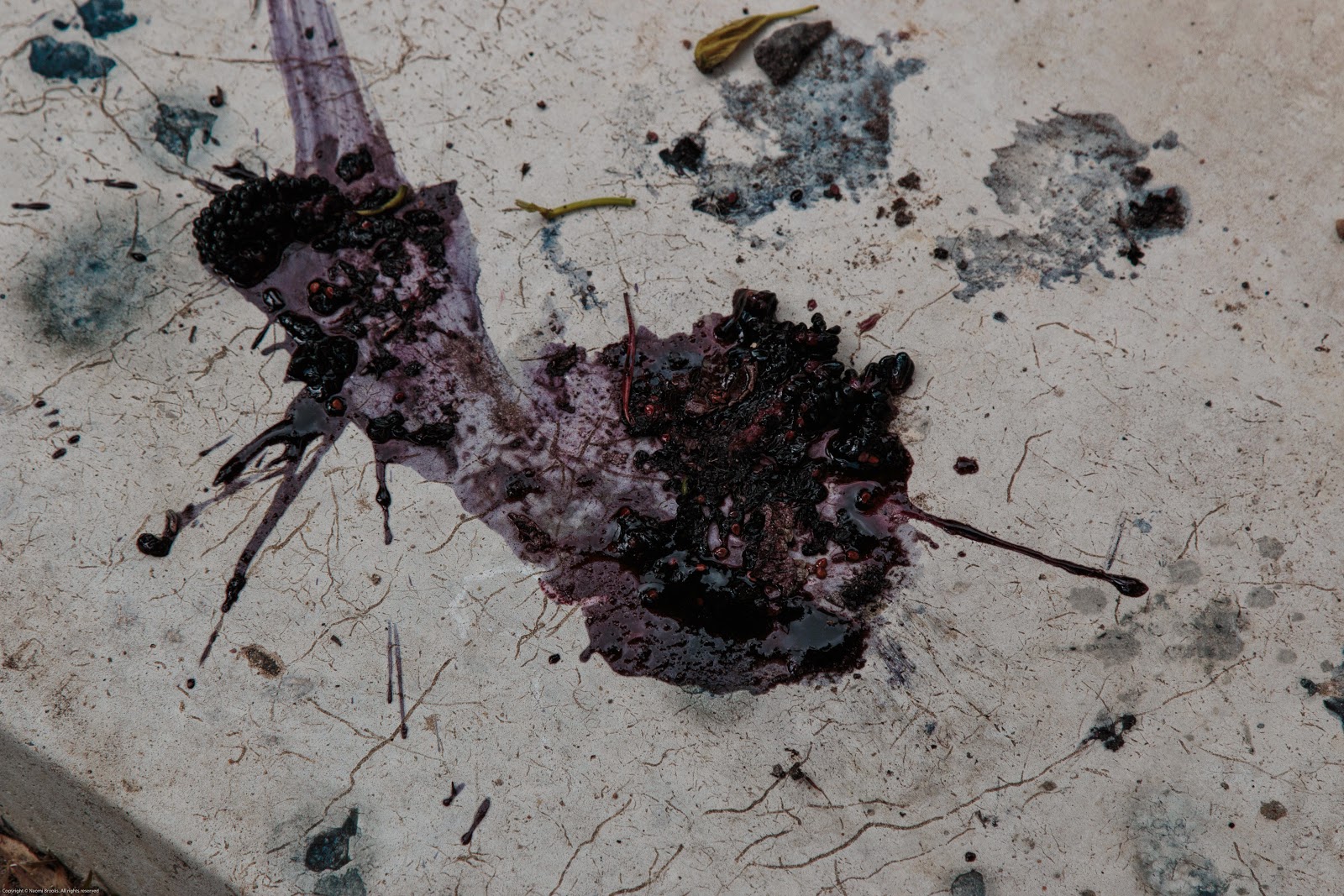