The two people who have had the biggest impact on my life are my mother, and Gough Whitlam. And this week Gough died at the tender age of 98. Apparently he was quoted refuting the rumour that the reason for his longevity was that the Almighty didn't want competition!! 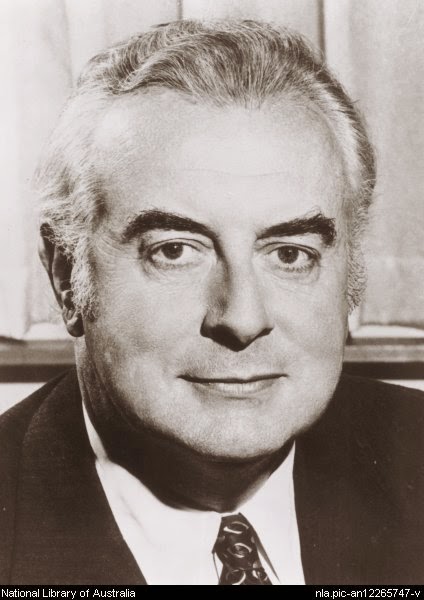 My mother had travelled the world before she met and shacked up with my father, a separated but not divorced man, and had 4 children out of wedlock. This was the early 1960s. In those days divorce was impossible without proving blame, so my father had to wait for his first wife to die. Meanwhile, my mother pretended to be married, and continued to work once us kids were at school. Her income was always more than dad's, as she was a trained draftsperson - a qualification that had been sorely won due to blatant antagonism towards the female students by the lecturers at her technical college. She survived because the male students were thrilled to have female students in their class, and protected the girls from most of the bullying. Even so, few women finished the course and when she was employed she was called a "tracer" because women weren't allowed to be called draftsmen, even though her job was the same as the men. For my mother, this sort of treatment just acted as encouragement, and she simply outperformed all the men by miles. She's quite proud of some of the innovative designs she implemented during her time with Melbourne City Council town planning, though she admits she may have "borrowed" them from her time working overseas...

I grew up in Canberra, and one of my earliest political memories was the "It's Time" political campaign of 1972. And then Gough was swept into power and everything changed overnight.

Suddenly women's issues actually became a topic that was discussed. Gough appointed an Office for Women, he legislated equal pay for women, divorce laws were changed to preclude fault, and welfare reform supported the homeless and single mothers. He brought in free health care and tertiary education.

I doubt my parents could have afforded a university education for their children. We didn't have much money, my parents lived in rental properties, we made our own clothes and frequented op shops. We never went on any posh holidays, mostly we went to Melbourne for Xmas to visit mum's folks, and occasionally we went on a car holiday and stayed in a caravan somewhere. There was never spare cash for school excursions, though we did do guides and scouts and we were all into outdoor activities like rock climbing, abseiling, caving and bushwalking. Back in the days when they weren't equipment heavy sports.

I got to study medicine, for free, because of Gough. In fact the year after I graduated they began the long slide towards reintroduction of fees with a precursor to HECS. I was happy I'd got through in the prescribed five years and not inconvenienced my parents too much.

I get paid the same as my male colleagues. I'm also respected as an equal. Over the years most areas of medicine that may have been dominated by male doctors have been infiltrated by women. But we still have to physically have those babies, so female doctors don't always rise to the top with such frequency as the men. But here I am in WA, and our newest public hospital is named after a woman. (Incidentally, I met Fiona Stanley at a dinner party once, and spent the entire evening chatting away to her and her husband before the penny dropped!)

So, back to Gough. Well my parents got married, I went off to university and subsequently, after many trials and tribulations, ended up working in Aboriginal Health. I've been to Wattie Creek, I've met Vincent Lingiari's family, and I've worked for the Gurindji people at Kalkaringi in their health centre. I understand what connection to land means for Aboriginal people, and I have huge respect for that great man who understood too, and had the means to restore that birthright.

Gough's passing this week has caused a huge outpouring of grief and reflection, from all sides of politics, because he changed Australia irrevocably. We changed our national anthem, we conferred our own honours (not English dames and knights) and we turned away from  narrow minded conservative thinking. And we got Triple Jay (double jay back then). And when Gough's financially incompetent government got the arse, in one of the most controversial political events ever, the next big man, Malcolm Fraser, continued many of those reforms and saw them through. Fraser axed free health care though, and we had to wait for Hawke to bring it back.

I'm almost convinced that Gough's done it deliberately. We'll be singing the praise of those awesome reforms of the early 70s for a week or two and people might suddenly see how far backwards our current conservative government is trying to take us. People might realise that things they take for granted have only been around for 40 years, and that they could potentially be taken away by the evil Abbott Government.

Gough went to my high school. Apparently he was kicked out for being too smart! A friend of mine was in a band that wrote a song about him. Actually, they named their band after him. He shaped all our lives and our futures.