This month it has been an all out effort to finish the great wall of Drummonds. The weather has been hovering in the mid to high 20s and aside from a few hours around midday when the sun is overhead, I've been working in shade most of the day. 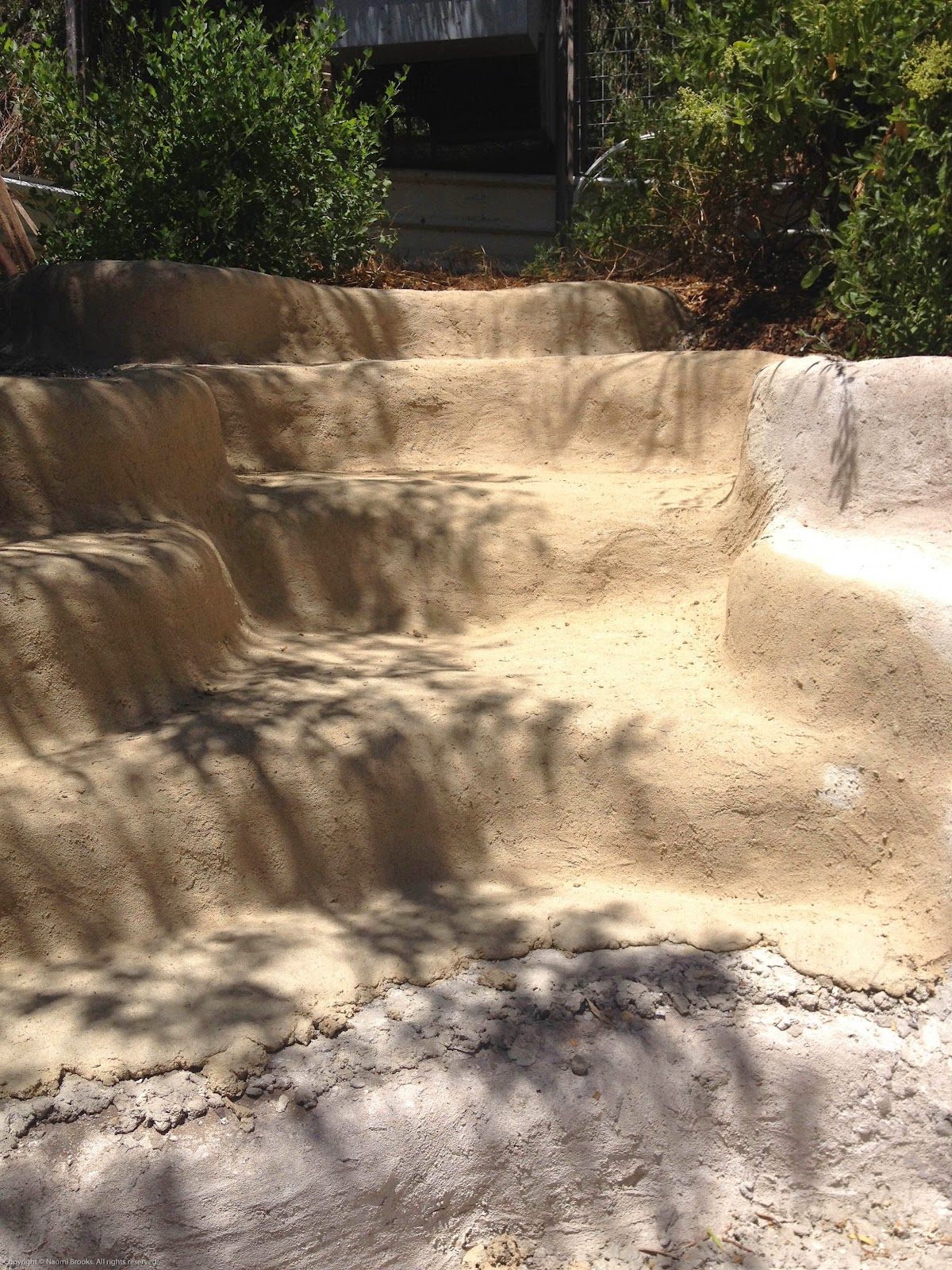 Having put cement on the top of the steps they next needed to be rendered. I dug down to some lovely yellow beach sand and made a lovely mix which looks great when it's wet. Sadly it all dries to a nondescript white colour which I'm thinking may be too intense, so I'm contemplating painting it at a later date. Still undecided on the colour.... 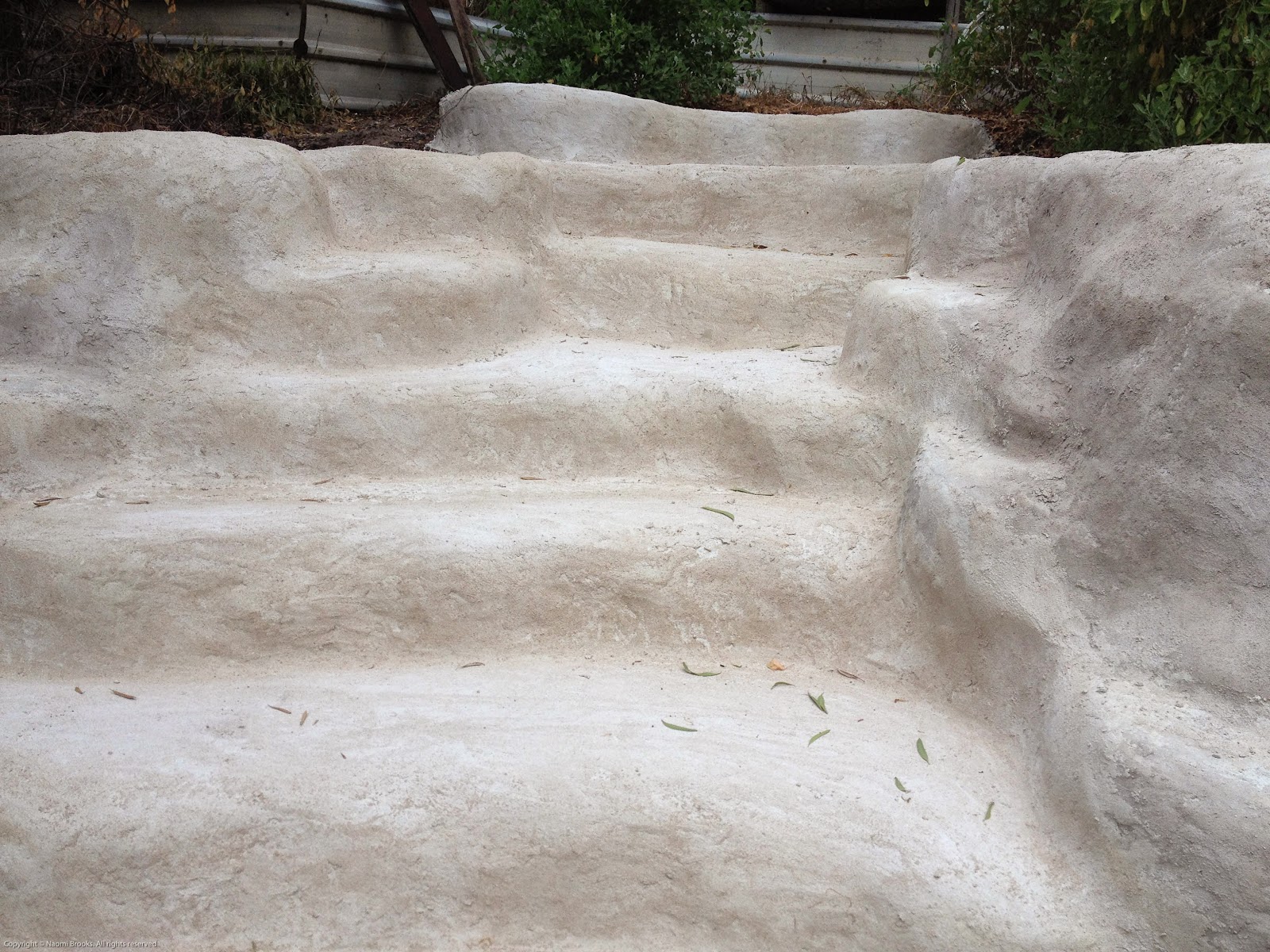 Then it was on to more of the wall. First I needed to extend the chicken wire and stuffing as far as I could go with what rubbish I had around the place. Old PVC plumbing bits, a couple of old windsurfing sails, any old plastic bottles and old shoes lying around, joined what few cans I had and the last of the wine bottles. It appears I hadn't drunk enough to fill the wall after all, and all the donated cans take up so little space once they're crushed. 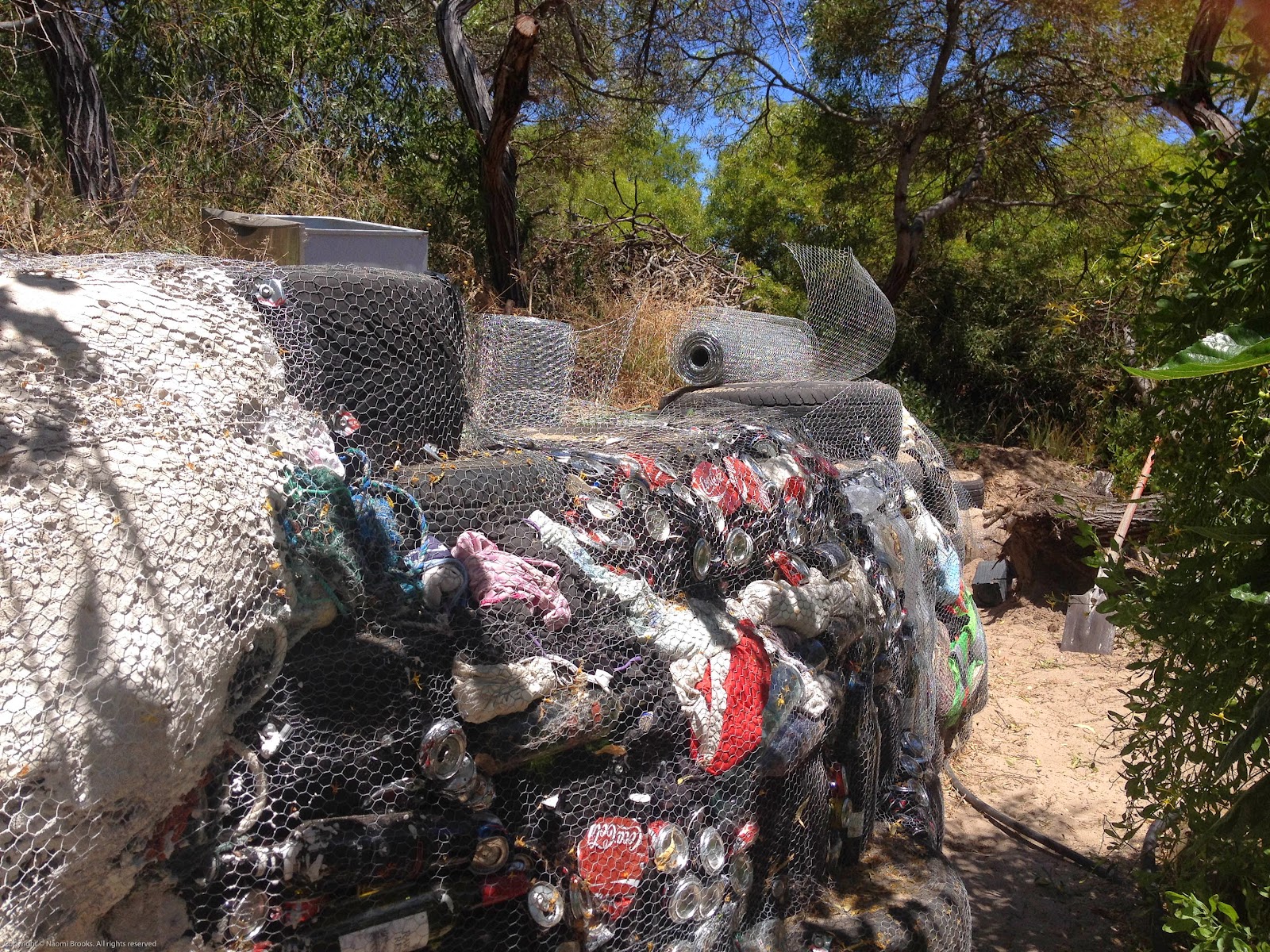 So with just one small section to go it was time to remove the huge black wattle in the way. Initially I'd thought I could just build the wall behind it, but it became apparent pretty quickly that that wasn't going to work as the level of its roots was just all wrong. They aren't long lived trees anyway, and this one's been around over 10 years so it probably doesn't have long left. And it's just plain in the way. 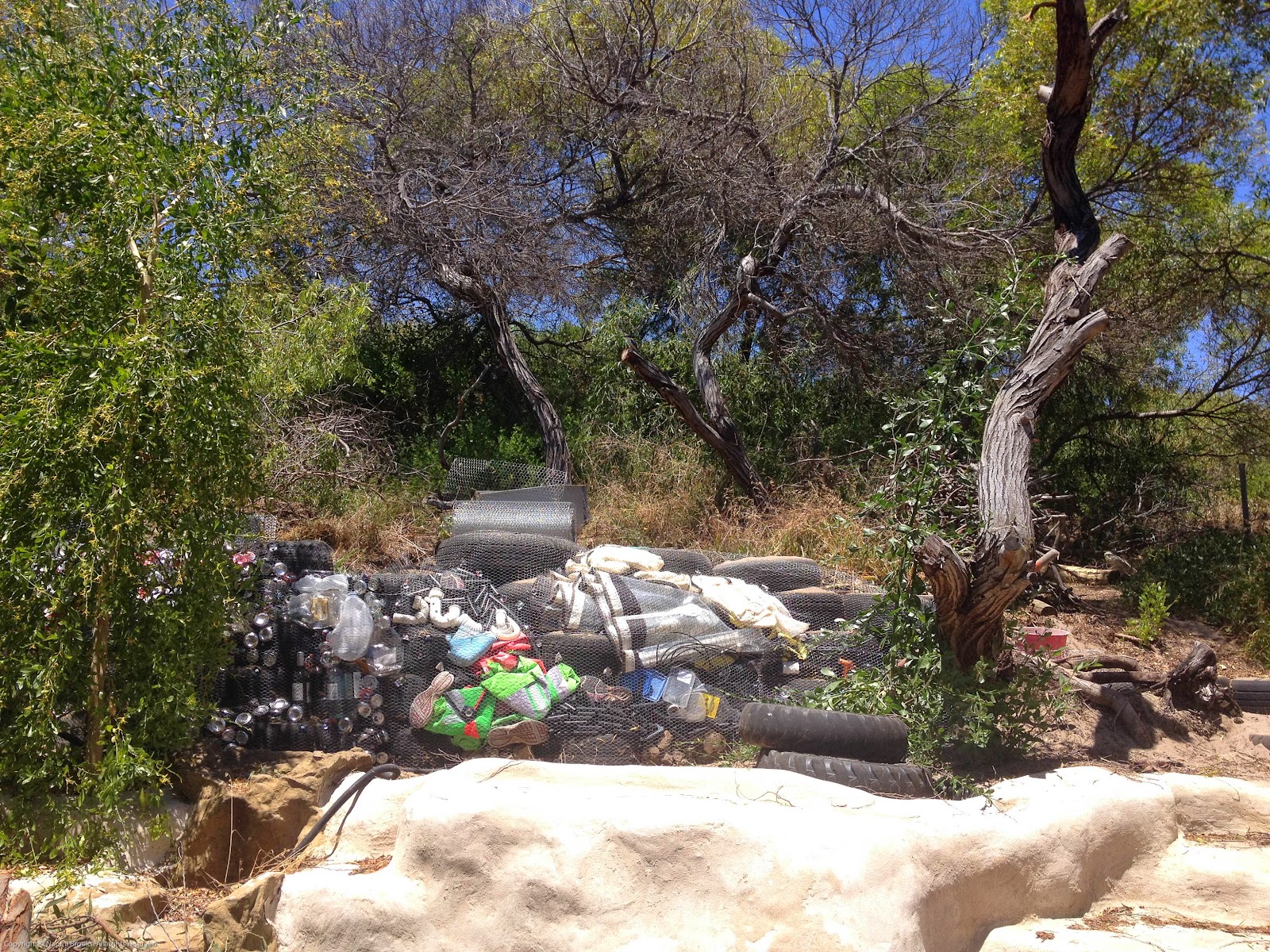 Sunday was a warm one, and it wasn't long before I was sweating away, slowly removing sections with the chainsaw. I'd chopped the smaller branches off earlier in the week using a handsaw up a ladder, but the lower thicker trunk needed the help of power tools. My cheap little electric Ozito did an awesome job, and with the help of some ropes I managed to remove the sections without them falling and damaging my wall. PHEW!! 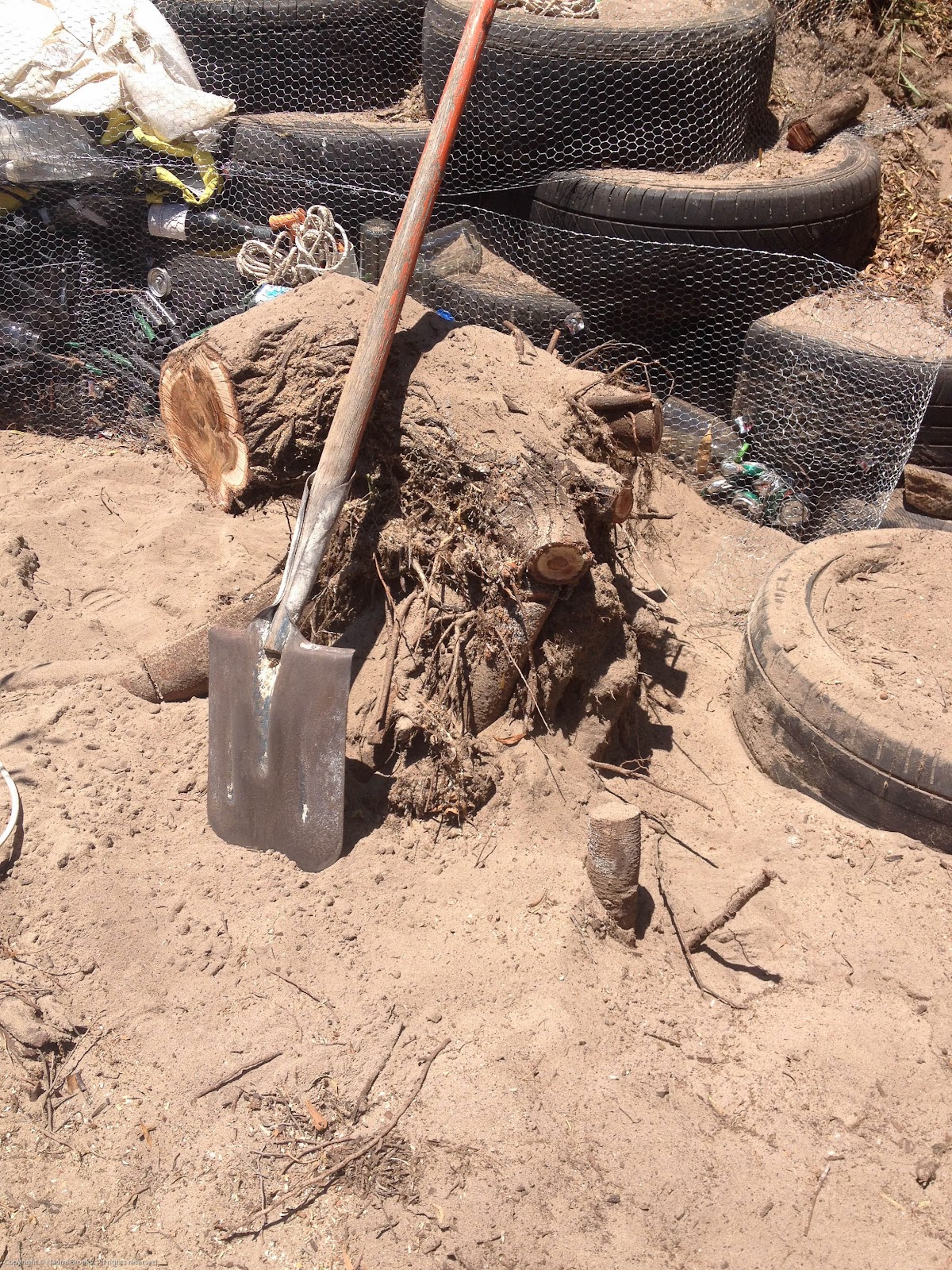 Then I had to remove the stump. Wow what a lot of big thick roots that wattle had. Nothing that a shovel, a chainsaw and choppers can't resolve though. 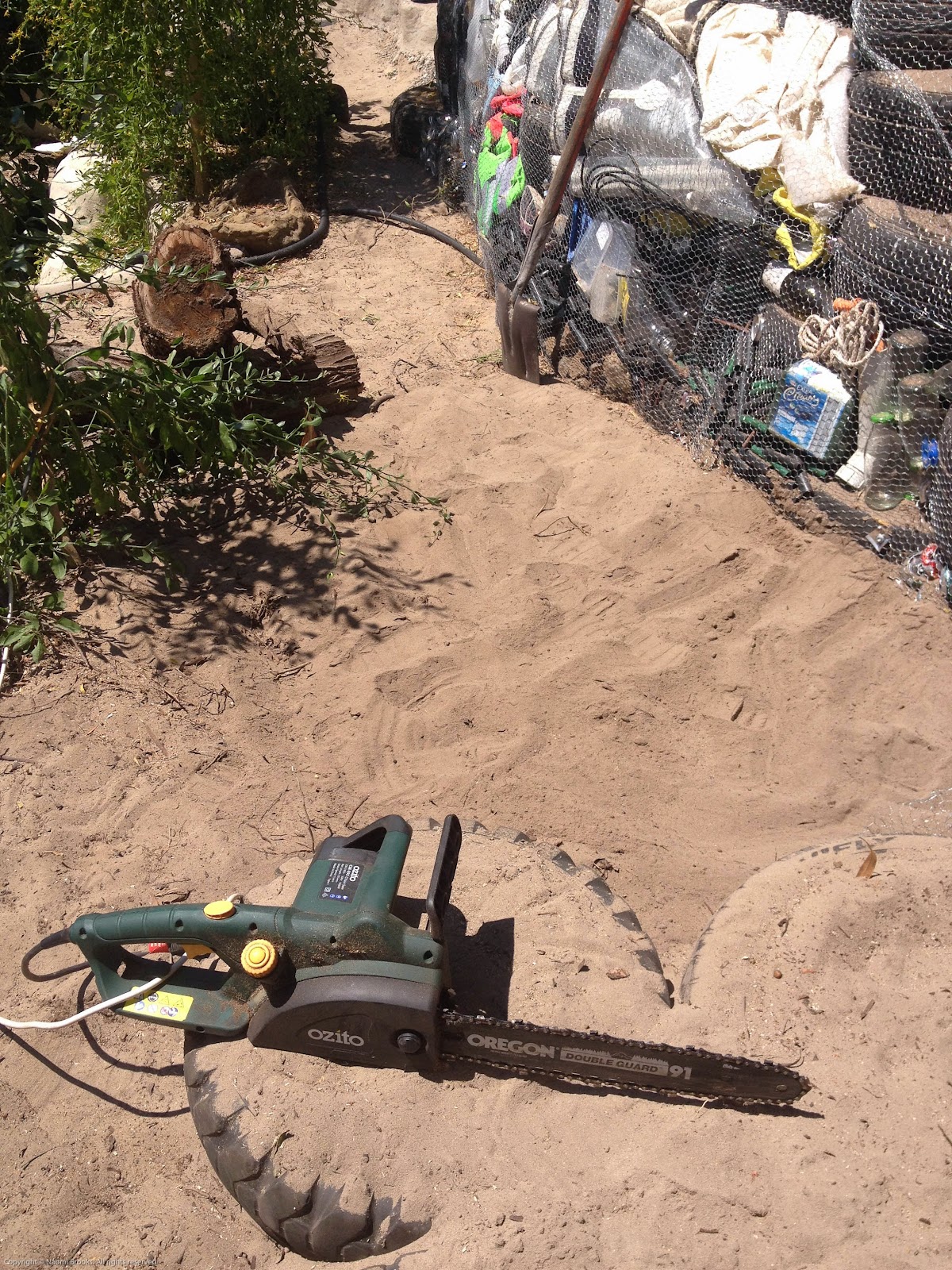 Out it came! And some steps put in to reconcile the levels.

Two weeks later, more donated cans, and the whole wall is stuffed and ready for rendering. 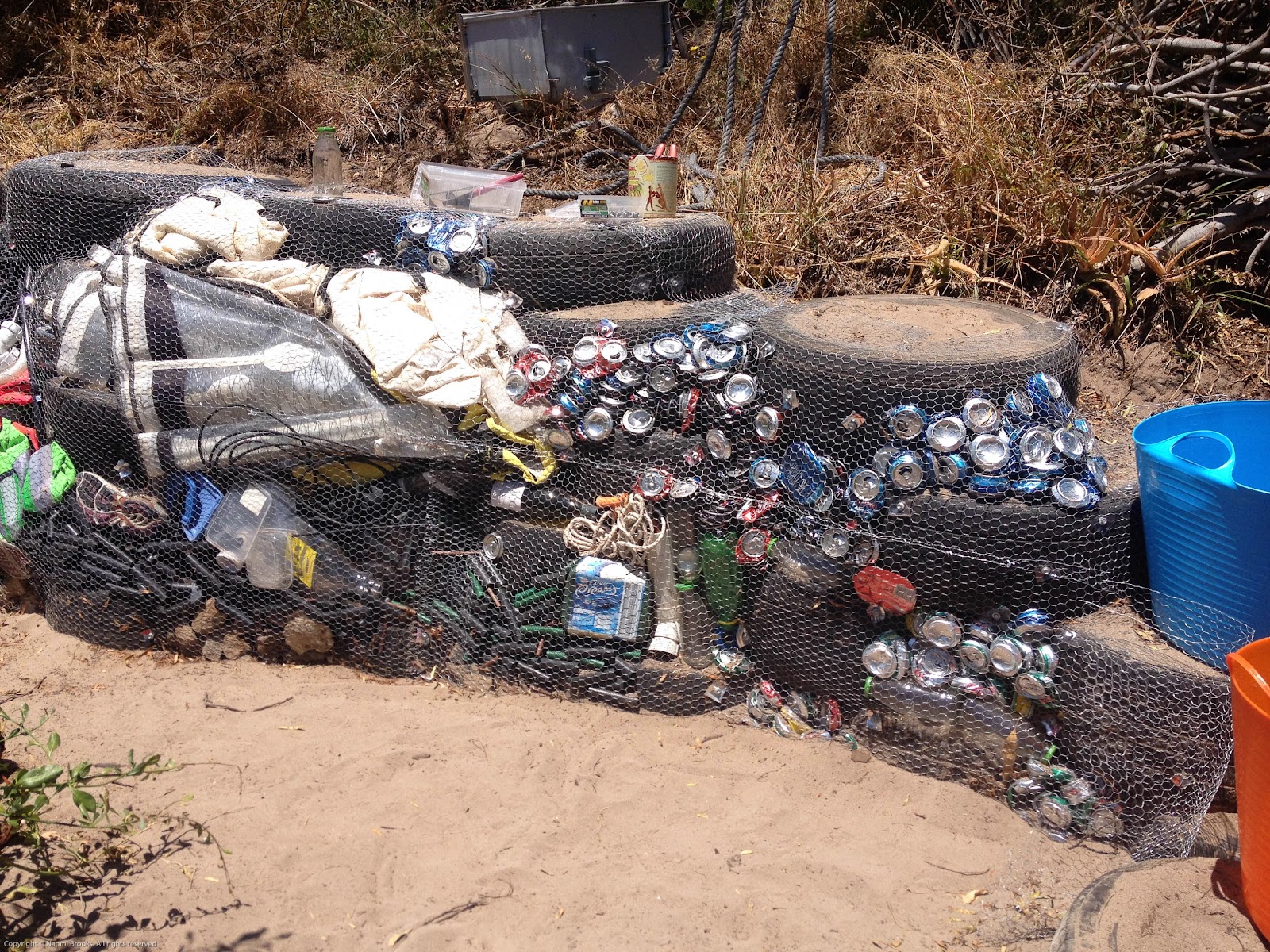 Back to mixing up sand, cement and lime with water and slapping it on. I really enjoy this process, especially the final bit when you try for a smooth even surface. Not dissimilar to icing a cake... 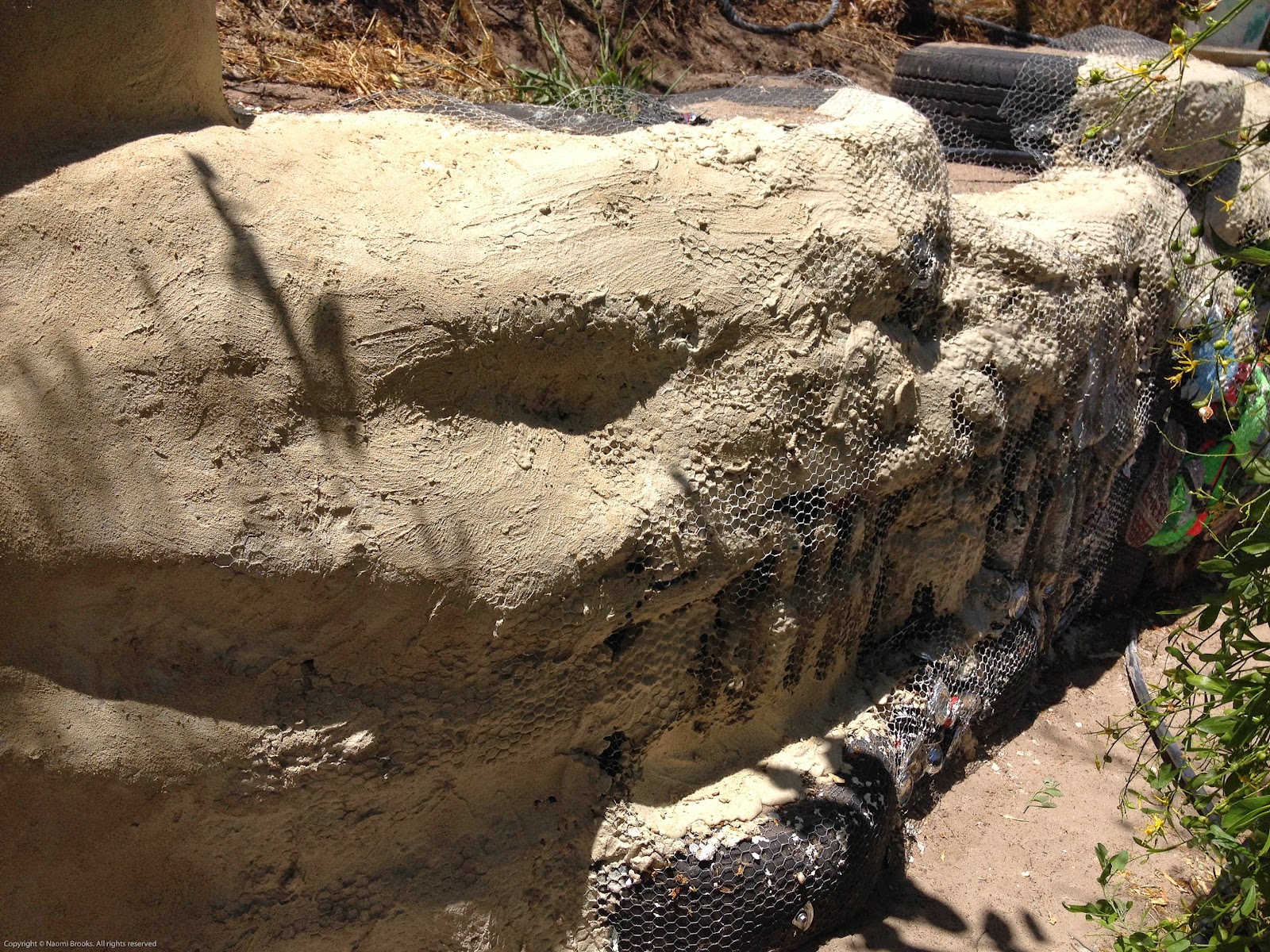 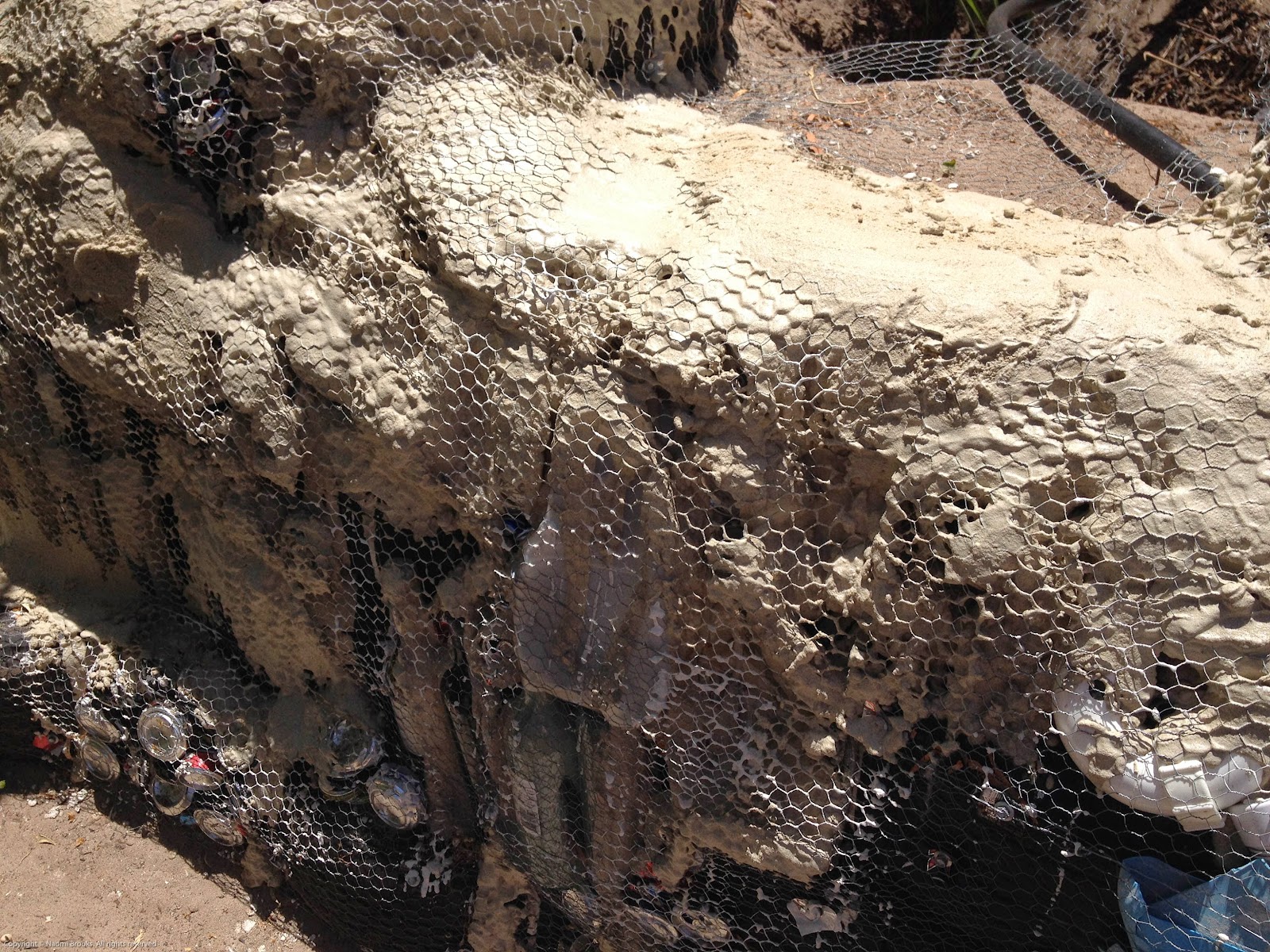 Layer upon layer gets thrown on and the surface builds up to something truly beautiful. 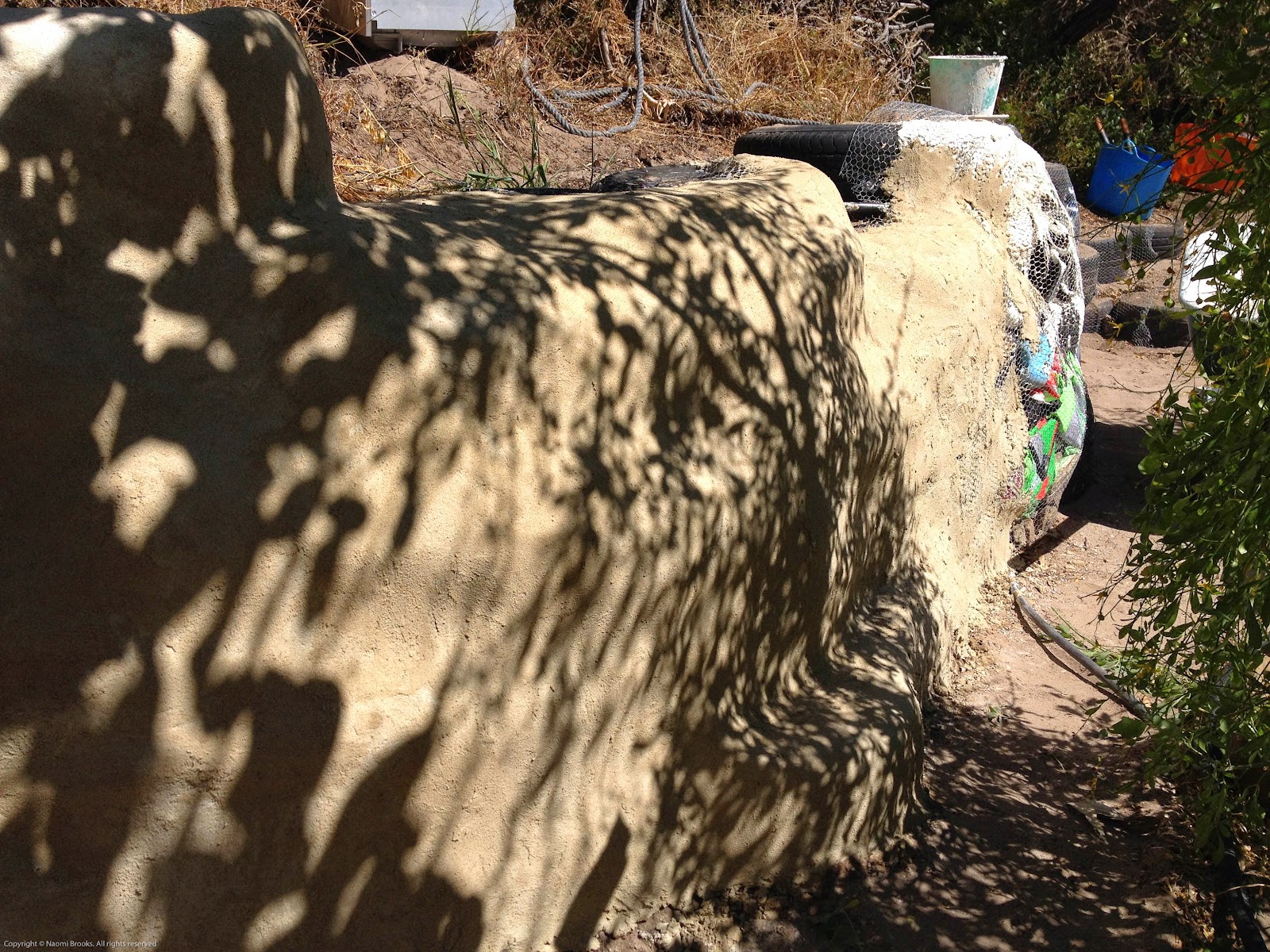 Only a small section left to go 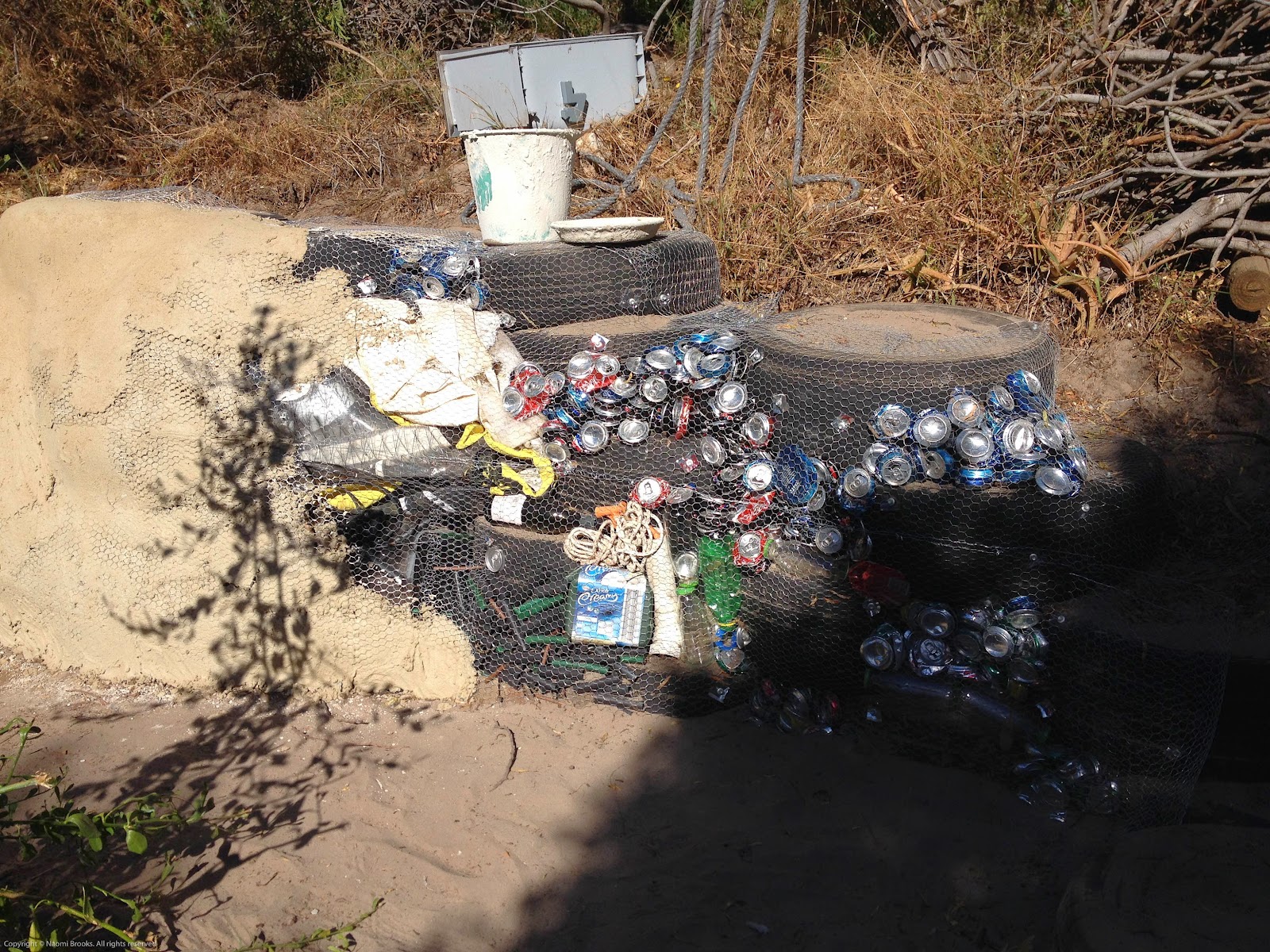 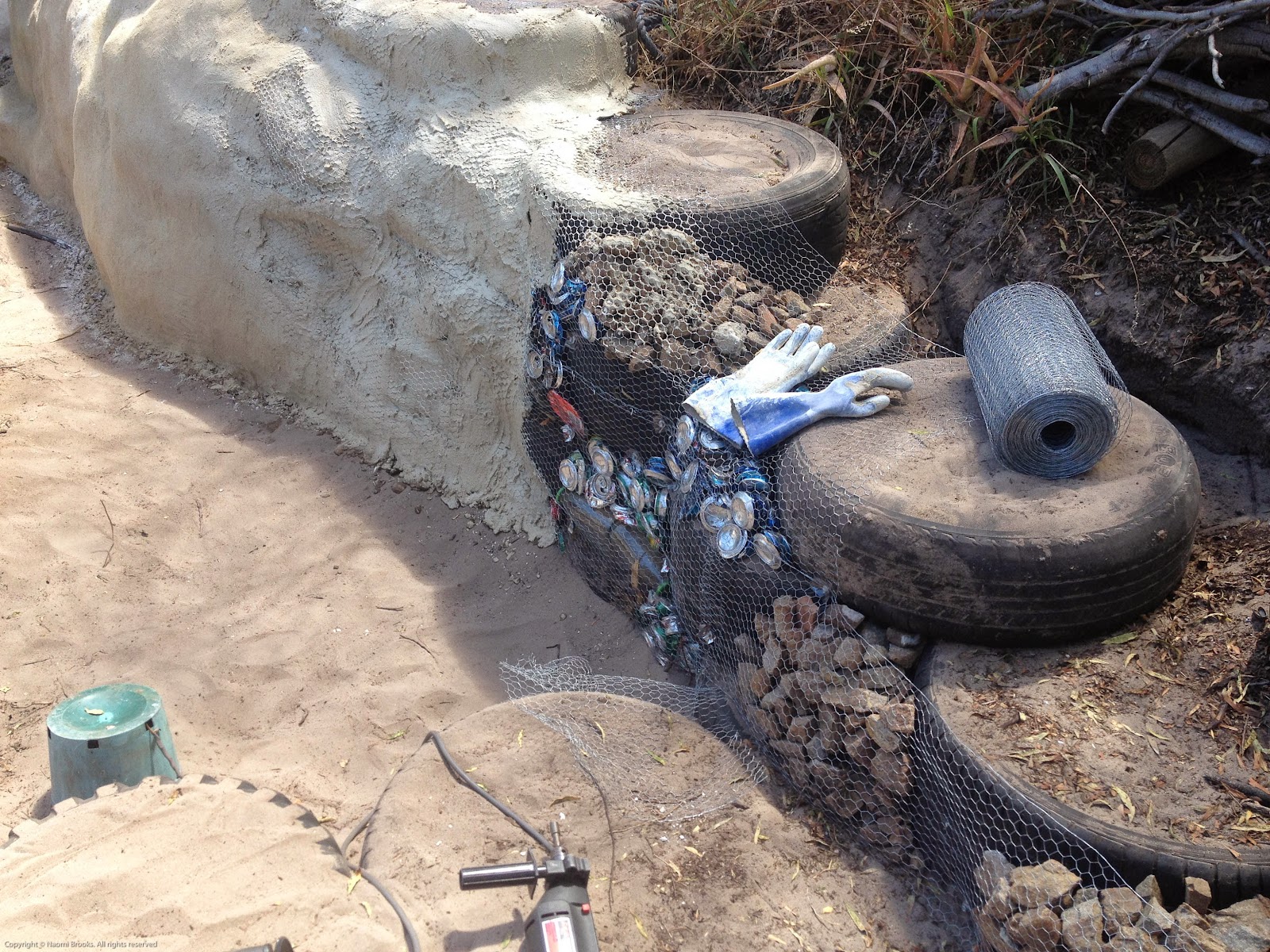 A last minute realignment of the end of the wall, and the final stages of covering up the steps on the southern side and infilling with rocks. 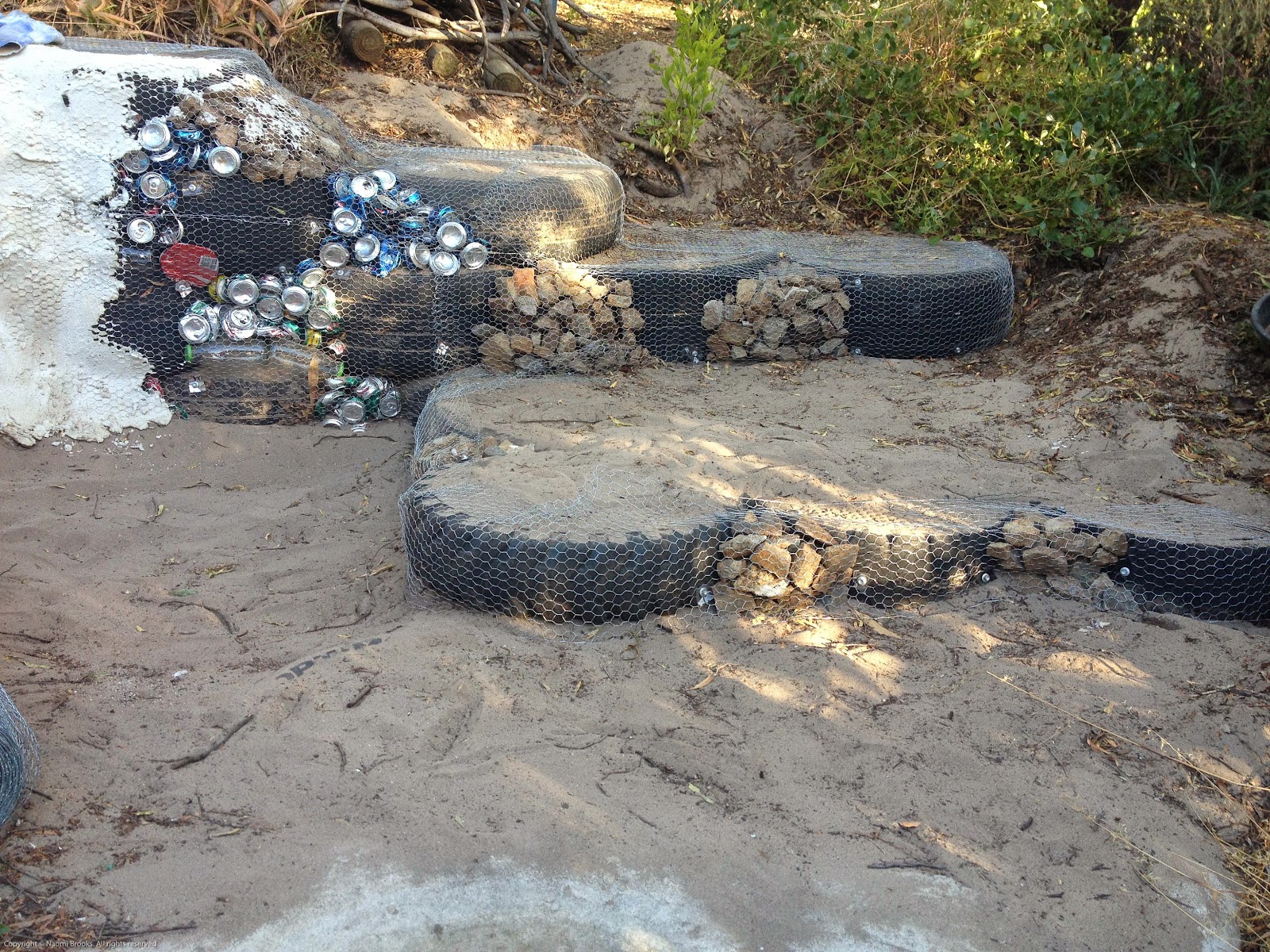 And then I went windsurfing!

Today the temperature heads into the 30s, and tomorrow it's forecast 39 degrees with a storm. So I'm packing up for the week and will see if I can finish it off next weekend.

That's all for now folks...