Gear for an extended walk through the woods Part 1

Having now decided to walk the Bibbulman Track next year I am fully into preparation mode. At some point I intend to join the Foundation, if only to give them a little money for helping maintain such a valuable resource, but also to get a discount on any merchandising. In the meantime, I'm using on line resources, the two old guidebooks I have, and a few books on ultralight backpacking and backpacking food preparation. 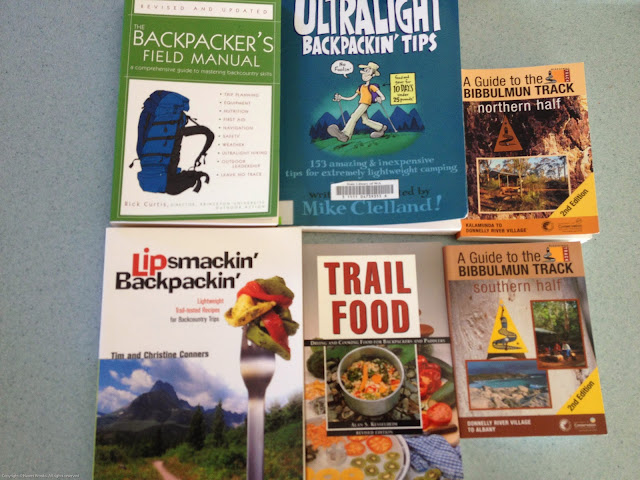 The key to ultralight is to reduce the weight of your "big three" items - cooking, sleeping, shelter - without compromising safety or comfort. This requires a combination of trimming down what you bring to the bare necessities, bringing items that have multiple uses, and purchasing or finding lighter weight materials. A journey through the ultralight forums on the internet reveals many DIY solutions that don't actually cost a lot of money. For instance the penny stove I made last year!


That's not to say I haven't spent any money, because I have. For instance I bought a tent last year, and after realising on my Java trip that a hammock has limited applications at altitude I knew I was better off with a ground based shelter. But that means bringing along a sleeping pad.


So bear with me here as we journey through this process. I have a great sleeping bag that I used in Java last year, which is 492g without its stuff sack and has a rating down to 2C. Which is more than enough for the Bibbulman.

Next I have a 3 quarter length (which is almost full length for short little me) Nemo Zor inflatable sleeping pad. Last weekend I inflated it and slept on it just to see whether it could handle an entire night without deflating. Also, to see whether it was comfy enough for a good sleep. It stayed inflated all night, and I used my backpack under my legs and feet to insulate them from the ground, and found I slept quite well. It's not as comfy as a thicker mattress or pad, but with my seriously low comfort needs, it's quite sufficient. I normally sleep on a hard futon, so mattress softness isn't high on my comfort needs, but warmth is. The Zor weighs 292g and 15g less if I ditch its stuff bag.


Ditching the stuff bag achieves a bunch of gains, not least of which is 15g less weight. Every gram saved means those luxury items I wish to bring won't hurt so much, but the real gain here is in speed,  reduced frustration and multiuse. By not packing that pad up into a stuff sack I won't be cussing away at how freaking difficult it is to get all the air out so it can fit into its teeny tiny bag, that then feels and looks like a small brick and needs to be packed somewhere. That will be an everyday occasion if I persist with the tiny stuff sack option. Instead, I'll be folding it up neatly and tucking it in as extra back padding in my backpack, and also to protect my laptop whilst trekking. A much tidier and hassle free solution...


Which gets me to shelter. Remember I said I got a tent. It's a four season light weight tent that's perfect for cold rainy windy weather, like Scotland (where I used my last Vango tent) or South Island New Zealand. Well that weighs 1.4kg, although I can probably shave that down a bit by substituting the pegs for lighter titanium ones which is not only an expensive option but probably won't save a lot of weight anyway. Thing is, a tent's not an essential item for the Bibbulman Track, because it has sleeping shelters all the way, and it's unlikely that they'll be full. Most people just walk small sections of the track, usually on weekends, and large groups aren't allowed to use the shelters until after 6pm to ensure that the small group and solo walkers get a chance of a berth, but bringing a tent is encouraged just in case, and each shelter site has spaces for pitching tents. From my reading of the ultralight literature "just in case" isn't something that should be considered, it's either necessary for your safety/comfort etc, or it isn't. And we're not talking extreme weather conditions either...


Bush camping along the Bibbulman track is really discouraged, mainly to try and preserve the pristine nature of most of the bushland through which the track passes, but also because large sections of the track are through water catchment areas. Usually public access to water catchment areas is prohibited in most of Australia, or tightly controlled, so free access through this area isn't to be taken lightly. And with so many shelters and campsites with water and toilets, it's hardly necessary to camp elsewhere. But down on the south coast, I'm planning to walk a little slower and stay in a couple of camping areas that don't have shelters, so yes, I do need to bring my own.

I love swag camping. For those non Australian readers, a swag is a bedroll made up of a foam mattress and bedding rolled up in canvas. You throw it down where you plan to sleep and climb in. You lie in your bed nice and toasty (the canvas provides superb insulating and waterproofing) and watch the stars as you drift off into nigh-nighs. And in our Aussie outback, the stars are amazing! In the morning you wake to the sound of birds singing as the gentle light of dawn approaches, and turn over for a few more hours of zeds!! Nah, I'm an early riser, especially when camping.

I've swag camped in Central Australia, where I've had to break the ice on a frosty morning, yet I've been snug and warm inside. Of course I had my snugglebug Hazel to keep me warm back then, what an awesome hot water bottle a cuddly little dog can be. However, a big heavy canvas swag is hardly for backpacking!!

The ultralighters use tarp shelters, and if combined with a bivy bag, there's extra insulation and warmth, the option to just sleep in the bivy if there's no rain forecast, or erect the tarp if there is. The tarp can be a pillow if not being used, or set up as a sun shelter should I want an afternoon snooze. And a tarp and bivy combination comes in at 750g! Plus pegs. Trekking poles can be used to erect the tarp, another example of multiuse!

I've gone and coughed up for some titanium pegs, which are 6-9g each. Once all the gear arrives I'm going camping for a night, so I can try everything out and see how comfy I actually am. Of course I promise to take lots of photos.