A summer job in The Catlins

Following my meltdown post surgery number three, I retreated back to The Catlins south of Dunedin to recuperate. The ideal combination of ocean energy, tidal movements, wildlife on your doorstep, and verdant green forests to walk through, is the best medicine for my soul. This time I decided to stay at a backpacker lodge out of town by the sea lion beach at Surat Bay and what a great decision that was.

My hosts were a welcoming couple who love a good chat, and within days they had offered me a job working at the lodge in exchange for board and lodging. I've done this before, so after my two week eye clinic checkup in November passed without incident, I rang Jack and Esther to confirm that I would return for the summer.

My home for the next two months was this awesome place looking out on the Owaka River Estuary. It's right by the beach at Surat Bay and it's not uncommon to watch the sea lions at play whilst changing the linen in the bedrooms. 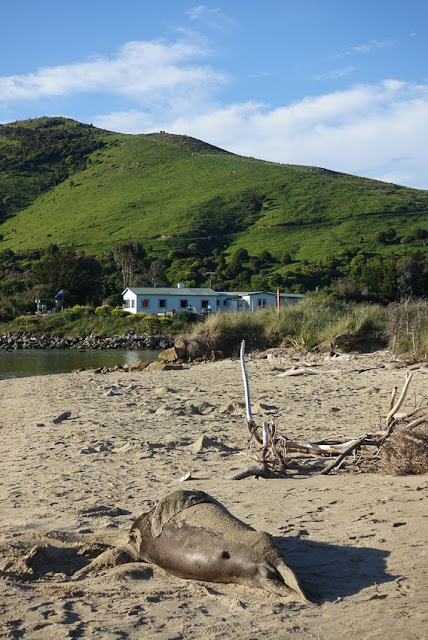 I'm glad I made the decision to stay put whilst my eye healed, and to limit my physical exertion to walking and house cleaning. Even though I followed my surgeon's advice regarding physical activity last time, this time I kept away from cycling or any activity where the residual gas bubble got to bounce around inside my eye. I kept up a much more frequent application of steroid drops for much longer, and slowly the inflammation settled.

I had my own little self contained flat beside the reception office, which I rarely needed to share with other helpers, as Jack and Ester usually house the helpers at their place down the road. I did my own cooking rather than share meals back at the house, mainly because I'm a bit of a whole food nut and it's just too long a period to be eating someone else's diet. Ester gives me money for food, or buys groceries for me, so the arrangement works fine. And there are seven friendly chooks for fresh eggs!! 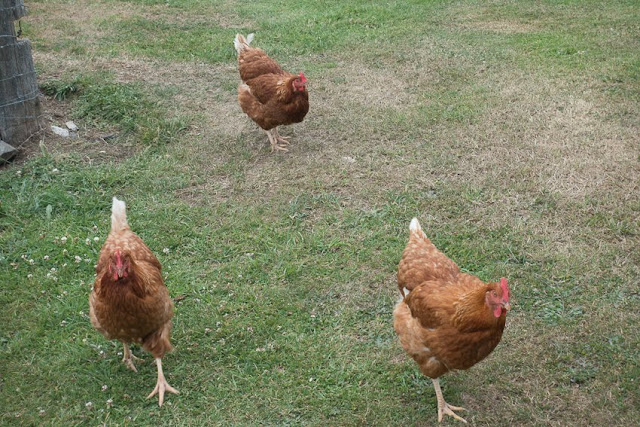 The work is pretty easy. I usually start the day by feeding the chickens and collecting eggs, then check the computer for bookings, reconcile the bookings, change the beds after checkout, clean bathrooms and kitchen, do some laundry, hang it out, and later bring it in and fold it and put it away. Then there are check ins to do, chat to the clients about what's to be seen in the area, and show them around the hostel. Most of the work is done before lunch, and I share this work with one other helper and Ester, so I often go off on trips for a few hours or a full day. There are only seven rooms and three bathrooms, so it's pretty cruisy indeed. 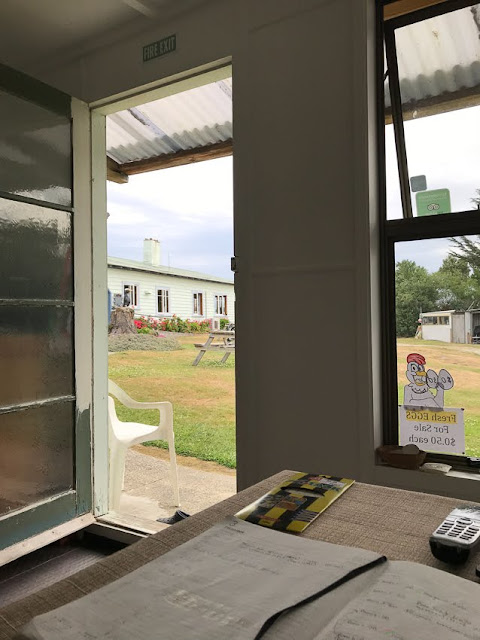 Being in the Catlins a bit longer allowed me to do a few more walks, and to visit some of the attractions limited by the tides. For instance Cathedral Caves, a huge cave you can walk through at low tide only. 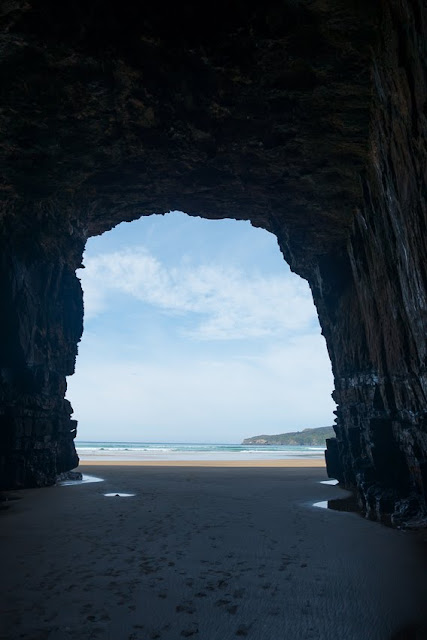 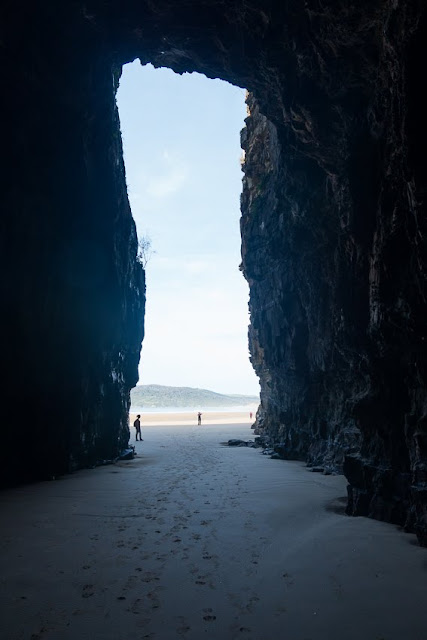 We were lucky enough to be there when a local farmer and his wife decided to make a flying visit. It's a pretty impressive hangar until the ocean comes back in again, and then it better be a seaplane! They flew off well before then... 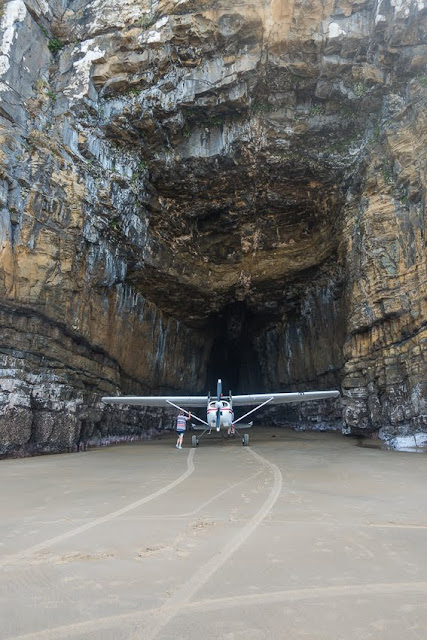 I'm loving the temperate rainforest here, with huge tree ferns, lots of mosses, lichens and worts. Plus a few fungi if you look close enough. Occasionally you can find a big tree which was spared felling due to being too imperfect for timber. The same for the forests I walked through on the Bibbulmun Track, the only remaining giants were the ones the loggers didn't want. It's really hard to imagine what the forest must have looked like 200 years ago.... 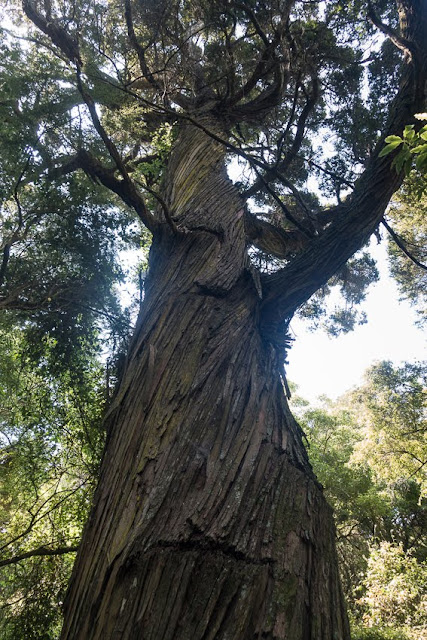 One day I headed down to Curio Bay, to swim with the Hectors dolphins that hang out in the sheltered waters there. It's a very scenic horseshoe shaped bay, with a sandy beach and rocky headlands, with a campground and a bunch of accommodation options along the beachfront. Personally, I prefer the sleepiness of Surat Bay to Curio Bay, which I'd considered as an alternative summer job option, but the beach at Curio Bay is definitely nicer, and safer, for swimming.

Also at Curio Bay, is the petrified forest, a collection of petrified tree trunks which you can see at low tide. It's not overly impressive to look at, but the science/history/geology of it is pretty cool... 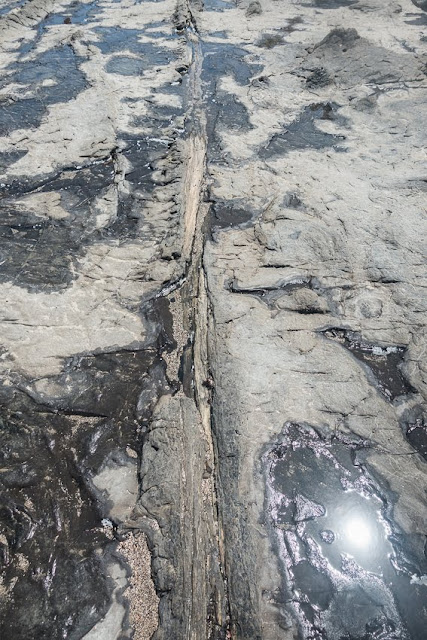 Across from the stone forest is a live forest, but only small with a grove of Manukas, attracting quite a collection of birds. Nothing like a little birdsong to lift the spirits.

One of the nicest walks I've done is a section of the Catlins River Walk. This walk follows the Catlins River upstream for 12km, passing numerous small waterfalls and crossing suspension bridges. There's an opportunity to make it a loop walk by following some old logging roads back rather than returning the same way, but I only went half way, deciding to lie on a rock in the sun for an hour or so instead. 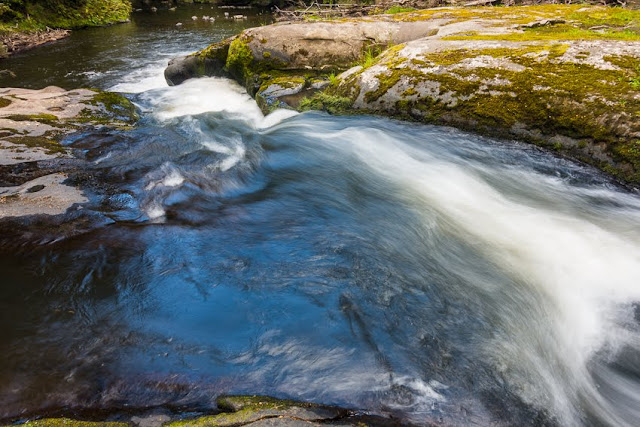 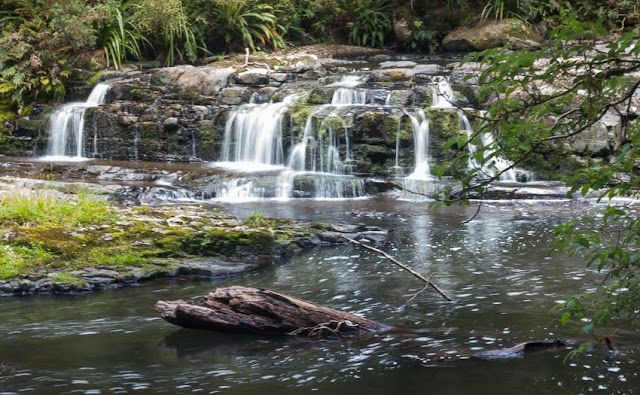 Besides sealions and dolphins, there are penguins, and the best time to view them is late evening when they return to their nests, or first thing in the morning when they leave for the day. There is a hide at Roaring Bay, just below Nugget Point, so one morning we amused ourselves watching these little fellows.

I also got to know a few of the locals at Surat Bay and Papatowai, where I'd go for coffee at Peung's coffee caravan at The Lost Gypsy Gallery. I particularly liked the community at Papatowai, which has a bit of a hippy vibe, without the actual hippies. I might even have made a few friends... 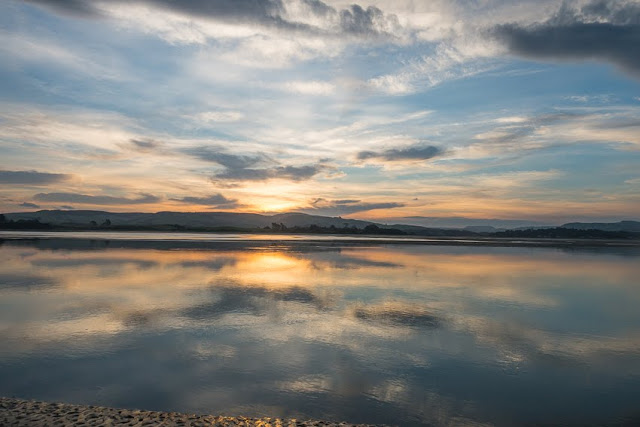 After 8 weeks it was time to leave. I needed to return to Wanaka to pick up my ski gear, get a contact lens for my injured eye, and get fit for my upcoming trip to Japan.