I arrived in Haast mid afternoon. It was warm and sunny, so after booking in to a backpackers and putting all my wet gear on the line to dry, I set off for a little recce of my trip the next day. First stop the Haast DOC office.

I'd already been in to the Wanaka office, and spoken at length with a friend of mine who happens to work there, who had walked the route late November. She'd told me what to expect regarding the route, in particular the large number of fallen trees I would need to navigate around, that the route mostly followed watercourses, and that the route markers were not always easy to follow. I was planning to use topographic maps I'd downloaded onto my phone, as well as the map and route following features on my Inreach satellite beacon. I wanted to trial their use on a fairly well marked route before using them on my trek in Australia in March, where we'll have no route markings whatsoever. I also wanted to gauge power usage of my devices.

I felt it was probably a good idea to pop into the local office and ask if there were any warnings or issues on the track, as it had been 2 days since I'd left Wanaka, and there had been some rain in the interim.

The woman who answered my query immediately informed me that the walk was a "route" not a "track", in keeping with the way that DOC classifies its walks. Apparently, to her, this immediately signified that I obviously had no idea what I was getting into. She informed me that I should not take the coastal route ( I wasn't planning to!) and then proceeded to interrogate me as to whether I had a beacon (yes), topographic map (yes again) and had let someone know my intentions (goddam I'd done that too!). Finally, after telling me about the windfalls and the dodgy route marking, she tried to put me off by telling me people had died on that track - not just the coastal route, but the inland route as well. What an absolute cow!!

I had a lovely feed of fish and chips and retired for the night, and the next morning drove down to Jackson Bay to begin the walk. I turned on my beacon, informed my friends I was heading off, and scrambled up the incline to the beginning of the track. 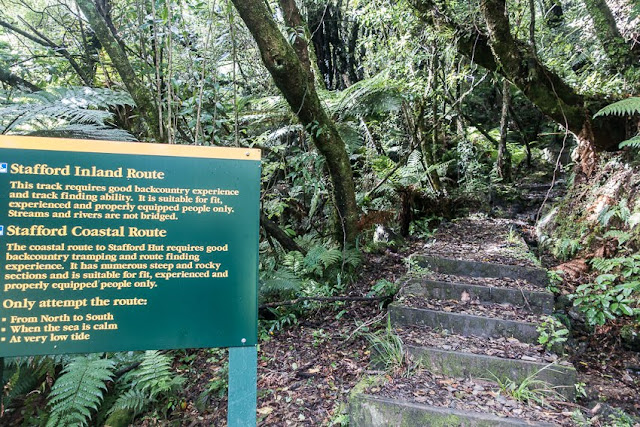 The first part follows a muddy, well marked track beside a small stream for about an hour to Smoothwater Stream, where the track forks. The route to Stafford Bay follows the stream upriver, so it's time to take the boots off and wade along in the shallow water in my crocs. Very pleasant, but slow going as you need to keep an eye out for the markers so you take the correct turn up the next stream. In fact I am pleasantly surprised that the route marking is more frequent than I was expecting, and my map and beacon also help me track where I am quite successfully. 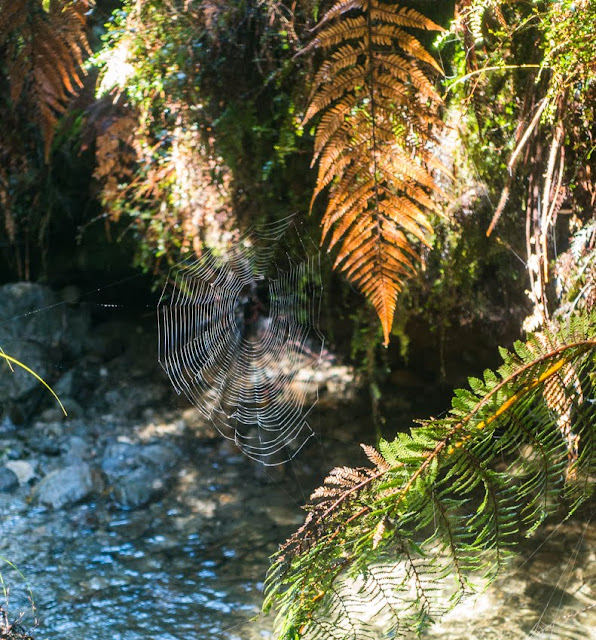 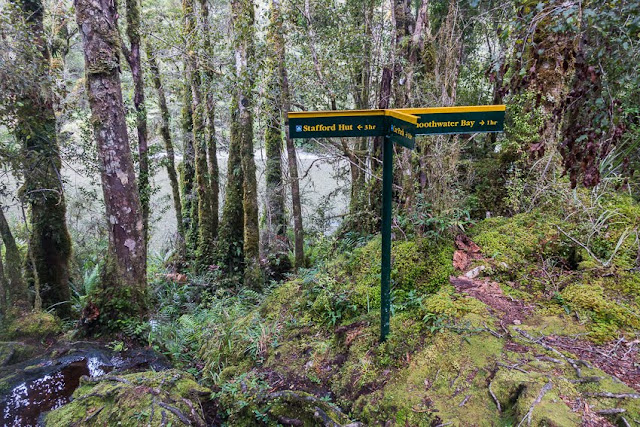 After lunch by the stream I put the boots back on again to climb over the Stafford Saddle. It's a 200m vertical ascent, and although steep in places it's a doddle after the Brewster. The descent brings me to another stream, which I follow all the way down to its confluence with the Stafford River. There's a lot of clambering over boulders and fallen trees, but its impossible to get lost when all you have to do is follow the water downstream. 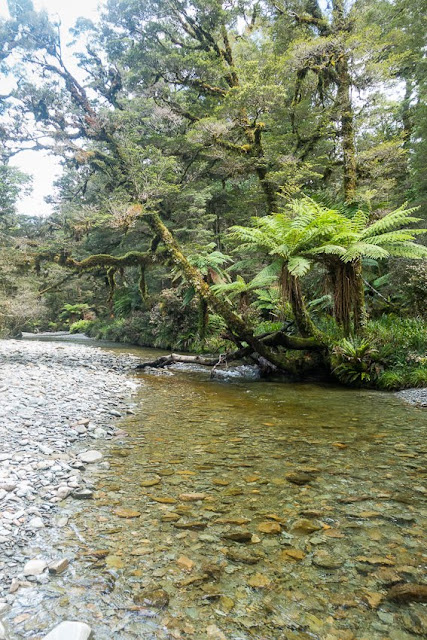 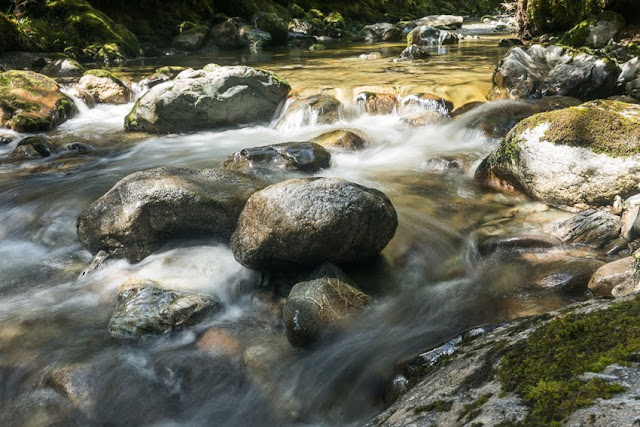 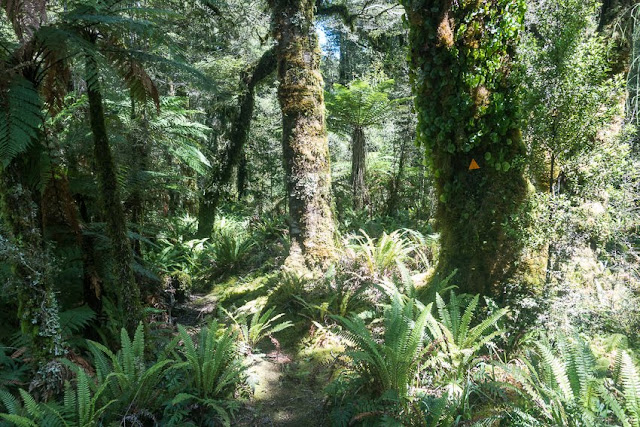 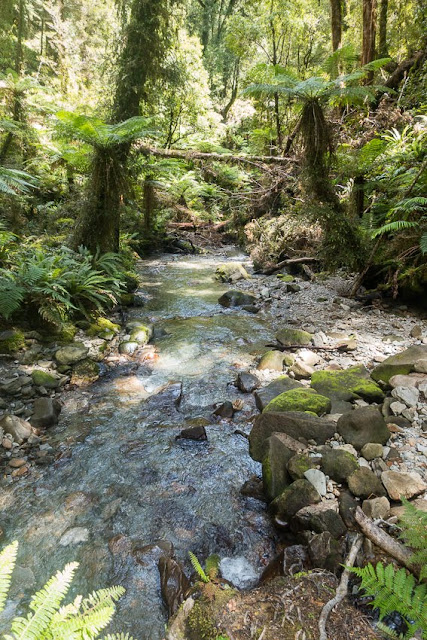 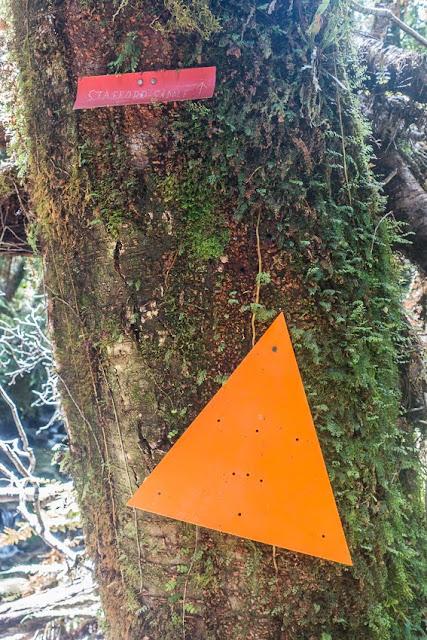 The Stafford River is a bit wider and deeper than the other streams, but easily crossed, and then it's a short stroll down to the Bay and the hut for the night. I'm the only resident, and I make sure to keep those pesky sandflies out. A short walk along the beach being dive-bombed by oyster catchers, and feasted on by sandflies sees me safe and sound back in the hut well before sunset. I have a nice wash in the river though, and dry all my clothes in the sun. 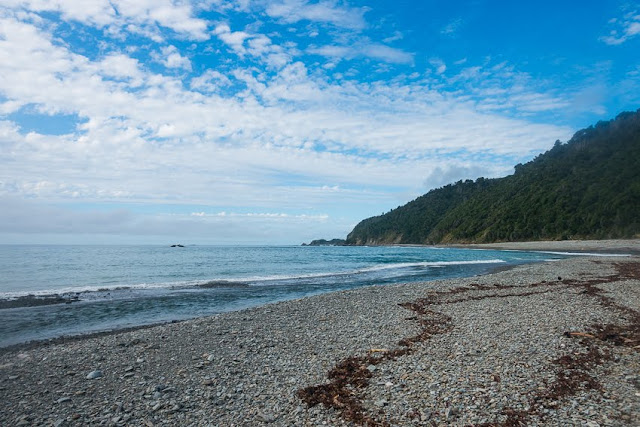 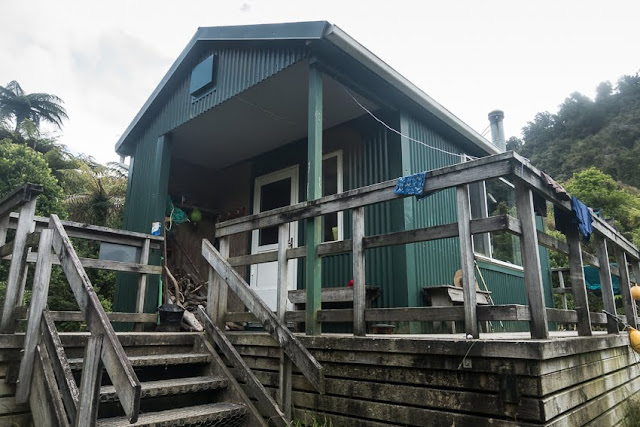 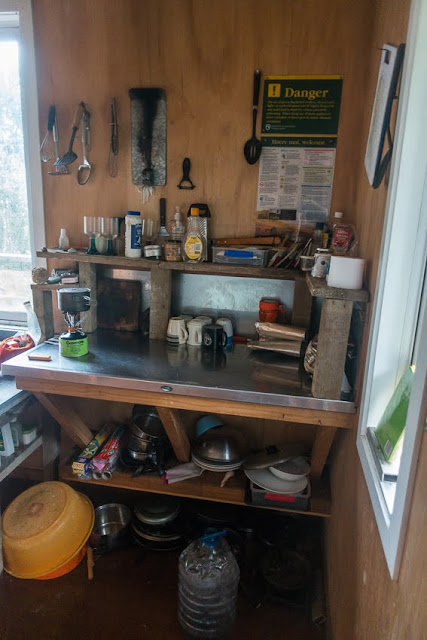 Overnight it rains, and next morning the clouds are low and there looks to be a lot more rain coming. I go check the river level and it has gone up a good foot. I decide it might be a good time to leave....

The walk out is done almost entirely in my crocs. Aside from the walk over the saddle, where I changed into my boots, I walked in the rivers and streams most of the way. There was a lot more water around, and places that had been dry the day before were now under water. It wasn't deep, or fast flowing, but it was impossible to stay dry so I just stayed in the crocs and plodded on. I took no photos, it was just too wet.

By the time I got to the car the sun was out and the skies had cleared. A quick wash in a nearby stream and some dry clean clothes made me presentable enough to go sample some seafood chowder at the food caravan in Jackson Bay. 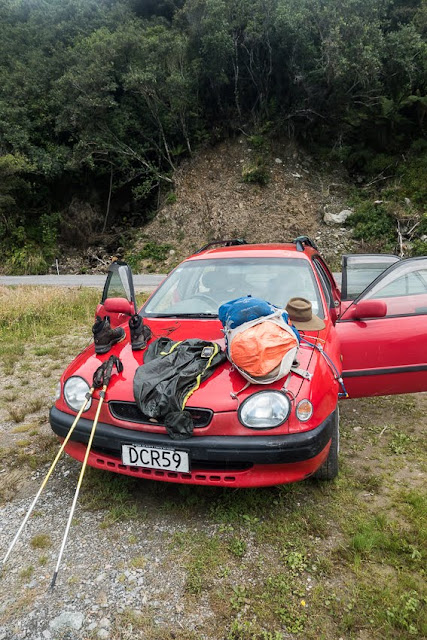 Then it was back over the Haast Pass to Makarora for the final 4 days of my self imposed bootcamp. 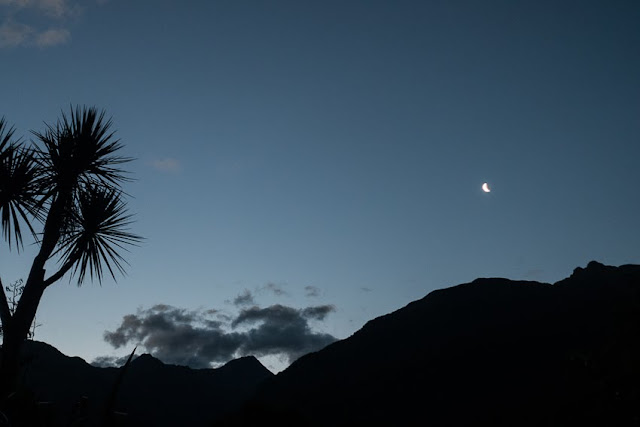