Exploring another part of Richmond Forest

After my last tramp I spent a week or so in Wanaka sorting out life admin and having my six monthly eye checkup, then headed north to Murchison for another packrafting meetup which I will write about in another blog entry. I had a great time, and paddled my first ever grade 3 rapid successfully, and without shitting my pants! Then I headed north into Marlborough, away from forecast rains, and contemplated my next tramp. I settled on an in and out along the Wakamarina Track from Butchers Flat.
The Wakamarina River was the site of a number of large gold mining settlements back in the late 19th and early 20th Century. These days there's very little left besides a few historical plaques and there's a lovely campsite at the end of the road. After camping the night I drove up to the track carpark and set off along the river track to Devils Hut.
The track follows a benched old miners track most of the way to Devils Hut, which is in a lovely sunny clearing, but quite high above the river. There's a bit of a scramble down and back up again when crossing Doom Creek, which has a bridge but the approaches both sides are pretty rough and not that easy to negotiate with a bike (the track is a popular MTB track). 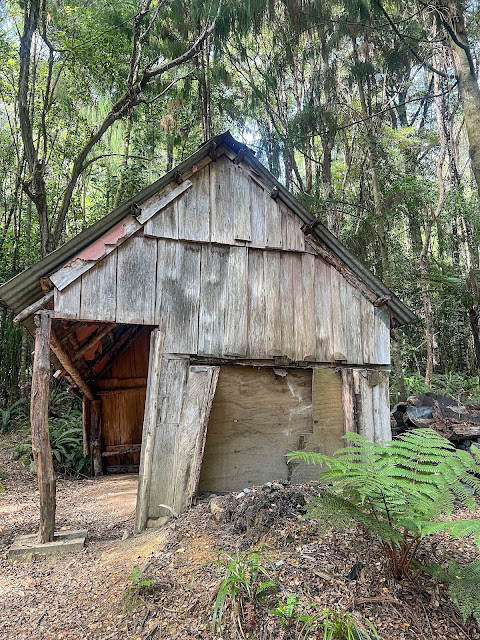 After lunch in the sun I began the long steep climb to Pt1068, a gain of 800m altitude in just a few kilometres. There were lots of switchbacks and I met a group of MTB riders having the time of their lives descending this rather technical track. For me, it felt like torture, mainly because I was completely unprepared for how steep it was and was giving myself so much grief for taking so long to cover the ground. In actual fact it took me 2:15 to do the climb and I later chided myself for giving myself so much negative feedback about my lack of fitness. My times were actually pretty good!
From Pt1068 the track descended quite steeply, into forest that was much wetter than the dryer western side. There were lots of Bellbirds, Tuis and I even thought I heard a Kaka.The track then sidled southeastwards, climbing slowly to Fosters Clearing.
There were two fellows sitting in the sun at the clearing having walked up from Onamalutu Road, a much easier route to the hut. Fosters Hut was a further climb from the clearing, perched on a grassy knoll with spectacular views across the Waiau Valley. 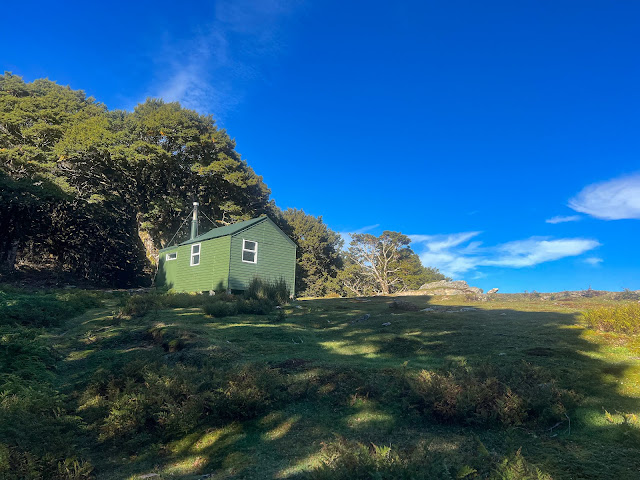 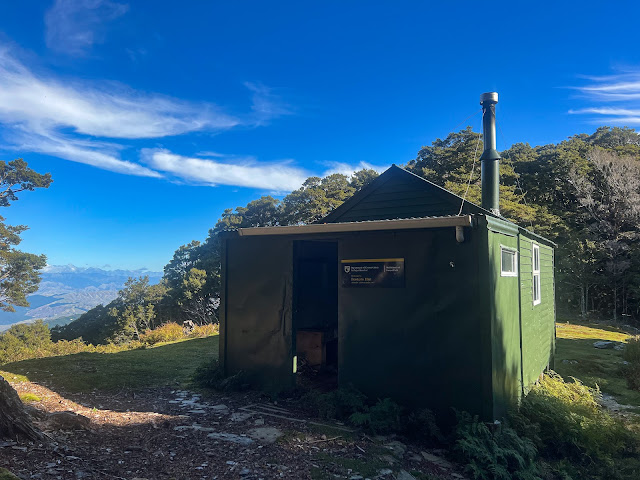 The total ascent for the day was 1100m! No wonder I was buggered! The very nice chaps had some whiskey which they shared, and I felt so much better after realising it wasn't my fitness at all, just a tough day.After dinner I wasn't long to bed and some much needed shuteye.
The next morning I woke to find it was already quite light. The boys explained that Daylight Saving had just ended, so clocks had gone back an hour. They left before me, heading back the same way. I had a leisurely cuppa and enjoyed the views, even though it was quite windy and chilly outside, and then headed off about 9am. 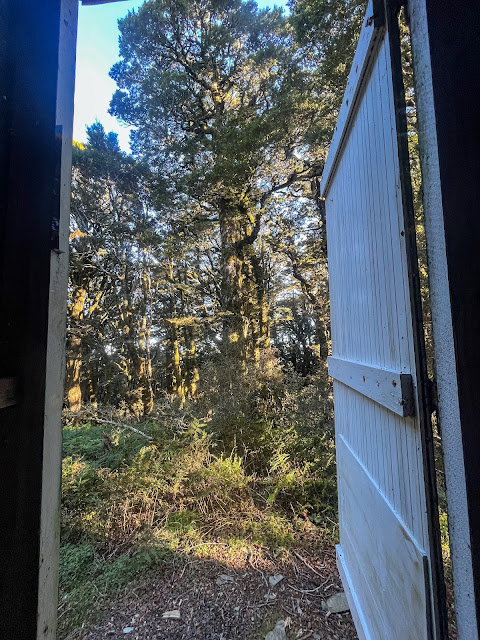 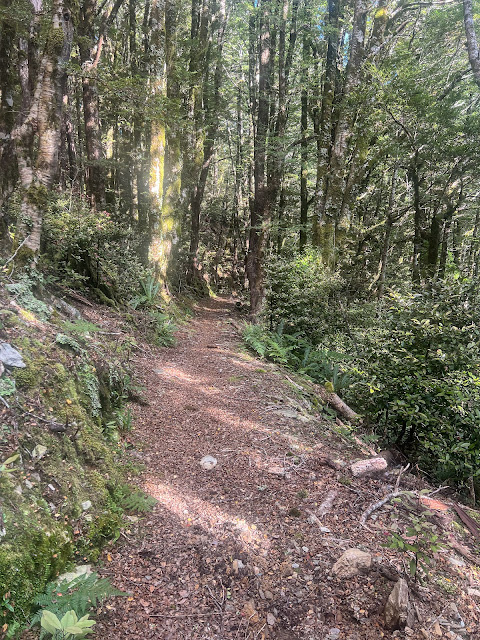 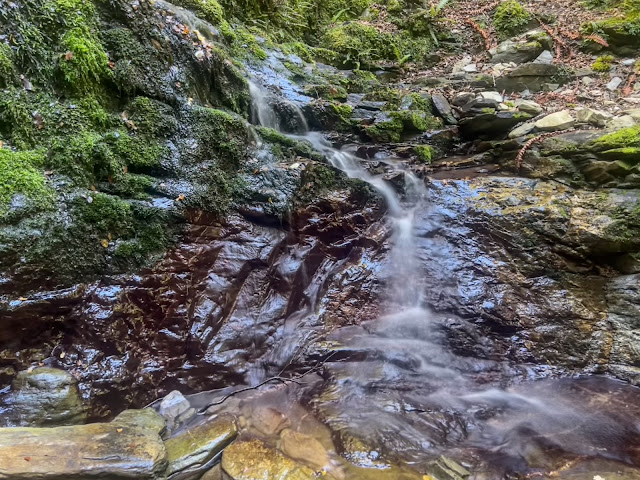 Once in the forest it was much warmer, protected from the cold wind. The walk back was mostly downhill and a decidedly more pleasurable experience being in a completely different mood from the day before. There was still the short and steep climb up to Pt 1068, where I stopped to boil up a cuppa and have an early lunch and sit in the sun.
Then down the switchbacks I went, taking me only 1:15 to reach the turnoff to the Stone Huts track. I decided to take the detour, which sidled slowly down to a river, which was nice, but not stunning. Across the river and upstream a bit were a couple of old stone walled enclosures, no chimneys or lintels or anything, very rudimentary. I'm not sure it was worth the detour. 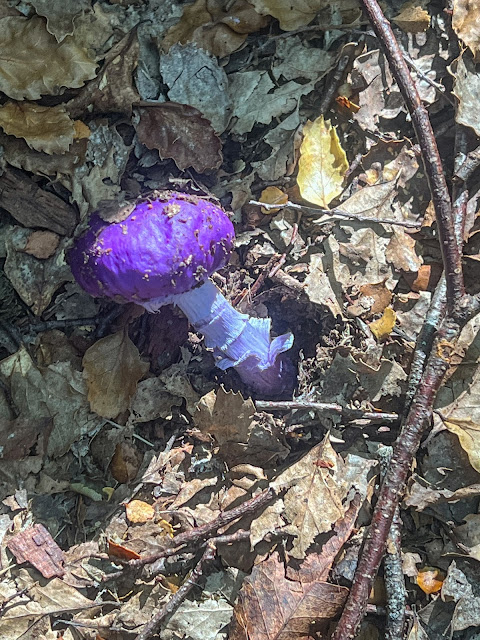 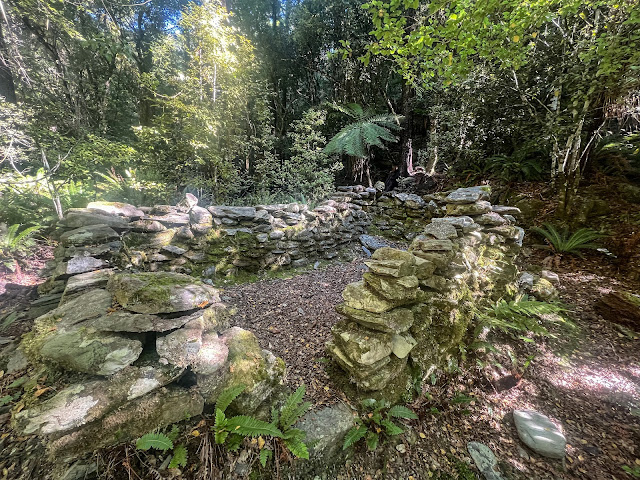 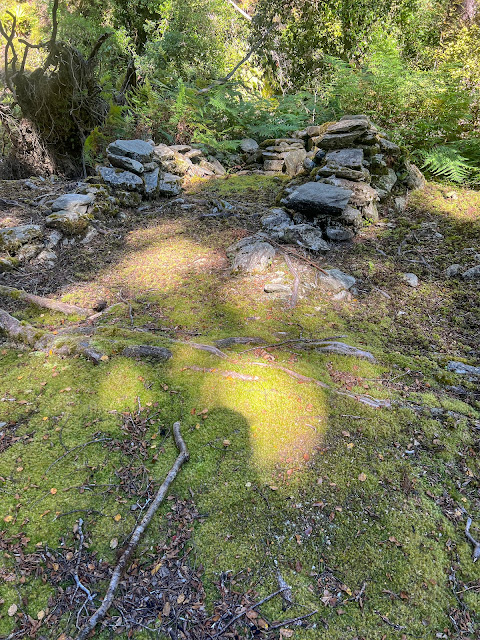 Back at the main track it was just another 10-15 minutes back to Devil's Hut. I arrived around 4 and decided to stay. I had a nice wash and hung out all my walking clothes in the sun, had a reasonably early dinner and bed. No one else turned up at the hut, a couple of families had stayed the night before (Saturday).
Rather than walk back the same way I decided to do the loop track up Doom Creek which would add an extra hour or so to the trip. It climbed upstream well above the creek to some old gold diggings at Foster Creek. Not that I could see any evidence of same. After crossing Foster Creek the track climbed up to then sidled along the hillside with a big recent slip  that needed crossing. It was stable, and easy to cross and soon I reached Doom Creek, where there were spectacular rock pools, waterfalls and what looked to be a small canyon further upstream. 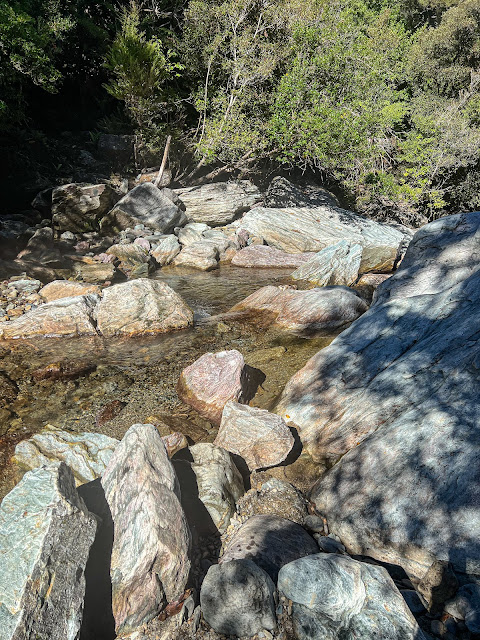 Doom Creek was stupendous and made the detour totally worth it. I crossed the creek, dropped the pack, stripped down to knickers and bra and went for an explore up the canyon a short way. There were numerous small pools and waterfalls and overhangs, just beautiful. It would be fun to explore further with others, even camp there on a hot day. You'd want the river to be low though. 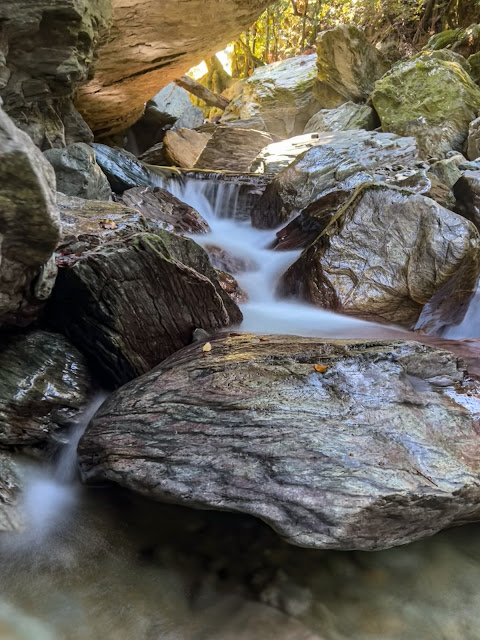 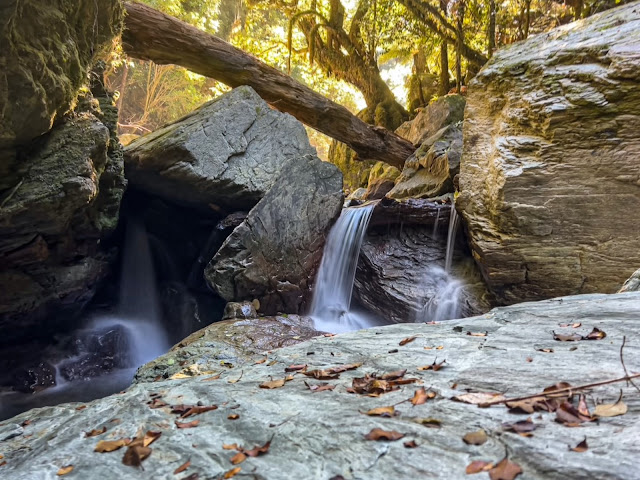 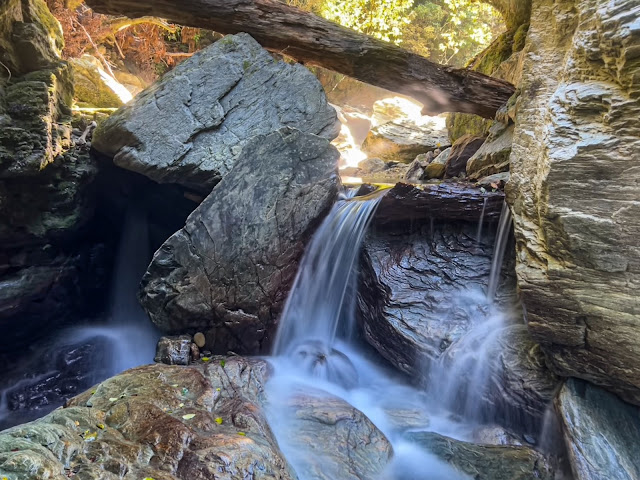 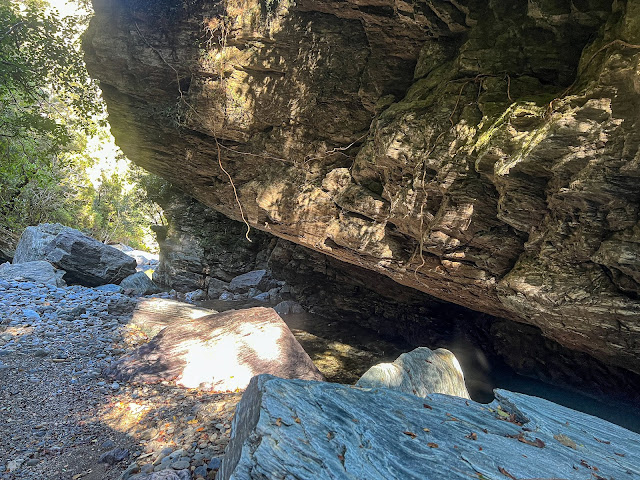 After a short swim I returned back to my bag, and surprised a couple of day walkers as they were crossing the stream. They didn't stop to chat, perhaps intimidated by my scantily clothed white body! No matter! I then sat in the sun to dry and made a cup of tea and again had an early lunch, congratulating myself on my excellent decision to include this loop.
Back into my clothes and the rest of the way back to the main track seemed to follow a water race. It was a nice wet forest with lots of fungi, mosses and lichen. Back at the main track I met the husband of one of the day walkers. He had his e-MTB but hadn't been able to get it up the steep scramble on the other side of the bridge, so was waiting for the walkers to return. His bike weighed over 20kg!! I picked it up, ouch!! We had a chat about bikes then I walked the remaining track back to my car.
A real up and down trip, both mentally and physically. But the next tramp was going to be a much more serious endeavour.
That's next.