Getting into Grade Three

No, I'm not at school anymore, though I'm yet to stop learning new things, on a daily basis if possible. In this case the topic refers to my ongoing journey in tackling whitewater paddling with my packraft.

When I first purchased my packraft back in 2019 I had simple goals. My purpose was to use a packraft to make a tramp a bit more interesting. To not be deterred by a lake or simple waterway but to use my portable craft to continue on.

Because of my double winters skiing, I'd not yet met many packrafting people in NZ. The annual NZ meetup happened in January, when I was in the Northern Hemisphere, but I'd been keeping an eye on things from the sidelines. I felt that the emphasis seemed to be too strongly focused on paddling whitewater, and after getting caught on a tree on my first packrafting outing with Arno I was less than eager to go anywhere near rapids higher than Grade 2, EVER!!!

Due to COVID I've been stuck in NZ for a couple of summers, so at last got to attend some packrafting meetups and begin to make friends and contacts within the relatively small packrafting community. My first meetup didn't really give me much confidence, tending to reinforce my initial prejudices about it's whitewater focus, but slowly, through more interaction and more paddling I now understand why that focus is there.

There are lots of people like me who aren't primarily interested in pushing the whitewater limits of packrafts, though there definitely are some hard core paddlers out there. I gravitated towards the "trampers who packraft" group, people like Stu and Jude who joined me on my Hollyford Pyke trip. Despite having each done it a number of times already, they loved the loop so much they were keen to do it again. We've now decided to try and make it a yearly event.

I learnt that many people within the packrafting community were interested in some of the trips I had done. Ones that crossed lakes rather than ran a river. They also had no problems enjoying floating down a Grade 1 river enjoying the spectacular scenery. It didn't have to be about the adrenaline rush at all.

I also began to realise that the whitewater focus came primarily from a concern around safety. People like Hugh Canard, who is NZ whitewater kayaking royalty, but now packrafts as he has got older, were concerned that the "tramping packrafter" didn't understand the rivers they were floating down, and with the increased stability of a raft over a whitewater kayak, could get into much more trouble by overestimating their skills. A kayaker needs a few more skills to tackle a Grade 2 rapid, a raft can just float it. So a packrafter may find themselves deciding to tackle a Grade 3 rapid without the skills needed.

The difference between a Grade 2 and Grade 3 is consequence. If you fall out in a Grade 2 rapid there's usually no consequences. There's an easy line not requiring much manoeuvring and usually a safe pool at the bottom of the rapid to recover in. A Grade 3, however, has consequence. There are moves you must make, to avoid holes, sieves or other hazards that could drown you, and falling out is something you'd rather avoid. However, the golden rule is if you don't think you could swim a rapid, you shouldn't run it either. That's when you should portage your extremely lightweight craft.

As mentioned earlier, I had decided early on that I was not interested in running Grade 3 rapids, and at the Wanaka meetup in January I didn't bother tramping up to the G3 rapid on the East Matukituki, instead just paddling an easy G1-2 back to the cars.

In February Jude and I paddled the Grade 3 gorge on the Mararoa, though we portaged the gnarly drops and the water was pretty low so it was probably 2+ at most. Both of us enjoyed the process of picking a line and deciding whether we would run or portage each rapid, running safety when required.

Then in March I joined Brendon Nevin and a group of others for a few days on a mini-meetup at Murchison on the mighty Buller River.

The first day we paddled for many hours on a rather low Buller, putting in just above the Owens river confluence and getting out at the campground in Murchison. I was quite tired after the long paddle, so decided not to paddle that afternoon on the O'Sullivans rapid, a Grade 3 rapid further downstream. The gang ran safety and talked people through, as it required hopping between eddies. I watched, but didn't feel intimidated by looking at the rapid, deciding that I would have given it a go if I hadn't been quite so tired.

The next day we decided to tackle the Maruia River. It's a gorgeous section that starts beside the highway then disappears into the wilderness for many kilometres before reemerging next to the highway for an easy takeout. We just needed to leave a few cars at the takeout and drive the rest up to the put in.

There were a few Grade 3 rapids on the run and when we got to the first one I had a good look at it and decided I wasn't going to run it. Then I watched others run it, and decided that perhaps it wasn't that scary, and that maybe I should give it a go. So I did.

The first part of the rapid required paddling across the rapid from right to left to get into an eddy on the left hand side. There was someone running safety from that rock who then gave us instruction on how to get through the next section. That involved ferry gliding across to some rocks and then breaking out to paddle like crazy across the current towards the right. I did it, and even have the video evidence!

Once I had cracked my first Grade 3 my confidence level grew. I ran the rest of the rapids, even leading down one of them. I was stoked!

The next day my eyes were sore from paddling without sunglasses so I sat out a paddle along the Matakitaki, but on the fourth day I joined the Wellington crew for a paddle down the upper Wairau. This river had been super pushy when I'd paddled it the first time at the St Arnaud meetup, but this time the water levels were much lower and it was a really enjoyable paddle, with just a little bit of excitement. 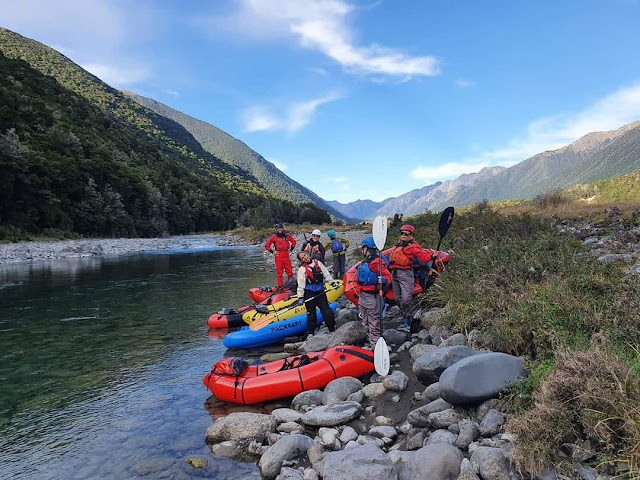 In April, a few of us gathered again at Murchison for some paddling. There were just four of us: Kelvin, Liz, Julie and I. Kelvin and Liz had just finished doing a course with Daan at the NZ Kayak School, and Daan had recommended paddling the earthquake rapids as the water levels in the Buller were real low. This made the rapids Grade 3 rather than 4-5s, so I decided to give it a go.

We had a great day. Kelvin and Liz are so experienced, and very safety conscious, so we scouted the rapids well before running them. Gunslinger was perhaps the most gnarly of them, but my ability to get into the eddy I'm aiming for is pretty good now. 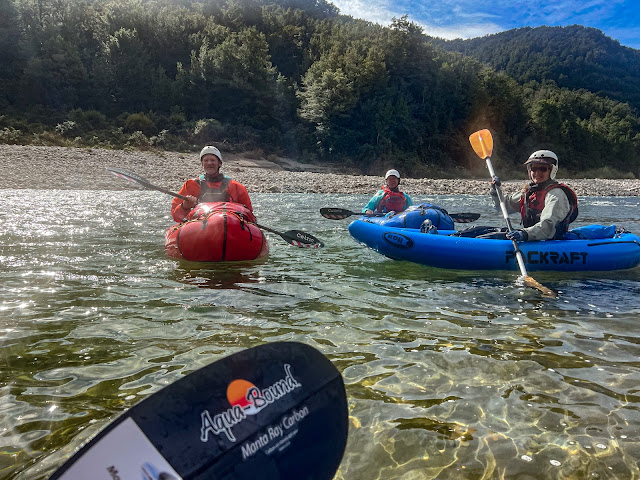 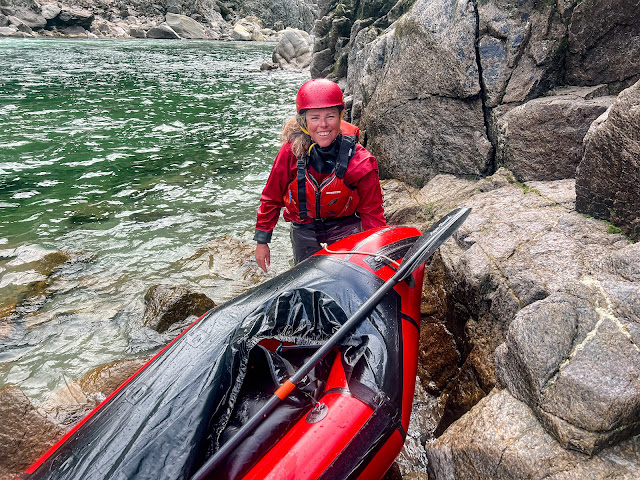 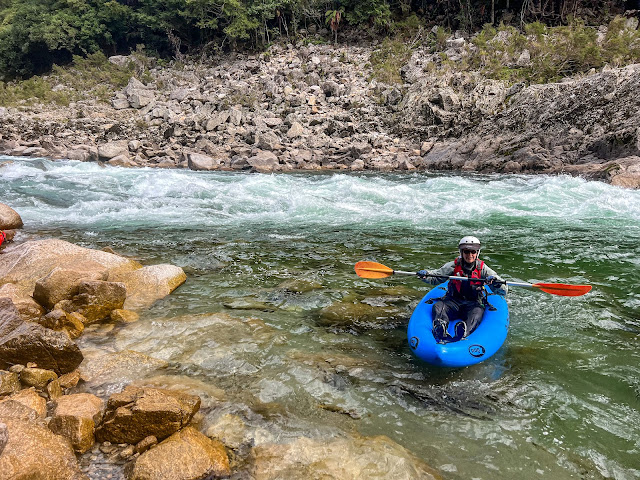 Lower down there's a wave near the Lyell confluence. I didn't try to ride it, but the others did, with varied success. Julie tipped out and lost her boat, and Liz couldn't get to it in time before it disappeared down the next drop. I was on a rock filming, so no help from me. Liz and Kelvin headed off to catch the boat and Julie walked along the river edge. Meanwhile, I capsized on the next drop and had to self rescue since no-one was around to help me. It was a big pool below the drop so an easy self rescue by swimming to the side and into shallow water holding onto all my gear so I didn't lose anything.

Kelvin came back and ferry glided Julie across to the other side of the river where she could walk easily to where her boat was, rescued by some kayakers who had been playing further down the rapids. I ran the last rapid without drama and then it was an easy paddle down to the take out. 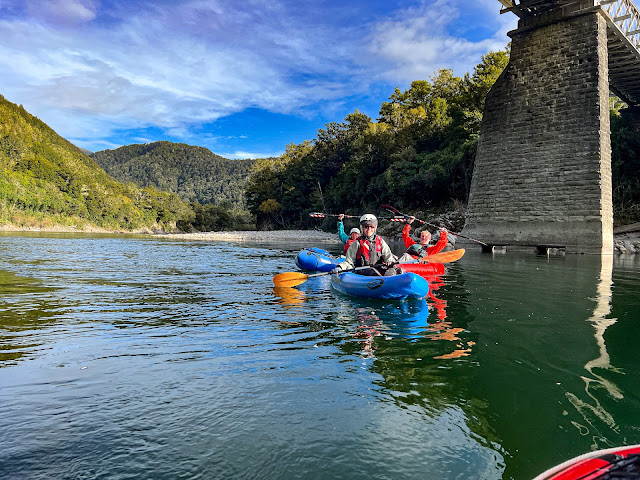 The next day Liz, Julie and I paddled the Matakitaki middle section. We'd run that before at the St Arnaud meetup, (the others had also paddled it in March) and although low, it was still navigable and a gentler experience than our more exciting previous day. 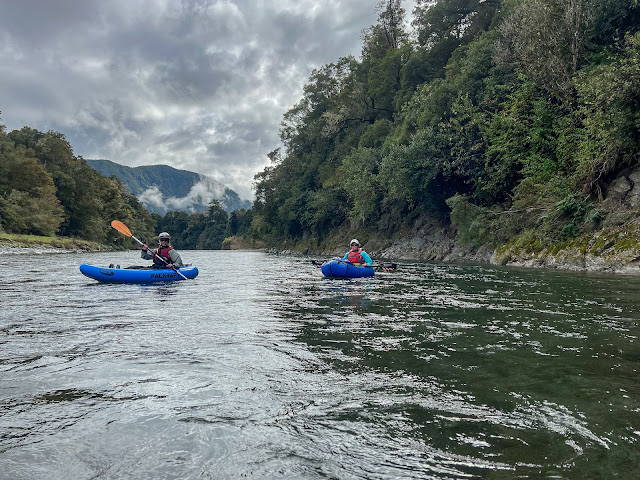 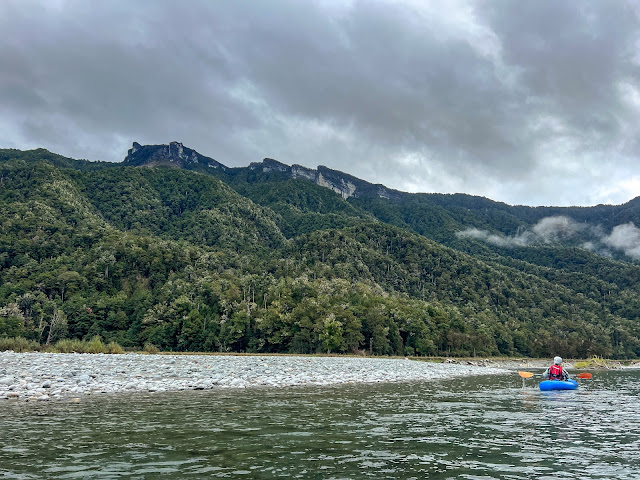 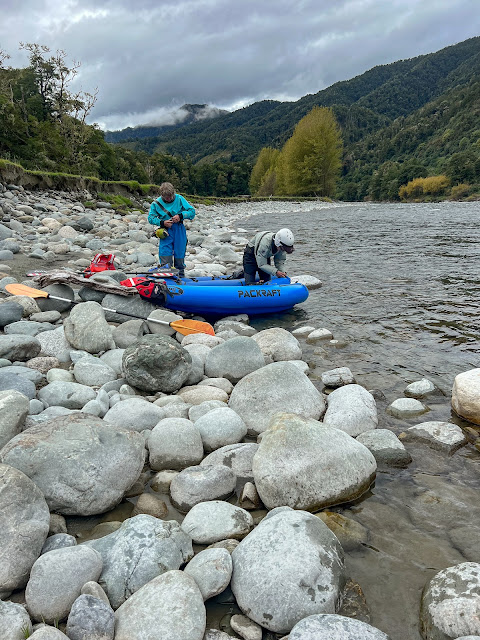 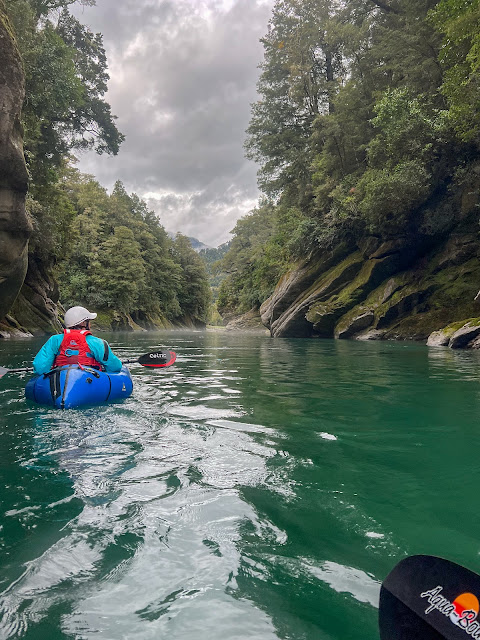 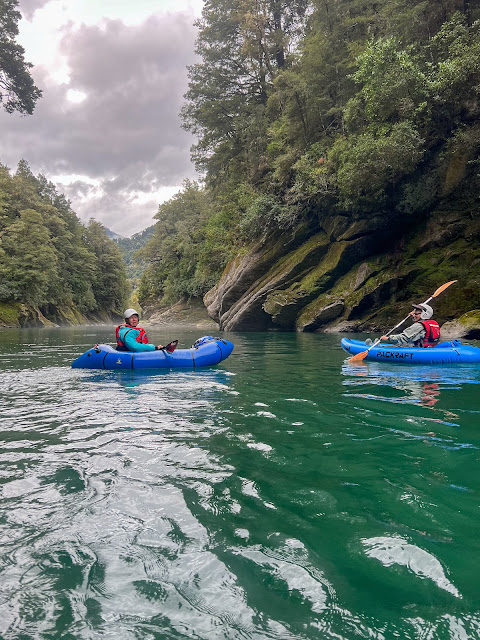 The following day was raining, so the rivers started to rise. It was also my birthday, so Liz and I had a leisurely brunch at the local cafe then browsed the shops before scoping out the Mangles for an afternoon paddle. In the end apathy got the better of us and we didn't bother getting wet. 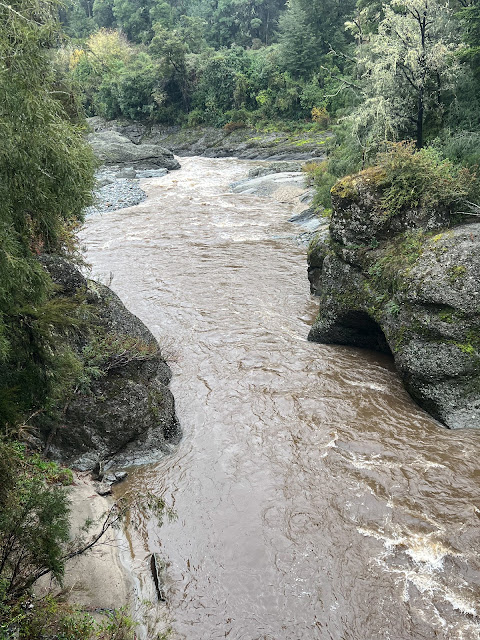 I now feel like a competent paddler. I know I have the skills to decide whether I will tackle a Grade 3 rapid or not, and also the confidence to happily say no and portage if I'm not up to it. Of course it's all very well saying you can paddle Grade 3, you still need to have fellow paddlers with you to ensure safety. So don't expect to see me doing any radical tramps with gnarly paddling sections any time soon...

But the lesson is: Never say never!