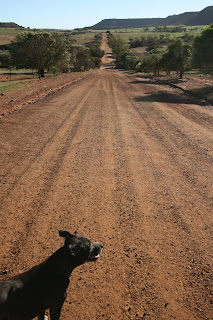 Tuesday we do our regular Greenough River walk. This is a 17.5km round trip, which was made a bit more exciting this week because we actually had to swim across the rivermouth. The week before we'd opted for caution and just walked 2 hours then turned around and walked back, but this week the river was much lower so we decided to brave the crossing. The tide was coming in, I didn't bring the camera, and we were getting low on drinking water, all reasons not to turn around and walk back for another 3-4 hours. The deepest part went up to my armpits, so some swimming was required, but the current was sluggish and aside from being a bit cold and wet for the drive back home, it was quite the adventure.
Sundays we try a different place each week. Today we headed a bit north of White Peak, to a dirt road heading east off the highway. This road heads up past the original White Peak homestead and through a gap in the Moresby Ranges - the name given to some very non descript flat topped hills just inland from the coast, who the heck was Moresby? We'd done a rece last Sunday, and Sally and Sheridan had done further exploration up the side roads midweek to work out the mileage - roughly 15km all up.
The road is undulating farmland, which is really pretty at the moment with green pastures and native bushes on the road verges beginning to bloom. It may be approaching winter in other parts of Australia, but the flora round here takes every opportunity to put on a show given a bit of rainfall followed by some warm sunny days. Hakeas, grevilleas and some acacias are blooming, as well as the occasional banksia. 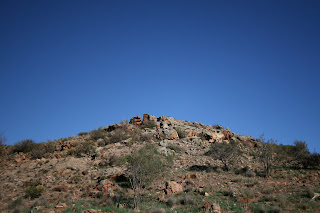 We began by walking into a strong easterly, which was a little chilly, but kept the flies at bay - as we discovered once it died down. Turning north on Careys Rd we walked past the ubiquitous rocky breakaways that are such a typical part of the mid western landscape, with farms and the uncleared Moresby Ranges on our right. Once we'd reached the end of this road we headed back south again, though were stopped by a local who has offered to allow us access across some private property to the Moresby Ranges. Problem is, we arranged it for next week, then I realised I've got other commitments and can't make it. Sally and Sheridan will have to let me know how it went. 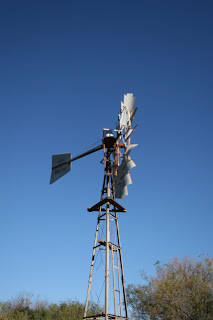 Returning to White Peak Road, we again turned east, passing the old homestead, with a wonderful dilapidated old building covered in ancient bougainvillea and remnants of a stone walled enclosure, through the gap and eventually to the end of this road. Great views back to the coast, and across to our pimply friend whom we climbed last week and an undulating walk back to the van. Definitely a very pleasant Sunday stroll.
PHOTOS