Today, something I have been coveting for a long time arrived. It's a tent. But not just any old tent, it's a Force Ten tent.

Back in my mid twenties, after I toured China with mum, almost died in Thailand, and got held up at gunpoint in Pakistan (you'll get that story one day), I ended up in the UK, bought a bicycle and proceeded to do quite a few months of cycle touring. At the time I didn't know more than how to fix a puncture, but I managed. Actually, I still don't know much more than that!

After touring Ireland, working over winter, and recharging the batteries in Egypt, I bought myself an awesome little touring tent and headed off for the wilds of Scotland. And rather than staying in hostels, as I'd done in Ireland, I free camped on some of the most amazing beaches throughout the inner and outer Hebrides. It was bliss. 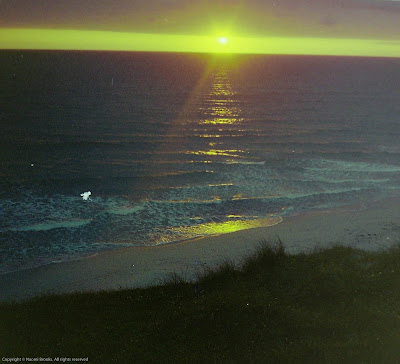 Part of that bliss was having the right tent. Staying warm and dry, and coping with strong winds, were all prerequisites for the tent I needed, and I'd spent up big buying myself this strong little one man Force Ten tent, which served me well. Man I loved that tent.

I've scoured through my photos, but no pictures of the tent were ever taken. Now with digital we take so many shots, back then you'd rather take a piccie of a pretty sunset than of a bloody tent, especially with only 12-36 photos in a film canister. In fact, I have a grand total of 40 shots documenting an entire 2 months of travel. Gosh haven't times changed.... 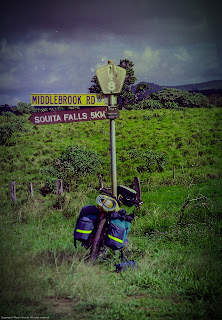 I loved that tent so much I brought it home to Australia. I sold the bike, kept the tent. I bought a new bike and when I went cycle touring through the Atherton Tablelands in Far North Queensland the trusty little tent came with me. And then I gave it to my younger brother to take on his world trip, and never saw it again. I never did ask him where that tent ended up going to...

Of course for many years I've had no use for a dinky little lightweight tent, preferring instead to go car camping with all the mod cons. I mean these days I have the fully kitted out solar self sufficient camper trailer for all my luxury camping needs. But just sometimes, you do want to walk somewhere, and you don't want to lug anything heavy with you. 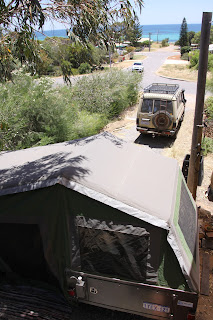 When I went to SE Asia in 2008/2009 I took a Hennessy Hammock. It's a really awesome piece of kit, but not always practical, as it requires posts, big rocks, trees or something fairly substantial at any rate, at both ends for securing the hammock. I quickly found out on my volcano climbs in Sumatra, that a tent has more versatility because above the tree line there are.... no trees! Was great in the jungle though. 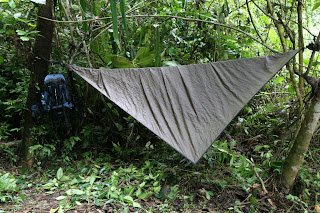 I'd been thinking about purchasing a new lightweight tent for some time, as I'm at some point contemplating some long distance hiking either in Australia or New Zealand. Perhaps even the US or Europe. Huts are becoming more common, particularly in NZ, making a tent less necessary, but any back country hiker knows a tent may be their only chance of survival should they get caught in inclement weather a long way from shelter. But I adore camping in the middle of nowhere, just you and nature, and not having to share it with another soul.

For over 2 years I've been coveting a new Vango Force Ten tent, and last month I bought one. I've gone for a 2 man tent because the weight difference is negligible but the extra space well appreciated. I haven't done a trial erection yet, but I thought I'd share the little blurb that came with the tent, because it's exactly how I feel, and have always felt since that first tent all those years ago. 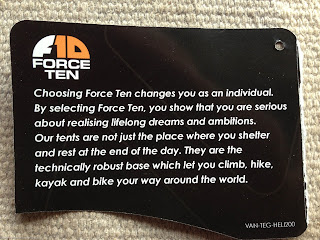 Doesn't that make you want to go adventuring?