Excuse me, there's a baby seal in my soup!

You go places and you hear about the wildlife right? About how you can see whales, and dolphins and seals and sea birds blah blah blah. Of course you expect you'll have to pay someone a pretty penny for the privilege. And then there's Kaikoura.

Admittedly, going out on a boat to experience the whales and dolphins will cost you a minor fortune, but luckily, the seals come for free. They are frigging everywhere!!

Kaikoura is about 2 and a half hours drive north of Christchurch, but I took all day due to numerous detours down roads to cute beaches, including these awesome cliffs near Gore Bay. 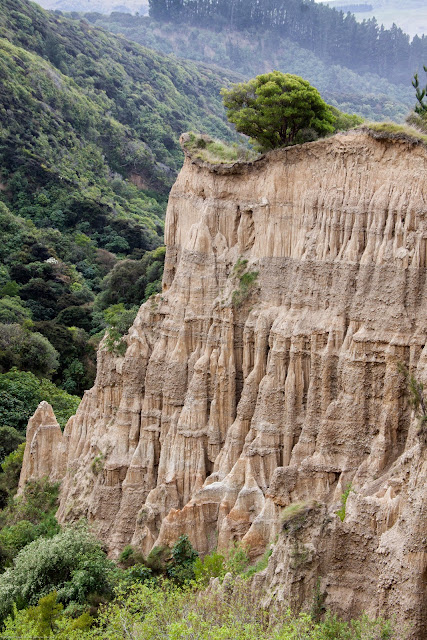 The final drive into Kaikoura hugs the ocean, alongside the railway line, because the mountains literally meet the sea around here. The highway passes through numerous small tunnels and would be an enjoyable scenic drive, but for the chance of being rammed up the arse by a big truck if you slow down too much!!

Kaikoura sits on a small promontory, sandwiched between the sea and the mountains, with a deep ocean trench just offshore which attracts all sorts of pelagics to feed in the upswelling currents of nutrients. This is the place to see sperm whales, as well as southern right whales, both almost hunted to extinction back in the bad old days when we needed whale oil and hadn't worked out how to drill for fossil fuels. It's sobering to think how much we humans have plundered our natural resources in just a couple of hundred years... 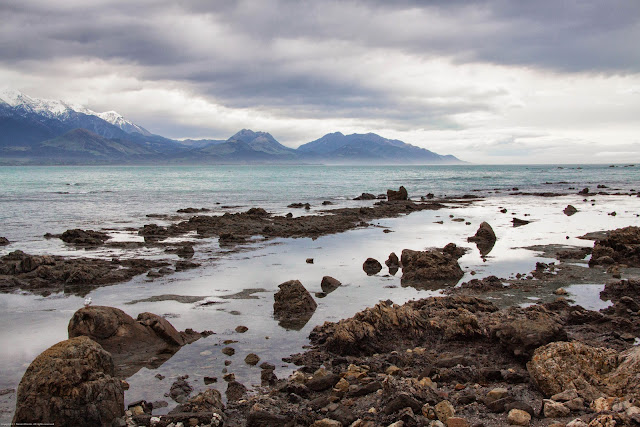 It's not really whale season at present, and far too freaking cold to go swimming with dolphins, so I saved my precious pennies and headed out to trek the peninsular loop instead. Oh, and acquaint myself with a bunch of lazy old seals sunning themselves along the promenade and in the carparks. 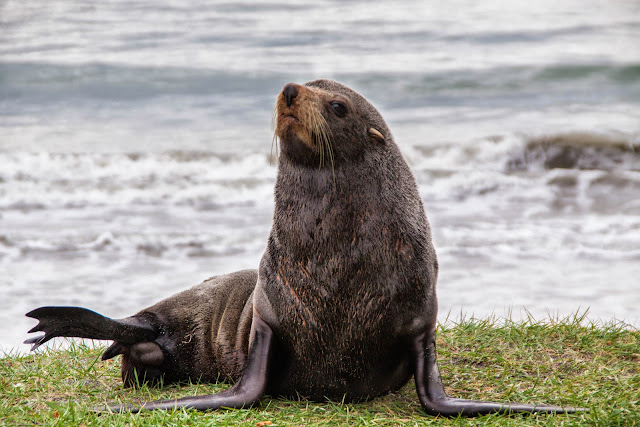 I don't know of that many places where seals live in such close proximity to human habitation, or where the authorities allow such intimate interaction. I suspect quite a few tourists get attacked and bitten each year in their enthusiasm to get photos, but with a no blame insurance policy in NZ, I guess the authorities can just put up the warning signs and leave the punters to take responsibility for their actions. Seems quite sensible really.

The walk along the cliffs is very pretty, but a sunny day would have made the colours sing more. Then again, I am in New Zealand....

Home of hobbits and faeries... 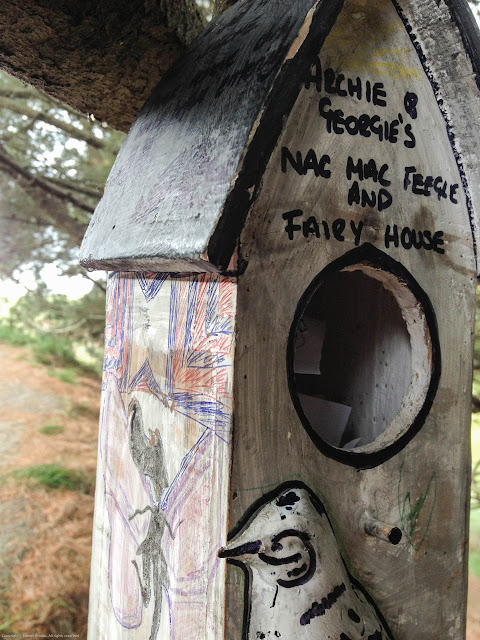 The following day I headed up the highway a few clicks to Ohau (yes another one) Stream, where baby seals hang out in a large pool with waterfall whilst their mums head off to sea to feed. When the babes get hungry they head back down to their birthing rock and wait for mum to return so they can get a feed. When mum thinks they are big enough to wean off the breast she just doesn't come back. Then our hungry chappy has no choice but to head out to sea to find himself some fish. I'm thinking there might be a few orcas hanging offshore waiting for this little opportunity.... 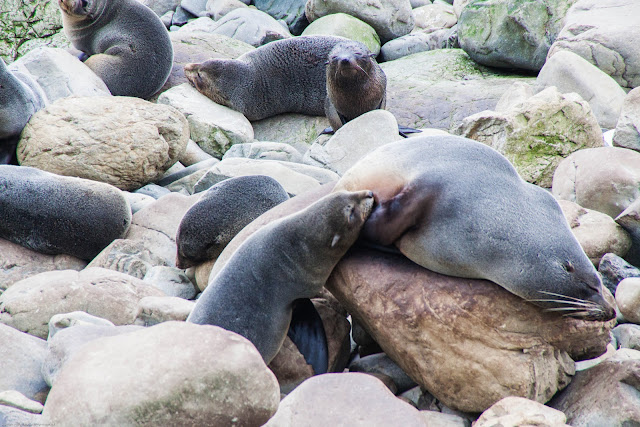 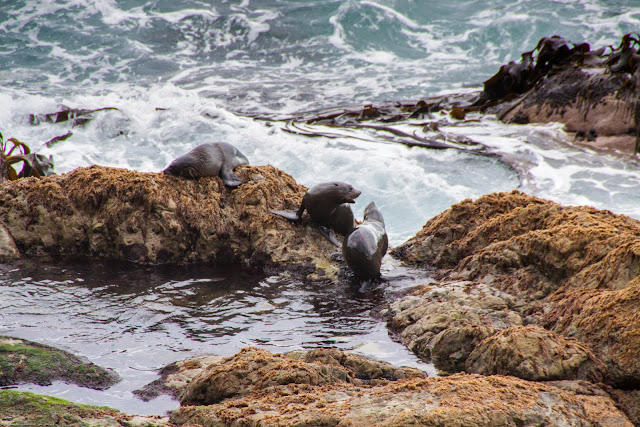 So here's a few photos of this wee stream and waterfall. They station a volunteer ranger up there to stop the tourists getting too friendly with the wee ones. He told me a month ago there were over a hundred babies in the pool!! Imagine that.. 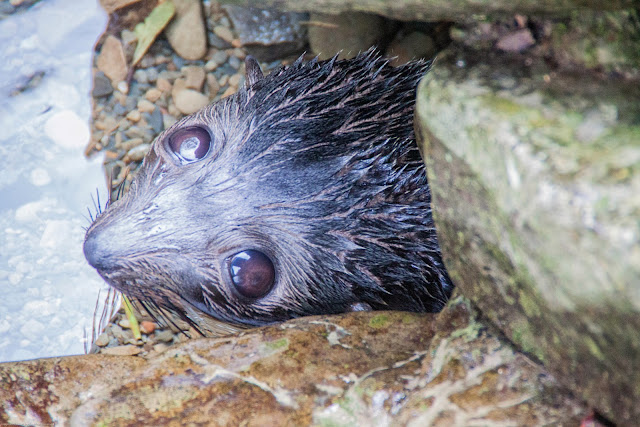 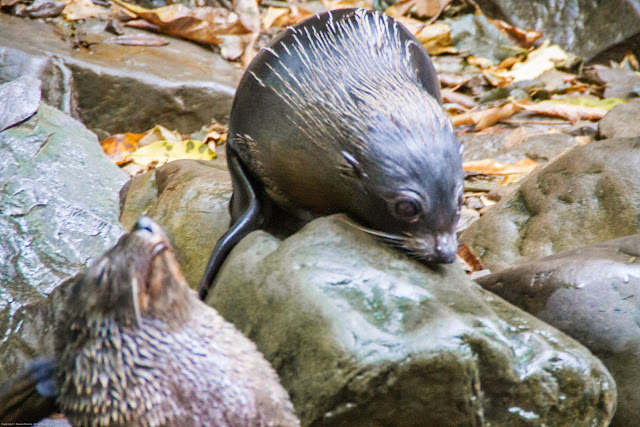 And a little video of them swimming in the pool here

On Monday, the sun came out. I almost stayed another day, but I decided to have one more attempt at reaching a club ski field. That's next! 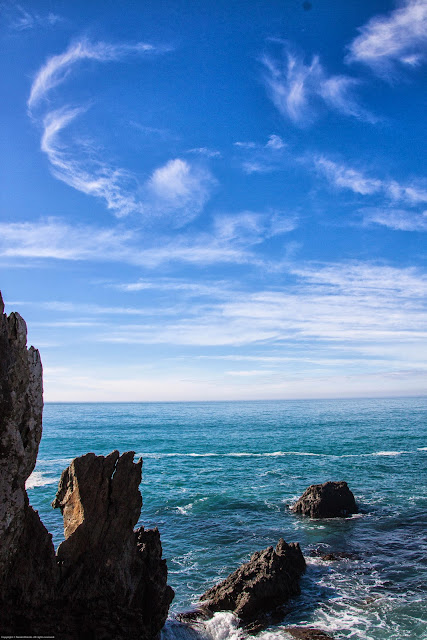