In the lap of the gods

I'd heard that Olympus had good snow cover, that it hadn't lost its snow with the heavy rainfall over the last few days, and was good spring skiing. It was either there or Mt Hutt and I desperately wanted an authentic club skifield experience. Plus I had a Chill Pass, meaning I could ski Olympus for free. So off over the Rakaia River I went to Windwhistle and turned left into the mountains.

It's freakishly remote up there. The bitumen turns to gravel, then soon you are on a narrow winding track heading up a valley. The scenery is jaw droppingly spectacular. This is someone's sheep property, and up the top of this mountain somewhere is a ski field! 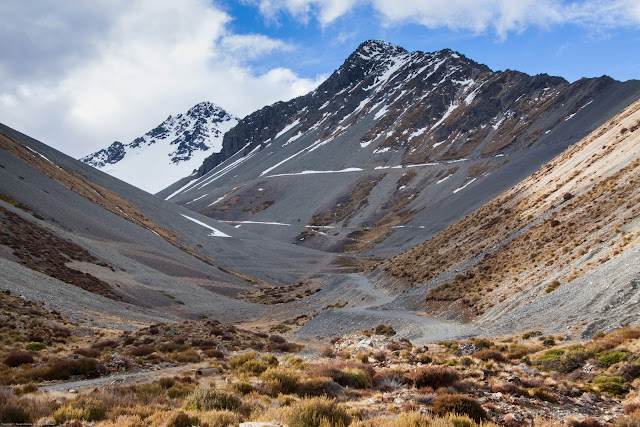 I arrived at "the bottom hut" about 3:30pm and radioed up to "the top hut" to find out if the road was clear. It was, but I had a little food left to cook, and could save a few pennies staying overnight down below. I've stayed in worse backpackers hostels than this hut, it was so cosy! 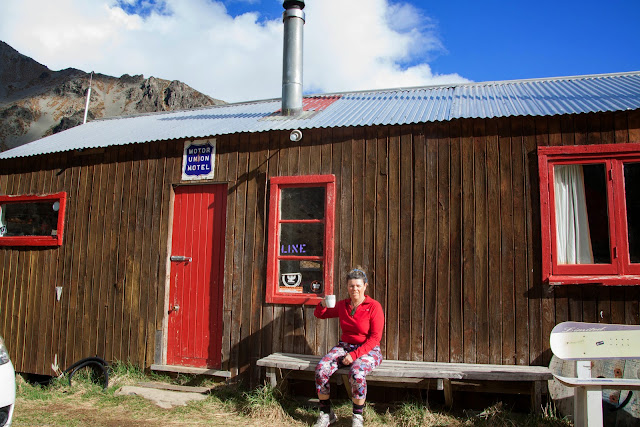 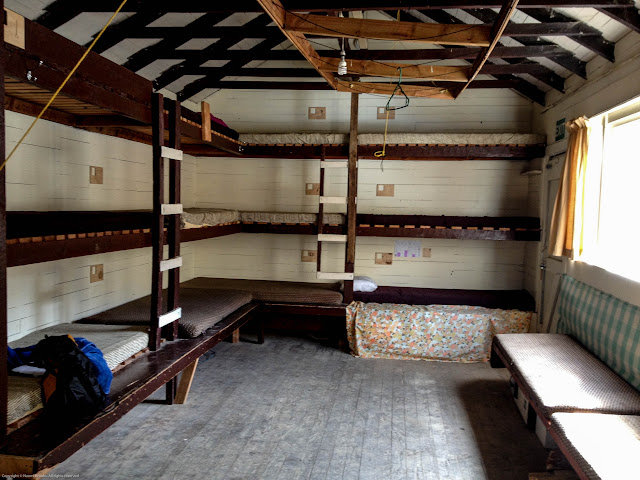 Sitting by the fire with a full belly watching videos on my laptop, a car drove up, the door burst open and two lads from Melbourne loped in. They were continuing up the mountain and needed to radio ahead to let the top hut know they were on their way. Because you've got to take a rope tow and ski up to the top hut. They gave me some very helpful advice for the morning and off they went.

Next morning I headed up the shale track to the top carpark. This is not a road for the faint hearted, and making it up there in my little 2WD chariot, even without it being icy or needing chains, was a test of skill and nerves. I almost got bogged in the soft stones, but I just reversed back down and tried a new approach. Dodging the large rocks brought down by slides also took a bit of concentration.

Up at the top carpark I found myself a tow belt and nutcracker in the shed, hoisted on my backpack, donned boots and skis and proceeded to the first rope tow of my life. The lads had suggested I radio up and let them know I'd never used a ropetow before, because this particular one is fast and pretty tricky. Down came Ange, one of the patrollers, who took me through the process. Thankfully, she stopped the tow, I clamped on, and then she turned it back on, so it was relatively painless. I just needed to make sure I kept my hands out of the way of the pulleys, and kept the rope on them. Here's what I'm talking about:


At the top of the access tow are a few other tows. The main tow takes you up the mountain, the other takes you a short way up so you can ski over to the top hut. I chose to walk. Being a resort skier, I've never spent much time with a backpack on, and this one had all my gear for the next few days. Falling over with that weight on my back wasn't something I wanted to experience, particularly if the falling over was me trying to get onto a rope tow! So the walk of shame it was!!

The Top Hut is a true mountain lodge. A large area for dining and socialising, as well as a verandah facing the hill, a well stocked bar with commercial espresso machine, a very warm drying room, great bunk rooms with individual storage space and reading lights, and a hot tub. Yes, a hot tub!!

This is a ski in, ski out experience. You literally clip out of your skis, drop your poles and walk on in to the hut. And everyone is so friendly and welcoming you feel right at home within minutes. A good coffee helps too..

After meeting the few other hardy souls who'd come up the hill and the staff who keep the field ticking along, it was time to don the nutcracker and learn how to ride a rope tow. Let me just say this took a long time, and a lot of very friendly and helpful advice from everybody else. And I got some very impressive bruises for my efforts in the most bizzarre places.

By the time I managed to coordinate myself and make it up the hill it was getting on for lunchtime, and the visibility was pretty soupy. I asked a couple of young lads the way down and they suggested I follow them, "jumps being optional". All very well if you can see the kicker to avoid it in the first place! Raw nerves sliced to bits, I shakily arrived back for lunch.

After lunch I headed out with Peter, a chap from Cairns who normally skis at Craigieburn, but they were closed weren't they. He's a telemark skier; that's like going down a mountain doing lunges. Respect!! We did a few runs and I started to get a feel for the mountain terrain (nothing is groomed here) even though the visibility was shit. I was way out of my comfort zone, but I persisted.

The following morning we woke to the beautiful silence of snow falling, quite a surprise given the warm conditions, although it had been freezing getting out of the hot tub the previous night!! Once the mountain manager and staff had dug out the tows and assessed the safety of the snowpack we headed out into the white. I didn't do too well by myself, but went out later with Heather, a local lass, and we skiied the tow line where we could actually see. It was lovely soft dry snow, but by late afternoon it was pretty sloppy and sections of snow were breaking away. Only small, but still avalanches. This is a mountain where you always ski with a beacon, shovel and probe.


Thursday dawned sunny with blue skies, so we followed the sun skiing corn till it got too heavy. Some of the flatter sections became very gluggy, which caused a few hilarious sudden stops! The sun gave me a chance to bring out the GoPro, so you get to laugh with me. Imagine having to do a fast descent to get across a long flat section without poling. That's this clip.


Then imagine that the flat section softens up and gets a bit gloopy, creating a pretty effective brake, and you take the descent at the same speed without realising what is about to happen.

Olympus was a real eye opener to me. I met people who don't mind trekking or skinning to find some good skiing, who take safety very seriously, but also don't mind just sitting around marking a school paper, or watching the America's Cup, rather than skiing every hour of the day. The club atmosphere, the well stocked bar, the crazy cocktail combinations, the great food, and a nightly soak in the hot tub all made it an experience I'd like to repeat. 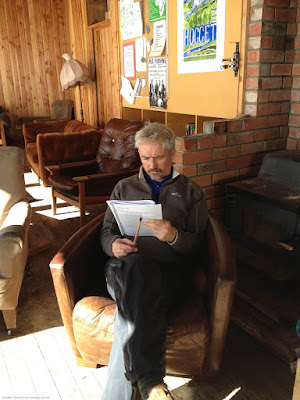 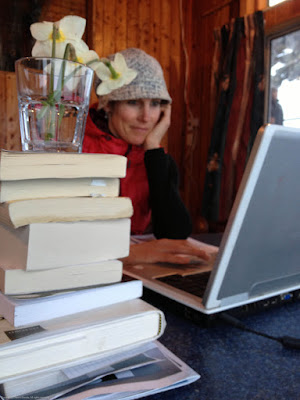 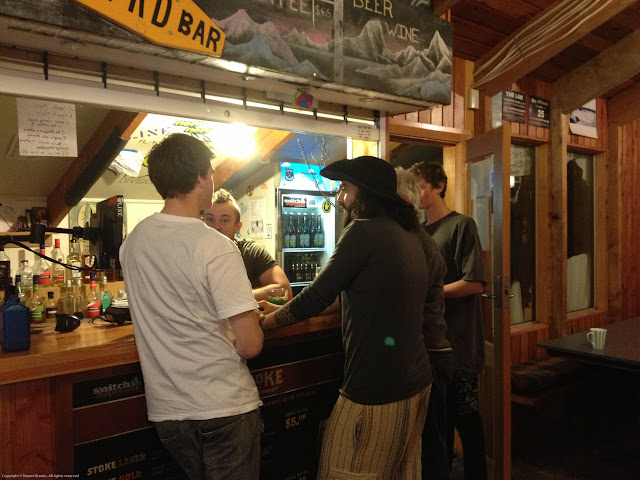 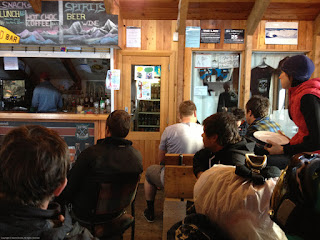 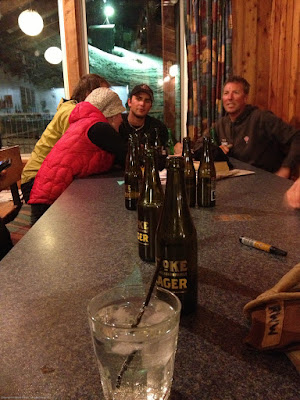 I even cooked sticky date pudding and shared my recipe with the chef!!

Olympus, the goddess will be back! 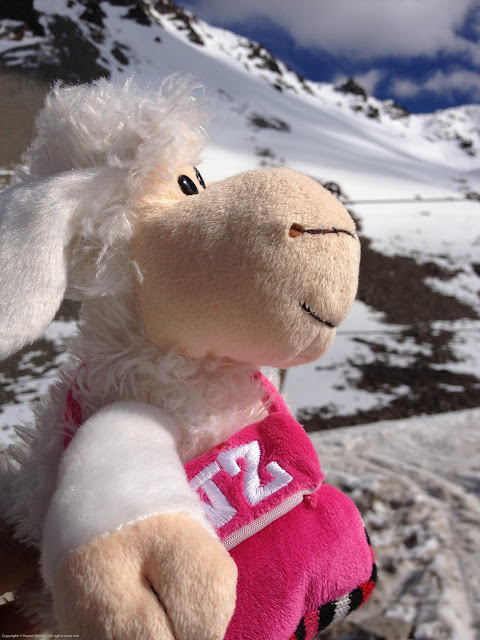